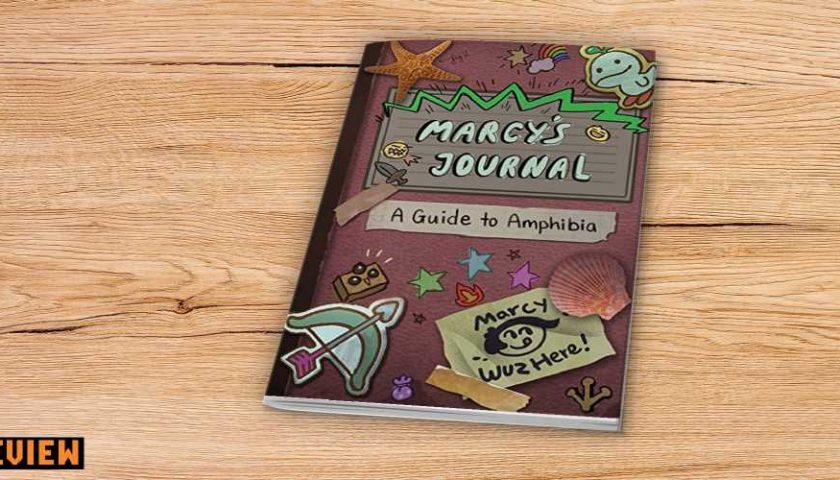 Marcy’s Journal – A Guide To Amphibia is way deeper than I ever expected it to be. This happy-go-lucky glimpse into the adventures of Marcy Wu, Anne Boonchuy, and Sasha Waybright, is also a surprisingly emotional character study that the animated series wasn’t always capable of providing in ten-minute episodes. Ample time is spent analysing the inner thoughts of the Calamity Trio, providing a nuanced perspective on major narrative beats that were once glossed over or left to our own interpretation. Now the show is behind us, we can appreciate everything this book achieves in a new light, and as a big fan, I was engrossed from the off.

Marcy Wu is a giant nerd, and never has that been more clear than amidst the pages of her adorable little journal. Every other sentence is filled with references to classic JRPGs or her favourite anime, passions bleeding through her adventures across Amphibia as insecurities that once held her back in the human realm are now boons to be celebrated. Fans have long labeled her as neurodivergent representation, and she all but acknowledges this fact in each entry as she admits to her difficulty with socialising, a clear hyperfixation on reuniting with her friends, or becoming a hero that mirrors the media she grew up with. It’s equal parts tragic and heartfelt, acting as a sense of wish fulfillment for a story that long went untold.

It feels like Matt Braly, Adam Colas, and Catharina Sukiman watched Marcy’s Theme Song Takeover and decided to take its disparate adventures and turn it into a sprawling narrative, one that gives robust personalities to characters who once only ever appeared in a random scene, making us care about them on a similar level to Sprig or Polly. It can be easy to forget that Marcy and Sasha didn’t just exist on the sidelines until Anne stumbled across them, they were fighting for survival amidst Amphibia much like she was, and came to their own justified conclusions about what this world means to them and whether they could make it their own. 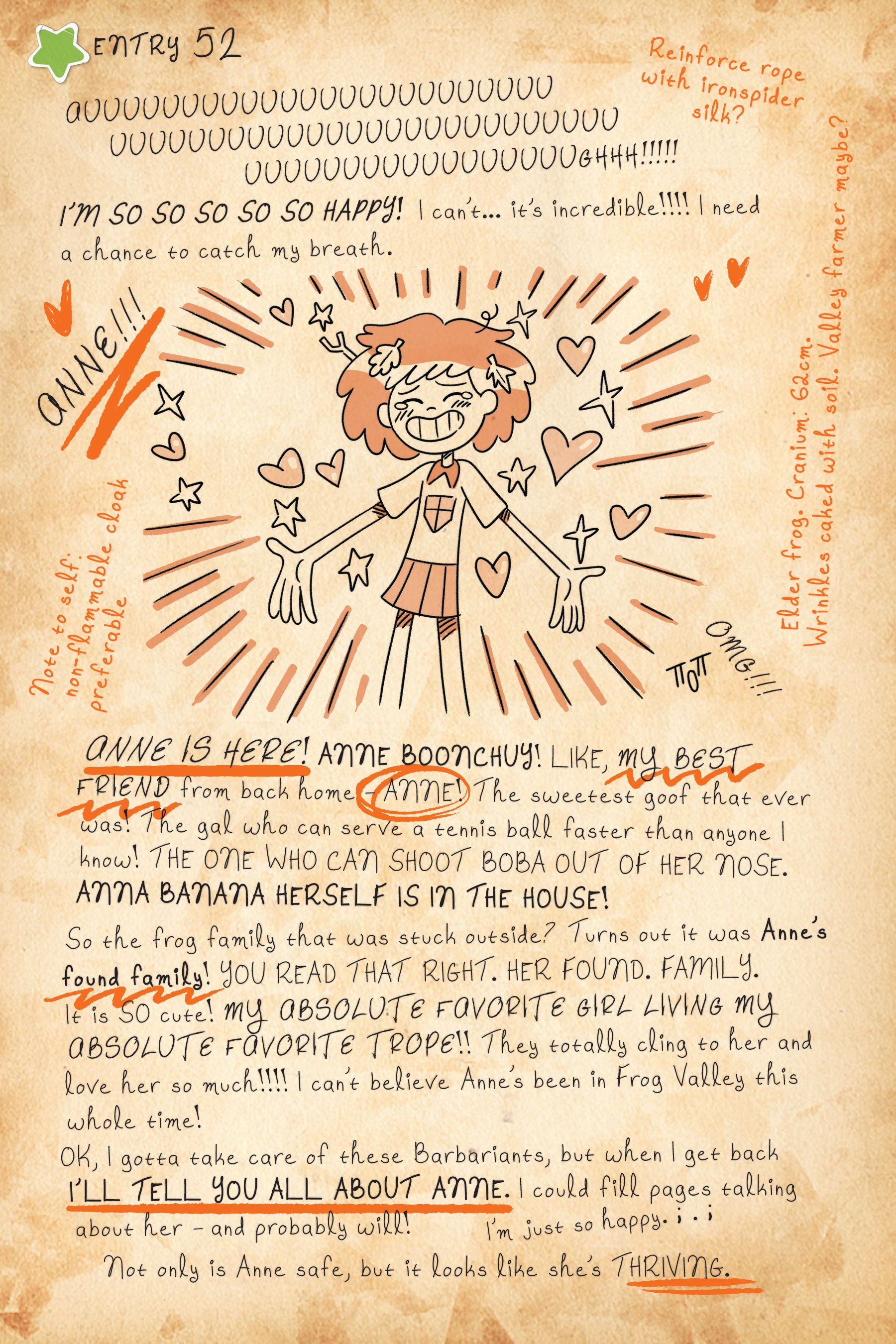 Marcy doesn’t want to return home, habitually bringing up her parents moving away and betraying her trust, even making comparisons to villains who made similar decisions as she tries in vain to justify her own selfish mistakes. Watching as her handwriting devolves into a panicked scrawl when it’s clear her mindset is fading away is strangely emotional given how lighthearted this journal can be. The majority of pages are filled with cute observations and contemporary memes that make it very clear that Marcy is a chaotic zoomer, and one who takes pride in new discoveries and having a clear goal to work towards. This could have been a relatively dry delivery of prose and I still would have been enamoured with it, but all the individual doodles and gorgeous illustrations provide it with an unparalleled charm.

Marcy’s journey runs concurrently with Anne and Sasha’s, and we begin from her first steps into Newtopia and watch as she becomes Captain of the Night Guard before landing a sweet gig as King Andrias’ trusted advisor. Lady Olivia and General Yunan are introduced from a new context with extra nuggets of character development, while there is an awful amount of foreshadowing into the events to come that our heroine is far too innocent to notice. Yet it all feels just right, adding an extra layer of detail to Amphibia’s world. The show always delivered emotional beats, but its structure wasn’t built to pile on this amount of narrative in such a short amount of time. Of course, Marcy still finds time for fun little excursions, but each entry functions as a way to build up her character in ways we’ve all been waiting for. 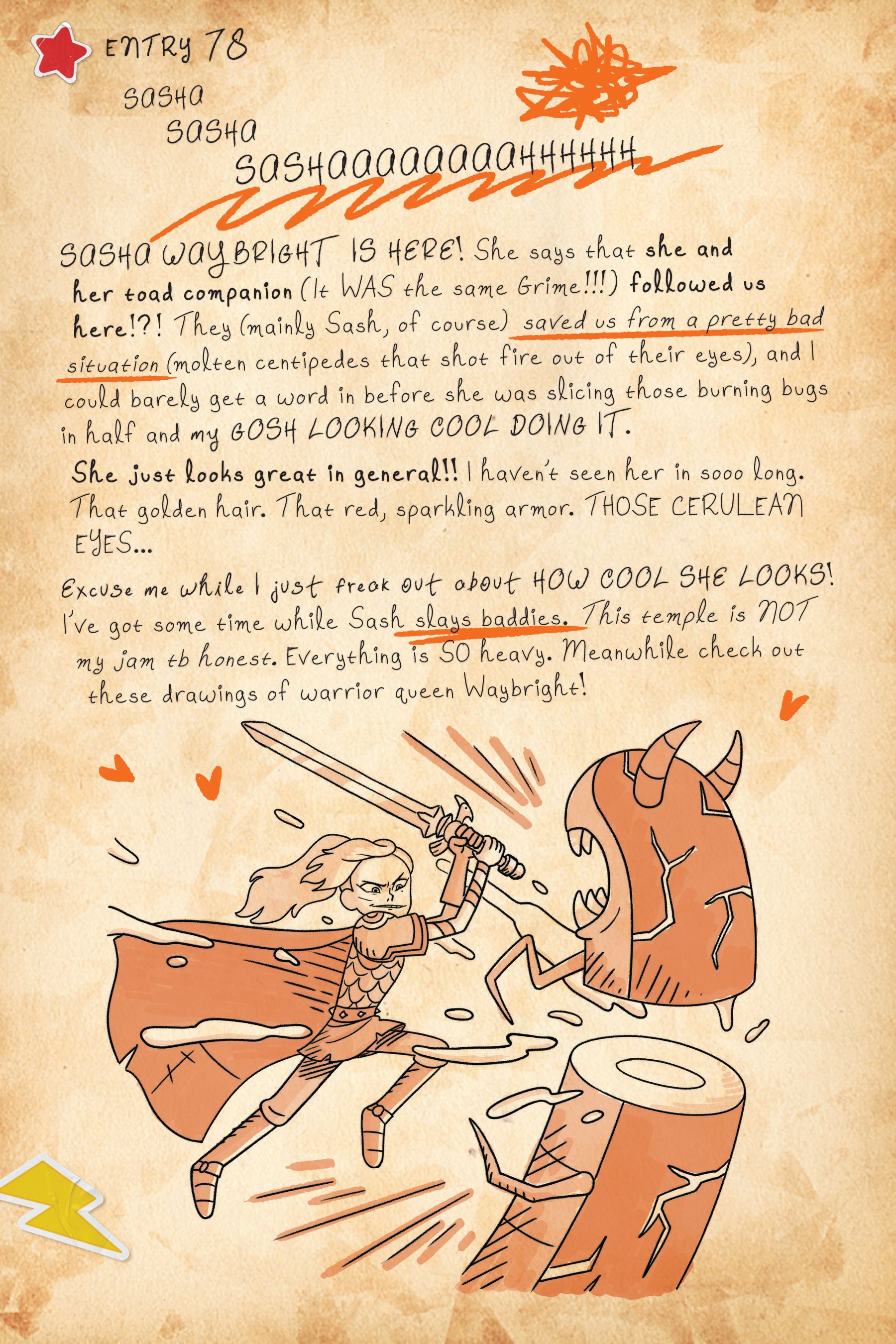 The additional scenes of Marcy embarking on quests and defeating ancient creatures using her cunning knowledge are fantastic additions to Amphibia’s mythos, with each and every illustration feeling like they’ve been pulled from frames of the show, albeit with a handcrafted feel perfectly befitting of our mischievous weeaboo protagonist. While these extra moments are all excellent, my personal highlights came in the form of existing scenes viewed from a new perspective. Marcy first reuniting with Anne at the gates of Newtopia is entirely different in its execution this time around, the excitement of finding her friend tinged with an element of selfishness as she befriends her found family and fears she’d rather be with them instead.

Marcy risked everything to bring Anne and Sasha to Amphibia, and either of them refusing to join her side when reuniting means it was all for nothing, and she’d thrown their lives away with no way of repairing them. Even when the music box comes into conversation, Marcy is almost apprehensive in getting it working, far more interested in seeing what other worlds are out there instead of returning to Earth. The journal assumes prior knowledge of the show’s biggest twists, especially knowing that Marcy was lying the entire time and had the primary goal of stranding everyone in Amphibia for good. Yet a core theme of this journal is forgiveness, and the acknowledgment of making up for mistakes you made with the best of intentions. Anne, Marcy, and Sasha all make missteps throughout, but the overriding message is how we need to accept our own shortcomings and learn to live with them. 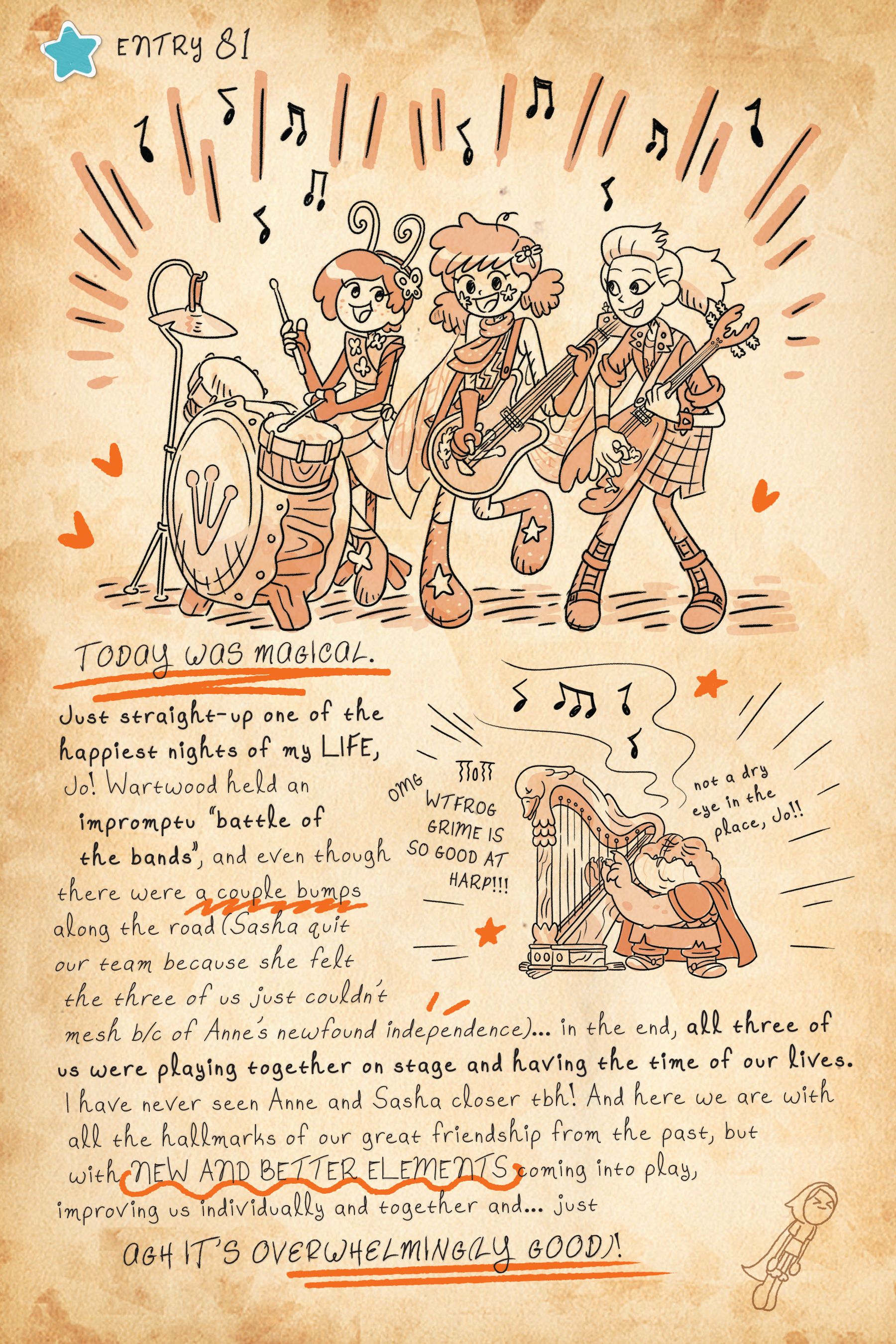 I’m tip-toeing around spoilers in fear of ruining the experience for readers, because the journal actively recontexualises the final season of Amphibia, and it shines brighter than ever as a consequence. The tome changes hands at one point, with Anne taking over as scribe in the wake of Marcy’s apparent death at the end of True Colors. She was weirdly indifferent about all of this trauma in the show itself, but the journal examines the inner thoughts of a girl who was hiding so much away in the fear of breaking down. The struggles are apparent, but there is also joy to be found in returning home to her family.

Anne talks about her mother’s struggle as a first generation immigrant, how her friend’s parents coped while she was away, and how exactly she is going to fix things. I won’t talk about where the timeline goes and what other surprises await, but there are ever so subtle hints to the future of Amphibia that I will be clinging onto with all my heart. Things are clearly left open to interpretation, meaning I could ship the Calamity Trio however I wanted and view Marcy’s admiration for the finer (read: nerdier) things and how it comes to influence her view on friends, family, and finding her place in the world. 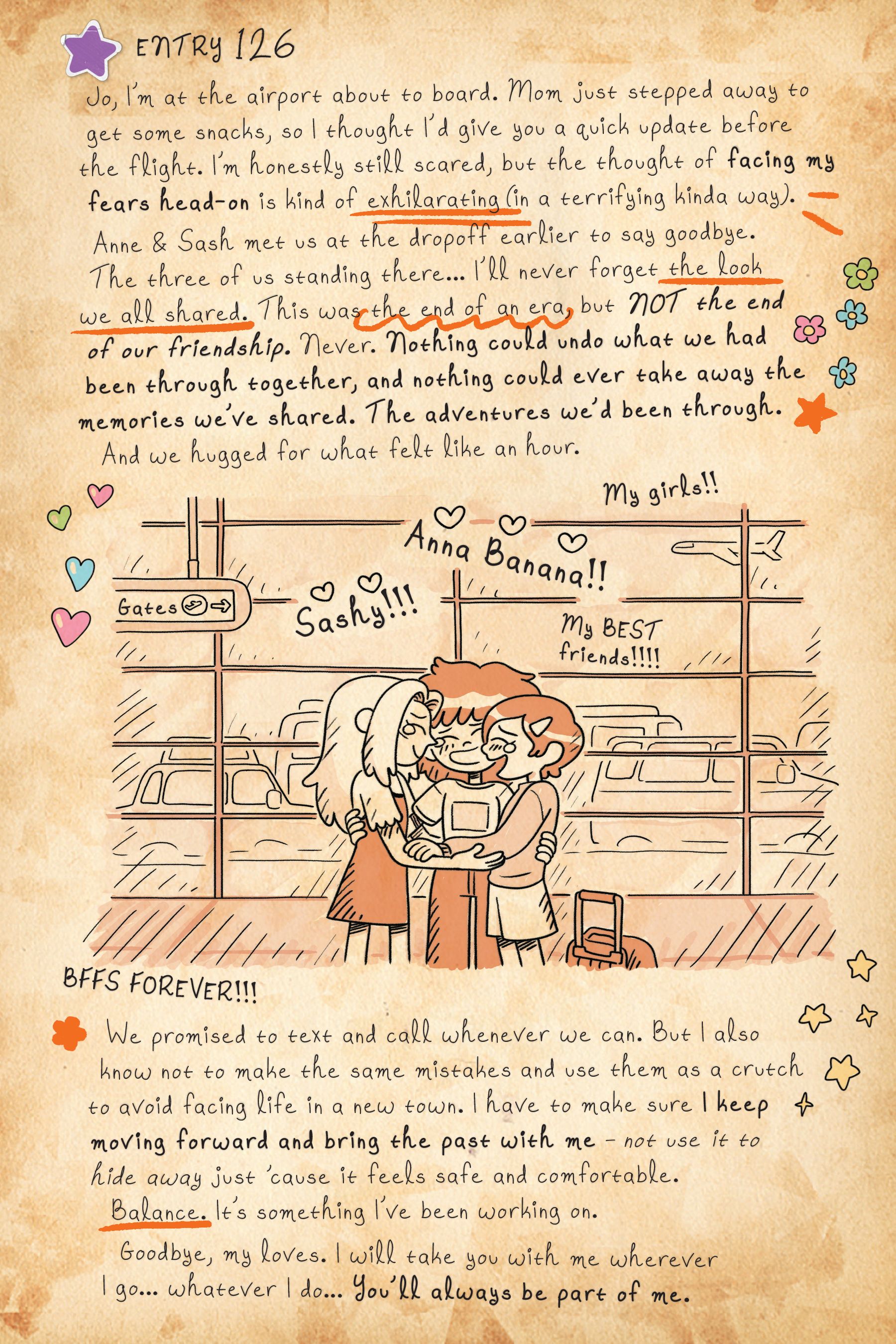 Marcy’s Journal is a delightful little snapshot into events we are already keenly familiar with, but shown in a new light that makes them feel fresh all over again. Its charming illustrations, sharp writing, and clear love for the universe in which it resides made every page a treat. It remains unclear what the future holds for Amphibia, but if this acts as our final farewell to the world and characters we’ve fallen in love with, I can’t think of better terms to part ways.