Historically, each of Magic: The Gathering's comedically focused sets such as Unglued, Unhinged, and Unstable have each featured silver-bordered cards. This feature of a silver border denoted cards as being authentic cards whilst preventing them from being legal in any of the game's formats. However, with the release of Unfinity, Magic: The Gathering's comedy set features cards printed in the regular black border. While the vast majority of cards in this set retain the same lack of legality as cards from previous "Un-sets," some rares in the set are uniquely legal in eternal formats such as Commander.

These cards can be noted by their lack of the acorn-shaped stamp featured on non-legal cards. As several of these legal Unfinity cards are legendary creatures, this means that they're brand new fully legal options for those looking to build decks within the Commander format. So we're going to examine the Commander-legal legends of Unfinity and see which are the most worth constructing a deck around! 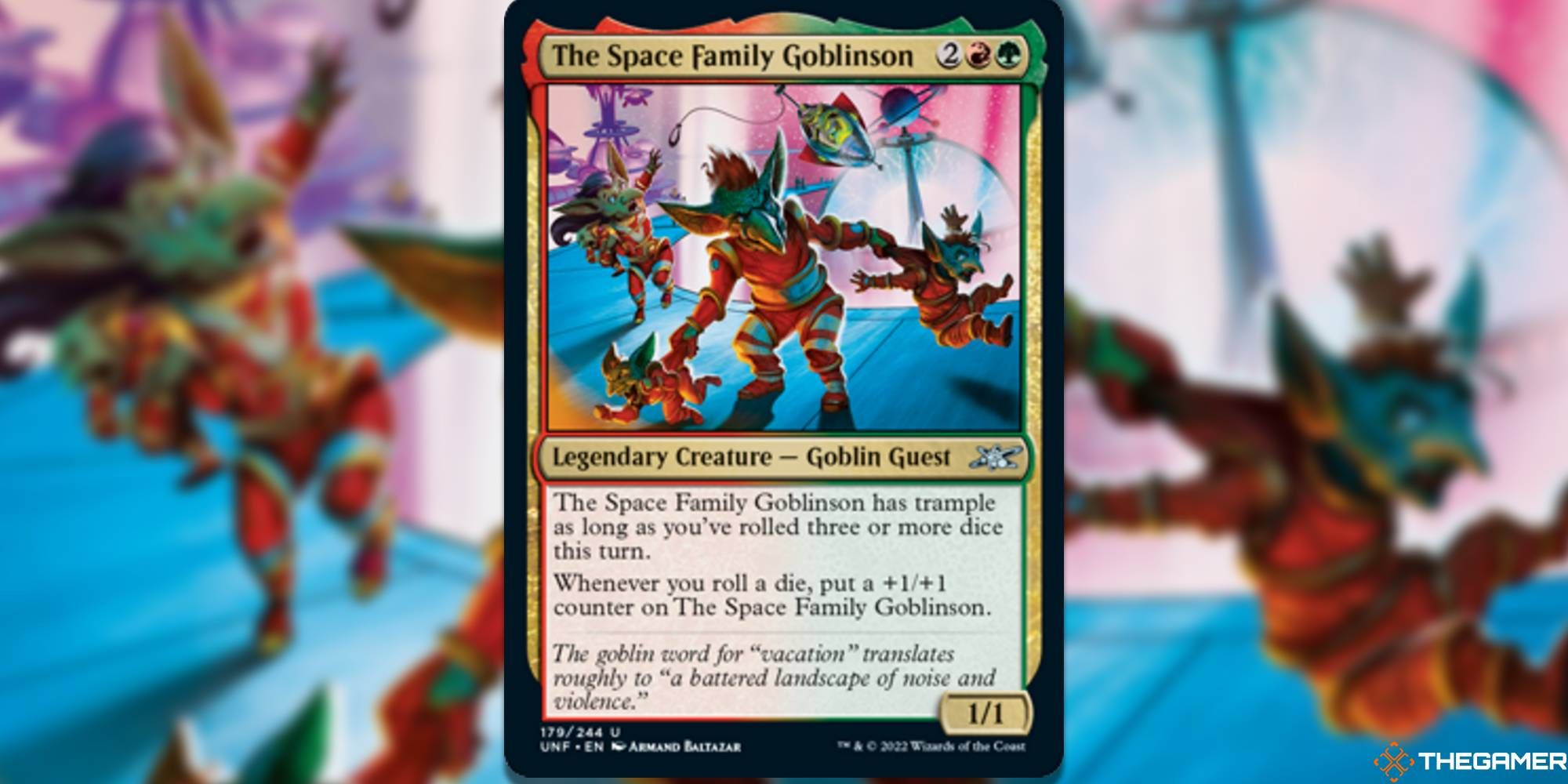 One of several new options for commanders that incentivize the use of dice rolling, The Space Family Goblinson is a Gruul (green/red) commander that provides you with benefits based on how frequently you roll dice.

A 1/1 Goblin Guest for four mana, with enough dice-rolling cards, this creature can grow quite massive, as whenever you roll a dice, a +1/+1 counter is put on it. In addition to being a serviceable offensive threat, this creature is capable of pushing its own damage through to your opponents, as it gains trample if you've rolled three or more dice in a given turn. 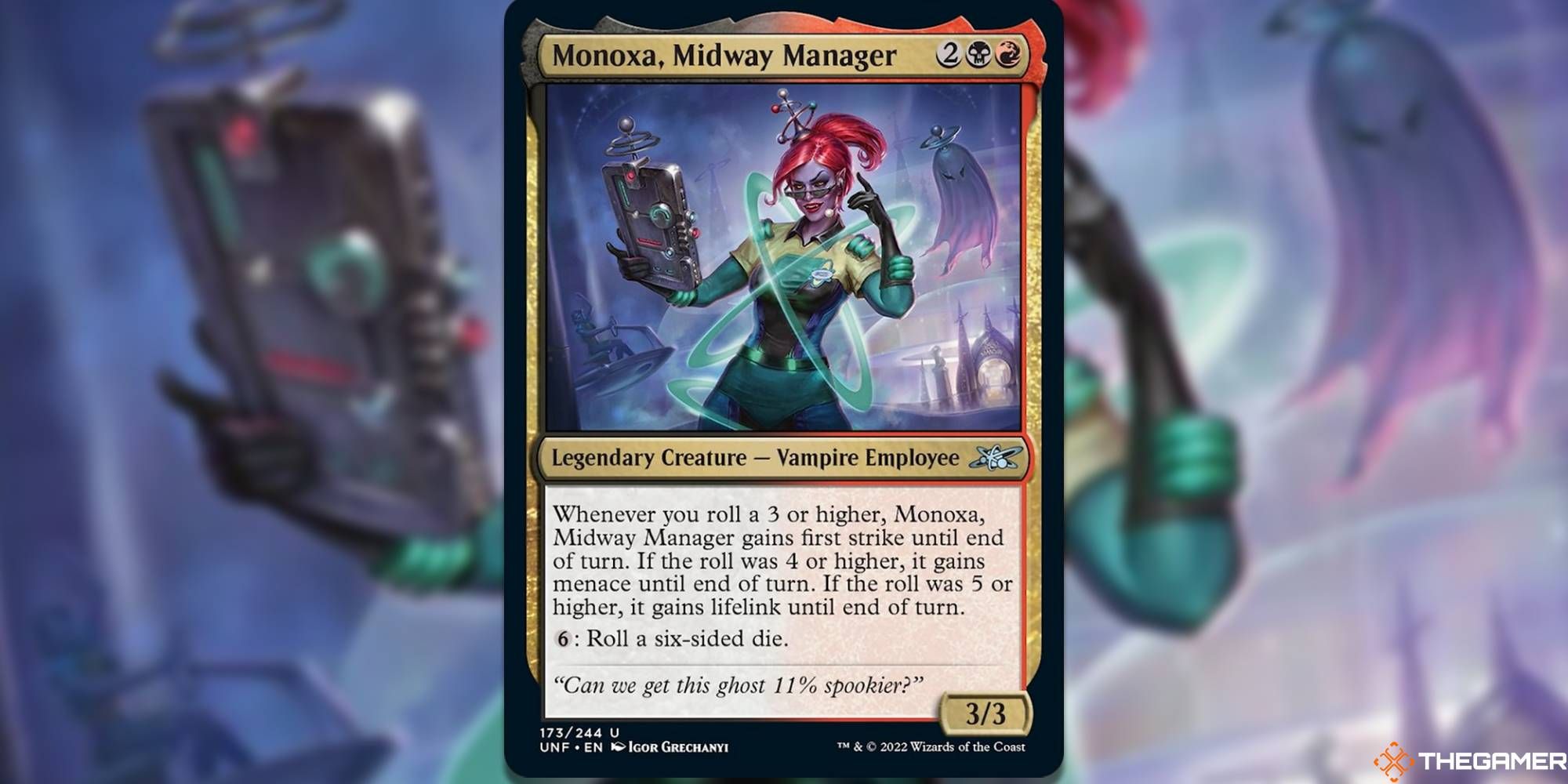 Another option for a dice-rolling commander deck, Monoxa, Midway Manager puts a Rakdos (black/red) spin on the archetype while ensuring that you always have a means of rolling dice. For four mana, this Vampire gains keywords including first strike, menace, and lifelink based on the results of dice you roll. While this provides this creature with some offensive utility, this card's selling point is that for the cost of six mana, you may roll 1d6. When paired with effects that are triggered by rolling dice, Monoxa provides a reliable means of having access to dice to roll whenever you may need them. 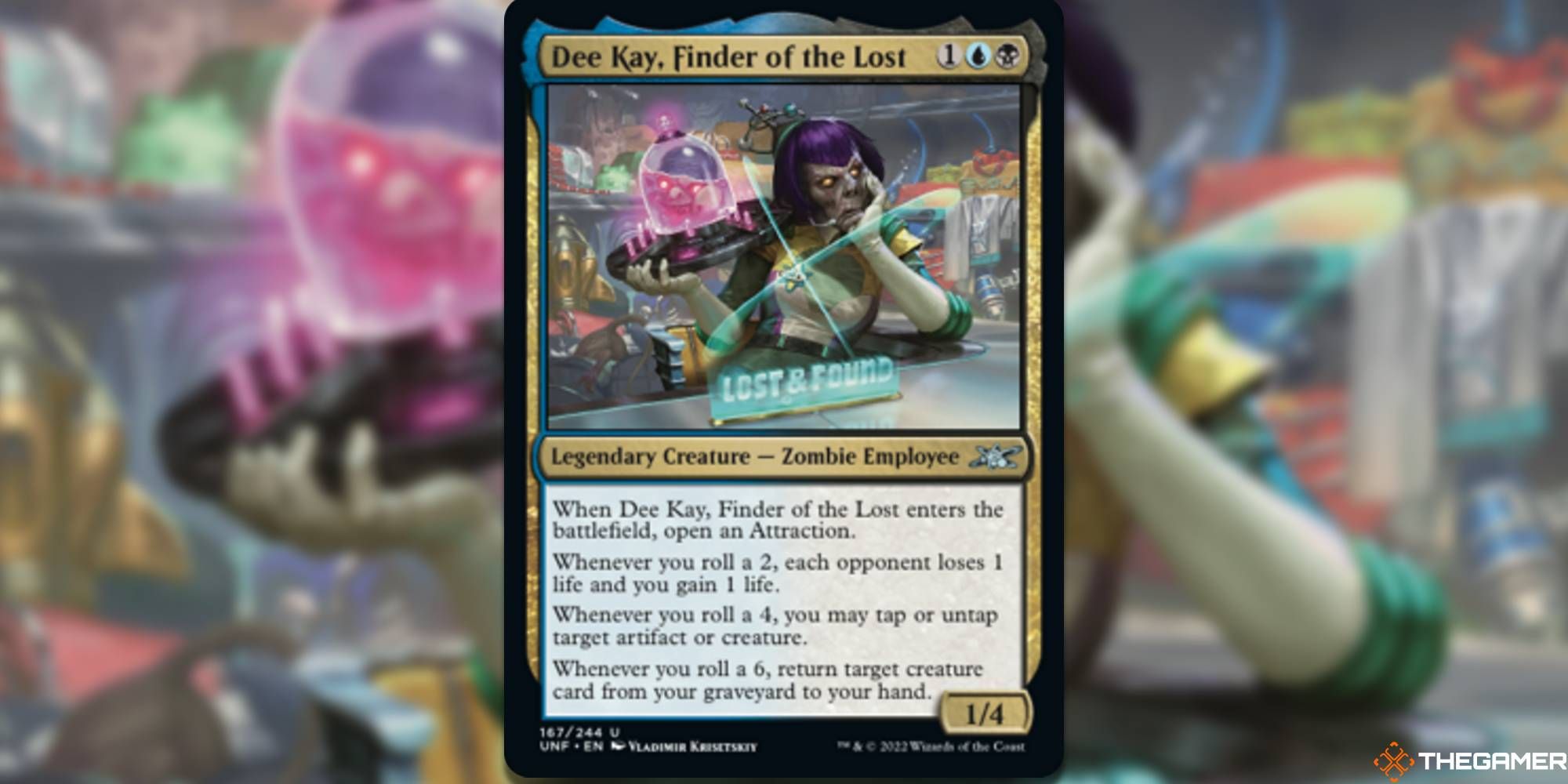 While Monoxa may be a great way to enable dice-based triggers, Dee Kay, Finder of the Lost is a great Dimir (black/blue) payoff to having access to a significant number of dice-rolling effects in your deck. For the low cost of three mana, when Dee Kay enters the battlefield, you open an attraction, immediately providing a means of rolling dice.

Dee Kay has access to three triggered abilities that provide effects when a two, four, or six is rolled on a dice, incentivizing the use of effects that use smaller dice rather than a d20. Though her ability to drain one life from opponents is somewhat lackluster, this creature's ability to untap permanents you control can provide mana ramp when targeting mana rocks, while its ability to return creature from the graveyard to your hand can serve as repeatably accessible recursion. 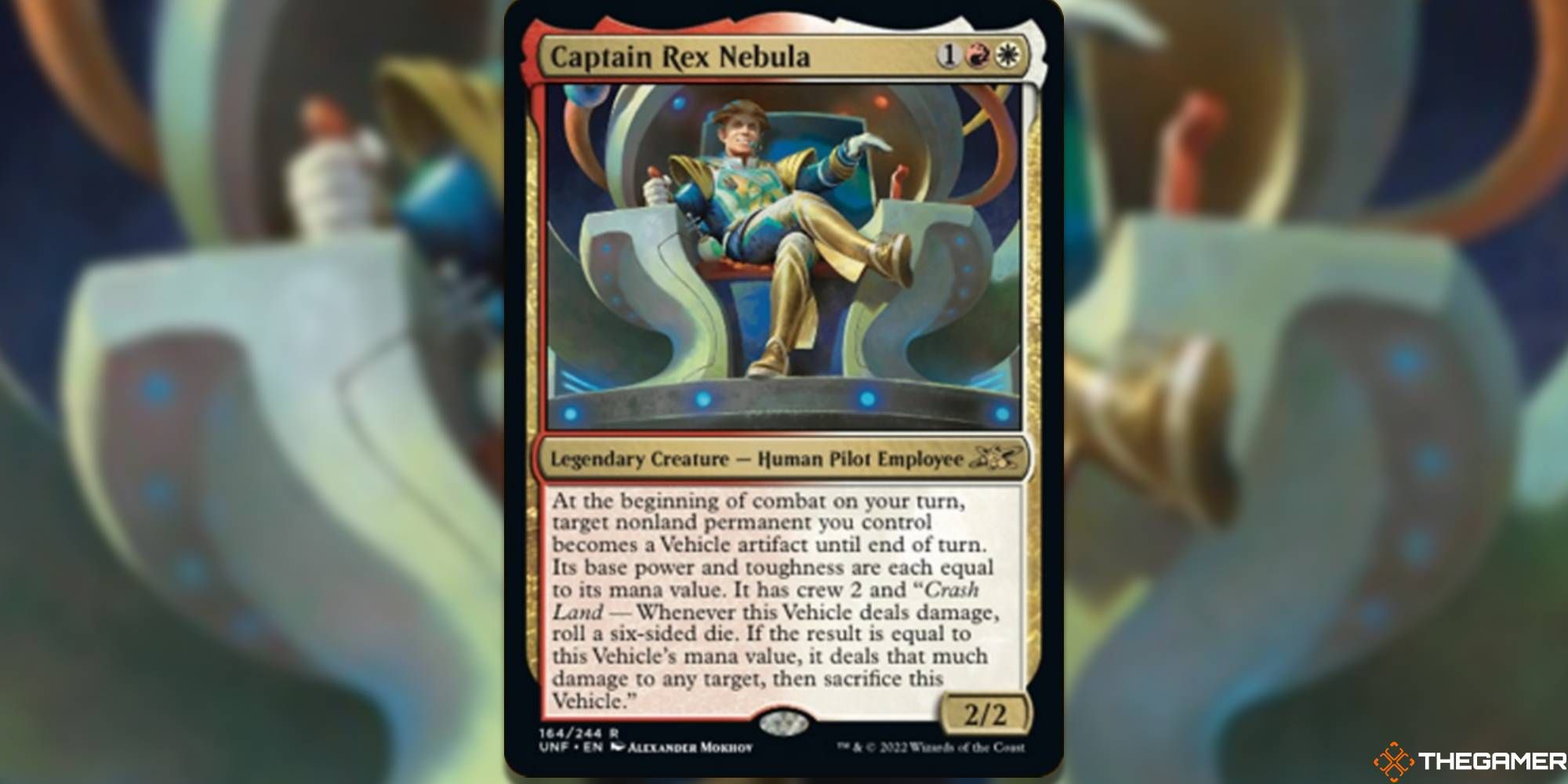 While Depala, Pilot Exemplar has long served as the default commander option for Boros (red/white) vehicle decks, Captain Rex Nebula is a new commander that puts a fun and destructive spin on the archetype. A 2/2 for three mana, Captain Rex Nebula has the incredibly unique trait of being able to convert any nonland permanent you control into a Vehicle with crew 2 and power and toughness equal to its mana value at the beginning of combat on your turn.

While this transformation into a Vehicle only lasts until the end of the turn, it can provide some offensive benefits to artifacts and enchantments. It's important to note that when using these vehicles created by Rex Nebula, you must roll 1d6 after they deal damage. If the result is equal to the Vehicle's mana value, it's sacrificed, dealing damage equal to its mana value to any target. Though this can force yet even more additional damage into your opponents, it also adds an additional layer of risk, as you could potentially lose out on a key card to your strategy. Luckily, as Boros has gained access to its fair share of reanimation in the form of cards like Osgir, the Reconstructor, there are several ways for a Rex Nebula deck to mitigate this loss.

3/7 The Most Dangerous Gamer 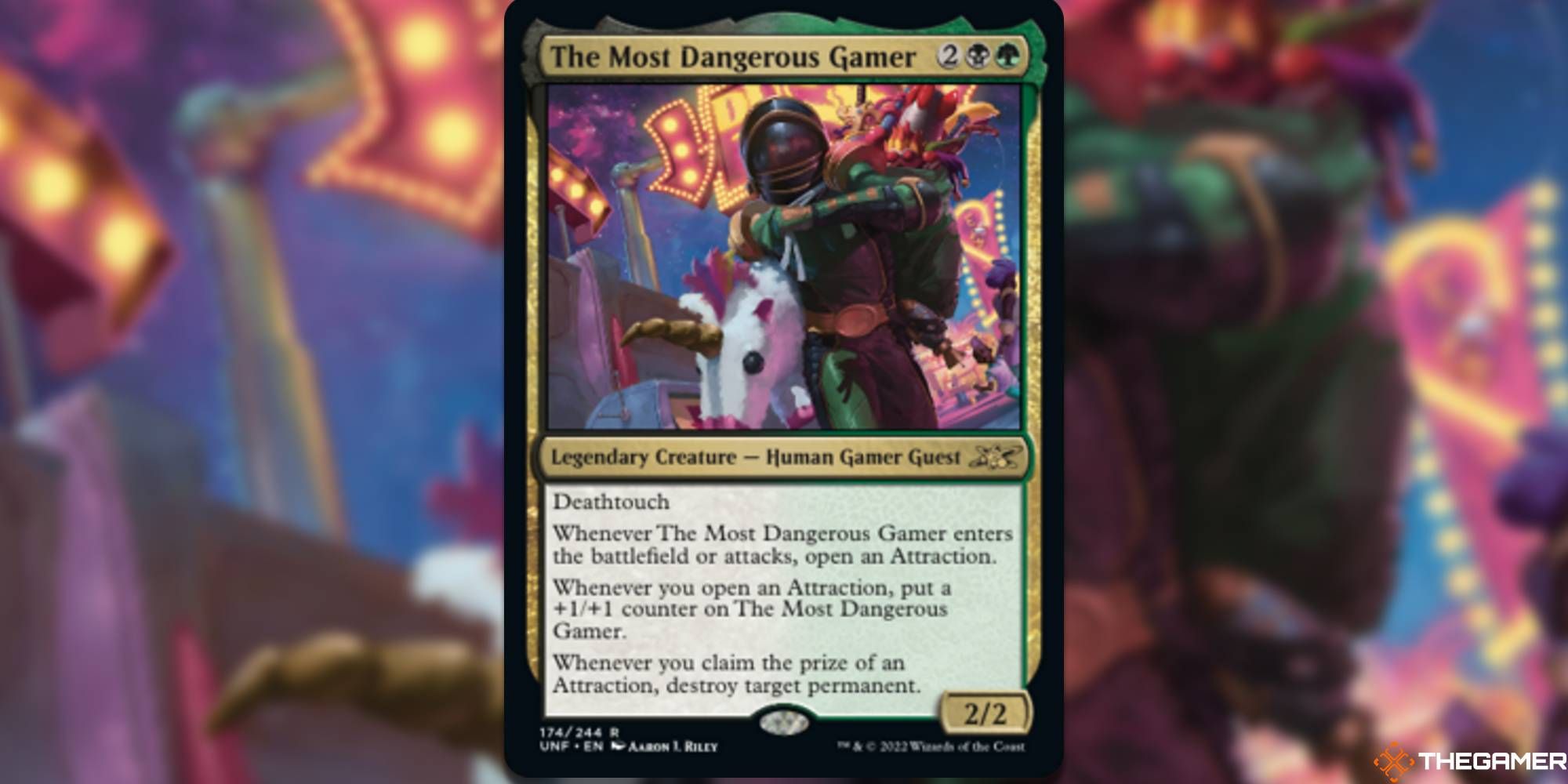 A Golgari (black/green) creature for four mana, The Most Dangerous Gamer is a commander that serves as the premier option for those looking to construct decks around Unfinity's unique Attractions mechanic. Comparable to Contraptions from Unstable, Attractions are special artifacts that rather than being cast through traditional means, are kept in their own deck, being put directly into play from atop their controller's respective attraction deck when an ability would cause you to "open an attraction." These special artifacts make use of dice, allowing you to roll for their respective effects during your upkeep.

A 2/2 Human Gamer Guest (yes, that's its real creature type) with deathtouch, whenever this creature enters the battlefield or attacks, you open an Attraction, allowing you to have consistent Attraction access through combat. Though its size may seem small, whenever you open an attraction, a +1/+1 counter is put on The Most Dangerous Gamer, allowing it to grow whenever it attacks. Additionally, this creature can serve as a flexible source of removal, as whenever you claim a prize (the act of completing an Attraction), you may destroy any target permanent! For those looking to make use of mini-games and roll dice, The Most Dangerous Gamer may be a commander worth considering. 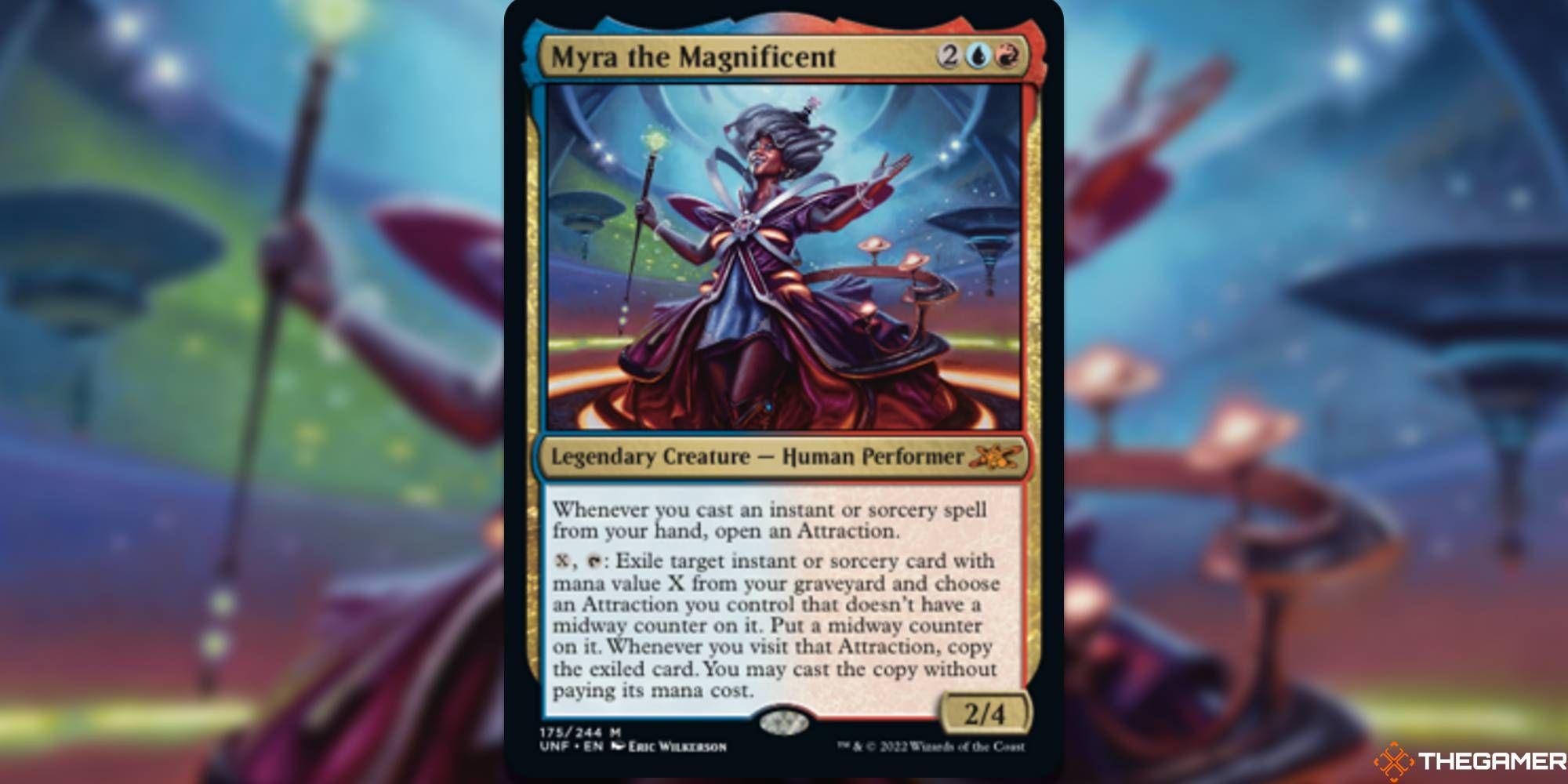 Myra the Magnificent is a powerful Izzet (blue/red) commander option that blends the use of Attractions with spell-slinging synergies that make use of instants and sorceries. A Human Performer for four mana, whenever you cast an instant or sorcery, you open an attraction. Like the Most Dangerous Gamer, this provides Myra with the ability to reliably open an Attraction each turn, whilst more reliably allowing for more than one attraction to be opened within a given turn. Once several instants and sorceries have been cast and a sizable number of Attractions have been put into play, Myra can even make additional use of these previously cast spells through her activated ability.

For the cost of X, with X being equal to a spell's mana value, Myra can be tapped to exile an instant or sorcery from your graveyard, putting a Midway counter on one of your Attractions. Once this counter has been added to an attraction, whenever that Attraction is visited, the exiled card may be cast without needing its mana cost to be paid, allowing for powerful spells to be repeatedly cast each turn!

1/7 Magar Of The Magic Strings 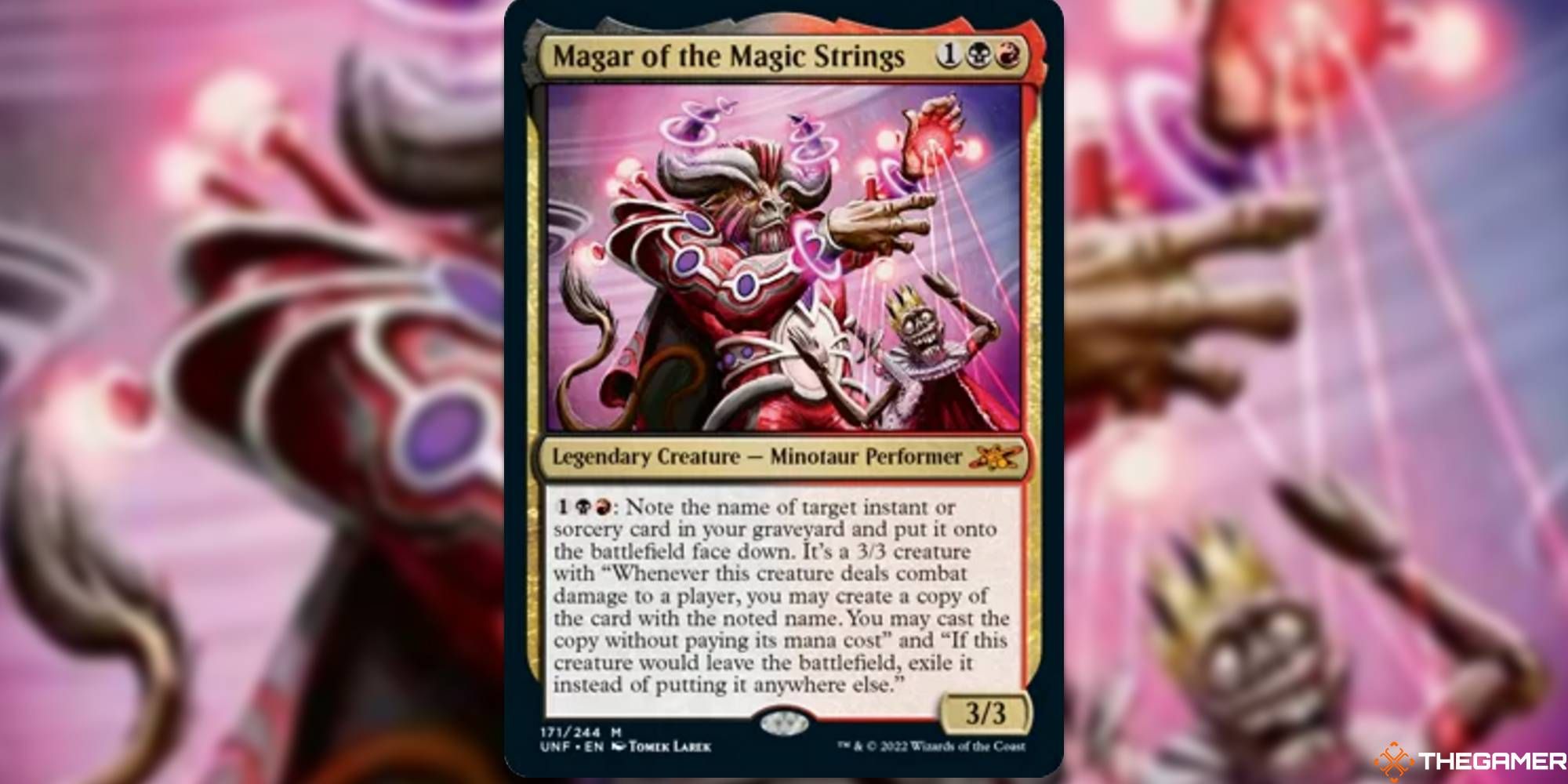 Magar of the Magic Strings is an incredibly distinct take on a Rakdos spell-based commander, and a powerful option that is likely to become a popular option in the format. A 3/3 Minotaur Performer for three mana, Magar has access to an activated ability for three mana that allows you to return an Instant or Sorcery to the battlefield faced down as a 3/3 creature.

Whenever this face-down instant or sorcery deals combat damage to a player, you may cast a copy of it without paying its mana cost. This means that if you're capable of ensuring these cards are capable of sneaking past an opponent's defenses, you can theoretically cast several of the same spells each turn, potentially accruing absurd amounts of value.