The sequel to the beloved Double Masters reprint set is finally on the horizon. Packed with over 300 reprints, Double Masters 2022 has been highly anticipated by fans of Modern and eternal formats alike. Now that the full card list has finally been revealed, Magic players can breathe a sigh of relief in the knowledge that Double Masters 2022 won't disappoint.

Among the mountain of quality reprints are dozens of excellent Black spells, from EDH tribal staples to powerhouses that deserve a spot in any Black deck. Here are the very best Black cards in Double Masters 2022. 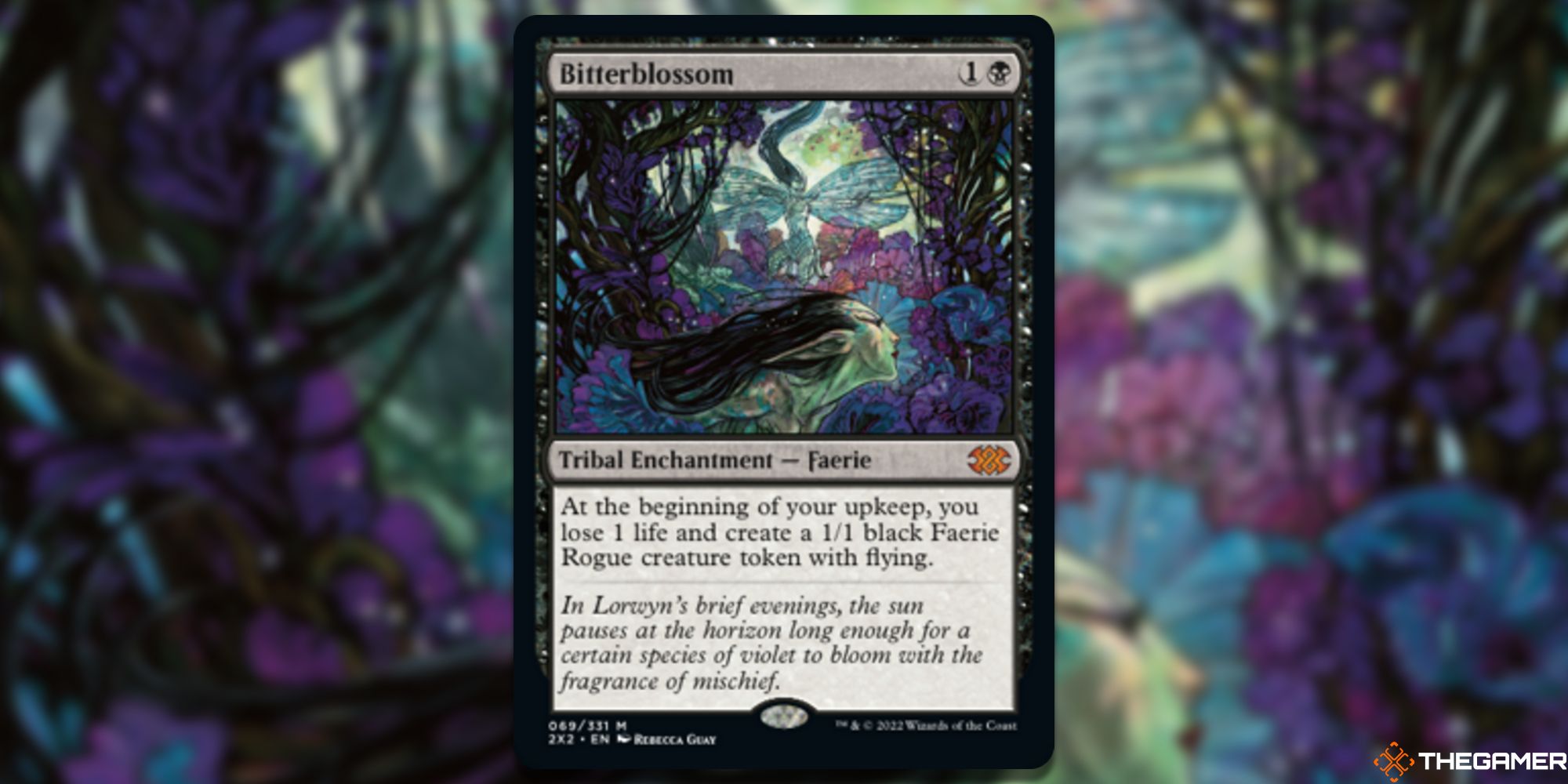 Bitterblossom is a versatile card that puts in a lot of work across many deck archetypes. While its day in Modern is long gone, it still appears in many Commander decks, ranging in power level from purely casual to oppressive stax.

Bitterblossom seems fairly underwhelming at first glance, but once you've played against it, you'll never forget the impact it can have on a board state. Paired with cards like Anointed Procession and Doubling Season, Bitterblossom turns into a token-creating machine that is extremely difficult to remove.

While Bitterblossom fits nicely into many different Commander decks, it's found most commonly in Faerie tribal decks such as Alela, Artful Provocateur. It's in these decks where it really shines, acting as part of the deck-wide Faerie creating engine. 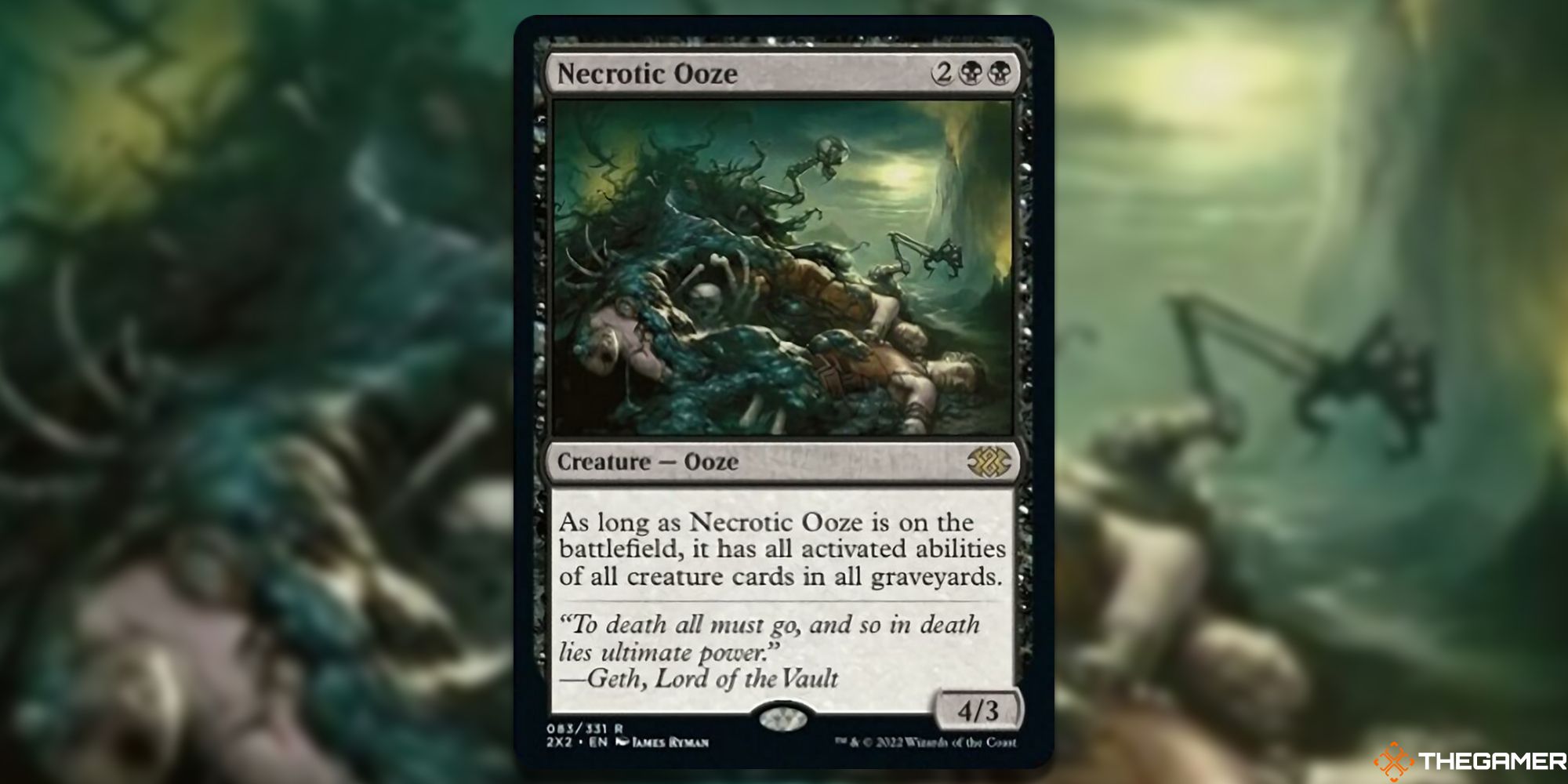 Necrotic Ooze is an incredible card when played at the right moment. In Commander games with four full graveyards, Necrotic Ooze can do just about anything. As well as a usually excellent ability, Necrotic Ooze finds a special home in Golgari EDH decks, where the entire deck is working to put more and more cards in your graveyard.

The one drawback to including a Necrotic Ooze in your deck is that it's essentially a vanilla creature in the early game, when the graveyards are still empty. For many players, however, this is a risk they're willing to take.

With the right cards in your graveyard, Necrotic Ooze can almost win the game by itself. Infinite mana is easy to produce with loops like Channeler Initiate and Devoted Druid, and infinite card draw can be achieved with Devoted Druid and Soul Diviner. Even without using infinite combos, Necrotic Ooze can turn into a game-ender if you cast graveyard-dumping cards like Morality Shift or Grisly Salvage.

Despite its inconsistency, Necrotic Ooze hits far more often than it misses and should be considered for any graveyard-heavy Golgari deck. 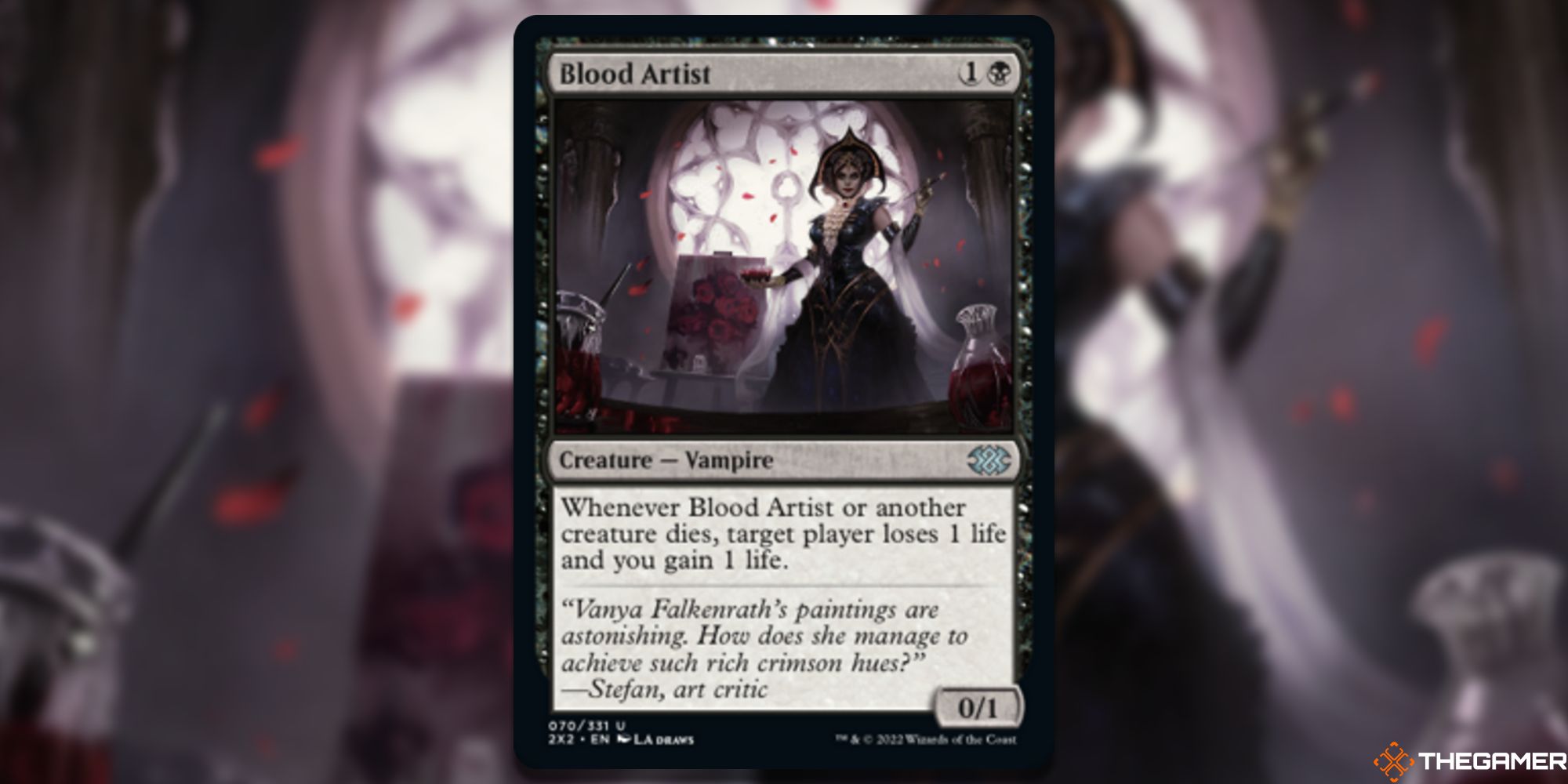 Blood Artist is the number one auto-include for all Aristocrats EDH decks, making it one of the most popular Black cards in the format. Two mana for such an easily triggerable effect makes it an easy fit into just about any deck that wants to sacrifice creatures, and the power ceiling of dealing damage every time something dies means that even competitive EDH players will include it.

In both casual and competitive Commander, Blood Artist is a great way to cap off a game with the death of your recently created infinite army. Hopefully this reprint will see this staple card become even cheaper. 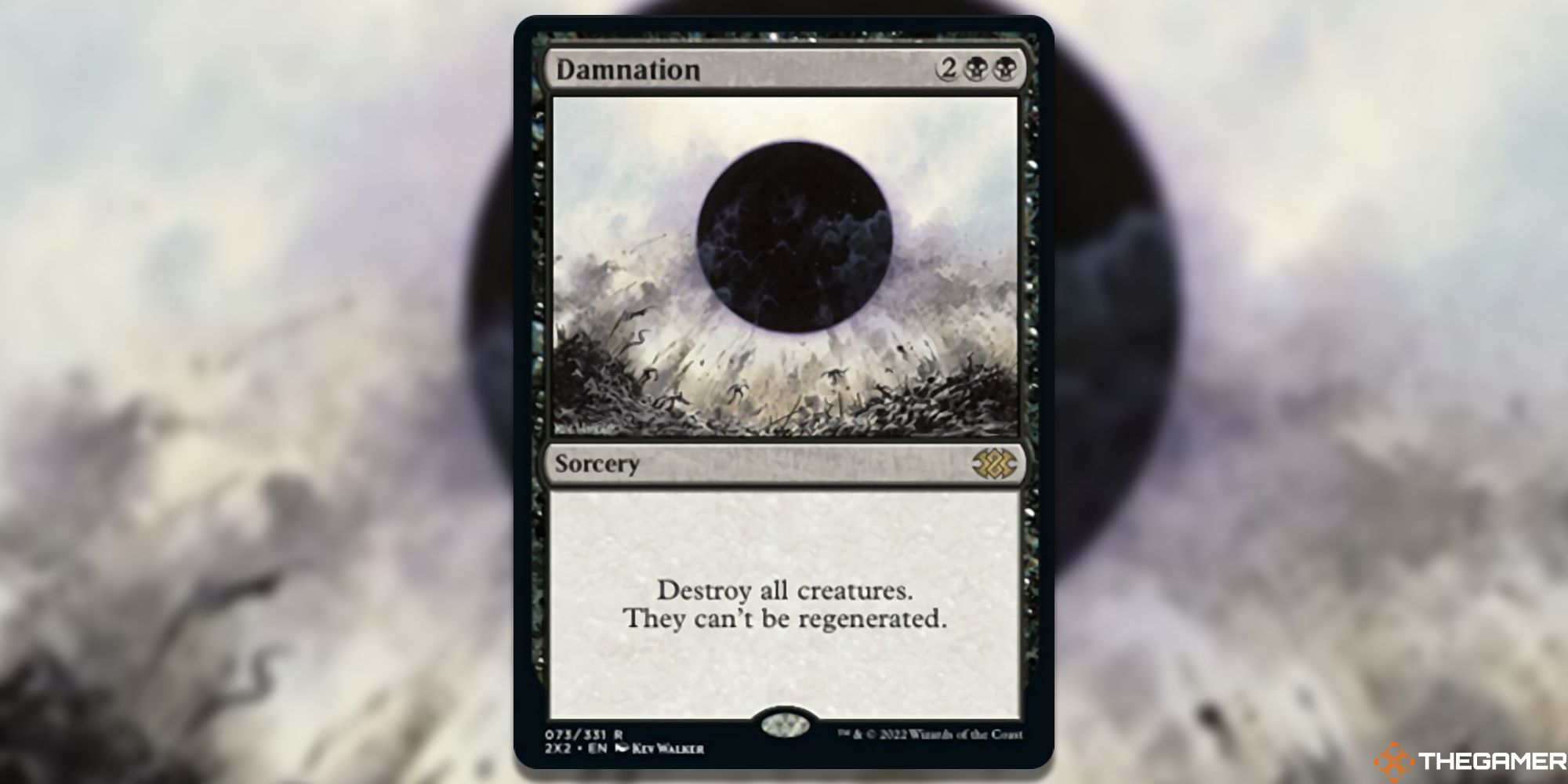 Damnation is an iconic card, so much so that it's one of the few Black reprints that kept its original artwork. The huge Black void at the center of its illustration is a perfect reflection of the card's effect – 'Destroy all creatures. They can't be regenerated.'

Aside from its awesome marriage of gameplay and artwork, Damnation also brings enough power to find its way into many Black EDH decks. Its low casting cost means that its all-sides creature boardwipe can hit the board in a variety of situations.

The fact that it affects your creatures isn't too bad of a downside for most Black decks, as you've probably got some ability triggers that will go off with each and every creature death. Damnation is a simple, strong, and versatile card. It's no wonder why it made itself into so many decks. 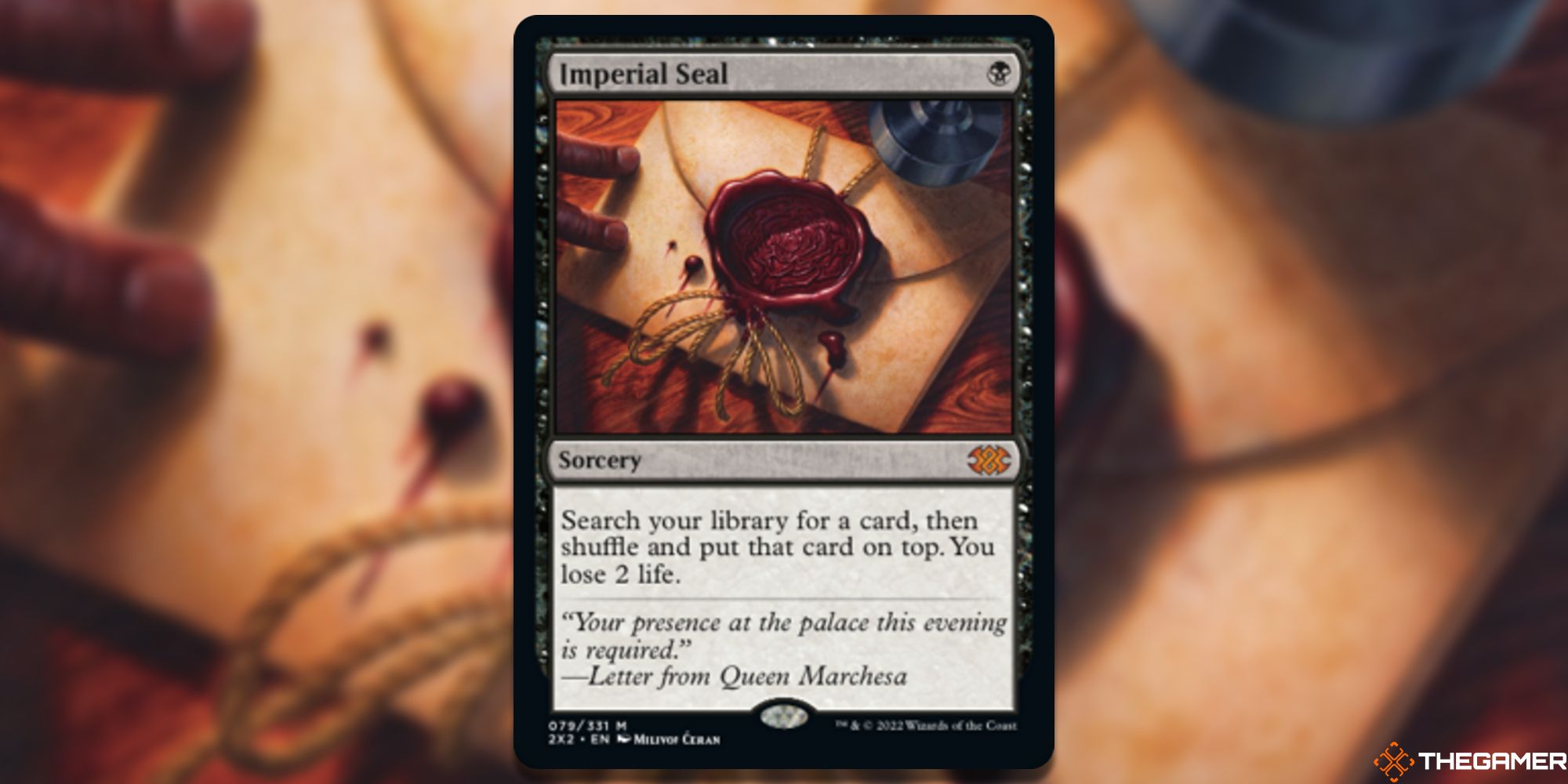 Imperial Seal's announcement during Double Masters 2022's preview season set the Magic player base alight. Not only is it the best Black card in the set by far, but it's also one of the very best in the entire set.

The last time that Imperial Seal saw a proper print (not including limited-run Judge promos) was all the way back in 1999's Portal Three Kingdoms. Needless to say, Imperial Seal was a long-awaited reprint and one that surprised a lot of players when it was revealed.

The only drawback to Imperial Seal's incredible effect is that it is at sorcery speed, which makes it slightly weaker than Vampiric Tutor, which has an identical effect at instant speed. This doesn't mean that Imperial Seal is anything less than amazing though. After all, there are worse things to be than a slightly weaker version of one of the best instants in Magic.