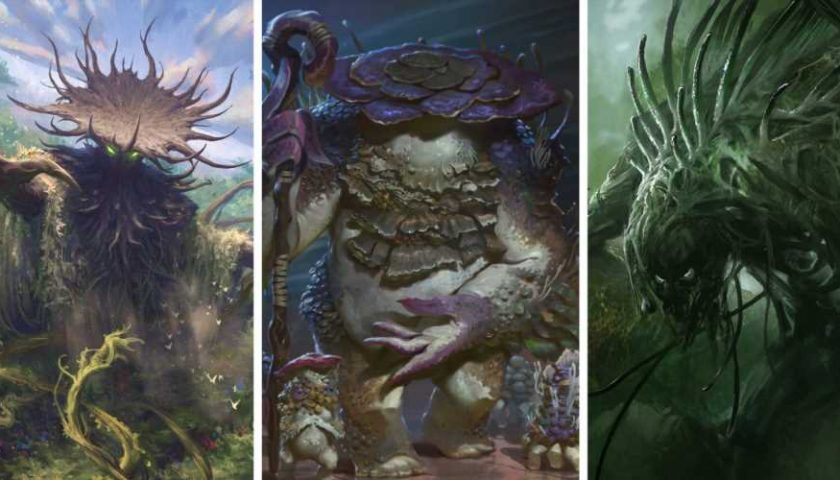 Saproling is one of the most easily-overlooked Creature types in Magic: The Gathering. Appearing exclusively as tokens, and boasting humble 1/1 stats, these fungus-based lifeforms have nevertheless received consistent support throughout the game’s history, making a dedicated Saproling deck not only viable but potentially extremely powerful in the game’s premier multiplayer format, Commander.

But which legendary creature should you choose to lead your Saproling swarm? There are a range of great options available, from those that create Saprolings, to those that make excellent use of them. So grab a shovel, and let’s dig in to the best Saproling commanders in Magic: The Gathering. 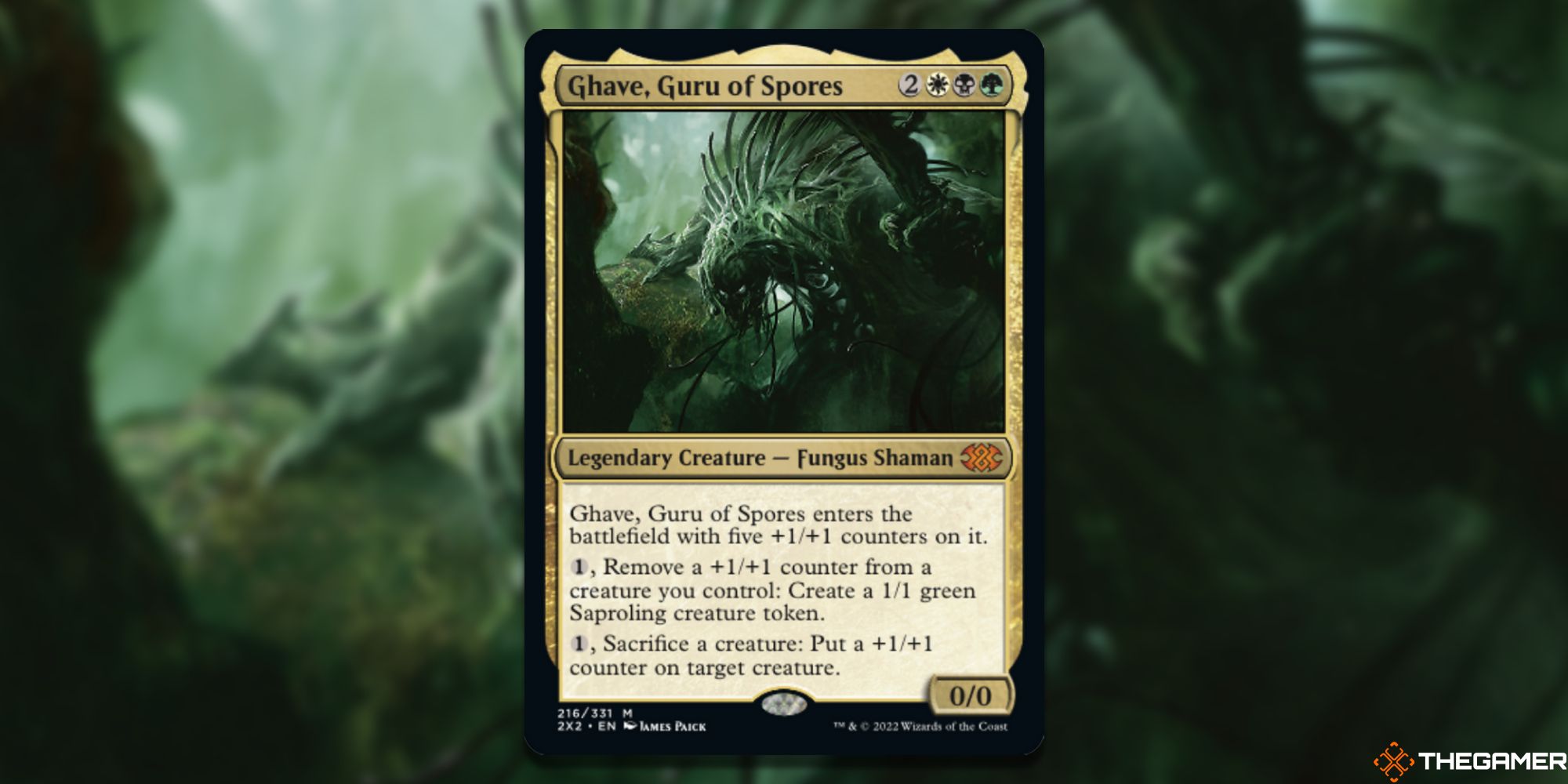 Ghave is a brilliant choice for a number of reasons. His Abzan (black, white, and green) colour profile, for one, gives you a huge range of deckbuilding options, encompassing nearly all the Saproling support cards. In addition, he’s also a commander that comes with, and makes use of, +1/+1 counters, a very well-supported mechanic that can quickly get out of hand in a multiplayer setting.

Once you’ve built up a suite of counters, on Ghave or elsewhere, you can cash them in using his first ability to create Saproling tokens. Later, to avoid a board wipe or just to switch gears, you can sacrifice those Saprolings to Ghave’s other ability, placing +1/+1 counters on other creatures you control. It’s the circle of life, and it’ll certainly move your opponents (to tears) as you seamlessly transition between going wide and going tall as needed, using both of Ghave’s abilities. 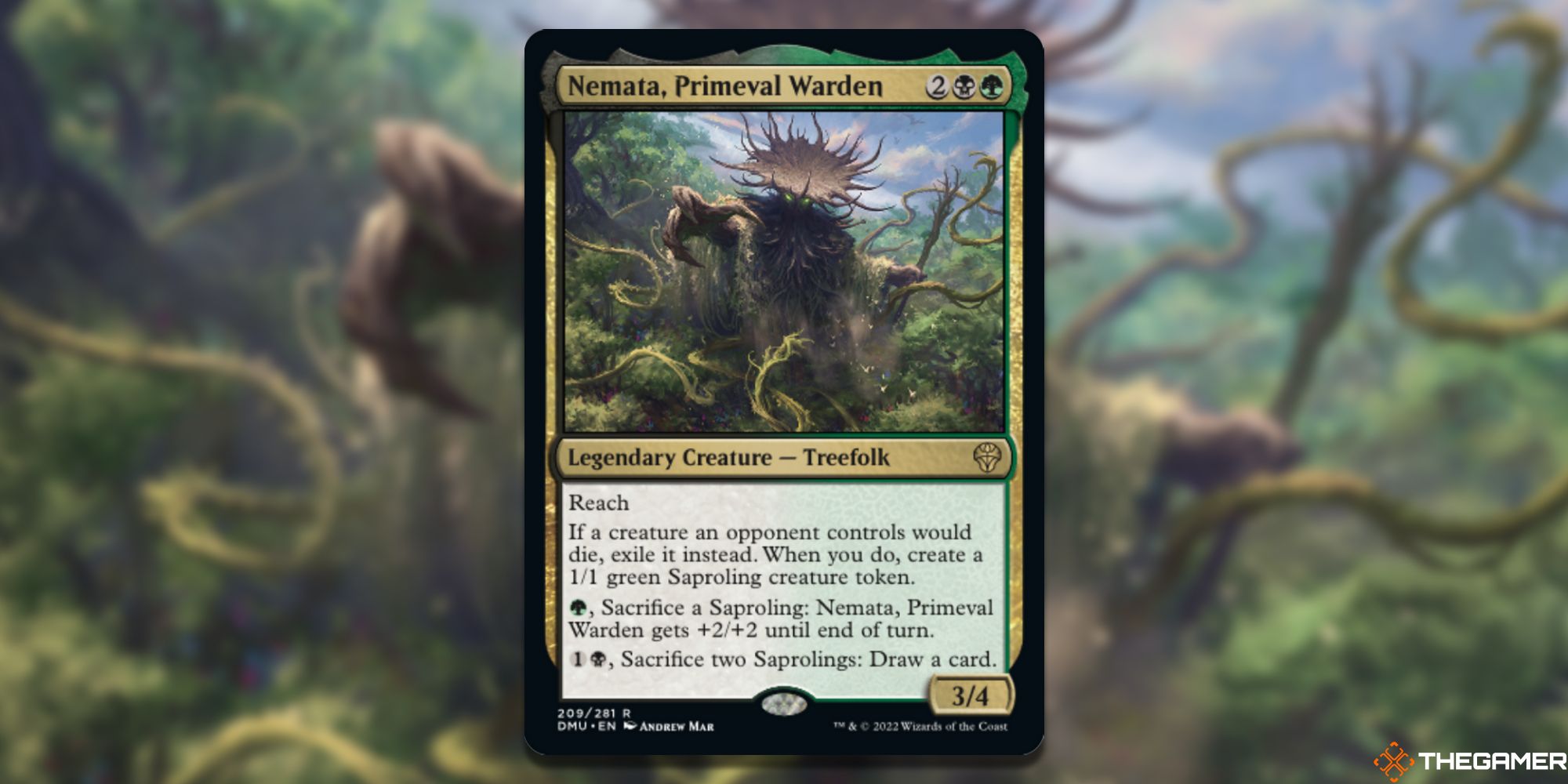 Graveyard shenanigans are one of the most common sources of sudden, unexpected defeat in Commander, and Nemata gives you a great way to circumvent these with his passive ability, exiling creatures under your opponent's control rather than letting them rest easy in their graves. Each time this happens, you’re rewarded with a complimentary Saproling token; an effect which, given the range of one-sided board wipes available in Commander, can easily build you an army on the spot.

Once you have this army, Nemata’s other abilities let you make use of it, sacrificing Saprolings either to pump Nemata himself up for a lethal strike, or to draw more cards which will, more than likely, create even more Saprolings for you. 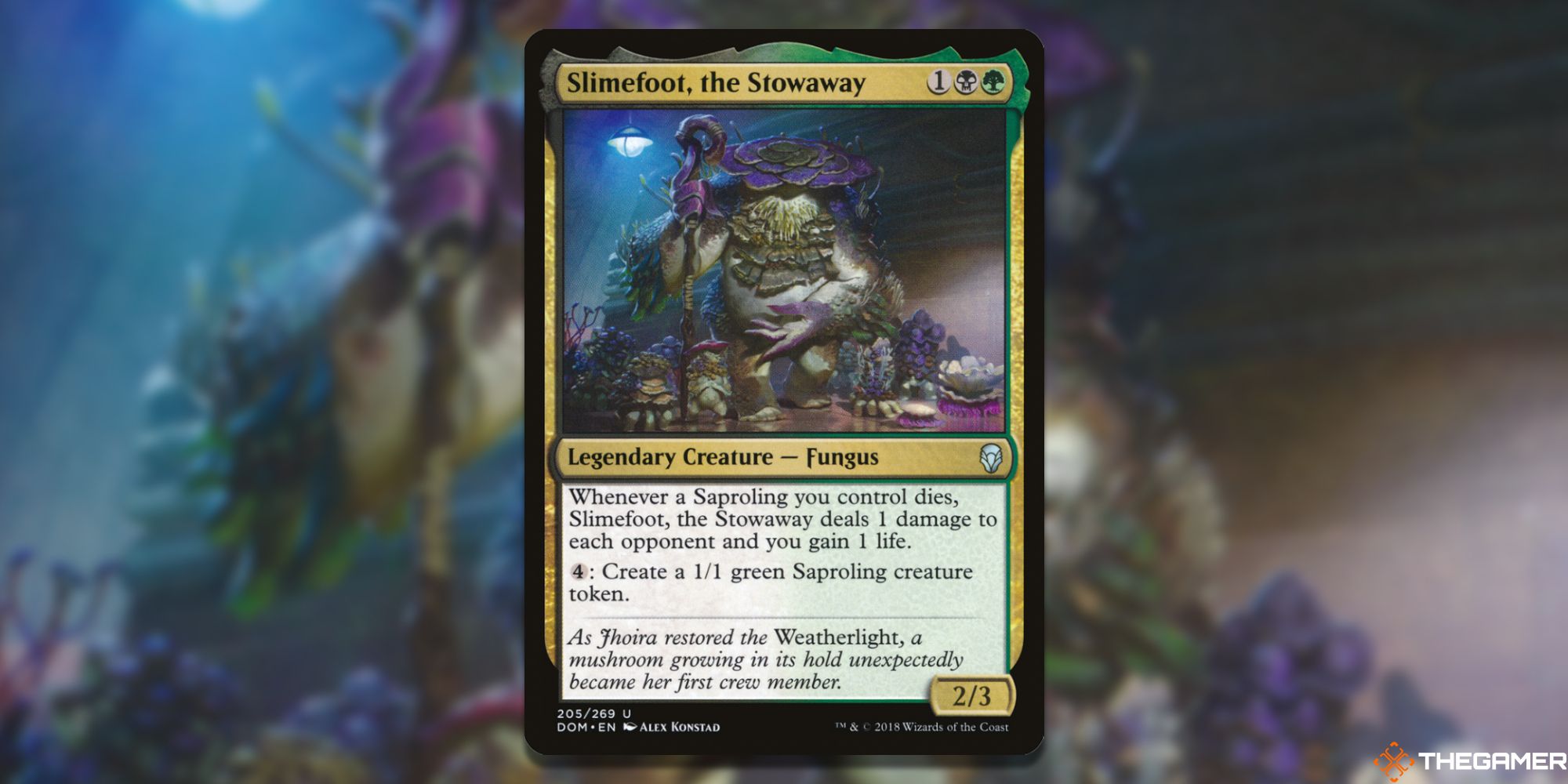 This member of the Weatherlight crew may look unassuming from his artwork, but behind that soft exterior lies the cold, cold heart of a combo-kill enabler. Slimefoot’s low cost means you can cast him from the command zone with ease, and his passive ability, (note the crucial wording of ‘each opponent’) combined with a board full of Saprolings and a good sacrifice outlet, has the potential to wipe out an entire Commander pod in one stroke.

Even if you’re playing a more honest game, Slimefoot is still very solid. He can generate Saproling tokens at will, provided you have the mana to spare, and the incidental life gain he provides can keep you alive even against highly aggressive opponents. 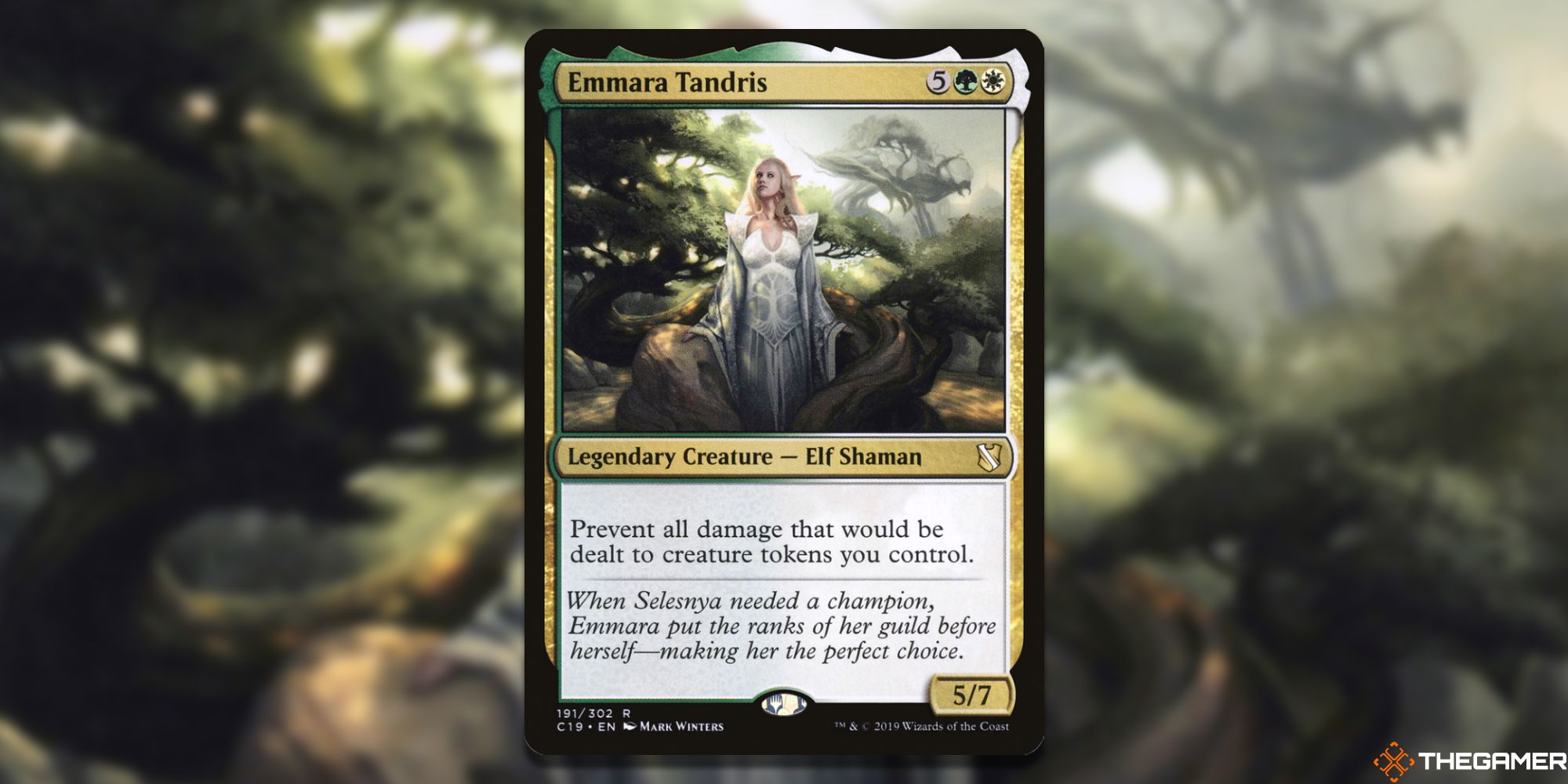 While Emmara Tandris doesn’t directly interact with Saprolings, her ability to prevent all damage to creature tokens you control is a huge help when building and maintaining a board full of them. This effect lets your Saprolings survive damage-based board wipes like Pyroclasm, and lets them block the biggest of ground-based creatures without taking a scratch. It won’t save you from trample damage, though, so watch out for that.

It’s a simple ability on the surface, but it’s one that changes the combat maths of the game drastically and gives you the survivability you need to get into the late game, where you can leverage your mushroom minions to inflict unstoppable lethal damage on your foes. 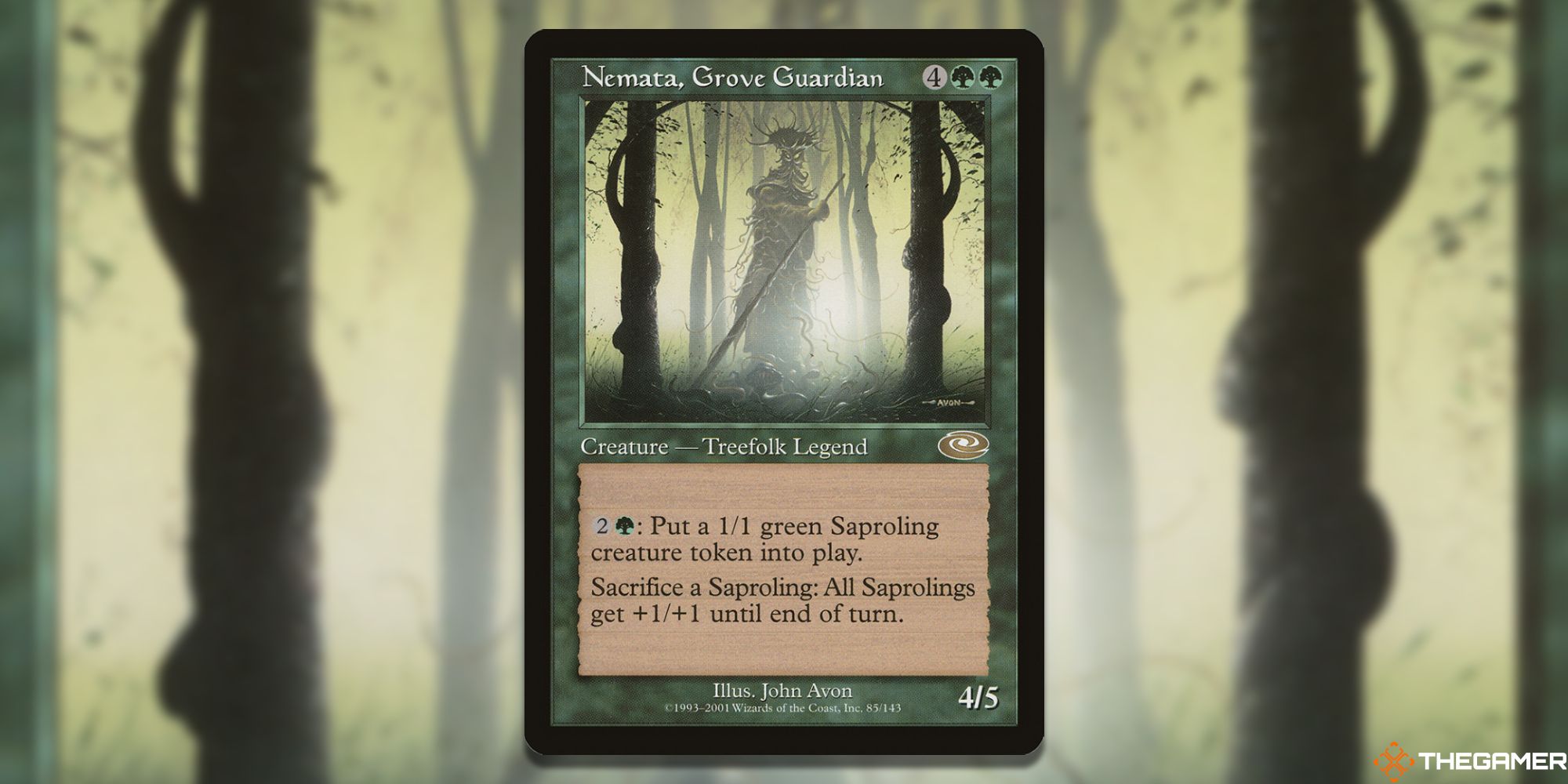 The original incarnation of this towering treefolk might just win the award for most instances of the word ‘Saproling’ on any Magic card. Able to both create Saprolings (for a very reasonable three mana) and sacrifice them for free to pump up your other Saprolings, Nemata is incredibly powerful and flexible.

Free sacrifice outlets are always strong, even type-specific ones, and Nemata lets you pull off dirty tricks like attacking with a board full of Saprolings, then sacrificing the ones that get blocked to pump up the ones that got through for extra damage. It’s a great card, and one that your opponents always need to be wary of. 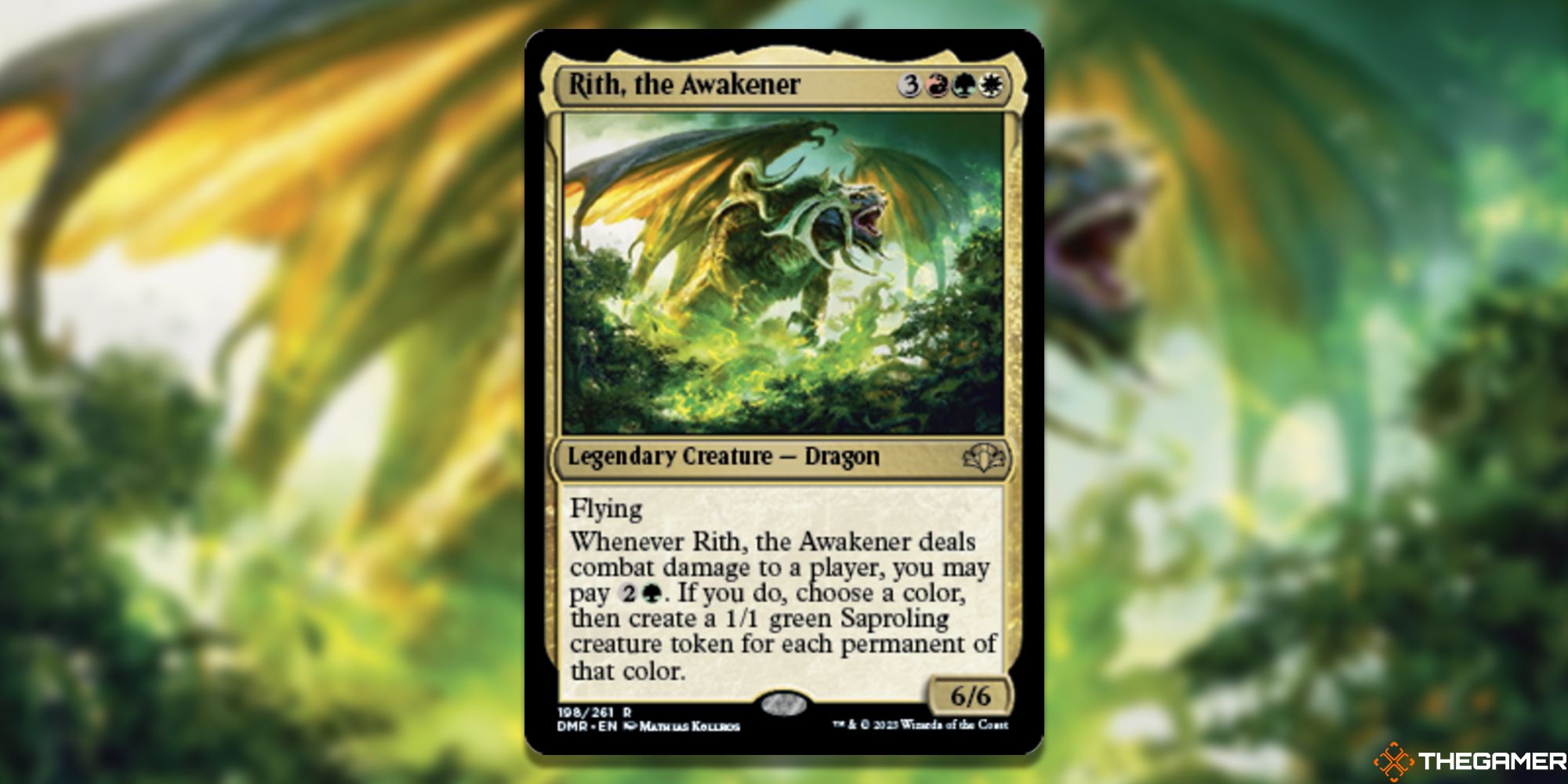 The first thing that comes to mind when you think ‘Saproling’ likely isn’t a huge, fire-breathing dragon, but nevertheless Rith makes for an excellent Saproling tribal commander. Flying makes it much more likely that he’ll get through for combat damage, which is where his main ability kicks in.

Once Rith has dealt combat damage to a player, you can pay three mana to choose a colour, then create a Saproling token for each permanent of that colour in play. This ability means that Rith can potentially be the best single source of Saprolings out there in the later stages of a game, building you an instant army with which to pursue your nefarious fungal ends. 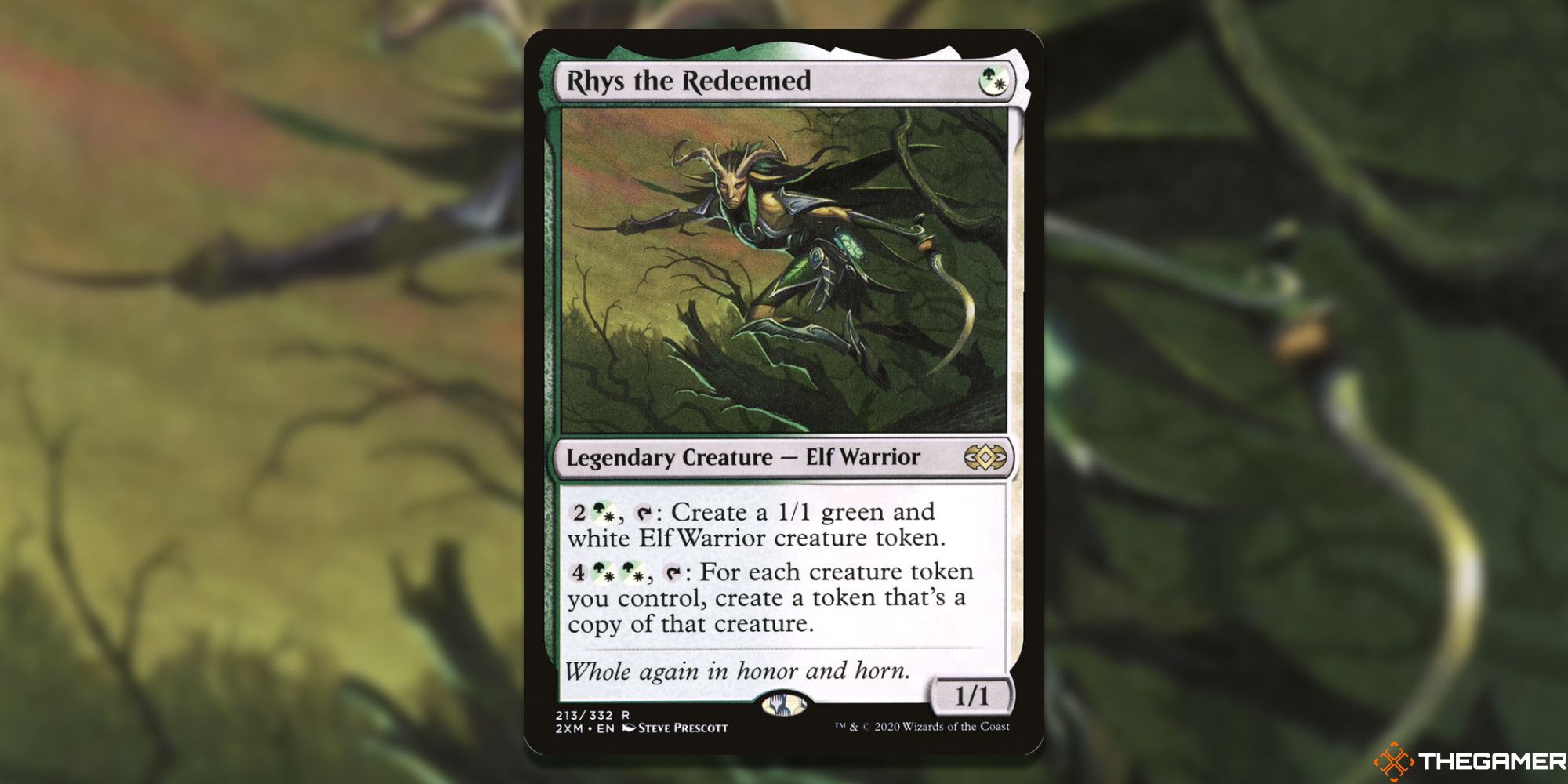 A Commander classic, Rhys the Redeemed is known for his low cost and his explosive ability to double all of your creature tokens in play. This is a very flexible ability, but it works particularly well with a board full of Saprolings, doubling it into a massive horde which, if left unchecked, will continue to double turn on turn, until it consumes the entire pod.

While Rhys is vulnerable at 1/1, and his ability is quite expensive, his low mana cost makes him easy to weave into a turn, forcing your opponents to answer him immediately or else. 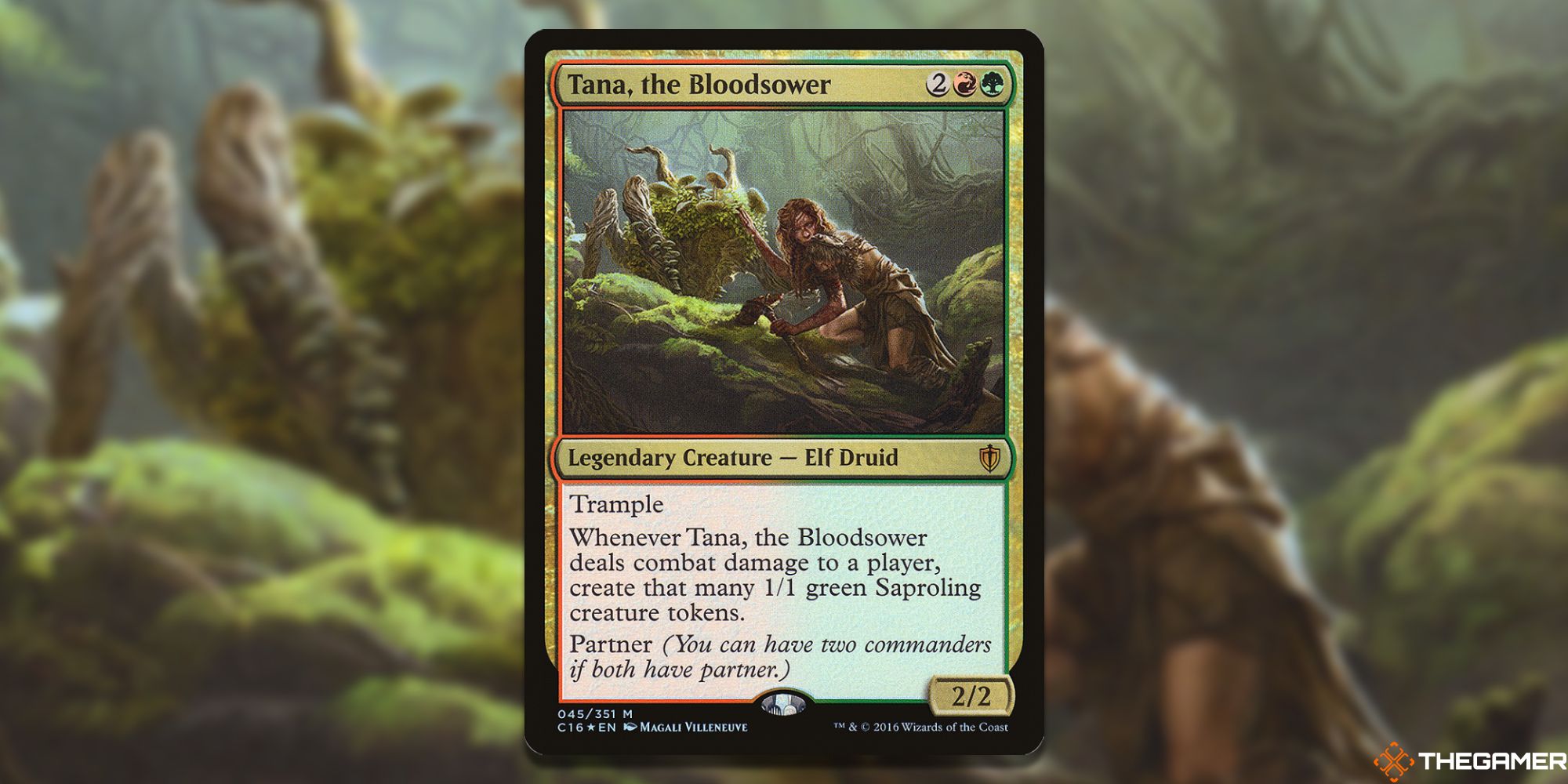 Tana’s ability is very simple; whenever she deals damage to an opponent, you create that many Saproling tokens. Her base power of 2/2 isn’t very imposing, but combined with some auras and equipment, and her innate trample ability, it becomes a force to be reckoned with.

Tana also has Partner, letting you pair her up with another commander. Ardenn, Intrepid Archaeologist is a great pick here, letting you bypass equipment costs and shuffle all of your buff cards onto Tana for a big Saproling-stuffed smackdown. 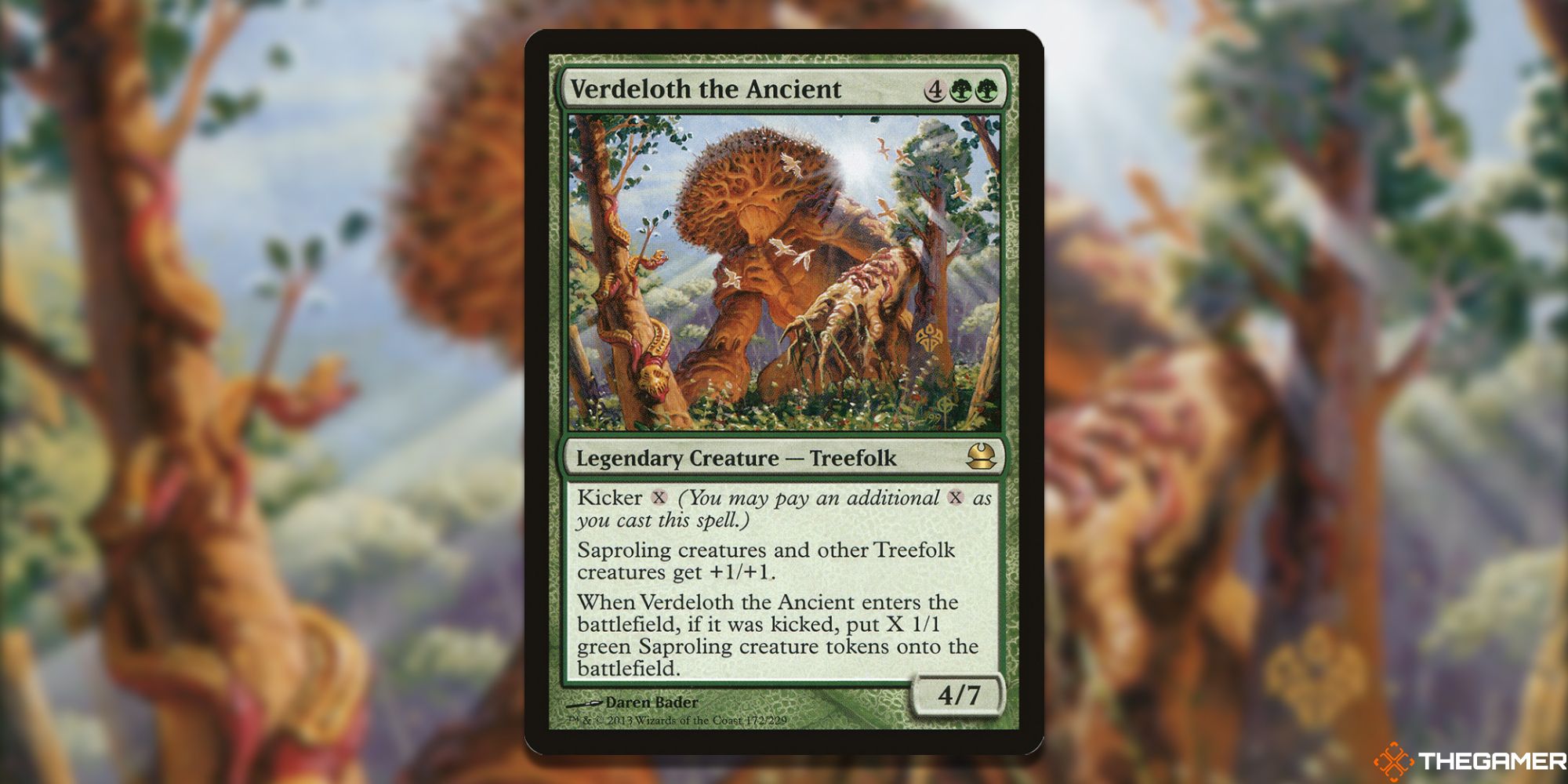 Verdeloth not only acts as a ‘Lord’ for the Saproling tribe, giving them all +1/+1 and essentially doubling their impact on the board, but he can create them as well. As you cast him, you can kick him for any amount of mana to create that many Saproling tokens.

This means that Verdeloth is best suited for a ramp deck; one that generates the most mana possible through searching for lands and other means. Once you’ve built up a huge stack of mana, Verdeloth can turn it into a game-ending threat right out of the command zone. 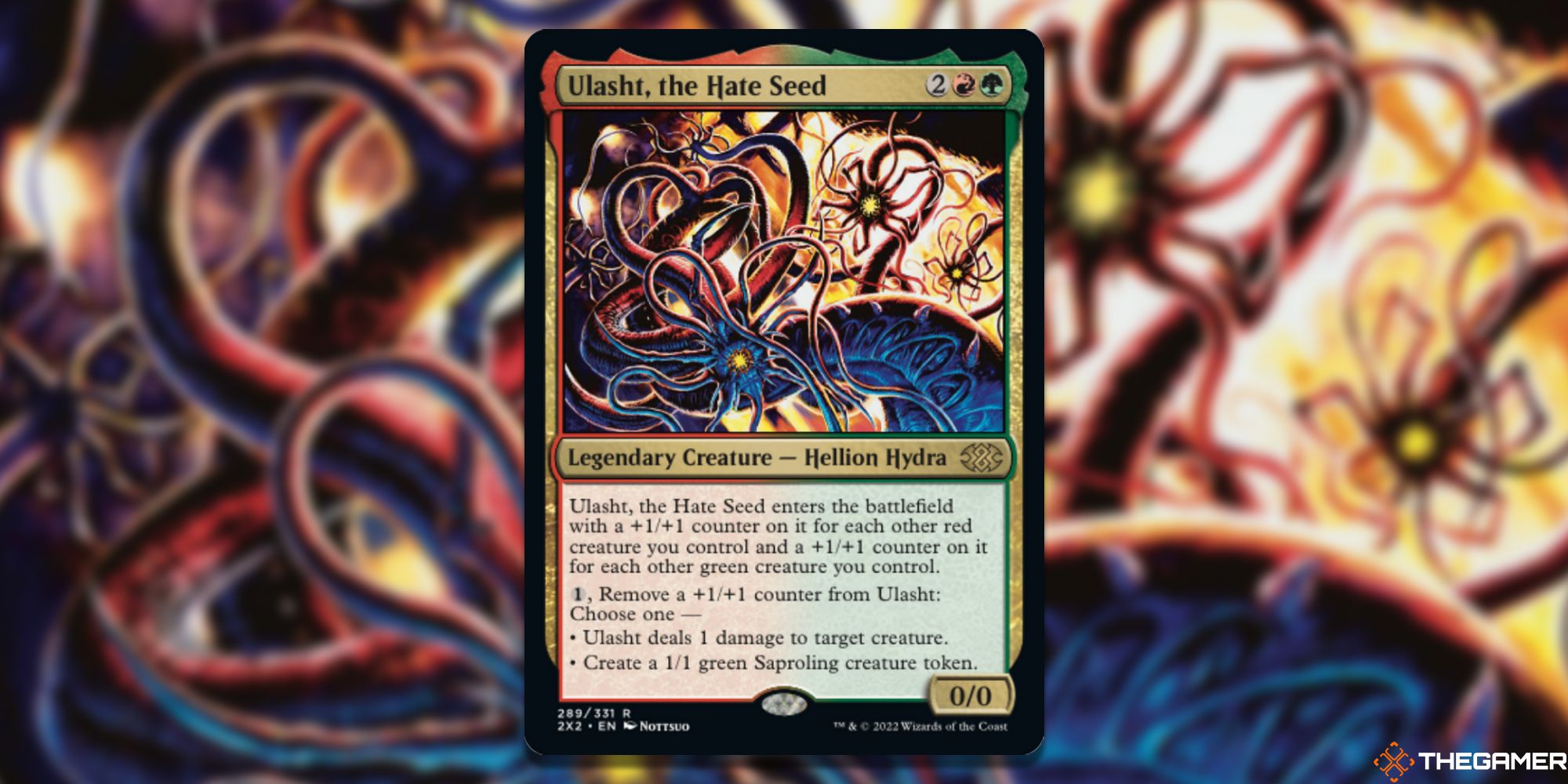 This Legendary Hydra is one of the most powerful Saproling commanders out there. Coming in with +1/+1 counters for each red and green creature you control, it has the potential to be huge in a dedicated token deck, such as Saproling tribal.

In addition, it can trade in its many counters for additional Saprolings, letting you dull the pain of an opponent’s hard removal spell by melting Ulasht down into extra Saprolings. These will, on your next turn, will provide Ulasht with more counters when you cast it again.