Green creatures in Magic: The Gathering are among some of the best that the game has to offer. Embodying the elements of nature, green creatures often feature imposing power and toughness, capable of quickly ending a game if not dealt with immediately. Even if they’re not monstrous cards, they can come loaded with fearsome keywords and abilities, or help cast your larger cards.

Every few months a new set is released, flooding Standard with tons of new creatures for you to experiment with. Being a rotating format, the best creatures rarely stick around for an extended period of time. These green creatures stand out from the rest currently in Standard, but don’t be surprised if they don’t stay on top for long. Given the volatile nature of the format, these creatures can easily be replaced once the next set drops. 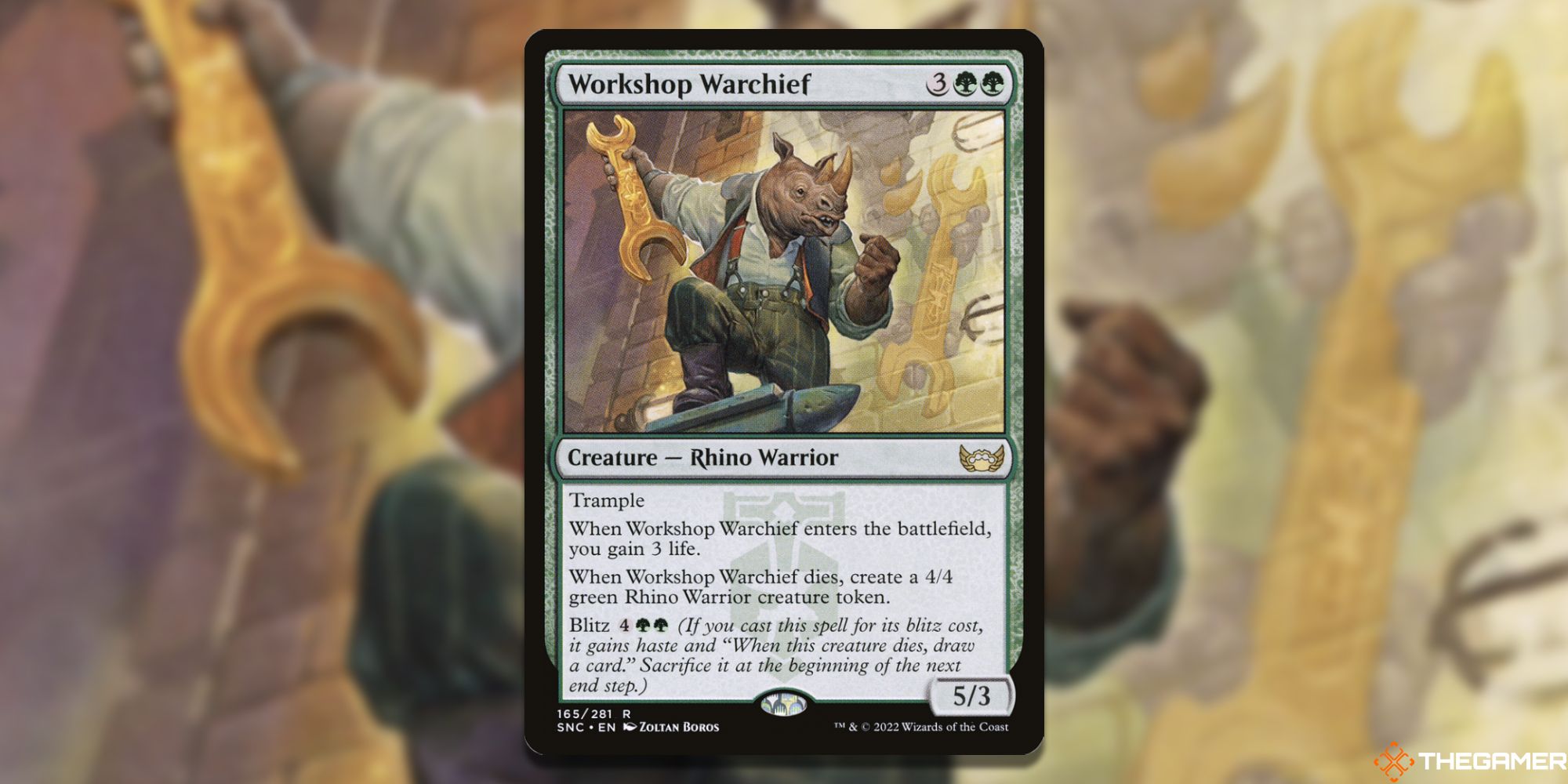 This hard-working Rhino does a little bit of everything, all while being packaged in a versatile creature. For five mana you get a 5/3 creature that gives you a small burst of life when it enters the battlefield.

It also comes loaded with a blitz cost of six mana, temporarily giving it haste and forcing you to sacrifice it at the end of the turn. But since Workshop Warchief replaces itself with a 4/4 token, it becomes a very effective way to apply pressure to your opponents. 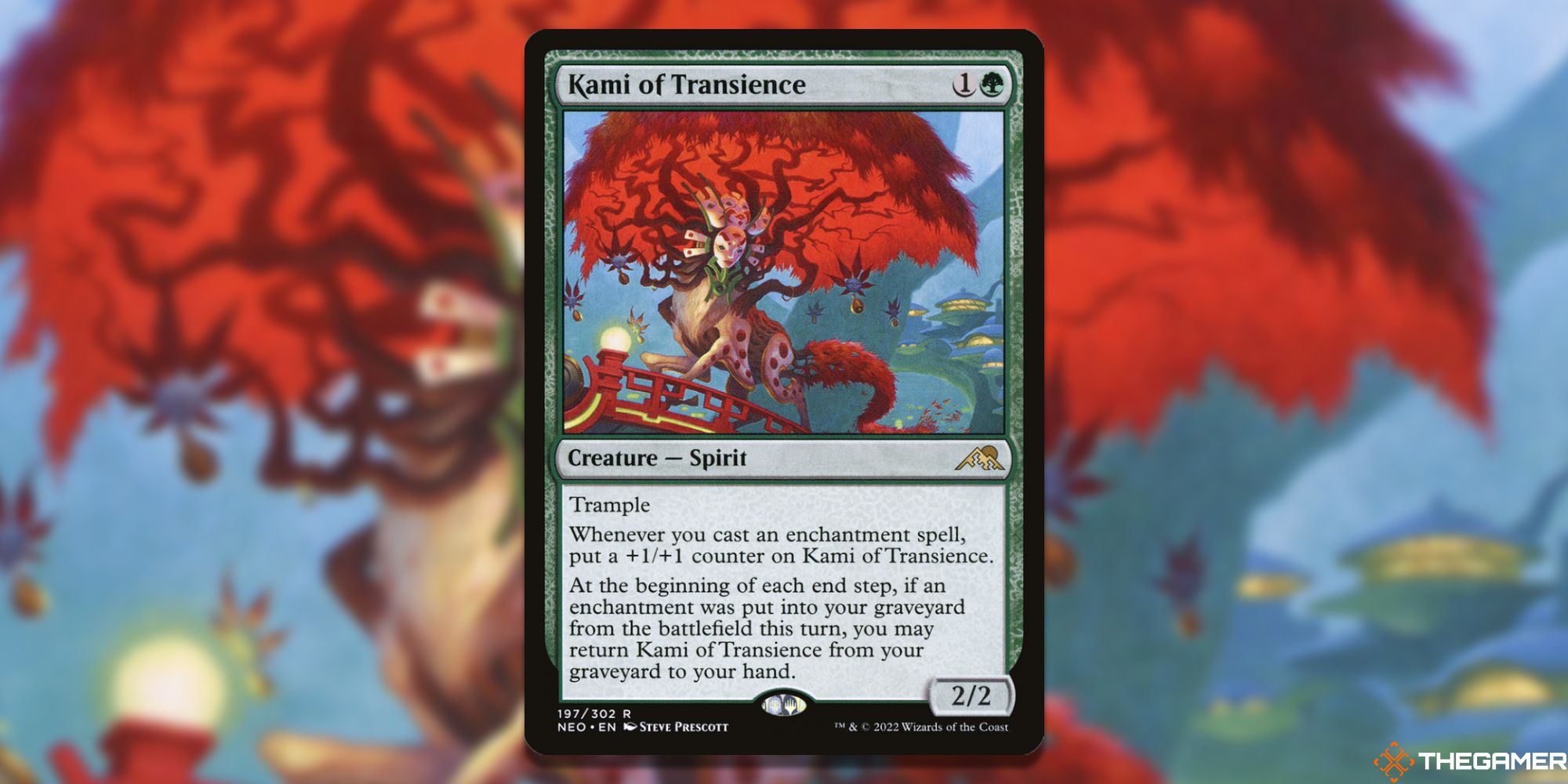 The prominence of green/white enchantment decks might have passed, but it’s hard to ignore the power of Kami of Transience. This Kami comes down early and grows as you cast more enchantments, of which there are plenty thanks to Kamigawa: Neon Dynasty.

With trample, Kami of Transience can push heavy amounts of damage — and even if your opponents can answer it with a removal spell, it returns to your hand whenever an enchantment enters your graveyard. Don’t be surprised to see Kami of Transience gain popularity if a few good and efficient enchantments come out in the next set or two. 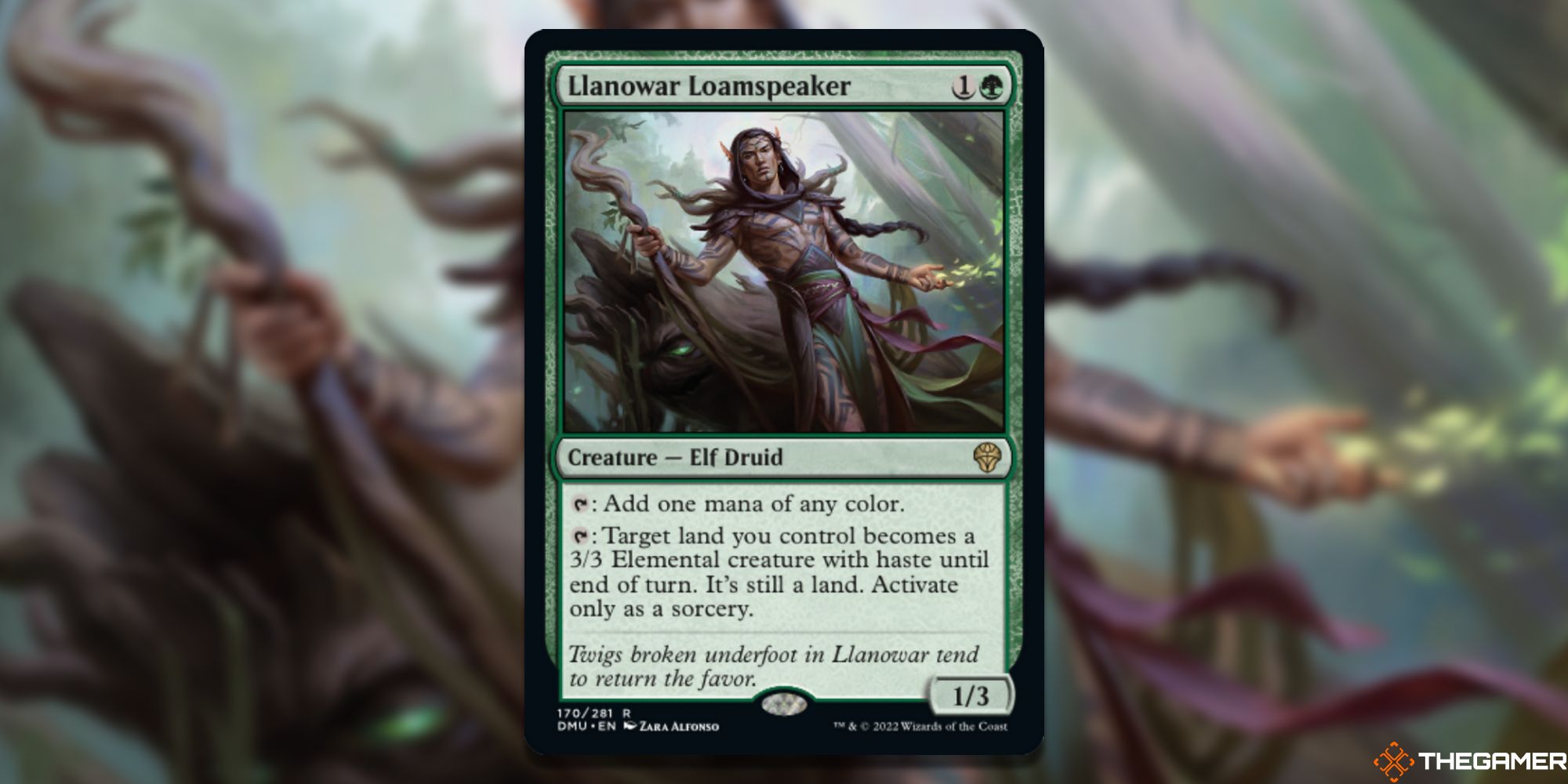 When Standard slows down a bit, you start to see more two-mana ramp creatures like Llanowar Loamspeaker. Thankfully Magic offsets the less-efficient casting cost with a fairly unique ability and a slightly better card on defense.

With a 1/3 body, Llanowar Loamspeaker can safely block most other early-game threats when it’s not ramping you up in mana. When you don’t need the mana anymore or perhaps draw the Loamspeaker later in the game, you can start animating your lands and swing in for an extra three damage with the Loamspeaker’s second ability. 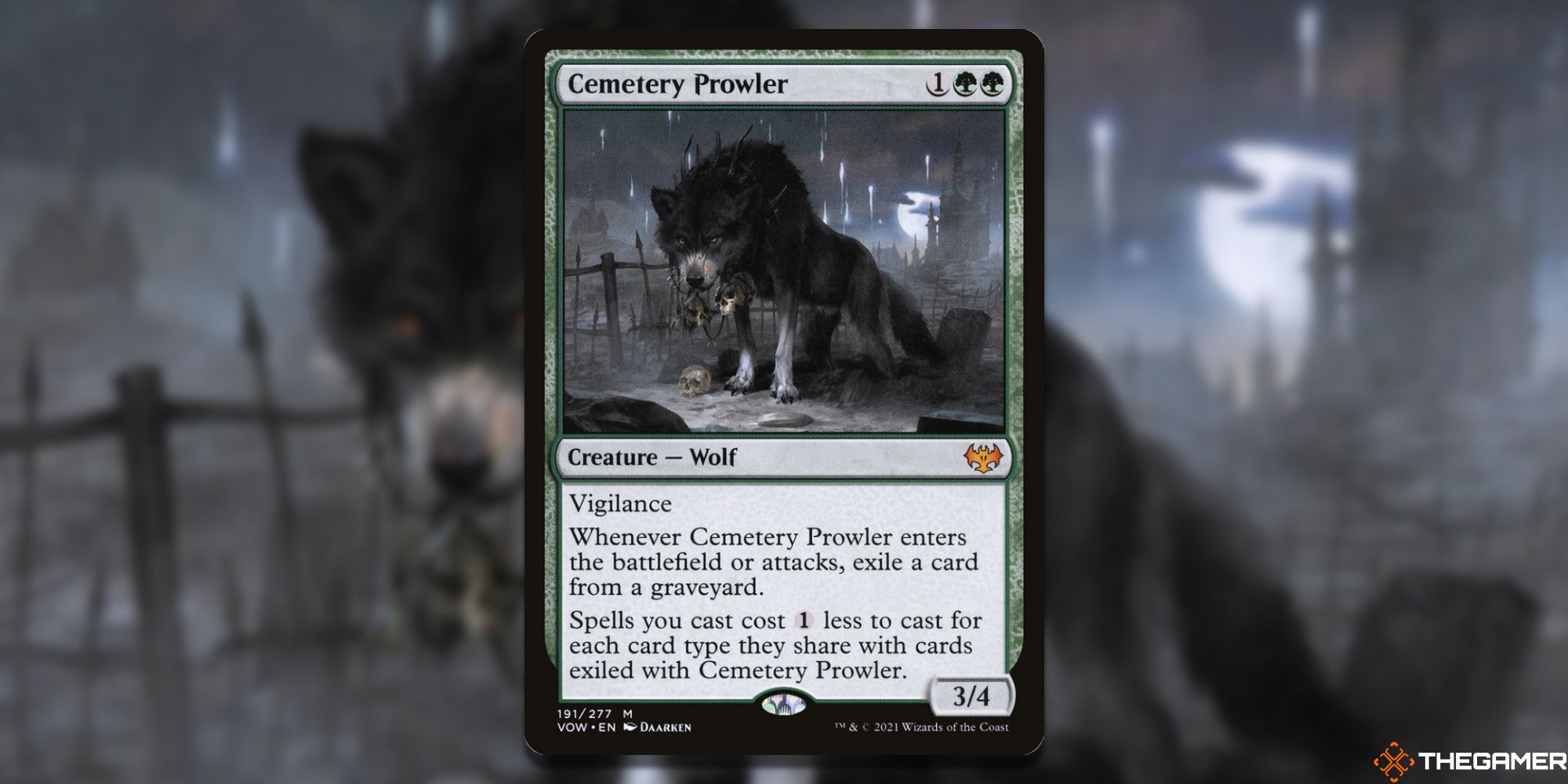 A 3/4 for three mana is already a solid creature but Cemetery Prowler doesn’t stop there. This Wolf starts exiling cards from your opponent’s graveyard when it enters the battlefield or whenever it attacks. This ability is vital for stopping any sort of graveyard-based strategies, removing their targets from the game entirely.

As if that wasn’t enough, Cemetery Prowler also reduces the cost of cards of the same type as it has removed for you, allowing you to cast your own spells for one generic mana less. 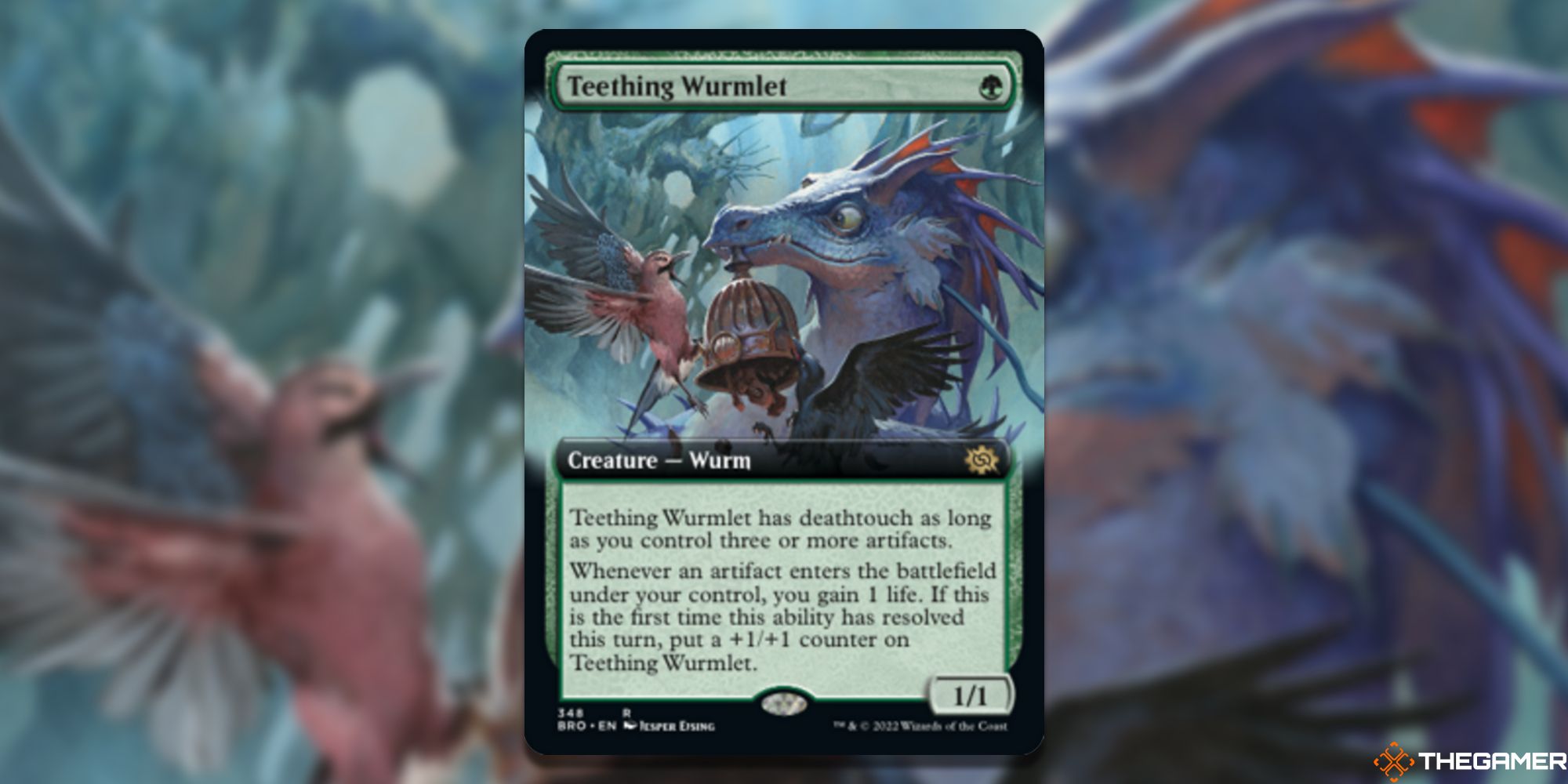 Teething Wurmlet has tons of potential in Standard, even as it remains one of the best green cards in the format. This little baby Wurm has deathtouch the second you control three artifacts, letting it trade up with just about any creature your opponent throws out.

Once you start playing more artifacts it grows, gaining you life every time an artifact enters the battlefield and giving it a +1/+1 counter if it’s happening for the first time. This ability will trigger with any type of artifact, including tokens and artifact creatures. 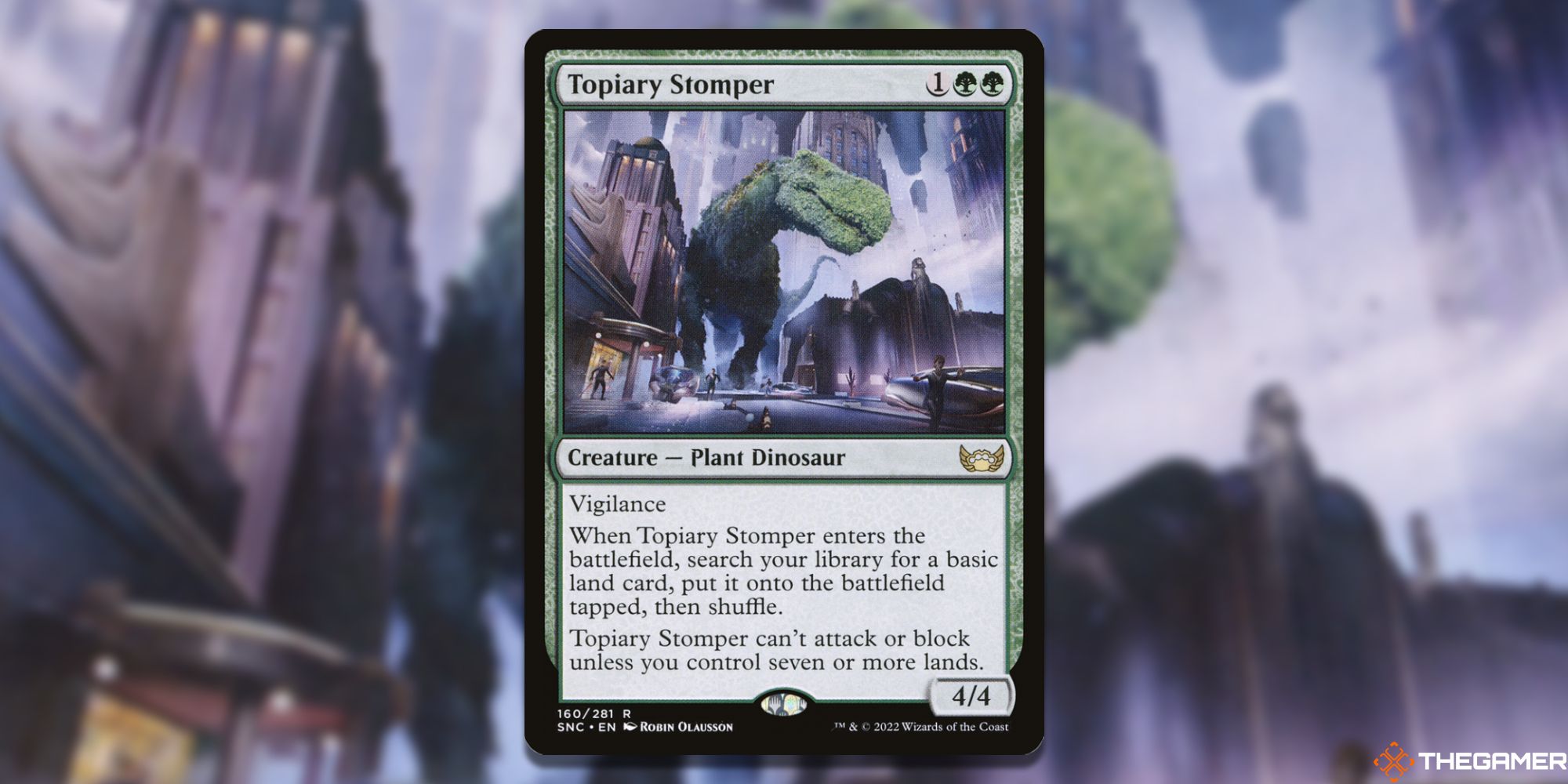 Despite falling off a bit from regular play, Topiary Stomper is still a very efficient and powerful card. For just three mana for a 4/4, Topiary Stomper helps accelerate you up in lands, letting you search for a basic land and put it into play.

While it can’t attack or block until you get up to at least seven lands, for most ramp decks that’s not a problem at all. Another nice feature of Topiary Stomper is that it can crew most relevant Vehicles in Standard currently, despite not being able to attack or block. 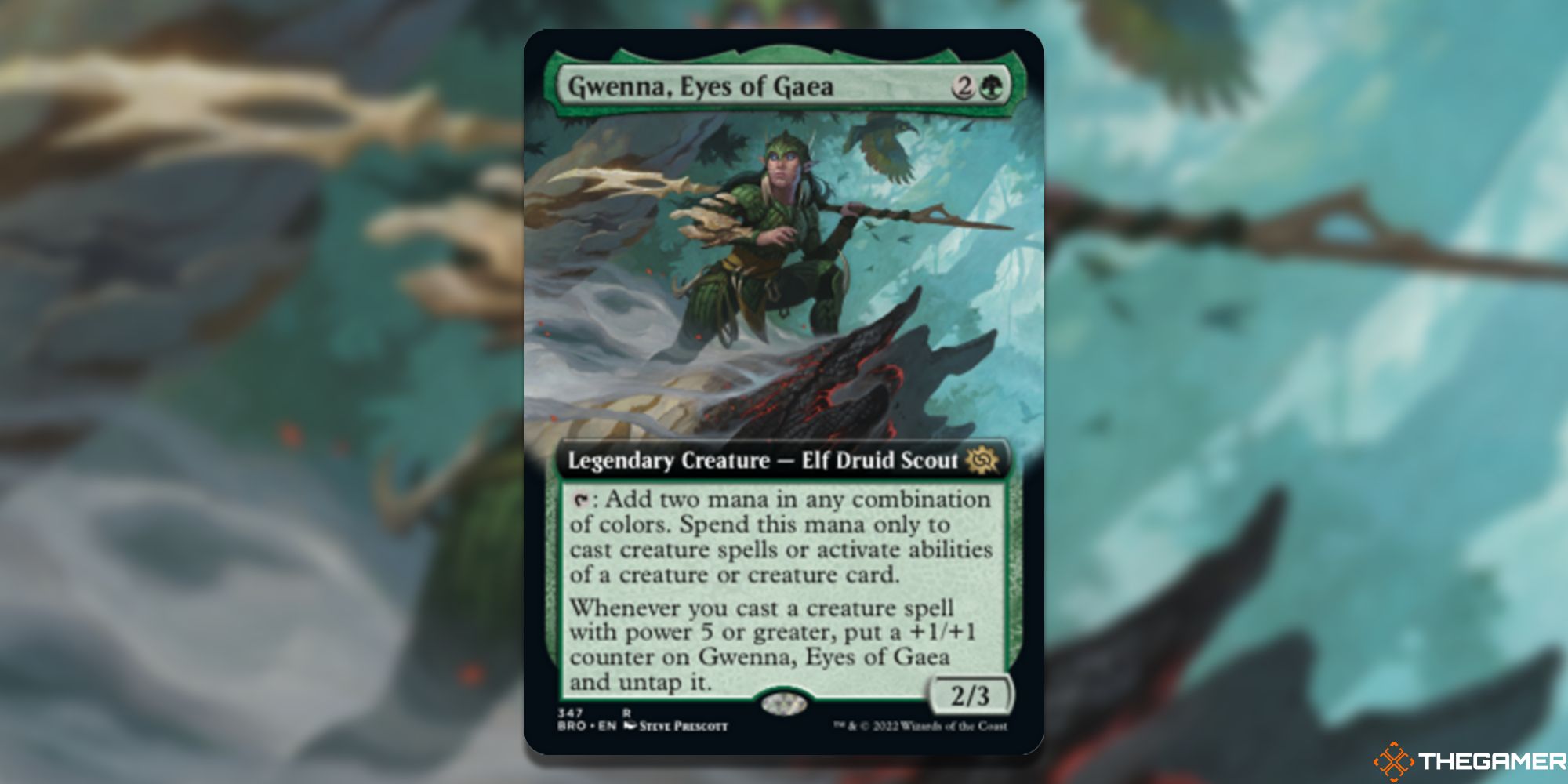 If you’ve got some seriously powerful creatures you’re trying to ramp into then Gwenna, Eyes of Gaea might be more your speed. With Gwenna you get to add two mana to your mana pool, but it is limited in its use since you can only spend it on creatures or their abilities. Creatures that add mana can feel a little sidelined once you get your larger creatures in play, but not so with Gwenna.

As you cast creatures with power five or greater, Gwenna gets +1/+1 counters and you get to untap it, potentially casting more spells or leaving a now larger Gwenna untapped for blocks. 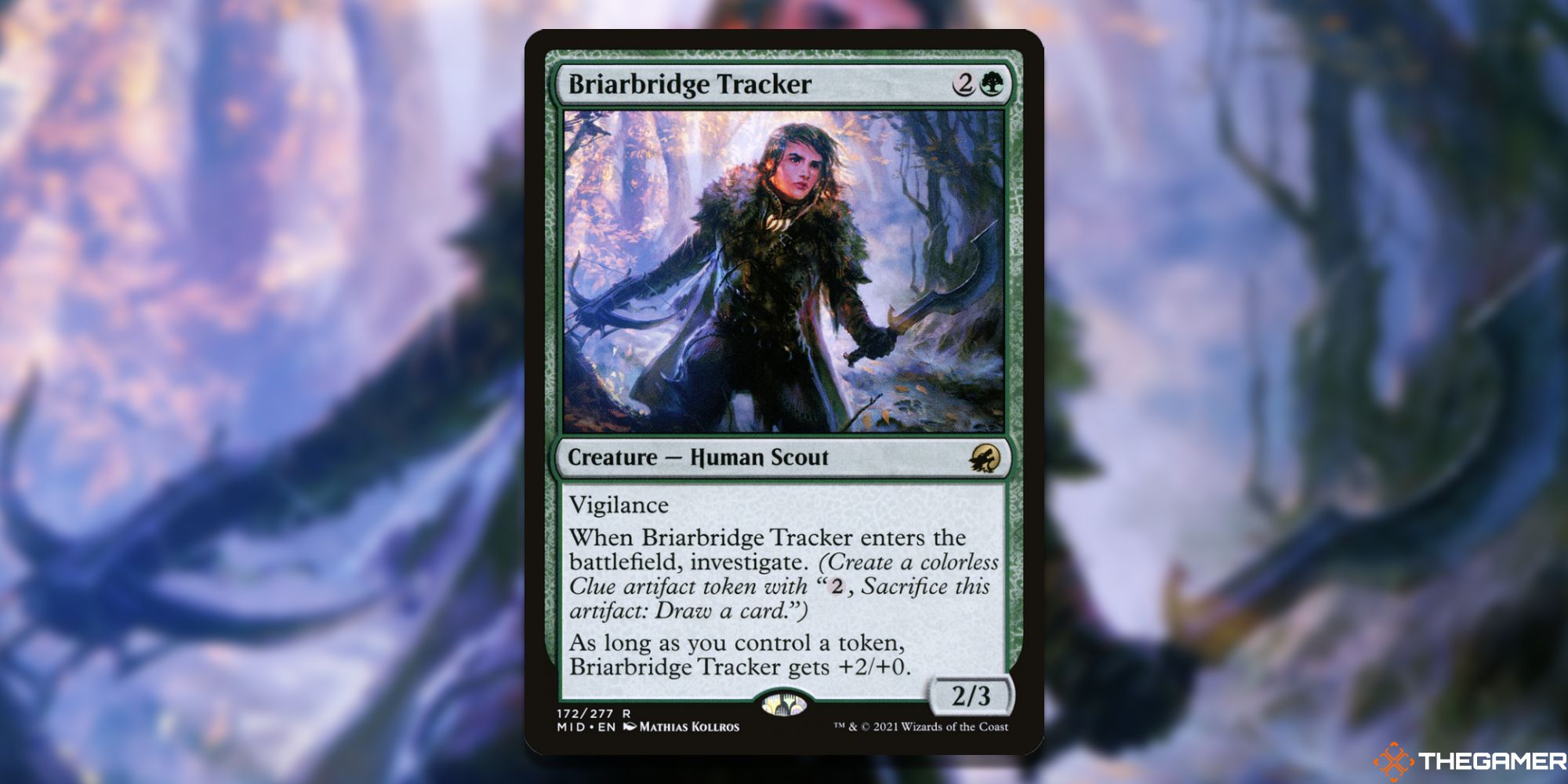 With plenty of ways to make tokens in Standard, Birarbridge Tracker is often seen paired with Fable of the Mirror-Breaker and Bloodtithe Harvester, both powerful ways to keep making tokens. 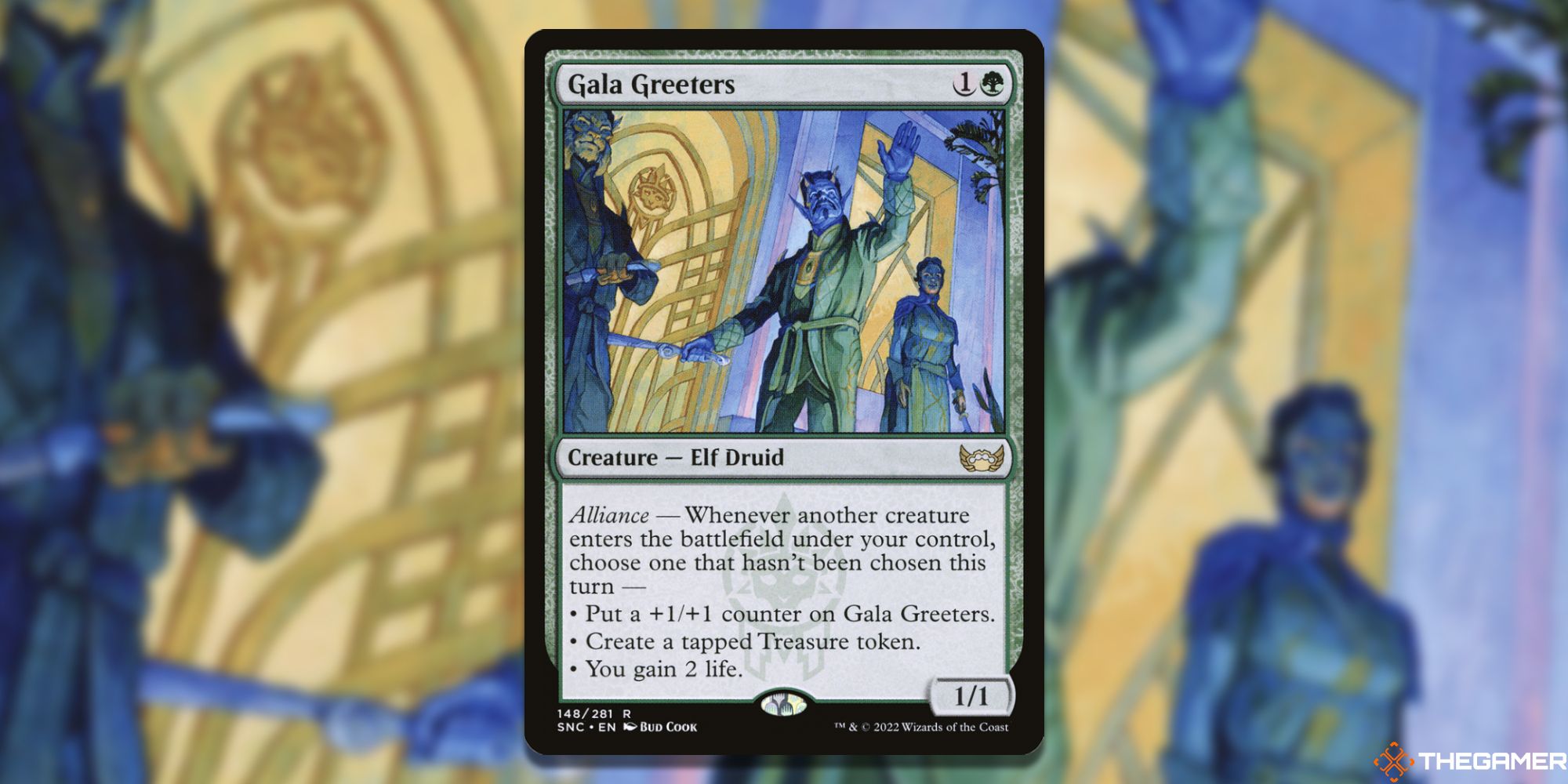 If you’re looking to generate tons of value in a turn and repeat it over the course of the game, Gala Greeters is the way to go. Every time a creature comes into play you get to pick from one of three options that haven’t already been picked that turn.

Early on it can be good to pick up a few Treasure tokens to help ramp up to other spells. Once you’ve established yourself a bit, you can start pumping it with +1/+1 counters, or if you’re behind a bit gain some life. 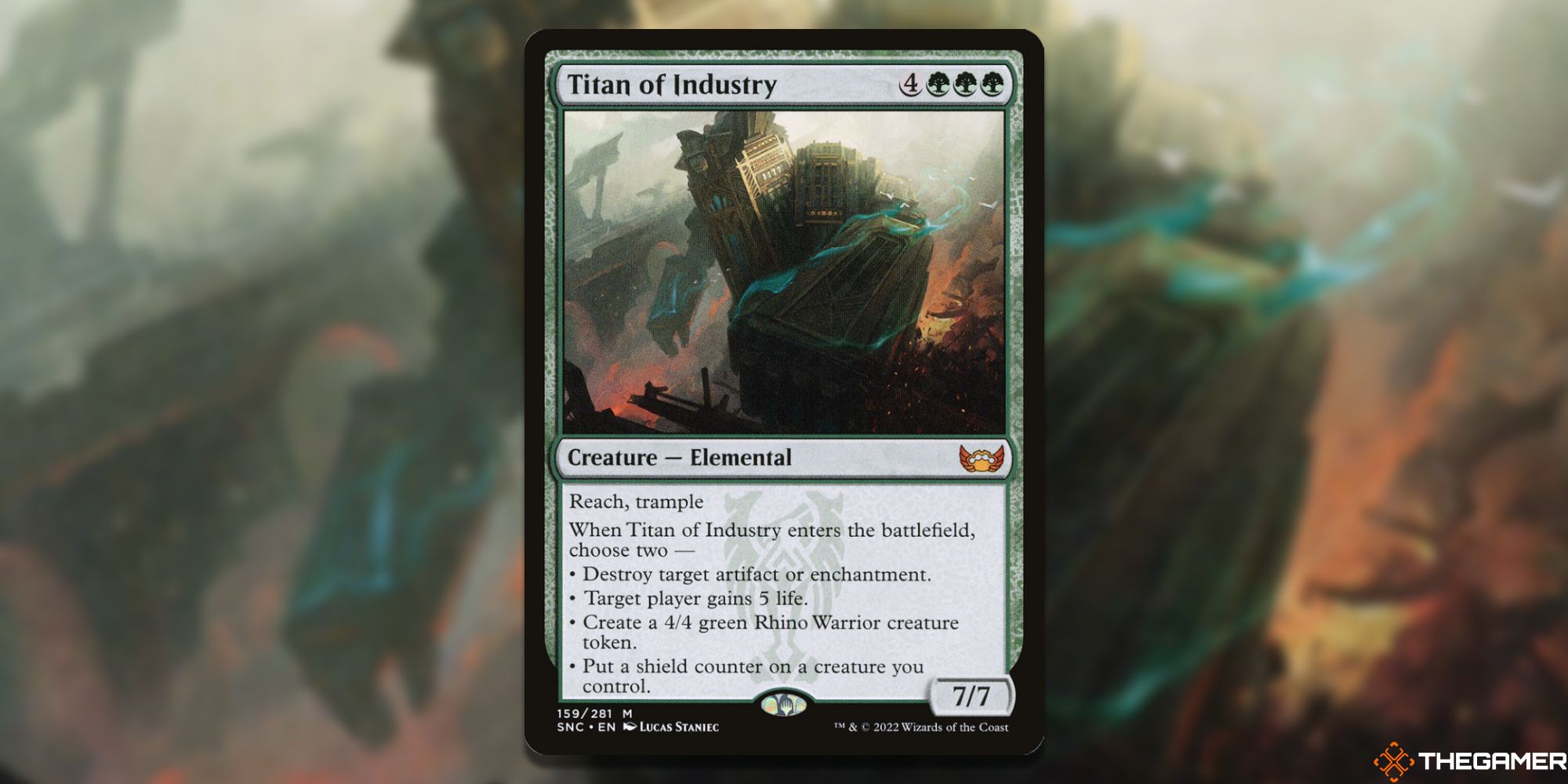 This massive Elemental from Streets of New Capenna has all sorts of options to pick from when it enters the battlefield. The most relevant picks from Titan of Industry’s four modes are often destroying an artifact or enchantment or creating a 4/4 Rhino creature, though the other two modes can be good in different scenarios.

All this is on top of a 7/7 creature with reach and trample, all but guaranteeing that if your opponent doesn’t have an answer or two for it immediately they’re going to be taking some damage.