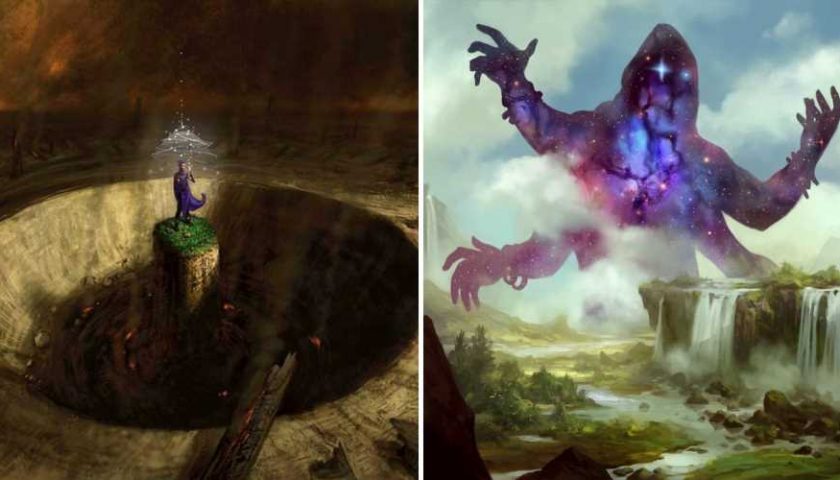 Magic: The Gathering's Modern format often moves at a pace that Standard-only players find difficult to keep up with. One unfortunate result of the format's breakneck speed is the inability for most enchantment spells to have enough of an effect before a game ends. After all, enchantment spells primarily serve as a method to modify the battlefield over many turns, to your deck's favor. When the amount of total turns in the game shortens, the benefits of these long term spells become much less tantalizing. 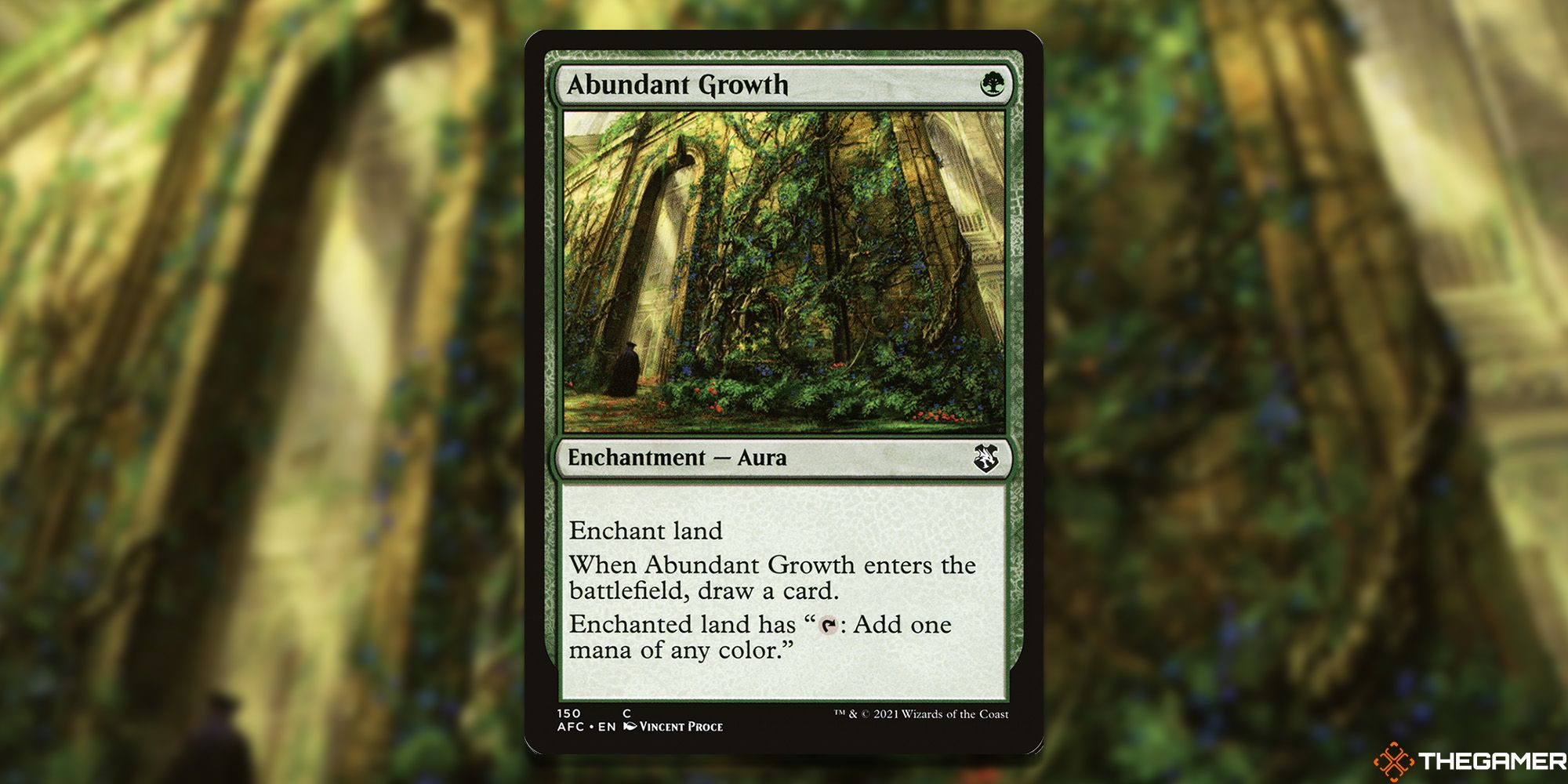 Utopia Sprawl deserves an honorable mention as well, as it provides a similar effect and is usually also played in these decks. However, the fact that it doesn't cantrip makes this card a two of inclusion at most. 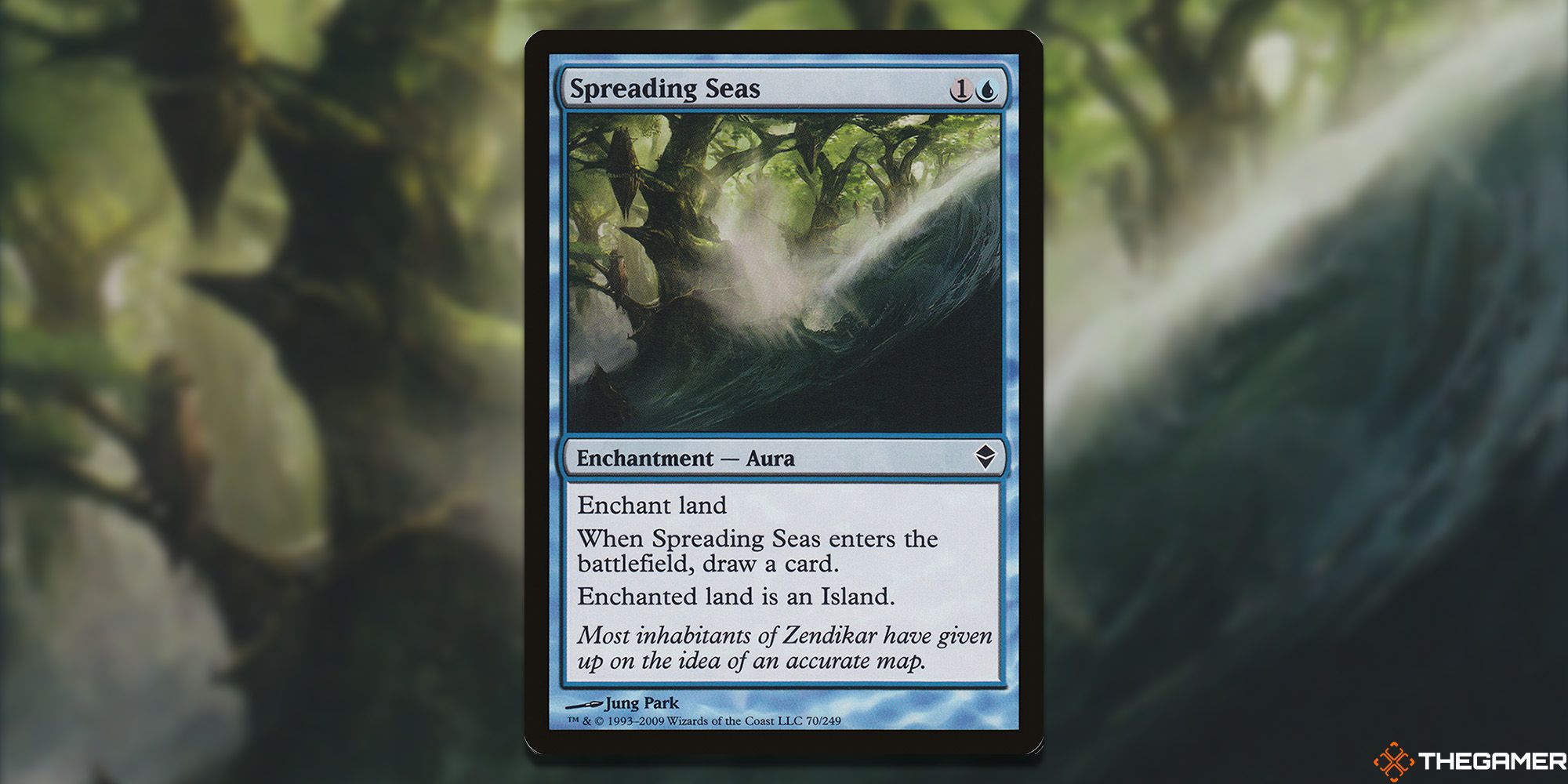 Continuing on with the theme of mana-related enchantments, Spreading Seas once took up a decent chunk of the Modern meta when Merfolk decks were more powerful. Again, we see the importance of cantrips here. Where Abundant Growth fixes your own deck's mana though, Spreading Seas is used to disable your opponent's access to the colors they need. Turning a dual land that taps for red and white into an Island is an easy way to slow opponents down, as they scramble for more red and white sources.

Unfortunately, as better and better lands have been printed, Spreading Seas has become a much less reliable method of interrupting opponents' access to the colors they need. This, coupled with the downfall of Merfolk, has led to this card presently becoming a sideboard inclusion in a handful of decks. 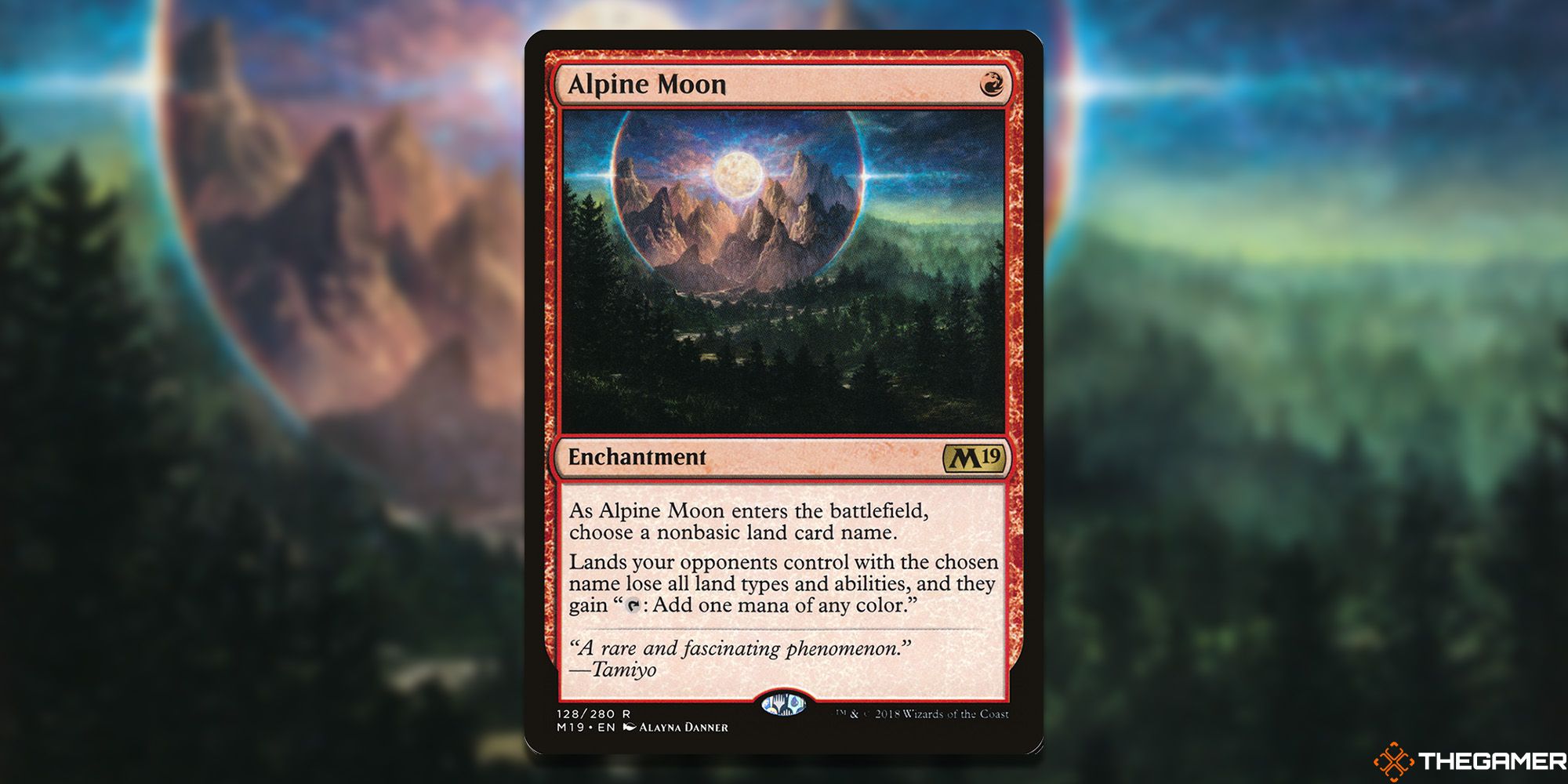 Serving as yet another reliable sideboard card is the enchantment Alpine Moon. For the extremely small cost of one red, Alpine Moon can shut down opposing man lands, disable win conditions like Valakut, and slow down big mana decks such as Mono-Green Tron.

Since its printing, this enchantment has proved its worth as an important sideboard card in Jund decks, and may yet have a future in additional decks that develop down the line. 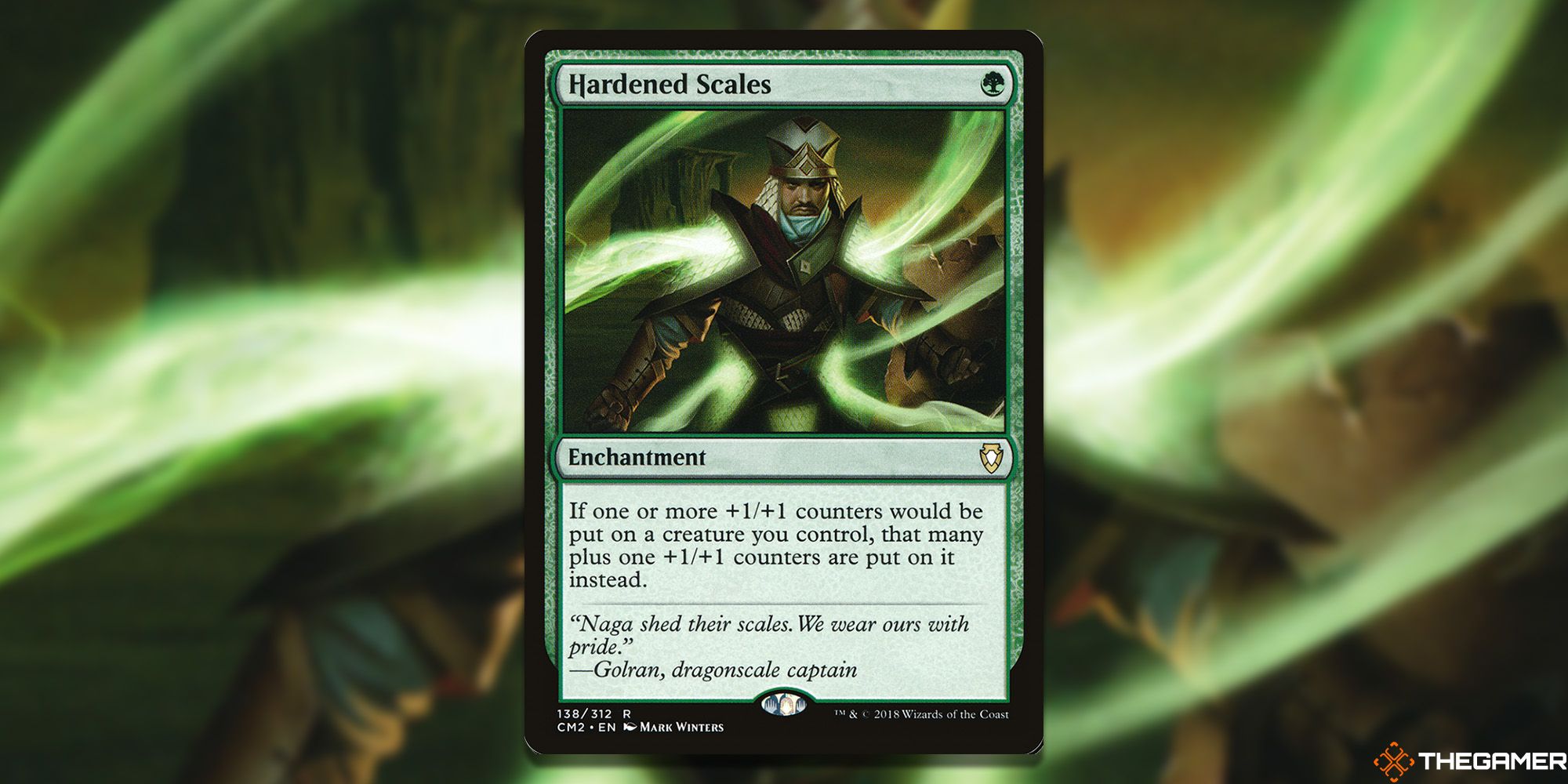 Here's one of two enchantments on the list that function as enchanments traditionally do. Thanks to its lowly cost of one green, Hardened Scales is able to come down early enough in the game to make a big difference. Couple this enchantment's effect of doubling counters with cards like Walking Ballista, Hangarback Walker, and Arcbound Ravager, and you've got a recipe for success.

There was a time not too long ago that Hardened Scales decks completely overran the Modern meta, dominating much of the field for months. While the deck isn't quite so successful nowadays, its still a contender that Modern players need to be prepared to face. 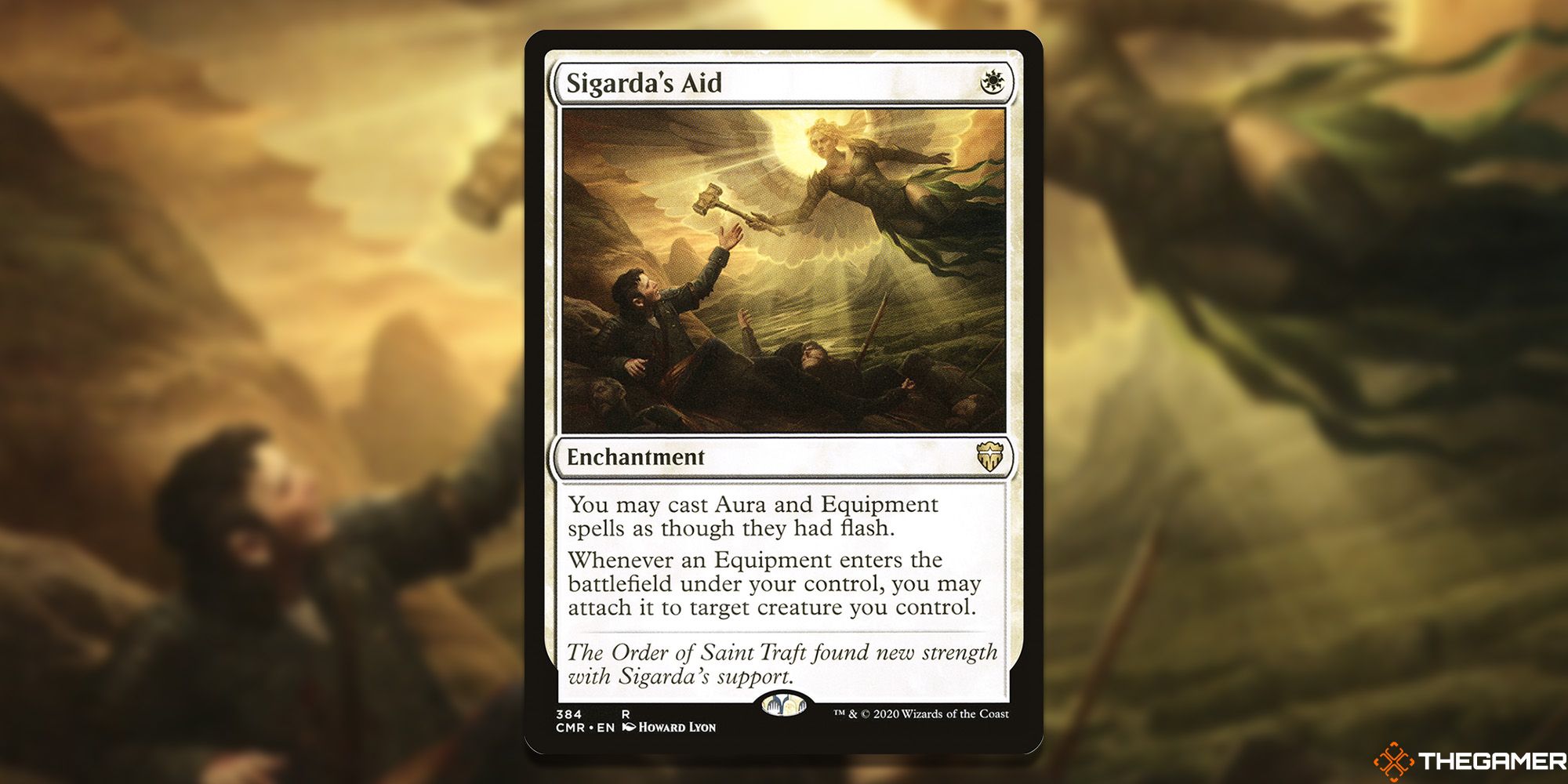 This is a card that, since its release, was long speculated to be useful in a future deck. Believers in Sigarda's Aid were finally rewarded when the Hammer Time deck emerged from the Modern meta, finally making use of the well-remembered card Stoneforge Mystic — which was unbanned in Modern back in August 2019.

Like Hardened Scales, the usefulness of Sigarda's Aids is largely derived from its lowly cost of one white, alongside the existence of powerful cards to combo it with. These include Stoneforge Mystic, Colossus Hammer, Puresteel Paladin, and other equipment. 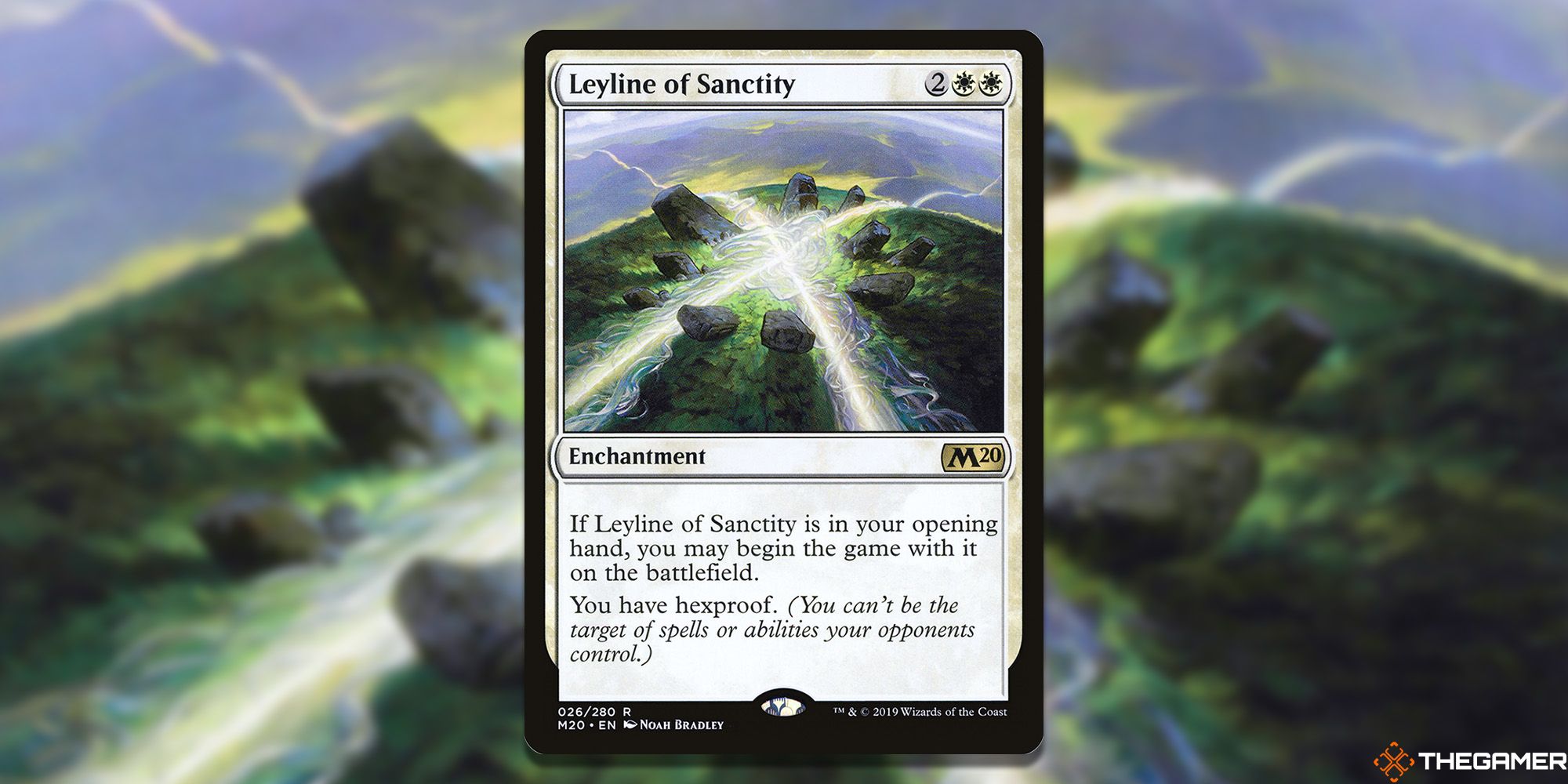 The prevalence of Leyline of Sanctity in many deck's sideboards isn't due to the card being especially good or anything. Funnily enough, it's in fact a response to the equal prevalence of Burn decks in the meta. Burn has always been a contender in every stage of Modern's meta history, and decks that are unprepared to face its astounding speed — there are some draws from this deck that can kill as early as turn 3 — simply cannot make it in the format.

Leyline of Sanctity is one of the easiest ways to shut Burn decks down, as it blanks a huge percentage of cards in their deck by disallowing them from directly targeting your life points. Drawing this card in your opening hand is usually a surefire way to win a game against Burn, making Leyline of Sanctity a necessary sideboard inclusion in decks that run white.

4 Leyline Of The Void 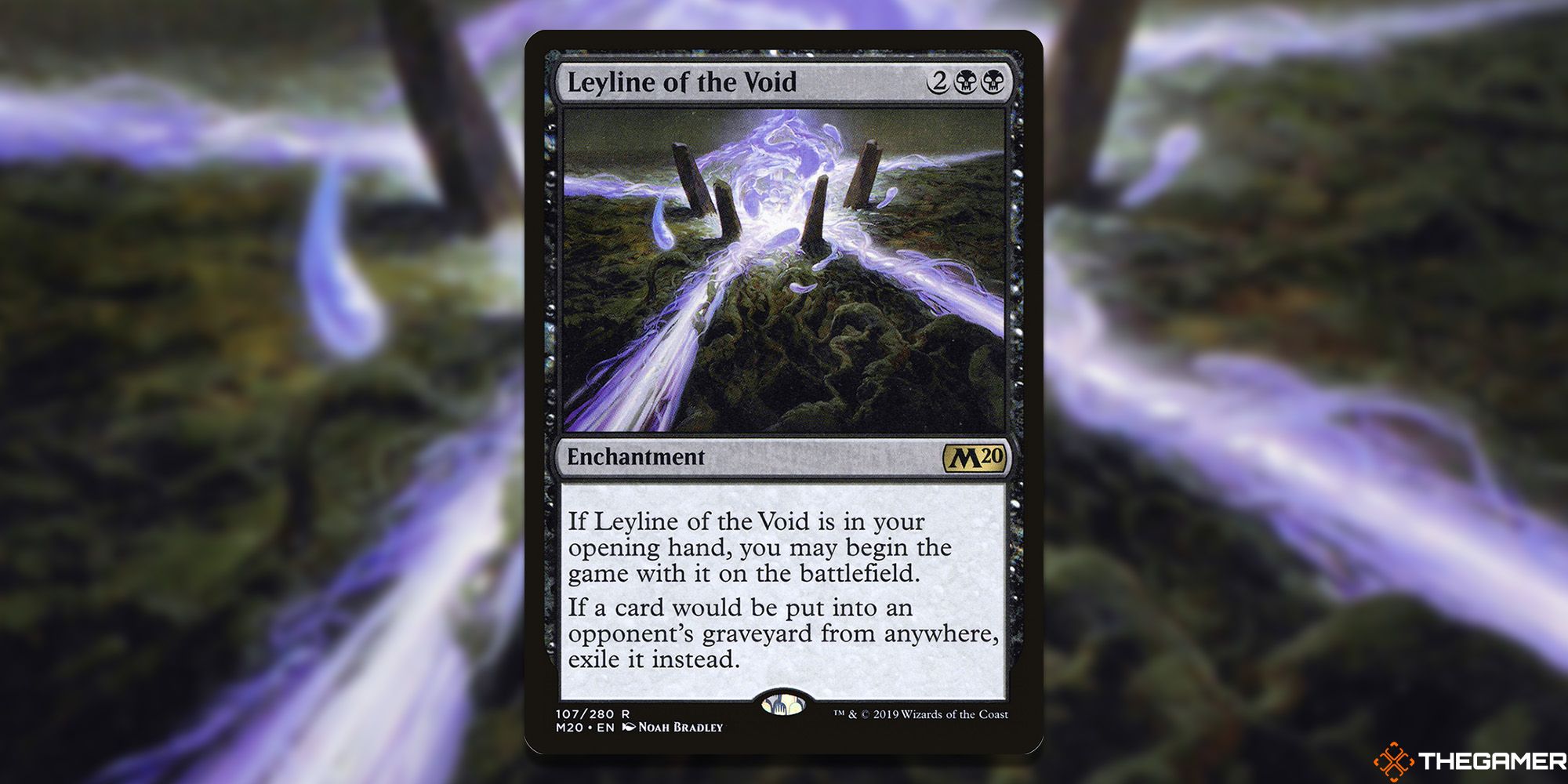 Like the previous card, Leyline of the Void is yet another near-necessary sideboard inclusion in decks that run black. At the moment, it's arguably a more impactful card too. The Murktide Regent deck, which is currently dominating the Modern meta with a ridiculous 14% meta share, requires a graveyard in order to cast its namesake card.

Consequently, removing an opponent's graveyard before the game even begins makes a huge difference when facing Murktide Regent pilots, as well as a number of other off-meta graveyard-centric builds. 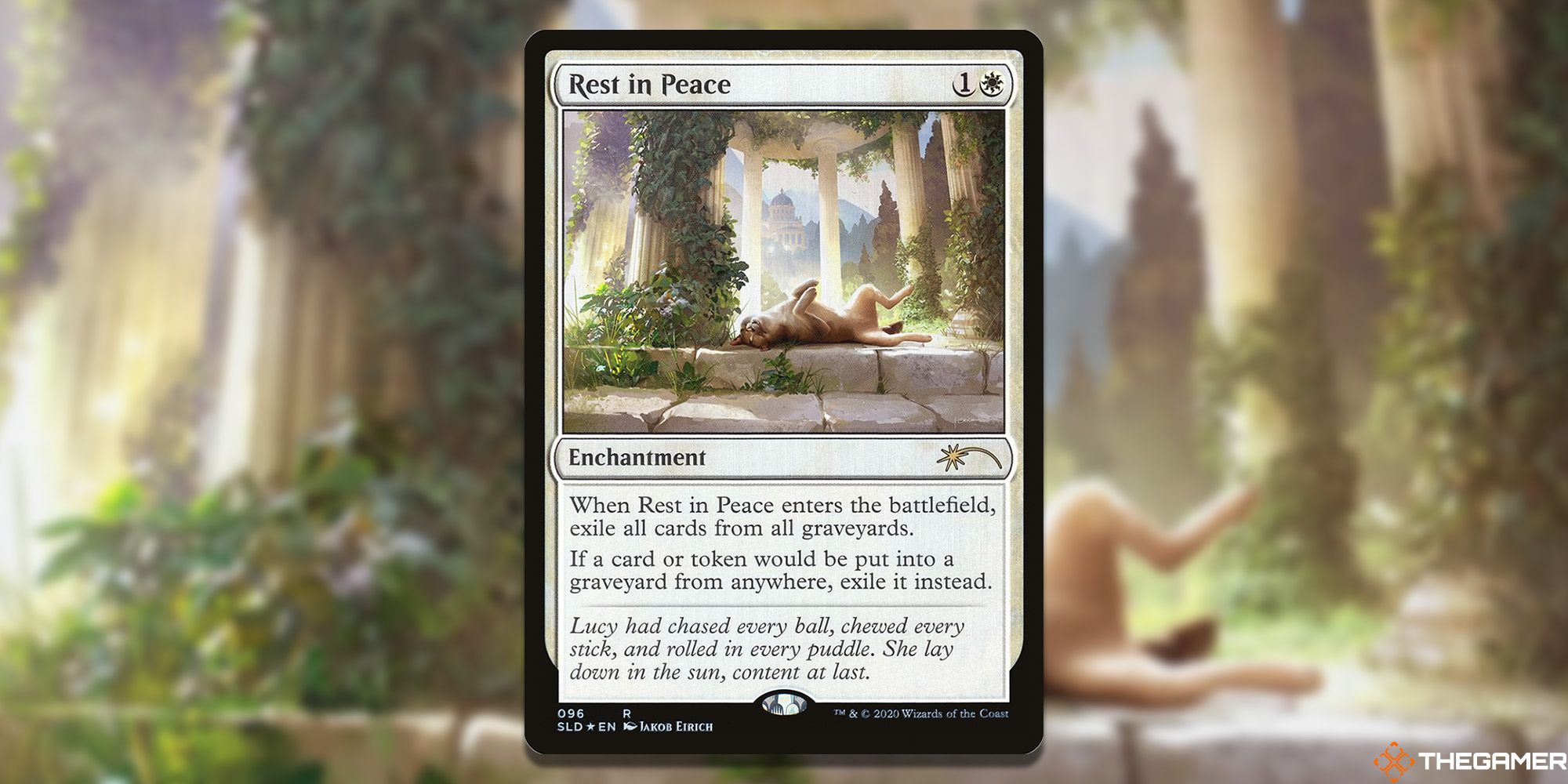 At a CMC (converted mana cost) of two, this card is also much more reliable than hoping to draw Leyline of the Void in your opening hand. That being said, each spice of graveyard hate has the dishes it goes best with. 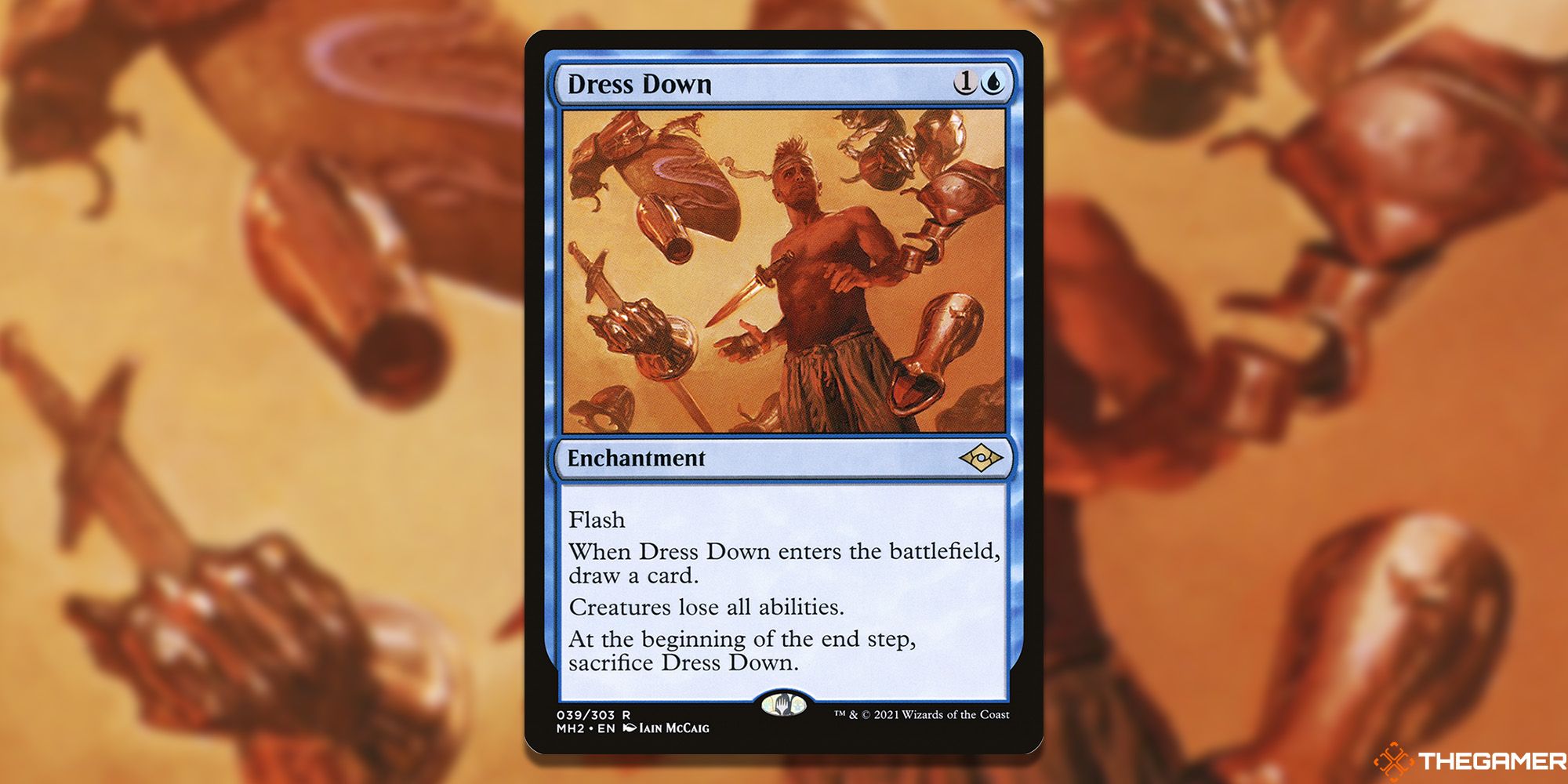 Now here's an interesting card that players who haven't kept up with Modern may not have heard about yet. When Modern Horizons 2 was first released, most players decided that this strangely-worded enchantment was just another bulk rare. However, time has proven that this sentiment couldn't be any farther from the truth. Dress Down is a two CMC enchantment that cantrips, has flash, removes all creature abilities, and then sacrifices itself at the end of the turn.

So, what could this strange combination of effects possibly be useful for? Well, in combination with Death's Shadow it acts as a pseudo Temur Battle Rage; with Kroxa, Titan Of Death's Hunger it allows you to play the titan for two mana; and with Thing In The Ice it removes all ice counters, just to name a few. Dress Down can also prevent ETB (enter the battlefield) triggers and death triggers. Furthermore, it disables annoying keywords like indestructible or hexproof, as well as blanks equipment (sorry, Hammer Time) to make removing enemy creatures easy. In summary, what is Dress Down not useful for? 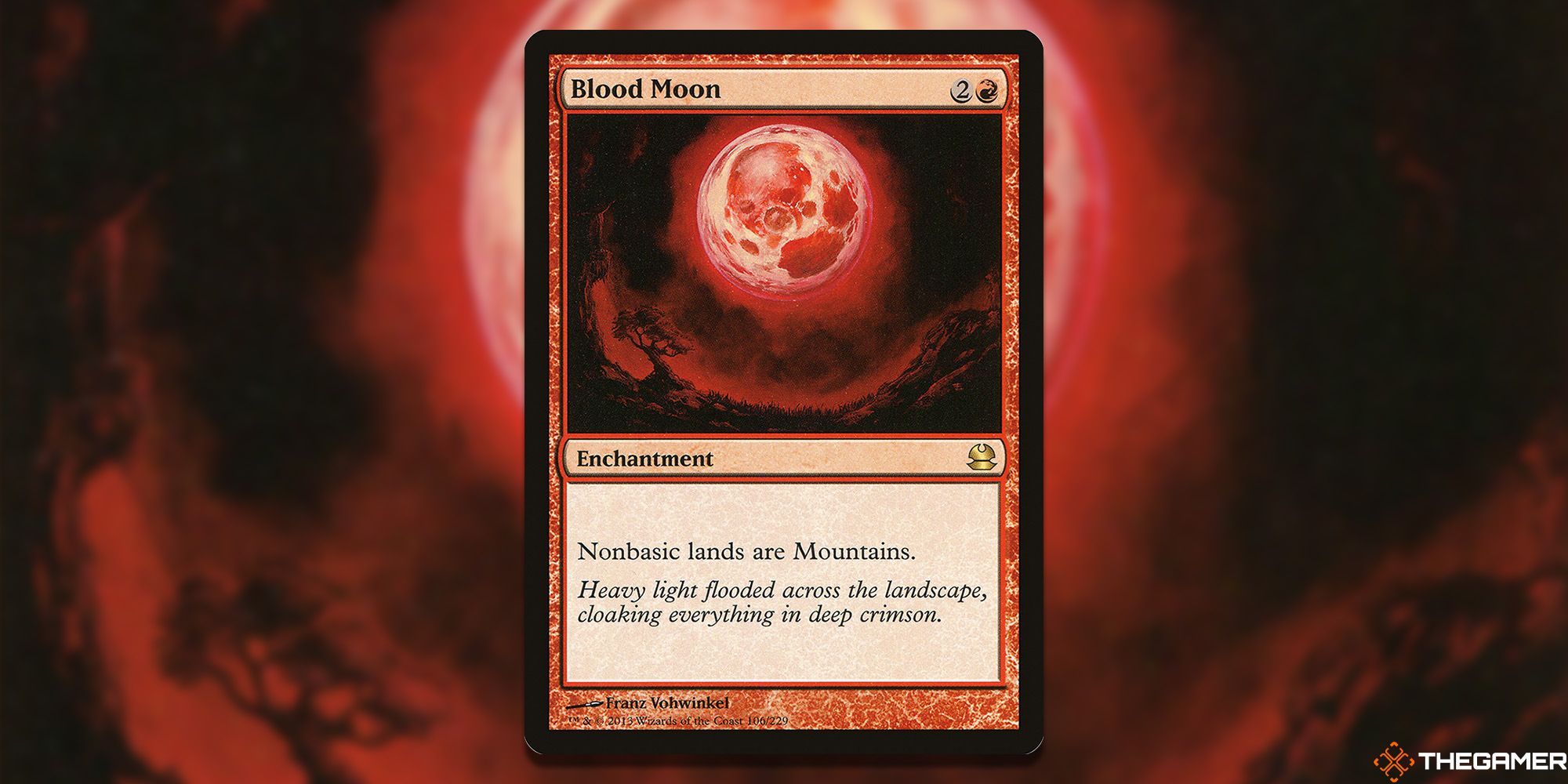 Returning to Modern's enchantment roots, Blood Moon has long been the enchantment of many player's nightmares. While it's not quite as effective as it used to be in single-handedly winning games, this three CMC enchantment often packs a bigger immediate punch than most cards in the game.

Ask anyone whose been playing Blood Moon for some time, and they'll tell you about a game where they resolved this card on turn three and their opponent immediately scooped (surrendered). There's nothing that upsets Magic players more than being told that they are no longer allowed to play cards. For this reason alone, Blood Moon deserves to retain its spot as the best enchantment in Modern — at least for a little while longer. Oops, all mountains!