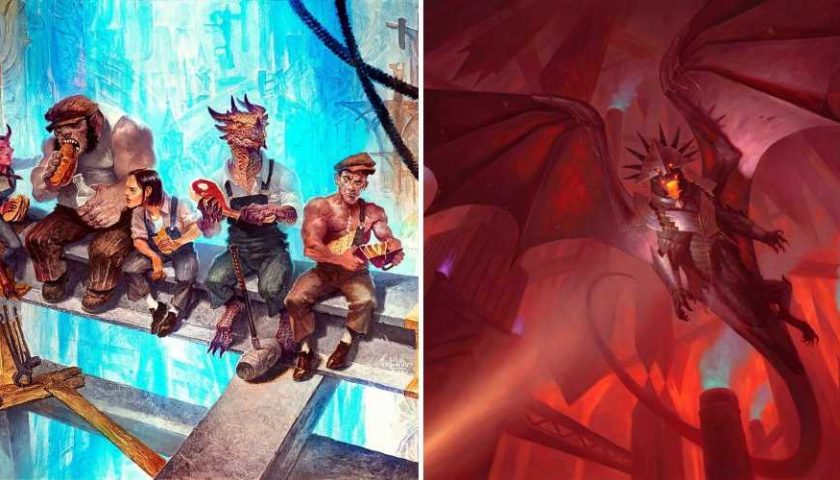 Blitz is a new mechanic introduced in Magic: The Gathering, the Streets of New Capenna, that allows a player to play a creature card by paying an alternative cost for it. The card then enters the battlefield with haste and the text "when this creature dies, draw a card". It also must be sacrificed at the beginning of the next end step. At first glance, this ability appears to be a reincarnation of the well-worn dash mechanic from Dragons of Tarkir.

However, upon closer inspection, blitz supports many more lines of play than the dash mechanic ever did. For starters, blitz turns your creatures into damaging cantrips, and cantrips have always had a good reputation throughout Magic history. On top of that, blitz cards may just serve well for sacrifice matters decks. And this is all the while filling the same shoes of performing in aggressive strategies just like dash. With all that being said, here are the ten blitz cards printed in Streets of New Capenna from weakest to strongest. 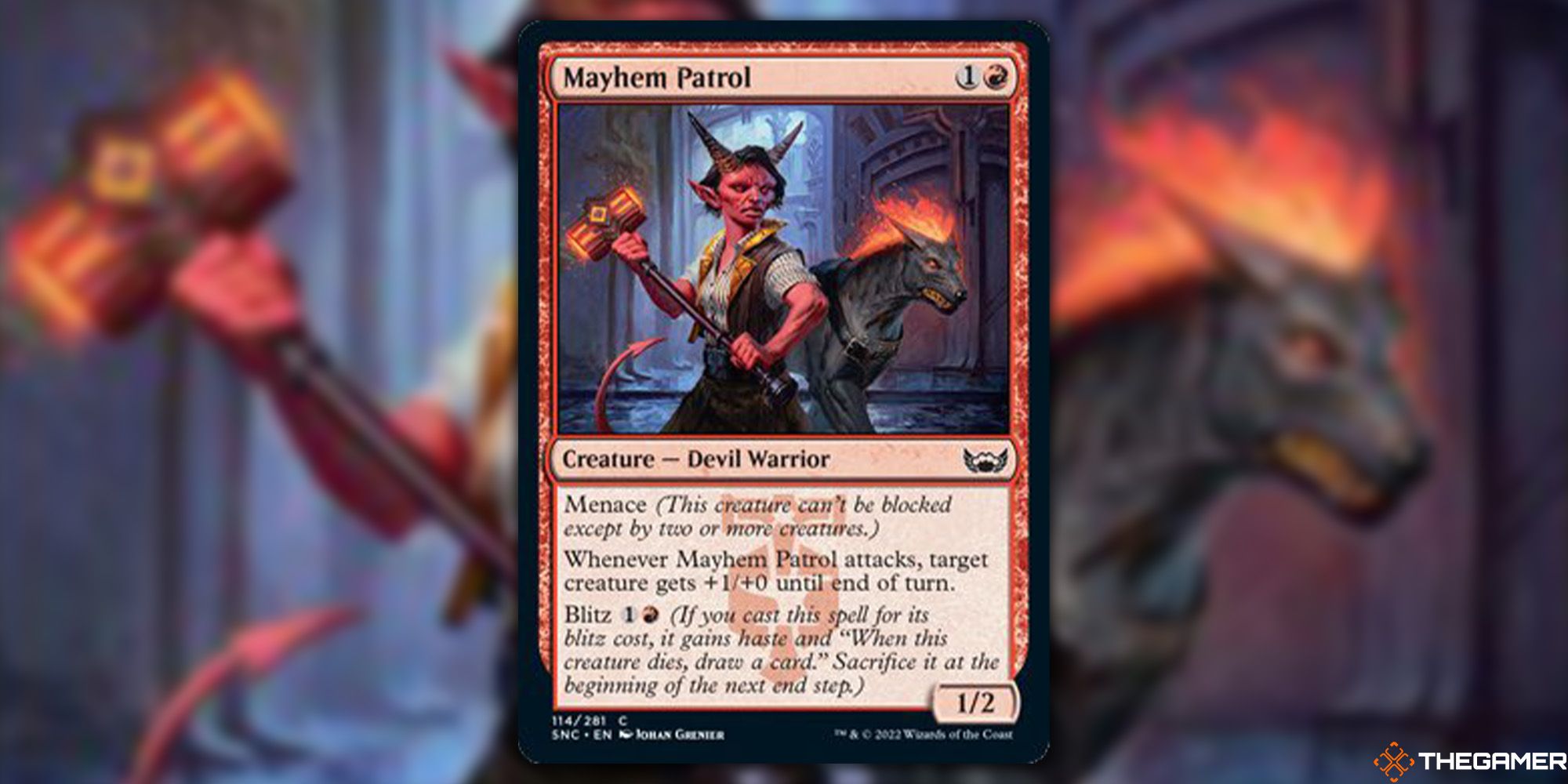 The least exciting of these new blitz cards is Mayhem Patrol. For all intents and purposes, this card's blitz effect might as well say deal two damage and draw a card. Unfortunately for Mayhem Patrol, that would make the card a lot better than it actually is. There will likely be some Limited games where this card happens to luckily blitz in for lethal thanks to menace, but barring that there's not much going on here.

Mayhem Patrol is better off played for its normal cost, which is probably why its blitz cost equals its actual mana cost. Nonetheless, this card can possibly cantrip into something more useful in the late game. 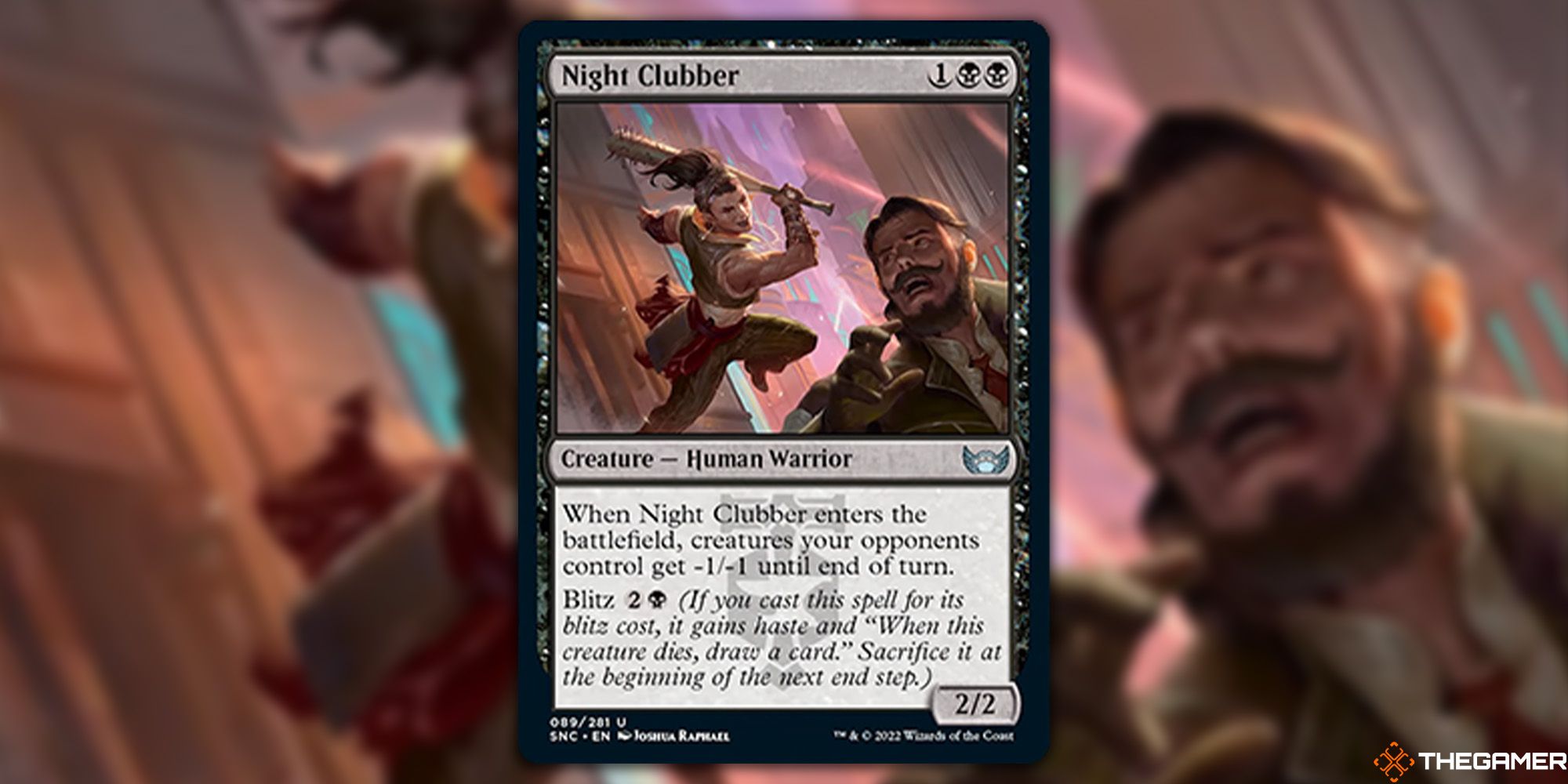 Here's an easy answer to the cabaretti guild as well as the swarms of 1/1 human tokens that will be running around in Limited. Not only that, but Night Clubber can also really make blocking a nightmare for your opponents the turn it enters the battlefield.

This is a great Limited card that shouldn't be hard to get value out of in the format if you're running an aggressive strategy. Furthermore, Night Clubber may just peak its head out of some Standard sideboards depending on the meta. 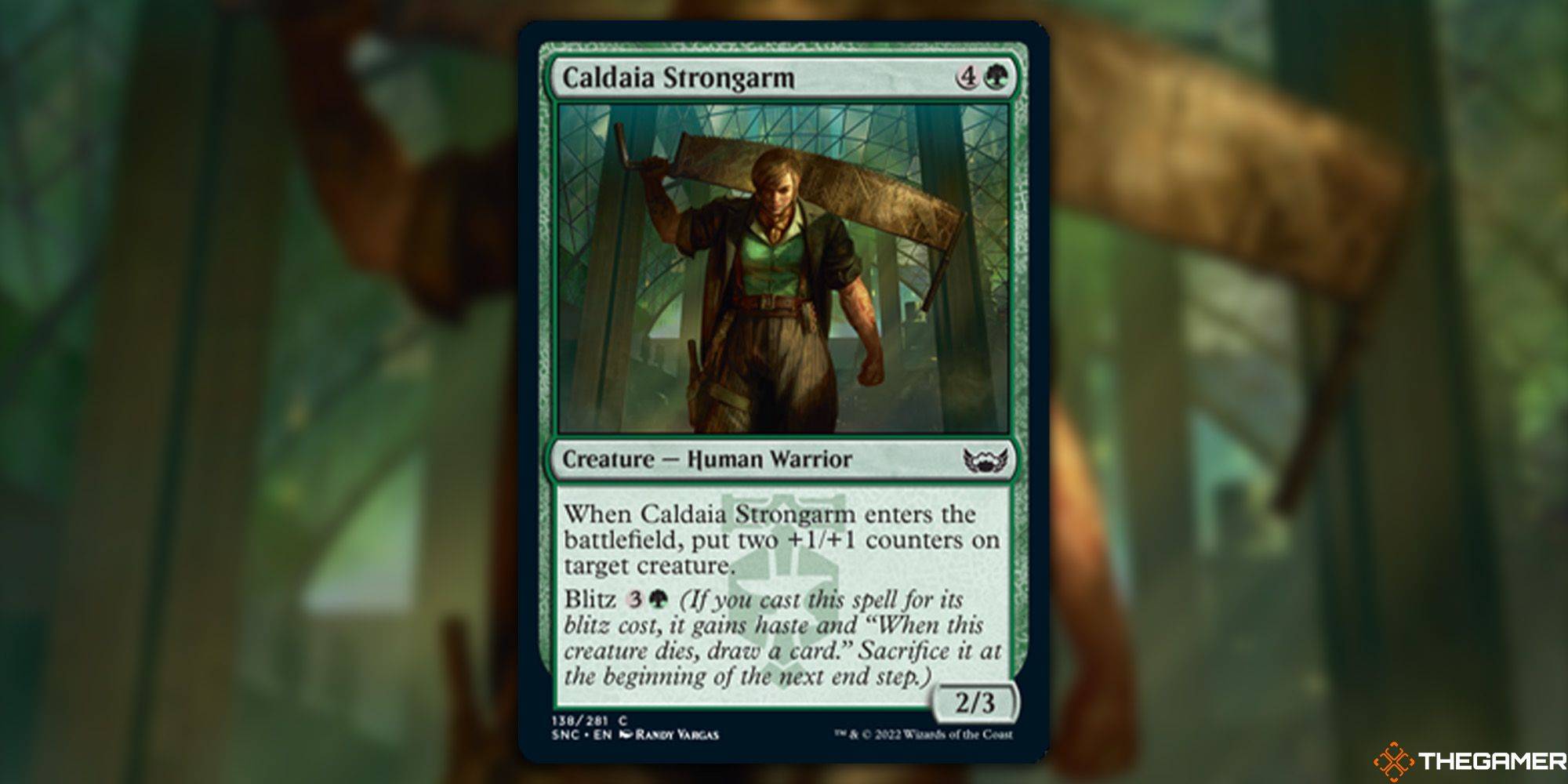 Counters can be game-deciding when it comes to Limited combat, and Caldaia Strongarm is here to deliver a couple.

It would have been nice to see this card printed with three power instead of three toughness, but it still does a fine job of keeping the pressure on. Dropping the Strongarm's counters on a flier seems like a good way to turn a negligible creature into a game-ending clock. 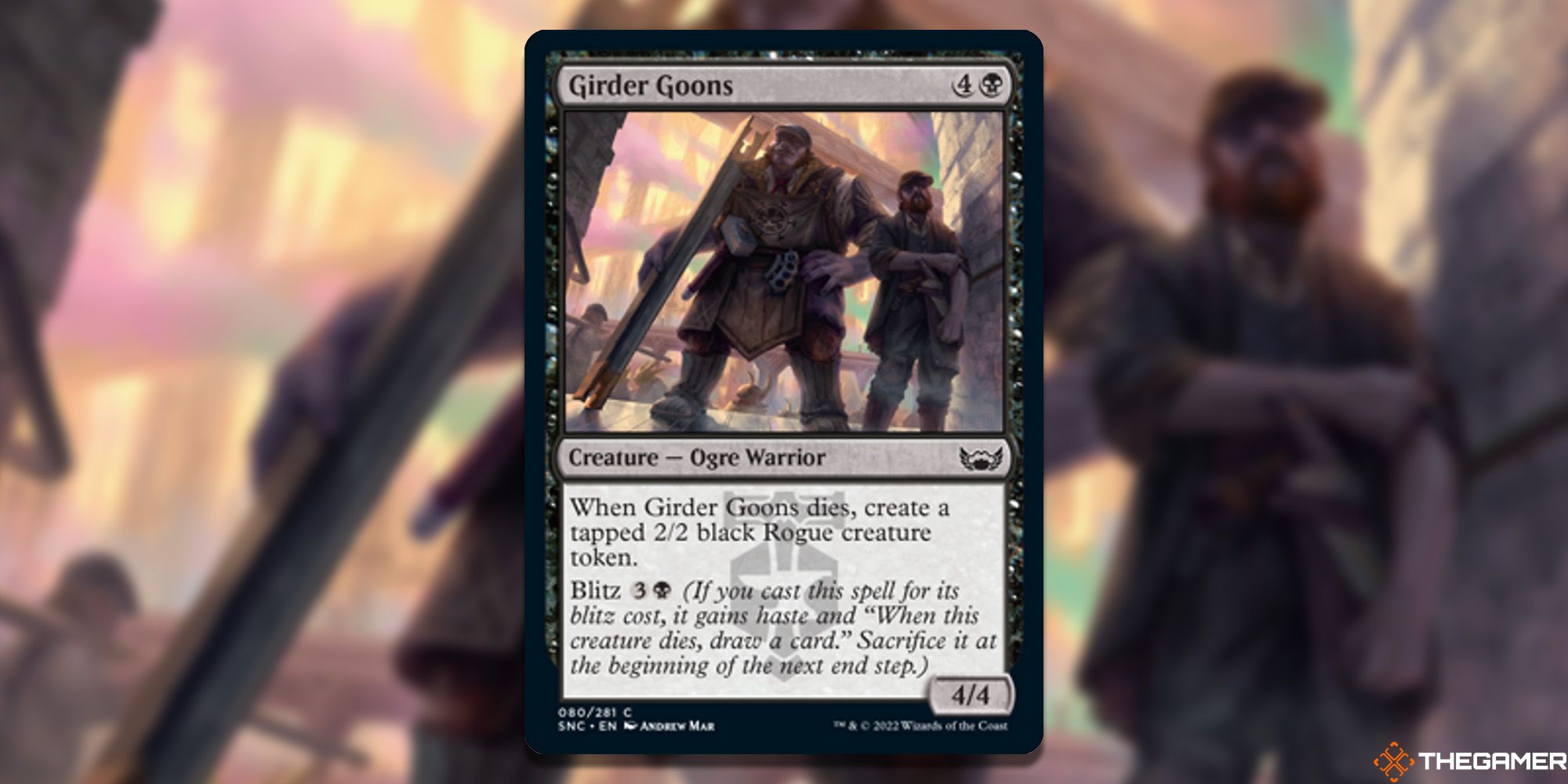 The downfall of the blitz mechanic is that you sacrifice board presence for face damage and card advantage. However, Girder Goons makes that downfall slightly less painful by leaving behind a token.

This card slots nicely into aggressive, midrange, and even control strategies despite the token entering the battlefield tapped. 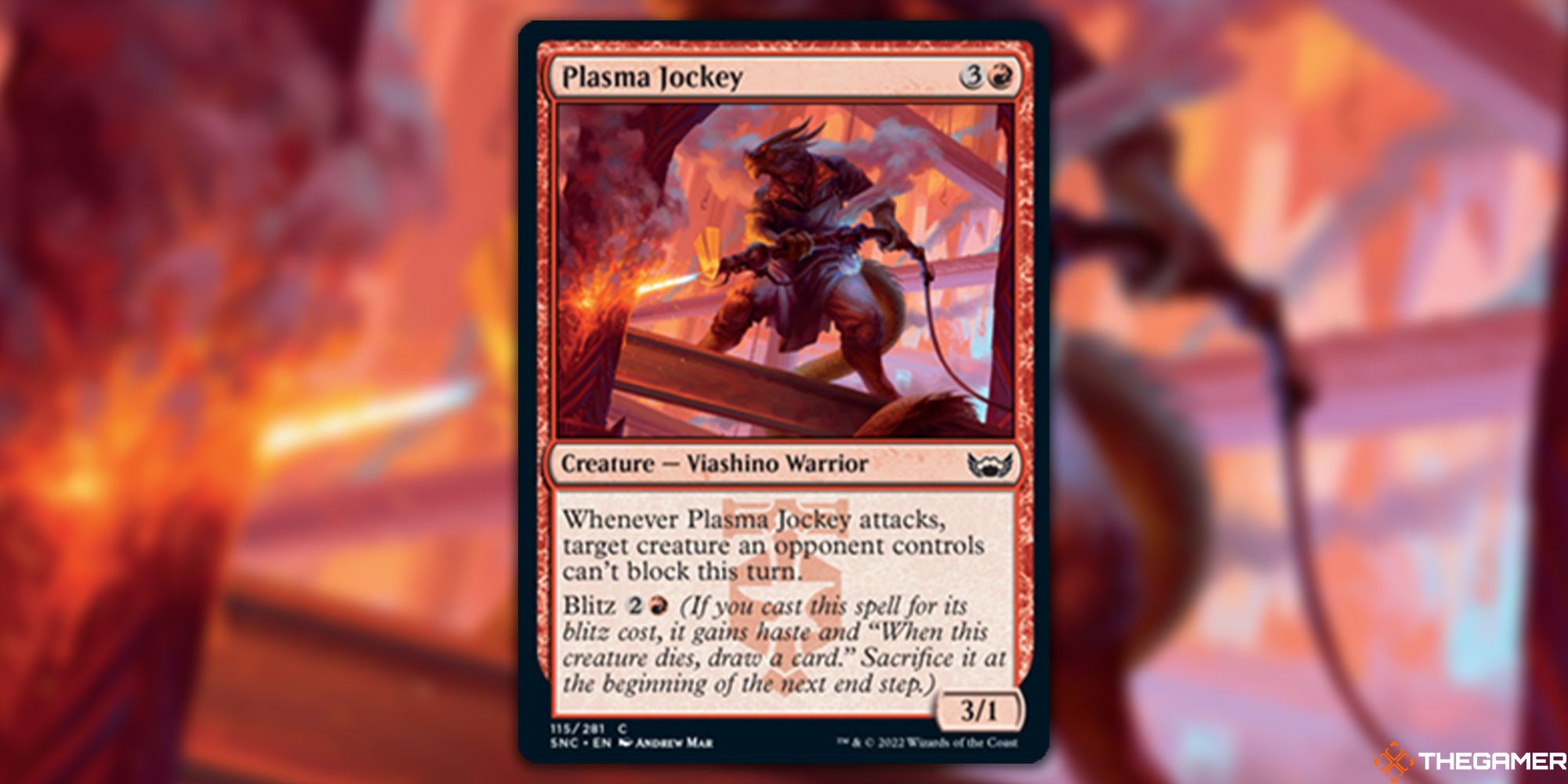 If you're interested in blitz, chances are you lean towards aggressive strategies in the first place. Assuming that's the case, here's a common that ought to turn your head.

Preventing a creature from blocking is the perfect effect for a deck looking to close the game quick, and Plasma Jockey accomplishes that while also swinging in for three and replacing itself with a new card to keep the gears turning. Red players rejoice. 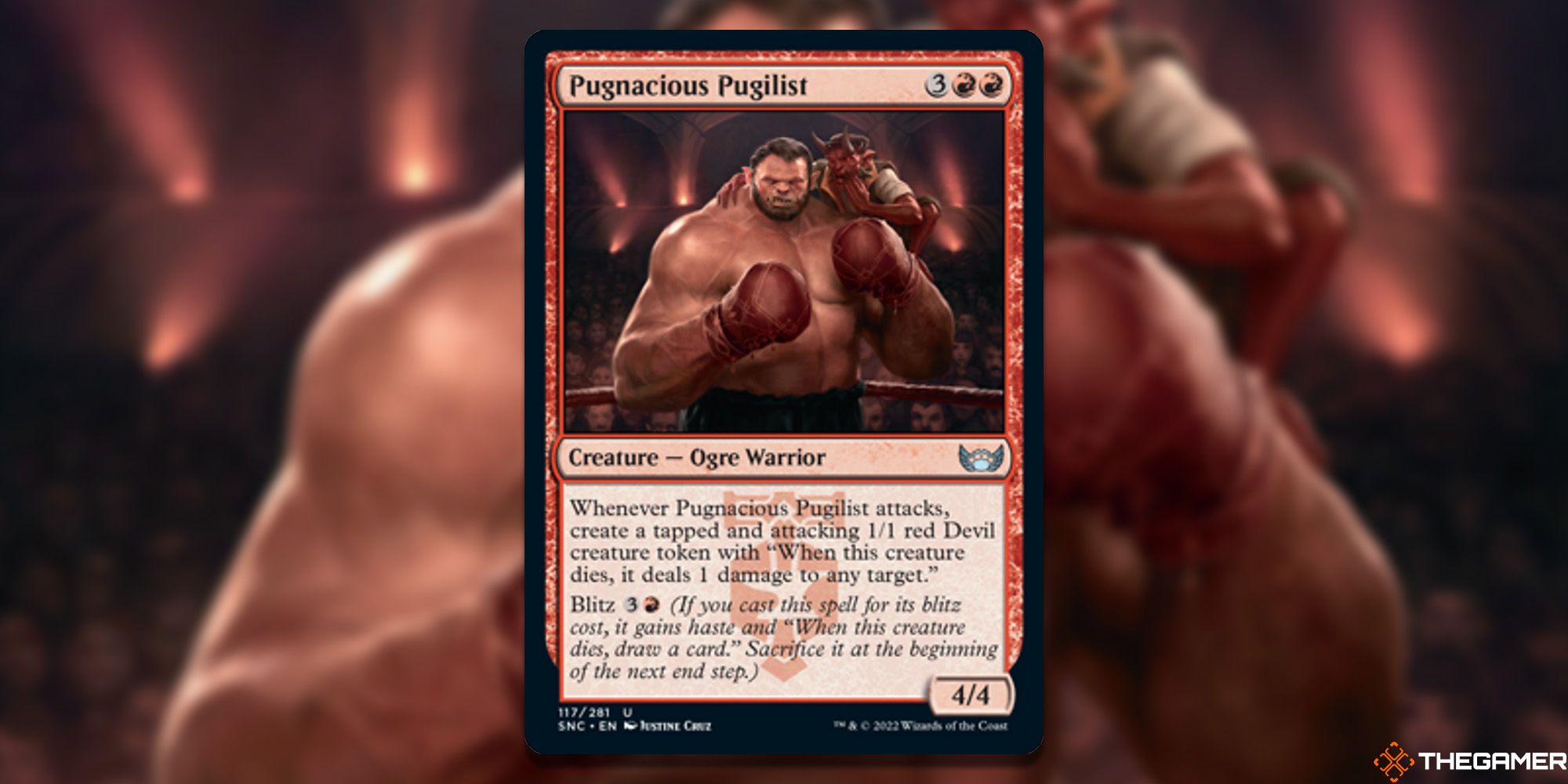 Speaking of tokens and keeping up the pressure, here's a card that does both. This Pugilist swings in with a big body as early as turn four and leaves behind a cheeky devil token that can ping one of the many one toughness creatures running around in Streets of New Capenna Limited.

It's notable that this card is probably better played for its normal cost of five for repeated token generation, but it's nice to have the blitz option. 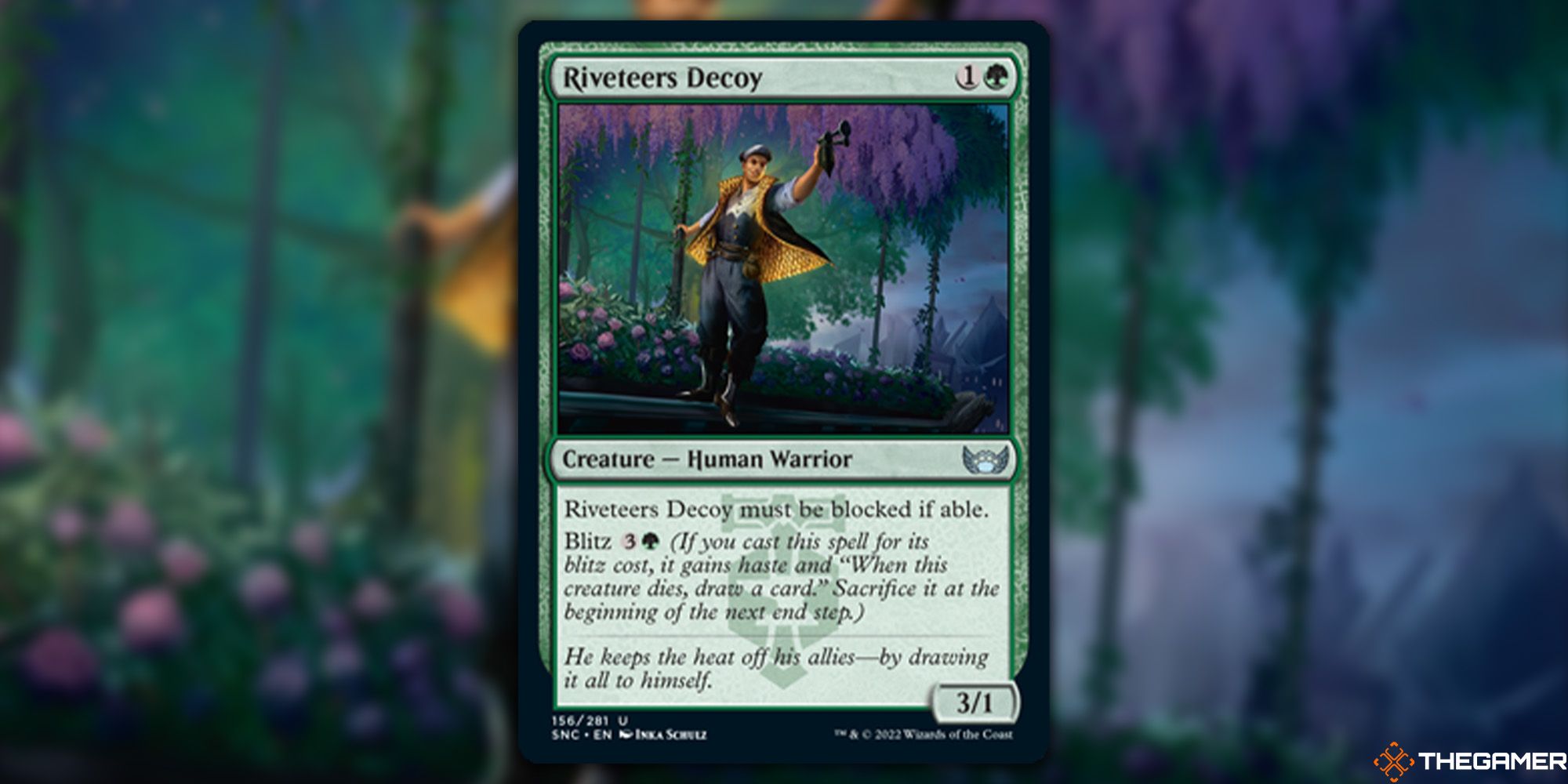 Here's a creature that can act as pseudo removal in a pinch. We've all been in that terrible spot where your opponent stonewalls your one and two power creatures with a single three toughness monster. Thanks to Riveteers Decoy, however, aggressive players will have some relief from this annoying and all too common situation. 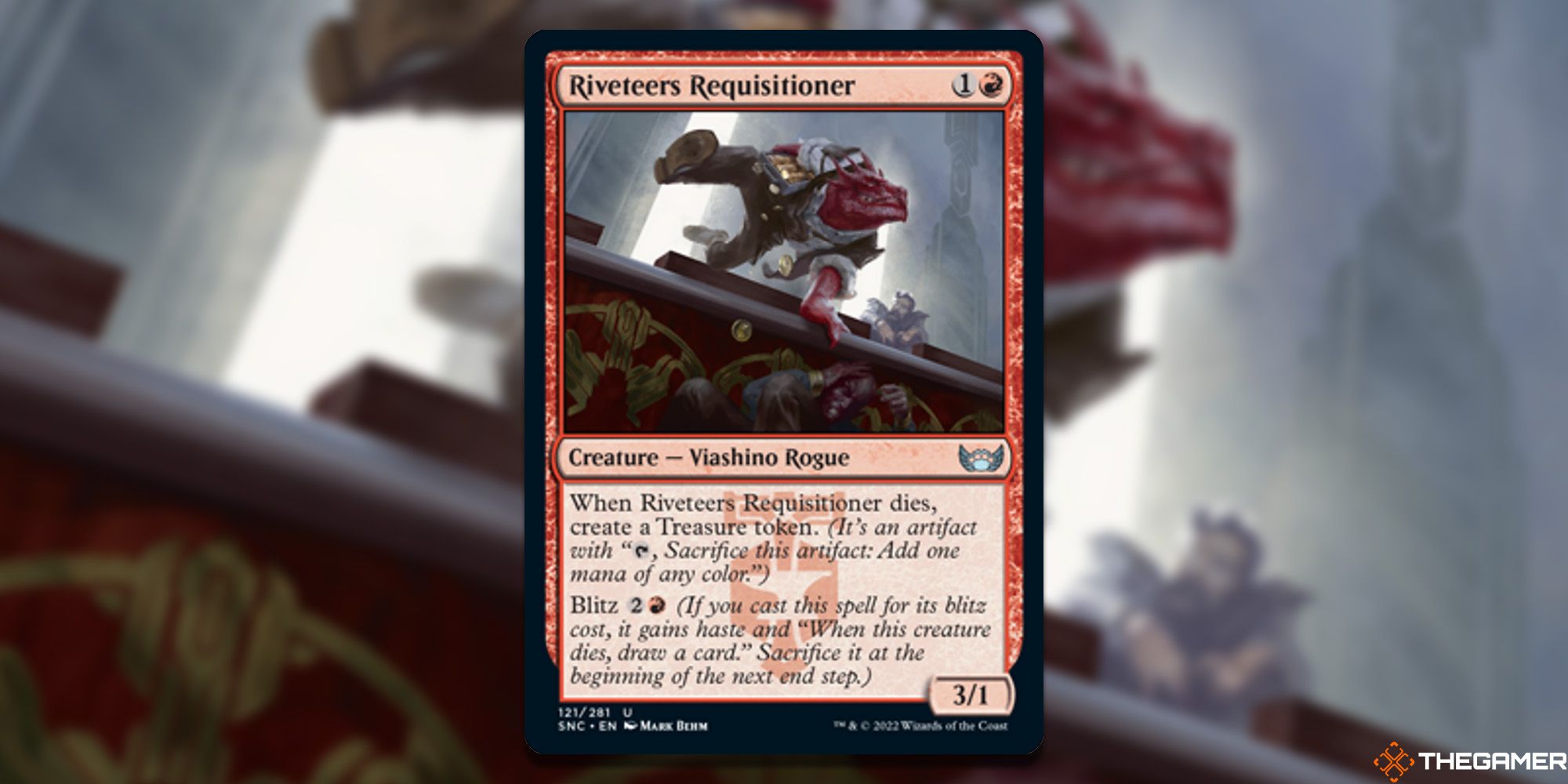 This Viashino creature-type bad boy is oozing with flavor, but we're not here to talk about how well mechanics mirror a card's story. The Requisitioner may appear underwhelming, but there's a reason this card's blitz cost actually costs more than its normal cast. The reason is treasure tokens are incredibly strong.

This card reliably ramps you to five mana on turn four while also continuing to pressure the opponent. The question is what five mana cards provide a huge payoff for coming out a turn early? Ramp aside, this Requisitioner also becomes especially intriguing when used in tandem with the newly printed Professional Face-Breaker. 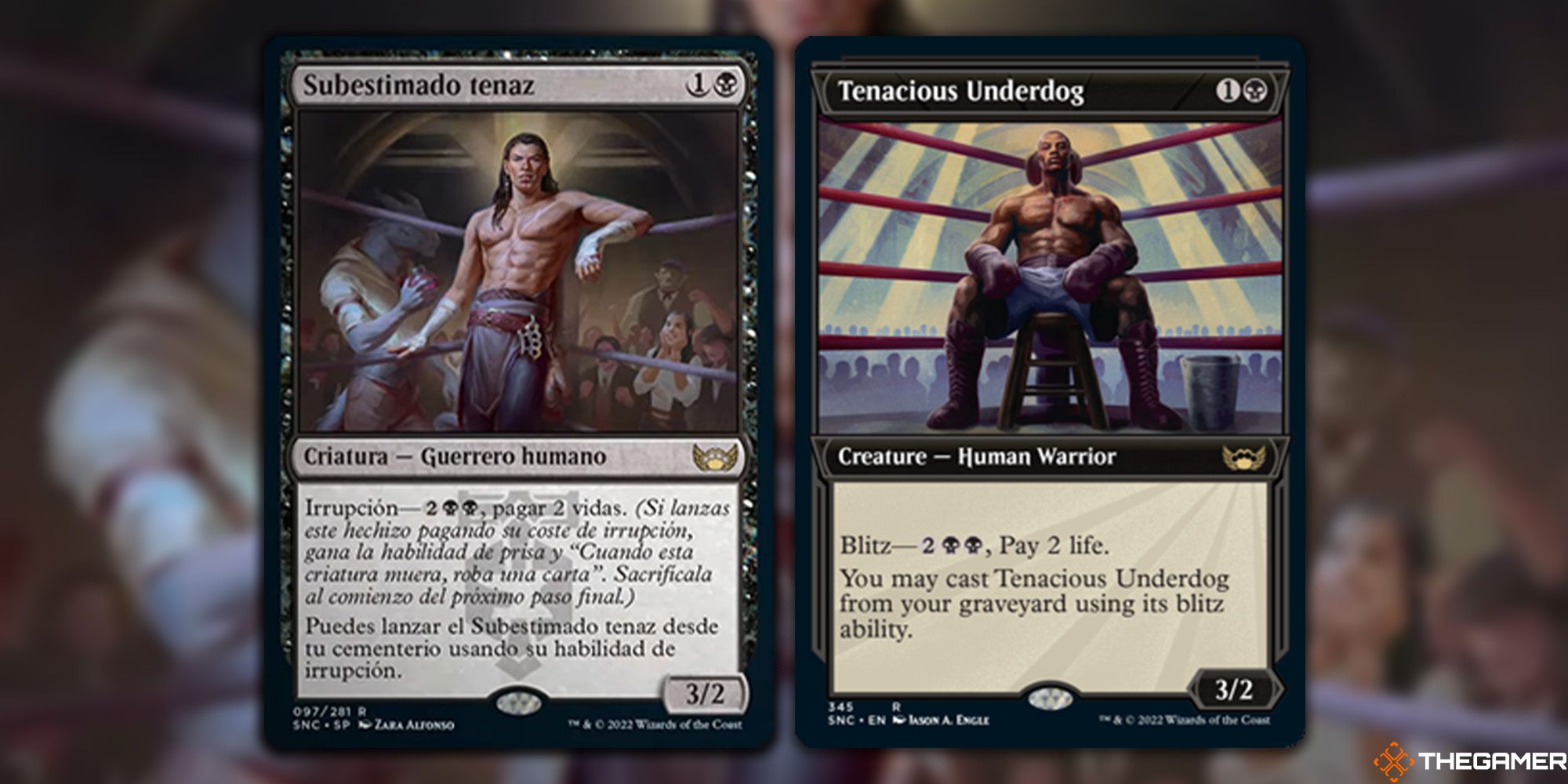 While blitz is a mechanic that's likely going to make most of its rounds in Limited, these next two cards might just have a shot at Constructed through Standard. Tenacious Underdog is the first of the two, providing an aggressive body for two in the early game as well as some recursion at the cost of life later on.

Chances are this card just isn't quite powerful enough of a creature to make waves in Constructed, but it's still one of the best blitz cards printed in the set. 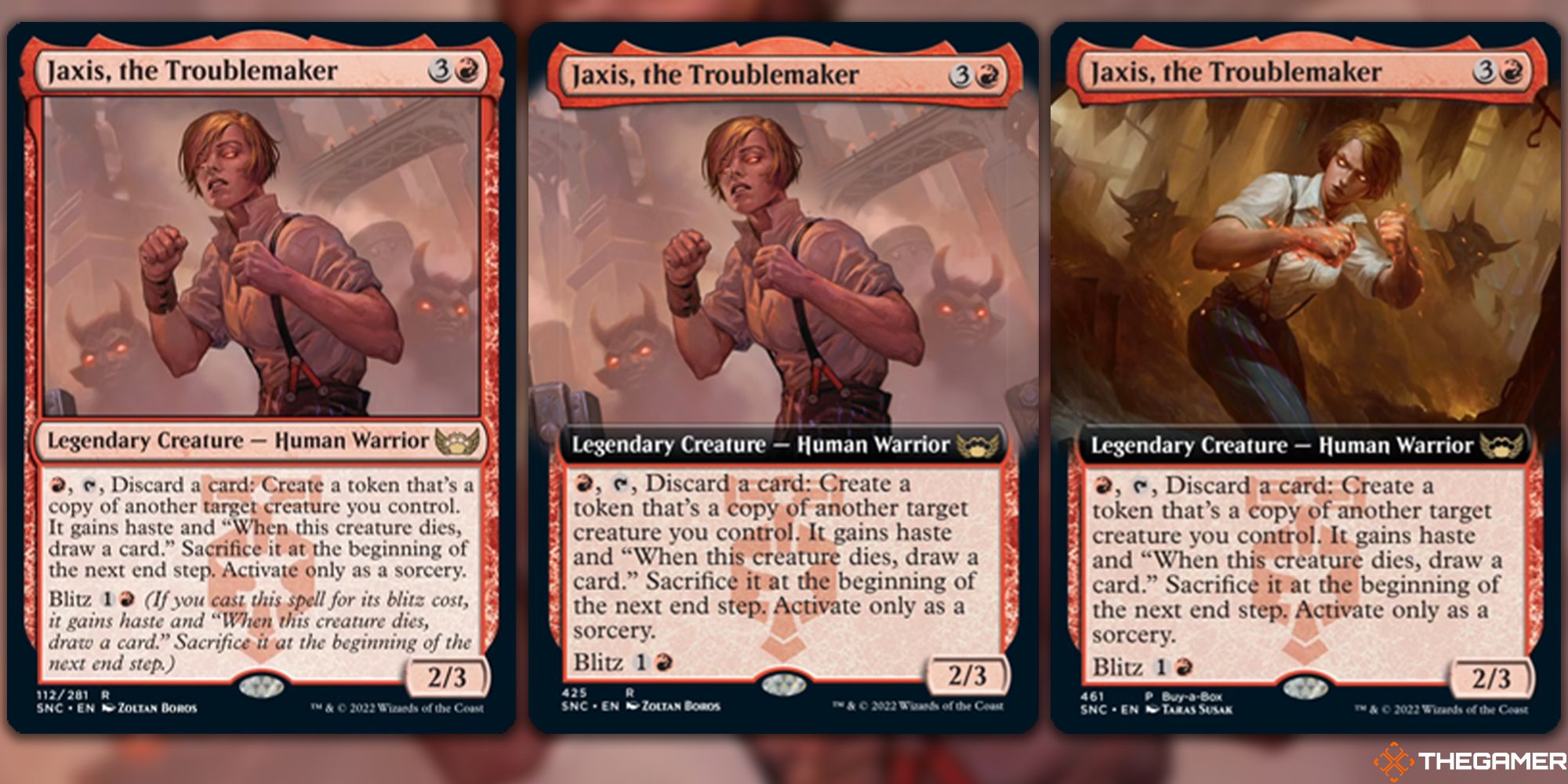 Last but certainly not least, we have Jaxis, the Troublemaker. This is a blitz card that really packs a punch. Again, it would have been nice to see this card printed with three power instead of three toughness, but that seems to be the theme with these blitz prints. Nonetheless, Jaxis' low blitz cost of two coupled with the use of its activated ability could lead to some interesting plays.

At the cost of discarding a card, Jaxis essentially allows you to make a blitz copy of a creature you already have in play. All of the cards players have been tempted to copy with Fable of the Mirror-Breaker are good targets here, and, unlike Reflection, Jaxis doesn't require a four-turn setup. Only time will tell whether this card finds a home in Standard, but the implications are undeniably exciting.