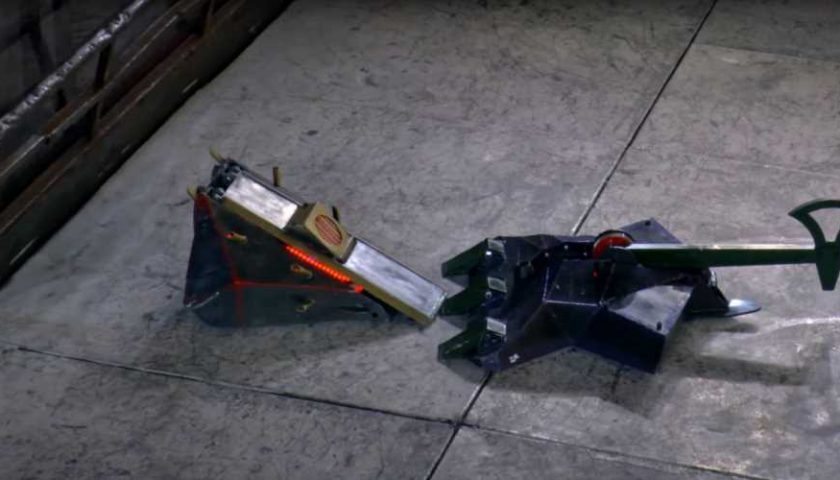 We’re less than two weeks away from The Brothers War being unleashed in Magic: The Gathering, and what better way to celebrate a set dedicated to artifact destruction than with robots beating lubricant out of each other?

Magic has teamed up with Extreme Robots to answer the question of who would win in a real-life fight between Urza and Mishra, the two brothers that go to war over the Mightstone and Meekstone. On Team Urza, we have Magic content creators Kiwo and RT Game, while Team Mishra is represented by M4ngo and Spiffing Brit. Both were matched up with actual robot engineers to create their bots, with Urza featuring a standard wedge-shaped design with a flipper and Mishra taking on a Phyrexian’s jagged appearance with a swinging axe.

Unlike normal Robot Wars, where the objective is to simply destroy or disable your opponent in an obstacle-filled arena, the Magic X Extreme Robots war involved a few preliminary challenges. First, an obstacle course to test the controls on Urzabot and Mishrabot. Neither proved particularly precise as both had a tendency to slam into rocks, adding many seconds to both their times. Team Urza emerged as the winner, but only by a few rocks.

Next, both teams were asked to deliver power stones from one end of the arena to the other. Urza’s speed and overall design made it the more efficient power stone shoveler, once again knocking Mishra down a peg. The final trial was all about smashing "phyrexian eggs," which were actually watermelons. Although Mishra’s axe was theoretically ideal for cracking open eggs, Urza’s unorthodox flip-and-smash strategy once again beat Mishra.

It was starting to look like Team Urza would sail to an easy victory, but the final combat trial produced an unexpected upset. The fight began with Urza taking an offensive lead, but Urza’s compassion eventually resulted in Mishra turning the tables, disabling Urazbot and winning the match.