We're officially at the halfway point of Magic The Gathering's Streets of New Capenna previews. Today is the smallest day of the entire preview season, with just seven cards, but there are a few really interesting pieces here to make up for it.

Today, we have a potent new black lifegain piece, a long-overdue reprint, and the first equipment ever that attaches to Planeswalkers. We've also got some goofy-looking fish tokens with scary counter-copying capabilities. Here is everything announced on day four of the Streets of New Capenna preview season. 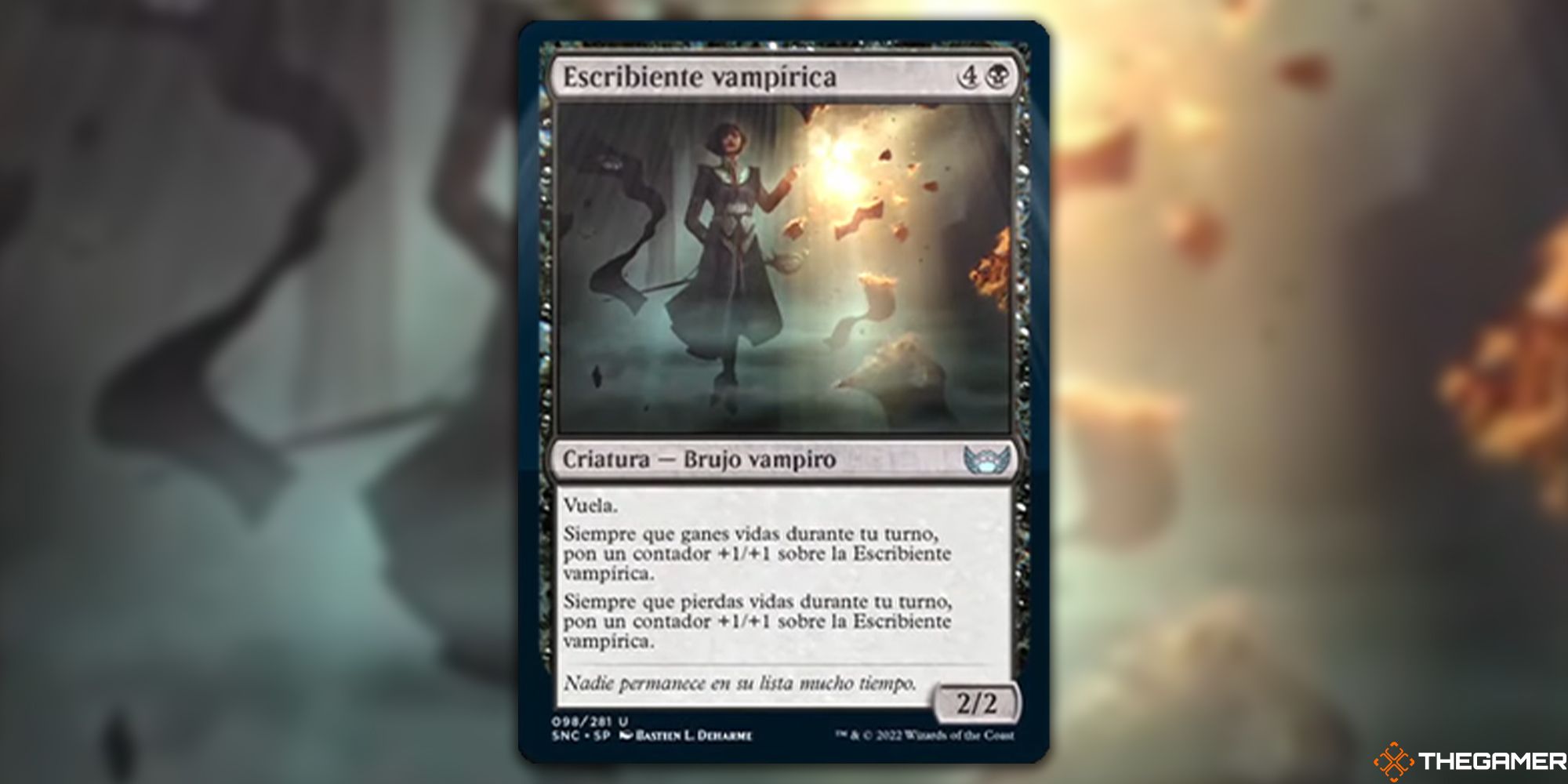 Cards that get +1/+1 counters whenever you gain life aren't uncommon, though they tend to be more white than black. Giving you a +1/+1 counter whenever you lose life, on the other hand, is much more uncommon. Put this in a deck where you're doing both (Phyrexian Arena and Soul Warden in an Orzhov deck, for example) and you'll be getting one big flying Vampire. 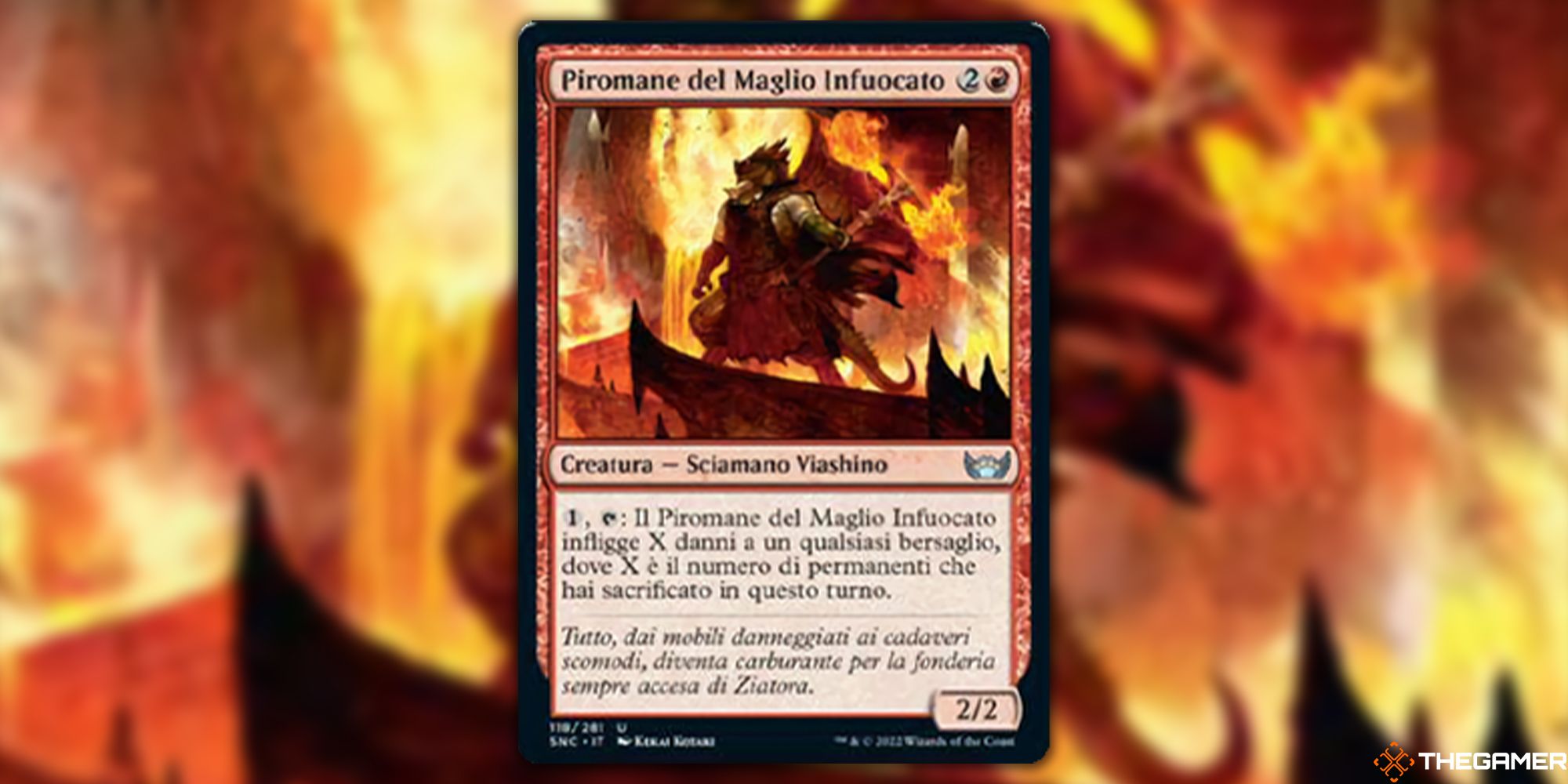 New Capenna is full of permanents to sacrifice, whether it be Treasure tokens or creatures to casualty. Depending on how you use it, Fire Maul Arsonist could either be a quick and dirty piece of removal or an entire win condition on its own. 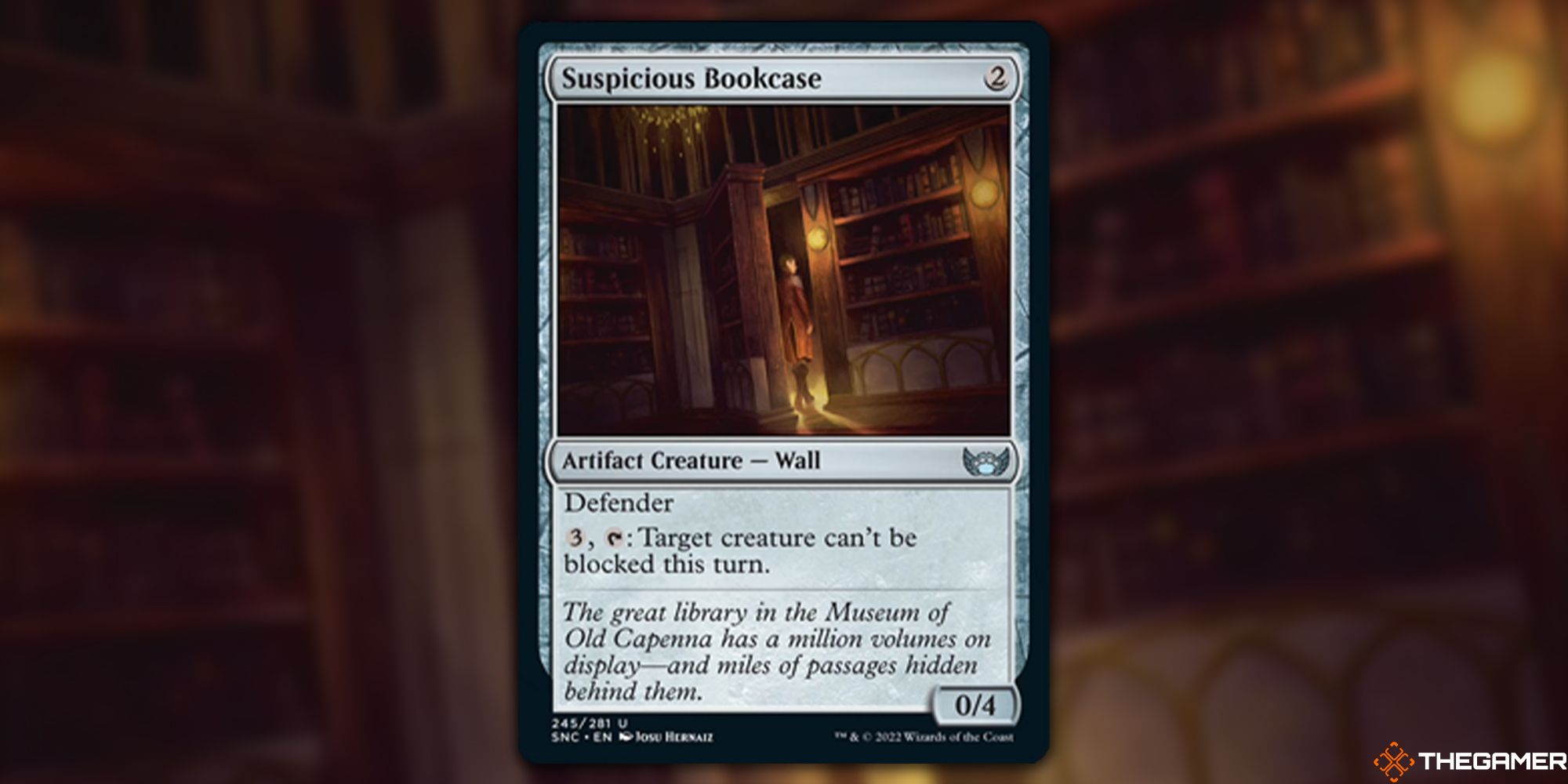 Suspicious Bookcase's debut in Magic 2019 was the last time we saw it in Standard, so it was well overdue for a reprint. There are easier ways to make creatures unblockable in eternal formats, which has led to some players feeling a bit flat about this reveal. But in Standard, where we've also currently got a lot of ninjutsu floating about from Kamigawa: Neon Dynasty, this could be a big player.

Equipped creature gets +1/+1 for each counter on it.

Equipped permanent isn't a Planeswalker and is a creature in addition to its other types. (Loyalty abilities can still be activated.)

This is easily the most interesting card we've seen in Streets of New Capenna so far, but it isn't quite the bomb some are thinking it is. Turning a Planeswalker into a creature lets it attack and block, but it's also a lot more vulnerable to removal. The neat thing about it is that, as it's no longer a Planeswalker, it's no longer bound to the normal rules of a Planeswalker.

For example, you could go to zero loyalty counters and still have it in play if it has any other kind of counter on it to ensure it stays about 0/0 power and toughness. Give it an indestructible counter through a Tyrite Sanctum, and you can just sit with it building up loyalty every turn.

It also makes commander damage a viable win condition for any Planeswalker-led Commander deck. Nahiri, the Lithomancer Voltron, anybody? 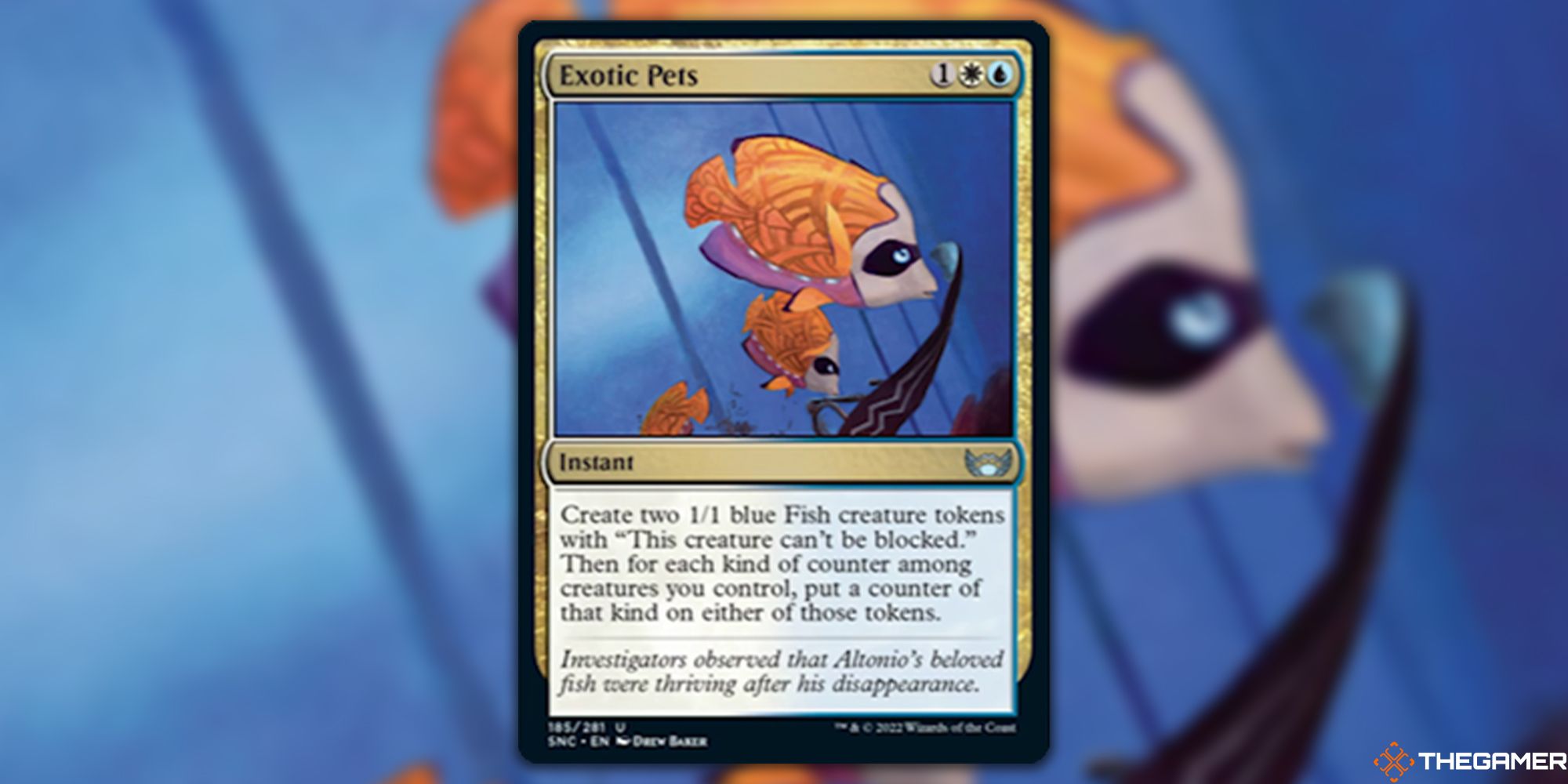 One generic, one white, one blue Instant:

Create two 1/1 blue Fish creature tokens with "This creature can't be blocked". Then, for each kind of counter among creatures you control, put a counter of that kind on either of those tokens.

Even the fish in New Capenna are art-deco criminals. There is a lot to be intimidated by for such an unassuming name like "Exotic Pets". Making two fish lets you dump all the counters on one of them for a troublesome attacker, while the other is still unblockable as prime ninjutsu fodder. 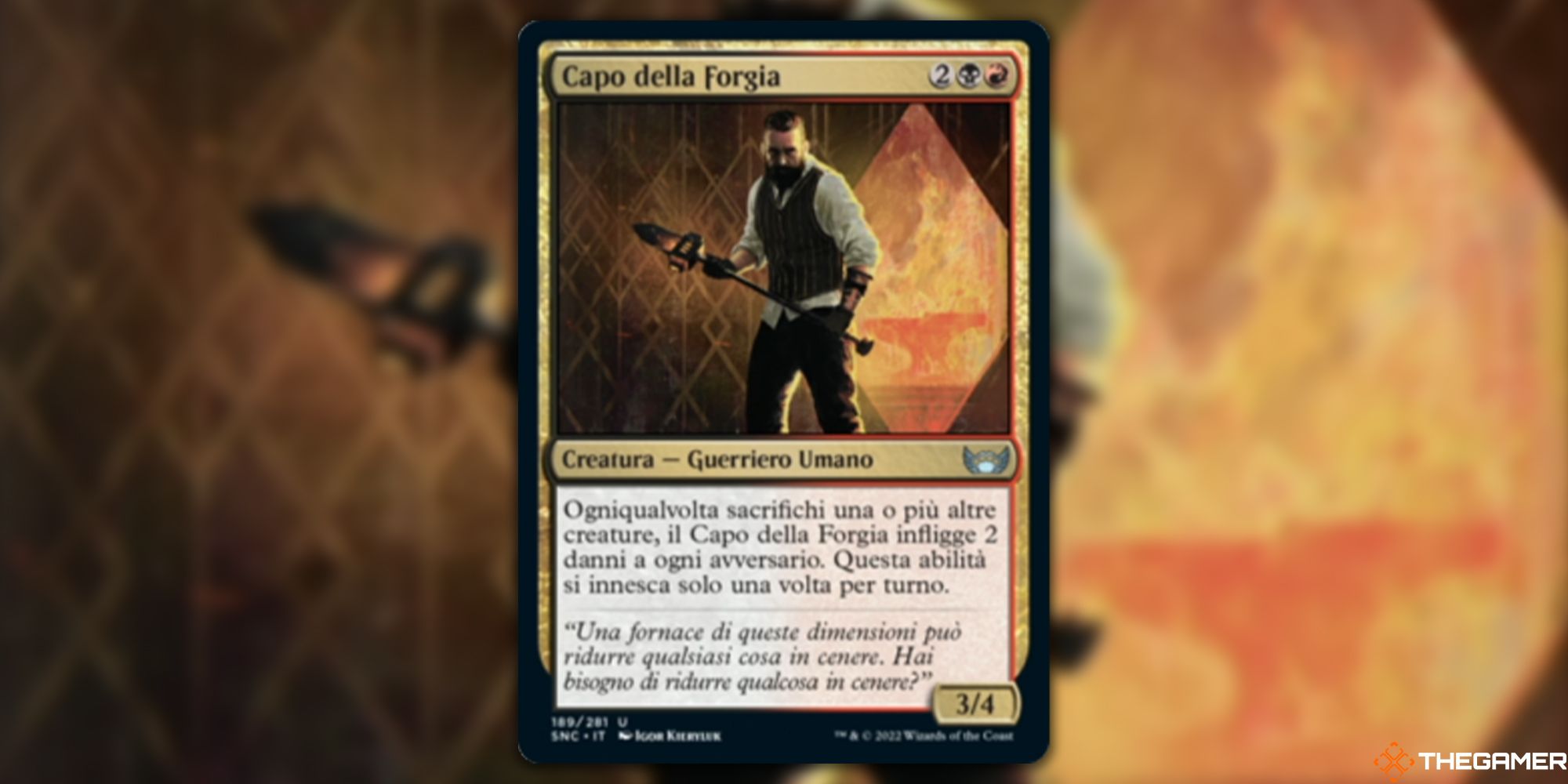 Whenever you sacrifice one or more other creatures, Chief of the Forge deals two damage to each opponent. This ability triggers only once per turn.

Turning your casualties into direct damage to an entire table isn't bad, and with how easy it is to set up endless sacrifice loops in some formats, that "once per turn" condition, for once, feels reasonable. 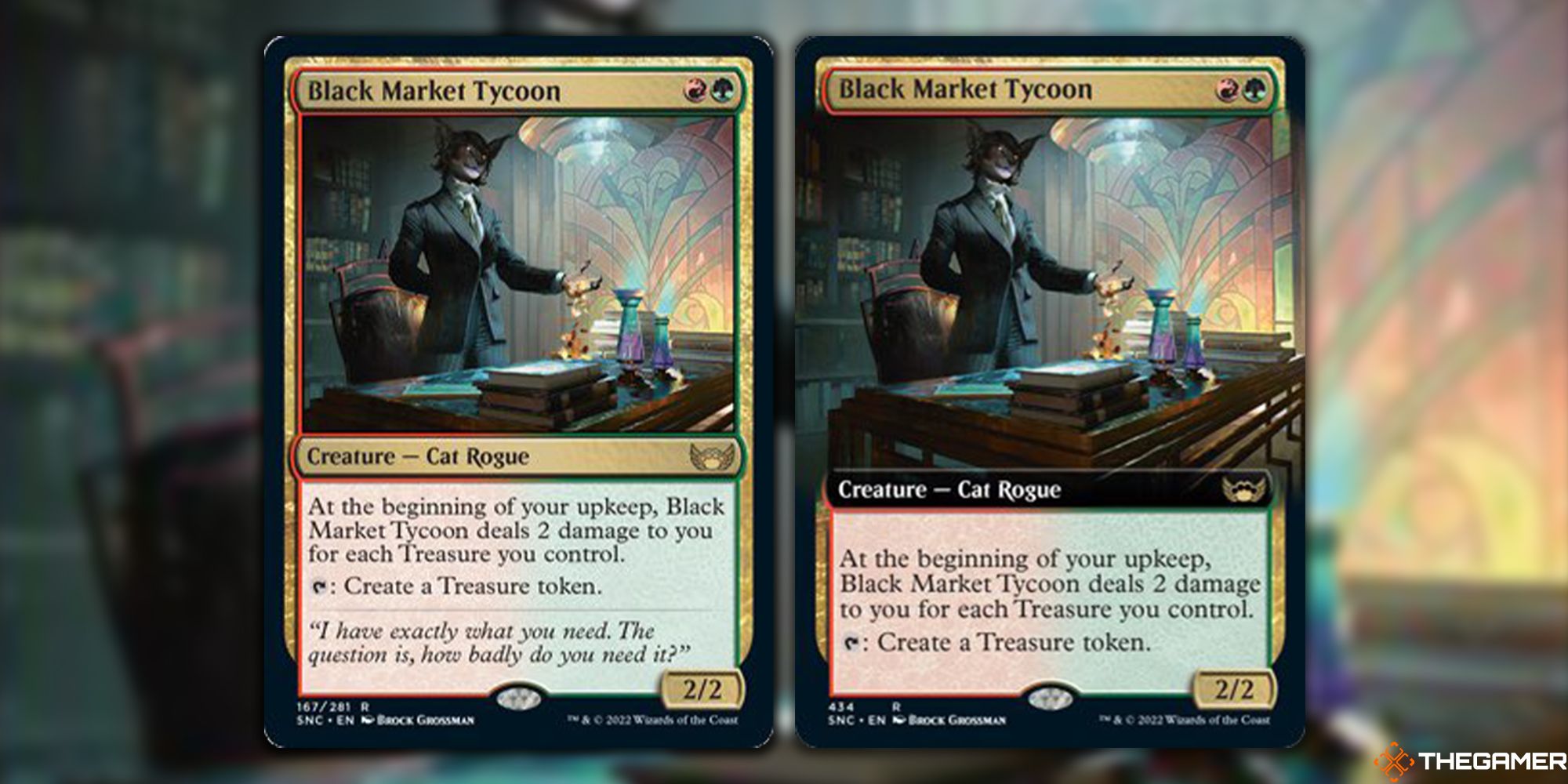 At the beginning of your upkeep, Black Market Tycoon deals two damage to you for each Treasure you control.

This design is fantastic. Black Market Tycoon gives you an easy way to make Treasures, but you'll need to use them all by the start of your next turn if you want to avoid taking any damage. In Standard, forgetting to use them could be a lethal mistake. In Commander, foisting control of this onto somebody else who is popping off with Treasures with a Harmless Offering or Wrong Turn could be a funny way to force them to ditch their mana advantage.