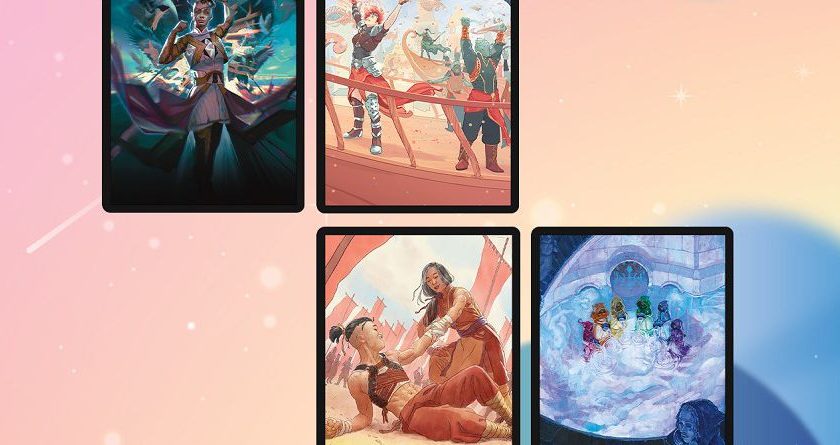 It’s not even Pride Month yet, but it’s never too early to get into the spirit. Wizards of the Coast has just announced its upcoming Secret Lair collection of alternate art cards for Magic: The Gathering, each of which has been illustrated by an LGBTQ+ artist. Fittingly, the collection is called Pride Across the Multiverse.

Launched in 2020, Secret Lair is a print-on-demand series that allows Magic fans to purchase customized versions of existing cards. These special sets are only available for a limited time, although in this case, the purchasing window is quite forgiving: Pride of the Multiverse will be available to order from May 4 to June 30. Wizards of the Coast will donate half of the proceeds to The Trevor Project, a nonprofit that provides crisis intervention and suicide prevention services to LGBTQ+ youth.

Stephanie Cheung, the art director for Pride Across the Multiverse, described the process as follows: “I looked for artists across the spectrum of LGBTQIA2S+ and BIPOC identities; having a breadth of artists is an important part of celebrating the diversity of our community and experiences.” Cheung also noted that “there was no way this collection of eight cards would represent every aspect of the community, but we wanted to honor the hope and joy found in our multifaceted identities.”

Cheung concluded by emphasizing the core qualities that unite these cards: “Each card in Pride Across the Multiverse tells its own story of love, struggle, resilience, joy, and community. Stories are how we practice hope, and I think it’s so important to hope, to really be in the practice of holding fast and remaining true. It is our triumph, and we will shape the future with our ferocious resilience.”

The set of eight cards costs $39.99 for regular finish and $49.99 for foil versions; they’ll arrive in a rainbow foil box. The order will also include codes for virtual card sleeves in Magic: The Gathering Arena; the four card designs in the image at the top of this article show off how those will look.