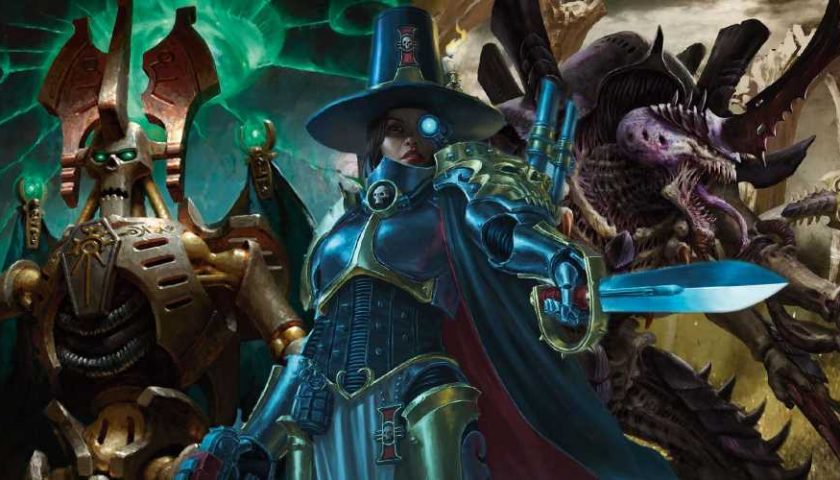 Today begins a full week of reveals for Magic: The Gathering's upcoming crossover with the world of Warhammer 40,000. All four of the new Warhammer 40K Commander decks will be fully revealed by week's end, but today we get a look at all four Commanders that will lead the various factions fighting in the far future.

In today's Bridging Worlds: Magic: The Gathering x Warhammer 40,000, D from the Node YouTube channel first described how Games Workshop and Wizards of the Coast shacked up for this collaboration and also the overall philosophy of the cards that comprise each deck. And then we got to see all four Commanders as they'll appear when the decks arrive later next month.

First we have The Swarm Lord, a terrifying general of the Tyranid swarm and the most deadly creature ever created by the Tyranid Hive Mind. Effectively a 7/7 with a converted mana cost of six the first time you cast it, The Swarm Lord gets bigger every time you re-cast it from the Command Zone. It also pairs well with token strategies as it lets you draw cards whenever one of your token-based creatures dies. 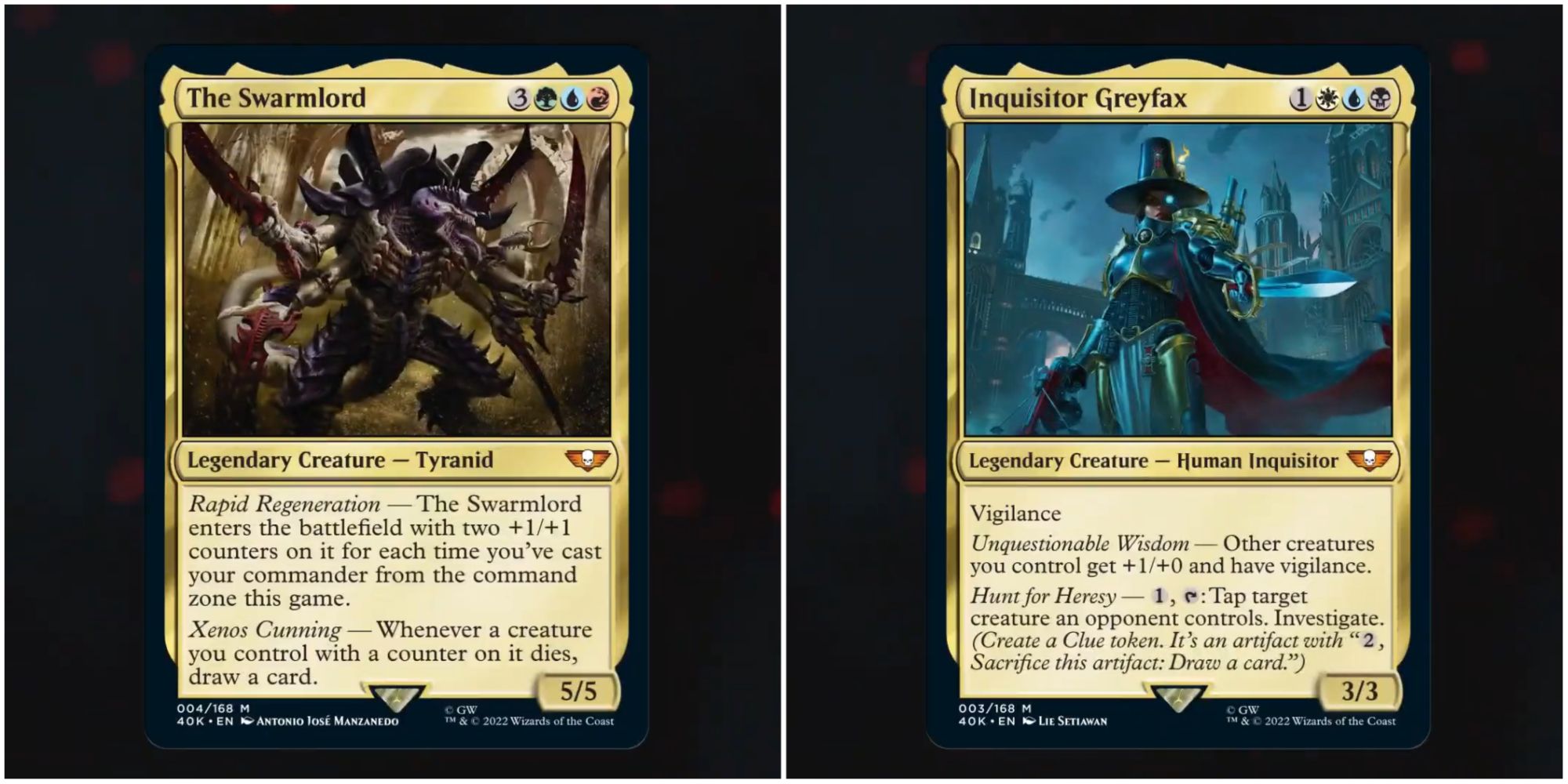 Inquisitor Greyfax exemplifies the Imperium of Man's brutal control over its citizens. She can enhance your board with Vigilance and additional attack power as well as tap down opposing creatures. As an Inquisitor, she also investigates reports of demons and psykers, leaving clues for players to draw cards from. Greyfax can work well in a multitude of decks but seems particularly well suited to artifact-focused themes.

Abaddon the Despoiler was already previewed months ago as the first teaser for the Warhammer 40K collab. His ability, Mark of Chaos Ascendant, can make for explosive plays by Cascading based on the amount of life opponents have lost in a single turn. 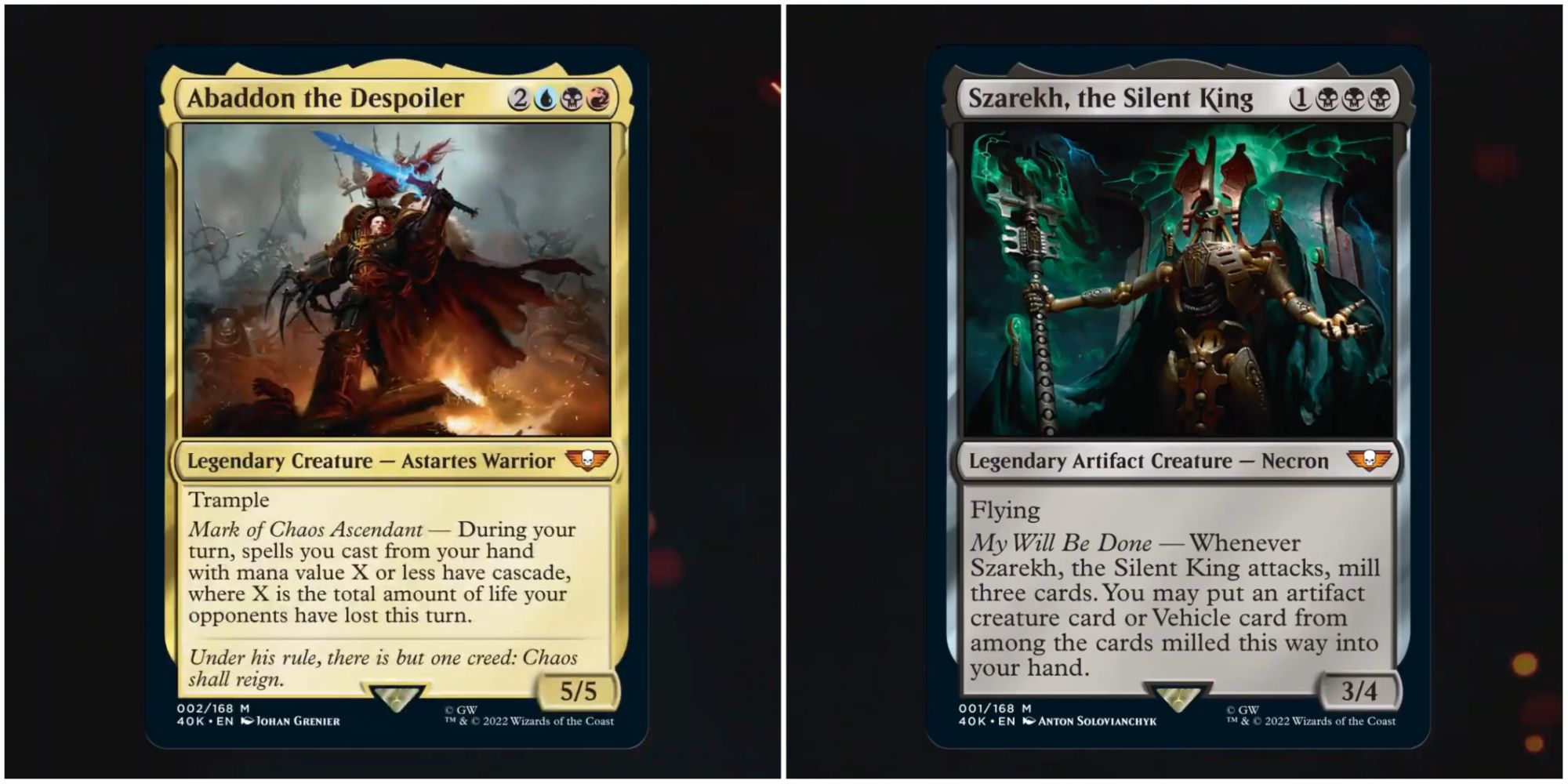 And finally, Szarekh, the Silent King is a 3/4 Flying creature that lets you mill your deck in search of artifact creatures or vehicles whenever he attacks. Clearly intended for an all-black artifact deck, expect to see Szarekh paired with Reiver Demon, Disciple of the Vault, and Cranial Plating.