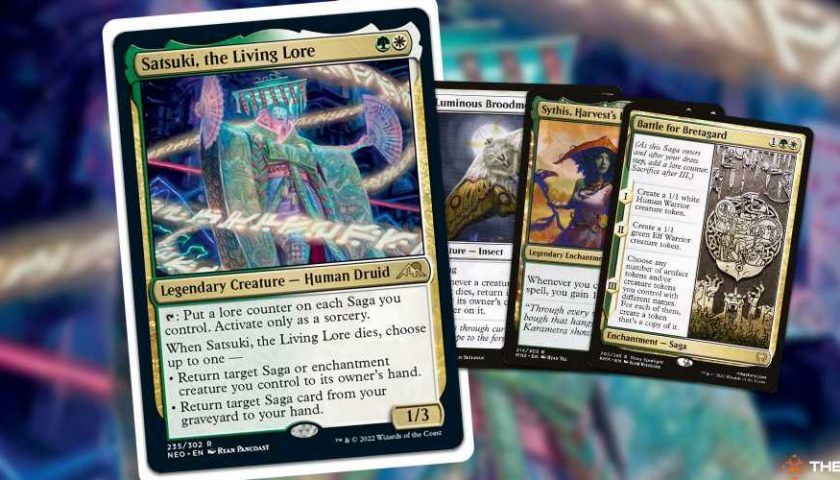 Previous deck: Myojin Of Roaring Blades // Next deck: Check back next week!

Although Magic The Gathering's plane of Kamigawa might be a high-tech cyberpunk world, much reverence is still placed on its past. Kamigawa's society is littered with legends and heroes, myths and stories passed down across generations, and some of the most important people on the plane are the Living Historians.

Tasked with remembering the tales of the Kami War that took place a millennium prior, the Living Historians serve to maintain Kamigawa's culture while warning the people of the present on the dangers of the fraying relations between them the Kami they live alongside. This week, we're playing with one of Magic's most popular enchantment types. We're going Saga Tribal with Satsuki, The Living Lore. 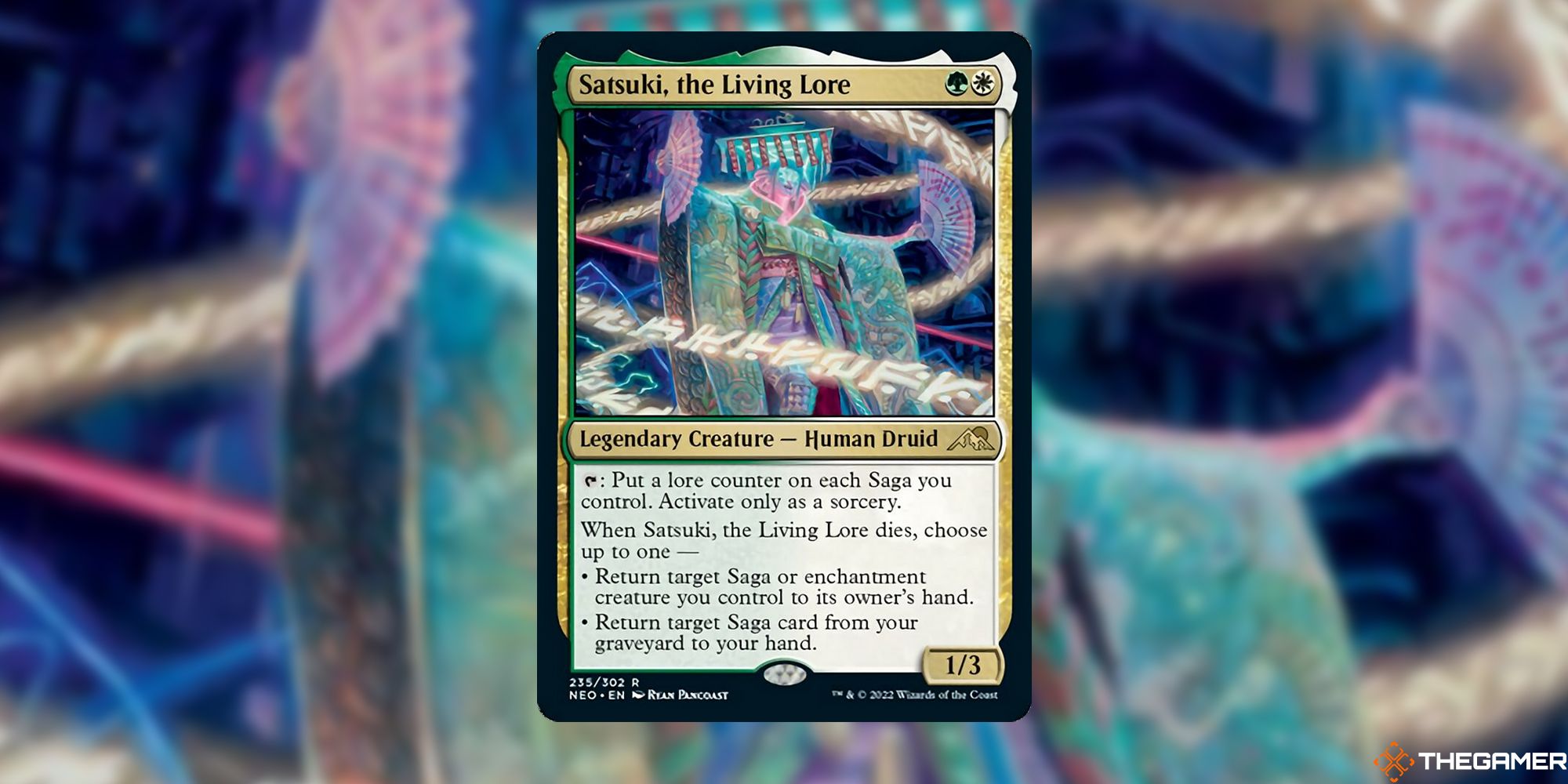 Satsuki, The Living Lore is the first Commander to specifically care about the massively popular Saga enchantments, which were introduced in 2018's Dominaria. Costing just one green and one white, Satsuki is a 1/3 Human Druid. You can put a Lore counter on each Saga you control by tapping her. She also allows you to return a Saga or enchantment from the battlefield to your hand, or a Saga from the graveyard to your hand, whenever she dies.

Compared to some of the Sagas in other colours, green and white's can be pretty tame. With that in mind, the goal for this deck is to instead turn all those Sagas into creature token-printing machines to keep an endless army of creature tokens always on the move. 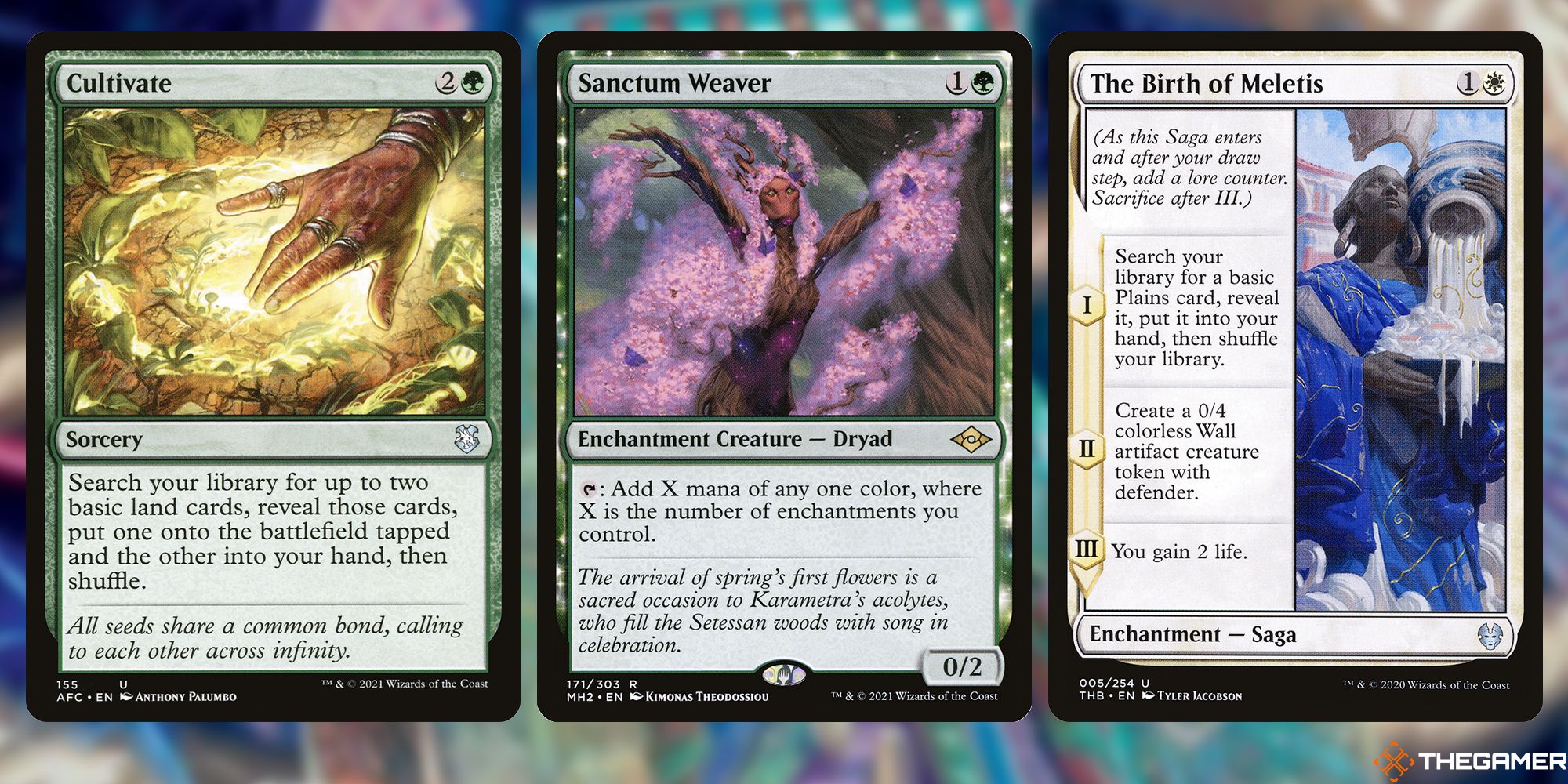 We're in green, and our deck has a very low average mana value, so we don't have to try too hard with ramping. The classics like Cultivate, Kodama's Reach and Rampant Growth do a lot of the heavy lifting.

That being said, we do have a few special tricks to work with as well. A lot of our Sagas are great ramp tools, especially seeing as Satsuki can help repeat Saga effects through her death trigger. Azusa's Many Journeys, Boseiju Reaches Skyward, Jugan Defends the Temple, The Birth of Meletis and The Restoration of Eiganjo all either directly help with ramp, or at least put lands into our hand to ensure we have one to play every turn.

Sanctum Weaver is a great card here. It can tap to produce mana of any colour equal to the number of enchantments you control – hopefully we'll be having lots of Sagas out at the same time, so it's a great tool to have.

Though it isn't strictly ramp, it is worth pointing out that this deck is using Snow Basics over the normal ones. There is only one reason for this: Search for Glory. It isn't exactly a game-winning card, but with how few downsides there are to using snow lands, we can justify the swap for just a single card. 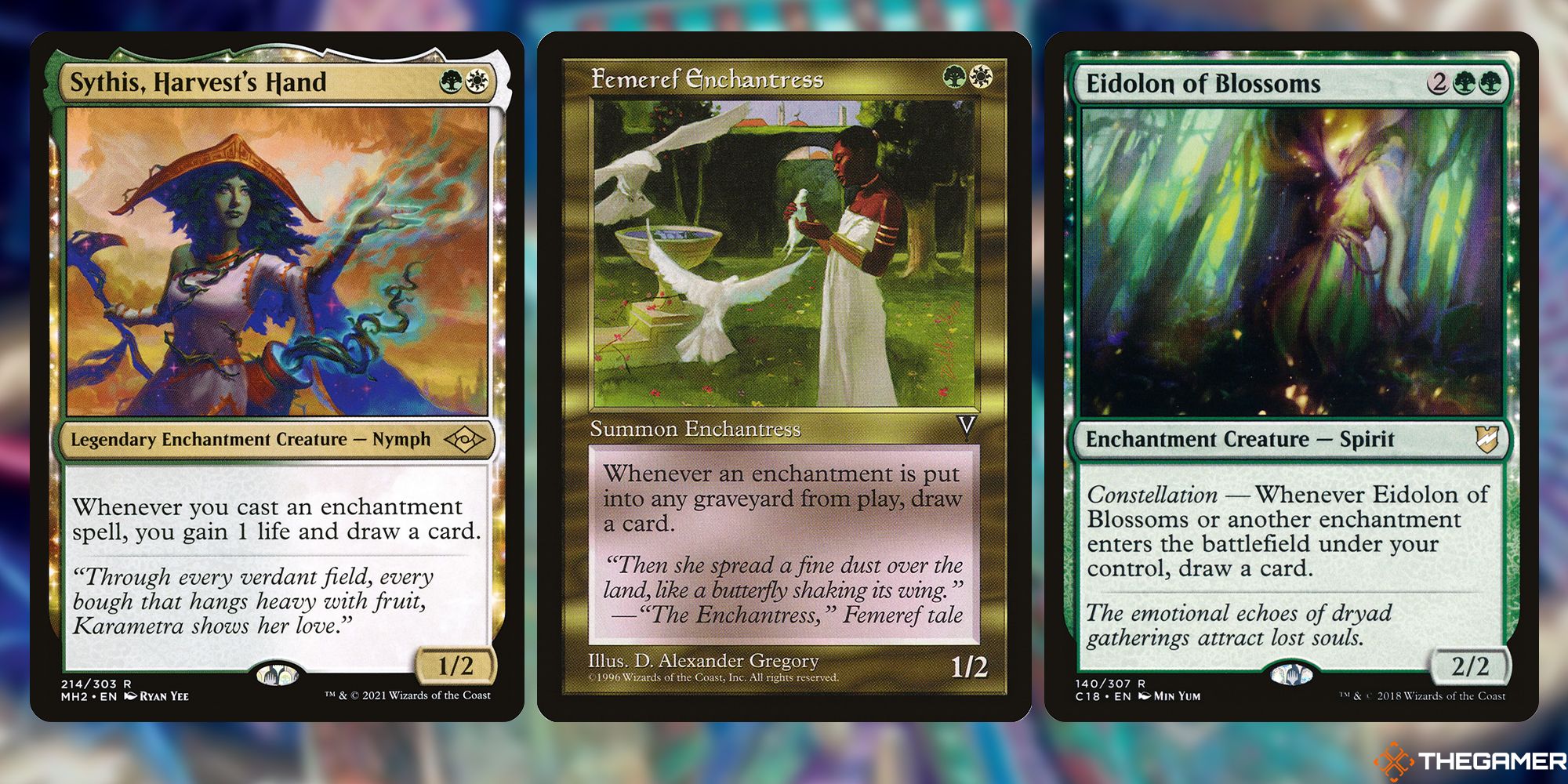 This deck is effectively an Enchantress deck with extra steps, so we can use some of the draw tools that work so well in more traditional Enchantress Commanders.

For draws that trigger on the cast of an enchantment, we've got Sythis, Harvest's Hand; and Enchantress's Presence. We've also got a few cards that trigger whenever an enchantment is put onto the battlefield, with Eidolon of Blossoms, and Setessan Champion. The best thing about these is that most of them are enchantments themselves, which, with Satsuki, makes getting rid of them very difficult for your opponent.

A particularly powerful draw tool in this deck is Femeref Enchantress. It draws you a card whenever an enchantment you control is destroyed or sacrificed; we've got plenty of self-sacrificing Sagas here that will constantly be bipping in and out of the graveyard. 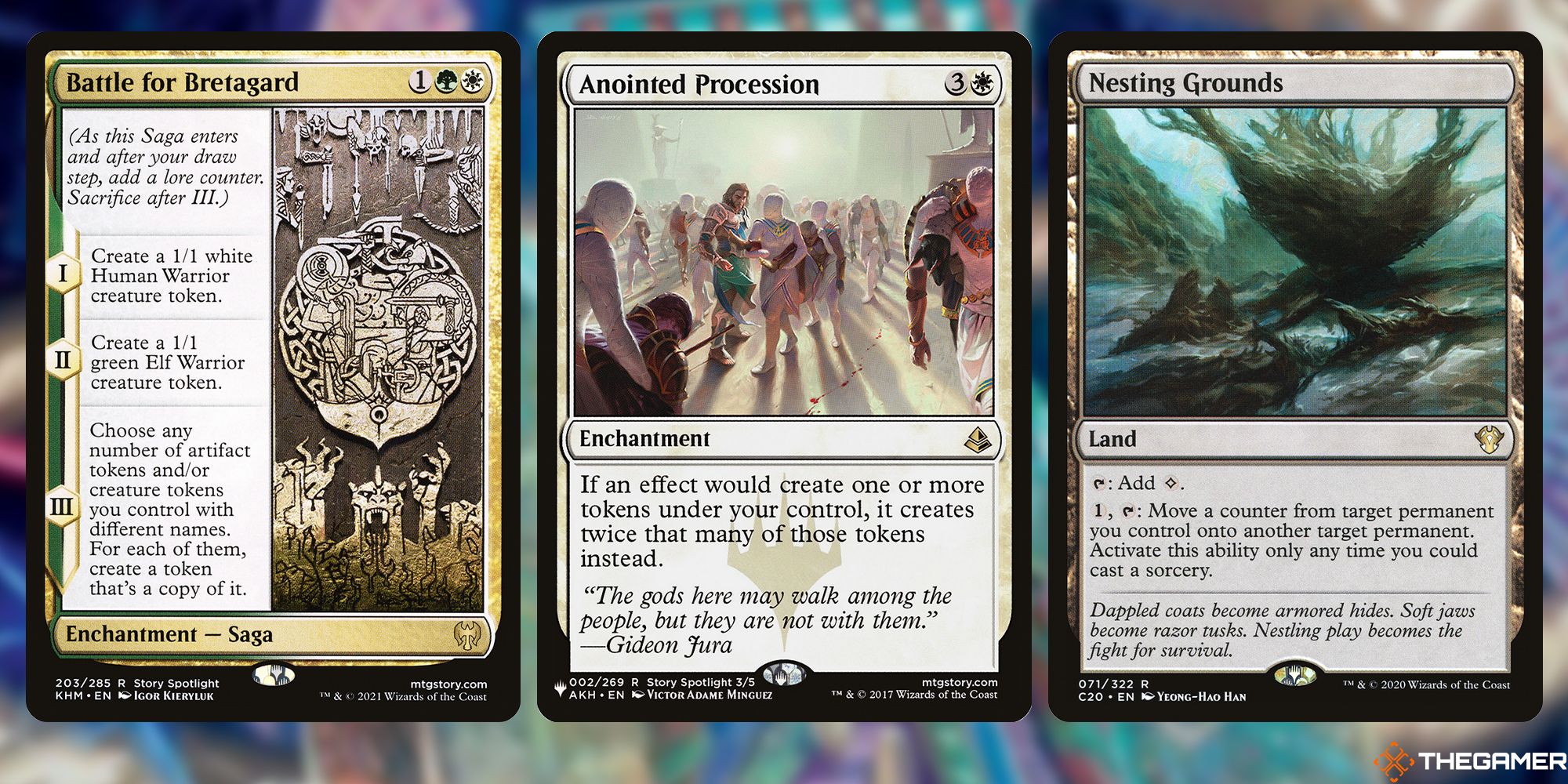 Though it's tempting to just throw in every white or green Saga and hope for the best, this deck wants to use Sagas to continually produce creature tokens we can win with. For that, we need to be a bit more discerning with our choices.

Battle for Bretagard creates a human token on its first turn, then creates an elf on the second. On the third chapter, it makes a copy of every token with a unique name (so you'd get another Human Warrior and another Elf Warrior, for example). We're also using History of Benalia to make two 2/2 White Knights with vigilance, Jugan Defends the Temple to make a 1/1 Human Monk, The Birth of Meletis to make a 0/4 Wall with defender, and The First Iroan Games to make a 1/1 Human Soldier.

NOTE: One Saga we're not running is Fall of Thran. Mass Land Destruction is heavily frowned upon in Commander, especially with a Commander that makes it easily repeatable like Satsuki. While you could in theory lock down the entire game, you probably shouldn't. If you do decide to run it, check with your playgroup first.

None of that sounds especially impressive, especially seeing as Sagas sacrifice themselves whenever they complete their chapters. So, what if they just… didn't? By removing Lore counters, we can keep Sagas re-triggering every turn and never sacrificing, in theory keeping our creature tokens coming in thick and fast. Removing counters isn't a very common ability, but we've still got Ferropede, Power Conduit, Medicine Runner, and Nesting Grounds to keep things going.

There are also plenty of other ways to buff our token output. The most well-known ones are Anointed Procession, Parallel Lives and Doubling Season, which each double the number of tokens we make – with all three out, one 2/2 Knight becomes eight. We've also got classics like Intangible Virtue, Divine Visitation to turn our tokens into 4/4 Angels instead, Cathar's Crusade, and Second Harvest for a quick, one-off token doubler. 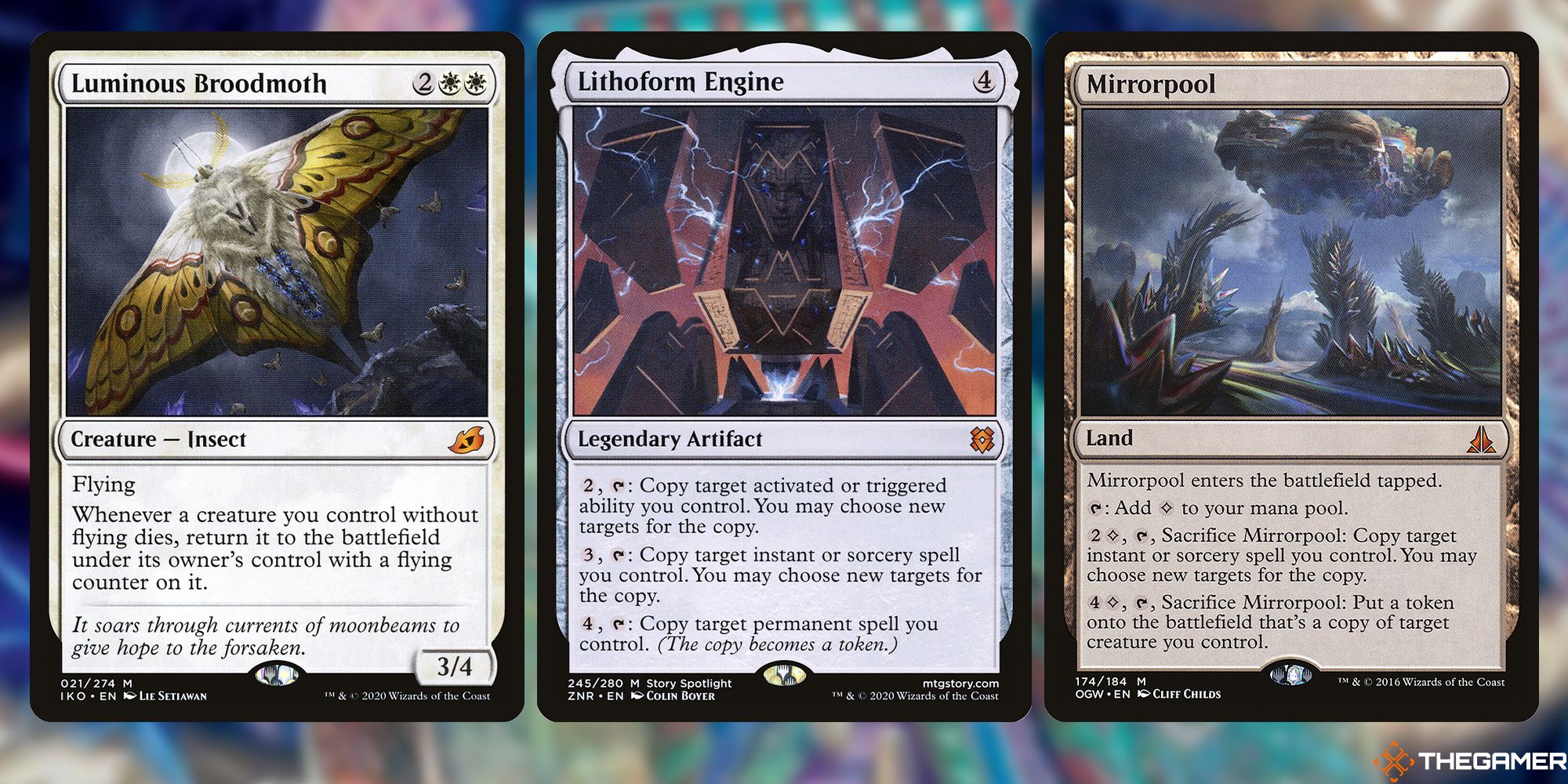 The problem with removing counters to power the token production is it's pretty slow: each of our tools only removes one counter each turn, so we might not be able to keep the effects we want going for too long. For that, we've got ways to abuse Satsuki's death triggers to keep pulling as much as we can out of the graveyard.

The easiest way of doing this is to make token copies of Satsuki and use the legend rule to sacrifice one. Using cards like Mirrorpool, Minion Reflector, and Bramble Sovereign, these still require you to kill off and re-cast Satsuki every once in a while, but it gives us a few instances of graveyard recursion that can win the game.

Luminous Broodmoth is also great for this, as it can bring Satsuki back without having to pay her mana cost. Just make sure you remove the flying counter Broodmoth gives Satsuki before she dies again to keep the death triggers rolling.

NOTE: Keep in mind the Legend rule is a state-based action, meaning it ignores the stack and will happen before anything else. You won't have time to remove the flying counter your Luminous Broodmoth gave to Satsuki before sacrificing it, so always remove the token copy first to buy yourself some time.

If all else fails, there's always Lithoform Engine, an artifact that can copy the triggered ability of Satsuki. If she's going to die anyway, you may as well pull back two enchantments rather than one. 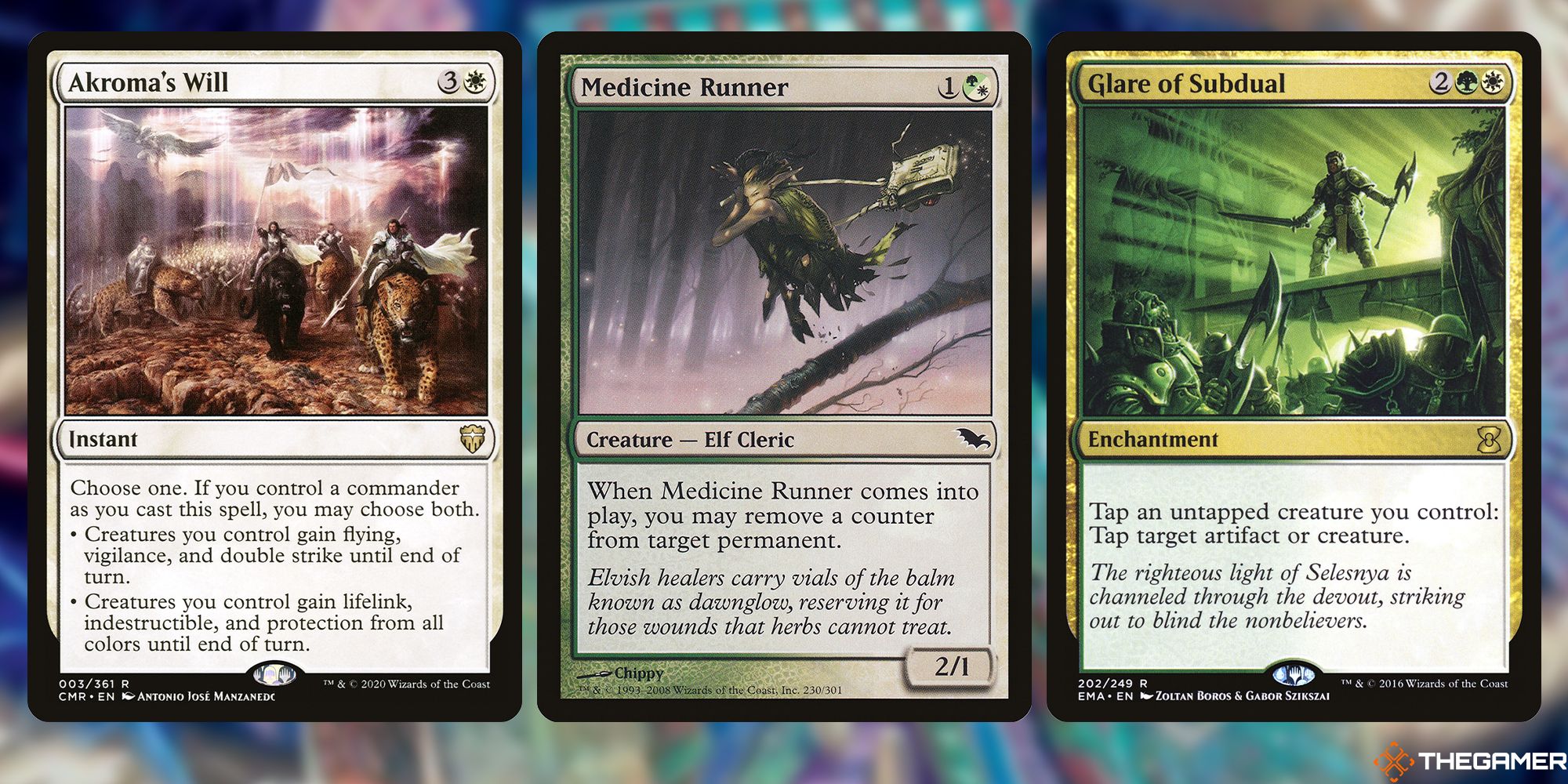 We're playing 'Tokens Disguised As Enchantress', so you win in one way: marching in with all your creatures and smashing your opponents in their faces.

The easy way is with an Akroma's Will to give all your creatures flying, lifelink, double-strike, vigilance, indestructible, and protection from all colours until the end of the turn. Cast that with Satsuki's out, and there's very little your opponents can do to stop you.

But if, somehow, they manage to survive an onslaught of massive double-striking Angels, there is another way to clear the path: Glare of Subdual. With Glare of Subdual, you can tap your own creatures to tap down artifacts and creatures your opponents control. Remove all their blockers this way and, with any luck, you'll still have more than enough tokens to swoop in and get the win without too much hassle.

There is one infinite combo worth keeping an eye out for, although it is peak jank: Luminous Broodmoth, Ashnod's Altar, Minion Reflector and Medicine Runner.

Power Down The Deck 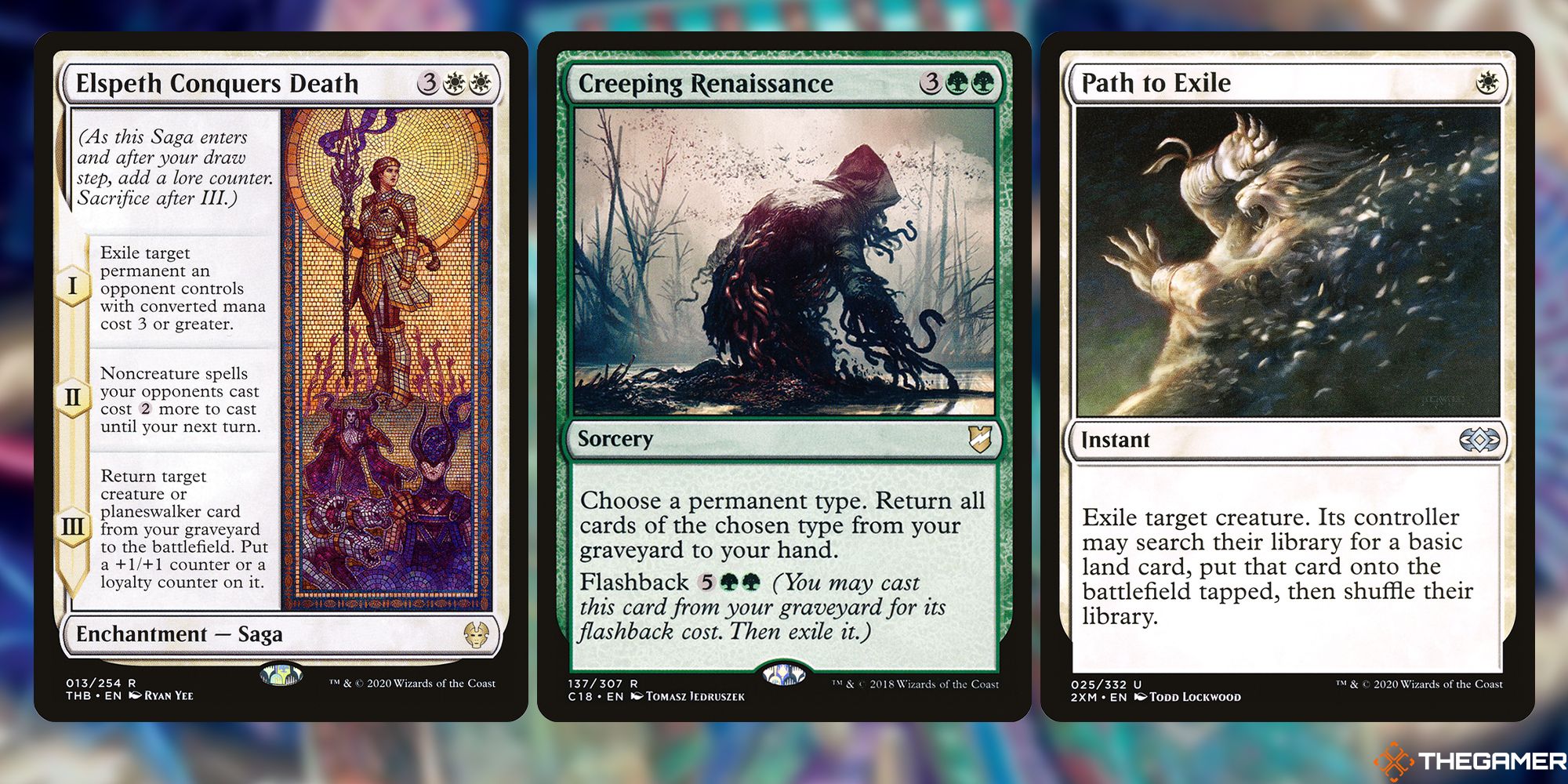 Usually this is the bit where it's recommended you take out the infinite combo, but there's really no point in doing so here: it takes four cards to pull off, and none of them are your Commander. It might be something you tell your playgroup about beforehand, but it falls so firmly into the famed "Magical Christmas Land" that you don't need to worry too much about it.

Powering this deck down is going to be difficult. The best way you can do it are taking out a few of the best-in-slot cards like Swords to Plowshares, Path to Exile, Heroic Intervention, and Elspeth Conquer's death and relying on lower-power alternatives like Generous Gift, Snakeskin Veil, and Blade Banish.

You may also want to slow down on the graveyard recursion, and just rely solely on Satsuki for it. By removing Sun Titan, Creeping Renaissance, Open the Vaults, and Resurgent Belief, you'll less consistently be able to replay your Sagas.

For the full decklist, either check the Moxfield page or expand the box below.

Arasta of the Endless Web

Azusa's Many Journeys / Likeness of the Seeker

Jugan Defends the Temple / Remnant of the Rising Star

Sigil of the Empty Throne

The Birth of Meletis

The Fall of Lord Konda / Fragment of Konda