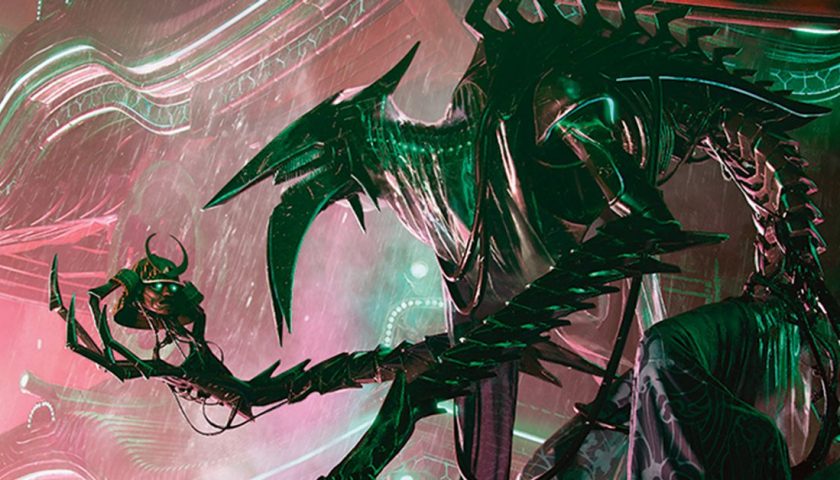 As complicated as Magic: The Gathering is — with all its various and ever-changing keywords, strategies, products, storylines, even entire gameplay formats — would you believe it also has its own secret language?

Phyrexian was first introduced in 2010. It’s a language spoken in-fiction by a loathsome species of cybernetic monsters on the plane of Phyrexia. Publisher Wizards of the Coast has never completely explained how it works. So, for more than a dozen years now, a dedicated group of amateurs has been working to translate it, going card by card with only a few lines of new text occasionally delivered with new sets of cards. What they’ve discovered is a tongue that’s simultaneously alien and also very much a part of our world.

Fernando Franco Félix, a science advisor for PBS’ Space Time, is perhaps the foremost expert in Phyrexian outside of Wizards. A polyglot — that is, a master of multiple languages, in this case including English, Spanish, and Esperanto — he’s been fascinated with Phyrexian for years now, and maintains a small but dedicated following on YouTube.

“I’ve always liked languages,” Félix told Polygon from his home in Aguascalientes, Mexico. “What I always say is that a language is like an art gallery, and every aspect of the language is like an art piece. I see languages as the greatest collaborative work of art in the history of humanity. You have millions of people and, without even realizing it, they are creating this system, which is beautiful.”

Phyrexian is written natively in columns, and those columns are read top to bottom and left to right. For Magic cards, Wizards of the Coast prints those columns on their side and places them in reverse order — a format that looks like English, but which would seem bizarre to a native Phyrexian speaker. Even when a card is tapped (turned on its side) Félix ends up having to read it backwards — right to left.
Image: Wizards of the Coast

Of course, Phyrexian wasn’t created over thousands of years across multiple cultures. It’s a constructed language, also called a conlang. That makes it similar to the languages found in Tolkien’s The Lord of the Rings books, or modern conlangs like Star Trek’s Klingon and Game of Thrones’ Dothraki and Valyrian. Of course, you can easily find documents online that will teach you how to speak like an elf or a Klingon. But not so with Phyrexian.

“They explained that it was a real language [and] that they hired linguists to create this language,” Félix said, “but they have never explained how it works. And so I saw that as a challenge.”

As it turns out, Félix was more than up to the challenge. He and his community of collaborators have created a Phyrexian dictionary. In January he used it to become the first person to translate a Magic card written in Phyrexian before the English-language version of the card was released to the public.

But how? Félix says it’s largely a guessing game.

“You try to make good guesses,” Félix said. “You try to see if your guesses hold up. If they can’t hold up, you try to come up with something else. If they do hold up, you probably got it right and you can continue moving on.”

Félix explained that while Phyrexian is a unique construction, it derives many of its quirks from existing languages. For example, it uses a consonantal root system, just like Hebrew and Arabic, to create an assortment of easily recognized word stems. But Félix thinks its system for conjugating verbs is clearly derived from German. Its alphabet shares similar features with Hangul, the alphabet used in Korea. The script used to write Phyrexian shares similar features with Hindi and Sanskrit. Phyrexian also uses a rigid set of punctuation marks, including notations for marking tense, quotations, and the beginning and the end of a sentence. There is even a way of marking the place where a reader should pause to take a breath, a kind of caesura embedded into the grammar of Phyrexian itself.

But over the last 12 years, fans have only been able to observe Phyrexian in a very narrow context, namely the rules written on collectible trading cards. Sometimes there’s a bit of flavor text at the bottom of those cards, a quote or a pithy epithet presented with limited context. Félix and his community are hungry for more. These texts are fragments of Phyrexian literature.

“My dream is that one day [Wizards publishes] a very short story, less than 1,000 words, but it’s all written in Phyrexian,” Félix said. “Then they just let us go to town with it. I’m pretty sure we could decipher it.”

What about actually speaking Phyrexian? That may take quite a bit longer to tease out in full. Phyrexians are part machine, after all, and their language includes elements where native speakers are obliged to slap their specialized metallic mouth parts together for emphasis.

“We have very few examples of spoken Phyrexian,” Félix said, “and the ones we have are very distorted because they are supposed to be spoken by these monsters, and they’re very hard to understand.”