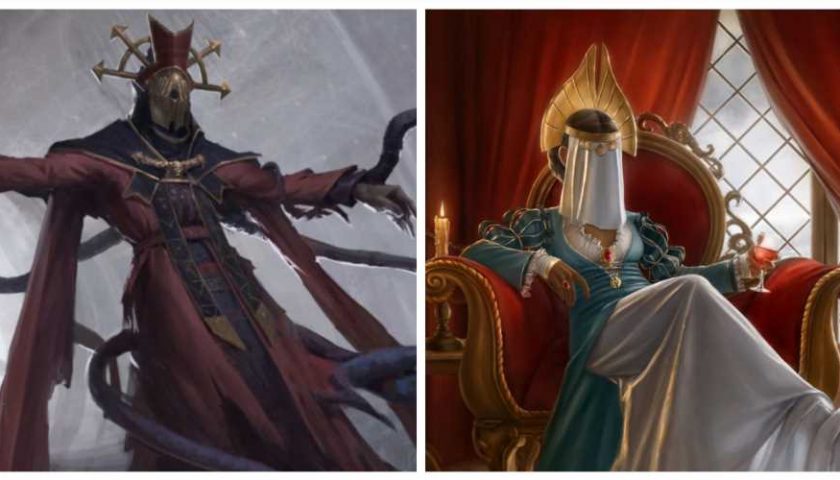 In addition to adding a litany of brand new viable commanders to the Commander format, Magic: The Gathering's newest set, Commander Legends: Battle For Baldur's Gate has brought a new innovation to the format: Backgrounds. In the original Commander Legends, players could flexibly create decks of various color identities through the use of commanders with the Partner ability.

In a similar vein, Backgrounds are legendary enchantments that can be paired in the Command Zone with a Commander with the ability, "Choose a Background." This can allow these commanders to potentially be used to create decks of various color identities and strategies based on a player's choice of Background. As the Backgrounds in Battle for Baldur's Gate offer a wide range of abilities and vary greatly in power, we're going to examine which cards of this new subtype are the strongest. 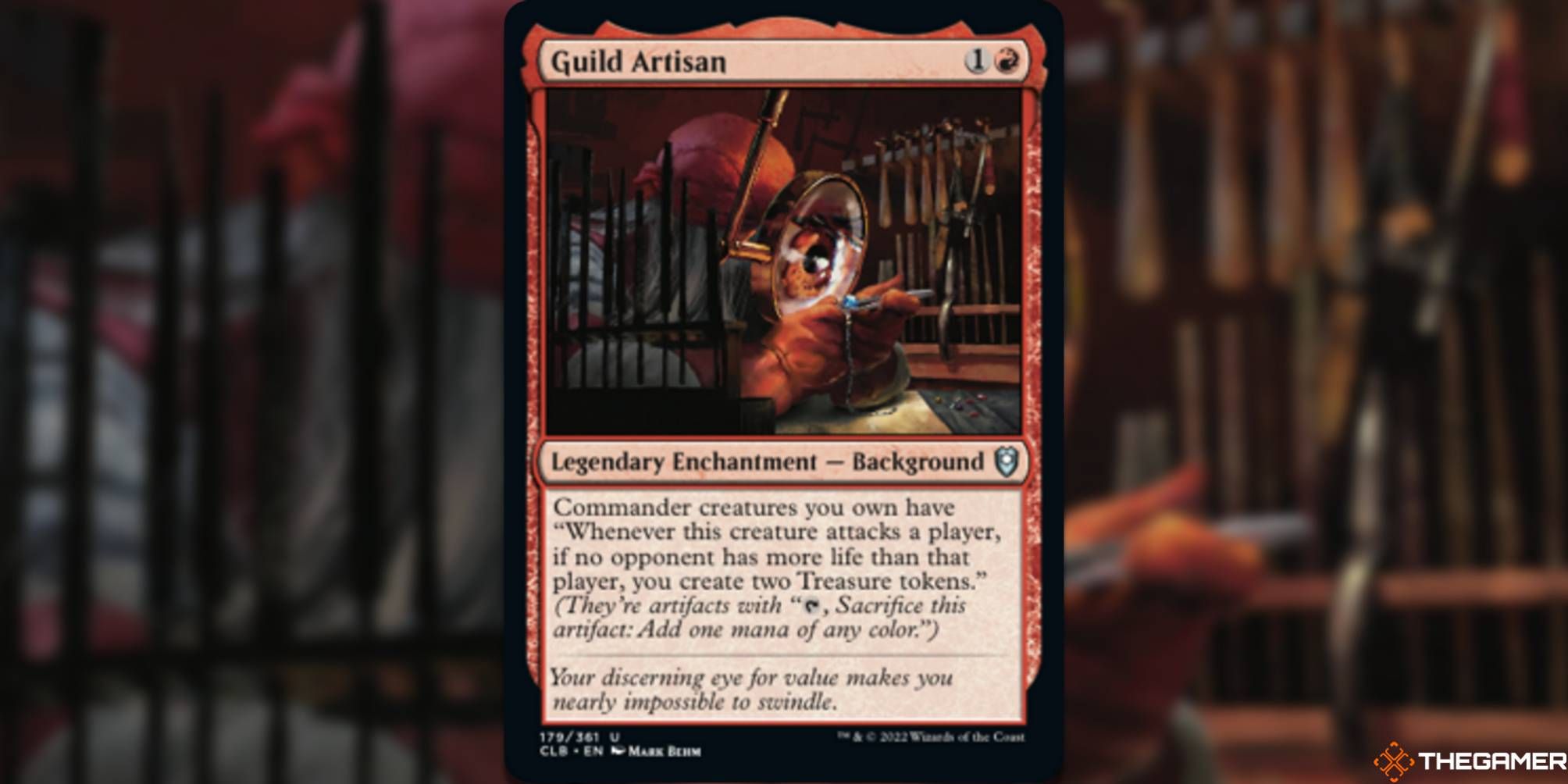 Guild Artisan is an efficient red Background for the low cost of two mana, allowing a player to mana ramp by attacking with their commander. As long as this enchantment is in play, when its controller's commander attacks the opponent with the most life among a player's opponents, its controller creates two Treasure tokens. When paired with a combat-oriented commander, Guild Artisan is a cheap and effective way to gain access to additional mana sources in the form of Treasures. 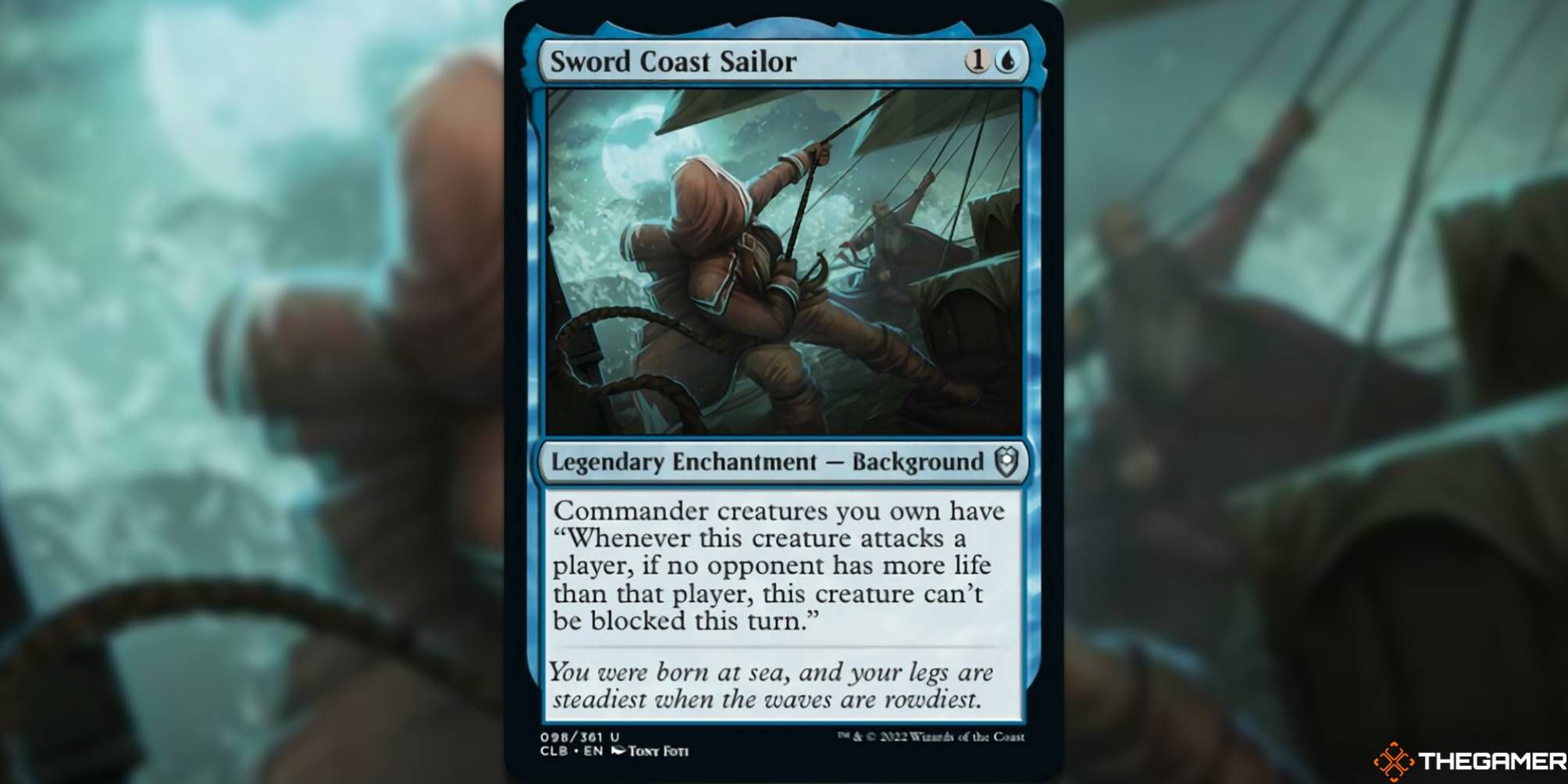 If a player is aiming to construct a deck such as a Voltron deck or even Infect deck that aims to win through dealing damage with a specific key creature, this low-mana Background can potentially be a great asset to one's deck. 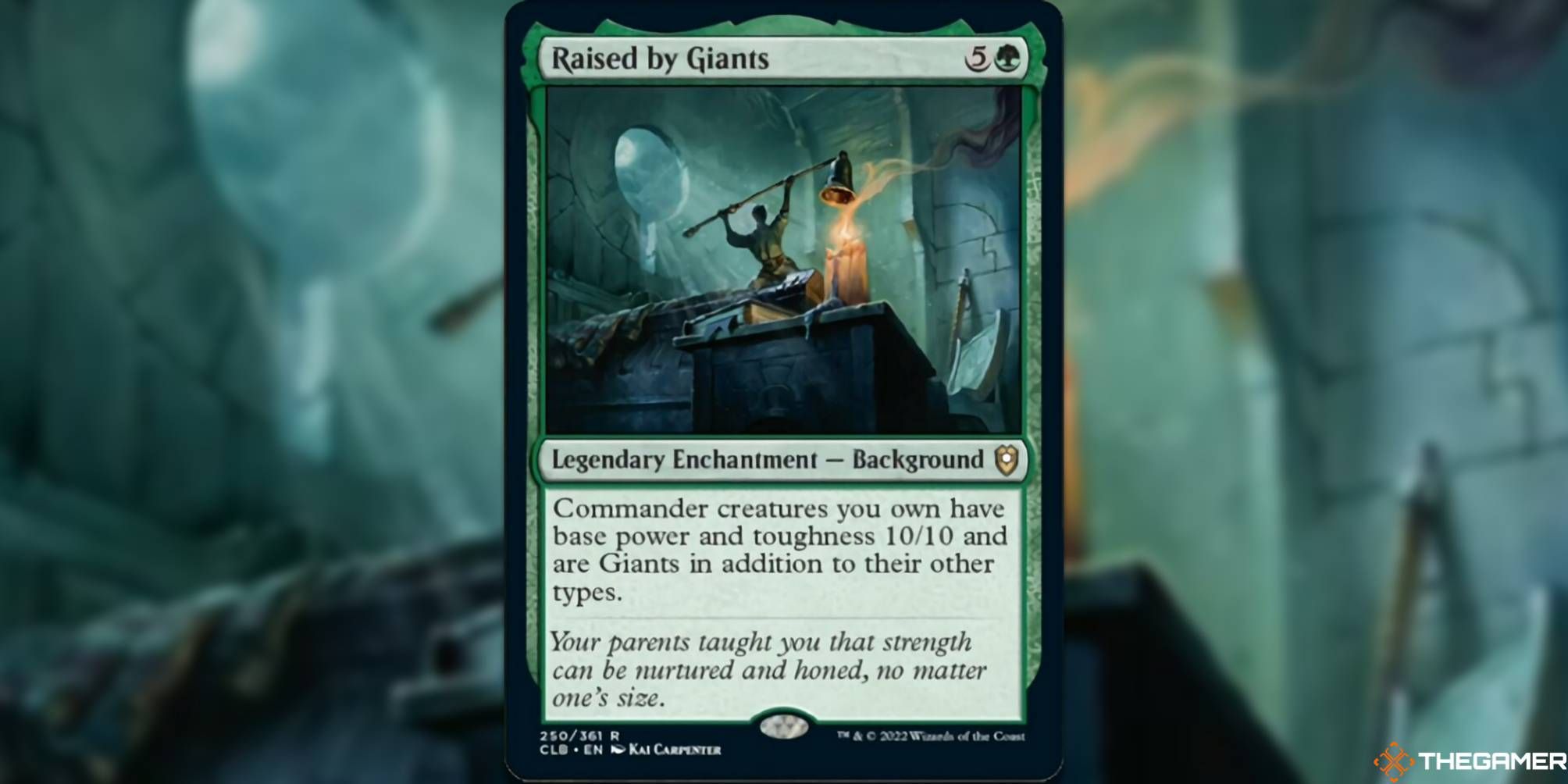 Though quite straightforward, Raised by Giants is a solid green background that can substantially increase the size of one's commander. As long as this enchantment is in play, its controller's commander has base power and toughness of 10/10 and is a Giant in addition to its other types. For combat-focused decks, this can be a solid means of ensuring that one's commander is a substantial threat. 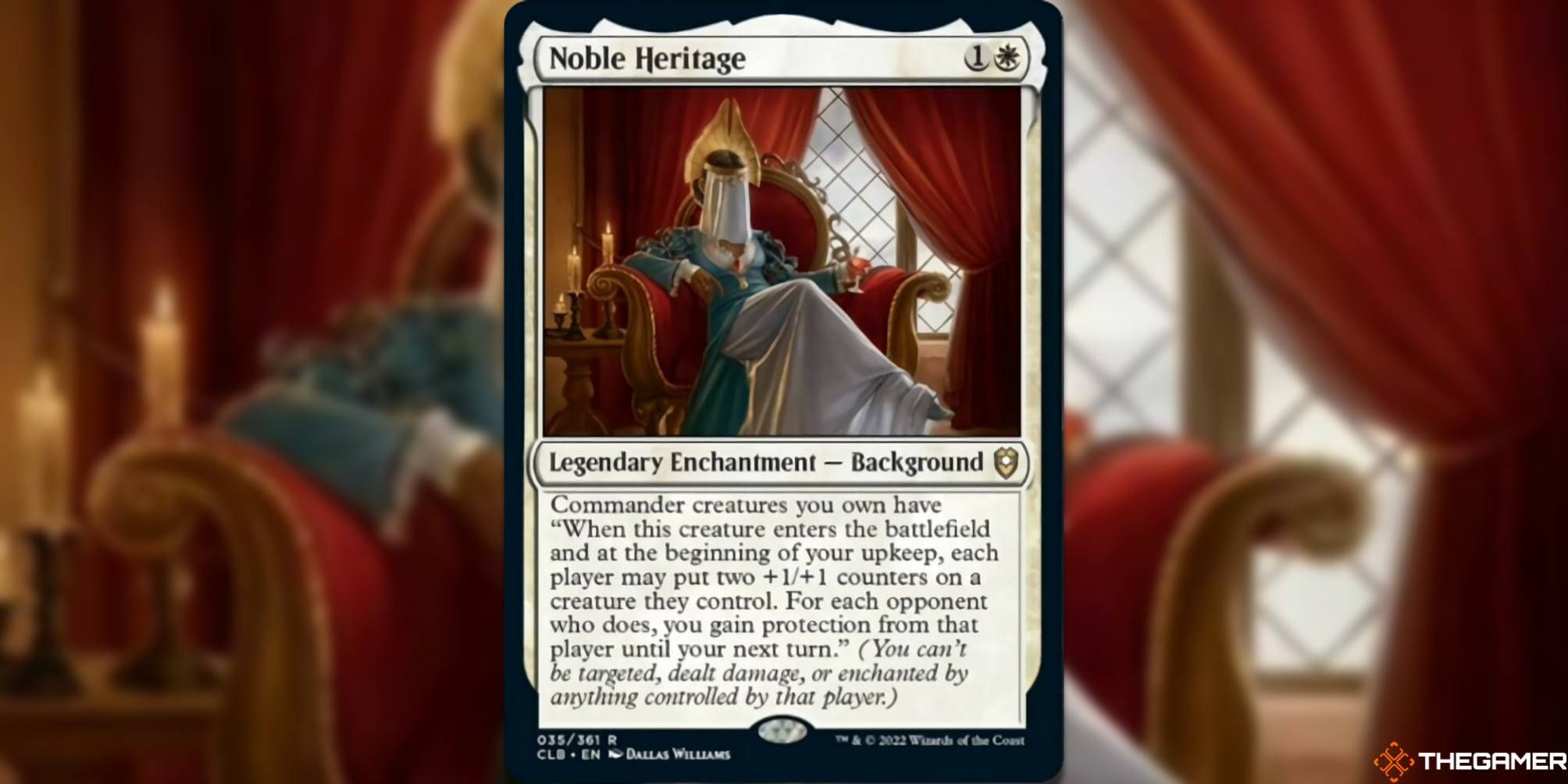 Noble Heritage is a great Background option that can reliably synergize with counter-based strategies whilst opening the door for political negotiations with one's opponents. A white Background for two mana, at the beginning of its controller's upkeep, each player (its controller included) may put two +1/+1 counters on a creature they control. Then, this enchantment's controller gains protection from each opponent who put counters on a creature this way until their next turn.

In addition to providing bargaining chips for political negotiations, Noble Heritage can reliably provide +1/+1 counters each turn, synergizing with a wide array of cards including Doubling Season, Gyre Sage, and the recently printed Lae'zel, Vlaakith's Champion. 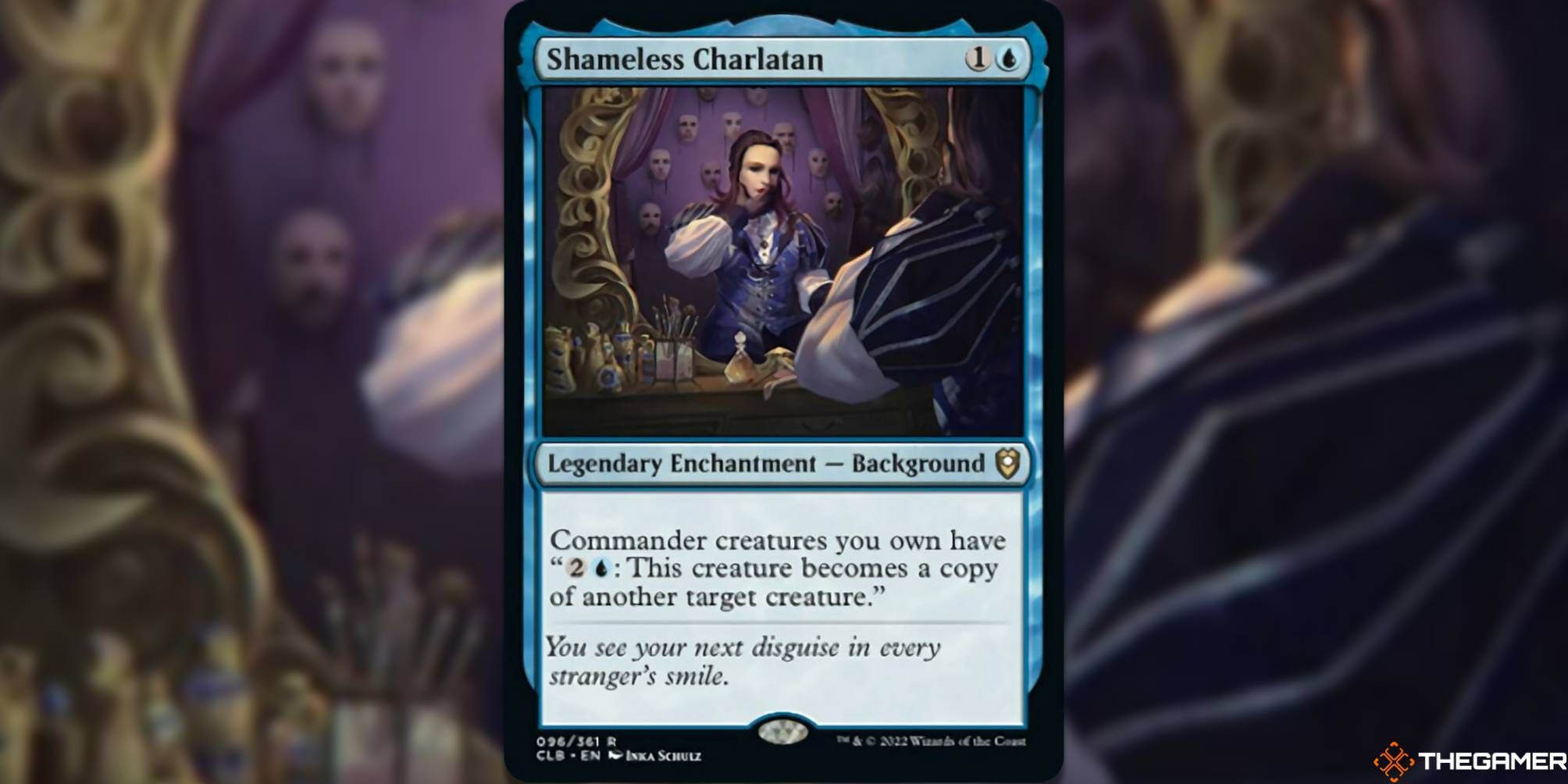 Shameless Charlatan is an incredibly unique and adaptable blue Background that can be used to gain the value of the most potent creatures in play. As long as this enchantment is in play, its controller may pay three mana at any time to cause their commander to become a copy of any other target creature. Activatable at instant speed, a player's commander can potentially gain notable combative abilities or protection found on other creatures, all at instant speed.

As this ability is attached to Shameless Charlatan, it can be used repeatedly over the course of a game in order to adapt to various situations and gain the value of progressively potent creatures. While this adaptability is quite powerful, it should be noted that as this copying effect lasts indefinitely, if a Shameless Charlatan player wishes to utilize their original commander, they will need to either flicker or re-cast it in some way.

1 Cultist of the Absolute 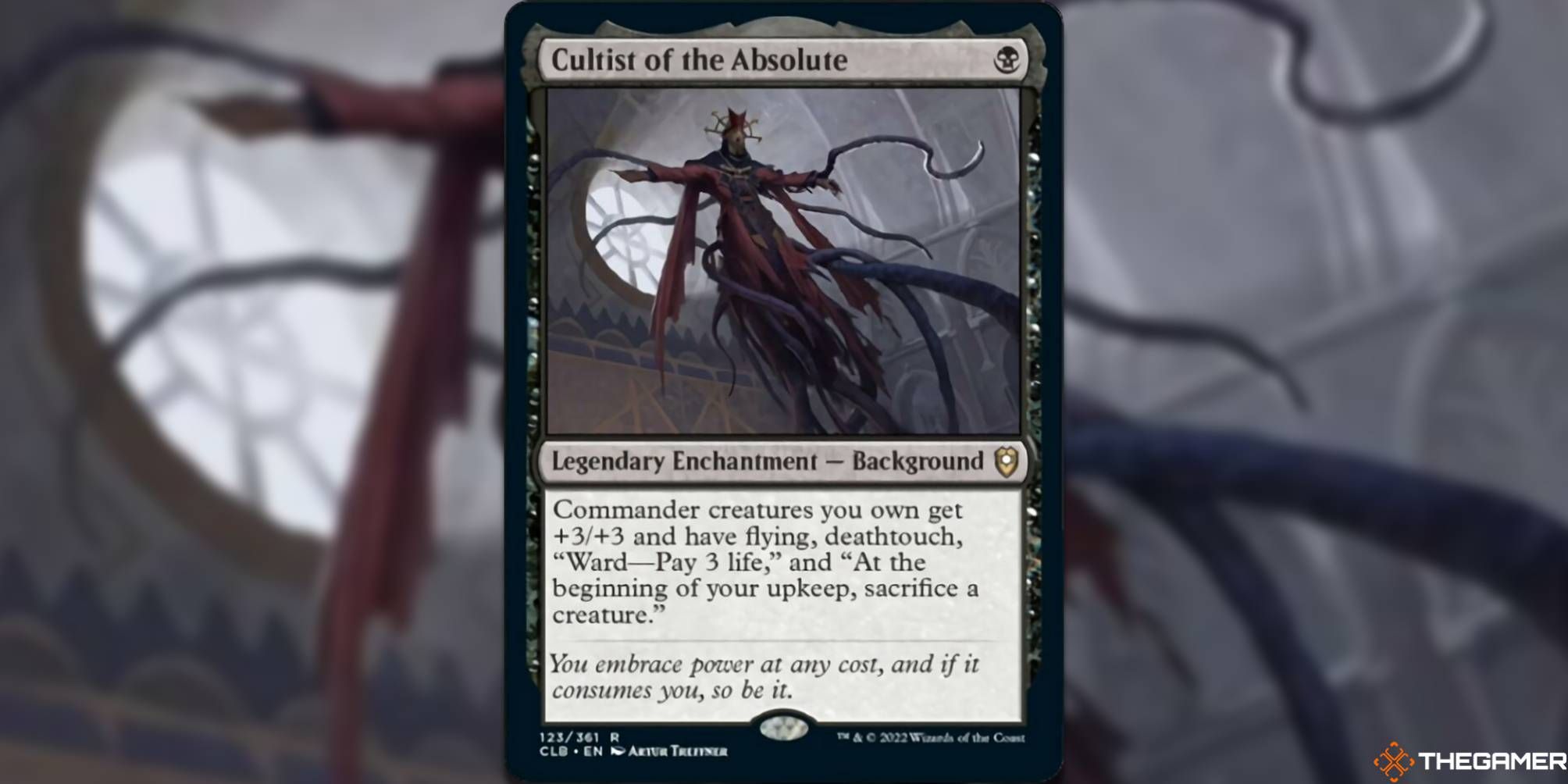 Cultist of the Absolute is a great Background that can provide impressive upsides to a deck for the cost of a single black mana. As long as this Background is in play, its controller's commander becomes quite potent, gaining +3/+3, flying, deathtouch, “Ward—Pay 3 life,” and a clause that states that its controller must sacrifice a creature at the beginning of their upkeep.

While the requirement to sacrifice a creature may seem like a downside, when paired with Aristocrats staples and easily recurrable creatures, Culstist of the Absolute can help improve the offensive capabilities of any Commander. A valuable addition to any combat focused deck.