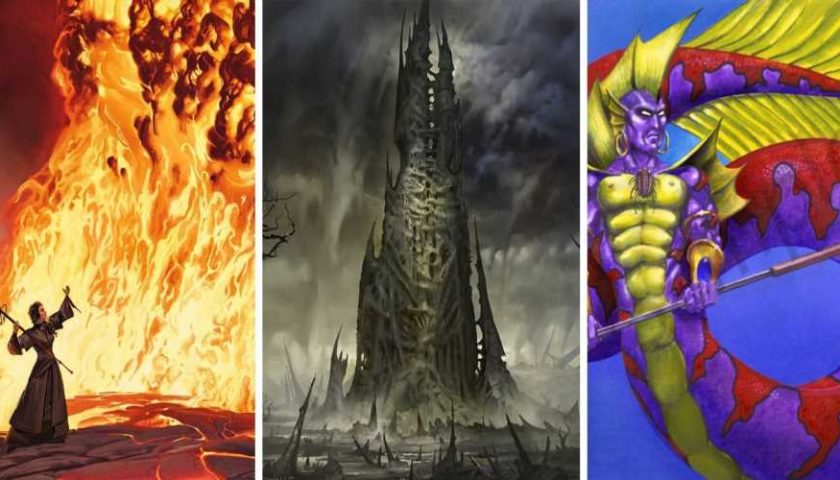 Dominaria Remastered is a true celebration of Magic: The Gathering's rich history. Encompassing 27 different sets, all linked by their shared setting of Dominaria, and 25 years of Magic design and development, it’s the perfect way to celebrate 30 years of the game, as the community has attested.

No product is truly perfect, however, and there are always reprints that fall through the cracks, particularly when a product draws from as many beloved sets as Dominaria Remastered does. While many of the big hitters were included in the set’s sparkling assortment of 271 cards, just as many were left out. We’ve gathered ten of the most glaring omissions here, for your consideration. 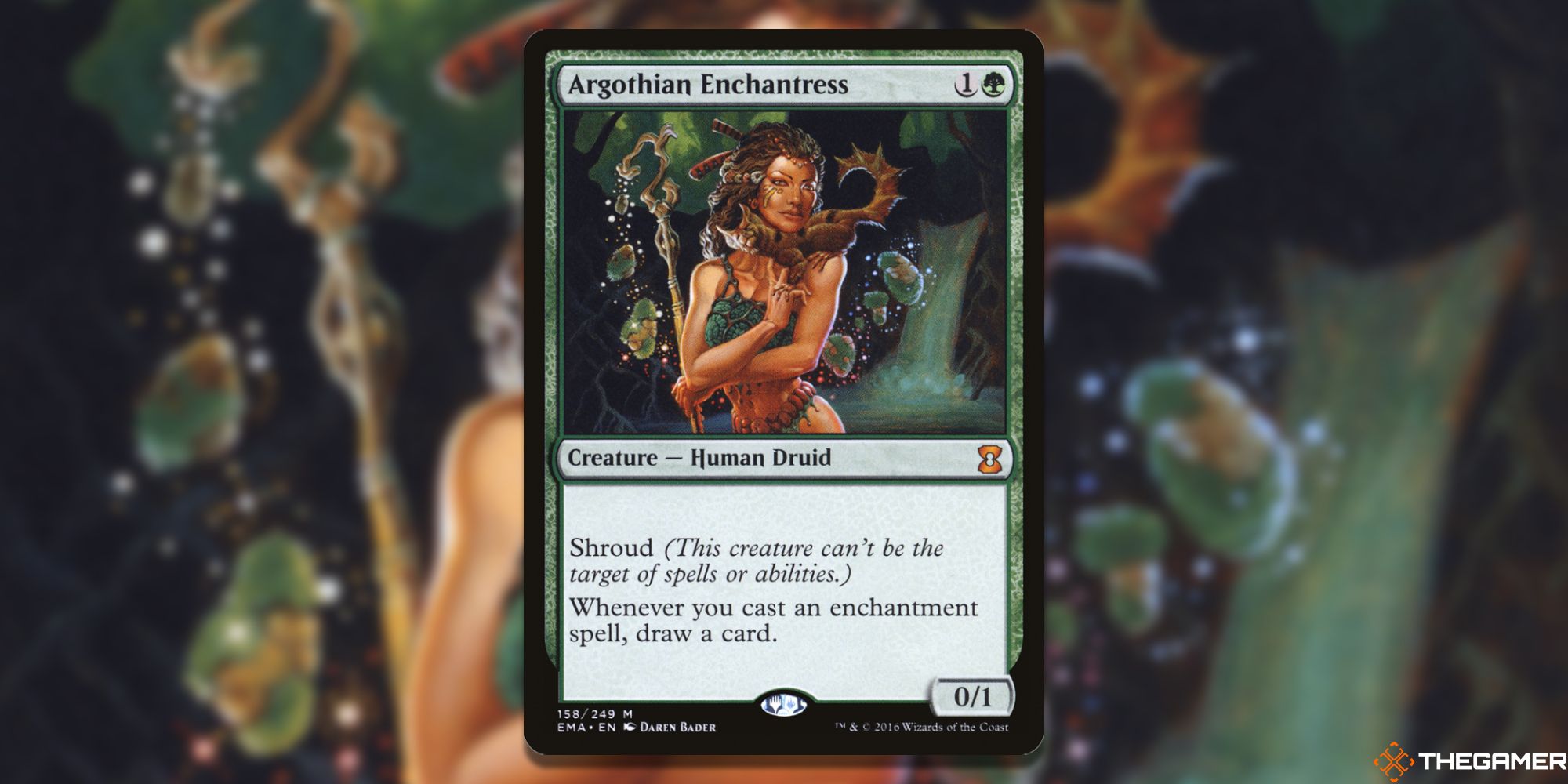 Hailing from Urza’s Saga, a set mainly known for its powerful artifact synergies, Argothian Enchantress bucks the trend by being one of the best enchantment support cards of all time. Letting the player draw a card whenever they cast an enchantment spell, this card is the reason the shorthand ‘Enchantress’, and the associated deck archetype, exists.

While many different versions of this effect have been printed over the years, Argothian Enchantress stands out due to its low mana cost and protective shroud ability, allowing it to stick around longer than its peers. It’s a powerful card in both Commander and Legacy, and with only one reprint since its original release, another would’ve been ideal. 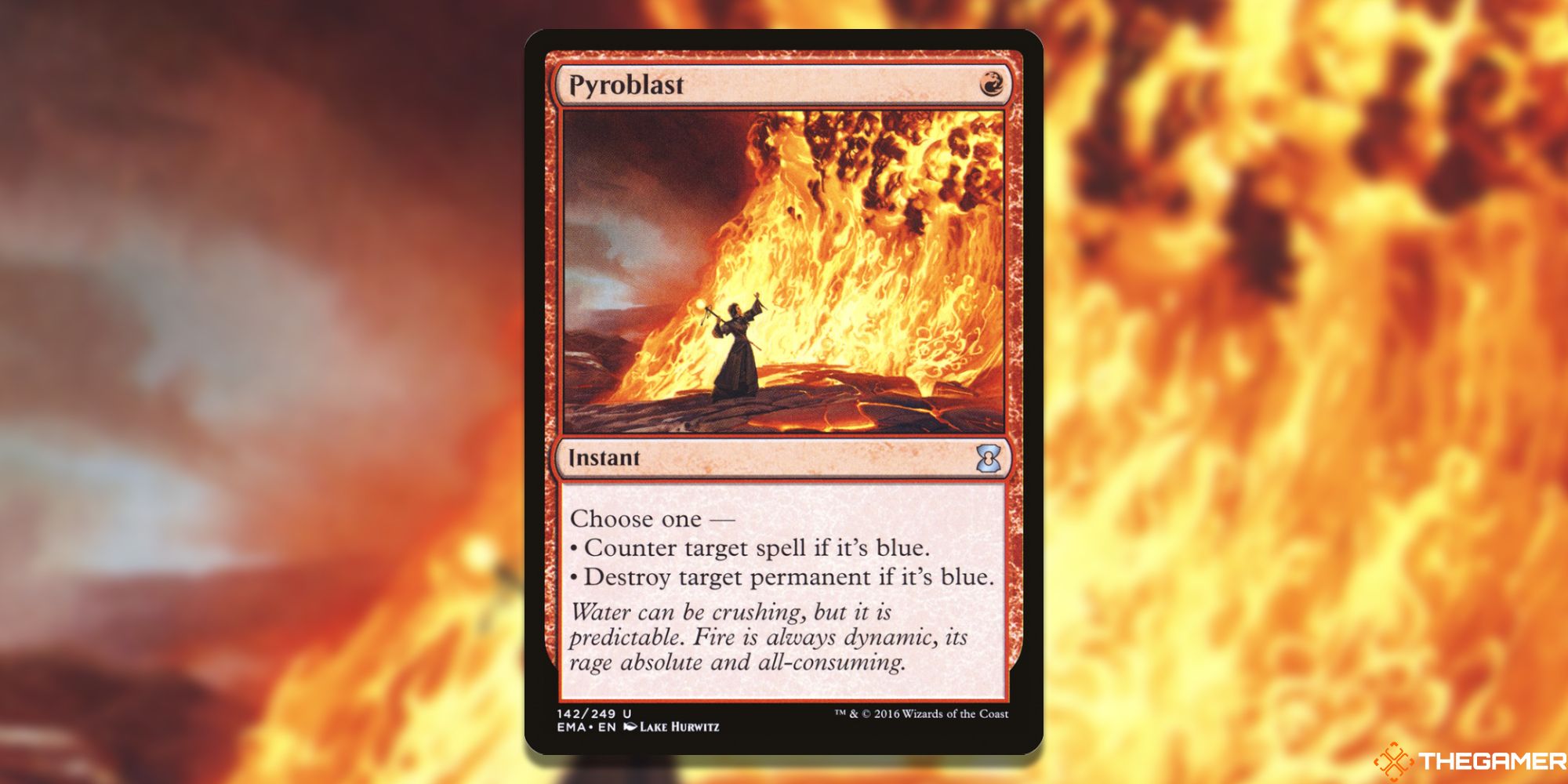 Not just a non-blue counterspell, Pyroblast is an anti-blue counterspell, able to deal with any blue problem before or after it’s cast. This, along with its bargain price of one red mana, makes it an incredibly attractive option in formats like Legacy and Vintage, where cheap blue cards are the most powerful and commonly-used options by far.

It’s also a great card in Pauper, where blue cards are similarly prevalent. This flexibility, and multi-format relevance, make Pyroblast a brilliant choice to reprint in a set like this, and a card that will find a place as long as blue cards are played. 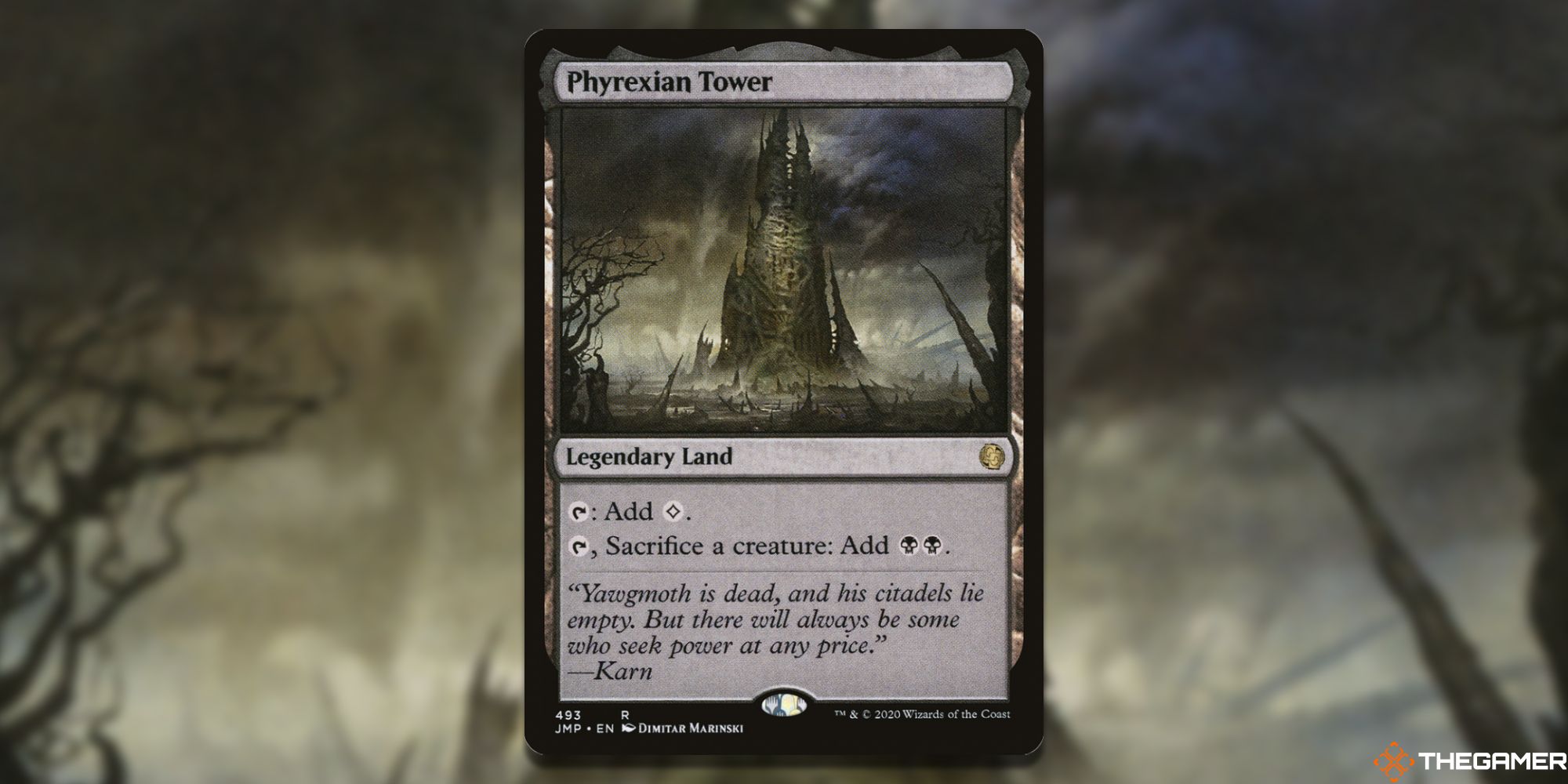 A very powerful land in Commander, particularly in sacrifice-based decks like Meren of Clan Nel Toth, Phyrexian Tower acts as both a mana accelerator and a free sacrifice outlet. It’s a staple in the 99 of black decks, and a multi-tool with no opportunity cost in deckbuilding. 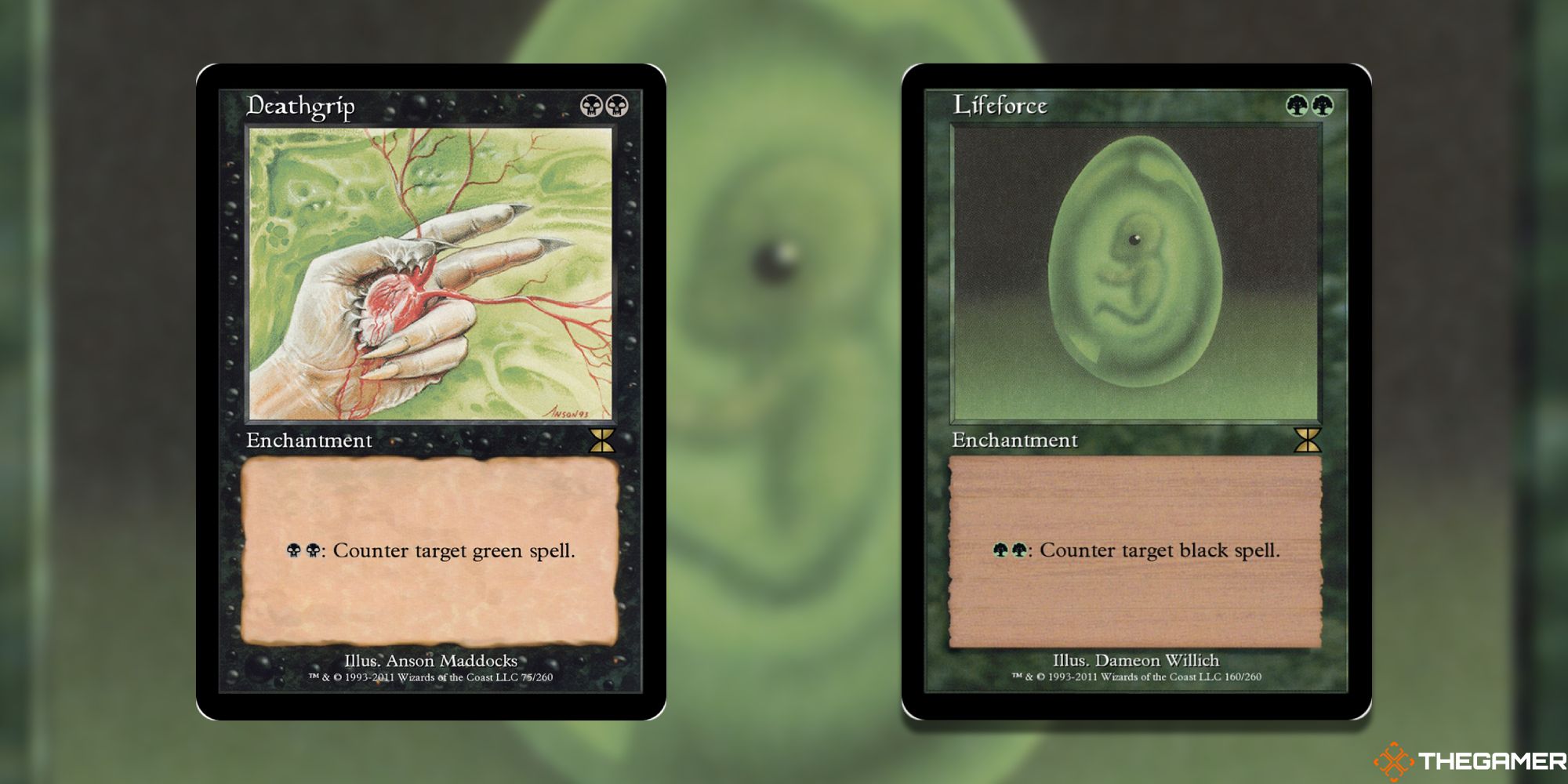 A forgotten duo of enchantments from the misty early days of Magic, Deathgrip, and Lifeforce represent the more experimental designs that existed before the introduction of the colour pie, and the accompanying strengths and weaknesses that each colour gained.

Not only are they both repeatable, non-blue counterspells, a rare thing indeed, but they’re also very cheap and flexible, only costing two mana each time to use. Even though they only counter one colour each, Deathgrip and Lifeforce are very good at what they do, and should be considered for your next black and/or green Commander deck. 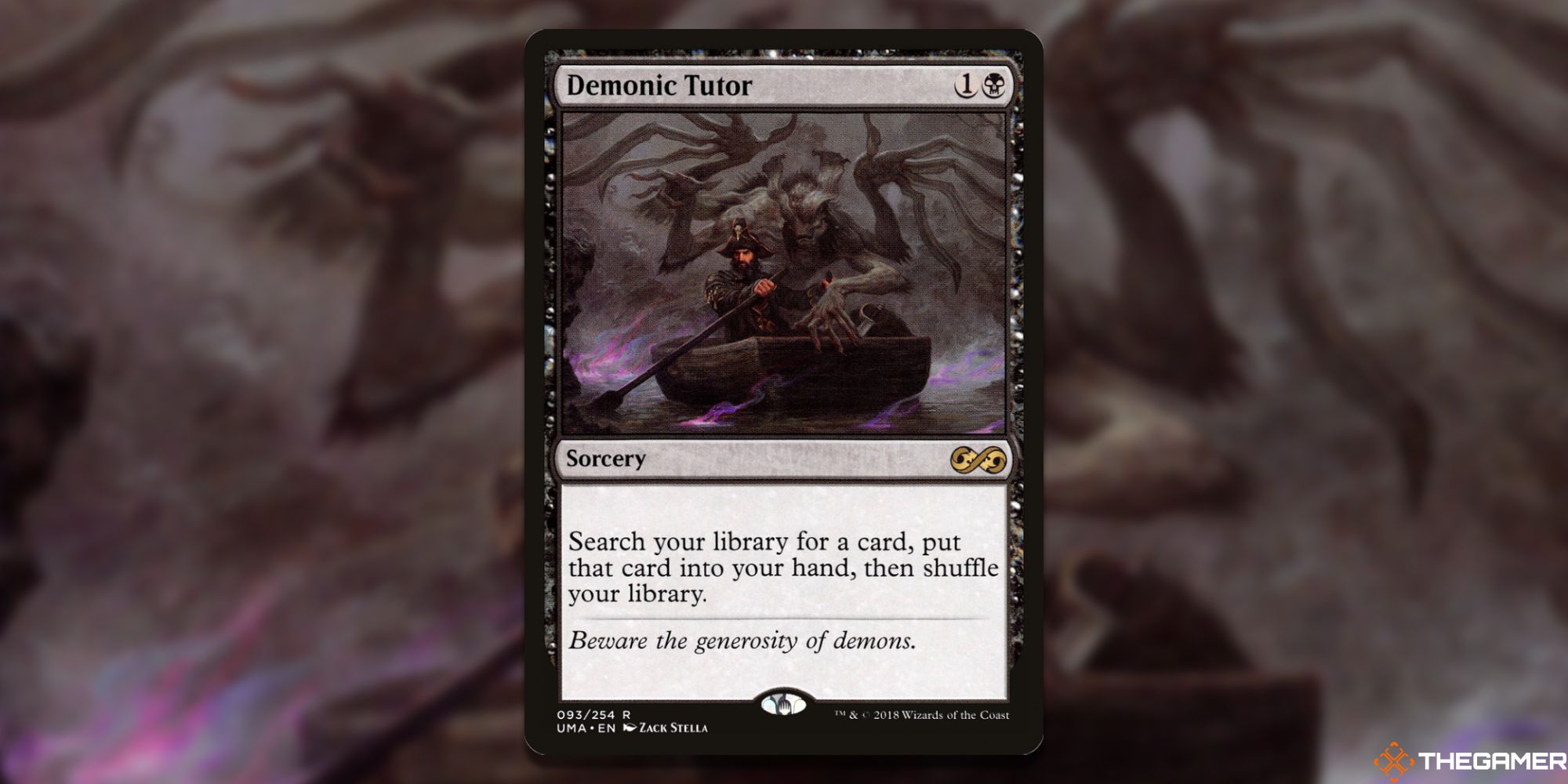 Any card that’s banned in Legacy and restricted in Vintage, while not being part of the reserved list, is worth considering for major reprint sets like this. Beyond its raw power level, however, Demonic Tutor is simply one of the game’s most iconic cards; ubiquitous in Commander, the card is the reason specific deck-searching effects are referred to as ‘Tutors’ to this day.

The reason it’s so iconic is because of its elegant simplicity; for two mana, you can grab any card from your deck, no questions asked. Ideal in Commander due to its singleton nature, and great in older formats for gathering combo pieces, it’s both a useful tool and a vital part of the game’s history. 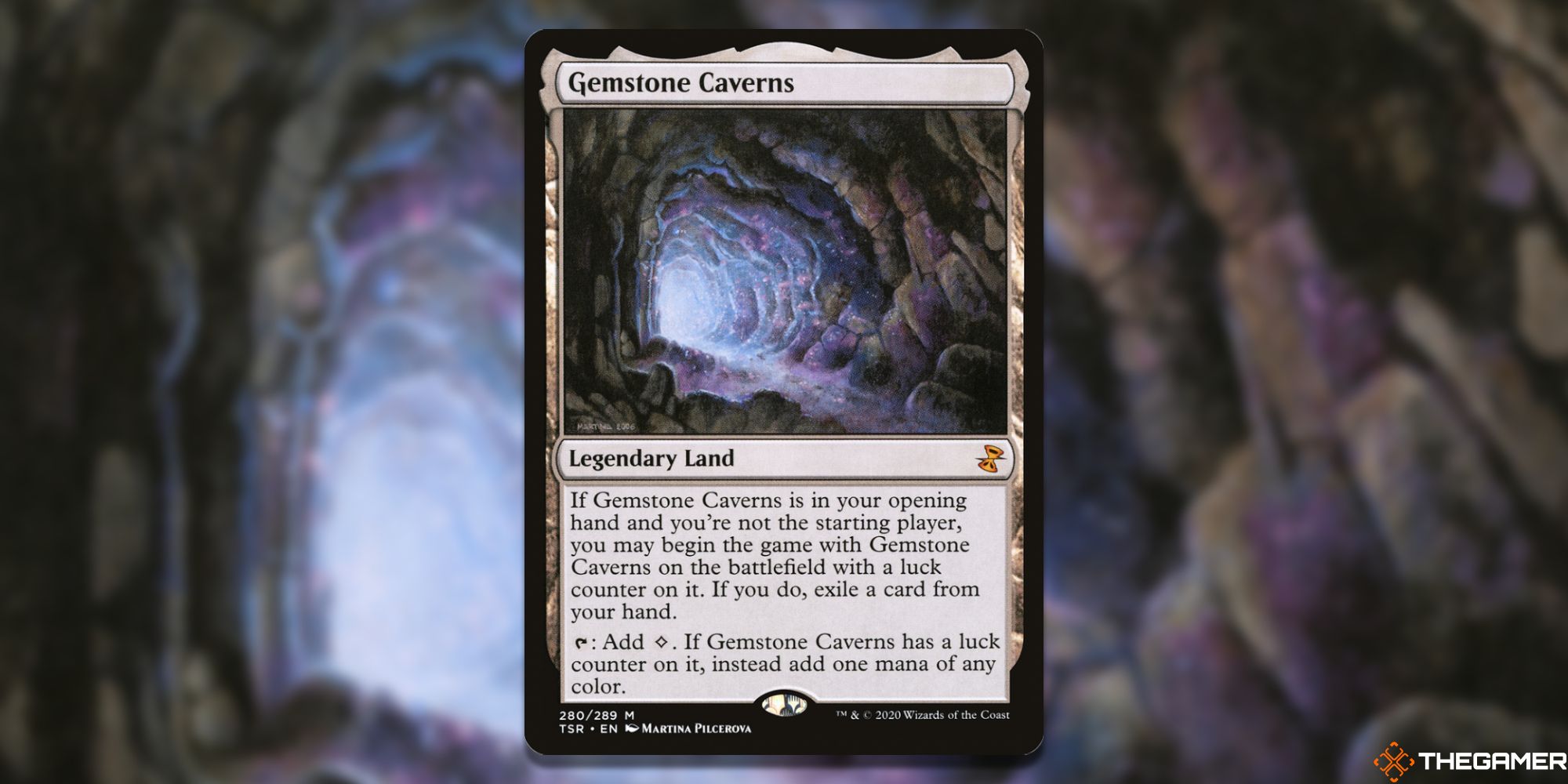 While unassuming at first glance, this nonbasic land breaks some of the fundamental rules of Magic as a game; if you have it in your opening hand, you can exile another card from your hand to start the game with it in play. This has led to the creation of ‘Turn 0’ combo decks that can kill their opponent before the game has really begun.

This brand of shenanigans is obviously more effective in formats like Modern, which is where the card has seen the bulk of its success, but it's viable in Commander too, for some rare explosive starts. Its high price tag makes it an attractive reprint option for sets like Dominaria United. 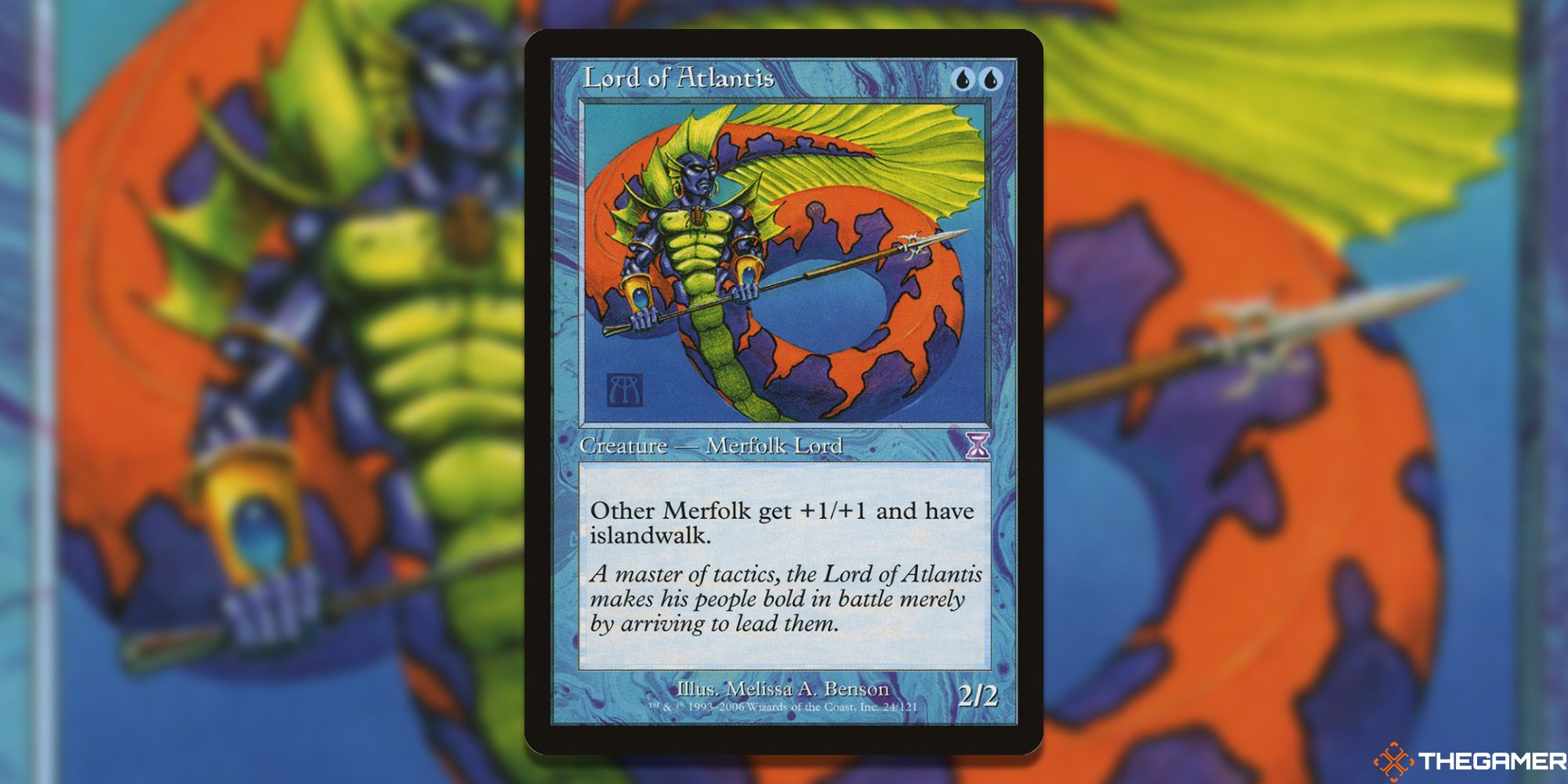 One of the original tribal ‘Lords’, a group of cards that give stat boosts to other creatures of their tribe, Lord of Atlantis is also the most iconic. Serving as a support piece for Merfolk, still blue’s most ubiquitous tribe despite a noble effort from Wizards in recent years, the card sees play in both Commander and Modern.

While Merfolk rises and falls like the tides when it comes to viability, one constant with the deck is the presence of Lord of Atlantis. Despite this, the card hasn’t had a proper reprint since Time Spiral in 2006, and as such is now quite expensive. 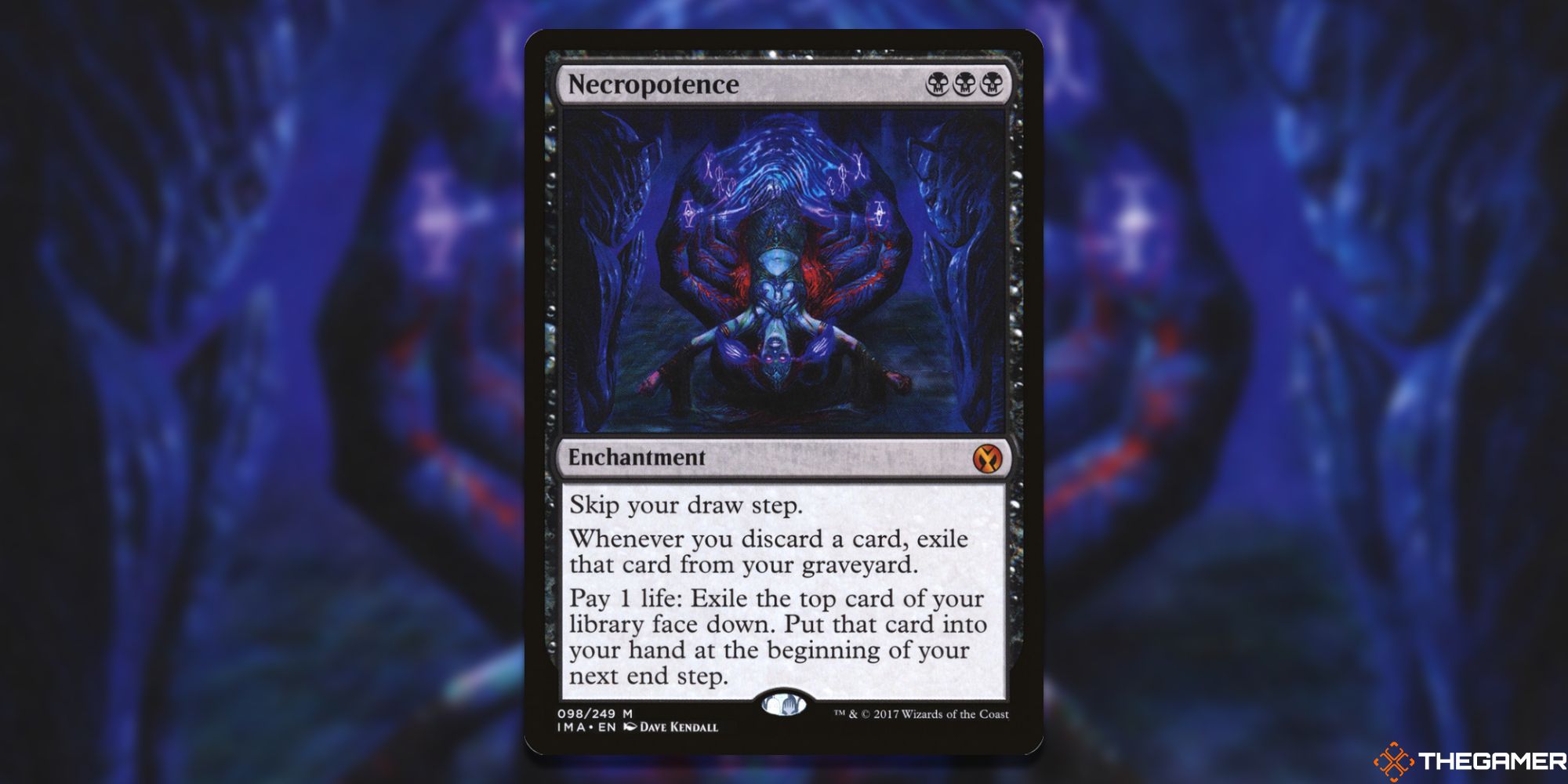 A card that needs no introduction for Magic history aficionados, Necropotence was infamous for being initially underestimated, before proving itself to be one of the most powerful cards of all time. Essentially letting you draw as many cards as you want, provided you have the life to pay for them, the card is even strong enough to be banned in Legacy.

It’s still legal in both Vintage and Commander, however, where it shines as a card advantage engine and combo enabler. When it comes to iconic cards, they don’t come much bigger than Necropotence, making its absence in Dominaria Remastered conspicuous indeed. 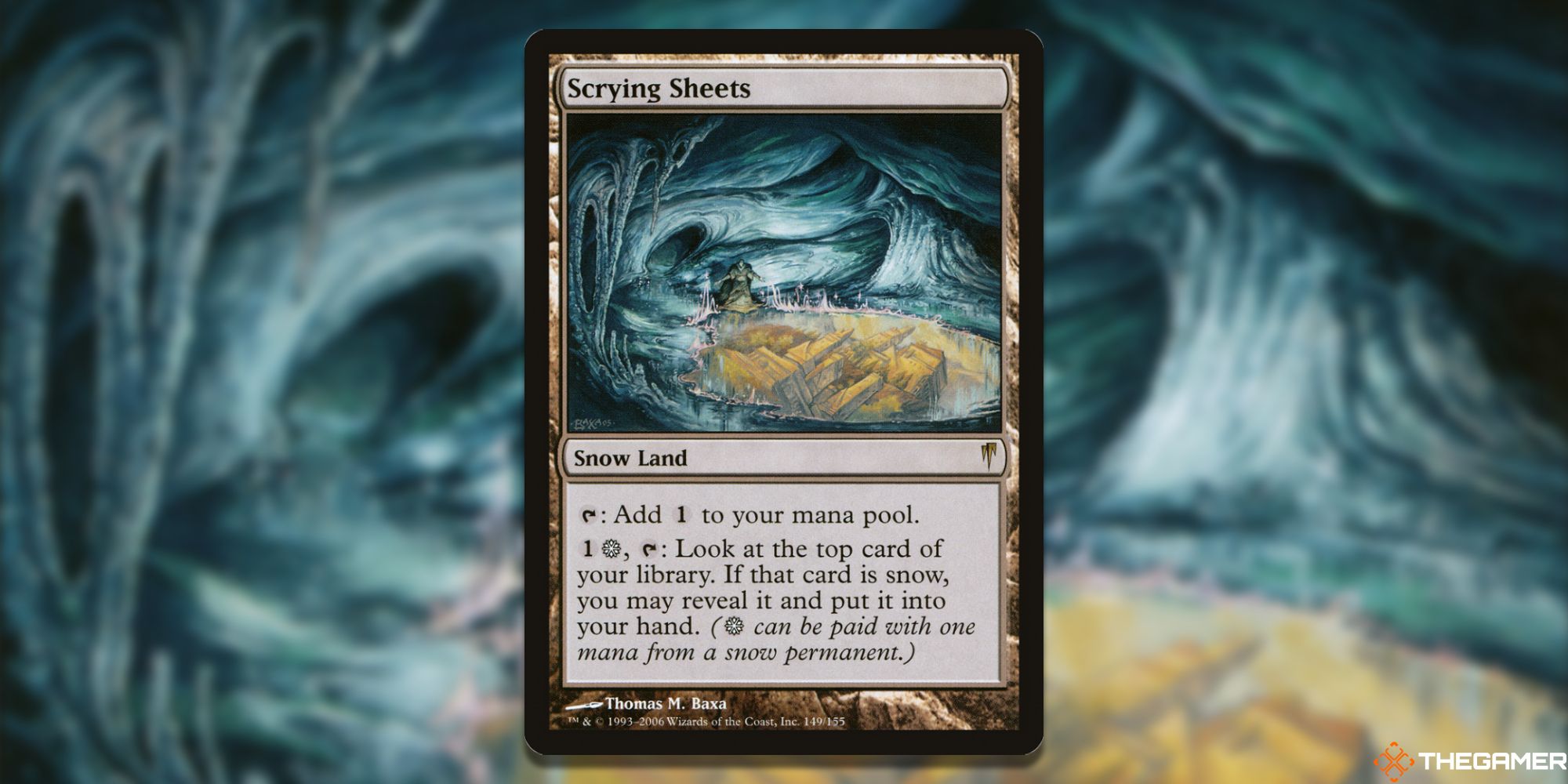 One of the best options for decks built around the Snow mechanic, Scrying Sheets essentially functions as repeatable card draw on a land if your deck is mostly built of Snow. It’s a simple card that manages to be powerful but not broken, yet it hasn’t seen a single reprint since its original Coldsnap printing, despite returns to the Snow theme in Kaldheim and Jumpstart 2022.

Dominaria Remastered was a great chance to correct that oversight, and reprint a staple card for an up-and-coming archetype, but unfortunately the Sheets were Scried to the bottom of the deck for now. 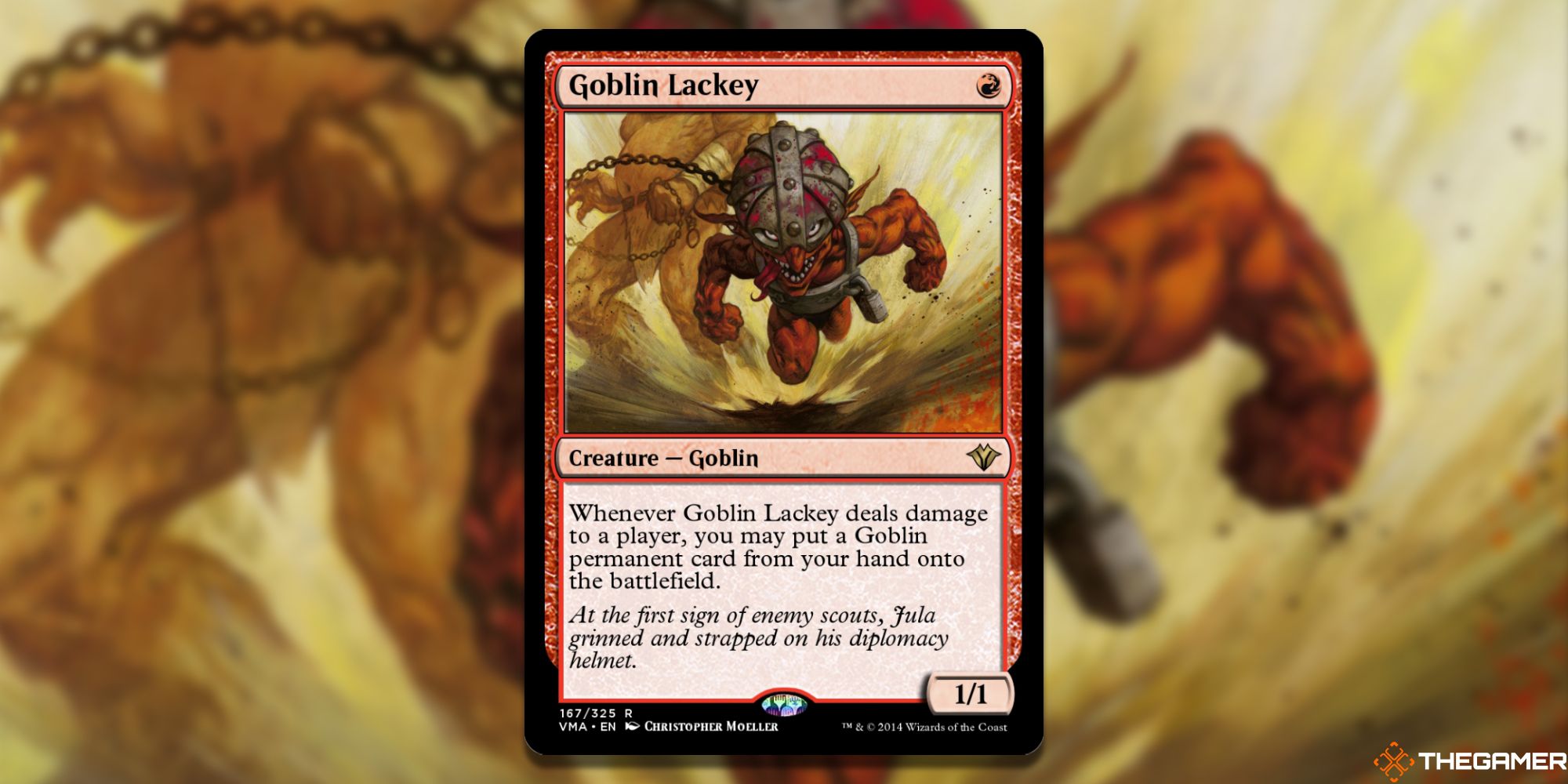 Goblins have been a part of fantasy, not just Magic: The Gathering, since the beginning, and they’re an equally important part of the game too, as red’s most iconic tribe of creatures. There are a lot of powerful options to choose from when building a Goblin deck, but Goblin Lackey may well be the best of them; after all, you don’t achieve success in both Legacy and Vintage by being a fair Magic card.

Letting you cheat high mana cost cards into play whenever you do what Goblins do best and attack, Lackey brings a new angle to the usually hyper-aggressive Goblin archetype, opening up the mana curve and giving you a greater diversity of threats that don’t just fold to board wipes. This makes it a prime reprint candidate whenever the chance comes around.