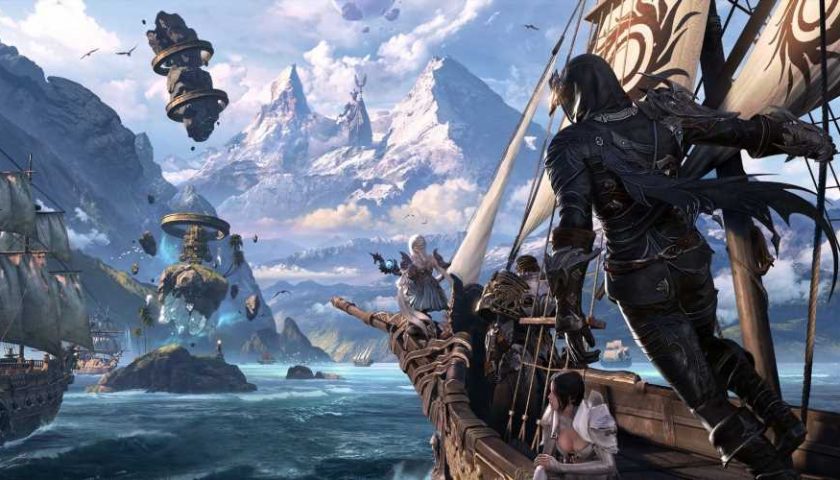 One of the most valuable endgame currencies in Lost Ark is Gold. It's needed to upgrade your gear and purchase items in the auction house. For those who want to earn a large sum of Gold for minimal effort, you'll want to complete Una's Tasks.

Una's Tasks is an endgame quest system that serves as one of your primary sources of Gold. So long as you complete your daily and weekly tasks, you can rack up a large sum of Gold in no time. Let's dive into what Una's Tasks are, how to complete them, and how to exchange Una's Tokens into Gold.

What Are Una's Tasks? 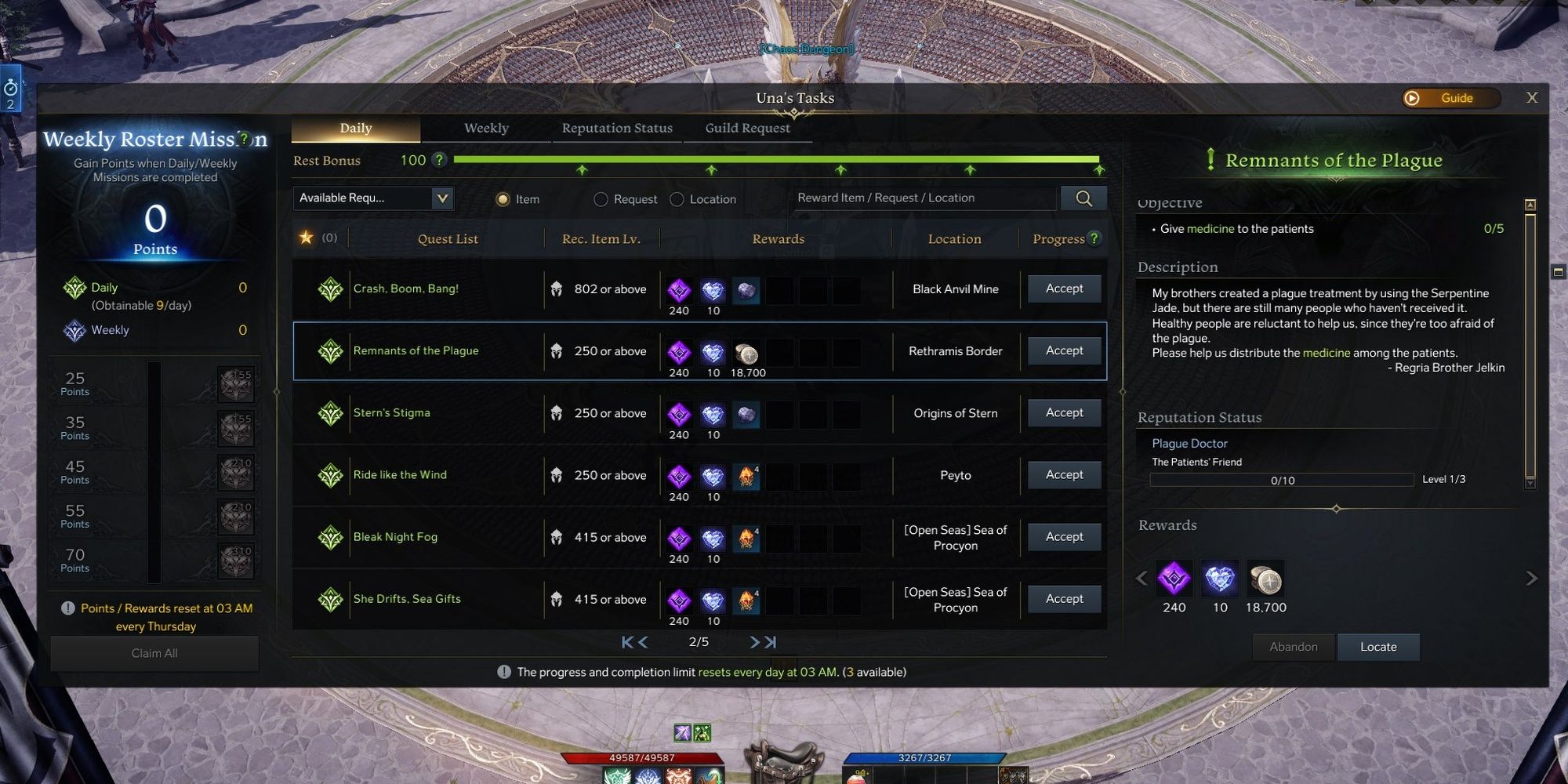 Una's Tasks is a daily and weekly quest system that unlocks once you reach level 50. You can access your tasks by clicking "Adventure" on the bottom-right of your screen and selecting the "Una's Tasks" option. You can also access this menu by pressing Alt + J.

This menu is divided into multiple submenus:

These quests are fairly easy to complete and grant progress towards earning Una's Tokens—a currency you can convert into Gold.

How To Complete Una's Tasks 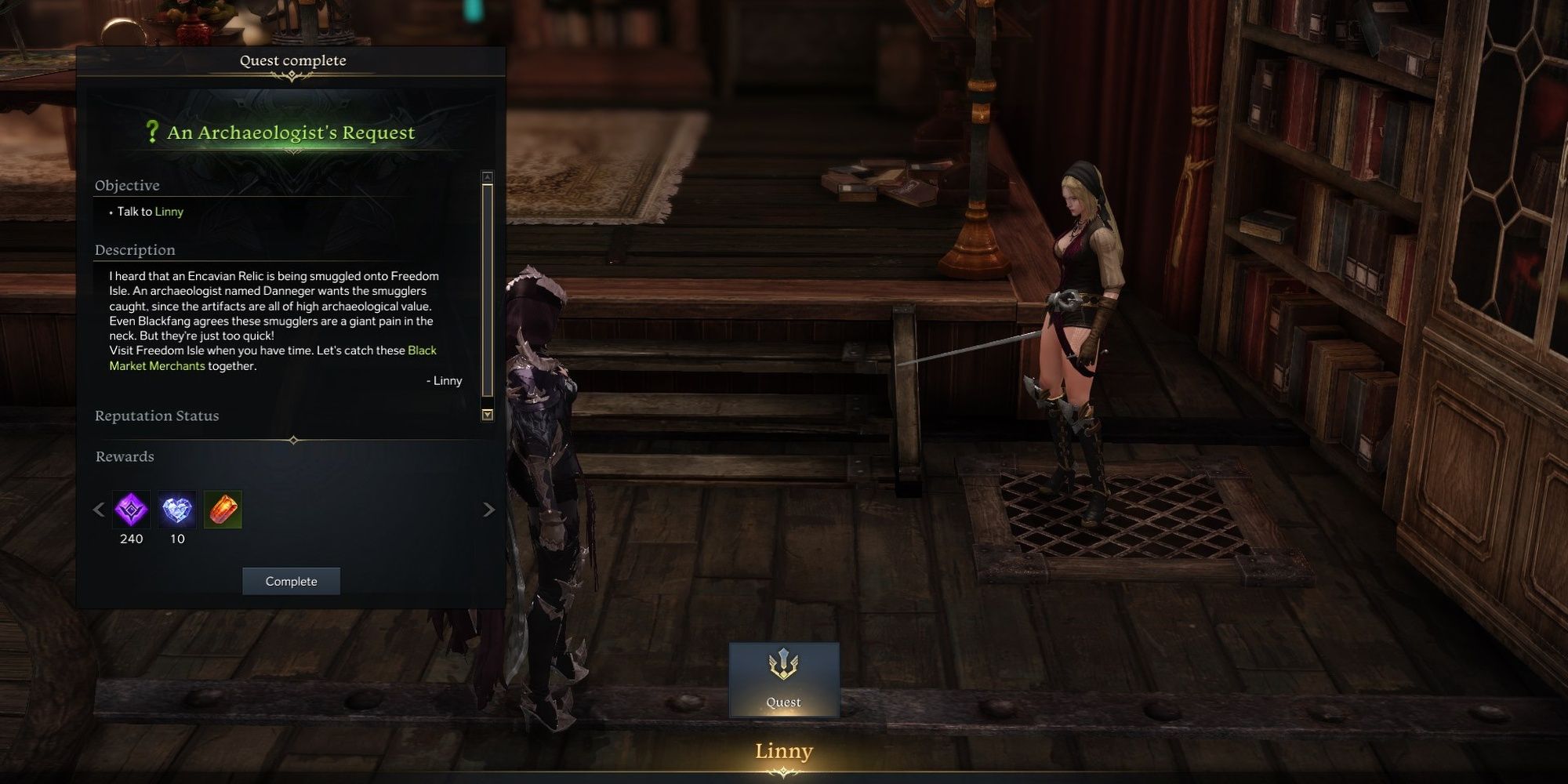 Completing a task is straightforward. Claim a daily or weekly task from the Una's Task menu, complete the objective(s) listed, then return to the Una's Task UI to finish the quest. Daily quests will ask you to travel to some location in Arkesia and complete a minor task, such as killing a few enemies or collecting some items. Weekly quests are tied into Lost Ark's endgame activities and progression systems, such as harvesting multiple Guardian spirits or collecting rare materials while sailing.

You can only complete three daily tasks each day. Only three weekly tasks can be completed each week. Dailies reset at 1 AM UTC, although there is a time offset for each region (explained here). Weekly tasks are reset every Thursday.

Daily tasks can occur at any location in Lost Ark. The daily will tell you the zone the task requires you to visit. Before accepting a task, you can always click the "location" button beside the "accept" button to discover where the task's location is. Some tasks occur in the same zone, so we recommend saving some areas in your Bifrost slots to save time.

You can favorite tasks to find them more easily whenever they reappear.

By default, completing a daily will grant reputation with a specific NPC and points towards earning Una's Tokens. However, should you miss any daily completions on your character, some dailies will grant additional rewards when completed as a sort of catch-up mechanic. These additional rewards include upgrade materials, ability stones, and vendor tokens.

Here are a few example tasks and rewards you can expect from Una's dailies:

A consumable item called "Una's Task Instant Complete Ticket" can be purchased from the cash shop to instantly complete a daily Una's Task, up to your daily cap. The Platinum Founder's Pack gives 10 of these tickets in the level 50 Hero's Ascent Chest. 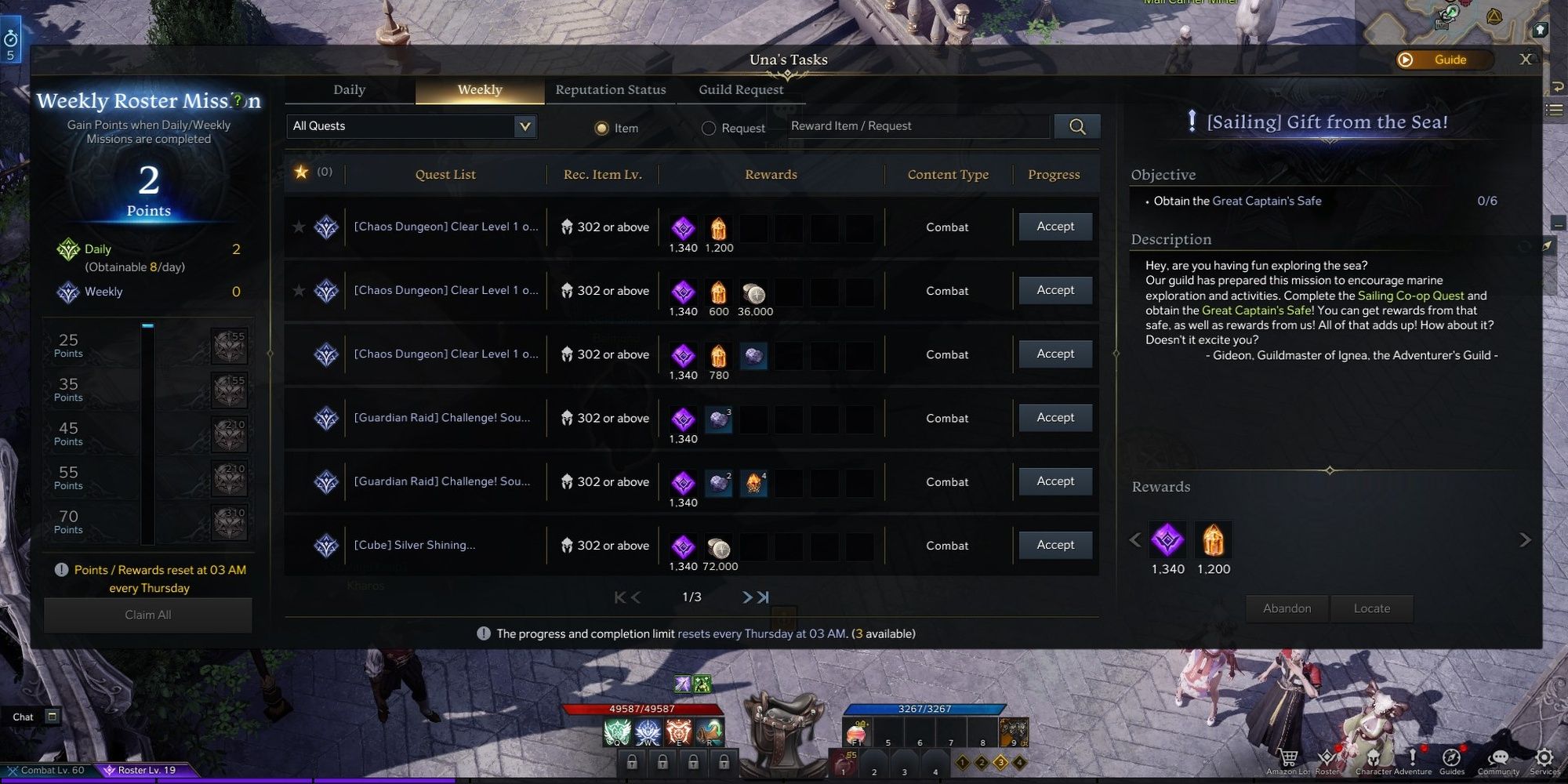 Weeklies revolve around Lost Ark's various endgame activities, requiring you to complete these activities a certain number of times to earn rewards. Unlike dailies, weeklies have no catch-up mechanics and grant all of their listed rewards when completed. You can only have one weekly task active at any moment.

Here is every activity tied to Una's weekly tasks, along with each task objective. 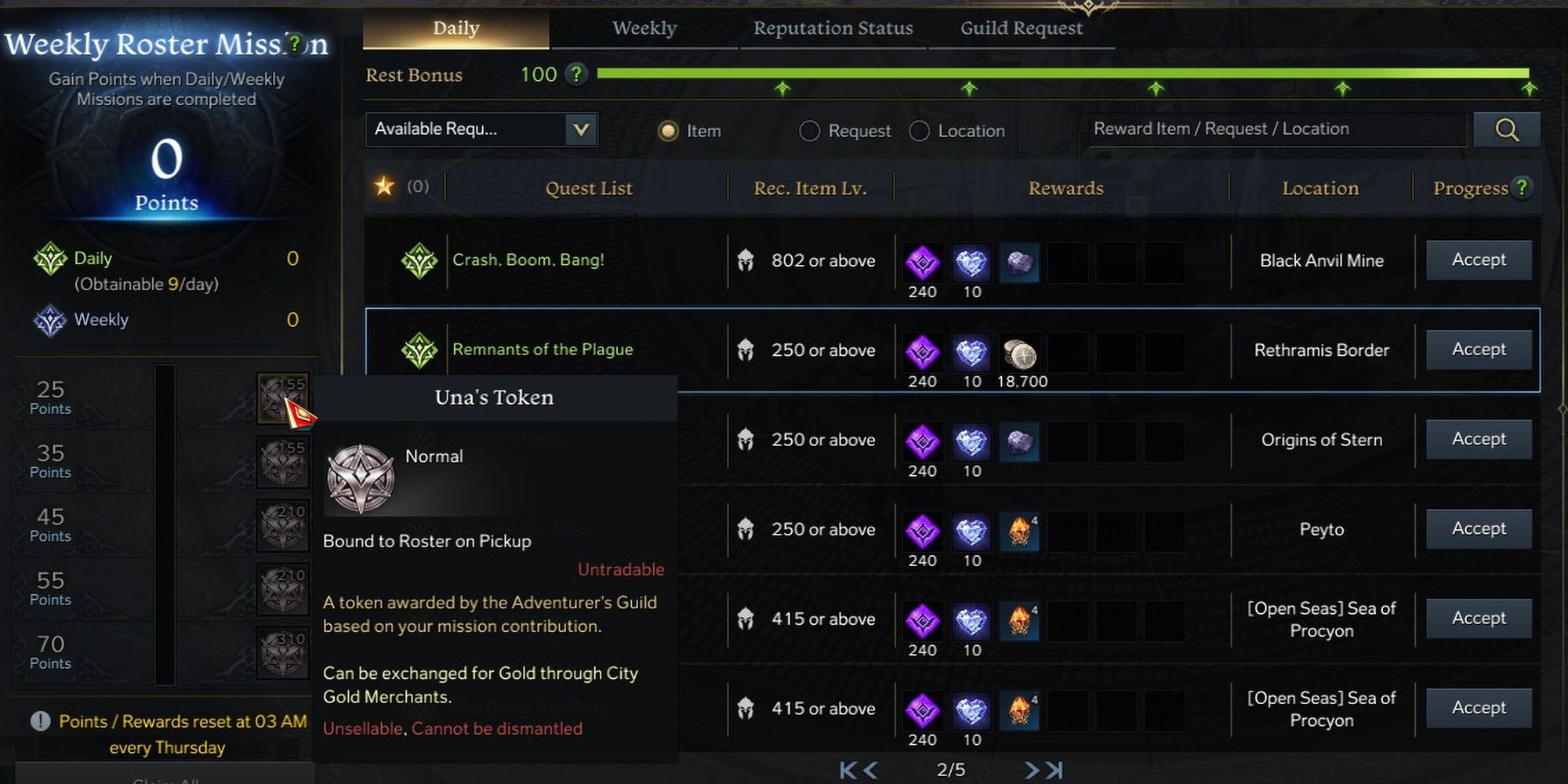 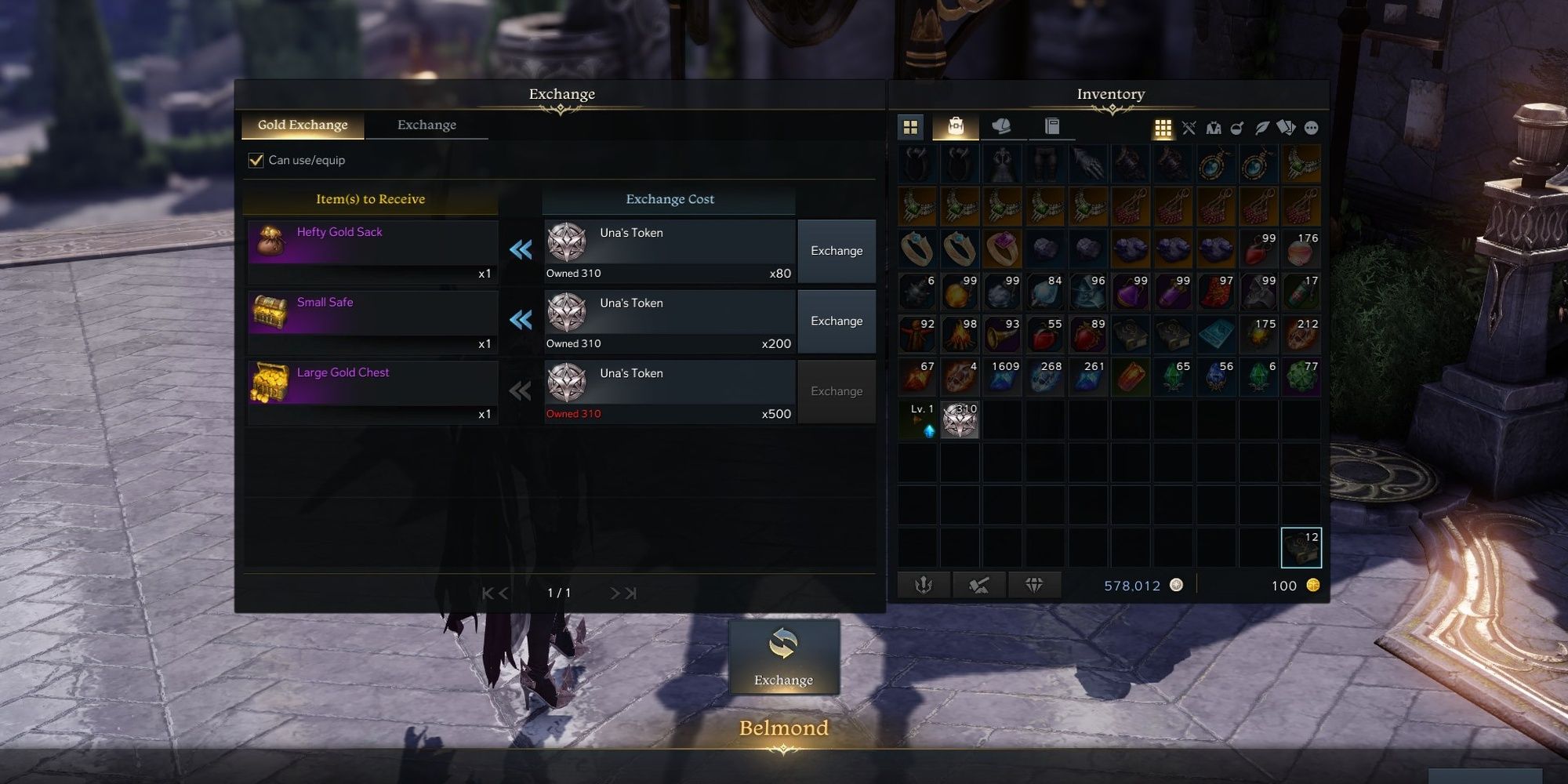 At any time, you can open the Una's Tasks menu (Alt + J) and claim your Una's Tokens. The left-hand section of the menu will let you claim every token you've earned up until that point. Should the weekly reset occur before you claim your tokens, you'll receive your unclaimed Una's Tokens in the mail.

With your Una's Tokens, speak to any gold exchange merchant in a major hub town. These NPCs will convert your Una's Tokens into bags of Gold. Each bag will drop a random amount of Gold within a set range. For example, small pouches tend to drop around 200 Gold. Small Safes drop around 700 Gold. The highest tier of pouch, the Large Gold Chest, drops a large sum of Gold and has a chance to drop a Giant Gold Bar worth 10,000 Gold.

Try to purchase the Large Gold Chests with your Tokens, but if you're a more casual player, the Small Safe is perfectly fine. We don't recommend buying the Hefty Gold Sack unless you are short on Una's Tokens and can't play much that week. The cost of each Gold pouch is listed below: 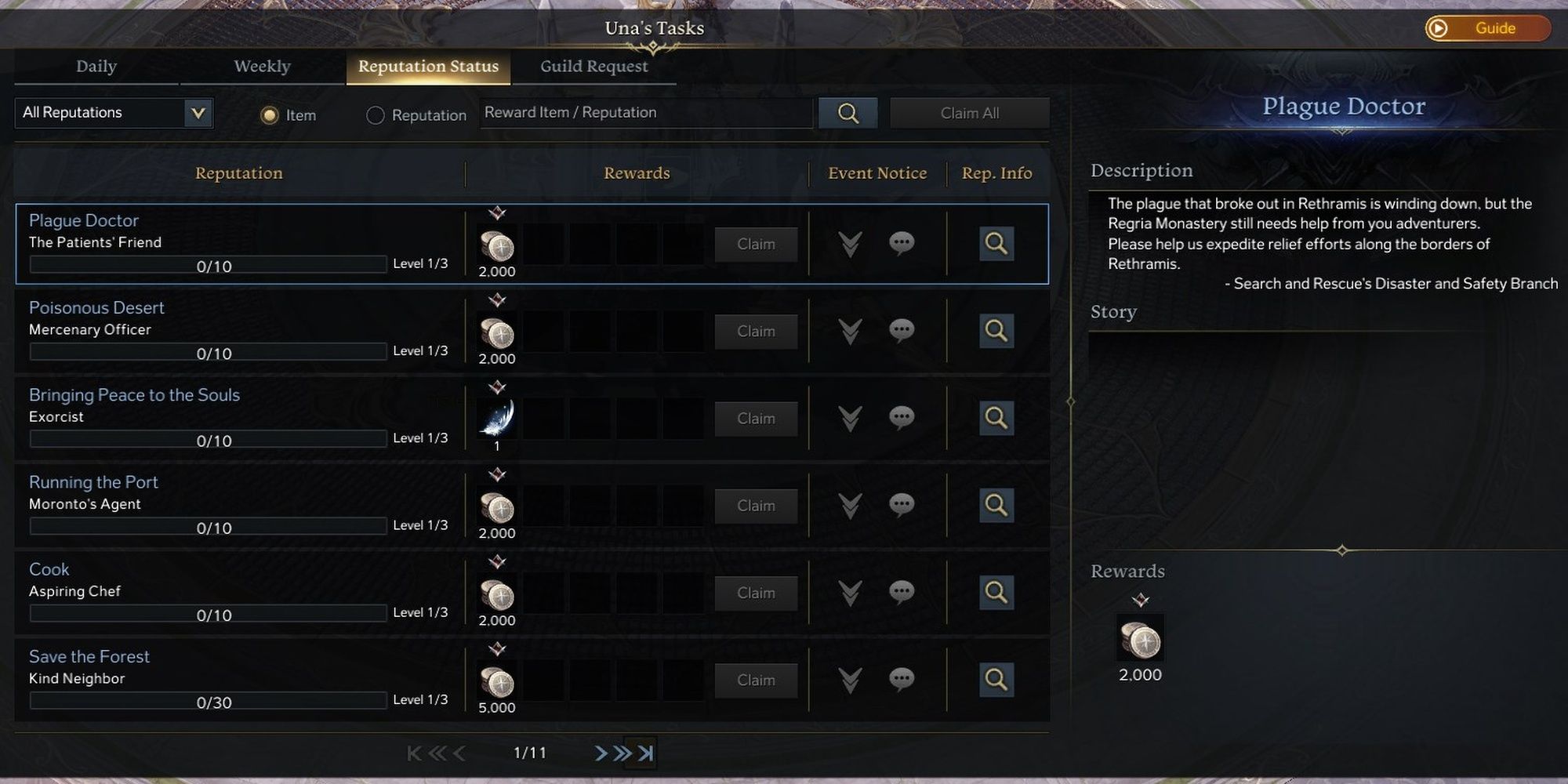 As an additional incentive to complete your daily tasks, each daily task completion will increase your reputation with a specific NPC by ten. Upon reaching certain thresholds, you can enter the reputation submenu in the Una's Tasks UI to claim additional rewards. These rewards typically grant currency (Silver and Pirate Coins), but they can also give cosmetic rewards for your Stronghold. Each NPC has three reputation levels, and there are 65 NPC reputations you can increase through this system.