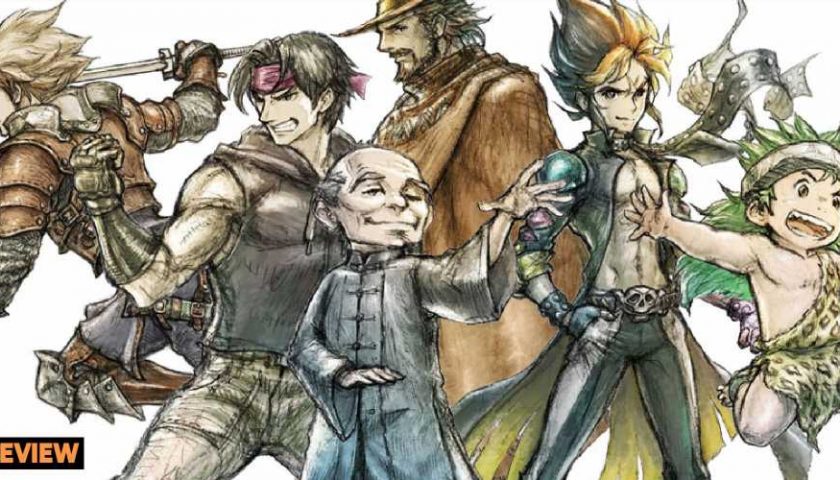 Live A Live is unlike anything I’ve played before. Despite growing up on a steady diet of JRPGs, the first I ever heard of this forgotten classic was when the remake was announced a few short months ago. Hardcore fans couldn’t believe it, with the game having never been released outside of Japan. For years they’d settled for fan translations, but now they weren’t just getting a long-awaited port, but a comprehensive remake.

Sporting the same HD-pixel aesthetic as Octopath Traveller and Triangle Strategy, this gorgeous revival is far more than a simple conversion onto new hardware. It’s a bold, beautiful, and immersive journey through eight distinct storylines each filled with unexpected twists and turns. Any of these campaigns could justifiably support an entire game of their own, but Live A Live weaves them into a singular narrative that both subverts the genre while daring to push it forward. But is it worth playing today?

JRPGs are no stranger to following several characters across different locations as the narrative moves forward. Contemporary greats like Final Fantasy 7 Remake and Persona 5 feature huge ensembles coming from disparate backgrounds, with distinct motivations that eventually intertwine with the main character as they work together in pursuit of a common cause. We see new parts of the world from unique perspectives that allow us to empathise with the finished party, and so many games are that much stronger for taking their time and letting us drink in their world building and lore at our own pace. 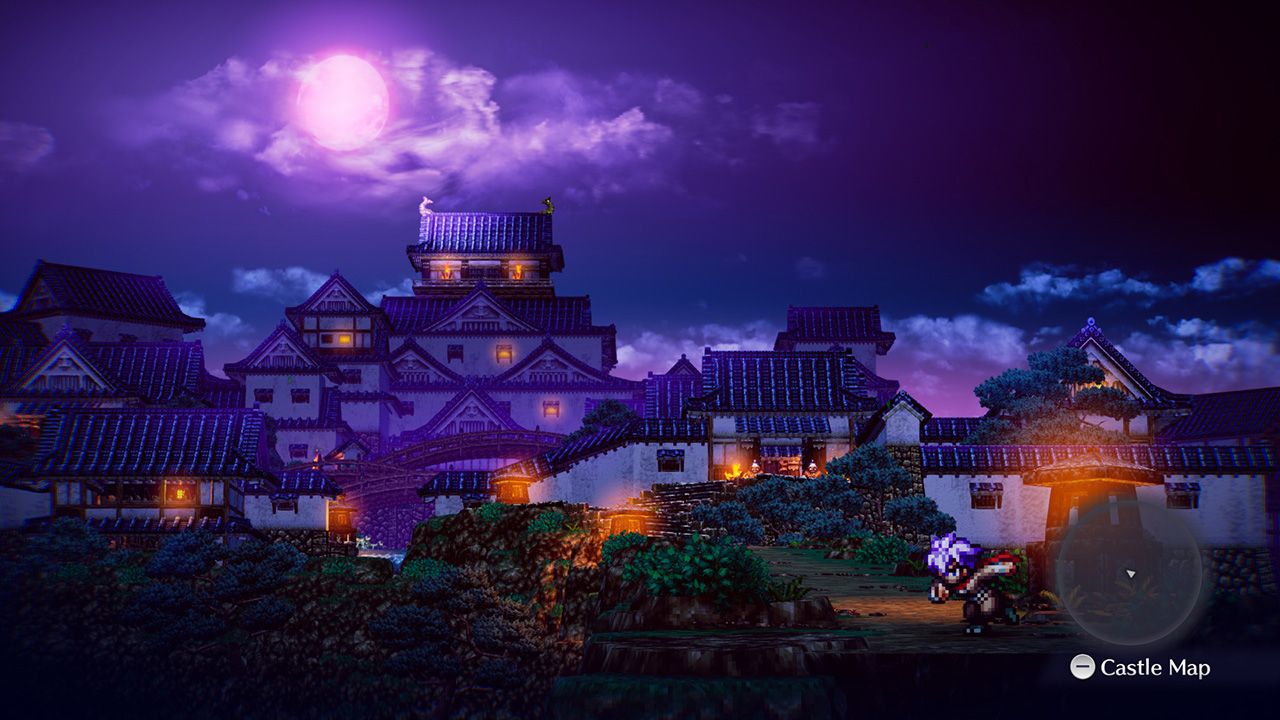 Live A Live goes against so many of these conventions, and I love to think about what the genre would be like nowadays if this game did explode in the West and went on to have a massive influence. It’s so wild, pitching a concept and executing it with charm and confidence, even if it does still operate on a few dated tenets that only hardcore purists will be willing to put up with. As part of this preview I can only touch on a handful of the eight characters, each of whom follow a separate storyline and feature a bunch of unexpected gimmicks as you travel together through time linking together an initially disparate yarn.

All the eras in the game are as follows: Prehistory, Imperial China, Edo Japan, Wild West, Present Day, Near Feature, Far Future, Middle Ages. You play as a new character with each chapter, all of whom I named ‘John Cena’ to ensure some level of cohesion to proceedings. While the central battle system remains the same throughout the entire game, the majority of characters have unique abilities or manners of traversal that constantly defy our expectations and provide a look at this world that once seemed impossible. One moment you might be the main character in a cheesy mecha anime before morphing into an up-and-coming professional wrestler eager to climb the ranks and become champion. 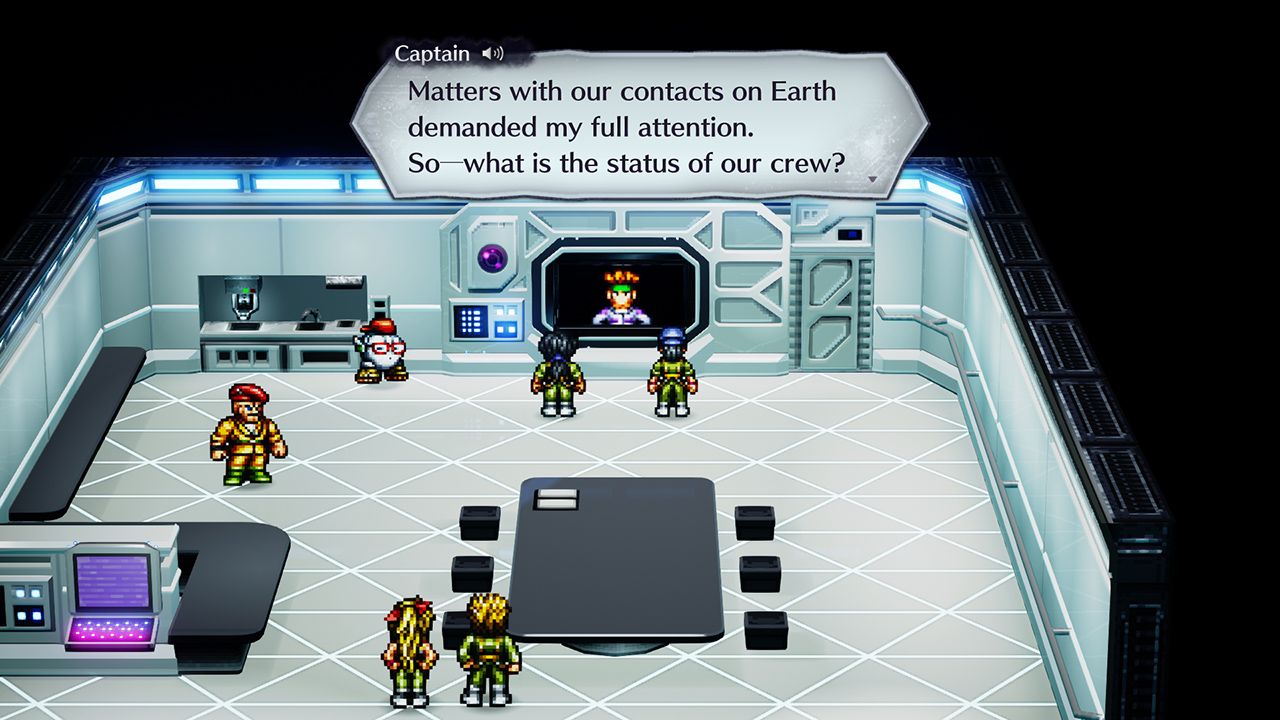 Live A Live is so surprising, and despite its retro visuals might be the most refreshing JRPG I’ve played in ages. Edo Japan follows a rookie assassin who is tasked with sneaking into a sprawling castle and bringing down the leader of a corrupt Shogunate. You can leave behind a path of bloodshed by murdering every guard who crosses your guard, or utilise a special ability to hide in the shadows and walk by unnoticed as enemies spend ages searching for you. The decisions you make will seemingly influence the unfolding story, and make life that much harder for yourself since this level is huge and filled with foes who will murder our hero on sight if he isn’t careful. While this gimmick is little more than a single button press, in the context of eight different characters it still manages to mix things up just enough to justify itself. This feels like an amazing idea in 2022, so I can’t imagine how it went down back then.

The Far Future doesn’t have us controlling a human at all, but instead a maintenance robot who is powerless to stop a monster known as the Behemoth who escapes confinement and begins to murder your crew aboard a state-of-the-art spaceship. Survivors begin to turn on one another as the situation grows more desperate, with the player having to observe conversations and come up with whatever solutions they can in the face of chaos. The homage to 2001: A Space Odyssey and Alien couldn’t be more obvious, but it riffs on the classics while also never being afraid to introduce its own ideas in the mix. 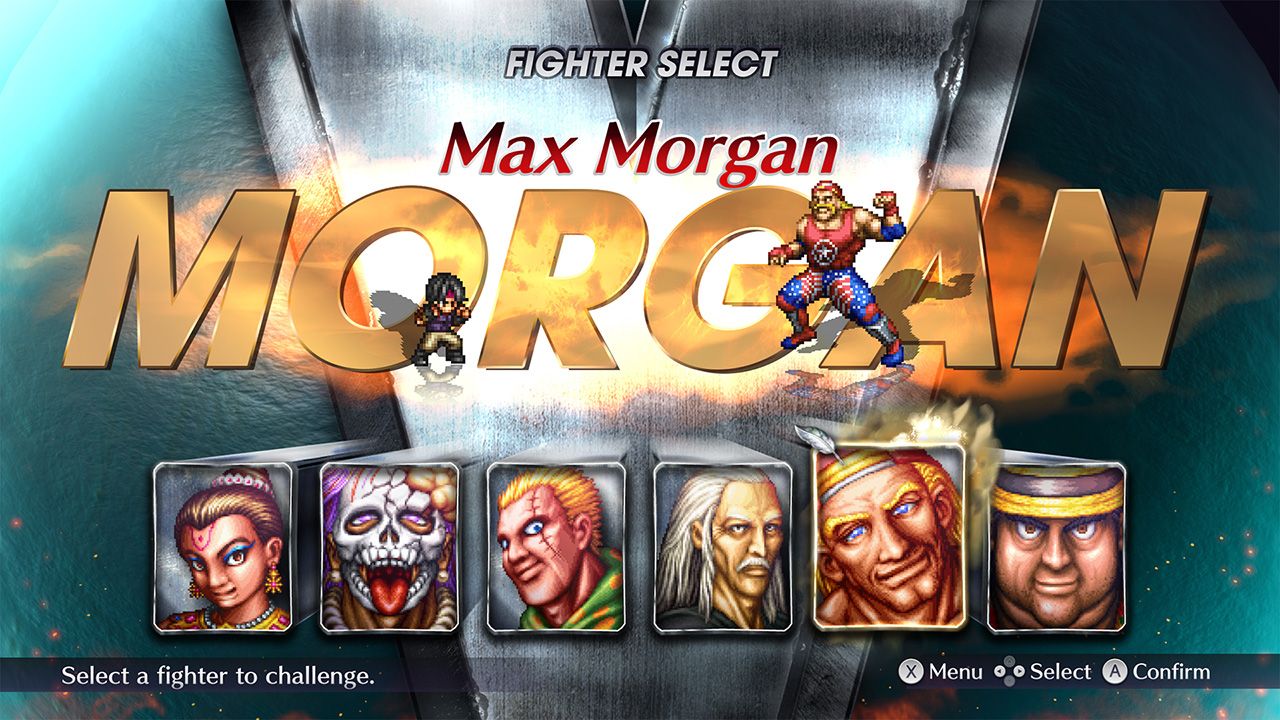 In the Wild West you play as an infamous gunslinger known as the Sundown Kid (John Cena) who rides into a nearby town on horseback who ends up working with his formal rival Mad Dog to defend innocents from a murderous gang of outlaws. While these mercenaries might appear as bloodthirsty killers on the surface, they’re more than willing to do the right thing if it means defending those who don’t deserve misfortune, and this specific storyline plays on classic western tropes in a similar vein to other chapters that are always willing to have fun with classic media. You can tell the development team had a blast making this.

I can’t talk about other storylines as part of this preview, which is weird given the emulated version has been available online for decades, but you can expect each time period to feature new characters, new mechanics, and new elements of lore that will eventually culminate into a single tale. I believe so anyway, with enough hints being dropped that something is going on beneath the surface ready and waiting to be uncovered. 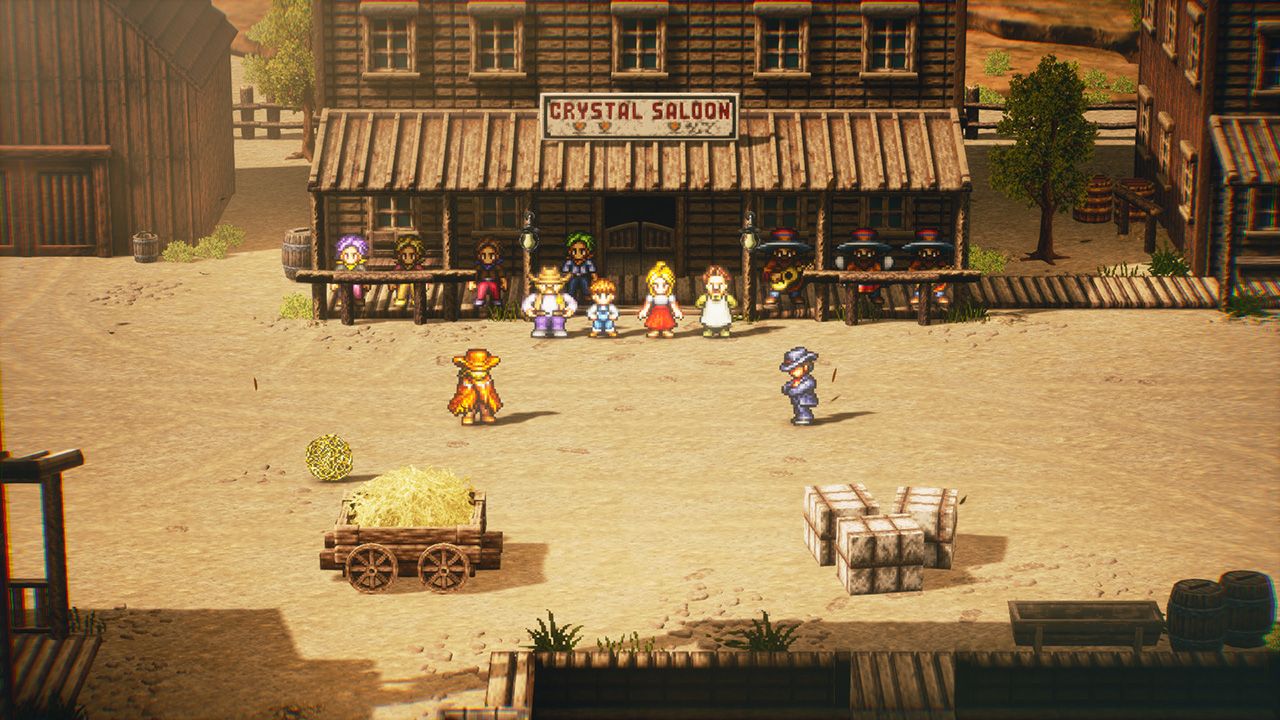 Live A Live is so original, but does fall victim to a few archaic shortcomings that are impossible to avoid when adapting a game of its age. Objectives aren’t fed to you, meaning to progress you’ll often need to link events together yourself or talk to anyone and everyone in search of a hint on what to do next. This didn’t bother me, both because the music slaps and the new translation is killer, but it does harken back to a time in the genre’s life that we’ve long since left behind. Dialogue also has a deliberate pace, and the juvenile sense of humour employed by much of the game won’t be for everyone either. I came to love it, often reminded of the first time I played games like Final Fantasy 6 and Chrono Trigger.

Oh, and this game is bloody gorgeous. It builds on the beauty of Octopath Traveller and Triangle Strategy. Classic pixel visuals are brought to life with a stunning mixture of oversaturated colours alongside a depth of field effect that brings environments into subtle focus and helps them feel so much larger than they actually are. On the Nintendo Switch OLED it was hard not to be blown away, with particle effects all but soaring off the screen and new locales drawing me with a mixture of vibrancy, scale, and variety that few in the genre can match. 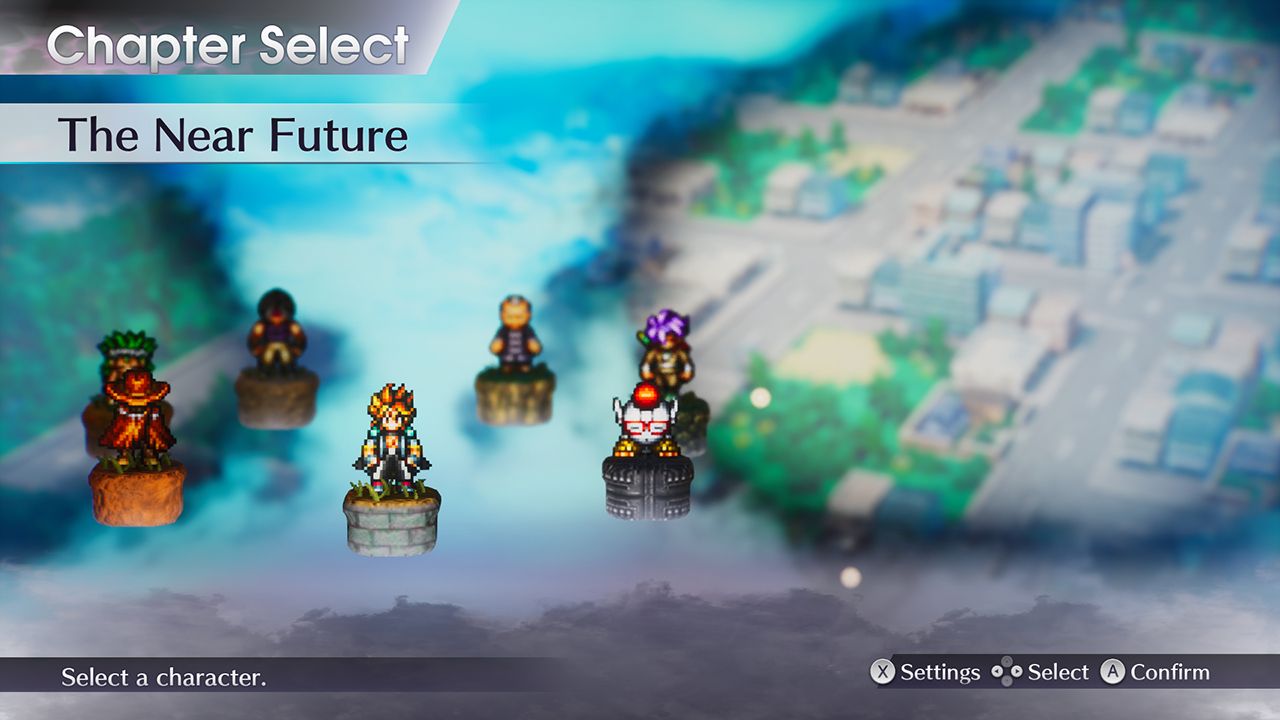 Live A Live is super cool, and I mean that in the nerdiest way possible. This is a game for hardcore JRPG fans and those who have been waiting for this forgotten classic to be given a second lease of life outside unofficial translations. From what I’ve played, the wait has almost certainly been worth it even if its age is showing a smidge in places.