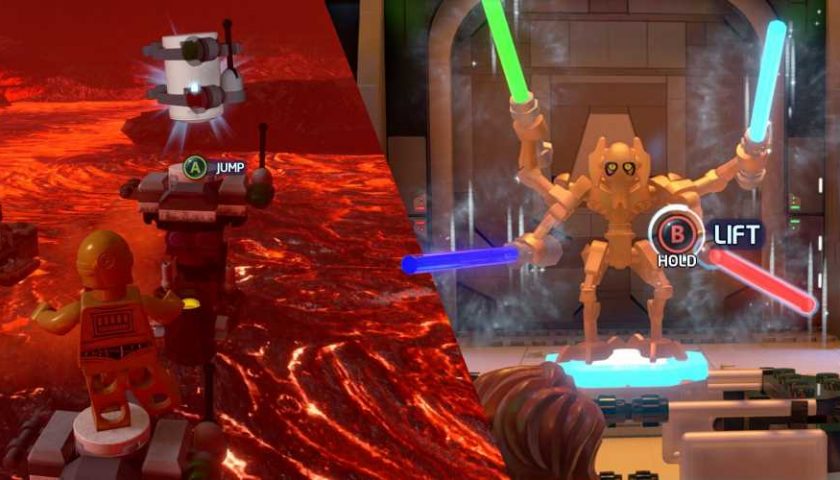 Concluding the prequel trilogy, Episode 3 concludes the tale of Anakin Skwalker. LEGO Star Wars: The Skywalker Saga gives us a more comical spin on Anakin Skywalker's descent into the dark side. However, while Anakin loses himself looking for power, you are at risk of getting lost looking for Minikits.

The Minikits available in Revenge of the Sith are hidden on the sides of cliffs, concealed in the ceilings of rooms, and often require character-types that are only available in the free-play mode. We will guide you through how to best acquire every last Minikit in the fewest amount of attempts possible.

Out For The Count

At the beginning of the stage, take a left (using a villian-type character to blow the door down). Head straight until you are in the southeast corner of the map. Here, there is a room filled with droids and spare parts. Destroy everything in the room and you will be able to assemble the "Extra Parts" Minikit piece. Now, leave that room and take a left. Run down this hallway until you run into an astromech console on your left. Use an astromech droid to open the door and enter the room. Pull all the switches and you will acquire the "We're Smarter Than This" Minikit piece.

From that room, take another left and go straight and you will run into a wall of lasers with the top half blinking in and out. Push the nearby block up close to the laser wall and jump over the lower section. Just around the corner, there is a pile of junk. Destroy it and you will obtain the "It Lay Beyond Lasers" Minikit piece.

Now, return to the starting area. Here you are going to want to progress through the stage allowing the arrows to guide you. Once you hit a room that has a silver chest, use a villain unit to blow it up and build a lever that will allow you to open the door on your right. Move through that door and continue straight until you hit a room with a protocol droid terminal. Use a protocol droid to open the closet, revealing the "Store Room Surprise" Minikit piece. Use the protocol droid to also control the Droideka, which will burst through the door, allowing you to progress.

In this next area there will be a door that can be cut open using a lightsaber. In that room, there is a statue of General Grievous. Use the Force to place a lightsaber in each of his hands. Once you do this you will be rewarded with the "Grievously Egotistical" Minikit piece.

Deal with Grievous' first phase just to get him out of the way, then run straight ahead. Jump into the seat of one of the turrets and shoot down five Vulture Droids. This will earn you the "Droid Hunt" Minikit piece. Now, turn around and you will see a terminal for hero-class characters. Use Commander Cody to interact with it, opening up a lightsaber path on the way. Scale it using Obi-Wan and then slide down the line. This will provide you with the "Walk This Way" Minikit piece.

From there, run to the other side of the stage. Drop down to a lower level. On the right side there is a wall that can be carved up using a lightsaber. Doing this will grant you the "Circuit Breaker" Minikit piece. On the left side, you will see an astromech command console. Interact with it using an astromech droid and a Varactyl will run out from down below and give you the "Varactyl's Back, Alright!" Minikit piece. This will obviously require that you play this stage back in the free-play mode. As will the last Minikit piece.

Continue the battle as normal until Grievous flees the second time. Once he runs up the left side, you will be able to follow after him up to the second level. However, from here jump down to the platform below. You will see a villain terminal. Use a villain class character to interact with it. The machine will shuffle through a few different droids and land on a vulture droid. Use a grenade to blow it up and you will receive the "Prototype Vulture Droid" Minikit piece.

Droid Attack On The Wookies

When you get to the section where there is a giant tree, get in the nearby turret and shoot off all of its branches. Eventually, the "Just Nesting" Minikit piece will drop down. Then, build the hovercraft, allowing you to take the rightmost path. Use the scoundrel shot to shoot the torch above the vines, lighting them on fire.

This will allow Yoda to run across the wall. You will then be able to obtain the "Views from Kachirho" Minikit Piece. Finally, when you get to the escape pod, there is a Minikit piece on the side of the cliff. Just look over the edge and you will see some rails that you can hold onto. Climb down and grab the "Cliffhanger" Minikit piece.

You will need to play the mission in free-play in order to acquire the "Loot Drop" and Boom Box" Minikit pieces. You need to put a powercell in the satellite dish (on top of the hut with the zip line). In order to access the roof, and obtain the power cell, you will need a bounty hunter. Shoot the gold restraints on the door at the beginning of the stage, then progress to the hut where the holographic emperor is giving orders. From there, destroy the gold box containing the powercell.

Finally, carry the power cell to the ledge (that you opened up by blowing open the door earlier), jump onto the roof, and plug it into the satellite. As for the "Boom Box" Minikit piece, you simply need to destroy the three silver structures at the end of the stage using a villain-type unity. None of these statues are hidden, they are all in plain sight.

To begin, have Captain Typho pull both switches in the room. This will drop the "Just Dropping In" Minikit piece down from the ceiling. Next, while doing his spinning lightning attack, Palpatine will destroy the desk. Rebuild it and get the "Rage Quit" Minikit piece. Now continue that battle as normal until it transitions to the next phase (where you are fighting on the disc-shaped platforms).

Lastly, across the way from where you start, there is a minikit sitting on a distant platform. You will need a scavenger in order to claim it. Come back in free-play mode and use the scavenger's glider to cross the gap and claim the "Salvage Hunters" Minikit piece.

You will not have access to the glider tool unless you have completed the Rey's tutorial from Episode 7.

There are two Minikit pieces you can obtain in the story mode. One is at the very beginning of the stage. Just destroy the objects near the structure that has a Minikit on top of it. Then, build a bridge using the pieces. This will get you the "Brittle Balance Beam Building" Minikit piece.

The other is at the very end of the stage when you are fighting Anakin in the lava river. Just have C-3PO jump from the platform onto the floating droid. The droids will start to assemble a staircase of sorts that will lead to the "Mustafar-far Away" Minikit piece.

Everything else requires that you come back in the free-play mode. For starters, fight Anakin until he flees the first area. Then, use a bounty hunter to travel into the hanger on the left. There is a gold box here. Melt it and you will receive the "A Pesky P-100 Problem" Minikit piece. Now progress to the hologram room.

After you fight Anakin in the room filled with holograms, switch to a villain-type character. Use them to open the door by interacting with the terminal. Then, enter the room and throw a grenade at the silver box. Now, grab the one working powercore and slot it into the space near the band. This will grant you the "Mustafarian Metal Music" Minikit piece. Head back into the hologram room. Now, use a scoundrel-type character to target the power cord leading to the broken Holotable with the scoundrel shot. After the explosion, use the pieces to rebuild the holotable. This will earn you the "Holotable Hotfix" Minikit piece.