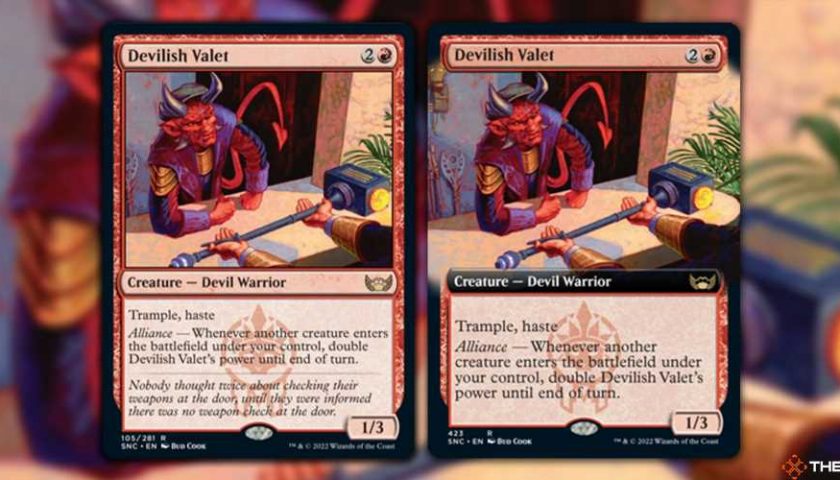 Making infinite anything in Magic: The Gathering is pretty easy. There are a number of different card combinations that’ll generate infinite mana, infinite tokens, or infinite power on a creature with fire breathing. Making a very large number in Magic is a lot harder, but the latest set made it a whole lot easier.

According to YouTube Channel Good Morning Magic, the previous record holder for a three-card, non-infinite amount of damage was Doubling Season, Rite of Replication, and Hagra Diabolist, which could deal 1,211 damage. More than enough to end most games considering Magic: The Gathering provides each player with a starting life of just 20, but even that is a paltry sum compared to the new record holder.

Streets of New Capenna, Magic’s latest expansion, provides a wicked new creature in Devilish Valet. A ⅓ with trample, haste, and the new Alliance ability, which doubles the Valet’s power every time a new creature comes into play under your control.

Combine that with Army of the Damned (a black card that creates 13 2/2 zombies) gives the Valet 8,192 damage. Flash it back to give the Valet 67,108,864. Remember, the Valet says to double its power each time a new creature arrives, and since the stack makes Valet’s ability trigger with every new token created, the Valet’s power grows exponentially.

Of course, having either a 67,108,864-power Devilish Valet or 67,108,864 Saproling tokens is more than enough to win most games. Really, just playing Army of the Damned alone is pretty great. But Magic is about going big, and 302 sextillion seems pretty big.