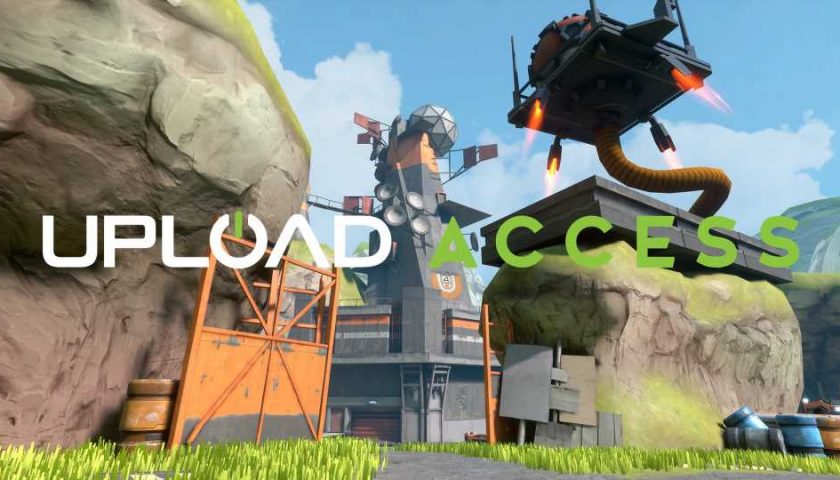 A bit of VR trivia for you: Farpoint didn’t have 90 degree turns. Like, at all.

Thinking back about it, I realize that’s obvious; you can play the entire campaign without ever once artificially turning the camera. In an effort to keep the game as comfortable and immersive as possible, developer Impulse Gear instead created a network of gently-winding corridors you could navigate with slight twists of your head. It was a curious and rightly cautious bit of design for a 2017 PSVR game.

Four years on, Larcenauts doesn’t exactly share the same concerns. In fact, you could say Impulse Gear has done a 180.

Aside from still being a shooter with a sci-fi setting, Larcenauts is a very different beast to Farpoint. This new hero shooter is multiplayer-focused and decidedly more playful in tone. It also reflects the team’s transition to the wider VR ecosystem, where SteamVR and inside-out tracking let players fight with a full 360 degrees of freedom. Its 6v6 matches (much bigger than Farpoint’s post-launch 1v1 multiplayer mode) are fast-paced, with sliding mechanics and grapple points to zip around maps, and the developer has ambitions to contend in the competitive scene.

How, then, did the team go from its cinematic single-player beginnings to this?

“You look at Farpoint and we learned so much,” says Greg Koreman, co-founder at Impulse Gear. “It was a really good experience, it was breaking new ground in virtual reality. And then what we did was we tried a lot of new things [..] but we knew we wanted to make something multiplayer, and that’s when we looked at getting this thing up and running that would be not just 1v1 multiplayer, we wanted something that was full teams battling.”

This ambition was, in part, spurred on by advancements in recent headsets. Farpoint did a great job of working with PSVR’s 180-degree tracking thanks to smart design choices like those subtle turns. But robust SteamVR and Oculus inside-out tracking systems aren’t as constrained.

“It gets rid of a lot of those issues that we had to deal with in past game design and allows us to focus more on the interactivity and the overall game mechanics,” explains co-founder Seth Luisi, “which is a lot of fun to do.”

Larcenauts, then, sees the developer let loose. “It’s a fast-paced game,” Koreman says. “When you die, you respawn and you have to find your team again. Some of these shooters are a lot slower paced – when you die you’re out. That’s not the case at all here with Larcenauts. When you die you’re coming back into the game, ready to go and you’ve got evolving fronts, you’ve got more frenetic gameplay.”

But let’s back up a second. Even with advances in VR tracking, Larcenauts goes quite a few steps further than Farpoint’s considered pacing. And those that know their PlayStation history will remember Luisi’s work on decidedly slower, more tactical shooters like the long-running SOCOM franchise with Zipper Interactive. Why didn’t Impulse Gear instead opt to take on the likes of Onward and Pavlov, which have seen a lot of success in emulating modern combat?

“I’ve worked on lot of those military shooters in the past with SOCOM and MAG, so I have a lot of experience working on them,” Luisi says, “and you get to a certain point where it just comes down to having different weapons.

“To be authentic to that type of gameplay you can’t really push [VR] that far. So even starting with Farpoint we were really looking at, well, what are some of these interesting weapons and different things we can do and different firings modes, and how can we really bring that to gameplay to look at offering something new. And I personally wanted to take that much further with Larcenauts where each character has their own individual abilities that are very different from what we get out of normal strategy or military sim games.”

Larcenauts, then, is all about tapping into those abilities. Not just on the character front, where each of the eight classes (or specialists) has unique perks, but also on a purely mechanical level. Maps are populated with grappling points that players can zip between for a sense of speed, and every weapon has an alternate firing mode, like a rocket that can be directed after it’s launched.

“It’s going to take a very long time to master Larcenauts,” Luisi says. “This is not a game where you play one or two rounds and you kind of understand the game. There’s a lot of depth there between all the different abilities, all the different characters.”

“And really, when you come down to it, when we’re designing a character we don’t look at what are the abilities at first,” Koreman adds. “We look at what gameplay role are we really trying to fill and then you start digging into “What would be really cool with this character that needs to advance really quickly and get into the fray and then get out?””

You will see traditional class structures, then. There’s a take on the medic, a sniper, a tank class and the like, but Larcenauts wants to harness VR to give each a unique twist. Koreman and Luisi are tight-lipped about specifics right now, but the trailer shows players generating shields they can lean out from and take potshots, and a monster with fists that stretch out and smack opponents from afar.

Again, it’s a big change in versatility from Farpoint, which was of course centered around the magnificent PSVR Aim Controller. It essentially had one weapon with different firing modes, but it gave aiming in VR tangible weight and authenticity. In comparison, miming holding two-handed rifles with Touch controllers has never felt quite as convincing. That’s why Impulse Gear wants to put its own spin on it. “When it comes to two-handed weapons, most games have this swivel thing,” Luisi explains. “We didn’t want to take it that far because I feel like it detracts from it. Unless you hold your hands perfectly straight, there’s no connection. That’s the beauty of the Aim controller, it’s a solid piece.”

Instead two-handed weapons will be more about affecting recoil and sway, and they also serve a function – in some cases gripping a weapon with your other hand will activate its special ability. Maps, too, are obviously very different from those methodical trails from Farpoint’s campaign. This time around you will need to use snap turn or, of course, physically turn yourself.

“The maps in Larcenauts are not designed around tight corridors,” Koreman says, “they’re these big enough spaces that you can get a big enough encounter to support the 6v6 gameplay […] so I think you look at the map design not at all like Farpoint, where Farpoint was very linear looking at these small turns. We’ve moved away from that, I think you need to move away from that when you’re coming into a big multiplayer game like this.”

Less of the linear corridors, then, but Luisi says they’re still designed to reduce the need for 180-degree spins and unnecessary twisting. Cover will play a part in combat but, with this being a faster-paced game, don’t expect to be rooted down to one spot and leaning out at all times like you would in, say, Firewall or Onward.

There’s one final key difference to talk about, though, and that’s narrative and tone. Larcenauts’ spritely, jokey opening trailer clearly echoes Overwatch, a game that has established its own personality and, along with it, ever-expanding lore for each of its characters. You can expect a similar approach here: “This is very much a team-based shooter,” Koreman sayd, “we’re not layering in an immediate story in that sense. But the world itself is full of narrative, and each one of these characters has a long, rich backstory, and we will be evolving that over time.”

Of course, Larcenauts as a whole is planned to evolve too. There are plans for post-launch support, of course, but Koreman is also very direct about eSports ambitions: “This is a competitive game, very much so.”

For everything that separates Larcenauts from Farpoint, though, the two share a key core mission; to push VR shooters forward. “Both Seth and I are huge core game fans,” Koreman says. “We look at this core shooter genre as something that I’ve played for my whole life, Seth’s made these games as he was saying. We really like that genre and this new VR medium. Those two things together make perfect sense.

“Early on there were challenges and, yeah, looking at how to overcome those challenges and how to bring that kind of game to VR is something we’re really passionate about, and we keep reinventing things on that front.”

Larcenauts is due for release on Oculus Quest and PC VR headsets this Summer. We’ll have plenty more coverage for the game as part of our Upload Access spotlight this month. Check out the full schedule of what’s to come below.