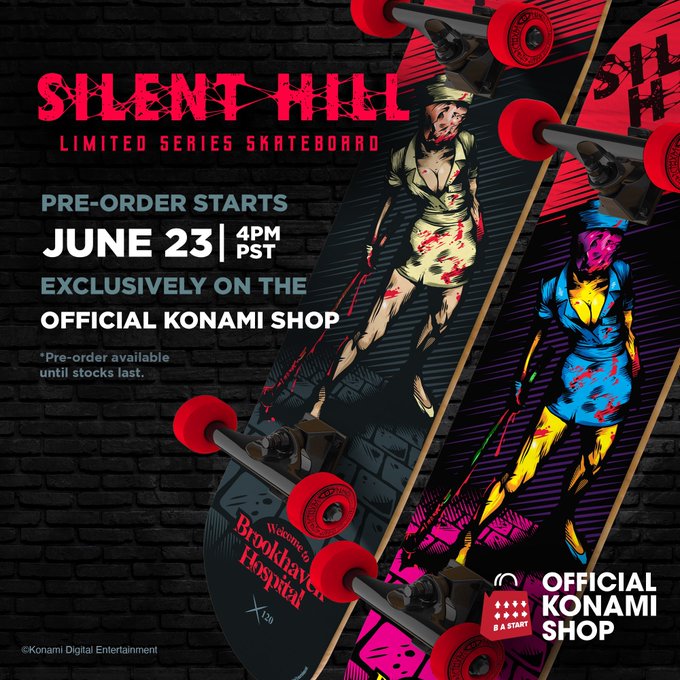 At this point it’s beginning to feel like Konami are straight up trolling fans, as they do everything possible not to create new entries in their most famous franchises.

Castlevania is now on its fourth series on Netflix, but there’s still no new game; they have started reviving old franchises, but only the obscure GetsuFumaDen; and while they’ve never announced a new Silent Hill they do keep profiting from the name, including pachinko games and now… a skateboard.

The limited edition skateboard features a nurse from Silent Hill (with really bad artwork that looks nothing like the game) and is apparently merely the vanguard of more merch, including T-shirts and cushions.

Although it’s tempting to imagine this is a prelude to a new game announcement fans have been down that road before, and it’s only led to disappointment.

All last year there were insistent rumours of a new game, possibly a remake co-developed by Sony, but that came to nothing, as did talk of other Konami revivals such as Metal Gear and Castlevania.

The one hope fans have, beyond the skateboards leading to something, is that Konami were scheduled to take part in E3 2021 but pulled out a month beforehand.

That implies that Konami is working on something other than Pro Evolution Soccer and at the time they did say they were in ‘deep development on a number of key projects’.

If it were any other company that would definitely seem to imply a new Silent Hill is imminent but given the track record of disappointment from Konami it’s best not to assume anything until there’s an official announcement.

They showed off more in the newsletter pic.twitter.com/FWfDUS0cGg