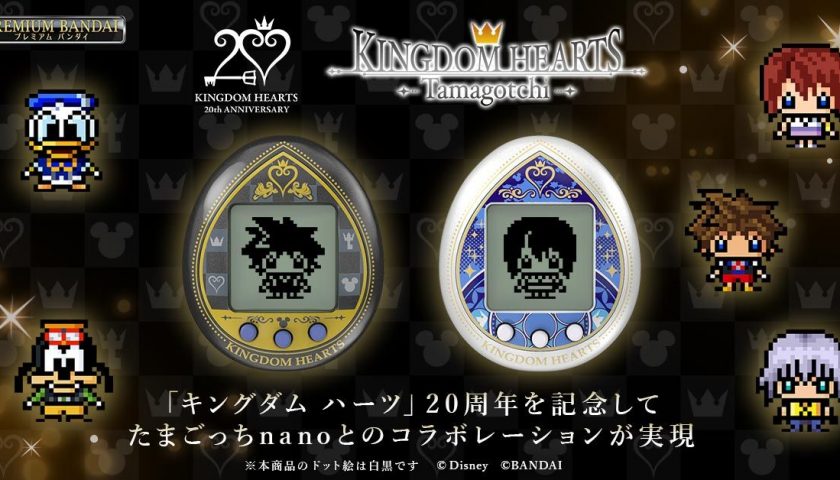 It may be more than twenty years since the Tamagotchi's heyday, which is when the Japanese gadget exploded in popularity in school playgrounds around the world, but it's not like they ever went away. Since it's the 20th anniversary of Kingdom Hearts, in Japan, maybe it's time to get back into keeping virtual pets alive with these special edition Kingdom Hearts Tamagotchi.

These "Egg Watches" (the translation for Tamagotchi) were originally released by Bandai in November 1996 in Japan and quickly became a huge toy fad, selling tens of millions of units since their appearance all over the world. They've come in all sorts of shapes and sizes, with hundreds if not thousands of different versions. Now Kingdom Hearts is adding its own spin on the gadget to celebrate its two decades since first launching.

The Kingdom Hearts Tamagotchi are coming in two different versions: a light mode and a dark mode. It's not just superficial differences either as owners of these special edition Tamagotchi can raise their own Kingdom Hearts characters such as Sora, Riku, Kairi, Donald, Goofy, and Aqua. All in all, there are 20 characters currently revealed, with the company deciding on the final inclusions as two additional characters are being voted on by fans.

The Kingdom Hearts Tamagotchi are going for about $20 each and pre-orders are being taken by Premium Bandai through to May 5, with orders shipping in October of this year. However, it looks like English versions of the gadgets aren't currently available, as they are not being sold on the company's English website. Those wanting to get their hands on these limited edition Tamagotchi will have to either import or buy from a reseller, or just hope a translated version of the item will be released further down the line.

In other news, Kingdom Hearts creator Tetsuya Nomura shared a first look at the 20th anniversary art for the series.