As far as the general franchise is concerned, Kingdom Hearts has a reputation for churning out super bosses from game to game that end up dominating quite a bit of fan discourse. Just look at any Kingdom Hearts III message board that’s active at the moment and you’ll see likely dozens of threads dedicating to discussing the Data Bosses Re:Mind added into the game. It’s been a long honored tradition of Kingdom Hearts to indulge in a secret boss or two, but it wasn’t always built into the series’ DNA believe it or not.

The original Japanese release of Kingdom Hearts was absolutely a finished and comprehensive RPG, but it was a bit light on both endgame and post-game content, something Square realized when localizing the game for international audiences. As a result, a number of secret bosses were added into Kingdom Hearts I to give the game some extra life.

Japan took notice, of course, and that led to the release of Final Mix which added yet another super boss and more or less put a definitive bow around Kingdom Hearts. Since then, not a game goes by without a super boss (with some exceptions, notably Chain of Memories.) As the first game in the series, taking a peak back at Kingdom Hearts I’s super bosses is a nice way of not only recognizing how the series has changed with time, but how super bosses were back in good ol’ 2002. 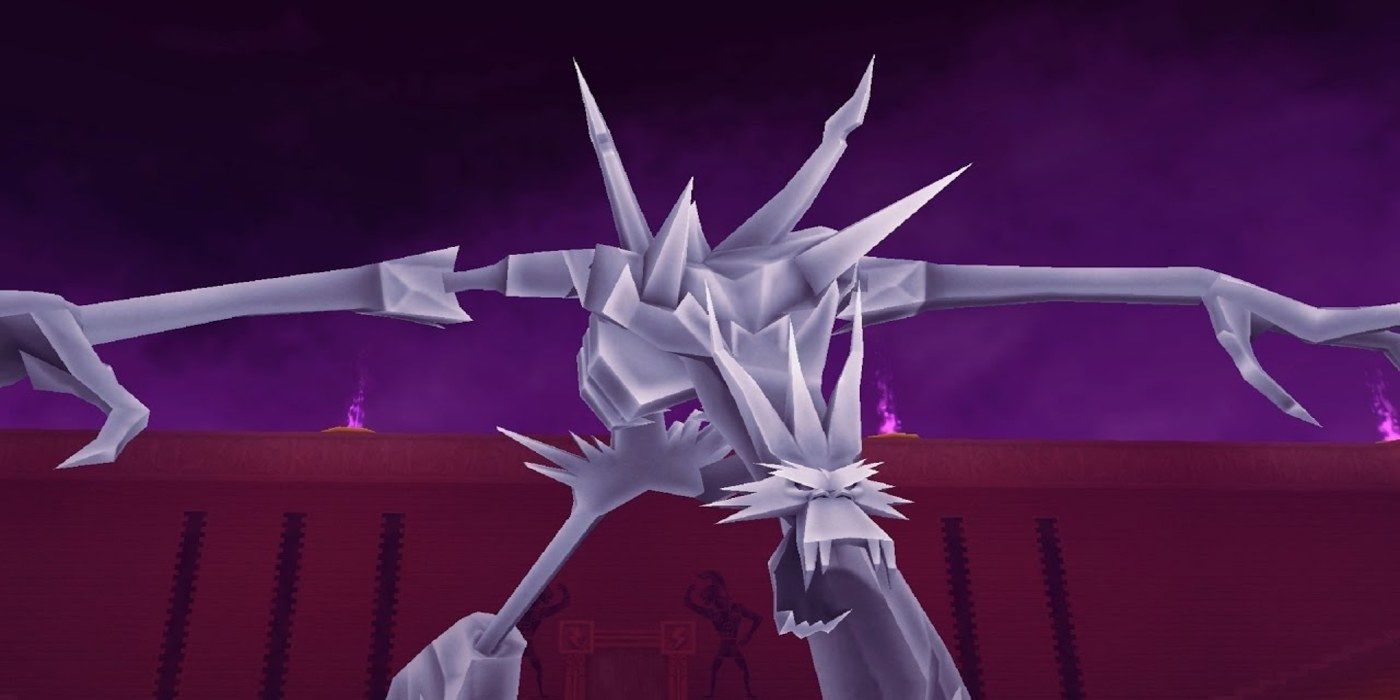 How difficult the Ice Titan ultimately is depends on whether or not you personally like to use Aero. If you’re someone who uses Aero at the start of every single boss fight, trying to take advantage of that extra defense, get ready to suffer. As soon as Sora casts Aero, the Ice Titan’s AI takes notice and retaliates in a way that genuinely feels quite unfair.

Typically, the Ice Titan will shoot out icicles at the player. They’re not too hard to dodge and deal with, but casting Aero causes the Ice Titan to start throwing out significantly larger and more damning icicles. These cannot be countered or blocked by any means either, essentially rendering your use of Aero null.

Thankfully, the Ice Titan is very weak to Fire, and Firaga will rip through his health. Not to an extreme degree, but it makes the fight easy enough so long as you don’t use Aero. All this said, the Ice Titan doesn’t quite result in that fun a fight. As far as the super bosses go, the Ice Titan isn’t very hard, but he isn’t very fun either. 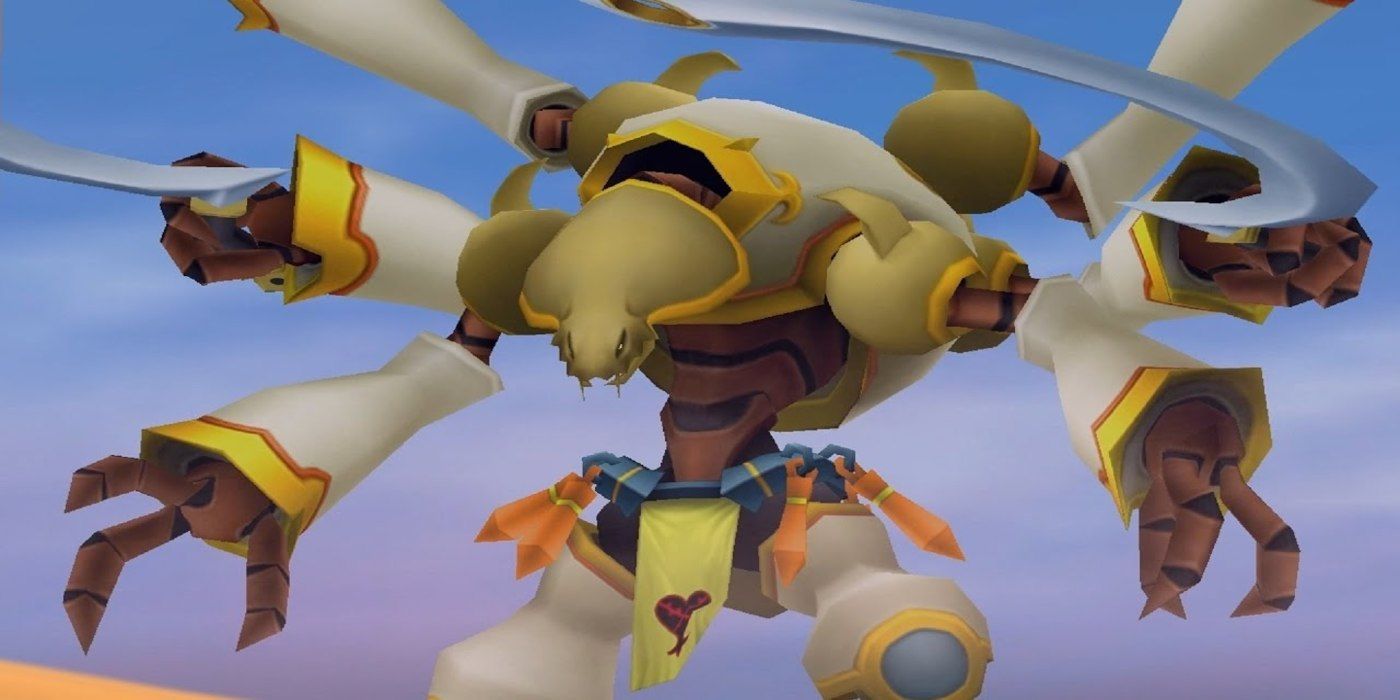 Ignoring the fact Kurt Zisa is named after some random New Yorker who won a contest (yes, really,) Kurt Zisa is one of the most imposing super bosses in the game. The longer this fight drags out, the worse it gets. Kurt Zisa lays out the punishment across three distinct phases, introducing new attacks along the way.

Part of the battle is just learning patterns. He’s a pain to survive against on the fly, but learning how to counter Kurt Zisa appropriately requires playing through the fight. It’s possible enough to brute force Kurt Zisa at max level, but that’s the case for most bosses. The only way to survive reliably is through old fashioned practice.

Unfortunately, Kurt Zisa isn’t that fun. He’s more frustrating than anything. If you know the fight, Kurt Zisa isn’t too bad on a replay, but this is not an enjoyable boss fight to learn, especially on Proud. Standard Kurt Zisa is a bit more forgiving. 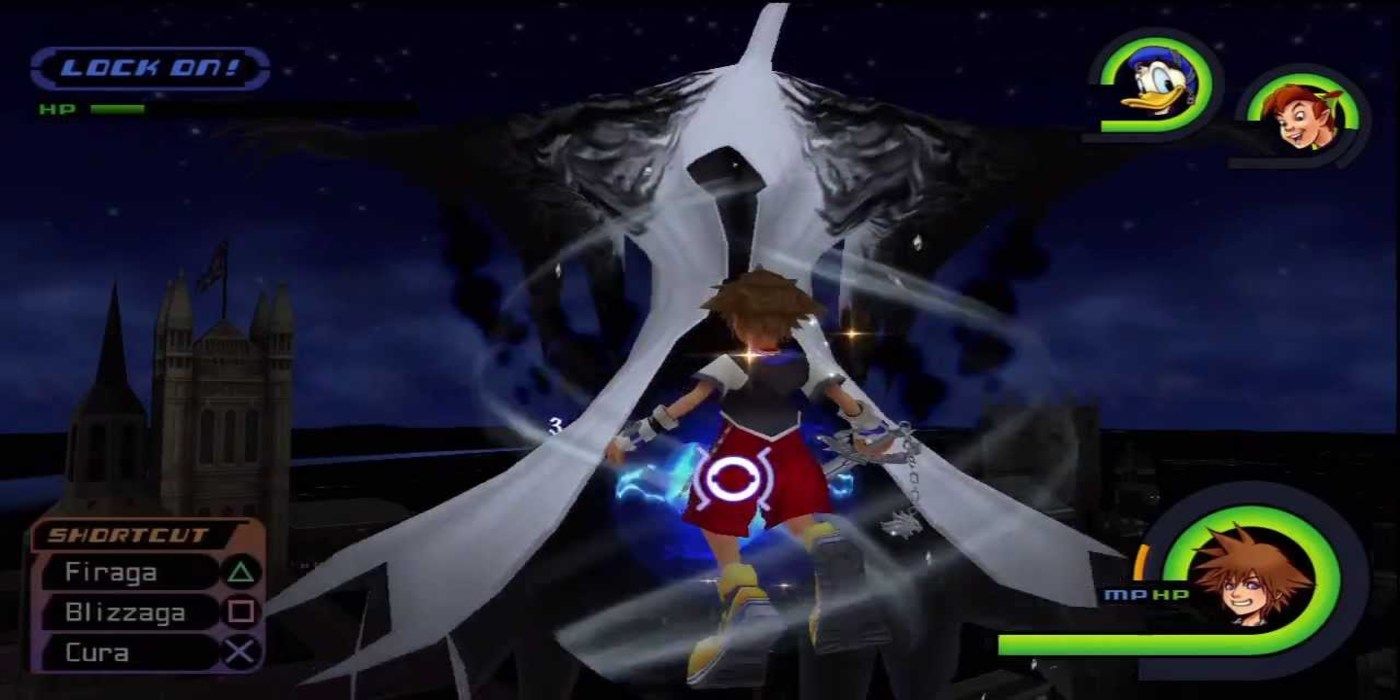 Here he is, the original super boss! Phantom is the only super boss in Kingdom Hearts I to have originated in the original Japanese. It’s interesting to think Neverland just had this random super strong boss hanging around after clearing it. It almost makes the presence of super bosses like Julius in Dream Drop Distance make a bit more sense.

Phantom’s not too hard of a fight, but he can catch players off guard rather easily. Fighting Phantom requires using Stop on the timer he casts on Sora, but many players seem to misinterpret this as a challenge to beat Phantom as fast as possible. In truth, the Phantom fight is meant to teach you to use Stop during combat.

With the clock frozen, players are given an opportunity to learn Phantom’s patterns. While intimidating, he’s far more forgiving than Kurt Zisa and less complex. His actions are discernable and make for a decent gameplay loop. Phantom’s not the hardest fight, but he’s fun enough for endgame content. 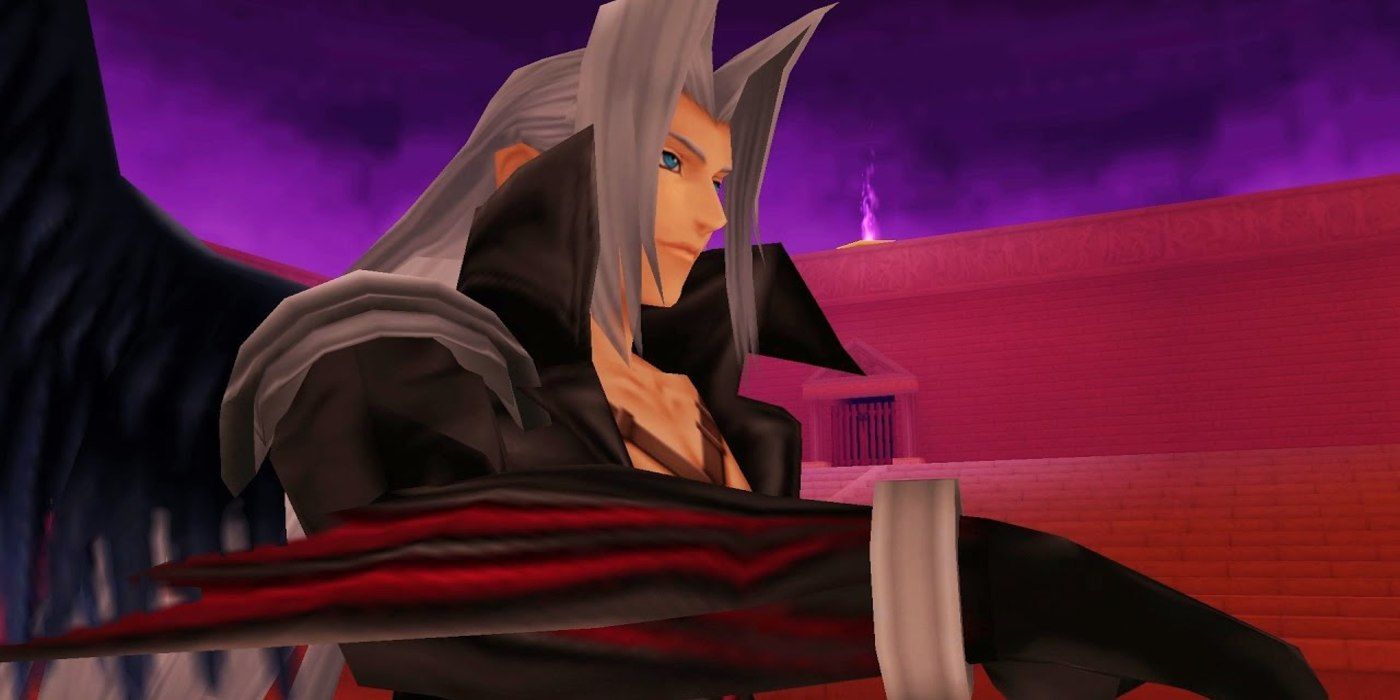 Everyone’s favorite super boss, Sephiroth pretty much challenges the player’s understanding of all the core mechanics. Mechanical mastery is pretty much necessary, as it equipping Sora with the right abilities. You need to know how to dodge, when to counter, and when to chain in and out of a combo. It’s a fun fight, if an intimidating one.

As was the case with Ice Titan and Kurt Zisa, Sephiroth was added to Kingdom Hearts’ original release (likely explaining why Sora canonically doesn’t recognize him in Kingdom Hearts II.) Sephiroth poses a fast, frantic fight that boils into chaos quite easily. His KHII counterpart doesn’t even compare to the fury Sephiroth brings in his first outing.

The best part is that the fight is a 1 on 1 battle in between Sora and Sephiroth in the game’s resident arena. Cool set pieces matter. 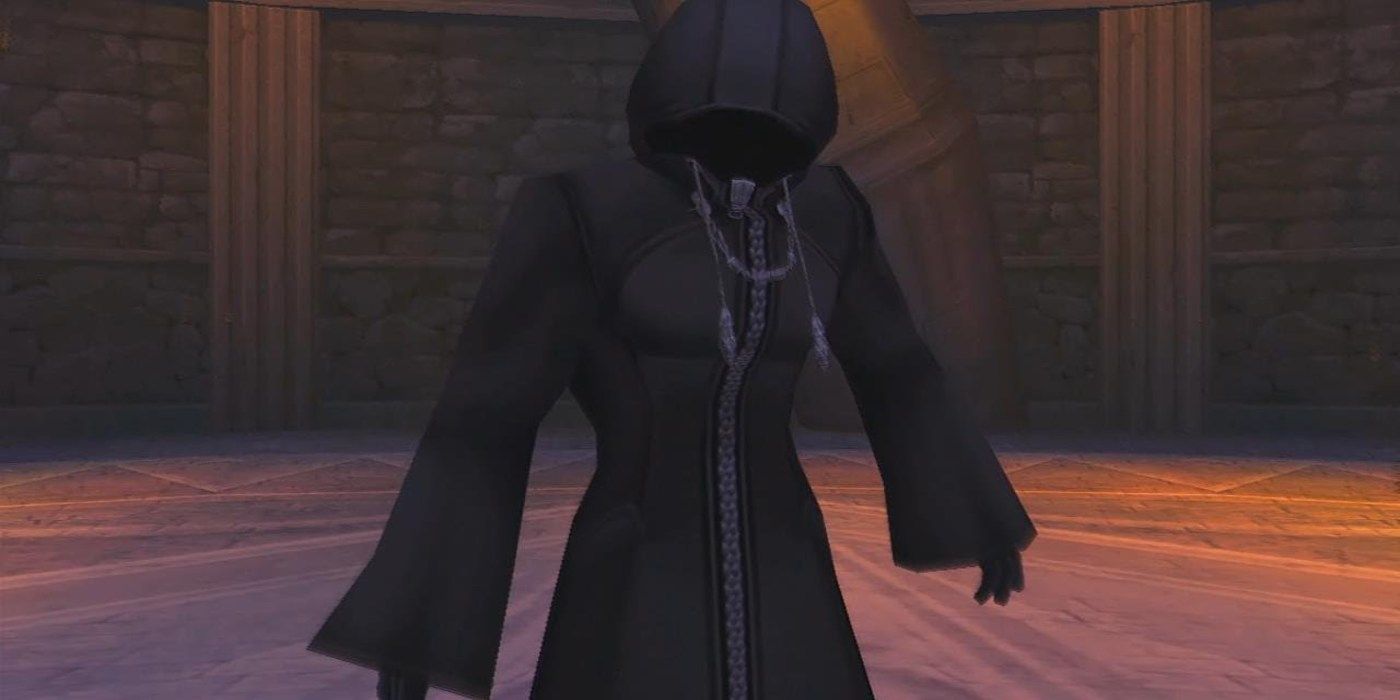 Speaking of cool set pieces, the fight against Unknown takes place in Hollow Bastion, the single best World in the game. He also happens to be the main villain of the second game and fights with two lightsabers. Just conceptually, this is probably the best fight in Kingdom Hearts I, second only to Riku-Ansem in Hollow Bastion.

Unknown is basically a better version of Sephiroth all along– a fight that takes advantage of all the mechanics rather than just the core combat ones. Party composition matters, Summons can pull their weight, and understanding how to control Sora with a master’s touch is a must. This is a fight that demands a max level, Ultima Weapon, and party members customized accordingly: a perfect test of your skills.