Believe it or not, Young Xehanort is one of the easiest data battles in Limit Cut, the new super boss mode in Kingdom Hearts III Re:Mind. His portal is the first you encounter on the left side of the room and likely the first challenge players will try.

Even though he’s one of the easier fights, players who have just completed Kingdom Hearts 3 on either Normal or Proud difficulty may be in for a bit of shock at just how difficult these Limit Cut fights are. Use this guide to get a handle on the fight and, once you understand the theory, practice, practice, practice.

You’re not going to be able to slide right into Limit Cut after finishing the story without some grinding. I finished both the base game and Re:Mind around level 45 and was getting absolutely housed by the Limit Cut bosses on Proud Mode. While there are those that manage to pull of level one crit runs with one hand behind their back, the rest of us need to be prepared.

First step is getting the right Keyblade. Assuming you haven’t gone through the process of getting the Ultima Weapon, your options are either Oathkeeper on Normal/Proud or Oblivion on Critical. All you need to do to get Oathkeeper is find all 90 of the Lucky Emblems scattered around the worlds. As for Oblivion, simply complete the game on Critical.

Once you’ve leveled the Oathkeeper up all the way, I recommend using the Royal Ribbon and 2 Cosmic Belt+. These three items will give you the highest defense and resistance combo possible. 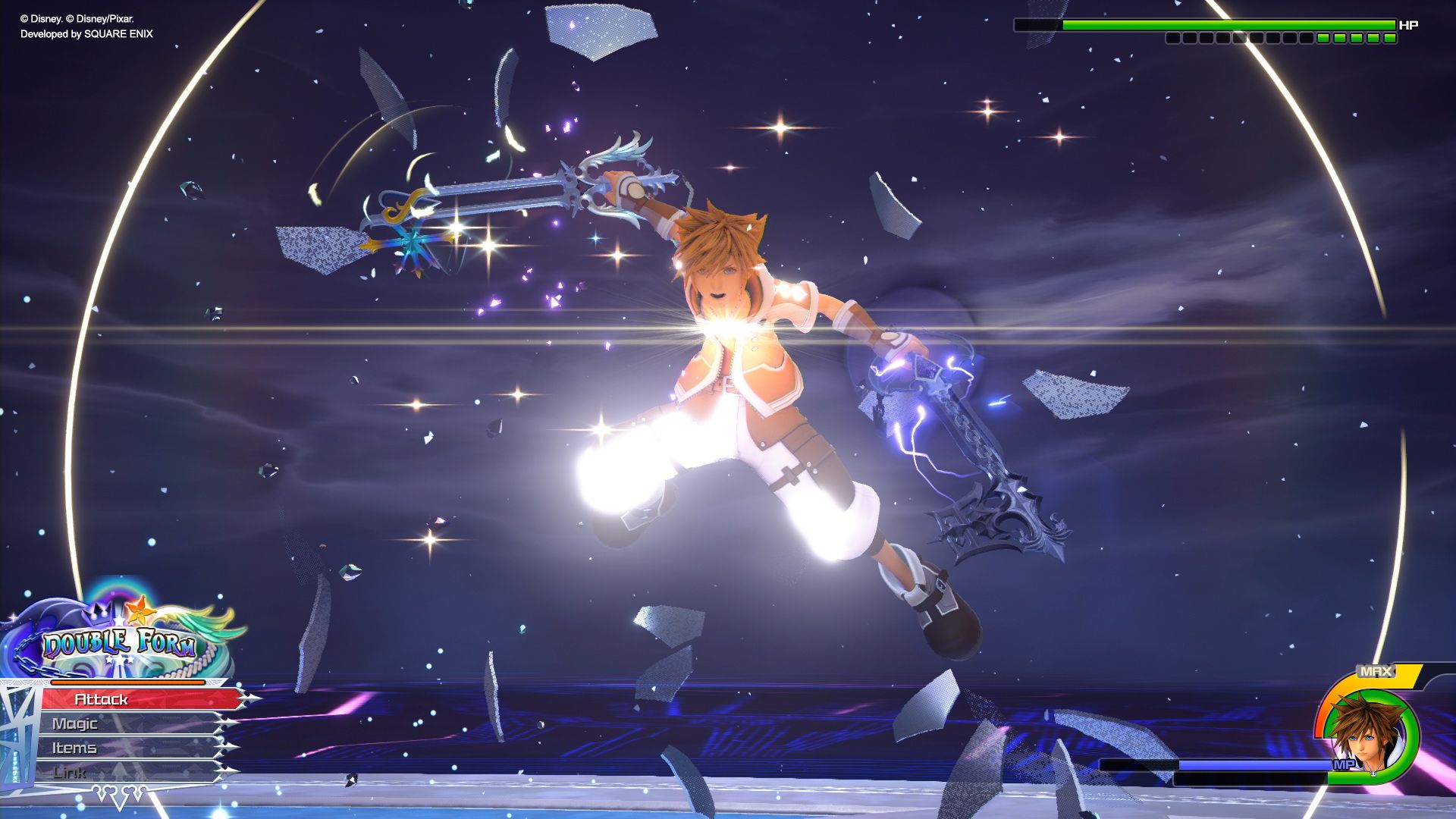 As for accessories, I like to use the Crystal Regalia from the Dark Inferno secret boss and the Mickey Clasp, again from the 90 Lucky Emblems, for the fastest MP regeneration. The third slot is more open to preference, Orichalcum Ring, Flanniversary Badge, and Celestriad are all good choices.

After that just make sure you have a Kupo Coin, lots of Hi-Potions and Hi-Ethers (or Elixirs if you’re boujee) and eat a high HP/defense meal.

Young Xehanort has a mix of short range and long range attacks that you should ideally respond to by either dodging or blocking before countering. His attacks are:

Teleporting Whip– This is a long range attack that can be either blocked or dodged. I recommend you dodge these attacks though, because one of his whip attacks can’t be blocked. Young Xehanort will teleport and whip three times. Keep rolling towards him and on the third whip unleash your combo. If he breaks out of the stun he will usually transition to: 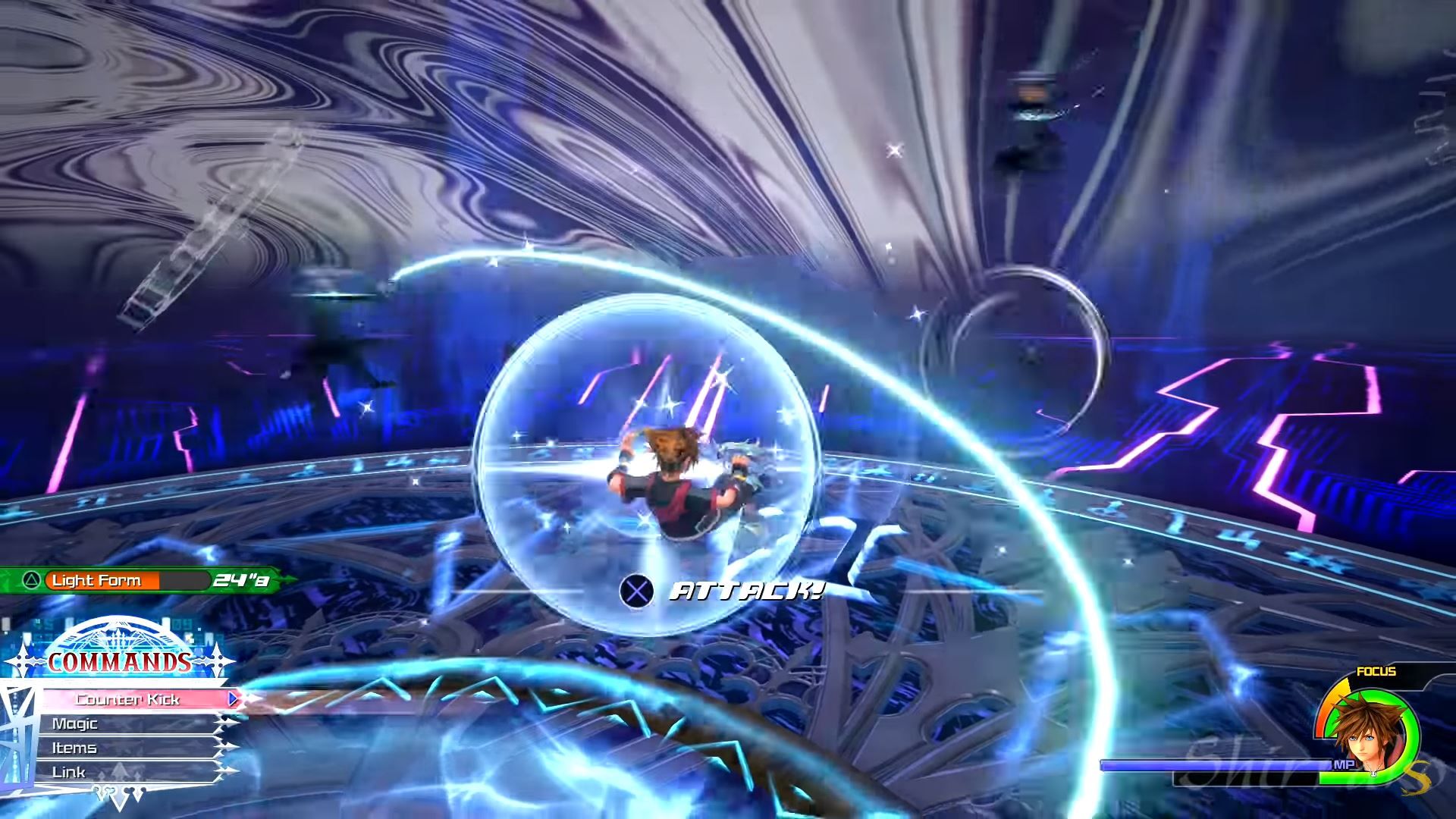 Teleporting Spin Attack- This is a close range attack you absolutely need to block. Again, he’ll teleport at you three times and on the third he’ll do a follow up slash. Block and counter attack every single one of these. If you miss the first one it can be hard to recover before the next.

Time Stop- A ring will appear on the floor and YZ will swing his whip. If he hits you you’ll be frozen in time and he’ll unleash a combo that will usually take you down to one HP. Dodge away from the circle and use a shotlock on him instead.

Ice Shards – He will fire two barrages of ice shards at you, block just before they come in a keep holding block through the entire barrage. On the second one he will move towards you and, as long as you timed the block correctly, you’ll catch his attack in your block and be able to counter him. 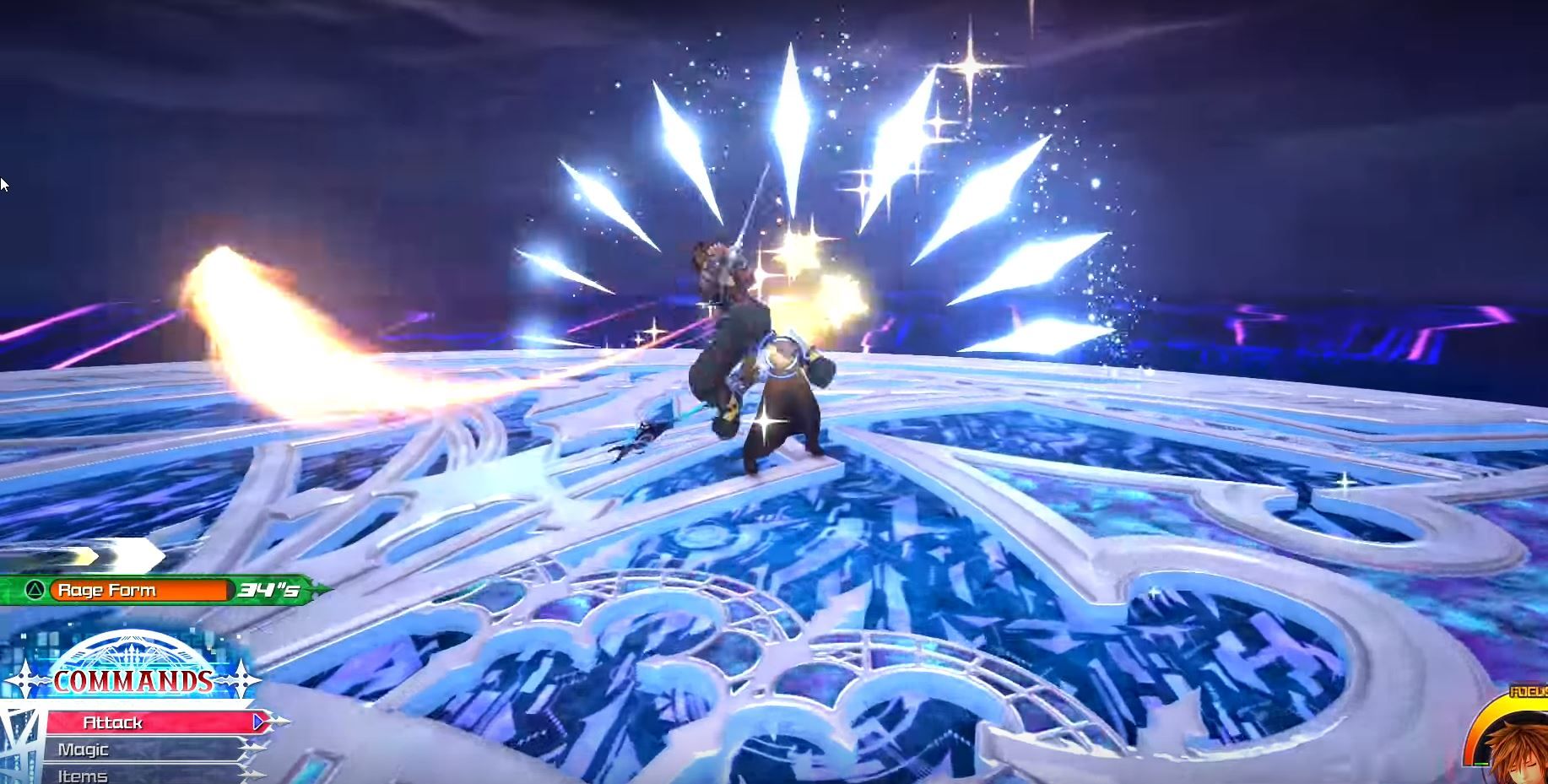 Power Up –  When Young Xehanort goes to the middle and the arena goes dark, he’ll gain an oversheild and start teleporting around rapidly. All you need to do is block and counter a couple of these attacks to break his overshield return the battlefield to normal.

Unlike the rest of Kingdom Hearts 3, you can’t just go ham on Young Xehanort, there’s no brute forcing this fight. Start by dodging his three whip attacks and then laying into him after the third. If you push him back to the edge he’ll often try to hit you with the time stop. Don’t commit so hard to your combo that you miss the obvious sign, (the circle on the floor) roll away and then continue your combo after or fire a shotlock at him.

When he teleports at you block and counter every single one. Don’t worry about waiting for the third attack to get a hit in, you can cancel out of your counter into another block, just keeping alternating between block and counter. The timing is important but you don’t need to be frame perfect here.

If you start to feel yourself, you can actually block the whip attacks and counter from range using the Counter Kick ability. Occasionally the dodge command will pop up, allowing you to teleport right behind him with the jump button. The window for these dodge counters is really tiny so don’t count on hitting these every time.

Countering the whip can help get you some combos in quickly. Throw in a spell like Firaga while you are going nuts on him to get your command meter up faster and get you into your second stage. This makes blocking much easier and gets you to dual wielding faster. This is where you’ll do your big damage.

If you have Withstand Combo and Second Chance on, you never have to heal until he puts you to one. Don’t panic and heal early because you may miss you attack opening. You can play a little looser while you’re still holding your Kupo Coin, so let that health go to one before you heal. If your MP is still recharging, use the Rage Form. Rage Form is pretty bad at blocking, so I recommend as soon as your MP refills you dump out of it by mashing the finish command button and heal.

Your best opportunity to use an item is after dodging the time stop circle. Topping off your HP in this window isn’t a bad idea, but you can also get a lot of damage in with a shotlock here.

It only gets harder from here, so take your time on Young Xehanort and learn how to block. There’s a good chance you never had to really use it before this fight!