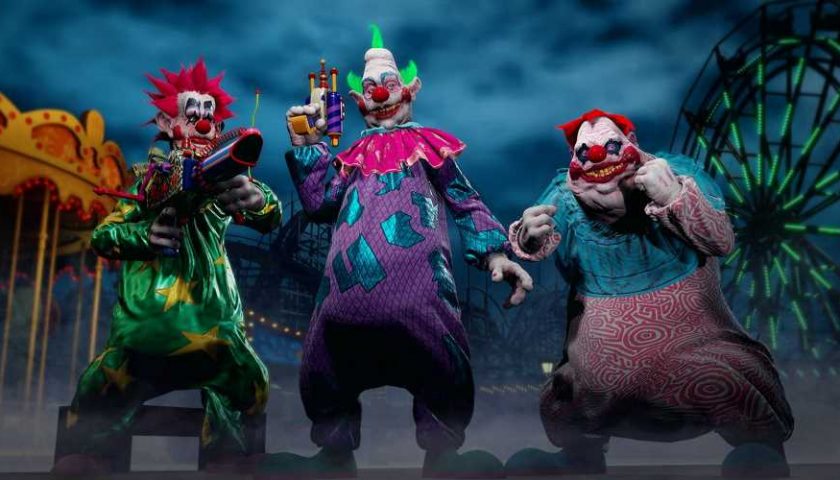 Killer Klowns From Outer Space: The Game is looking a lot like the 1988 cult classic film, according to the latest trailer released from Teravision Games.

Announced back in August, Killer Klowns From Outer Space: The Game will be an asymmetric multiplayer survival game where seven humans attempt to defeat three Klowns. The first trailer confirmed it'll be set in the 1980s–just like the film–while today's trailer confirms that the game will be true to the movie in almost every way.

From Officer Mooney’s police station to the Big Top spaceship (which is apparently the name of the Klown's vessel), everything in Killer Klowns From Outer Space: The Game is being made to be as authentic to the original source as possible.

"The team wanted to bring you back to this era and infuse love into every pixel," wrote Teravision Games in today's blog update. "That’s why fidelity and authenticity are in every moment of your Crescent Cove experience."

The game's color palette and lighting are inspired by "Panavision cameras and the Kodak 35mm Eastman films," and character models are ripped straight out of the movie. Teravision said it was "hella complicated" to make those Klowns without humans ambulating in oversized suits, but they've managed to recreate their lumbering gate without proper mocap.

Today's trailer also may have given us a few hints about Killer Klown's gameplay. At one point, the trailer shows a scene from the 1988 film where the Klowns create a living balloon dog to track down more humans to turn into cotton candy. In the blog entry, Teravision also mentions how humans can infiltrate the Big Top to "go after the core" and put an end to the invasion once and for all.

"This is just a taste of the lengths we went to [in order to] keep our conceptual compass facing towards the IP we’re all so passionate about," added Teravision. "Enjoy this B-movie aesthetic that puts you into an absurdly terror-filled match, or one that’s a playful murderous rampage hunting your favorite snack."

Killer Klowns From Outer Space: The Game is scheduled to arrive sometime in 2023 for PlayStation, Xbox, and PC.