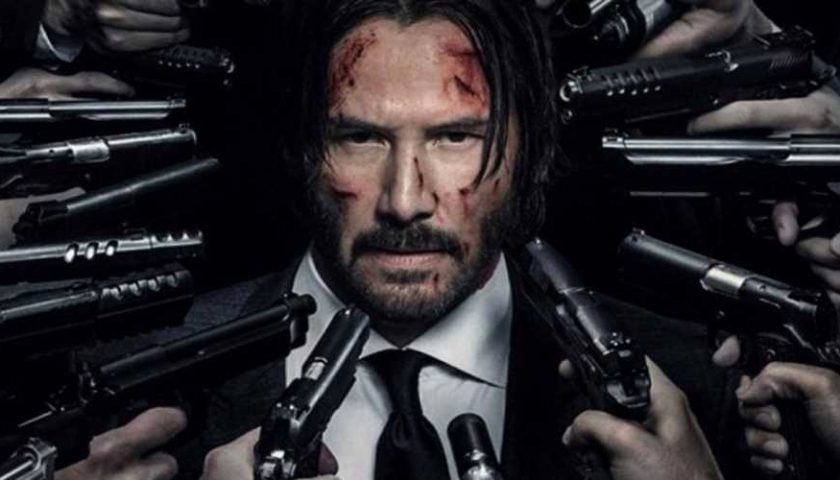 John Wick: Chapter 4 has fallen victim to yet another delay. Lionsgate announced that the next chapter in Keanu Reeve's vindictive novel of pencil-pushing will be released in March 2023 now.

The studio broke the news of the delay in the most hilarious, albeit slightly depressing, teaser video featuring the film series' switchboard operators. They wrote John Wick: Chapter 4's new release date on the chalkboard and on the computer, ending with the greeting "Be seeing you," as cherry blossom tree leaves fell in the background.

This news comes at the same time as The Matrix Resurrections' own release, another action film with Keanu kicking in skulls, this time as he reprises his iconic role as Neo. Ironically, John Wick: Chapter 4 was set to premiere on the same day as The Matrix Resurrections — May 21, 2021 — but the production schedule changes wrought by COVID-19 forced the latter film's release date to get pushed back by seven months, not to mention Reeves' commitments to The Matrix.

Meanwhile, John Wick: Chapter 4 started filming in June and wrapped up in October, putting it on track for the May 27, 2022 release. Now the film's release has been delayed a second time because of a new wave of COVID-19 cases brought on by the Omicron variant.

The new film will reportedly be titled John Wick: Chapter 4 – Hagakure based on the photos stunt performer Tsvetolyub Ileiv shared on Instagram last month. Reeves might be too generous for his own good because he revealed the title as Hagakure with a set wrap gift.

The title for John Wick: Chapter 3, Parabellum, originated from the Latin phrase, "If you want peace, then prepare for war." Hagakure comes from the Japanese phrases, "In the shadow of leaves" or "Hidden leaves." It's also the title of a book written in 1716 by Edo period samurai warrior Yamamoto Tsunetomo, who wrote about the teachings of Bushido, a moral code of ethics samurai warriors of that time period had to abide by. Hence Laurence Fishburne, who plays the Bowery King, telling Collider that John Wick: Chapter 4 "is much deeper in terms of the code of the assassin."