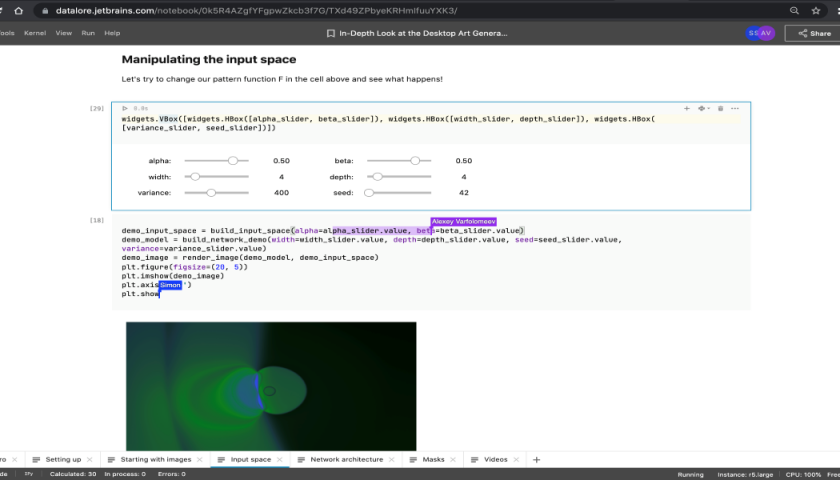 Software development company JetBrains announced it has made available an on-premises edition of Datalore, a platform that enables data scientists to collaborate around shared instances of a Jupyter Notebook.

Previously, Datalore was only available to a single user via a cloud service provided by JetBrains. Now data science teams that work, for example, in highly regulated environments that are not allowed to employ cloud services can host the platform themselves, said Dmitry Trofimov, project lead for Datalore at JetBrains. Datalore for Enterprise is priced at $125 per user per month.

Based on an open source format, Jupyter Notebooks are documents that combine live runnable code with text that describes an AI model, equations, images, interactive visualizations, and other output. Widely employed by data scientists, Jupyter Notebooks are packaged with JetBrains’ collaboration tools that make it easier to share documents across a team of data scientists.

Datalore also provides access to an integrated development environment (IDE) that includes smart coding assistance tools that automatically complete code as data scientists and analysts write in the Python programming language, for one example. The IDE also allows data scientists to collect and explore data, create machine learning and deep learning models, visualize results, and then share them with other members of a team. The Datalore cloud service adds the ability to prototype an AI model more easily using cloud-based infrastructure.

As AI goes mainstream, the building of applications is becoming more of a team sport that requires developers and data scientists to collaborate. In some cases, data scientists are also starting to learn how to code as part of an effort to become less dependent on developers, noted Trofimov. “The situation is changing,” he said.

Regardless of how the convergence of AI model and application development is achieved, it’s clear that Jupyter Notebooks are becoming the means through which much of that collaboration is being enabled. The challenge JetBrains and other service providers face is the strong preference for open source tools that data scientists often deploy and manage themselves. JetBrains and others, however, are betting that as pressure to accelerate the building and updating of AI models increases, more organizations will opt to either deploy a platform for building AI models internally or leverage a cloud service.

Data scientists are not only hard to find and retain these days, but they also typically only build a few AI models per year that make it into a production environment. Business and IT leaders that are betting heavily on AI to drive digital business transformation initiatives are now paying a lot more attention to data scientist productivity. In effect, every organization that builds and deploys software today is engaged in an AI arms race with rivals that are making similar investments.

Of course, hiring data scientists and investing in platforms to build AI models is no guarantee of success. There is no correlation between the number of data scientists employed and the ability of an organization to successfully automate a process using AI. Success tends to relate more to the level of insight data scientists can bring to bear on business process they are seeking to automate. Too many data scientists don’t spend enough time engaging the people that manage a process to better understand all the rules and exceptions that inevitably pervade a process. Conversely, a new generation of business executives will inevitably need to become familiar with Jupyter Notebooks to better understand how data science is being applied to those processes.

In the meantime, the greater the appreciation there is for AI as a team sport within organizations, the more likely it becomes there will be an actual return on that AI investment.