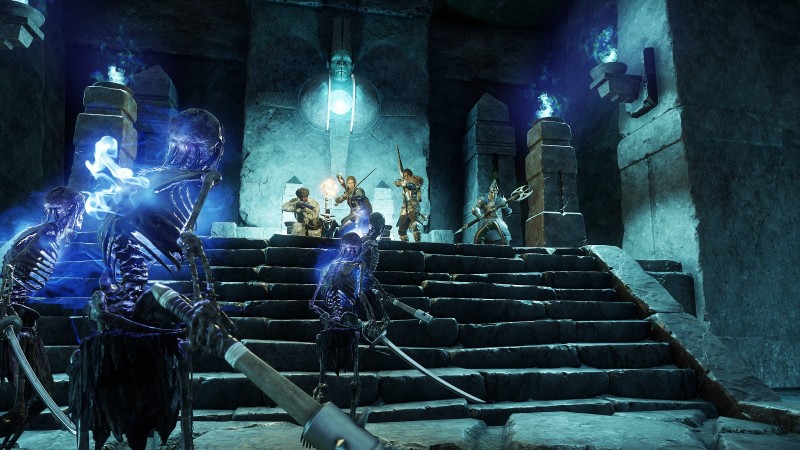 New World taps into older MMORPG conventions to create something that feels new today, a stark contrast to other genre titles that ferry players through a linear and unified experience. Instead, New World challenges players to forge their path in player vs. player territory control, extensive crafting and gathering, and standard questing monster hunting. New World excels in the crafting and gathering department, with incredibly satisfying and meaningful progression to make your gear and help out your friends that may specialize in other crafts than yourself.

Want to do it all? You can. With New World’s skill system, you only need one character that can learn to do anything and everything, given enough time and resources. Putting the finishing touches on your first masterful craft feels fantastic. The player-driven economy also feels lovely, as unloading your bags back at your homestead for a few coins fuels the engine further. While the traditional monster mashing and questing are beyond mundane here, the other aspects of the game – crafting, gathering, progression of all kinds, and social focus – make the game feel compelling and exceptional today, even if these concepts were popular years ago on the MMO scene.

What is New World, anyway? It’s a low-fantasy MMORPG that’s skill-based. I don’t mean that you need to be good to play it, but rather that you get better at what you do, similar to something like Skyrim. Runescape is probably the go-to title to describe the crafting mechanisms that run behind New World. Players become experts by doing, not through traditional level-ups. Hit a rock, and you get better at hitting rocks and can mine better rocks. Chopping trees, harvesting plants, fishing; whatever you want to do, every pursuit is worth becoming great at. Of course, with your packs full of raw materials, it’s time to turn them into processed goods. I was somewhat skeptical that the hooks here would last, but 80 hours into a crafting and gathering focus, I’m still stopping to harvest everything in sight. New World taps into the “numbers go up” dopamine hit as few games can. In fact, there’s no need to do much fighting in New World if this is your focus – you gain excellent experience from honing your craft, and the majority of my experience points have come from becoming skilled in my crafting efforts. Skinning your first few wolves may not get you invested, but once you have some powerful gathering tools (that you made yourself, rolling incredible modifiers on) and taking on bears for huge swathes of leather and fur, you’ll start to see just how enchanting crafting can be.

These systems all feed into one another, encouraging players to dip their toes into a multitude of crafting pursuits. A flint pickaxe isn’t exciting. A starmetal pickaxe that you handcrafted with a bevy of modifiers and can shred through resource nodes in moments makes resource running a zen-like experience. Making excellent gear for yourself and your friends, whether that’s a mighty pouch to hold more as you wander the world or a magnanimous musket, feels great. If you enjoy crafting and gathering, New World is an absolute slam dunk in this department, with systems that make your time and experience feel meaningful as you progress up the levels and zones. The fantasy of living off the land and forging your path to greatness is often explored in survival games, but New World takes the concept and turns it into an MMORPG bonanza that is incredibly enjoyable.

Let’s talk about another game. Dark Age of Camelot is probably the gold standard in the MMORPG world for coordinated territorial player-vs-player “realm vs. realm” pursuits. Still, many gamers today probably weren’t around when it was a big deal. There are three factions in New World, and they battle over territory constantly, culminating in instanced 50v50 wars for town takeovers. While my first war experience was fairly intense, the small-scale skirmishes that happen in the minute-to-minute gameplay are still the best part of PVP here. A note, you must be flagged for PVP to participate, so all PVP is consensual and opt-in. Taking on a small group of players while you’re out harvesting 1000 linen can be more exciting than you think, with musket balls and hatchets flying everywhere as you try to take out a player and make a strategic retreat to a treeline. Yes, PVP can devolve into a numbers game zerg fest out in the open world, but if things get too heated, you can easily turn your PVP flag off in town and go about your business. After all, those trees aren’t going to chop themselves down. These experiences are, like many others in New World, better with a friend or two. Whether or not you decide to shack up with a big company, you’re going to play a part in the territory war on your server. Though, like crafting and gathering, your level of engagement with this aspect of the game is up to you.

This is probably the right time to talk about another element of the game that’s also rarer in today’s MMORPG scene. Social aspects. Yes, you’re going to have to talk to other players to form dungeon groups. Yes, there is a global chat where you can spout anything and everything. Yes, big companies (guilds) are bound to have tons and tons of drama. I was in a World of Warcraft guild that saw lives ravaged by divorces and deceit – all fueled and looped into in-game activities. When you open your game up to social experiences, not everyone is going to talk about the fish they’re catching or the weather, and you also might be thrust into various scenarios with lots of screaming, posturing, and inane blather. Of course, you can turn to chat off in-game and not hop on Discord to participate in other activities, so some of this is opt-in, but overall it is an aspect of the game that feels refreshing.

Obviously, no one wants to hear someone’s horrible hate on other players, but actual player-to-player communication has been overly sterilized in MMORPGs and online gaming in general. Well, now’s your chance to be a little chatter bug again, and it feels pretty damn good. Make something cool? Show it off in chat or sell it! Make friends with a tank from the other faction to get a dungeon done. Maybe if you see that person later in the world in a PVP scenario, head in full view of a primed sniper shot, you’ll stay your hand and slink off in the bushes unnoticed instead. I did. After all, he was a good tank, even if he is in that nasty guild that we’re fighting every day.  In an online gaming world where many communication tools have been systemically removed to prevent harassment and promote safety, it almost feels like a radical act promoting and encouraging open dialogue between players – and it feels kind of nice to have a social interaction inside a game world again. Problem players are ostensibly dealt with via a report system, which is easy to use.

So, traditional player vs. environment, or killing ghosts and bears and all that, is probably the weakest element of New World. Traditional dungeons and public quest portal battles offer some variance outside of taking out hordes of boring foes, but none of the standard enemy battles stand out compared to experiences offered by other MMOs today. Enemies are rather uninteresting, and you’ll be battling the same skeletons and zombies for many of your days. The first time you see a giant crocodile is pretty cool, sure, but eventually, your mind realizes that that big critter is just a vessel for leather supplies.

I’ll be as clear as I can here. If you want to play a game with good questing and monster battling, this isn’t the game. Almost every quest is uninspired fetch or “kill ten rats” fare. While the other elements of the game make this entirely forgivable for me, it’s essential to know that you will probably not have a satisfying traditional PVE experience here.

While criticism of the lack of enemy variety and their rather generic nature is warranted, New World has some beautiful scenery that weaves its way well into the whole experience of traveling this dangerous land. Surprisingly, one element that stands out is each territory’s environmental design. Rooted in reality in terms of flora and fauna, it can be challenging to create defined areas that have their look and feel, but New World pulls it off here, with zones ranging from the prosperous and pastoral new player areas to sunken swamps and haunted hills. After a while, you can tell which territory you’re in just by the aesthetics, which is pretty cool. The environments are gorgeous, with day/night cycles creating some incredible picturesque moments under the stars.

And, if for some reason, you’re stepping into a player-centric MMORPG for a story, you’re not going to get anything interesting there either. Games with player economies, open-world PVP, and territory battles often tell their tales in the moment-to-moment player experience, and New World is no different. It’s the legendary fish you catch and show off to your guildmates. It’s the 8-hour battle for a fort that creates a permanent rivalry between two companies and the way the server has to live with that constant conflict. And sometimes, it’s just a quaint moment in the woods where you slaughter a turkey to cook it up later. The story is being told in every action you take and participate in, but it’s not a traditional narrative that adds up to anything worth engaging with. Lore does exist, but it’s often attached to notes and ledgers that are not really convenient or fun to read.

New World takes an amalgamation of features and mechanics from MMOs of yesteryear and packages them up in a way that feels new today. While it’s a bit of a Frankenstein monster in terms of the various directions a player can go, the almost unfettered freedom is unbelievably welcoming in a world where MMO experiences have become more and more linear. If you like crafting and gathering with chunky progression systems, New World is a must-play. If you have a few friends (or a lot of them) and you love player-vs-player server conflict and a bit of drama, New World is a must-play. If you want a great story or interesting quests, New World is not your game. If you are an old-school MMO player who has bemoaned the genre’s direction in the last 15 years, New World is a must-play. Now, if you’ll excuse me, there’s starmetal to mine, and I’m almost ready to craft a new bag.