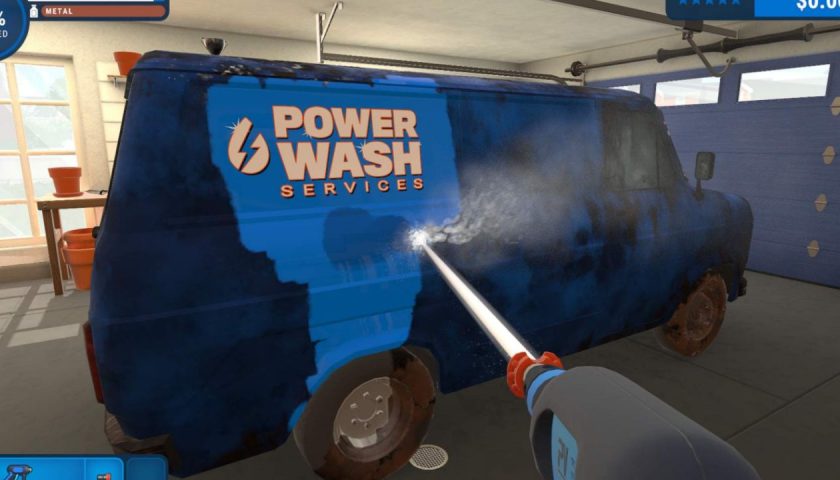 Cleaning up messes is one of the major pitfalls of being human, and from the stacks of used mugs in my kitchen to the neglected piles of clothes in my room, it’s safe to say I’m not particularly good at it either. Yet regardless of my cleaning incapability, FuturLab’s PowerWash Simulator grabbed my attention and wouldn’t let me go until I had exhumed all the grime and secrets hidden within. Set in the vaguely American town of Muckingham, you play as a new business owner and cleaning aficionado working their way up the economic food chain, power washer in hand. Your work begins with a humble garage and garden, but soon grows to encompass endless deserts, volcanic activity, and woods home to mythical behemoths.

Washing away the surface dirt, it’s clear from early on that the team at Futurlab had no intention of letting players clean in peace. Through well-timed text messages from fictional residents and clever environmental storytelling, PowerWash Simulator’s unlikely narrative is a digital gumshoe’s dream.

“It seemed a natural fit to include environmental storytelling to complement the story and help with world-building,” lead designer Dan Chequer tells me. “As jobs involved the player staying in quite small locations for protracted periods of time, we knew from the start that we had a wonderful opportunity to hide things under the dirt and around the environment for the player to find.” 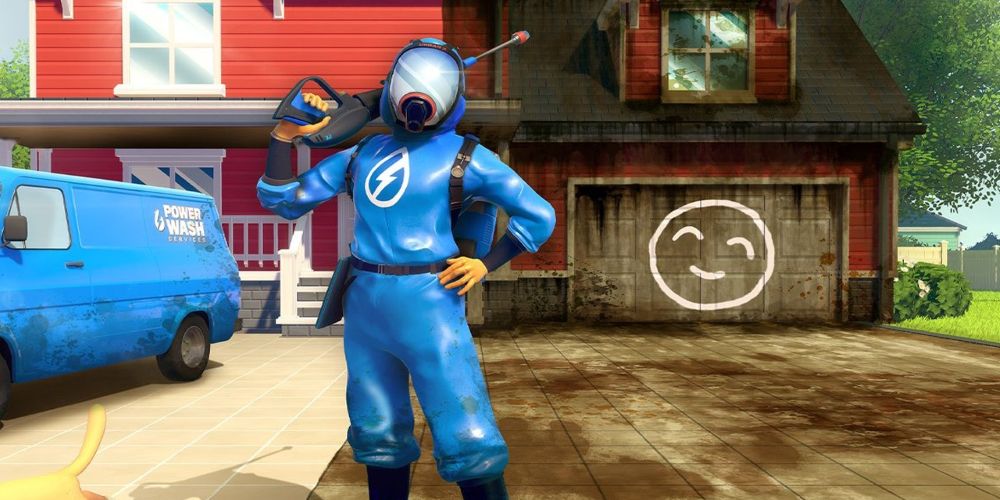 A great example is the scattered cat pawprints players can find in specific jobs. To accompany the visual motif, we learn early on that the mayor’s cat is missing, and this is referenced throughout the narrative by other Muckingham locals. As you consistently encounter the pesky paws, you can’t help but think, ‘what happened to that darn cat?’. Many of the game’s narrative details came organically to FuturLab during development. “We knew that we would be moving from location to location during the career mode, so it seemed fitting to have a story to accompany this journey,” Chequer says. “For example, the first job is to clean the player’s van, and it seemed like a nice touch to have that van in each scene, so we made sure to place it on the road outside each job. We then realised that we could use vehicles to personify other characters, so there are occasionally vehicles that were previously cleaned and parked up, hinting that their owner is present in the scene.”

FuturLab also wanted something consistent in the background of levels for players to identify as they progressed, so the volcano was born. Seen from a distance in almost every job, this ominous feature explains the origins of at least some of the town’s muck and is consistently referenced throughout the campaign. The strong but subtle narrative threads between PowerWash Simulator’s jobs ties together the game’s setting. It’s hard not to feel like a true Muckingham-ian when cleaning someone's parents' retirement home or an adventure-worn RV in need of some TLC. This grounding in suburban reality, accompanied by the surreal, otherworldy elements, works to make later jobs like spaceships and ancient statues feel more reasonable. It’s a Lynchian mix of the mythical and the mundane. 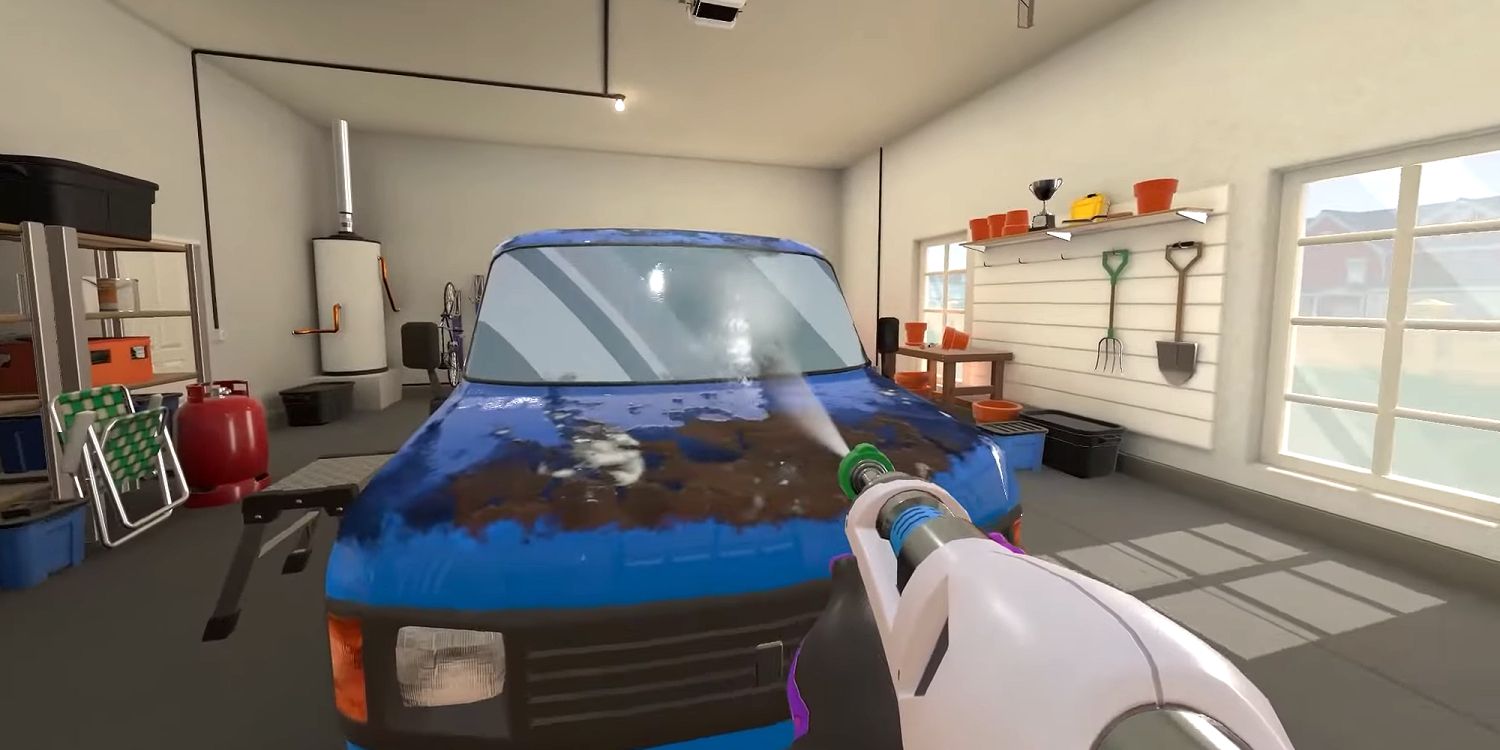 This unique approach to building narrative mythos is exhibited when you’re suddenly whisked away from suburbia and tasked with cleaning a Bigfoot investigator’s treehouse. It seems like an innocuous joke until you stumble upon alarmingly large footprints that the clumsy cryptozoologist hadn’t noticed. This intentional shift towards the absurd is almost eerie at first, but it somehow feels comfortable within the narrative framework thanks to FuturLab’s unusual but compelling approach to environmental storytelling.

Early in development, Futurlab CEO Kirsty Ridgen stressed the importance of including fantastical locations as well as more gritty, realistic cleaning jobs. This led to the creation of sites like the storybook cottage, a home in the middle of the woods hinting at the classic German story of Hansel and Gretel. Chequer notes that these jobs took the story into the realm of fairy tales, something that seeped back into the rest of the game.

Many of PowerWash Simulator’s most curious in-jokes – such as newspaper articles about Bigfoot and missing cat posters – were dropped into the game by its artists. “As a designer, it was always fun to stumble across these environmental details while playtesting a level in a similar way to how the player would, and if they didn’t contradict the story, then we’d keep them in.”Chequer says. “Those little touches really helped with making the town of Muckingham come to life, ensuring that the environments were as playful as we’d hoped.”

This didn’t stop FuturLab from keeping in some seriously creepy storylines, however. In the level The Detached House, you sort out an average-looking suburban home, only to find Enochian (angelic text) symbols spraypainted across the walls. As you clean, the homeowner kindly alerts you to strange noises and ghostly presences via text messages. By level’s end, PowerWash demystifies the paranormal and puts it on the plumber, but it’s still an effective scare. The team enjoyed having a build-up to something fanciful that, at its core, had a very mundane and easily inferrable explanation. “We wanted some of the situations to have a seemingly supernatural angle, even if they proved to be false alarms,” Chequer says. “This was to smooth the transition from the ‘realistic’ early jobs through to the more outlandish jobs near the end of the career mode.” 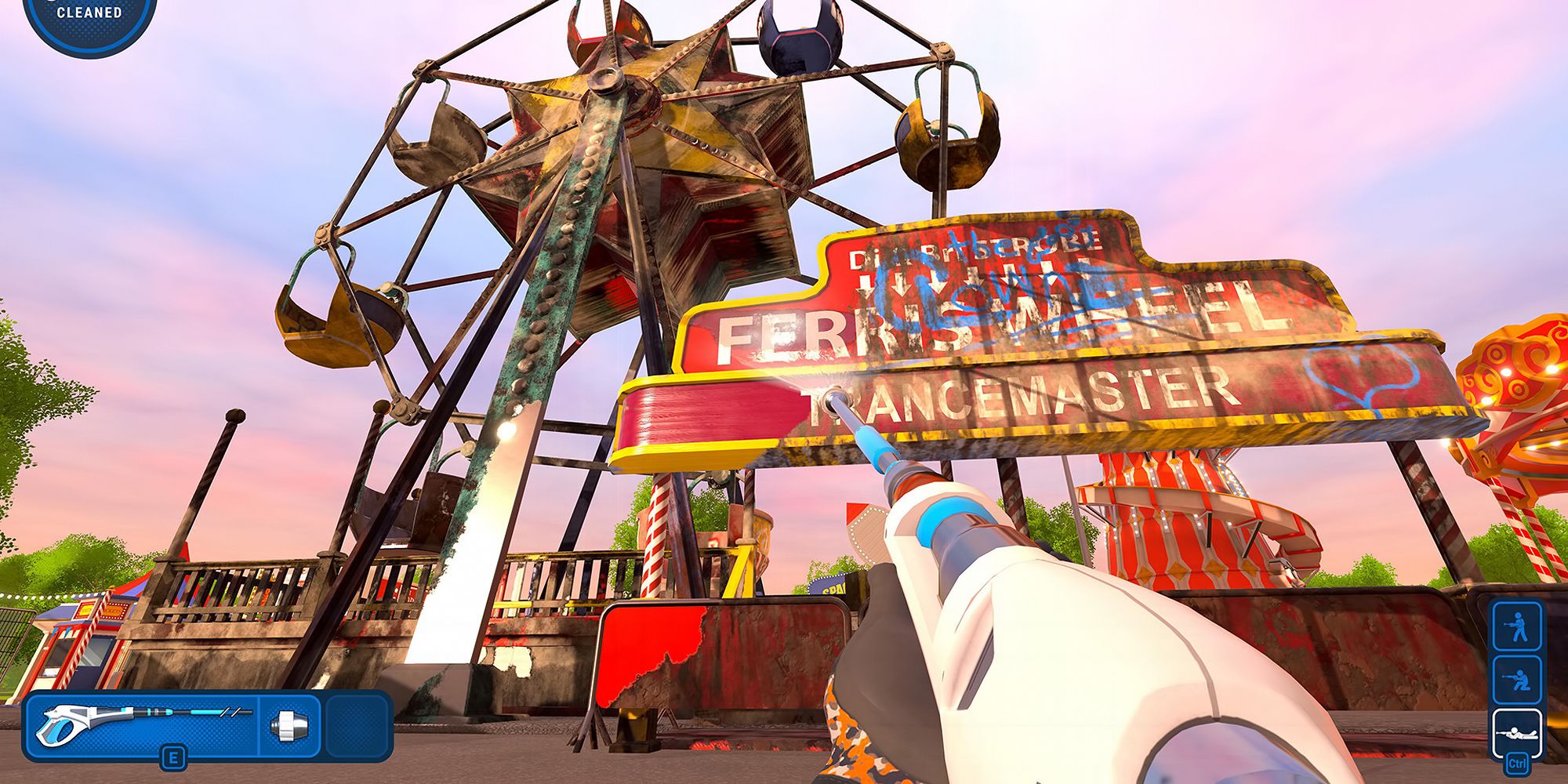 Convincingly matching elements of fantasy, sci-fi and naturalism through a sudsy lens was a task FuturLab wanted to get right. “Our initial discussions put the game at a 6/10 on the realism scale, which wasn’t ideal. So, I decided to split the question into two: How realistic did we want the cleaning process, and how realistic did we want the objects and dirt quantities to be? Those answers came to be 8/10 and 4/10, respectively,” Chequer tells me. “A firm line between those two aspects of the game was then maintained throughout development and led to quite a funny juxtaposition. The desired tone of the game became clear to me when I first saw the completely filthy bungalow on an otherwise pristine street. The customer really needed to have a lack of self-awareness to let their property get to such a state, and that mentality spread to most of the customers in the game.”

FuturLab used every tool in their soapy arsenal to create a rich world full of conspiracy, mythology and magic in a genre that typically forgoes any sense of narrative. The good news is that they aren’t ready to call it a day yet. “We are currently creating bonus jobs to add to the game that will feature more things to deduce in the environment and some more messages from customers, revealing further goings on in the town of Muckingham. So yes, there’s more to come!”