The good results come amid a variety of challenges, including rising competition from rival Advanced Micro Devices, which announced at the recent CES 2020 tech show that it had the fastest x86 chip in the world with its 64-core Threadripper processor, as well as key wins for its Ryzen 2 processors.

Intel, meanwhile, has had challenges getting enough chips into the market built with its 10-nanometer process (which it says is equivalent to rival 7-nm processes from competitors). But today’s news is good, considering Intel is a bellwether for the tech economy.

“In 2019, we gained share in an expanded addressable market that demands more performance to process, move and store data,” said Bob Swan, Intel CEO, in a statement. “One year into our long-term financial plan, we have outperformed our revenue and EPS expectations. Looking ahead, we are investing to win the technology inflections of the future, play a bigger role in the success of our customers and increase shareholder returns.” 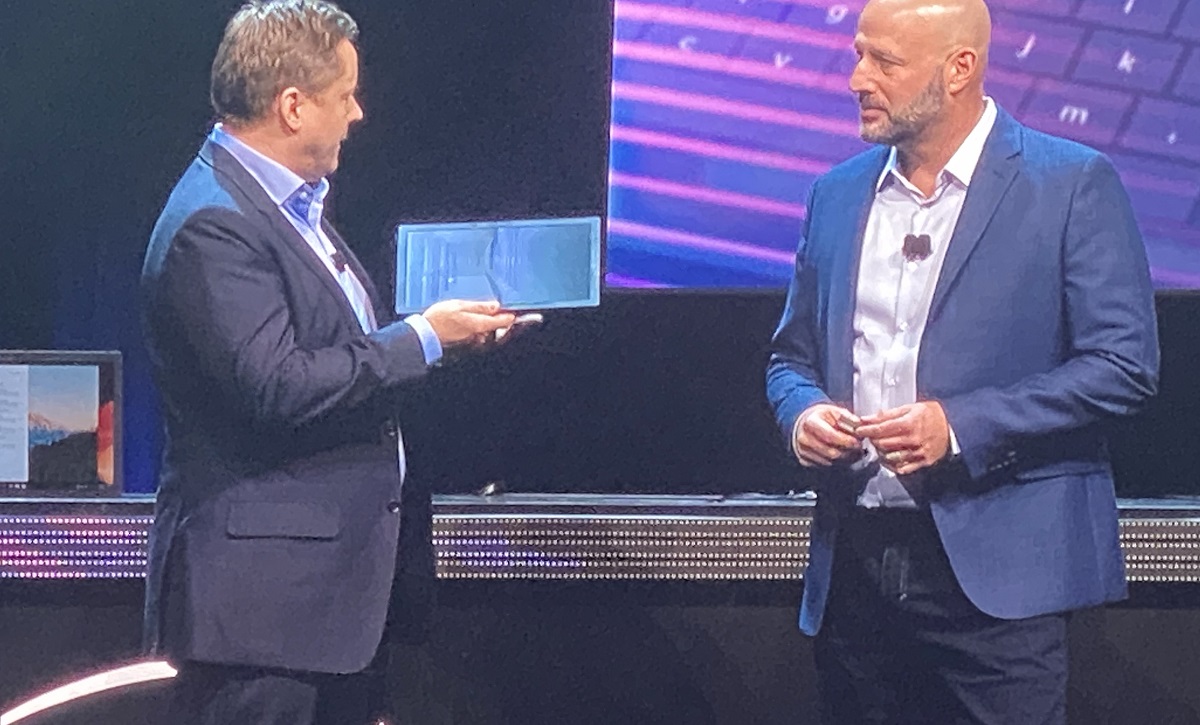 Above: Lenovo shows a foldable laptop at Intel’s CES event.

Intel’s stock price rose 7% in after-hours trading to $67.78 a share. With the latest numbers, Intel beat its expectations for the full year, with total revenues of $72 billion and non-GAAP earnings per share of $4.87, compared to 2018 revenues of $70.8 billion and EPS of $4.58. Intel had expected that it would generated non-GAAP earnings per share of $4.60 on revenue of $71 billion.

The recovery in datacenter revenues is a welcome relief, as Intel has traditionally been strongest in that market. Intel is also battling Nvidia and others to produce chips that accelerate artificial intelligence functions.

In 2019, Intel said it generated $33.1 billion in cash from operations, and returned $19.2 billion to shareholders in the form of dividends and stock buybacks. Intel also spent $13.4 billion on research and development and reduced its overall spending to 27% of total revenue.

Intel said it saw strong demand from cloud service providers for its datacenter processors. Intel acquired Habana Labs for $2 billion in Q4 to boost its AI portfolio for the datacenter.

Earlier this week, Intel named Omar Ishrak, CEO of Medtronic, as its new chairman, replacing Andy Bryant, who will stay on the board until the next stockholder meeting. Intel also added Square’s Alyssa Henry to its board.