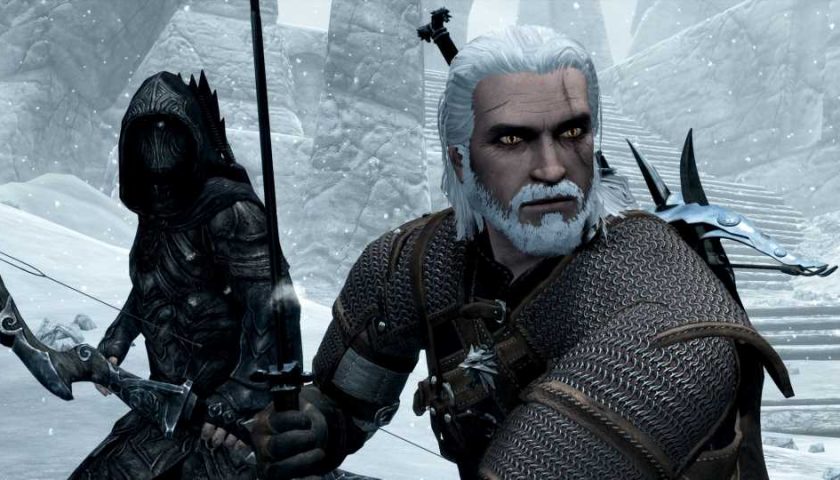 According to developer CD Projekt Red, the next Witcher game has left its "research phase" and entered pre-production. This is exciting news for fans of Andrej Sapkowski's dark fantasy world, but the reality is that we probably won't get to play it for a long, long time. The Witcher 3 took over three years to develop, and if this new game is grander in scale—which is more than likely—it could take even longer. It'll probably get delayed too.

Geralt of Rivia might not be in The Witcher 4. His story was wrapped up nicely at the end of Blood and Wine, and I feel like it's probably time for a new hero to step up. I'd personally love to see Geralt back in the saddle, but I'm doubtful. In the meantime, I felt the urge to hang out with him again. A Witcher 3 replay seemed like the obvious path, but with the 'next-gen' update not arriving till later this year, I felt I should resist the urge.

Then it struck me: what about Skyrim? This is a game with a huge, thriving mod scene. Surely someone has put Geralt in there by now. They must have. After a quick Google, and dragging some data files around, I find myself in the Winking Skeever pub in Solitude face to face with a gruff, cat-eyed monster slayer with two massive swords and a wolf medallion. He speaks to me and it's him. It's Geralt. With the proper voice and everything. 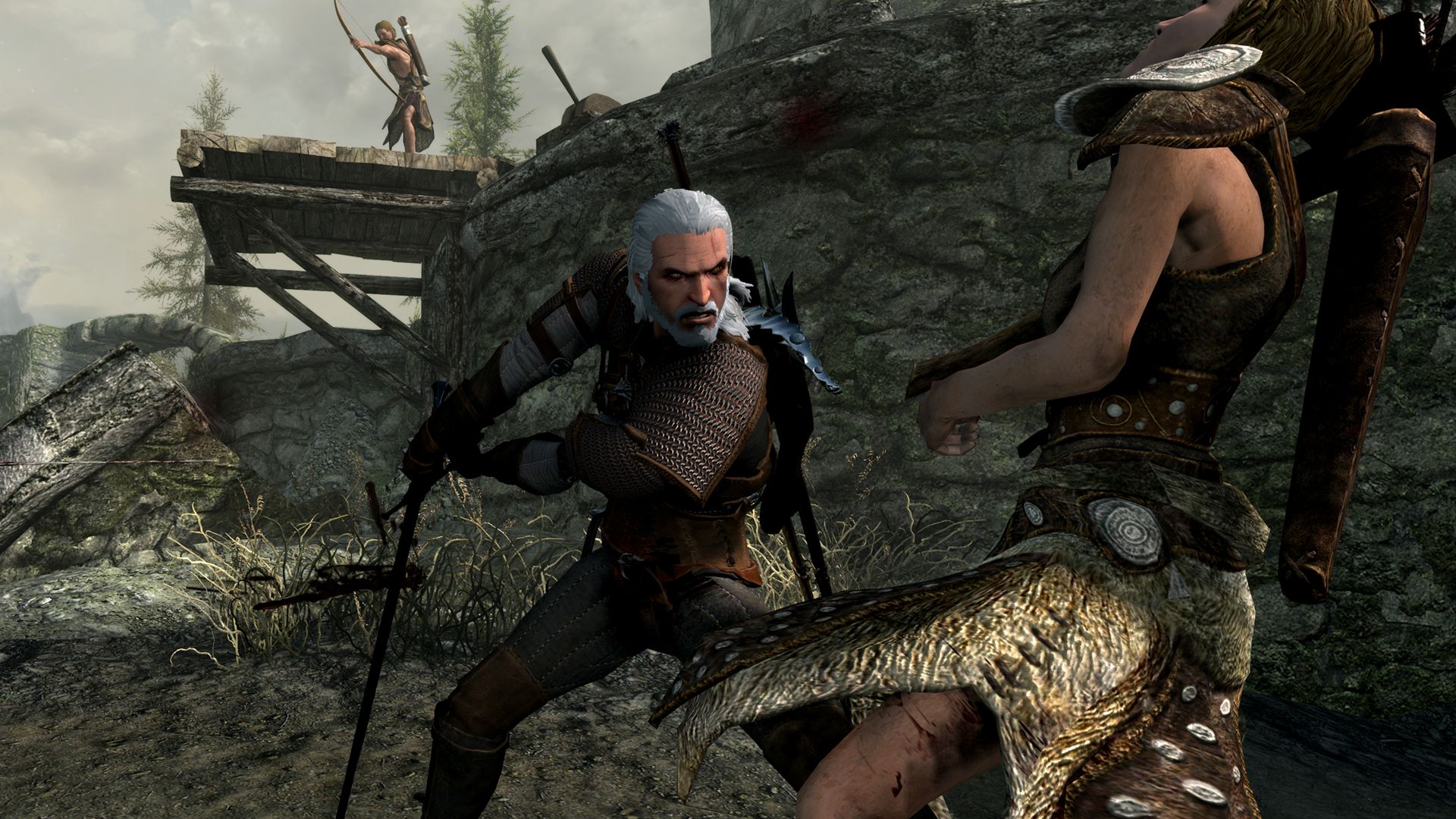 I love modders. They think of everything. I'm using a mod called Geralt of Rivia SSE Voiced Follower—an updated version of a mod by imAarwyn tweaked to be compatible with Skyrim Special Edition. This lets you recruit Geralt as a follower, with dialogue pulled from The Witcher 3. It's a surreal feeling walking into the Winking Skeever and seeing an authentic-looking Geralt sitting in the corner casually swigging from a flagon of ale.

It doesn't take much convincing to get him to join me, despite the fact I've just wandered in off the street and he has no idea who I am. I feel like the real guy might be a little more discerning in his choice of companions, but let's not fret over that. The important thing is that I now have Geralt of Rivia following me around Skyrim—and not just a generic NPC that's been dressed up to look like him, but a proper, fully featured Geralt. 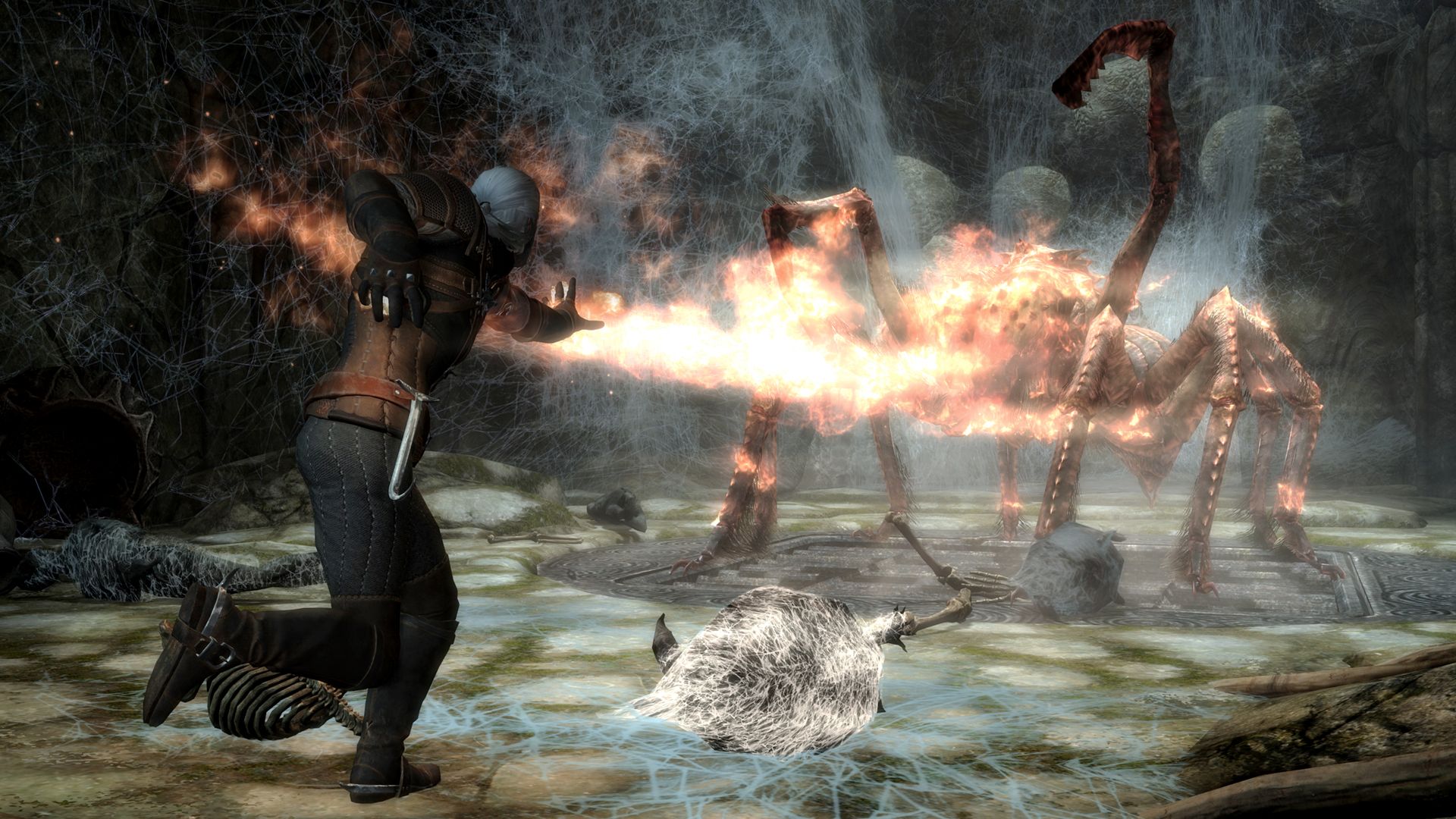 He has Doug Cockle's unmistakable voice, commenting on his surroundings or the weather as we wander. If monsters are near he says his medallion is humming. He has an inventory full of powerful witcher potions I can use, including Swallow and Tawny Owl. In battle he uses both his swords and specially made custom spells based on witcher signs. He scorches enemies with Igni and protects himself from distant archers with Quen.

As you might expect, he's a beast. To see him in action I take him to Bleak Falls Barrow, an early dungeon that's always a good way to test out a new follower. He rampages through the crypt effortlessly slicing through (and occasionally roasting) Draugr, bandits, and giant spiders. I barely have to lift a finger. If you're role-playing as a pacifist, mage, or other squishy character, using followers as your muscle, he's a formidable ally to have on your side. 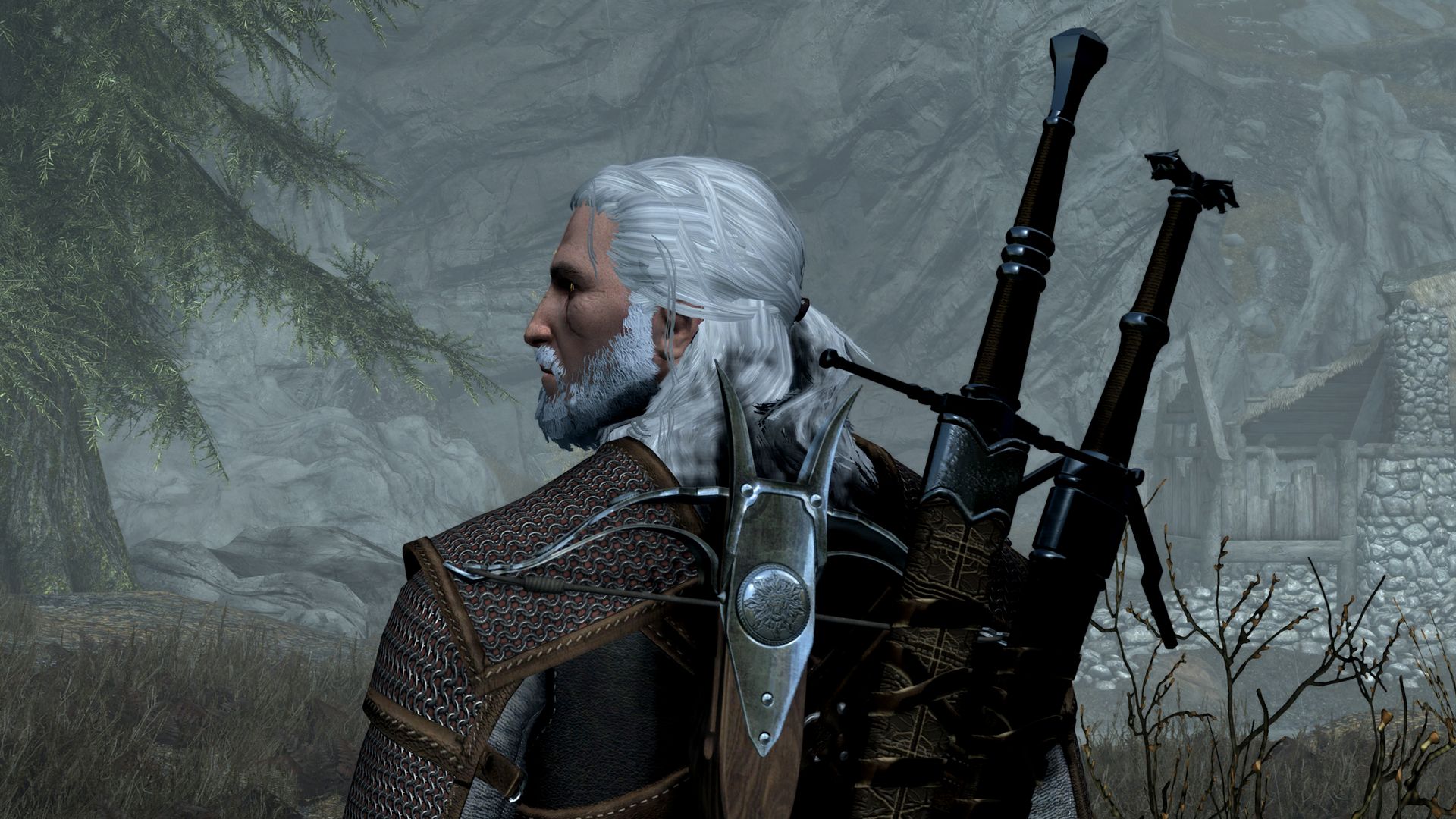 Geralt has over a hundred unique lines of dialogue, including some that only appear during certain times of day or in certain locations. I feel like I've only heard a handful of these, so I'm looking forward to seeing what else he has to say. I'm loving having him around—especially when we're fighting human enemies and he uses his finishers, some of which are gloriously brutal. The Witcher 4 might be years away, but this is a fine substitute.