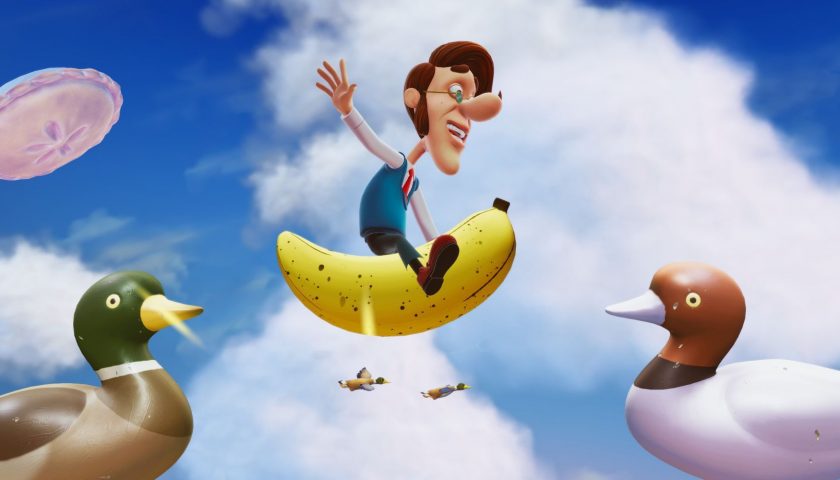 At long last, Hugh Neutron has been added to Nickelodeon All-Star Brawl. Yes, Hugh Neutron, not his son, Jimmy. And as we've come to expect from the platform fighter, his moveset is full of references to the show, and a bunch of jokes too for good measure.

As discovered by Hugh's voice actor, Mark DeCarlo, Hugh's recovery move references the "life-changing" time he sat on a banana. This is far from the only reference in his moveset, with the devs clearly putting a lot of care into crafting his attacks and animations.

On top of his banana recovery, Hugh has a victory animation that references his Donut Boy song. It's fair to say that the team working on Nickelodeon All-Star Brawl's ongoing development have been keeping an eye on fan requests.

The best bit of all has to be how Mark immediately gets the reference as soon as he sees the banana. "Whoa, that changed my life", he proclaims, testing out Hugh as soon as the update went live.

To see Mark's full reaction, check out this video and skip to around 22-minutes. Having spent months mobilizing his fans (the #Hughnation) to get his character in the game, it's great to see him have a blast with it, experiencing what he calls "Hugh's greatest hits". He eventually gets the hang of the controls and takes Nigel Thornberry out with a duck. Being able to ride Hugh's motorcycle is another issue entirely though, as he keeps driving it off the stage. In his defence, riding a bike on a floating pie can't be easy.

Hugh Neutron is live in the game now. He is one of the paid DLC characters, and costs £3.99 to unlock alongside his alternate costume and stage. He can be picked up in a bundle with Jenny Wakeman and (future release) Rocko for £9.29. Nickelodeon All-Star Brawl is available on PlayStation, Xbox, Nintendo Switch, and PC.