The Pokemon franchise is designed around single-player experiences and PVP multiplayer battles. It’s not built for the group party dynamics of a game like Dungeons & Dragons, but the monsters from Pokemon can still be used as enemies for parties to face. To this end, we have statted out the Squirtle line for use in D&D adventures.

Squirtle was a popular choice of starter Pokemon in Pokemon Red & Blue. Bulbasaur had the advantage against Brock and Misty, but Venusaur wasn’t quite the powerhouse in Gen 1 that it would become in later entries in the series. Charizard was awesome, but it took a lot of hard work to evolve, as Charmander was ineffective against Brock and Misty. Squirtle was the middle-road Pokemon, as it didn’t struggle against the early Gym Leaders, but it still had a cool evolution to show for it at the end. Blastoise would go on to become even more fearsome when Mega Evolutions were introduced, as well as gaining a Gigantamax form in Pokemon Sword & Shield.

Related: How To Turn The Bulbasaur Line From Pokémon Into D&D Monsters 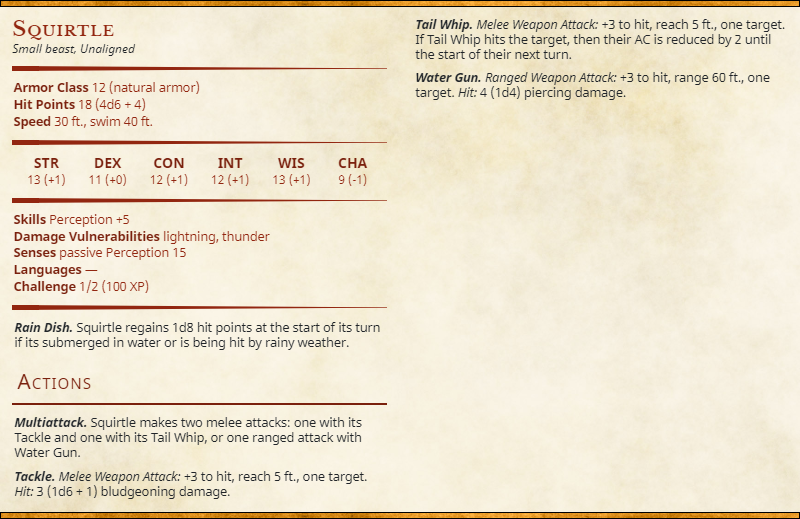 The various D&D worlds have a number of amphibious monsters that reside near land and interact with other species. In the case of Squirtle, these monsters tend to hang out in small groups in rivers and other waterways. Squirtle are known for their mischievous nature and many a traveler has found their gear pilfered by these creatures, who will grab items like food before diving into the water for a swift getaway. When prompted to fight, Squirtle will pepper enemies with Water Gun while hiding within pools or rivers, as their wounds will slowly heal when submerged. 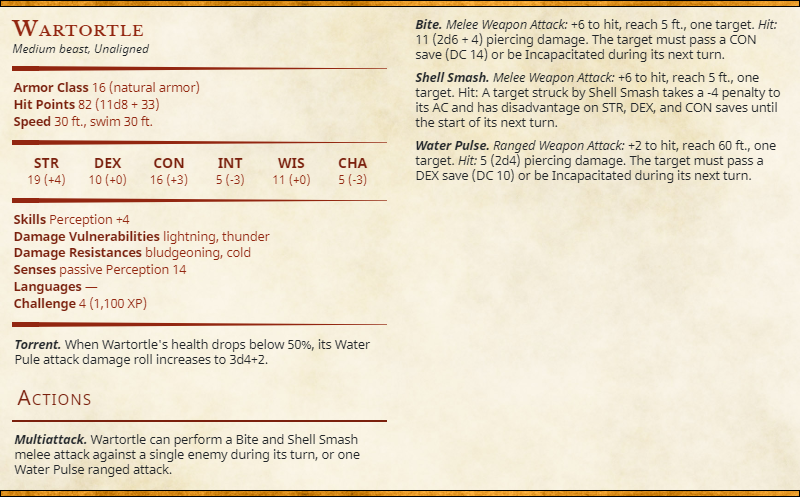 These older Squirtle develop finely attuned ears and a bushier tail, which makes them even more skilled at swimming. While Squirtle are known for their mischief, Wartortle will directly engage other monsters in battle. A Wartortle with lots of scars on its shell is the survivor of many fights and it’s both respected and feared by others of its kind. Wartortle are more cautious when it comes to engaging humans/demihumans in battle and will likely flee, rather than face a group of enemies against which it cannot win. 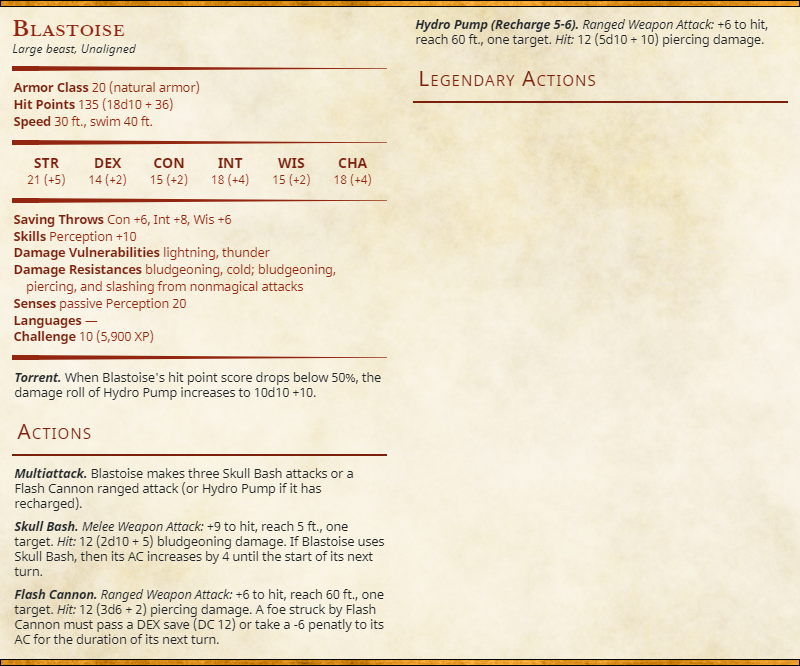 The mighty Blastoise develop monstrous growths made of hornlike material that jut from their shell. These cannons are the medium through which they fire incredibly powerful jets of water, whose strength is said to match those of a dragon’s breath attack. Blastoise are known for breaking enemies with their thick skulls, as well as firing lesser jets of water that put foes off-balance and make it hard for them to move. Blastoise generally reside in deep lakes that are found underground, but it’s rumored that powerful Druids have spells that can charm them, in order to use them as protectors of sacred natural places.

Next: How To Use Pokémon’s Mewtwo As A Dungeons & Dragons Boss 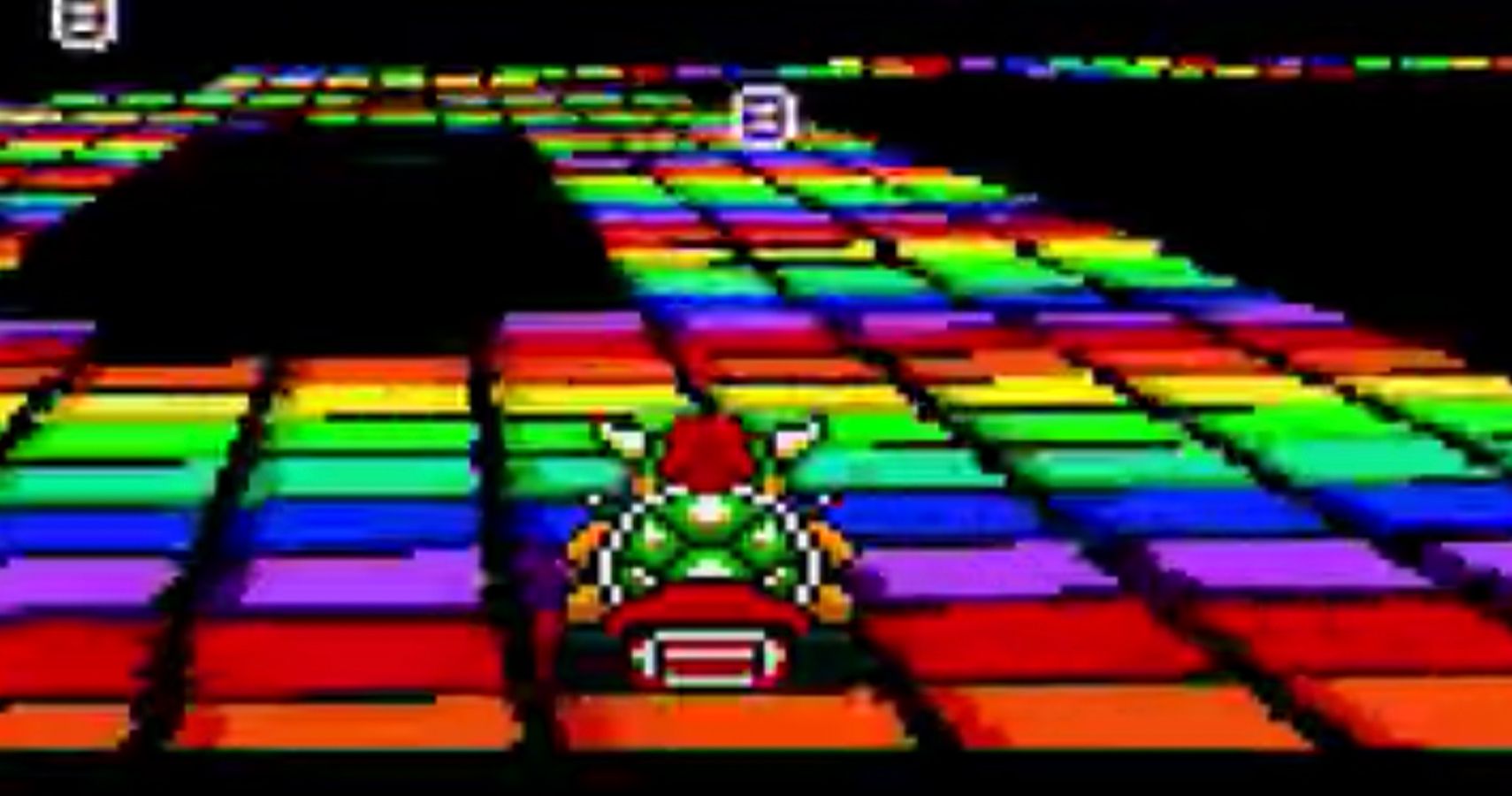 Swery’s The Good Life Purrs Up A Summer 2021 Release
We and our partners use cookies on this site to improve our service, perform analytics, personalize advertising, measure advertising performance, and remember website preferences.Ok