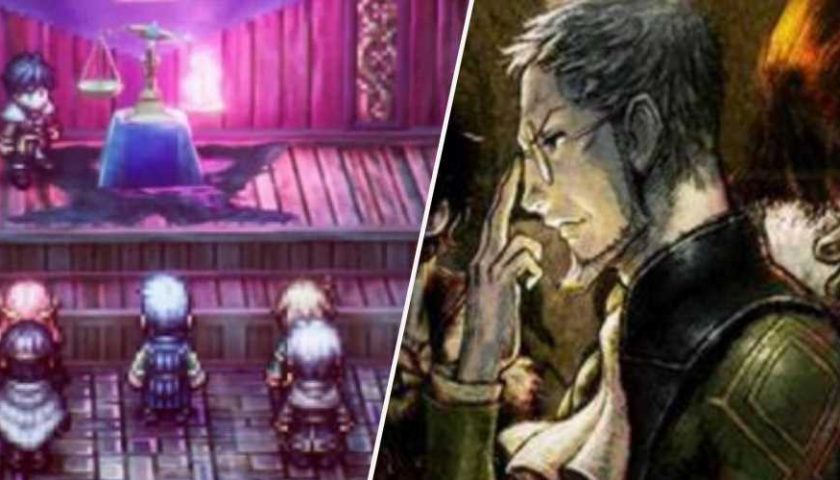 "Serenoa's convictions have been strengthened." Play Triangle Strategy for more than an hour, and you will have seen the phrase pop up on the top-right portion of the screen at least two dozen times. It's nice to know the young lord of House Wolffort is no philosophical sycophant, but what does this really mean? Why are Serenoa's convictions constantly being strengthened, how do we as players affect the process, and why should any of us even care?

Conviction, as it happens, is a shorthand for a three-pronged system: Liberty, Morality, Utility. The three play against each other in varying ways, and they're pivotal in the making of many of Triangle Strategy's narrative decisions. 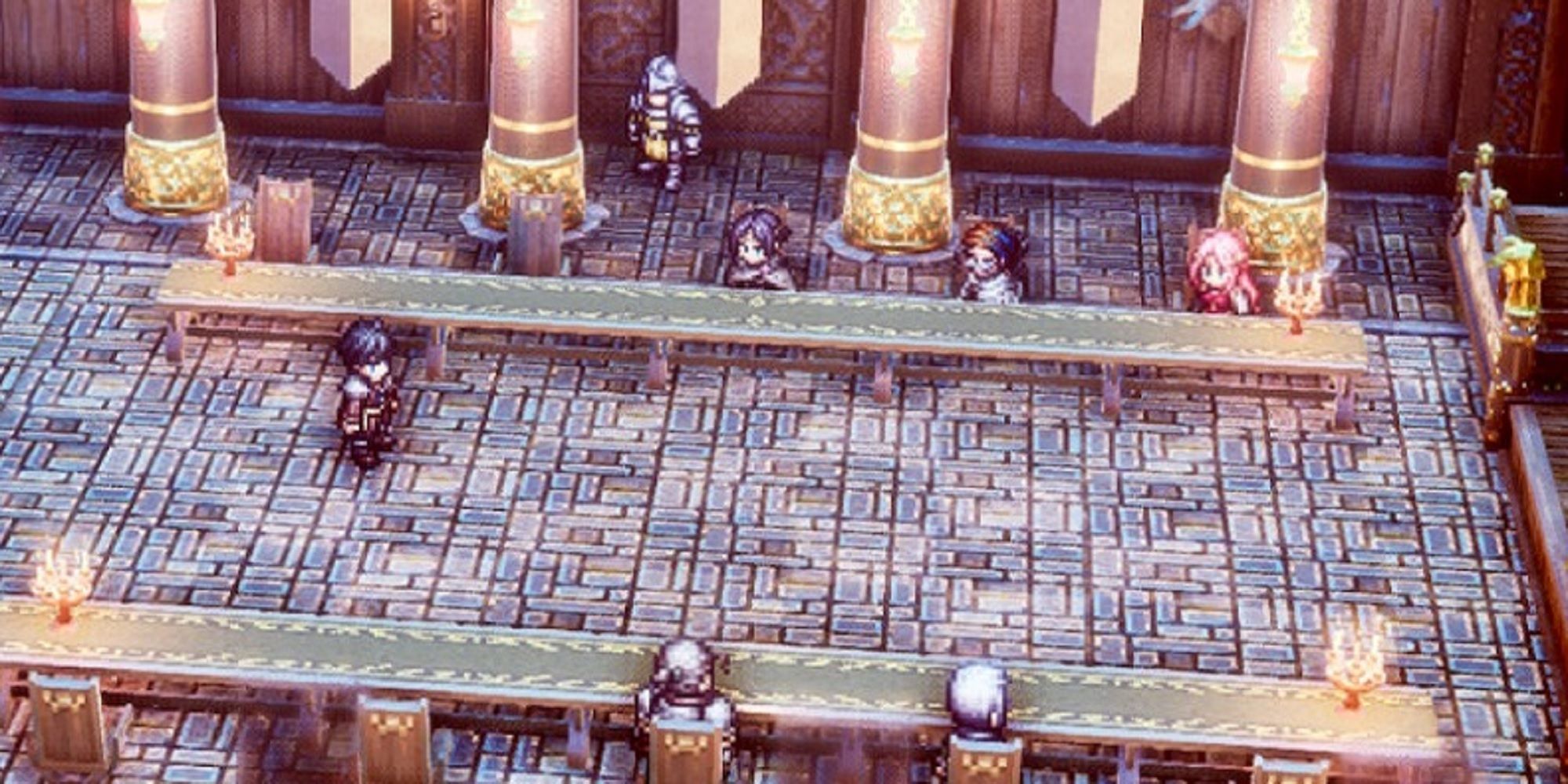 Triangle Strategy was criticized pre-launch for sticking to its bizarre title, but at least it owns it. Everything about the game, thematically, seems to revolve around the form of a triangle to some extent or another. In the case of the Conviction system, that's plain as day with Liberty, Morality, and Utility.

A wise ruler employs some measure of each of these aspects in their decision-making. The liberty to represent one's individuality within a kingdom; the morality to do what is right and refrain from what isn't; and the utility to take advantage of everything one can in order to further their people's happiness.

In Triangle Strategy, each of these aspects has a numerical designation. (The numbers are hidden until New Game Plus, at which point the whole thing cracks open like a nut and you can micromanage to your heart's content.) You accrue points based upon the choices you make throughout the game, and in turn, the total stockpile per aspect permits you (or rather, Serenoa) to exert greater degrees of influence when Scales of Conviction sequences take place.

The Scales of Conviction 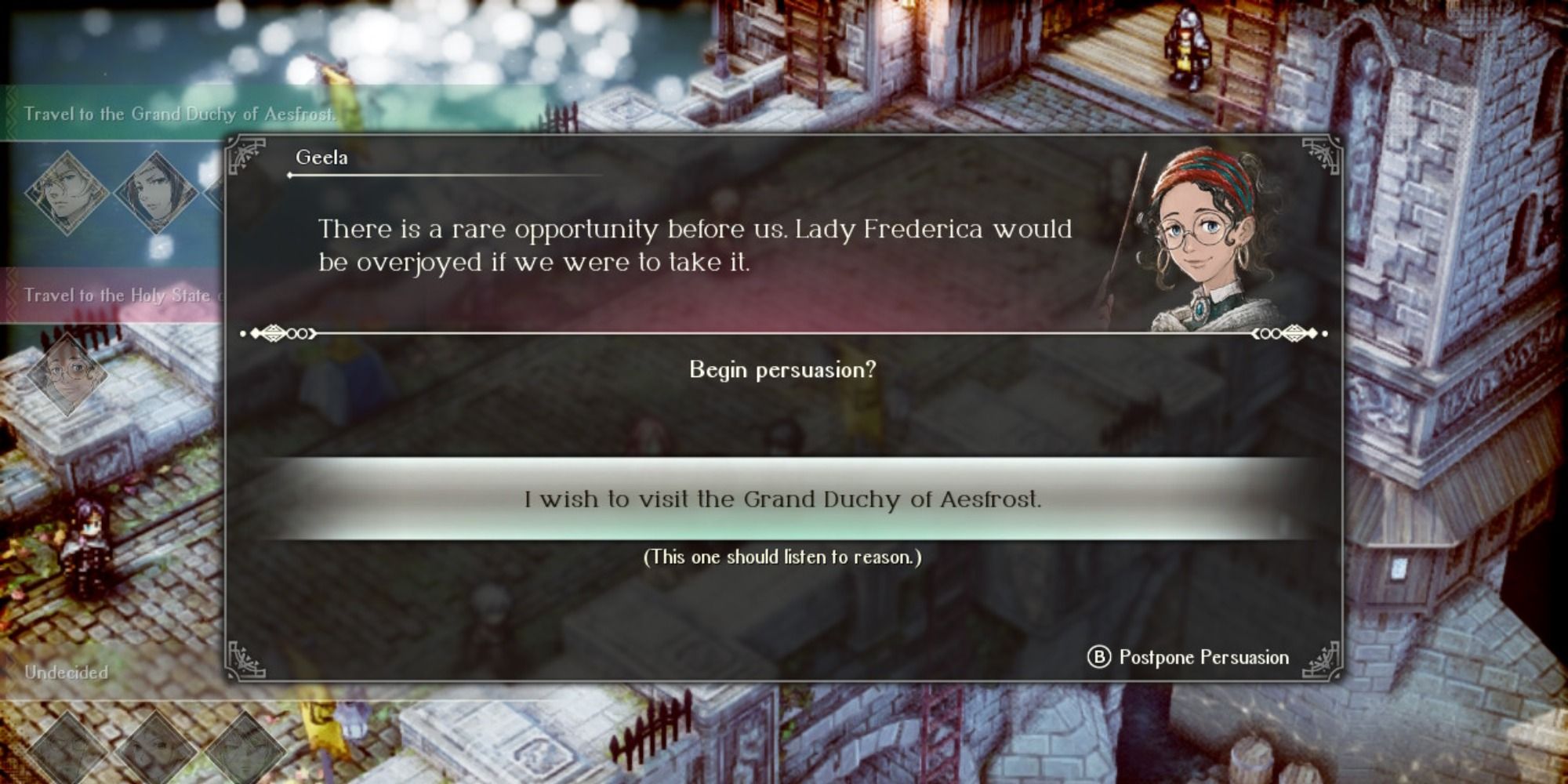 Raising Liberty, Morality, and Utility plays a direct role in your success rate of convincing the game's lead characters to see Serenoa's point of view during Scales of Conviction sequences. Serenoa's point of view, of course, is whatever yours happens to be, and yours will be reflective of which story path(s) you wish to explore.

Triangle Strategy takes a twisty path to its finale, with a fair few battles and story beats playing out in entirely different ways. This is first depicted in Chapter Three, when Serenoa must decide whether to visit Aesfrost or Hyzante.

All things considered, even this big decision is peanuts next to the more monumental, realm-shaking choices that Serenoa must make further on.

How Strengthened Convictions Reward the Player 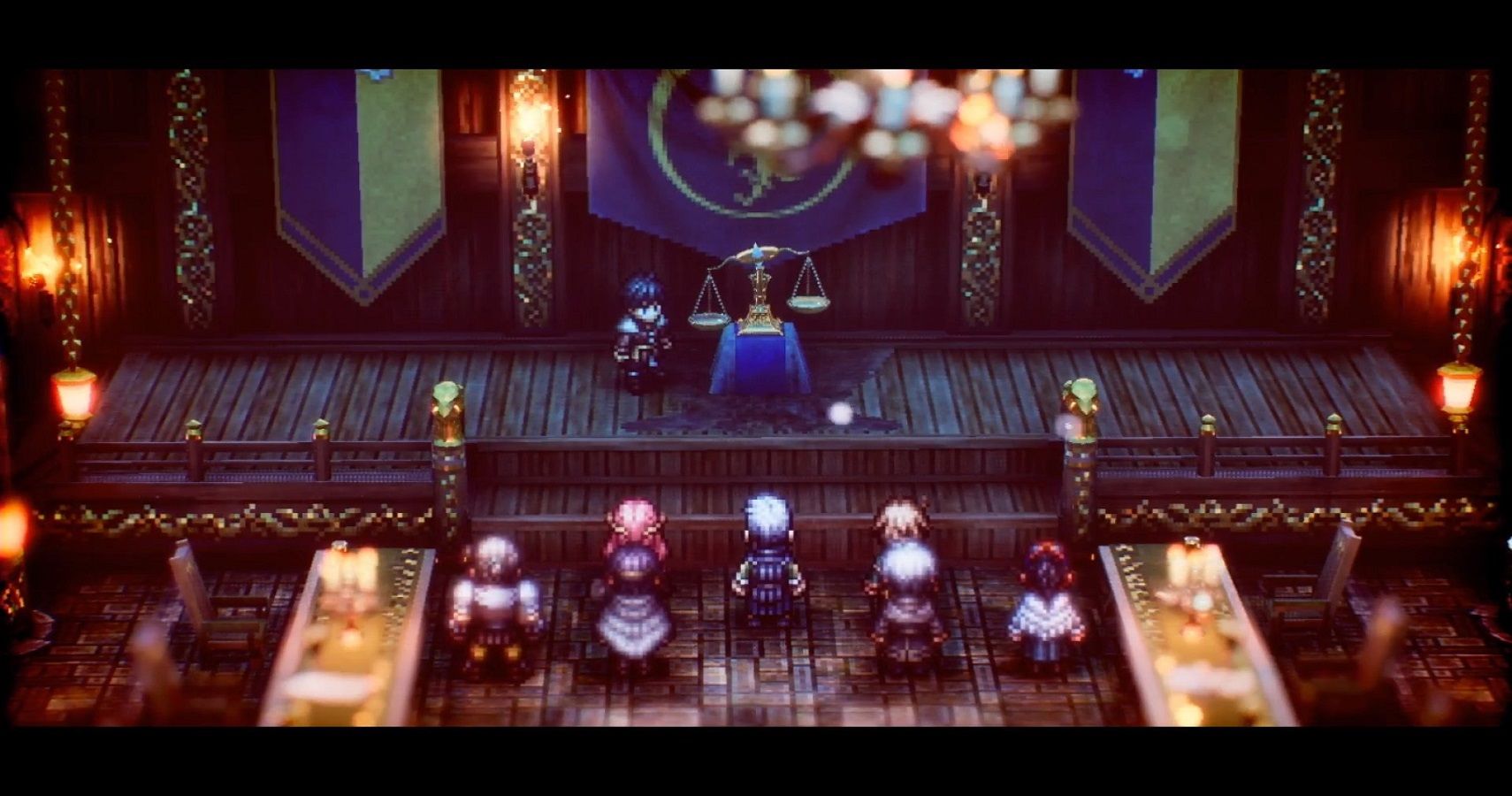 First, let's note that a heightened degree of Conviction in a particular aspect "feeds into itself" in a nifty fashion: selecting a dialogue decision during Conviction-related conversations will boost that decision's reflected aspect substantially.

So, for example, during a Scales of Conviction event you'll be chatting with, say, Geela. And in order to press Geela into agreeing with you, you'll want — again, hypothetically here — a high enough Utility score. Picking the Utility-based dialogue option will add another 50 Utility points to your stockpile, thus raising Geela's likelihood to listen as the conversation continues.

This is the most readily apparent example of Convictions playing out in your favor; whatever it is that our above example would theoretically pertain to, you'll stand a far better chance of accomplishing it with a high score in a particular aspect. Grinding that out, even if you can't see the exact stockpile number until New Game Plus, is still worth the effort.

HIgh Conviction scores also influence the arrival of new playable characters via Character Stories. Starting around the fourth chapter or so, Character Stories will be accessible by pressing the '+' button while on the field map. Some Character Stories further develop important cast members in fun ways, and those will typically pop up per how often you use a given character in battles. But the rest will, indeed, provide powerful new units for Serenoa's army.

These units will only show up for recruitment if a given Conviction aspect has achieved a high enough result. For example, Julio Wrightman won't be available to meet, greet, and mete out enemy fetes with until a player has reached a significant milestone amount of Morality points. It's possible to play through an entire path without ever learning the guy's name!