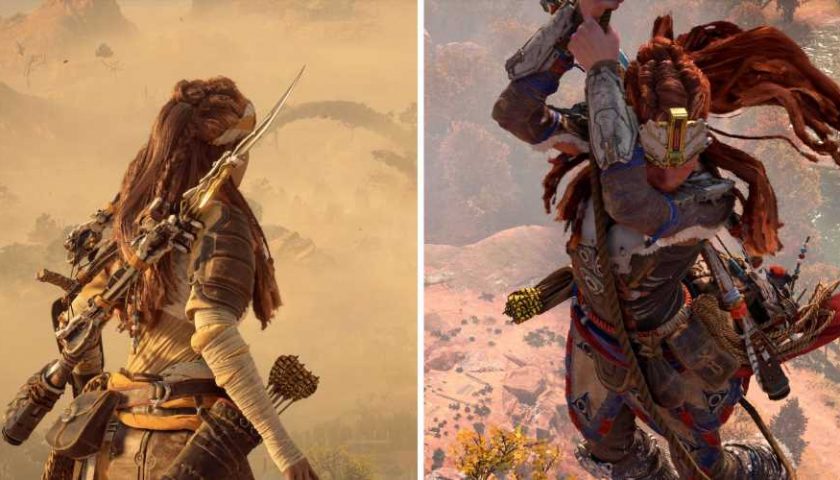 Horizon: Forbidden West brings a tale of discovery and opposition as Aloy tries to save the world. Again. There's so much to do within the game that it's unsurprising to find yourself distracted for hours through exploring areas that catch your attention and completing any side quests or errands along your path.

And then there are the things that every player does – whether intentional or not. Sometimes all you need in life is the ability to move the little digital character into a pit of fire to see if anything happens. We've all been there.

10 Spend Too Much Time In Photo Mode 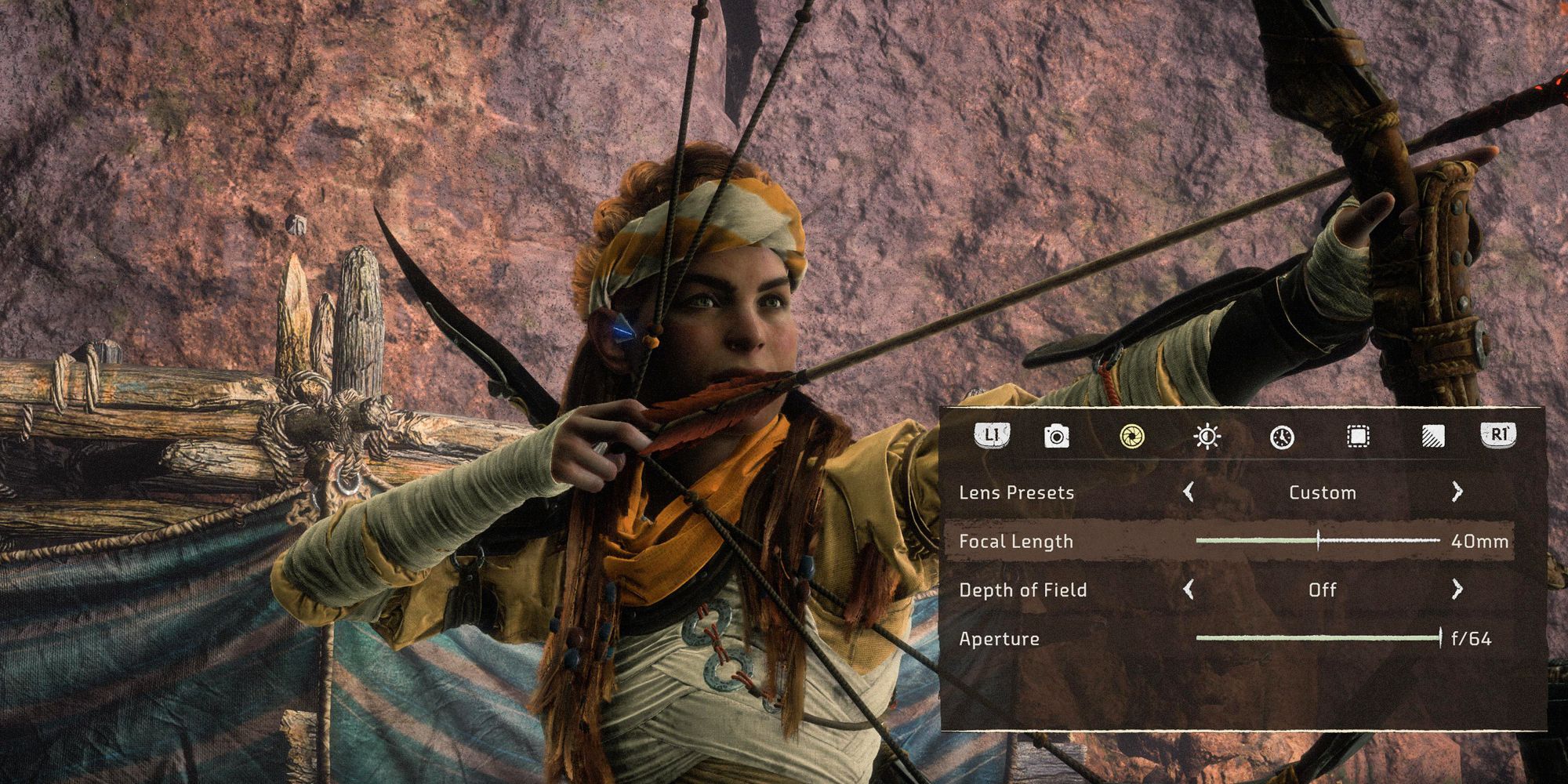 Once you realize Forbidden West has its very own photo mode, you'll never be able to play the game in the same way again. Gone are the days of following the main quest, completing a few side missions as you go because now, every time you pass a cool-looking area, your first thought will be to pause and take some photos. And there's nothing you can do to stop it.

Photo mode has all the general options like brightness, filters, and focal length, in addition to the time of day section that you can adjust to your liking. 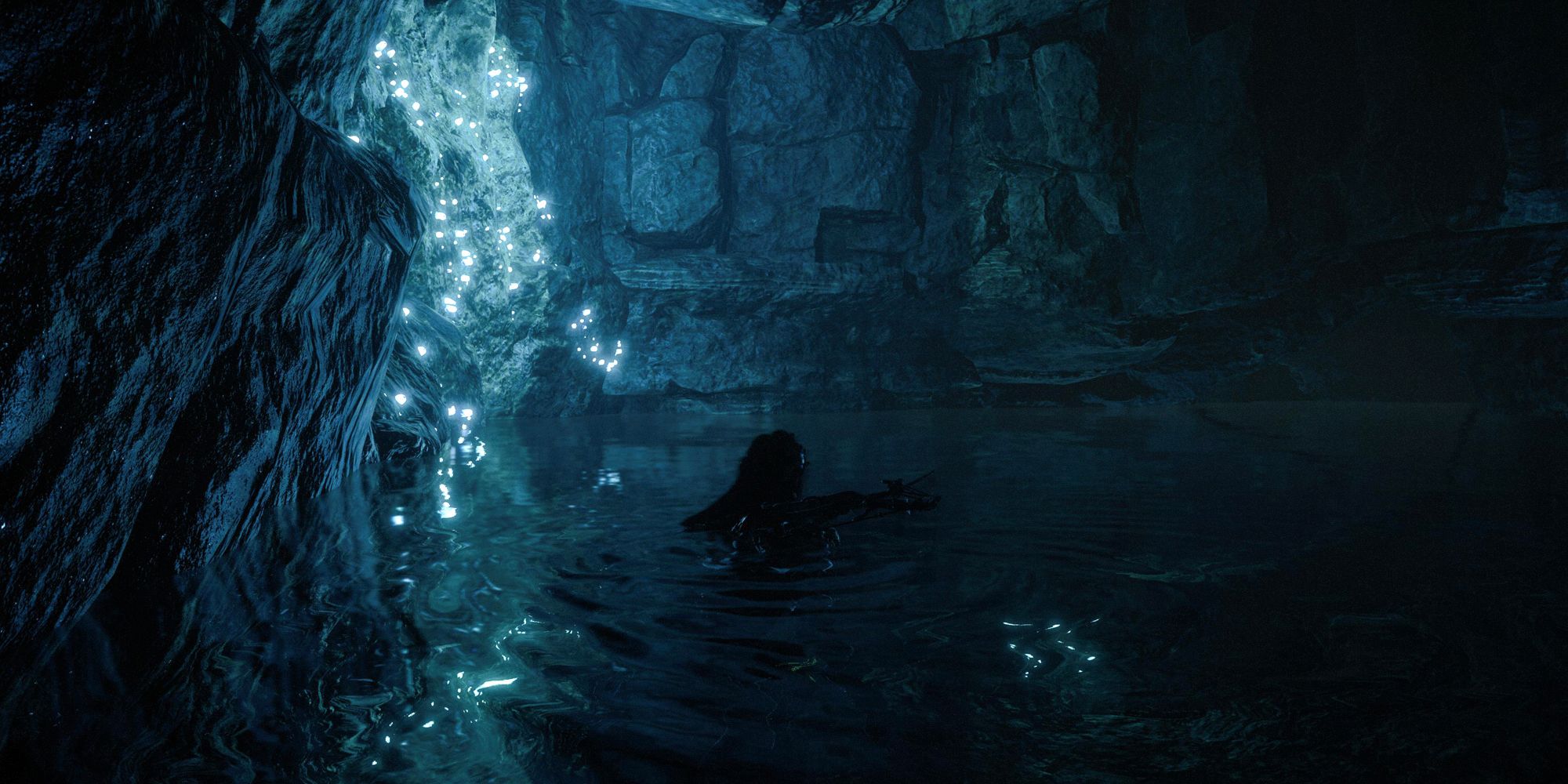 Everyone has been in the position of exploring absolutely everything you can get your hands on while ignoring the important story you should be completing right now. However, it isn't easy to do this when every corner you turn has a shiny new quest marker you just have to check out.

With any optional areas you find near the start of the game that involve some sort of swimming section, you might not be able to progress to the very end. But, of course, you'll still try to advance, even knowing it's more than likely to result in the Savior of Meridian's untimely death. 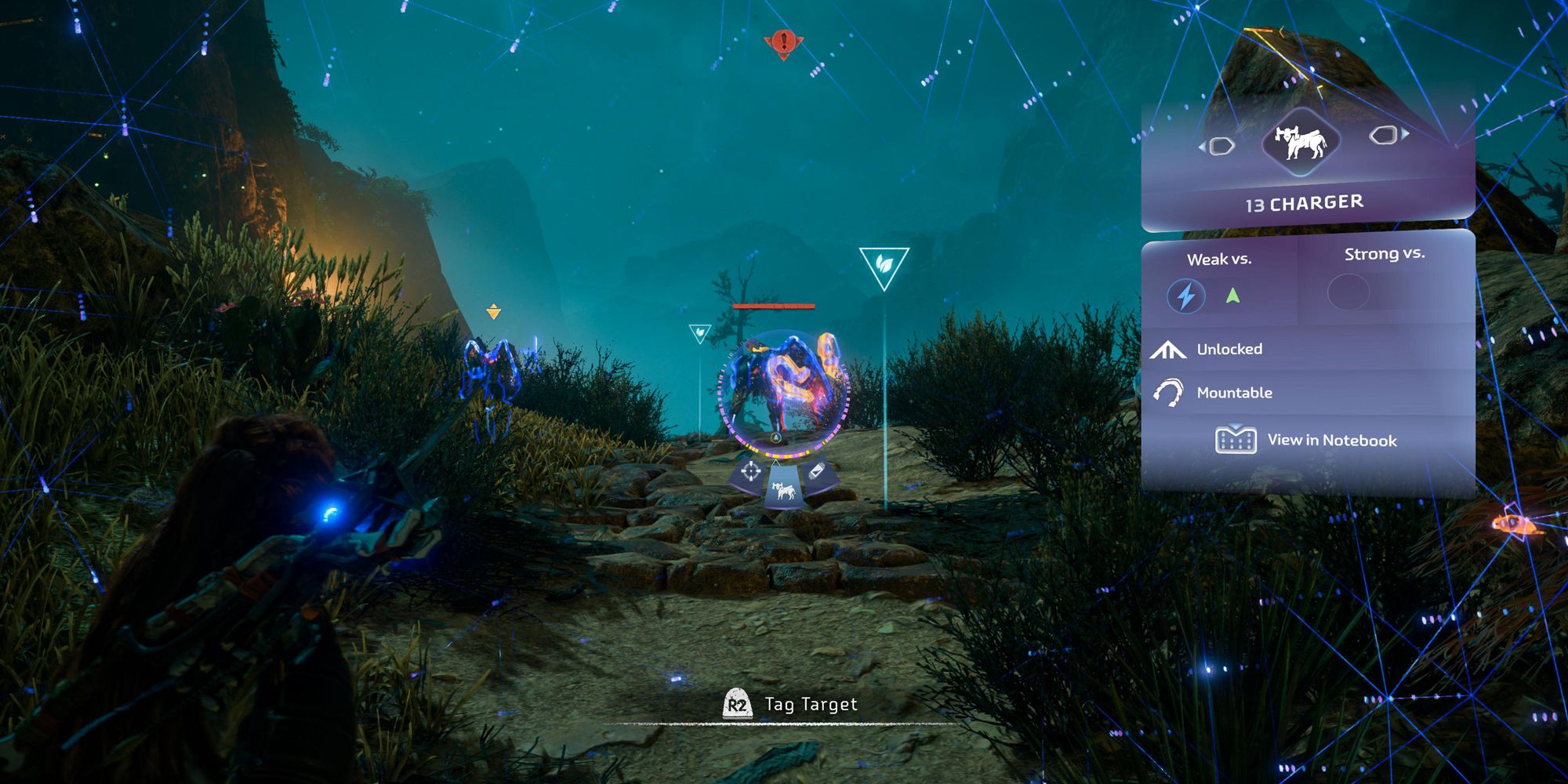 Gaining the upper hand in a battle is one way to save yourself any unnecessary damage in Forbidden West. One way to do so is to scan any nearby enemies before commencing with your battle strategy. However, with the game's fast-paced nature, this feature often becomes an afterthought, and by the time you remember, the enemy has already spotted you.

Scanning is still available in the middle of a fight though it's a lot harder to use since running and dodging will be the current focus. It's slightly embarrassing knowing you could've saved yourself if you just waited a couple of extra seconds to scan the machine, but sometimes there are just more important things at stake. 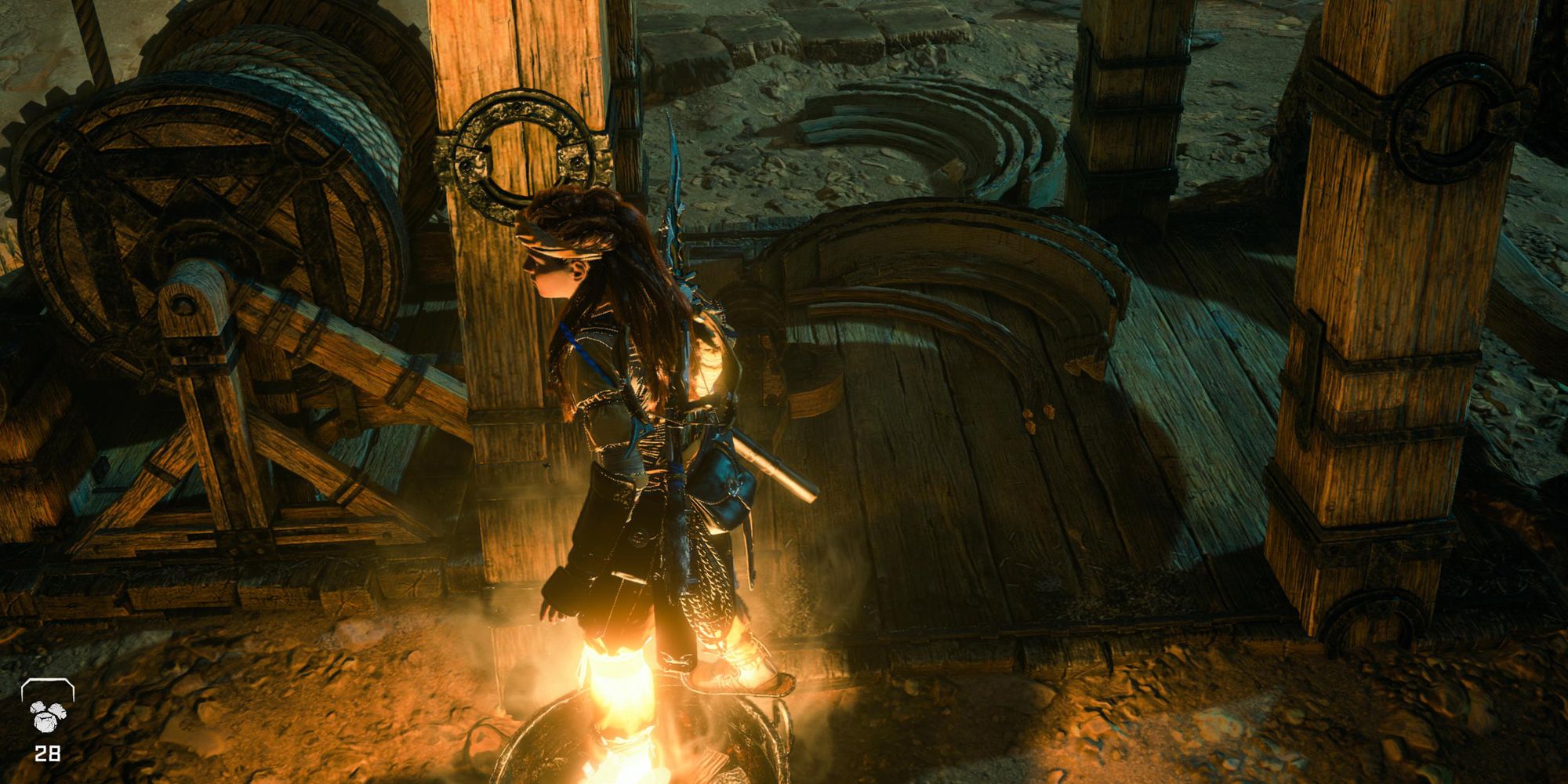 Give someone a controller and a playing field that allows them to walk in fire, acid, or any type of hazardous substance, and it won't be long before they jump right into the flaming ball of danger ahead. It's not that the intention of hurting the character is there but instead that we just have to know if the fire also does damage to Aloy. And the acid, and electricity, and everything else that looks slightly dangerous in the game.

It's essentially testing the limits of what a game allows you to do and whether you can get away with stepping in enemy fire, literally.

6 Get Distracted By The Realistic Graphics 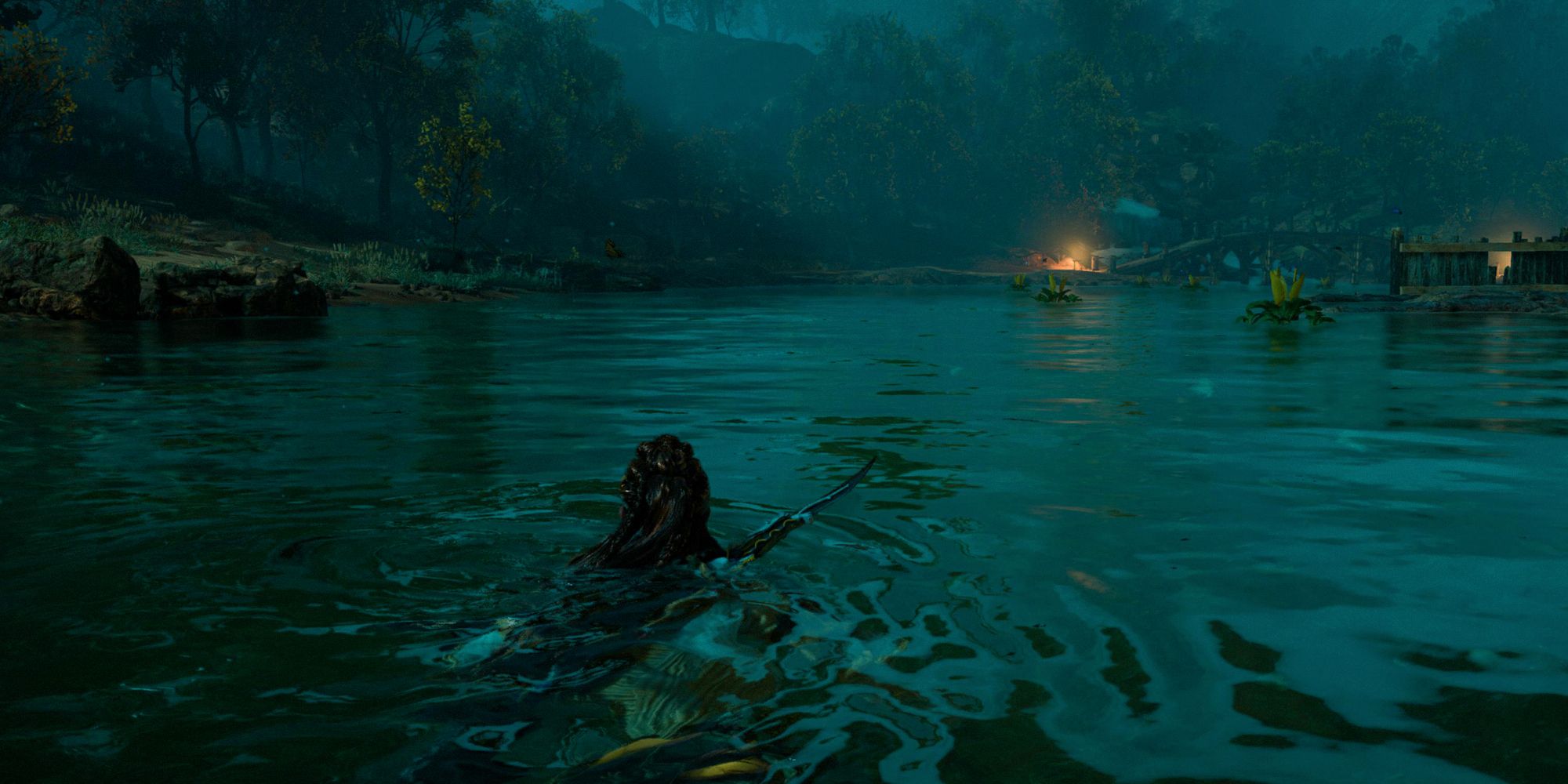 Yes, feeling the weight and power of a weapon as you wield it against a powerful opponent is great and all, but do you know what's better? Examining the curves and waves of the glistening water in the moonlight, the way it overlaps unto itself. How the waves ripple as Aloy pushes through the water and the strong winds that tug at her outfit.

Everything works in perfect harmony. The sounds and sights are something to hold high, making for moments where all you'll want to do is bask in the environment. 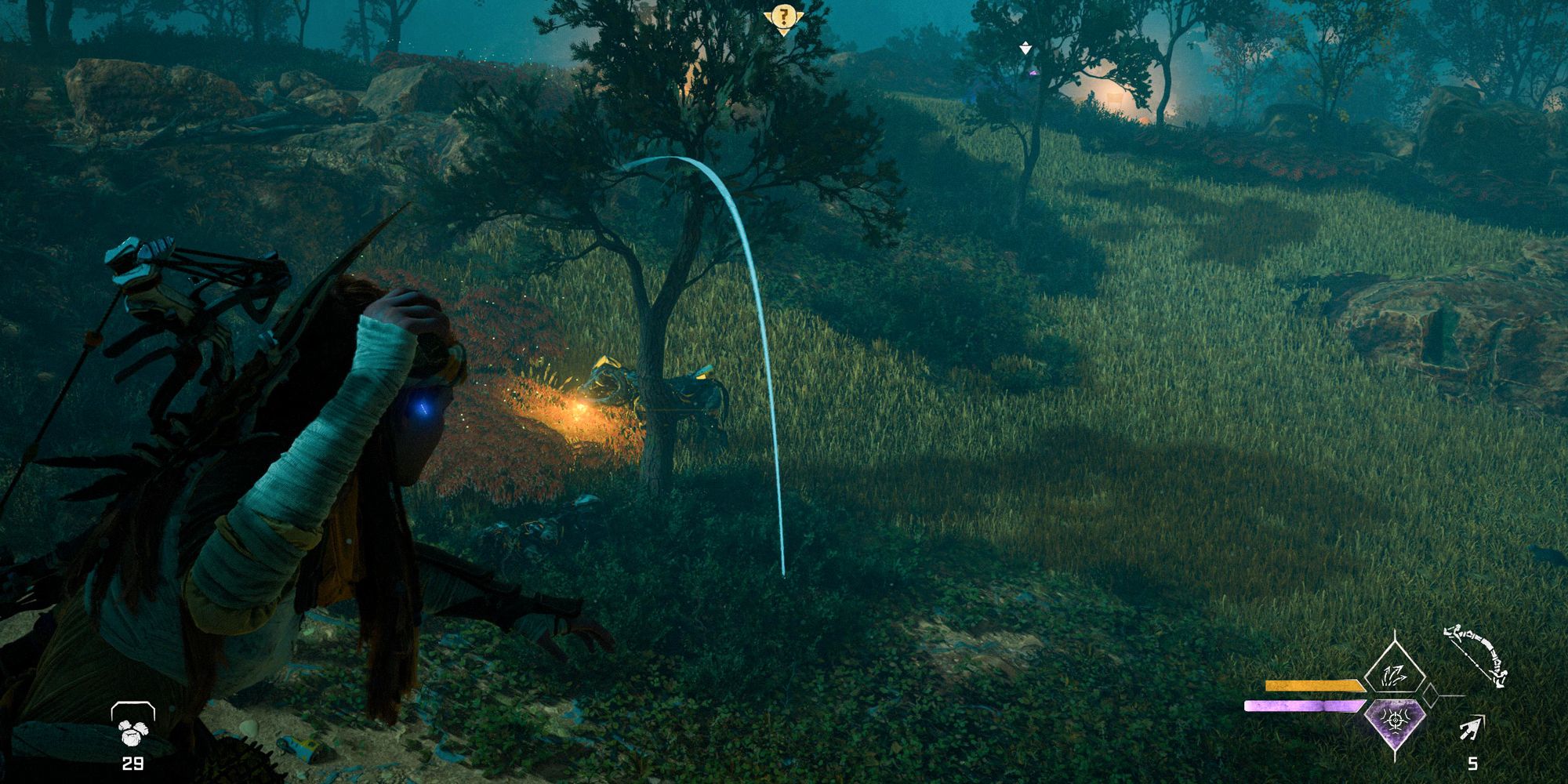 Why is throwing a rock such a gratuitous task? Attempting to find the sweet spot for aiming these guys is the equivalent of trying to find a needle in a haystack. Aloy is fantastic at controlling the fire of her bow but has the unfortunate disadvantage when throwing rocks.

Often, you won't even need to use rocks since there are grass patches and tall structures to hide within. But when you really need to get an enemy out of the way who just won't budge, be prepared to struggle with the mighty rock.

4 Climb Everything You See 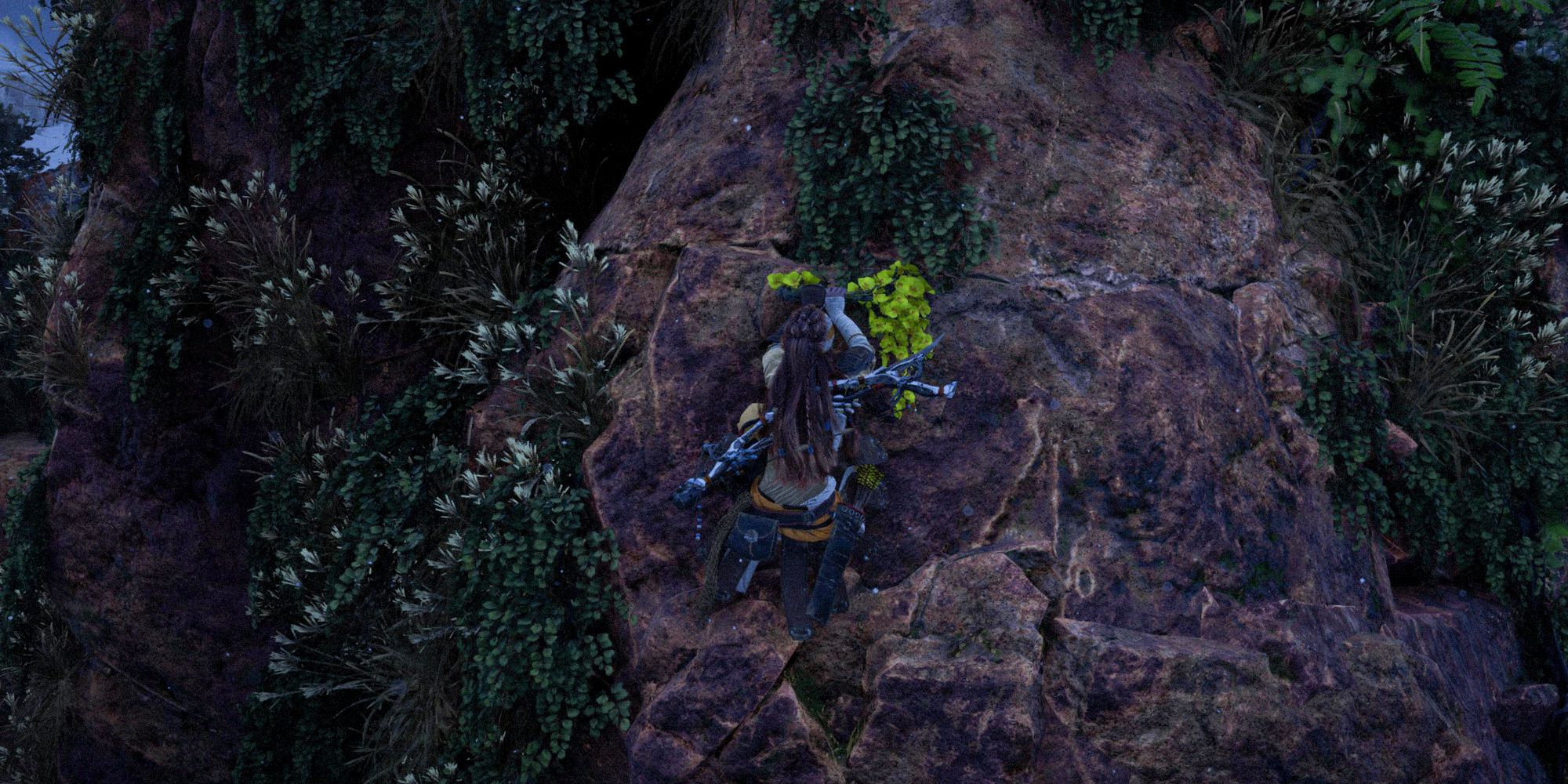 It turns out most things can be climbed in the Forbidden West, and on those exceptionally tall craggy rocks, valuables await. It's almost addictive to have this much freedom in a game where you can climb so much of the terrain, knowing you'll find collectibles or valuable resources along the way. Sometimes it won't even matter if you're in the middle of completing a quest because what if something significant can be found at the top of the scalable wall near to your location?

Forbidden West offers a lot of distractions, but luckily, they're welcome ones, so continue climbing as much as you want. Just be careful on the way down. 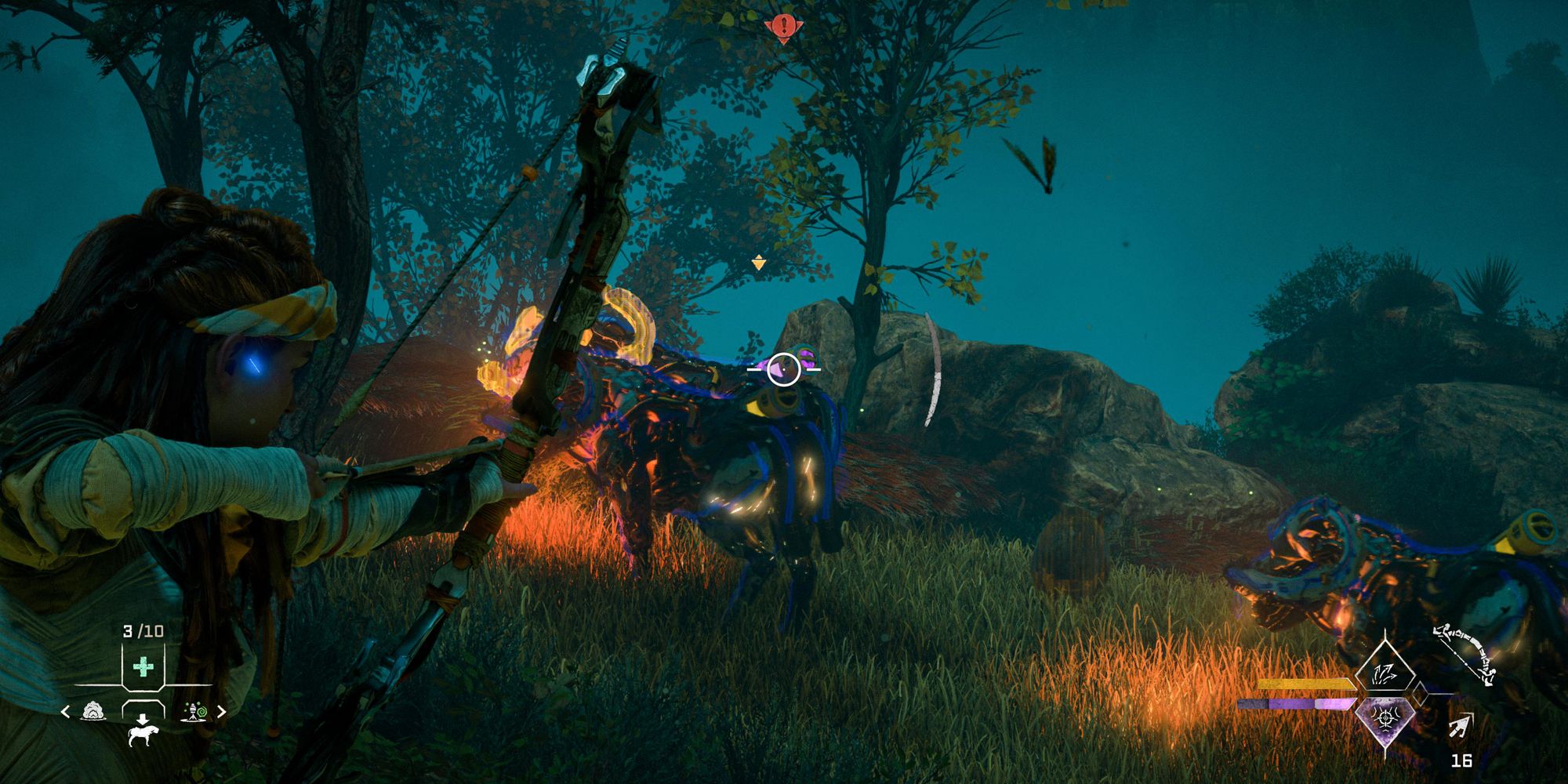 Listen, targeting on the move can be incredibly challenging, especially when tons of machines decide to swarm you, making it tricky to dodge out of the way. And although none of us would like to admit it, we've all missed the clearly marked weak spots—numerous times.

Using the feature that slows down time to help Aloy aim with her bow removes this struggle, but unfortunately, you won't always have this reliability. So practice as much as you can and try to perfect a quick aim.

2 Use The Shieldwing Whenever Possible 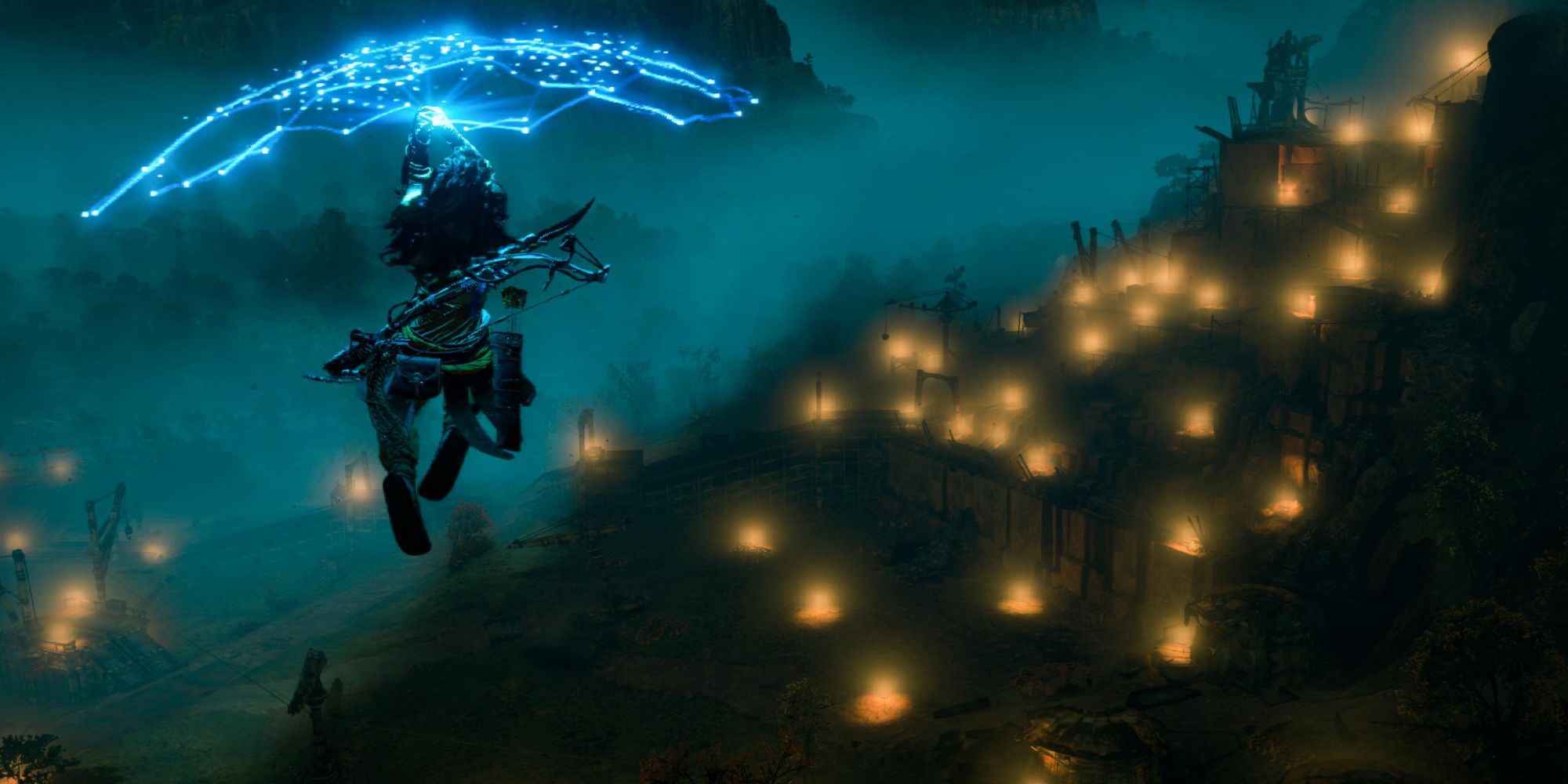 The Shieldwing isn't the only way to safely get back to the ground, but it is by far the most entertaining and can save a lot of time. This is probably why so many players opt to use the Shieldwing whenever they are given a chance. The trusty tool acts as a glider that can be opened by holding down the square button while in midair.

And the Horizon fanbase aren't the only people to enjoy messing around with the glider as when first used, Aloy will state her admiration and surprise for the fact the Shieldwing actually worked.

1 Forget To Spend Your Skill Points 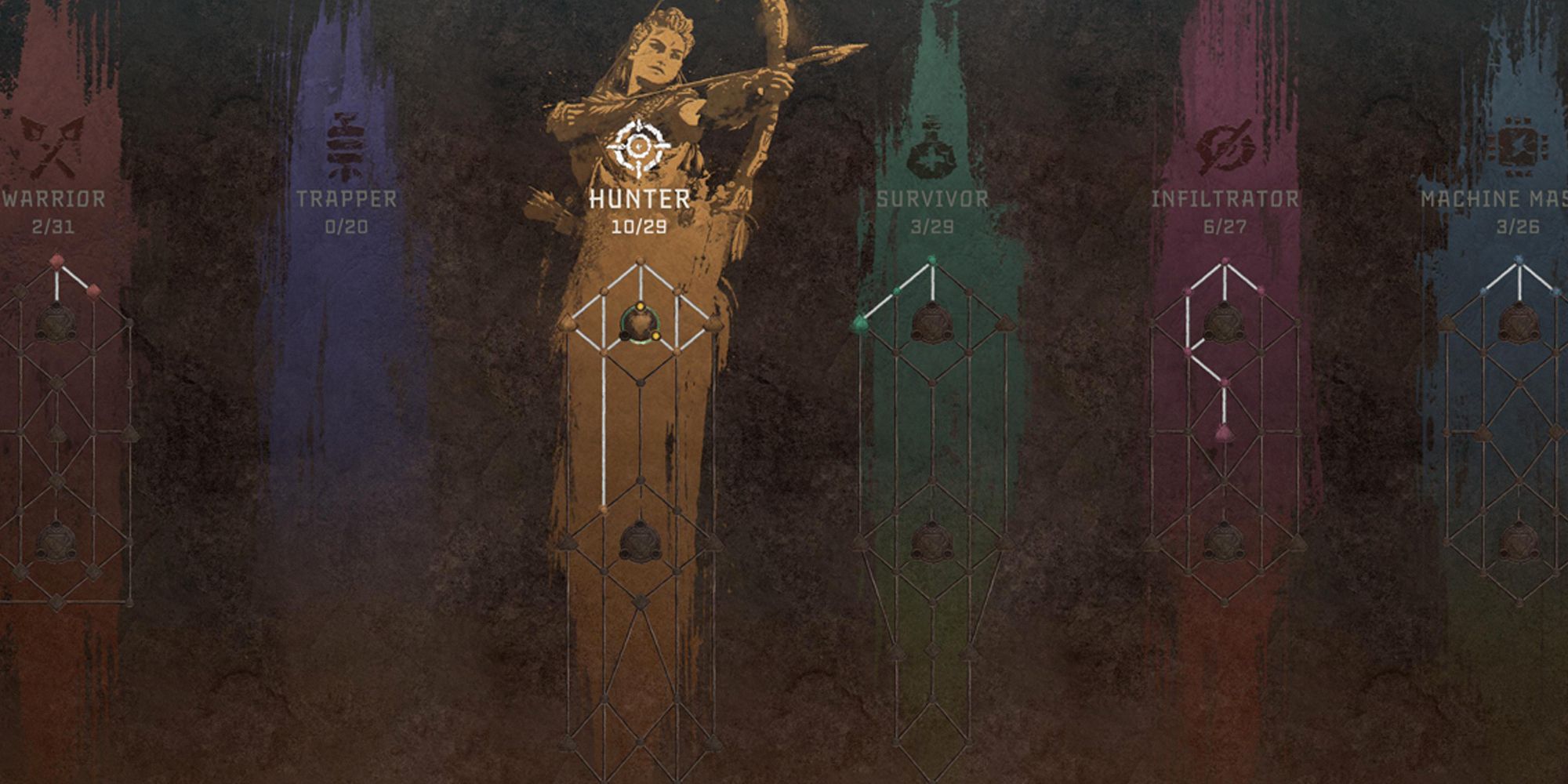 Racking up skill points is relatively easy in Horizon, so much so that after playing for a few hours and opening the skill tree, you'll be met with a lot of unspent skill points. Sometimes it's good to save up with the skill points, so you can spend them when you really need them.

This way, it's easier to save for the more expensive skills that'll help much more than the basic ones. However, this doesn't mean it isn't always a surprise once seeing how many points you have yet to spend. So, if you feel it's been a while since you've checked out the skill tree, take a quick look.