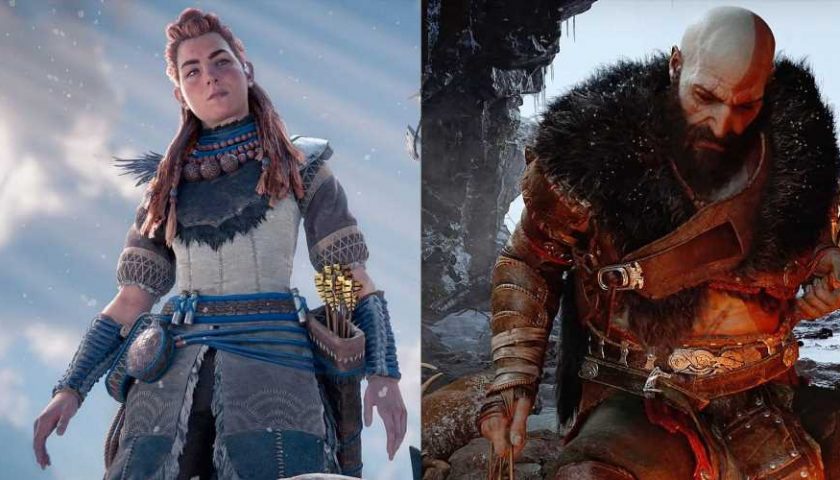 Horizon Forbidden West is already out and players sharing various secrets and Easter Eggs that they've found. Turns out, there are a bunch of God of War references that developer Guerrilla couldn't help but include in their latest open-world game.

There are three spots in total where you can find special wooden figures of God of War's characters in Forbidden West. Not only Kratos and Atreus totems can be spotted, but fellow dwarves Brok and Sindri too. To boot, finding all of them will grant a unique face paint for Aloy called 'Mark of War.'

The first one can be discovered in the hills north of Cliffwatch, east of the Greenhouse location. While traveling, Aloy may find Kratos's iconic Leviathan axe being thrust into the tree, although the weapon seems a bit more primal than you remember. Following the nearby tracks, players can discover the Spartan's wood cabin hidden in the mountains, where you'll get the first Totem of War.

You can also find Atreus's archery training grounds on the north end of the Isle of Spires, with plenty of arrows sticking out the trees. This discovery will grant you the Totem of Youth located nearby.

Finally, there are additional wooden figures of the two dwarven brothers, Brok and Sindri, remembered for their amusing dialogues and troubled relationships. The Totem of Brotherhood can be found in No Man's Land, shortly after Aloy discovers a destroyed machine lying nearby. When you collect all totems, you'll get unique face paint.

Horizon Forbidden West is off to a really strong start and has already become one of the biggest PS5 launches in the console's history. The game is currently the second fastest-selling game on the platform behind only Spider-Man: Miles Morales. If you wonder whether Kratos will return this year, there's some recent evidence that he actually will. According to an insider, Santa Monica won't delay God of War: Ragnarok into 2023, meaning the sequel will arrive only four years after the original.