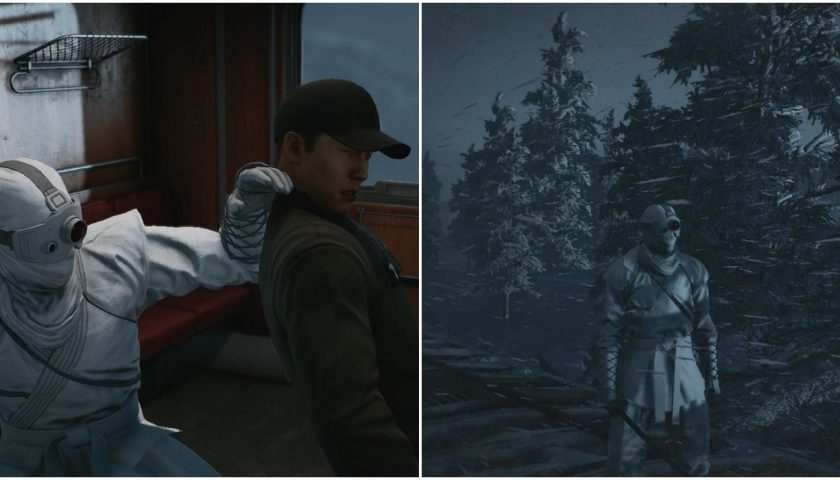 For many gamers, The Proloff Parable is the very last obstacle in the way of achieving 100% completion for Hitman 3. Obviously, as an escalation, it’s designed to be difficult, but it’s the final escalation in the game for those who play chronologically. It has a mechanic that makes it seem more like a Dark Souls game than a Hitman game just to throw you off balance.

The reward for mastering this wild ride is three pieces of equipment designed for ultimate arctic stealth: the White Shadow (outfit), the White Katana (melee blade), and the White Sieger 300 (sniper rifle). If this is the final challenge to cross off your list, follow this guide and let’s get you to that full completion, 47! 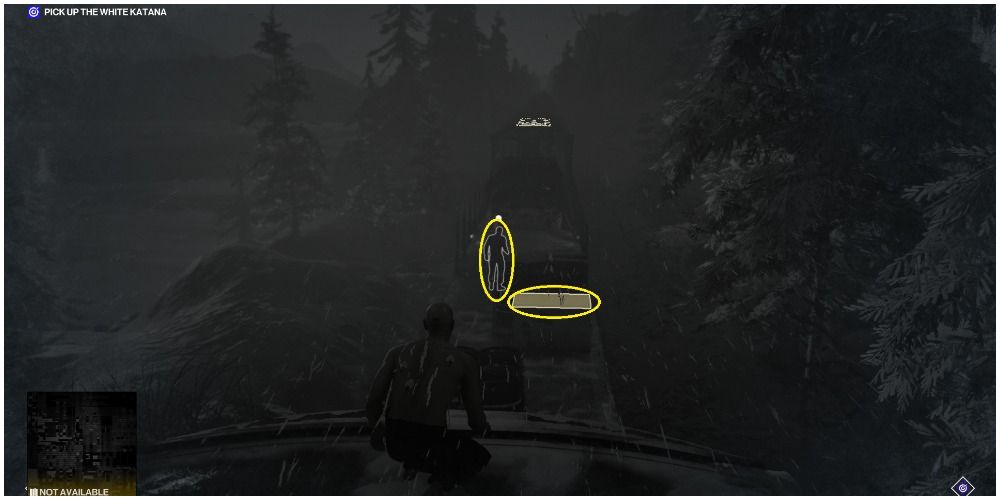 From your starting location, hop down, knock out this guard, take his outfit, and stuff him into the crate. He drops a key and a gun, you’ll want both of those as well. 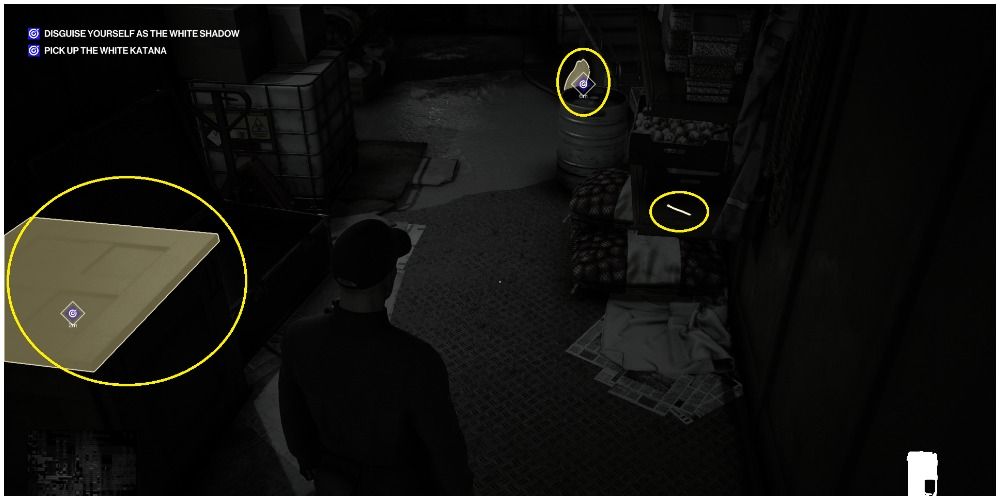 Turn around and go into the train car that you initially started on top of. Inside, you’ll find a rusty nail and the White Shadow suit as well as a locked box. 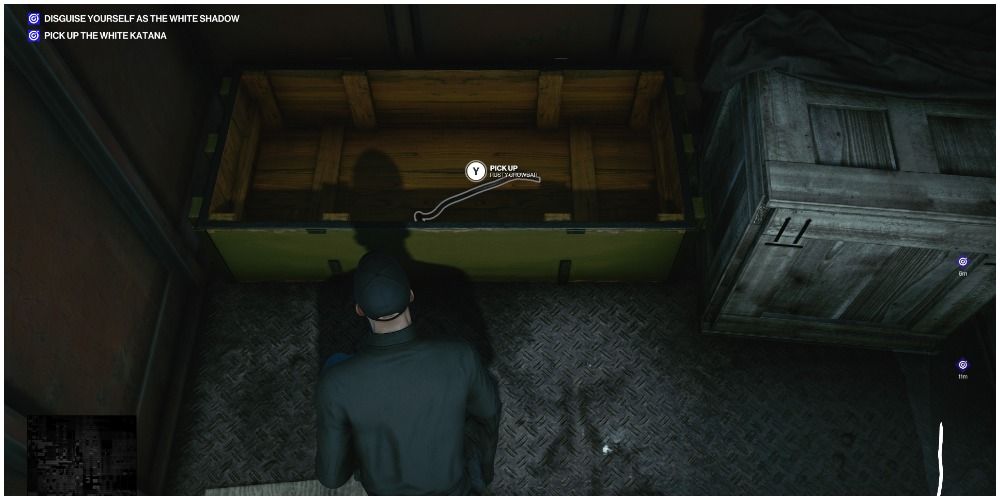 Jump through some boxes in the back and you’ll find the rusty crowbar for that locked box. Inside is the White Katana. Now you’re really cooking! 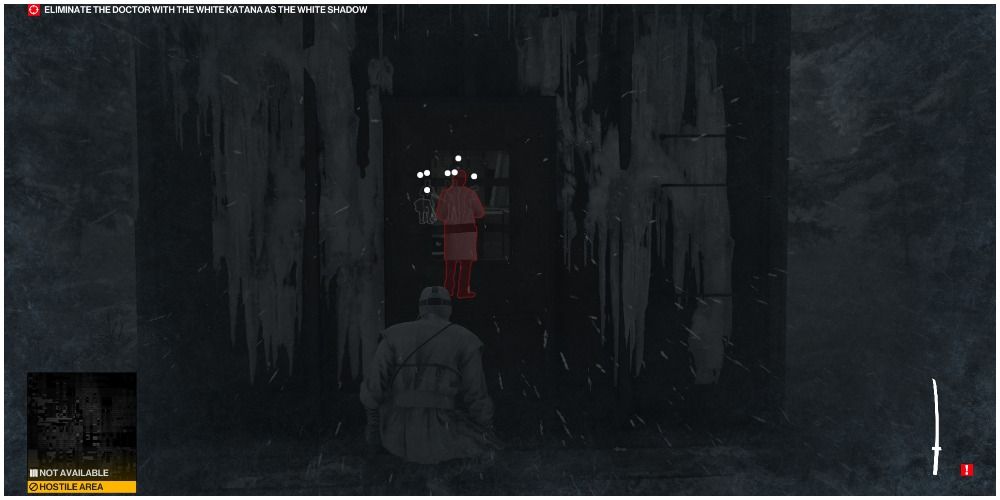 Use your instinct and you’ll find the doctor you need to kill nearby. Your rusty nail will get you into his train car. 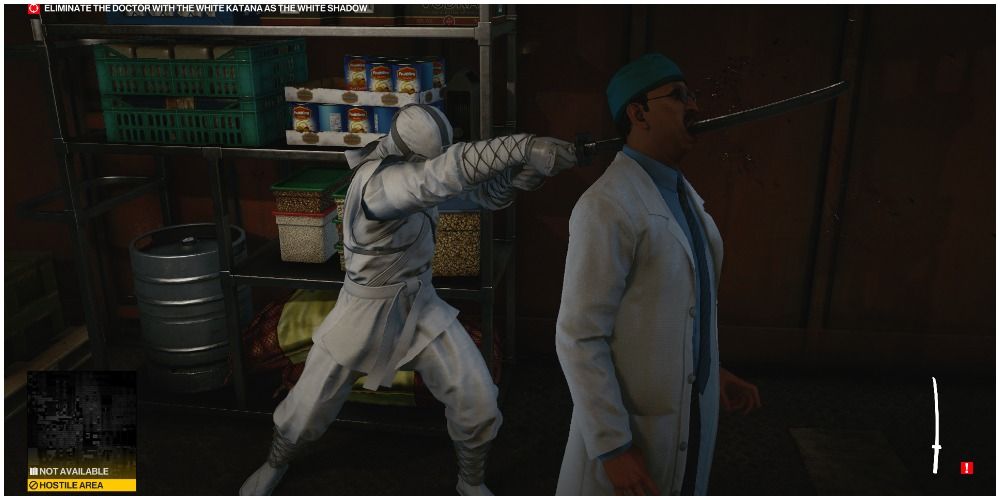 Give him a stealthy strike and you’ll be prompted to exit the mission. The exit location will be right in front of you. Easy level one, right? Buckle up for level two. 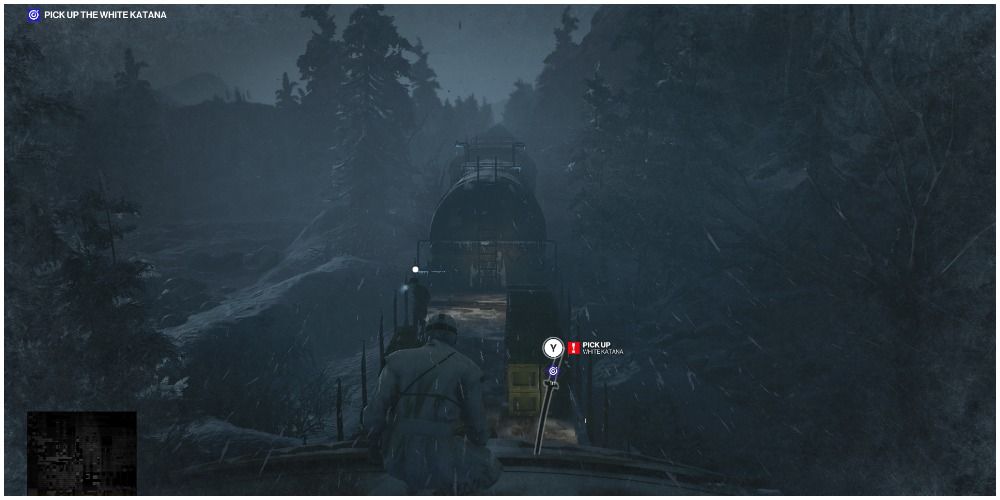 From your starting location, you’ll have the White Katana right next to you. As soon as you pick up the blade, you must kill an enemy with it every 20 seconds or you will fail the mission.

The first few train cars will be easy as you can eliminate targets without others taking notice and, when they do, you’ll be able to cut them down before they can take you out. 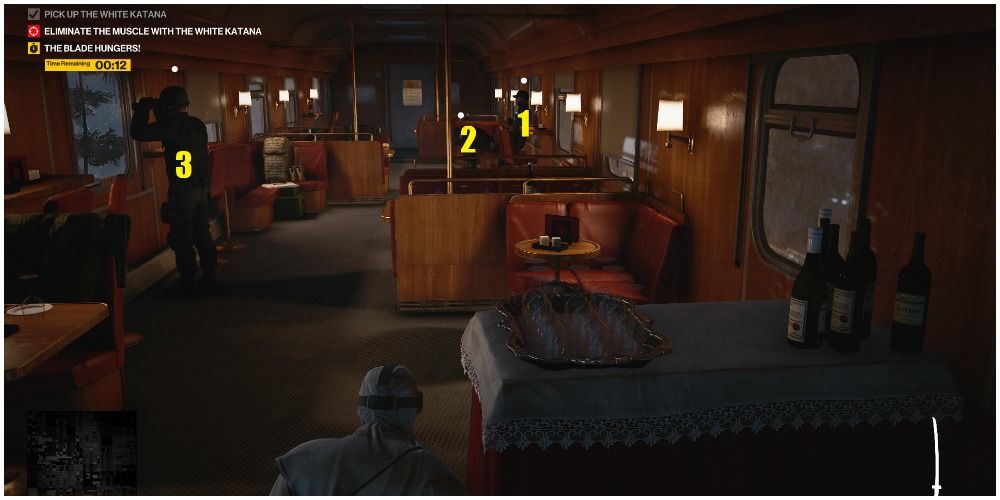 When you arrive at a car with three elite guards, take out the ones on the right side first. If you strike down the closest guard, the other two will open fire and likely kill you before reaching them whereas killing the other two first means you’ll only have the one final guard to deal with. 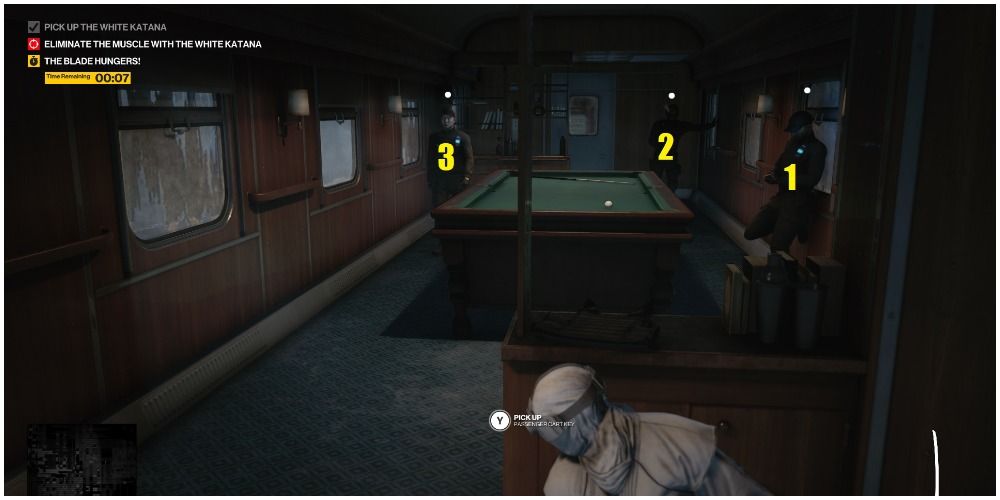 The same concept exists in the billiard room in the next car, take on the right guards first and deal with the left guard last. Don’t be afraid to throw your katana from cover if it gets to be a shootout. 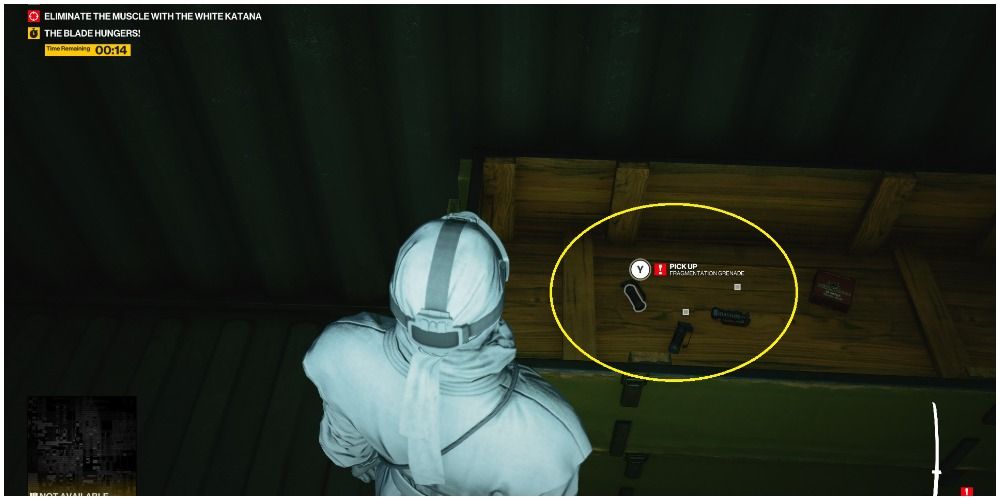 There are lots of weapons and distractions on this level. Most of them are worthless because, if you kill an enemy with any weapon other than the blade, the countdown will continue. However, it is recommended to pick up the fragmentation grenades on your right when you come across them. The next area has loads of guards and you’ll want to thin out their numbers if you get overwhelmed. 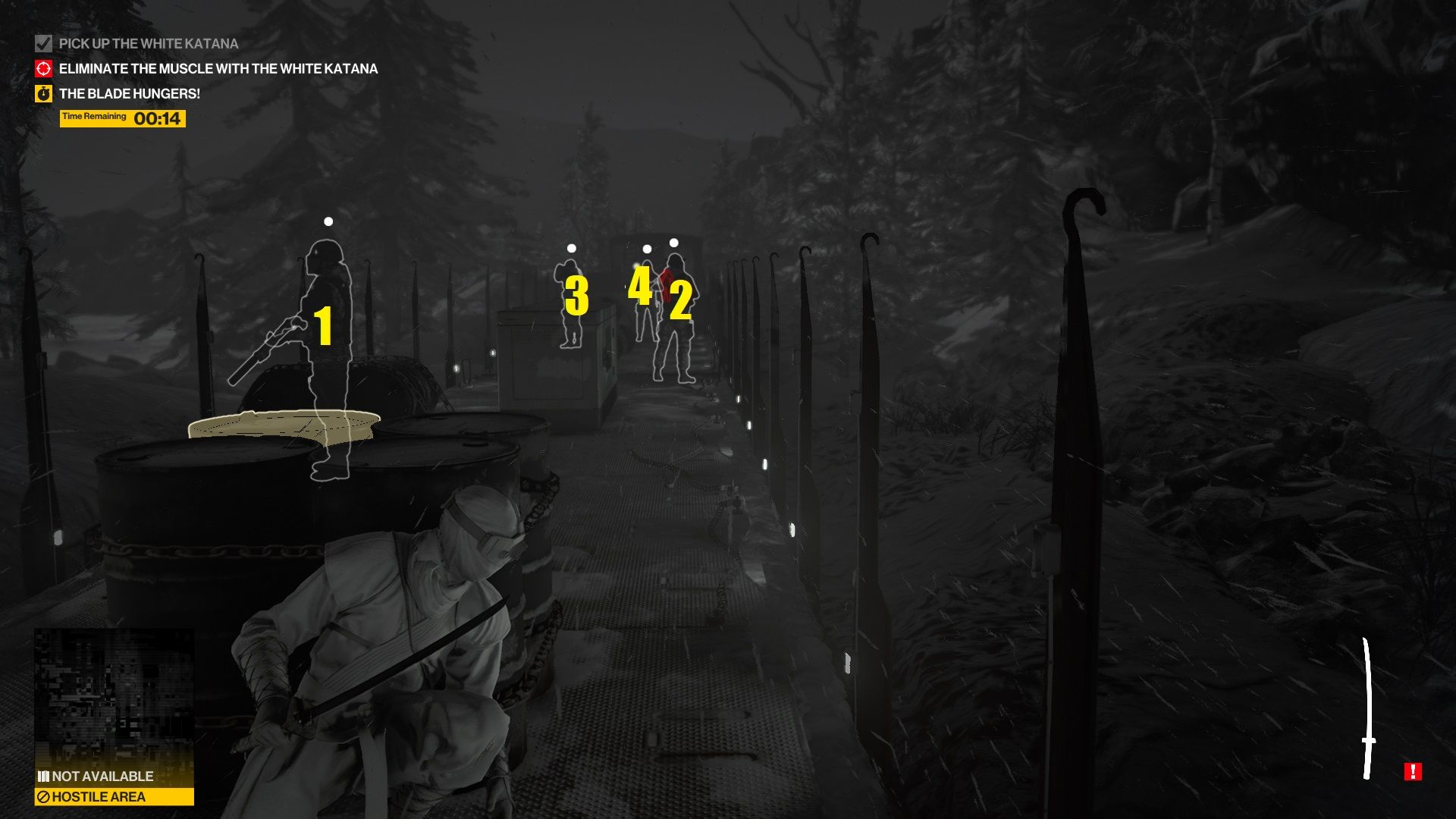 While it’s usually unwise to wait with a twenty-second timer is counting down, you will want to wait for the second guard to patrol away before stabbing the first in the back. If the other three start firing, use a fragmentation grenade to take out a few. 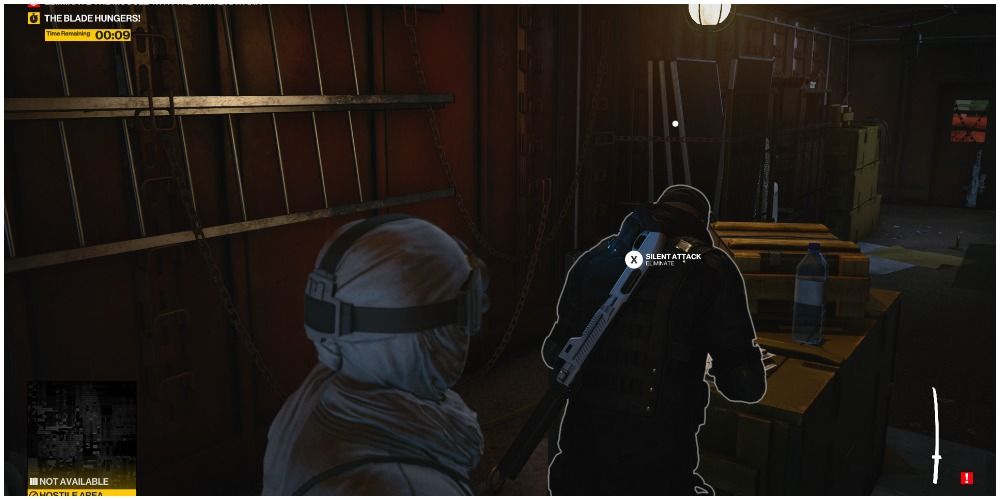 The muscle is dutifully working and you’ll be able to sneak up on him easily, he doesn’t turn around even if things have gotten violent outside. Killing him will stop the timer so you get a chance to breathe. 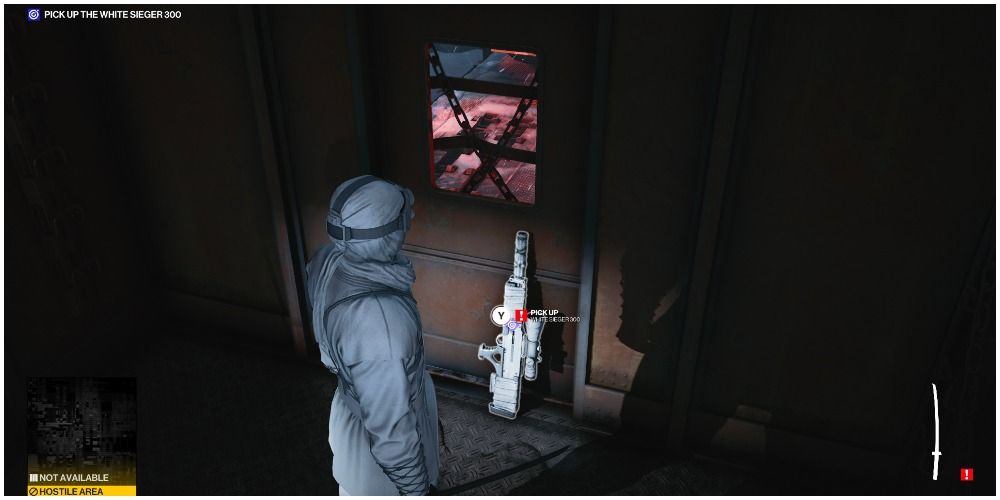 After the muscle has been eliminated, you’ll be prompted to pick up the White Sieger 300 which is leaning against the back of this same train car. 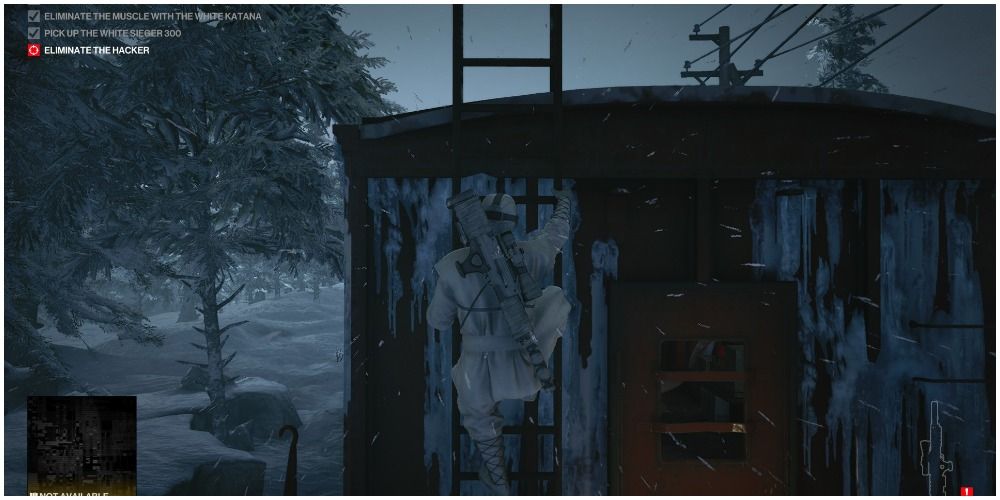 Now your objective will be to take out the hacker. The door to him is locked, so you’ll need to backtrack and use the ladder to climb over the car you were just in. 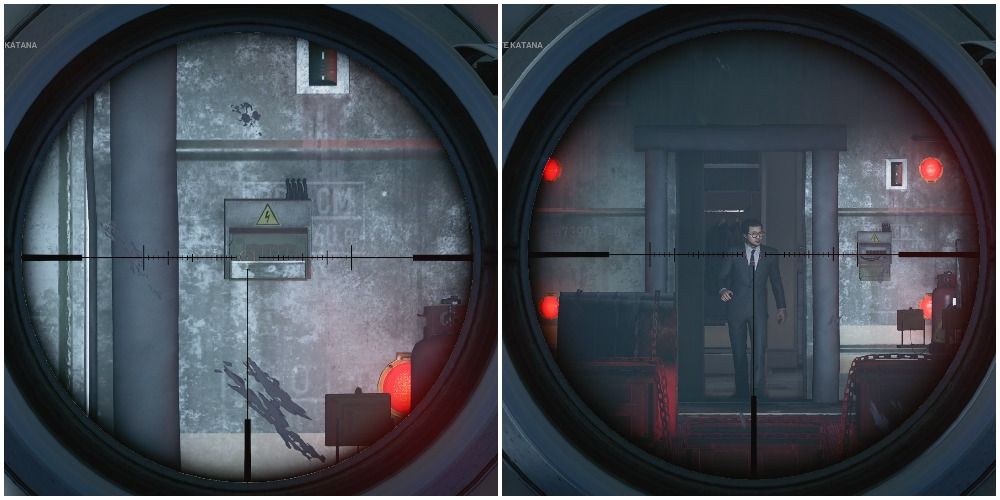 From here, you’ll be able to snipe a panel on the right side of the door. The hacker will go out to investigate and you’ll have an unpleasant surprise waiting for him. Killing him reveals the exit which is the train car he came out of. Leave and it’s on to the final leg of the journey!

You’re going to go from loud and proud to quiet as a mouse. It’s tough to do in an outfit that everyone recognizes as an enemy, but it’s possible when you know the right hiding spots. 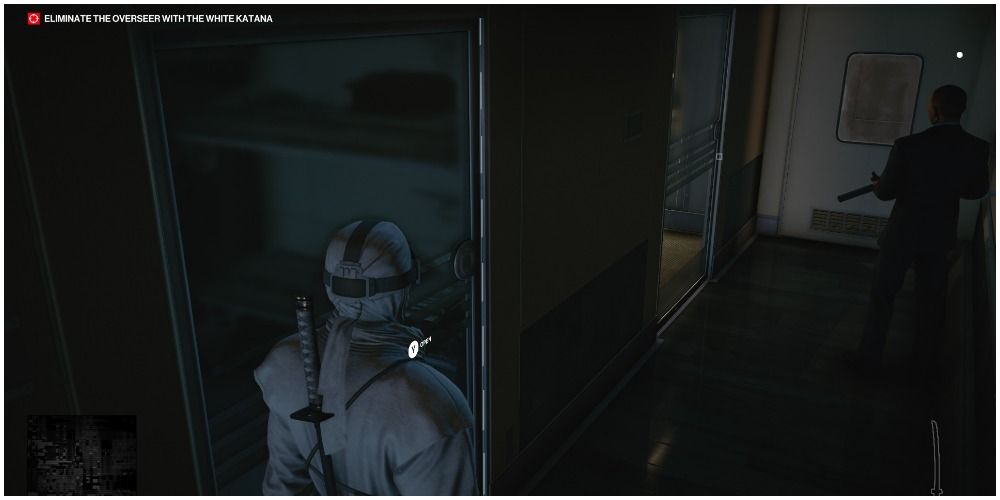 You’ll begin with a guard patrolling in front of you. As he moves away, open and enter the third room on the left, then shut the door. After he patrols back, open and continue to the next car. 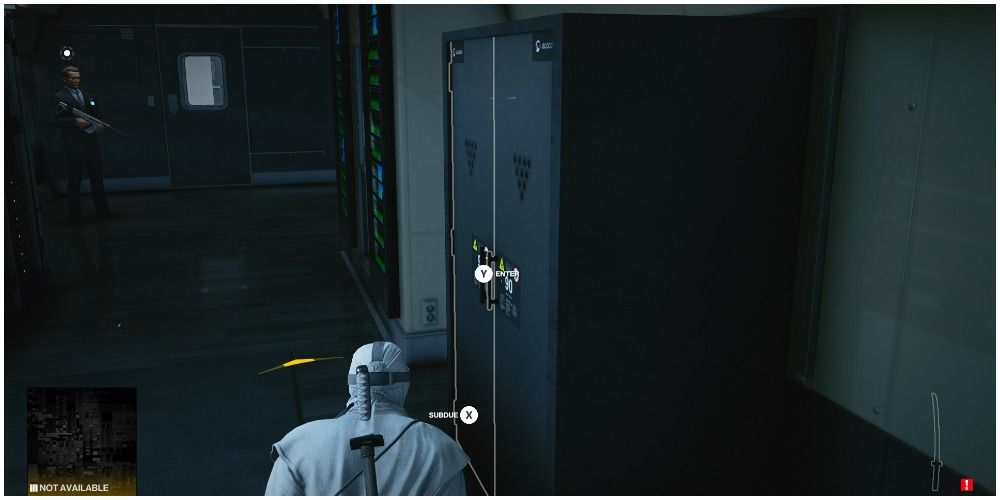 The concept in the next car is the same, wait for the guard to patrol away, jump into the locker on the right, then as he moves forward, exit and press on. 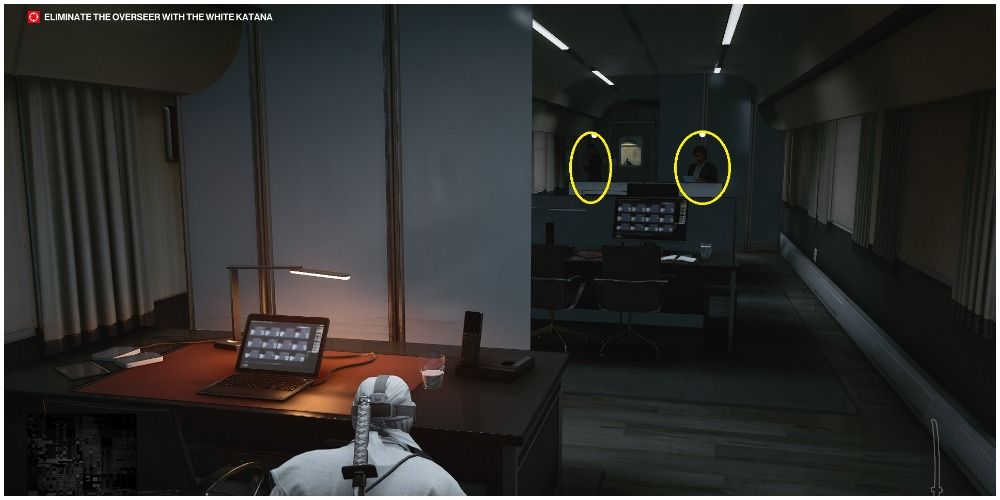 There are two passengers in this third car. The woman will move to the left and, as she does so, you should move to the right to block her line of sight. Move quickly to leave and the man won’t turn around from looking out of the window until you’re already out. 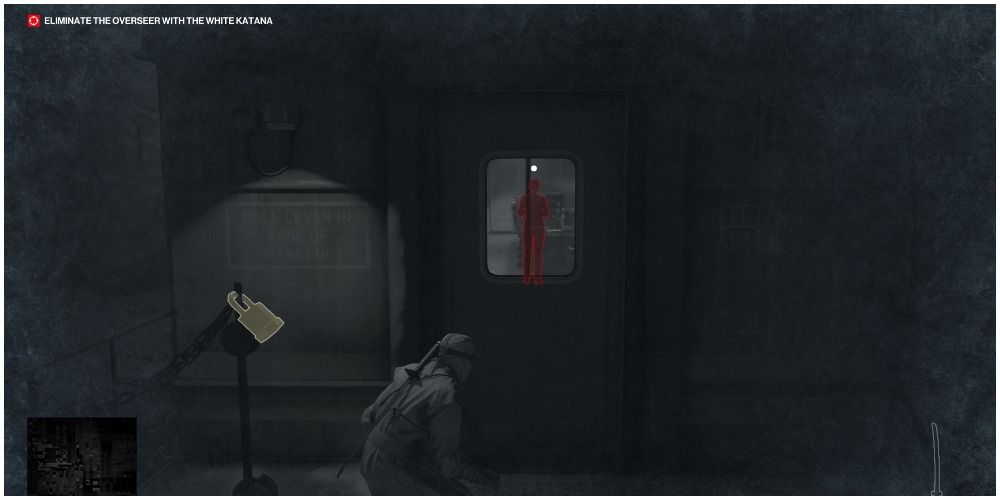 Do not enter the next car until the overseer has her back turned to you. Use your instinct to find the perfect moment. Then enter and strike her down from behind. 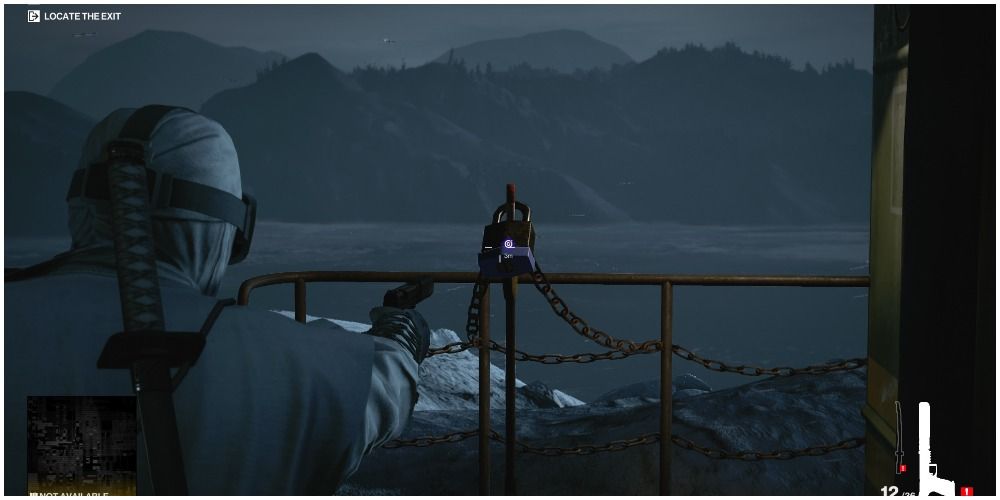 Pick up her silenced pistol, go back out of the door you entered from, and shoot the lock on the lever to reveal the exit. Pull the lever and you’re done!

Congratulations on the new gear! Nobody pulls off white after Labor Day quite like you do, 47.

NEXT: Hitman 3: 10 Things That The Series Can Do Now That The World Of Assassination Trilogy Is Over 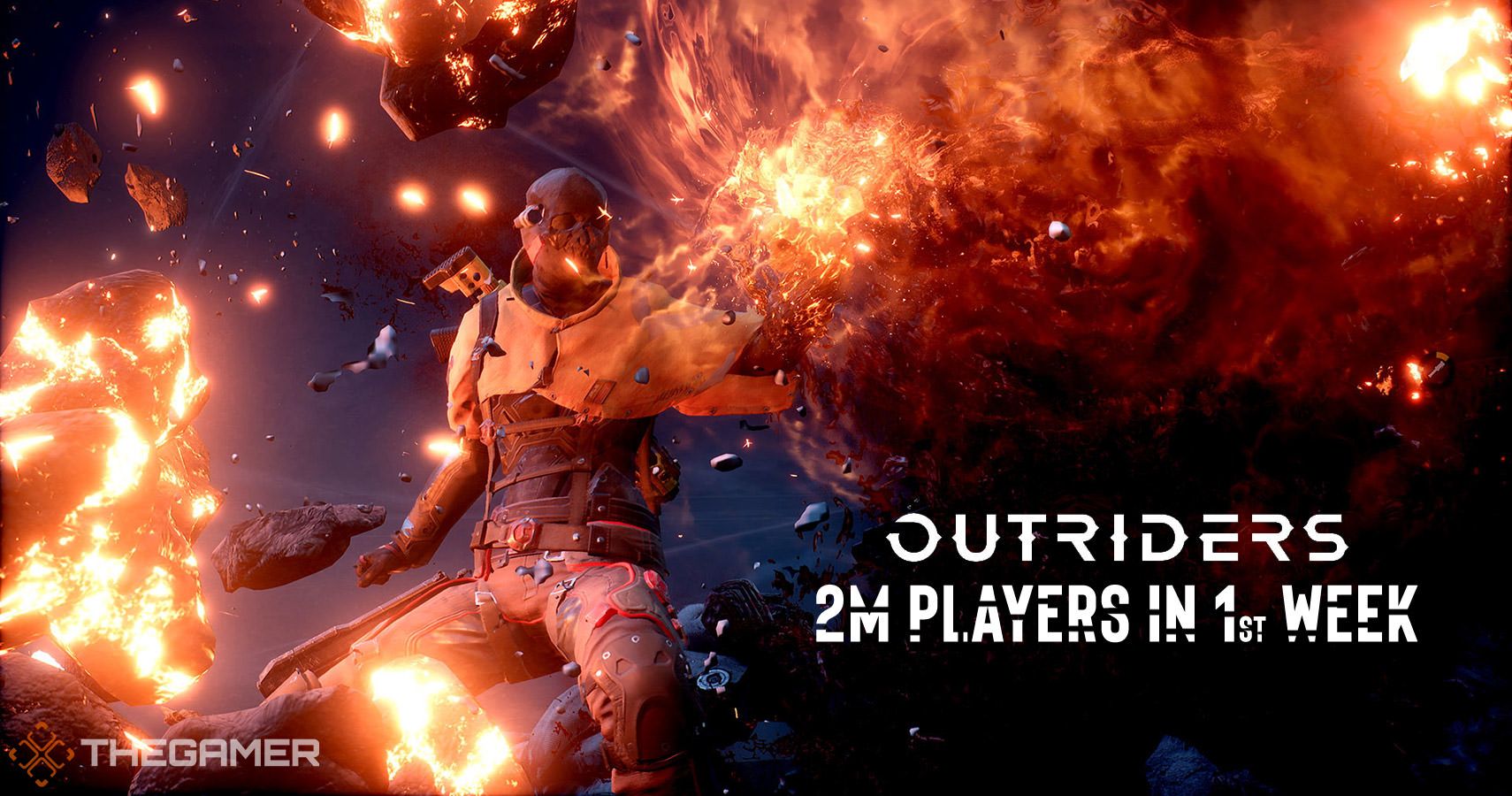