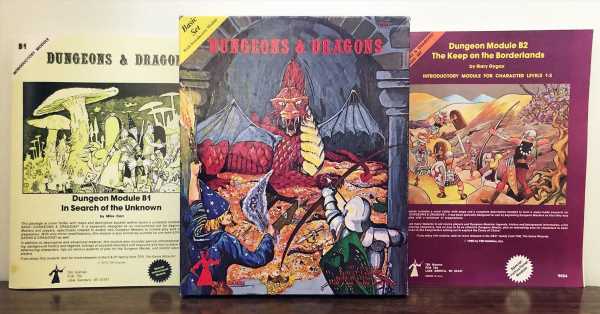 In Game Wizards: The Epic Battle for Dungeons & Dragons, historian Jon Peterson hopes to lay to rest the rumors and speculation that have plagued the early history of D&D. At the center of this new book is the feud between co-creators Dave Arneson and Gary Gygax. His work relies on a treasure trove of firsthand interviews and primary documentation, as well as remnants from the lost archives of D&D’s original publisher, TSR.

Polygon sat down with the author to discuss his work, and to ponder what the original role-playing game might look like today if things had gone differently.

Peterson is the co-author of several books, including the New York Times best-selling Heroes Feast: The Official Dungeons & Dragons Cookbook and the Hugo-nominated Art & Arcana, a lavish visual history of D&D. But before those more mainstream successes, Peterson was best known for 2012’s Playing at the World, a seminal work in the modern study of tabletop gaming that goes back to its late-18th-century roots.

For Game Wizards, Peterson’s journey began in 2014 on Medium with a story titled The Ambush at Sheridan Springs. In it, he tells the gripping tale of the final push to oust Gary Gygax from his role as leader of the company he helped found.

“That was my initial look at mechanically how it was Gary lost access to the company,” Peterson said in an interview with Polygon. Game Wizards includes that story and many others, all drawn from the turbulent early history of D&D. “In the intervening seven years that I’ve been working on this, I get stuff from wherever I can. From private collections, sometimes people are selling things on Facebook or on eBay, that I can pick up […] and a lot of the private correspondence that Gary had with people.”

A handwritten accounting, by Gary Gygax, of royalties due from Dungeons & Dragons’ first quarter sales in 1974.
Image: Jon Peterson

One of the most unusual documents that Peterson uncovered in his research is the original ledger for the first-quarter sales of D&D in 1974. Written in pencil on a plain white sheet of paper, it shows that the initial royalties from the game’s first printing was just $106.40. Split two ways between its creators, that amounted to just $53.20 each.

“When this started, this was not going to make anybody any money,” Peterson said with a laugh. “It’s an interesting […] rags-to-riches to, if not rags, at least to budget attire.”

Arneson only received $52.90 on account of the cost of a stamp and a money order needed to mail him his share. It might only be 30 cents, but it’s early evidence of the kinds of petty slights and oversights that would eventually grow to bring the whole company down.

“In the past few decades there have been people who have volunteered that perhaps Gary Gygax did all the work on D&D,” Peterson said. “Or perhaps Dave Arneson did the work on D&D; or how Dave Arneson was being cheated on royalties; and what exactly the substance of his lawsuit was with TSR. A lot of these things were said long after the fact, and they were colored by all kinds of factors, [including] the vagaries of memory. They were [also] colored by long-standing animosity that had been festering for so many years, and this is my attempt to really penetrate that.”

The publication of Game Wizards marks the 36th anniversary of the so-called Ambush at Sheridan Springs, where on Oct. 22, 1985, Gygax lost control of D&D forever. Polygon asked Peterson what the game might look like today if he had somehow managed to retain control. He pointed to the work of Lorraine Williams, the woman who would replace Gygax following his ouster.

In 1985 the Dragonlance project was already in full swing. It comprised a series of novels, adventures and other ancillary products. Peterson sees it as one of the first true examples of a modern transmedia approach.

“That was the place that business was growing,” Peterson said. “So Lorraine leaned in very heavily on that. ‘Find me another one of those. Find the design staff, shake them by the lapels. Find more of those!’” It’s that quest for the next Dragonlance that ultimately led to the discovery of the Forgotten Realms, an expansive world created by Ed Greenwood where the majority of published D&D novels and adventure modules take place today.

Of course, it also gave birth to an early computer game called Pool of Radiance. Published in 1988, it was the first adaptation of D&D for the home computer.

“That really went on to change the way people thought about CRPGs, and really the strategy of what it was to be a tabletop company,” Peterson said. “Gary was always very disparaging towards the computer gaming dimension of this. He felt it lacked the real-time interaction that made role-playing games what they were. There’s the degree to which we’d all concede that there’s some some truth in that, but under him I don’t think we would have seen the same push.”

Game Wizards: The Epic Battle for Dungeons & Dragons comes out on Oct. 12. Pre-orders are currently available online and at your local bookstore. Polygon will have an exclusive outtake from the book next week.