It’s the latest way that Apple is luring gamers to its $5 a month subscription service, and it’s will test whether its steady drip, drip, drip of high-quality mobile games will help drive a new business model for games. The Apple Arcade title is available on the iPhone, iPad, Macs, and Apple TV.

Crossy Road Castle is a co-op retro game that is a sequel to Crossy Road, one of the most popular mobile games of all time with well over 200 million downloads. The title is a bit like New Super Mario Bros., with classic Crossy Road characters instead. This is the first time that Hipster Whale has returned to the original characters of Crossy Road, said Clara Reeves, CEO of Hipster Whale, in an interview with GamesBeat. 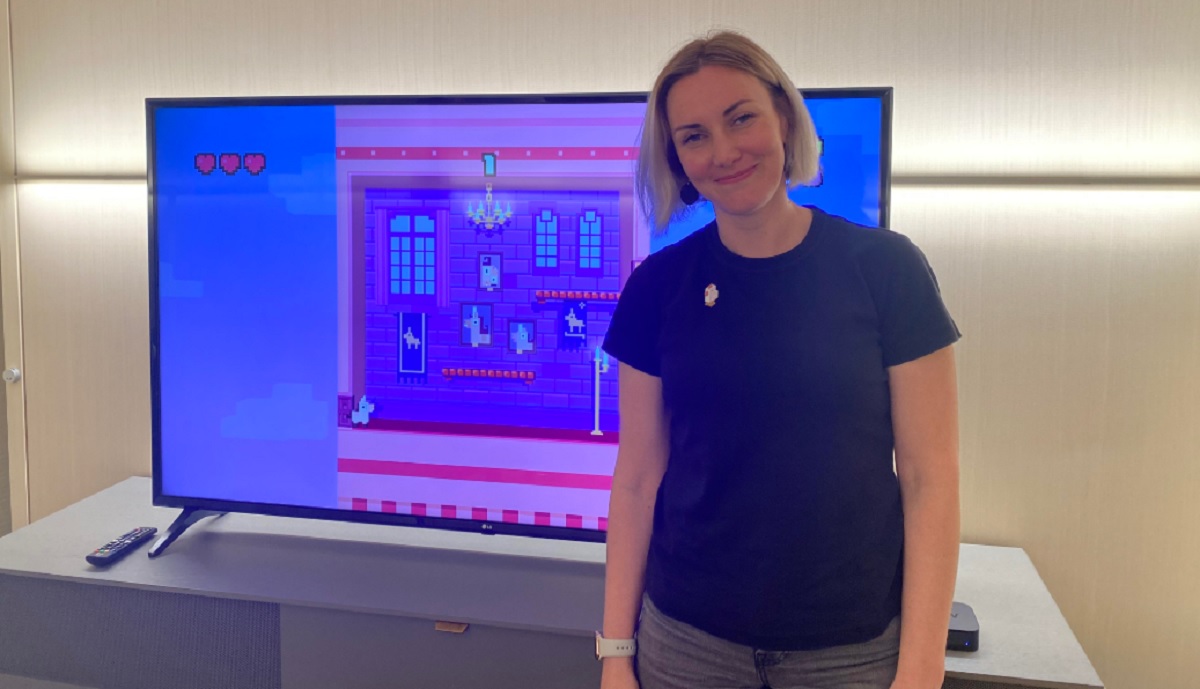 Above: Clara Reeves is CEO of Hipster Whale in Melbourne.

“What people think about with Crossy Road is its bright characters, intuitiveness, easy to play, and touch controls,” Reeves said. “We still have a really huge player base. And this is the first time that we are bringing the original Crossy Road characters into a new game. As a mother and a gamer, I wanted to play a game we could play across generations.”

Apple Arcade has more than 100 games available, and Cross Road Castle is one of many family-friendly games on the service. The original Crossy Road debuted in 2014 as a Frogger clone that was better and more timely than rival Frogger mobile games. Apple Arcade already has a Frogger in Toy Town game, but Crossy Road Castle isn’t similar in gameplay.

“A lot of us have these memories of playing like old arcade games,” Reeves said. “So you go to the arcade and you crowd around an arcade machine and the interactions that you have with each other are just as important as the interactions you have with the game itself. I want my four-year-old, my eight-year-old me and my dad to be able to play this game and be having a good time at the same.” 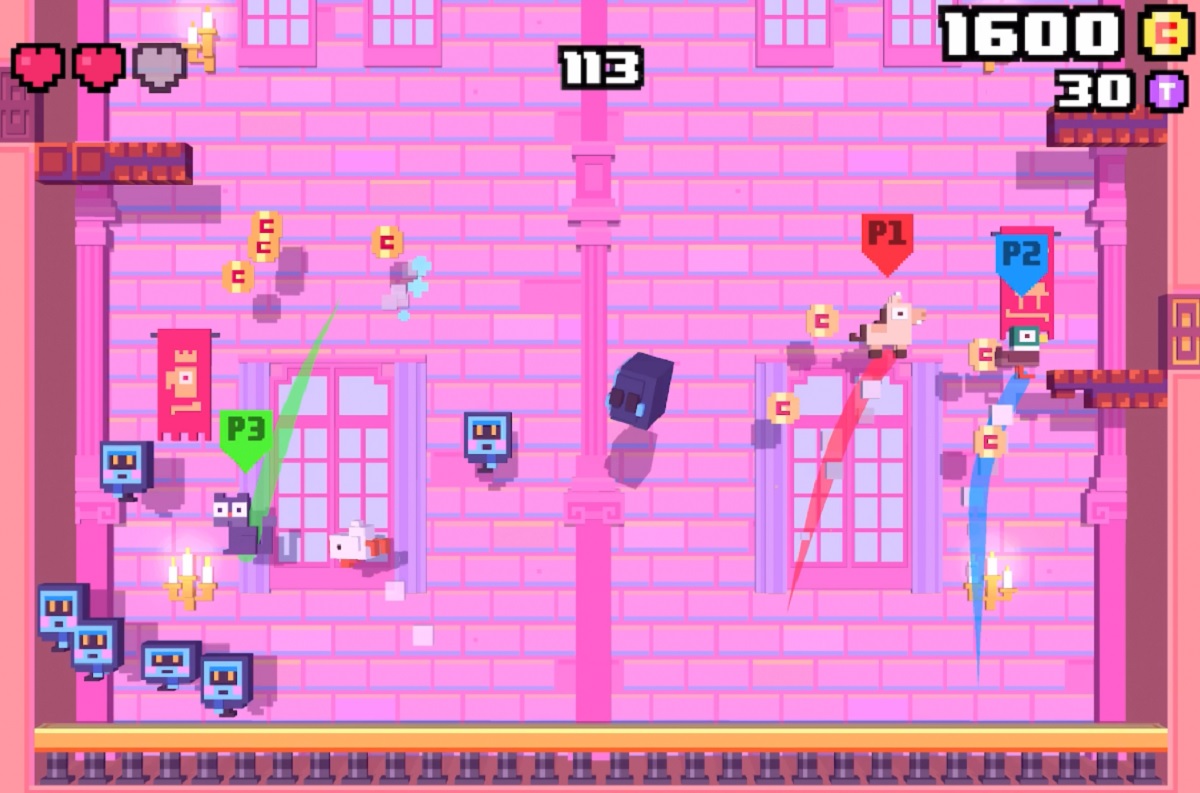 It definitely sounds like an arcade game, with plenty of beeps and noises.

I played a few levels of Crossy Road Castle in multiplayer mode with Reeves. We sat on a couch and played it on an bigscreen TV via Apple TV. The three of us each controlled a character rendered in the classic 8-bit “voxel” style, running across two-dimensional levels. It was the first time I had played the game, but it was pretty intuitive moving left, right or jumping up and down. You have to avoid running into jaw-like teeth that protrude from various walls throughout the colorful levels.

Like with New Super Mario Bros., if one of you makes it through the level and the other three die, you all move on to the next level. Each room is pretty short, but it takes some skill to get through each section. We played with Xbox game controllers, which connect via Bluetooth wireless connections to the Apple devices. You can bring together a party with multiple controllers on the same Wi-Fi network.

You can play as a cat, a duck, a chicken, or a horse. It’s as accessible a game as you’ll find on any game platform.

“We are focused on making like bright and fun and easy, accessible games that have wide appeal and that bring people together,” Reeves said. “Through development, the focus that evolved was that part about bringing people together. Unfortunately, when people think about games, they often think of them as antisocial things, which of course is not true. When you play games with people you really know, like friends and family, that’s a real social interaction that you’re having there. And games have this power to be a really positive social interaction, and we wanted to focus on that.” 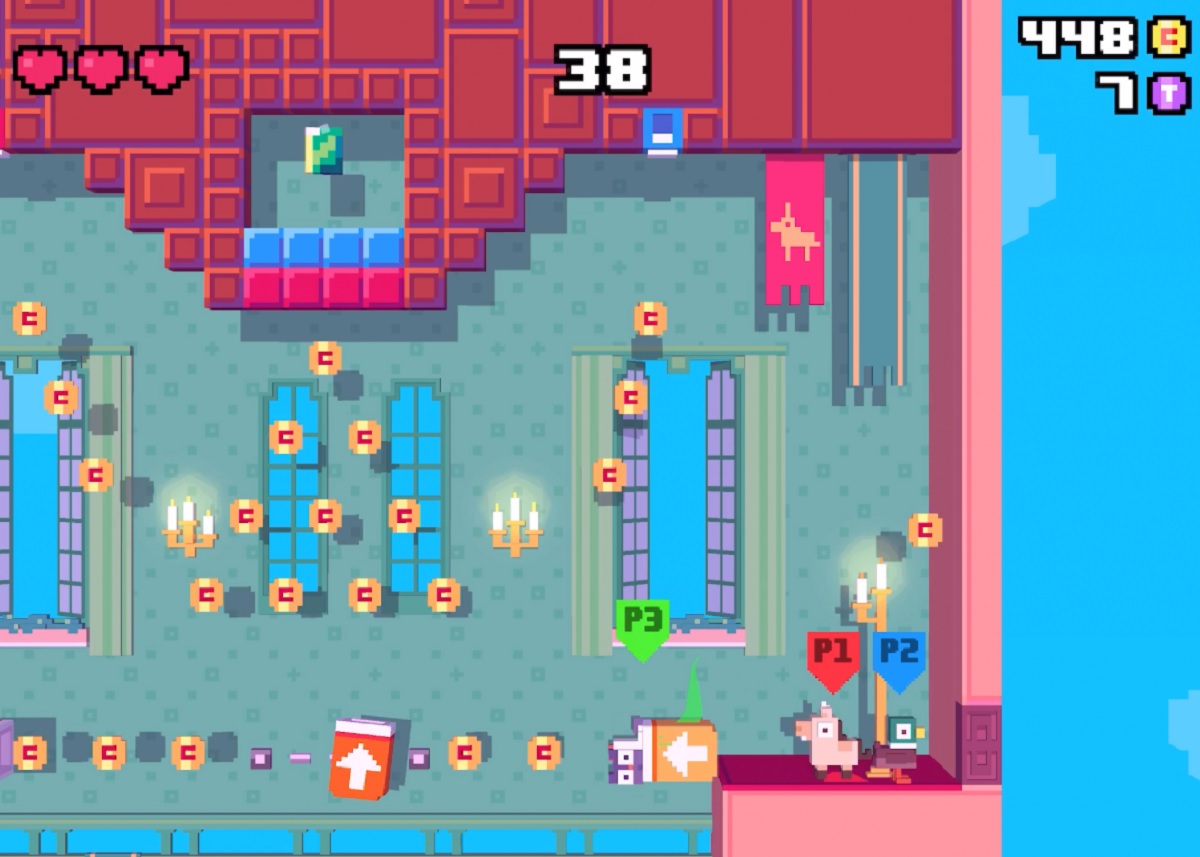 Above: The tone of this game makes it a Crossy Road title.

I liked a level where you were shot out of a cannon at another cannon, and had to make your way across the level by making sure you were shot into the next cannon. I was a bit lacking in the skills department, so Reeves often cleared the level before I did. But I got the benefit of being pulled along after she cleared it. We had a lot of laughs and chatter while we were playing.

In a way, the levels can be really difficult. You don’t get a break when you die. So you have to hope that one of your party of four makes it across and pulls the rest of you along. You can collect a lot of coins and other special collectibles, as well as secrets. That makes it all replayable.

“It’s a light-hearted game that anyone can play, but it has a depth underneath it for people who want that,” Reeves said.

It’s a pretty polished game, based on the short preview I saw. And it’s pretty good for a team of just 11 people that worked on it for 12 months.

“We’re a very small company, but we don’t have a lot of pressure to publish right away,” Reeves said. “We’re in a very fortunate position that way.”