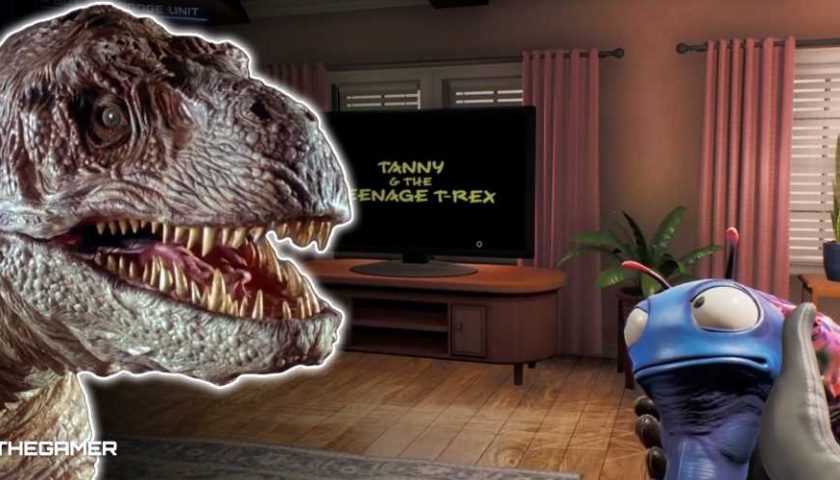 High on Life is out today, and players are making some important discoveries. A lot of them are technical glitches that'll surely get sorted out in the next few days (or weeks), but even more seem to be discovering Tammy and the T-Rex, a sci-fi horror film that plays in its entirety on the living room TV.

For those who weren't around for the 1994 cult classic, Tammy and the T-Rex stars Denise Richards as a high school student madly in love with her boyfriend Michael, played by the late great Paul Walker. Through an unfortunate series of events, a mad scientist extracts Michael's brain and implants it inside a robot Tyrannosaurus Rex, apparently having gotten it on loan from Jurassic Park a year after the iconic dinosaur blockbuster made movie history. It's sort of a parody, sort of, but it's mostly just bizarre campy fun.

Unfortunately, the movie doesn't use the animatronic T-rex nearly as well as Jurassic Park, which resulted in Tammy and the T-Rex receiving just 43 percent on Rotten Tomatoes. But it somehow remained popular enough for an un-rated version to be re-released in 2019, which fans adore. Perhaps Justin Roiland is one of those fans.

You can watch the whole movie in the living room and there's even a sofa to sit on. Note that watching the entire movie doesn't appear to be tied to any achievements, so only keep watching if you're actually enjoying yourself. There are also some commercial breaks, but don't let the talking aliens put you off from watching Michael eat his way to revenge on his old high school.

Some people are reporting the screen going black after a few minutes, which could be a bug. If so, you can leave and come back, but others are reporting the movie restarting if you do. Might be best to wait for a few patches to see if this gets fixed.

Watching Tammy and the T-Rex will definitely pad your time in High on Life, which is reportedly only eight to 20 hours long, depending on how much of a completionist you are. Expect a linear story and some Rick & Morty-style humor, although the game isn't actually related to the show at all.