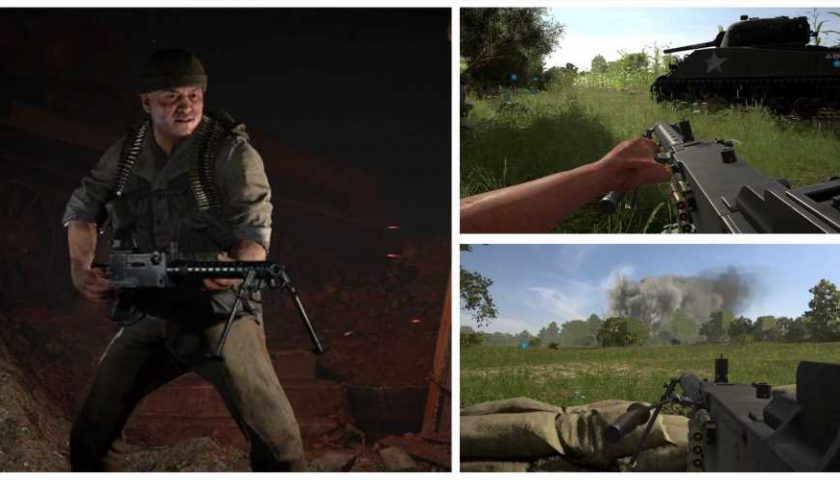 The Machine Gunner Class in Hell Let Loose is a ton of fun if you use it in the right way. These large weapon-carrying lads can absolutely dominate the battlefield in the right hands and in the perfect spot.

Capable of suppressing and shredding huge waves of soldiers, the Machine Gunner is a dependable and reliable role in the game. It’s a fairly easy position to get to grips with, but it’s how you use it that alters its effectiveness to the overall war effort. So to help improve those MG skills, here’s a guide to the Machine Gunner Class in Hell Let Loose. 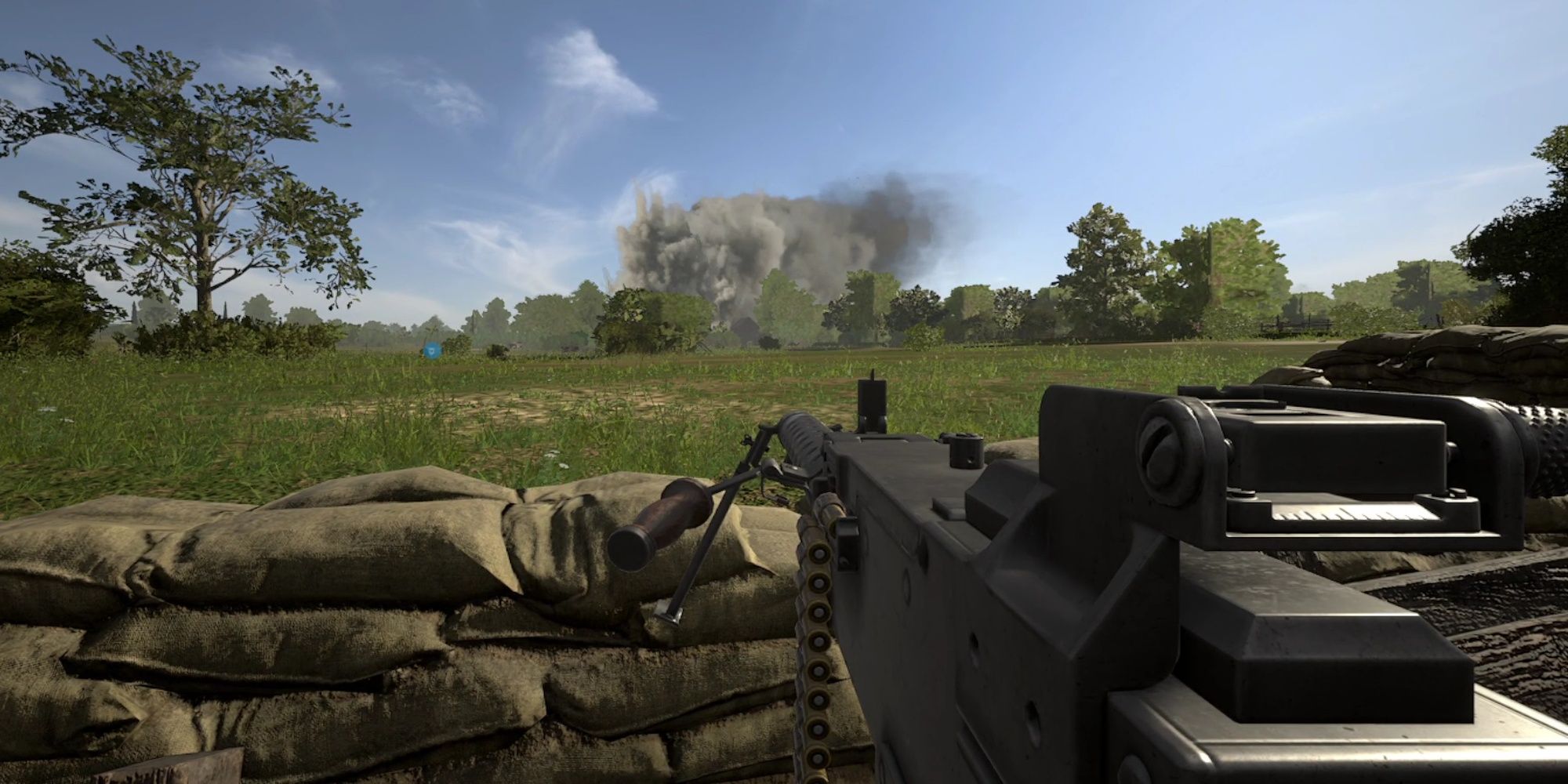 Whilst most of the other classes are built for assaulting positions or taking part in big wave charges, the Machine Gunner is more of a defensive role. Their big MGs can put out a lot of rounds and have two modes of fire. The first is the Mounted mode, which rests it on a wall and uses iron sights. Perfect for dousing entire enemy battalions in bullets. The other mode is a rough hip-fire, which grasps the weapons handle and lets out a wild spray.

Although it’s good for firing down corridors or layering bullets into hedgerows up close, they’re best used further back from the frontline, covering defenses. Or, with the biggest part of the attacking wave, taking up suppressing positions to help the team move deeper into enemy territory. The reason they’re best used defensively is that it takes a few brief seconds to ready their weapon when it’s not in the Mounted Position on a wall. Ample enough time for someone to get the drop on you. 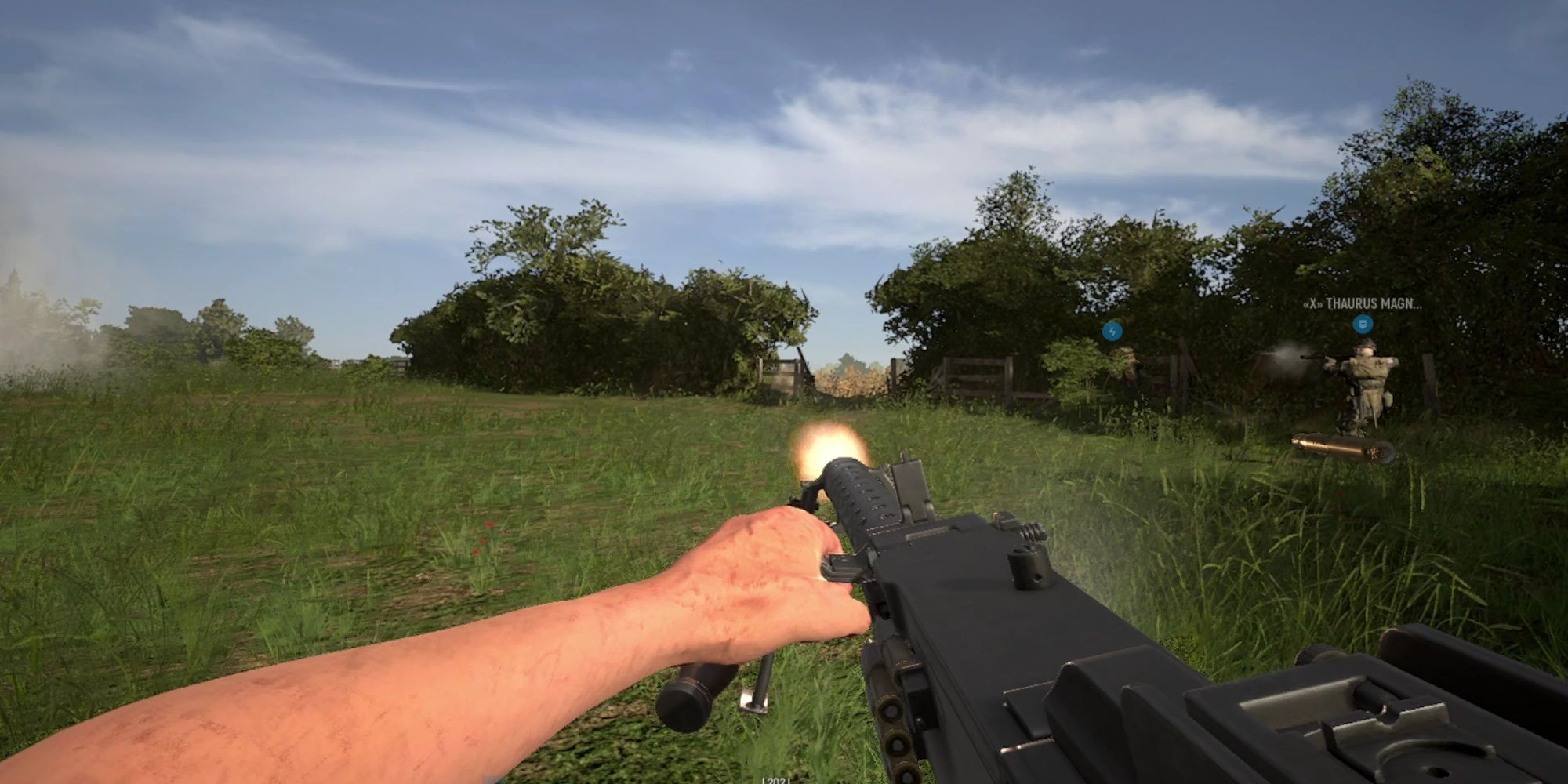 Each Machine Gunner role per faction has access to multiple different MG loadouts, so there are plenty of big guns to play with. They all handle relatively differently and some are arguably better than others. Here's a brief rundown of what each faction has for their Machine Gunner kits. 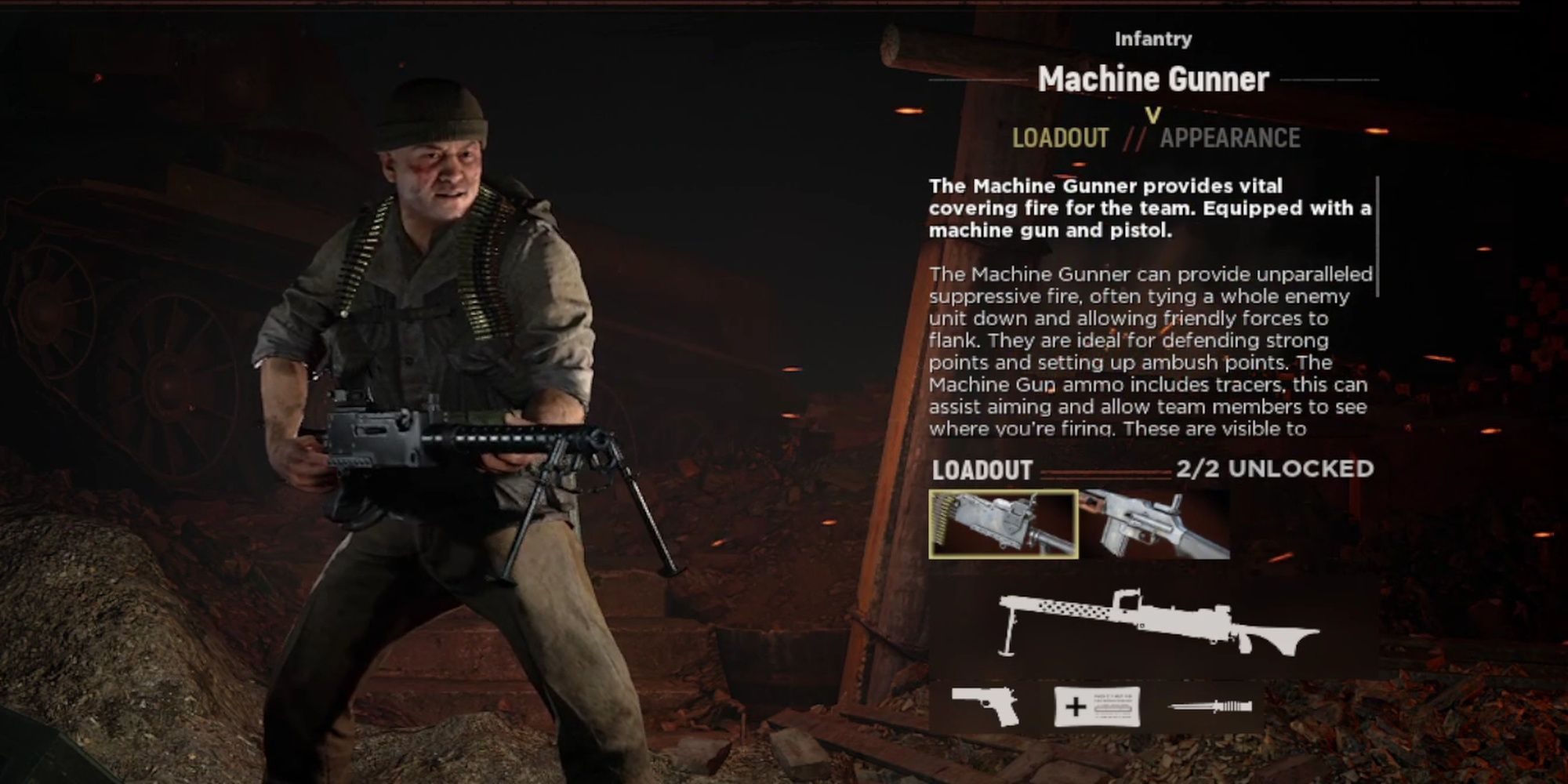 For example, the Browning 50.cal, the starting MG for the US is their best option as it has the most rounds and is incredibly accurate. But after a few levels you can access the Fire Support loadout which comes with a BAR and a couple of extra rounds. Though it has a smaller magazine size, it's much more portable and easy to hip fire with for the MG class. 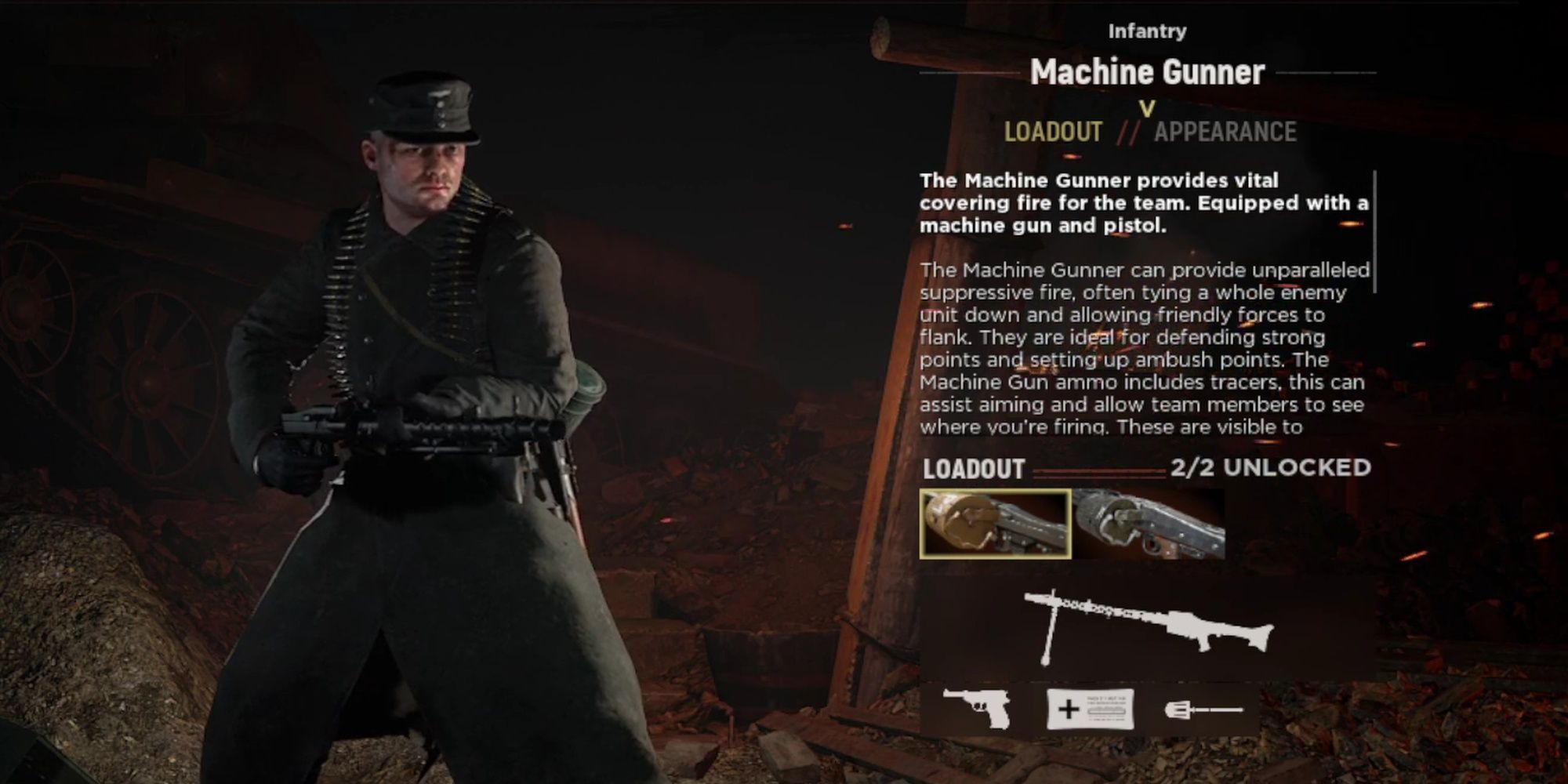 The Axis on the other hand have an MG34 and a large number of replacement mags to begin with. It's not as strong as the US's Browning, but after a few levels you can unlock the larger MG42. This is the best weapon for the Machine Gunner. It sprays out a ridiculous amount of rounds, hits incredibly hard, and is terrifying to be suppressed by. 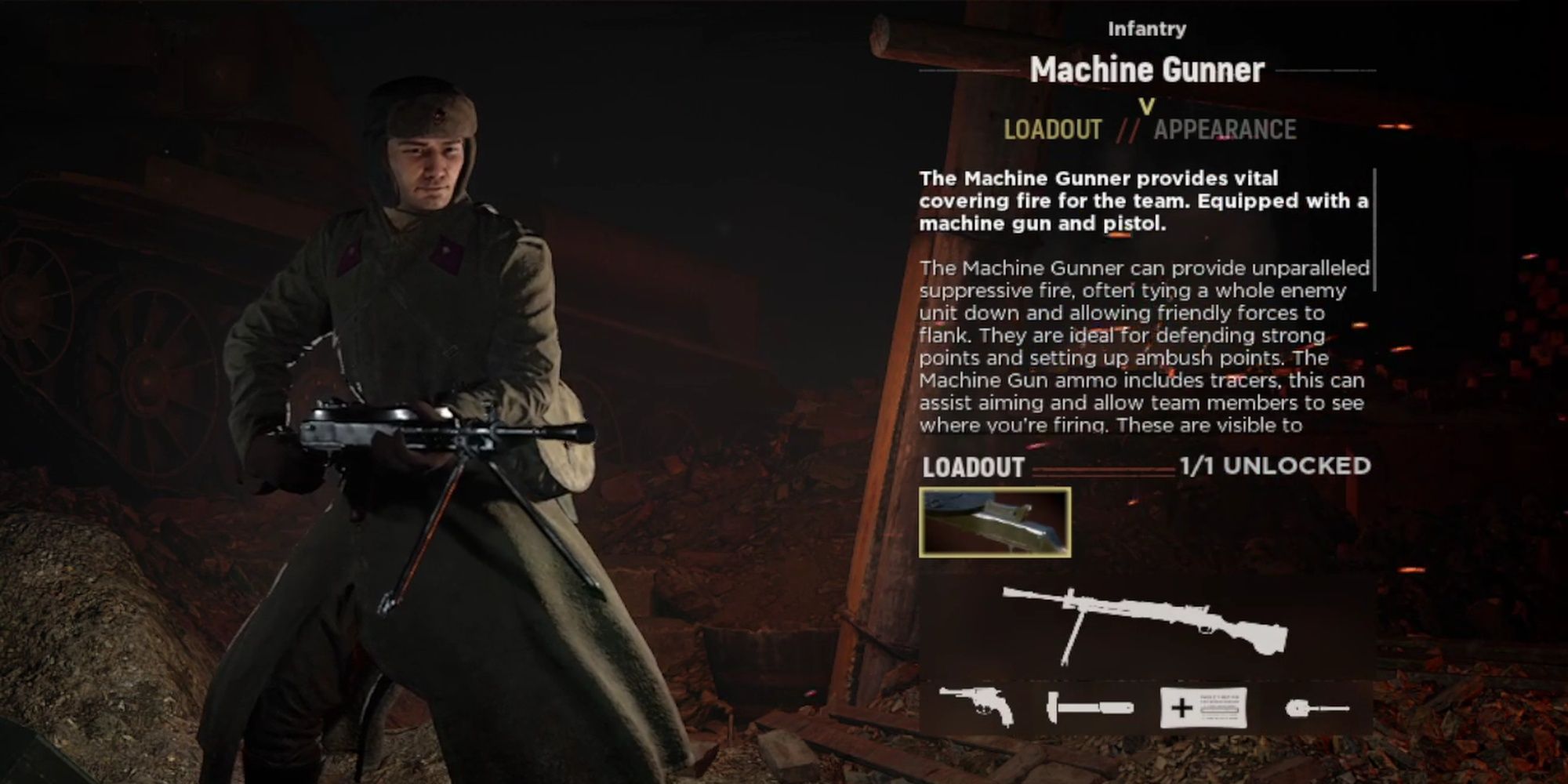 Finally, the Soviet Union by comparison only has access to one weapon and loadout type for their Machine Gunner. Whilst a little disappointing, it does provide the very trusty and reliable DP-27. Though it may not be as large in the ammo department, it's very accurate and has a low firing profile which makes it pretty hard to pinpoint. So experiment with which heavy gun is the best for you. 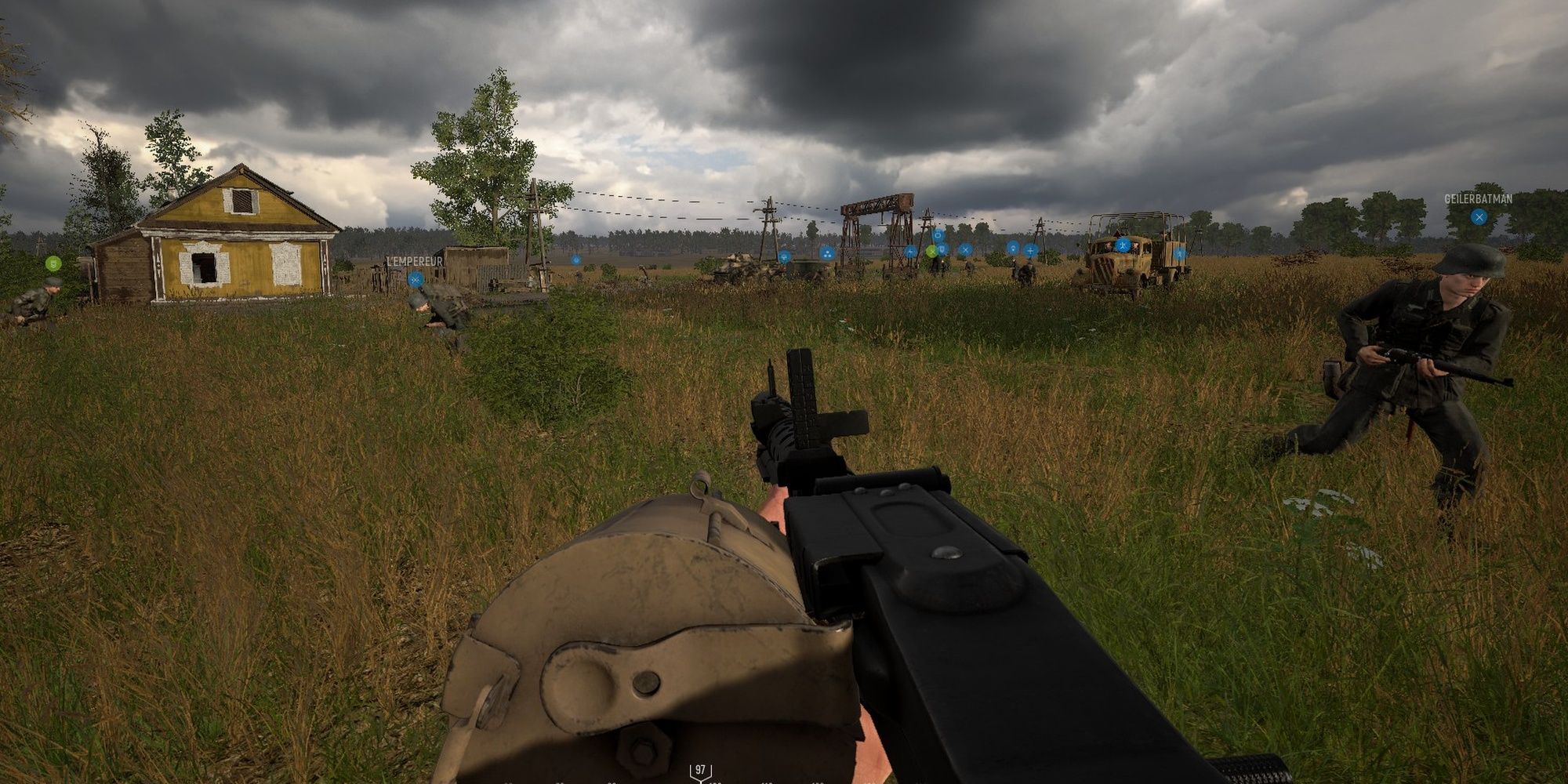 For those that decide to strap a heavy weapon to their back and cover their uniform in rungs of ammunition as this Class, you’re in for a fun time. As mentioned before, it’s a fairly straightforward role. Find a spot, mount your gun, then make the big gun go Brr until nobody in front of you is left standing.

However, whilst that strategy can get you so far, there are a few tips worth knowing that the veteran MG users have picked up and spread to the Community to make this class easier for beginners. So with that in mind, here’s what you need to know to make the most of this suppressive fire fiend.

Camping Is A Legitimate Strategy 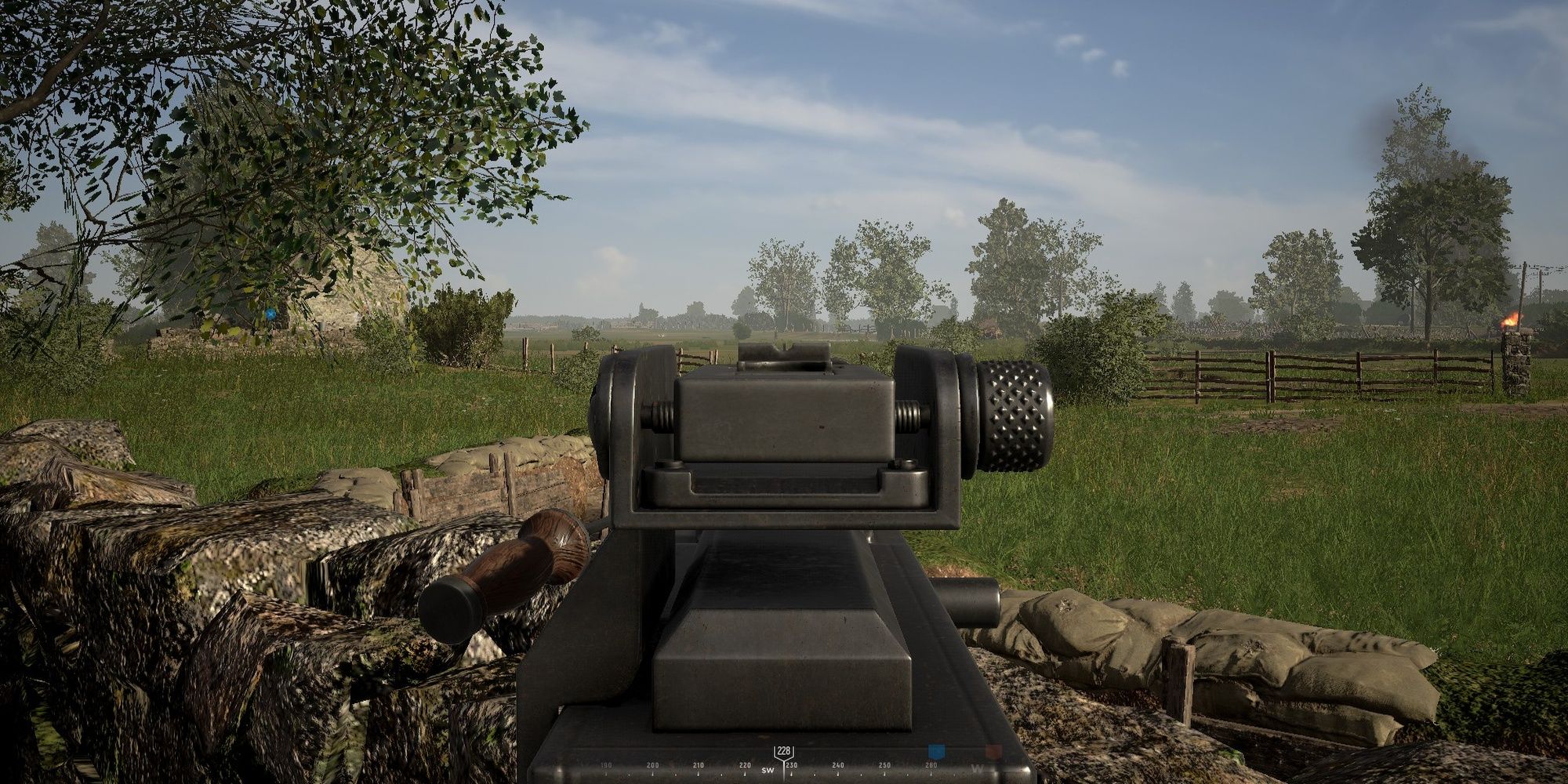 In other FPS games setting yourself in a corner and spraying anything that walks past is generally frowned upon. But in Hell Let Loose, camping as an MG is actively encouraged.

Finding a good spot to mount your gun can completely tie up the other team for quite a long time. Since K/D ratios aren’t a thing here, the more kills you get means the more time the enemy team is wasting trying to take your position. So holding down the fort or covering a chokepoint can sometimes make the difference in particularly tough matches. 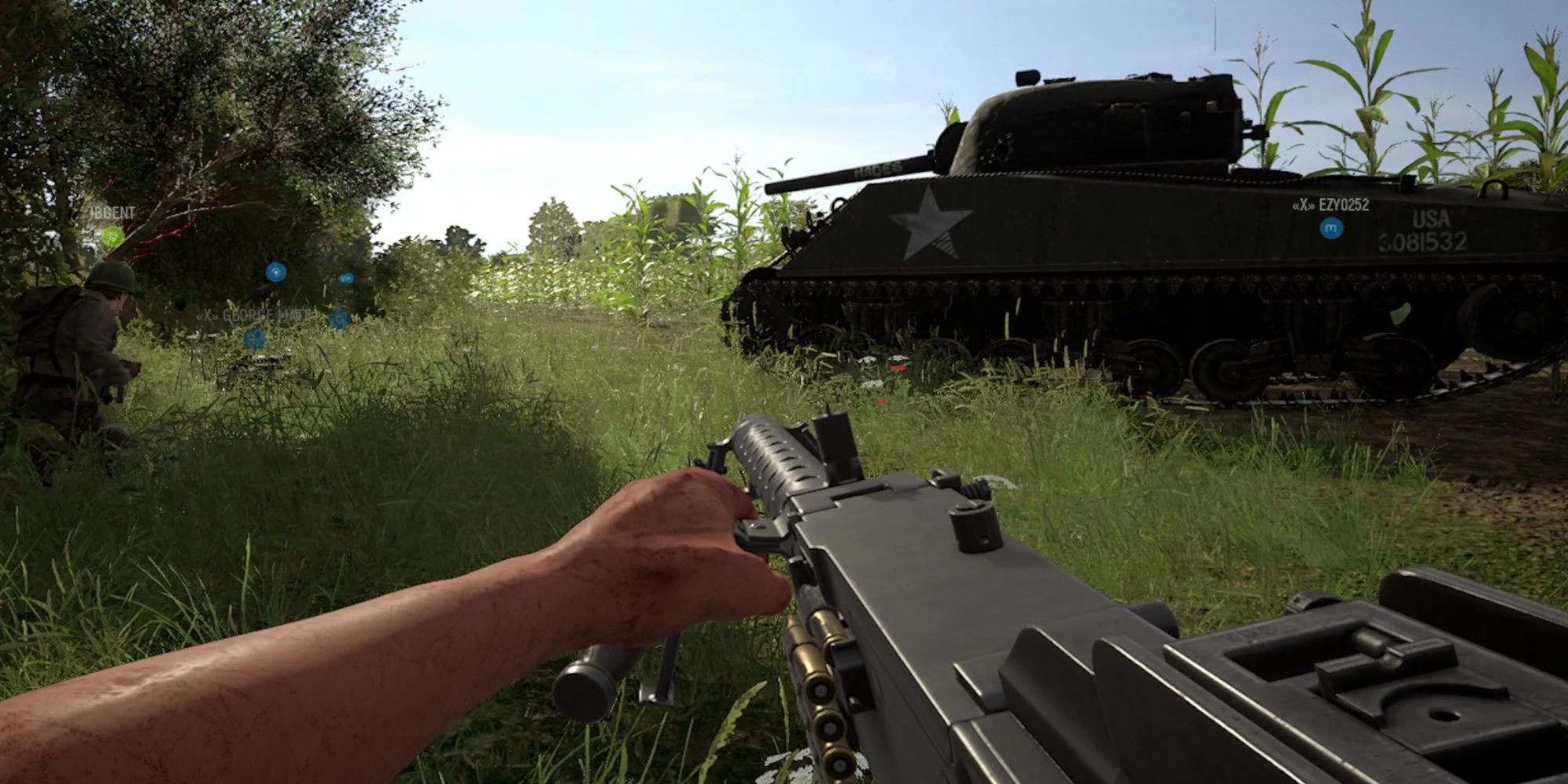 When you’re running with a big wave of infantry, it can be quite easy to get carried away in the moment and run further than you should. As a Machine Gunner you should ideally be as far back as possible from the main push as you can.

It can take crucial seconds to get yourself setup, so you’re best used just behind the main force, spraying ahead of friendly troops. Your main goal should be to make sure the enemy keep their heads down. Doing this allows your teammates to push in and take them out easier. So go only as far as you’re effective.

Reload Only When You Have To 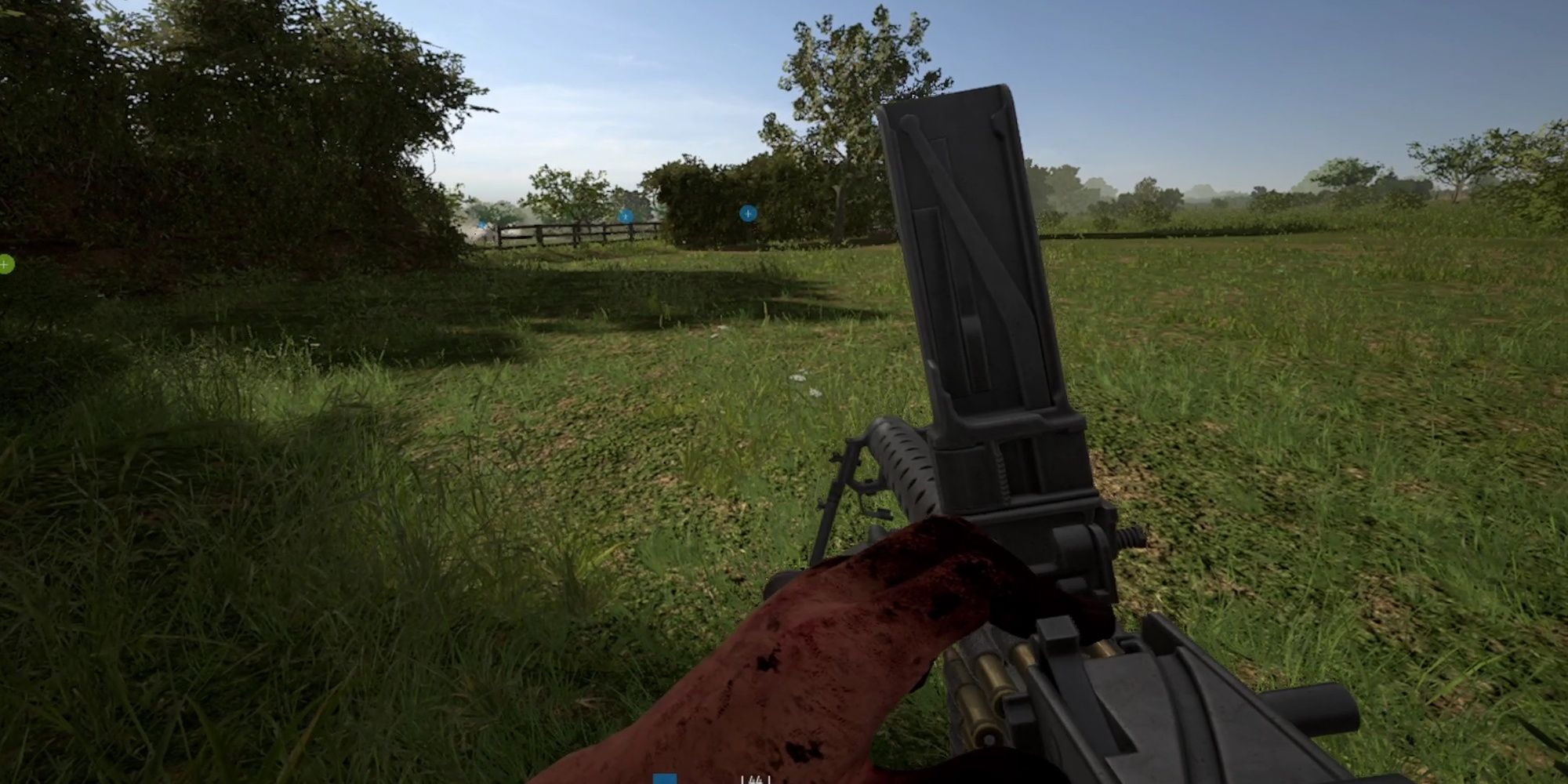 The heavy machine guns come with a boat load of ammunition, especially the MG42. You can put a lot of rounds downrange with these weapons as their capacity for bullets is pretty high. However, their reload time is quite long and if you mistime it you’ll end up dead pretty quickly.

Ideally reloads should be as you run dry or have about a tenth of your magazine left. There’s more rounds than you think and spraying a short burst, then reloading, gives ample time for an enemy charge to push your position and kill you. If you need to reload, try and time it with a friendly assault or reposition. 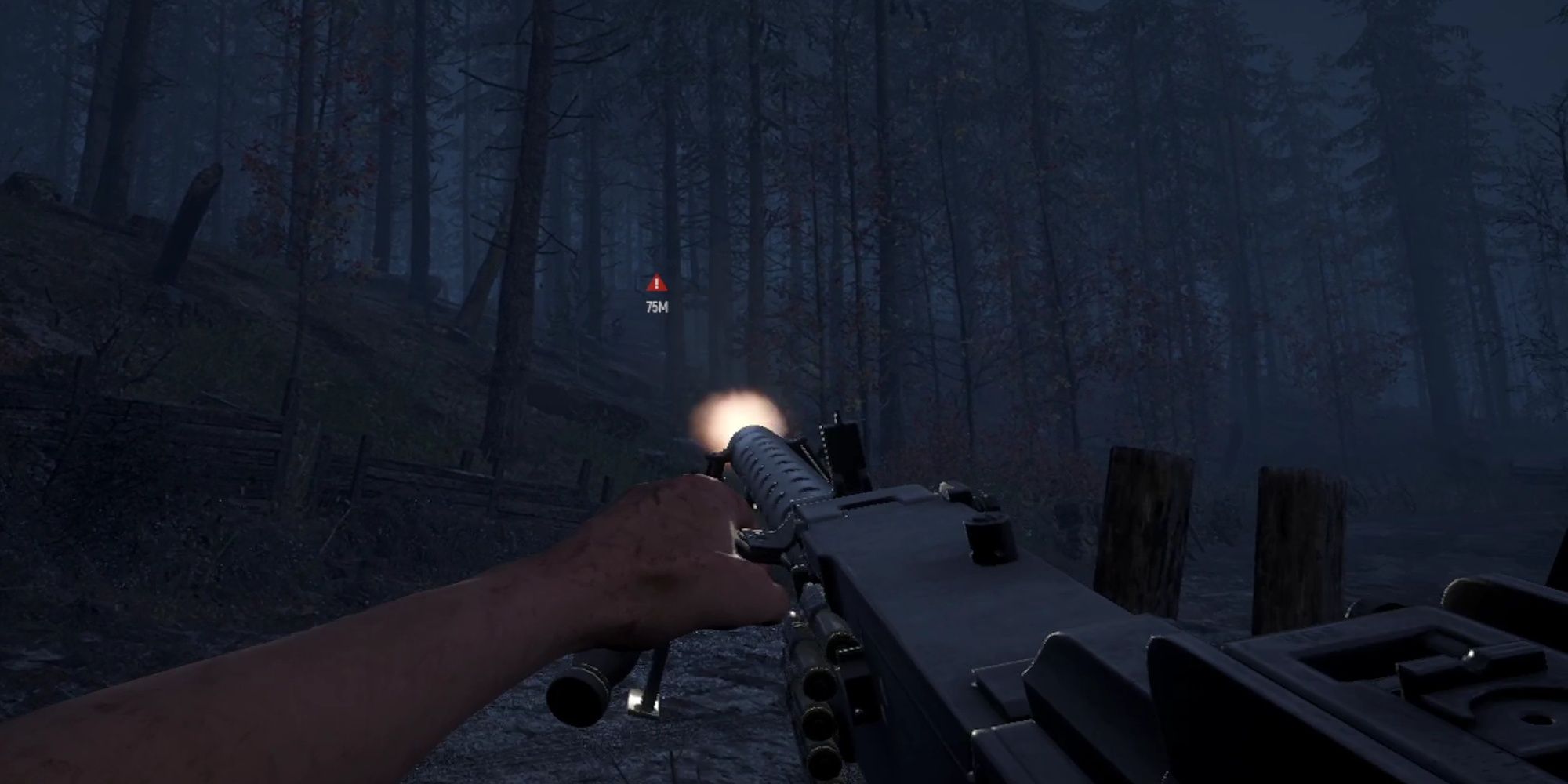 It’s hard to resist the urge to hold down the trigger and rain everything you have on a target in one long continuous go. However, it’s highly recommended that you use short, sharp bursts instead as it’s much more effective.

The longer you fire, the more inaccurate the MG becomes, so it’s more accurate to keep things controlled and quick. Spraying continuously also lets the enemy team figure out where you are and it’s a quick trip to headshot city if that happens. This is crucially important on the night maps as after a recent update the developers added a large bright muzzle flair to the Machine Guns. So you’re extremely easy to spot if you go full auto like a maniac.

Talk To Your Sqaud Lead 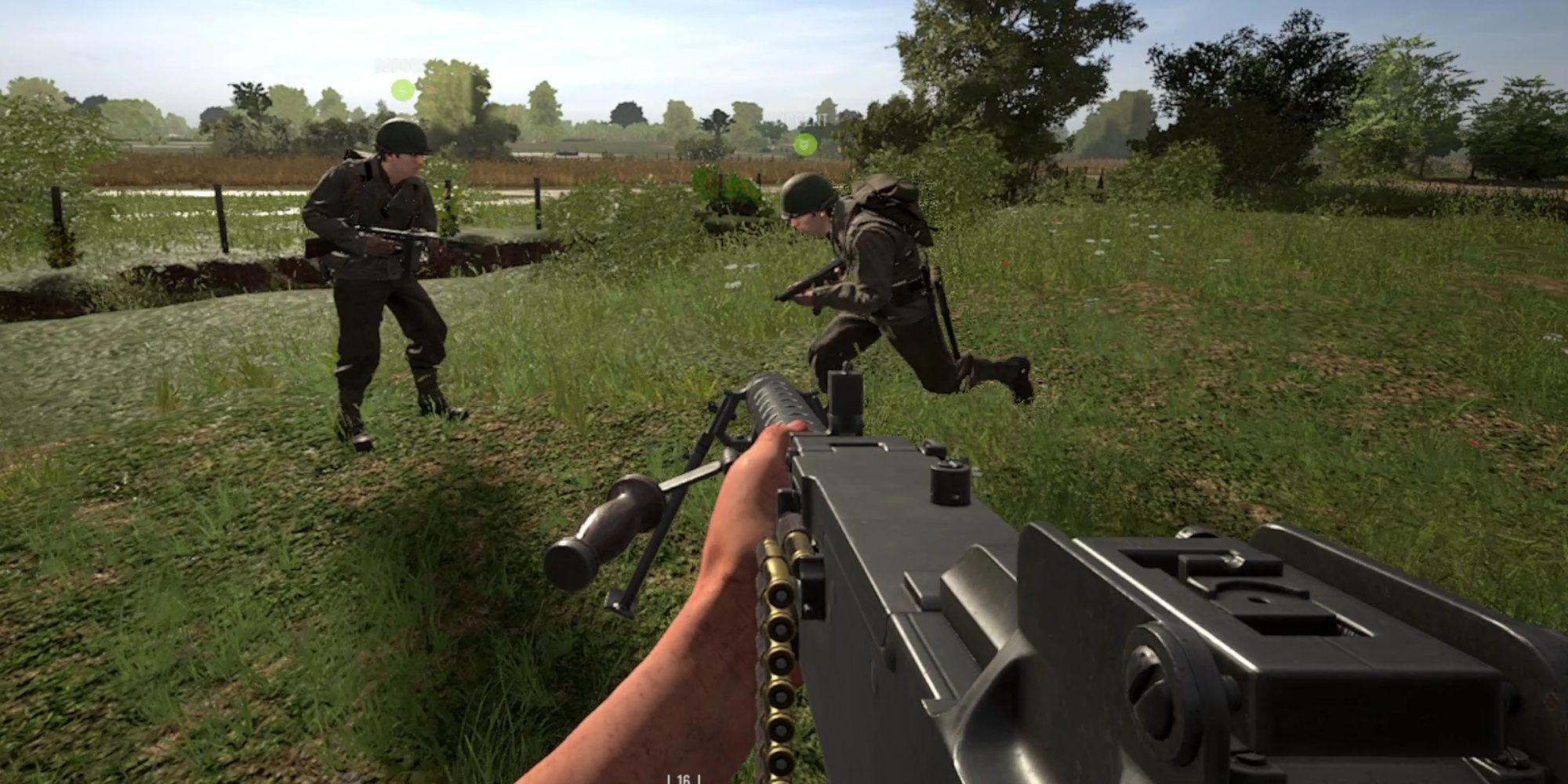 Most classes in Hell Let Loose can get away with being fairly quiet in the Sqaud Chat. However, the Machine Gunner, like the Medic and Engineer, needs to be at least a little bit talkative. You don’t need to give your life story, but ask for targets and where to send suppressive fire at a minimum.

Squad Leaders and other members of your crew can post pings on targets. So have them notify areas where all your bullets need to go right at that moment. Get into the cycle of finding a spot, setting up your gun, asking for targets, and then cover the advance. It’s that simple and once you get it down you’ll be a massive asset to your team.