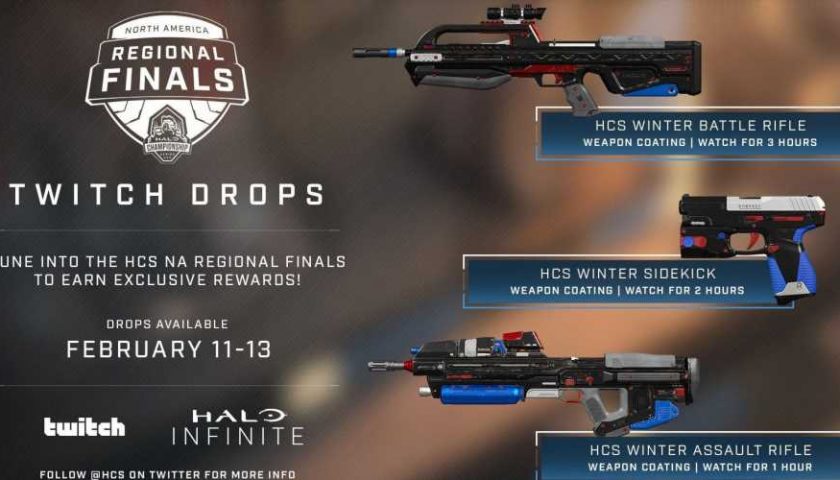 To celebrate the North American regional finals of the Halo Championship Series, 343 has put together a set of new weapon skins that can be earned from February 11 to February 13 simply through watching the championship series. Watching one hour gets you the Halo HCS Winter Assault Rifle Skin, two hours gets you a skin for the Sidekick, and watching three hours gets you the same skin for the Battle Rifle.

Free skins are always a good thing, but this particular set has caused uproar in the Halo community thanks to the resemblance to the max-rank rewards earned in Halo 5 Guardians, which are nicknamed Watchdog. As pointed out by Halo YouTuber MintBlitz in a video titled "343 please don't do this", the HCS skins look almost exactly the same as the Watchdog skins, just with a slight colour change.

The difference in effort to get these skins is massive too. To earn the max-rank skins, players have to reach level 152, which reportedly takes upwards of thousands of hours to achieve. This is compared to the HCS skins which just take a few hours of watching a championship series and gets you almost the exact same result.

Comparison images show that the difference between the two skins is almost unnoticeable, even when being wielded by the player. The only part that is even a little bit different is the red colouring underneath the barrel and a slightly lighter handle. Although some skins are bound to be a little similar, Halo players consider this instance to be far too much because of the time and effort needed for the Watchdog skin.

Halo players took to Twitter to complain about the skins, comparing the rewards available for watching the Championship Series to those currently available for playing the game and noting how much more effort has been put into the event.