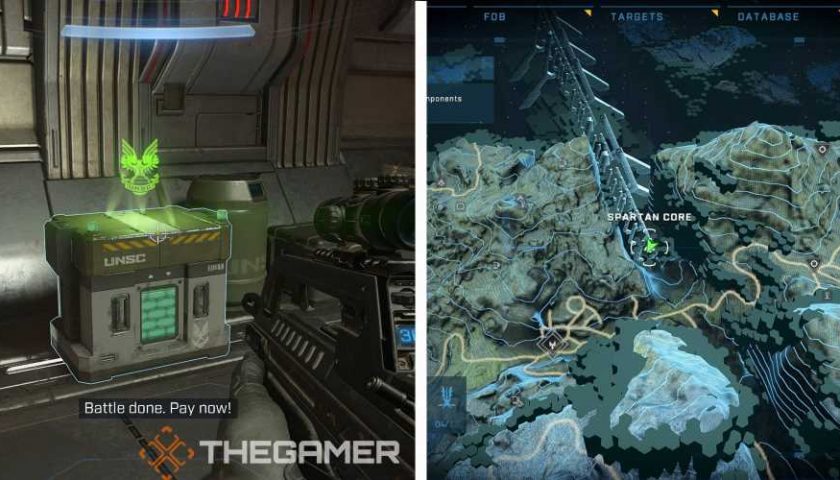 To take down The Banished, you're going to need to beef up Master Chief's abilities to make him as strong as possible. That's why you need to find all of the Spartan Cores that are hidden across the landscape of Zeta Halo. There are 45 Spartan Cores in total that you can discover in Halo Infinite while you're clearing outposts, claiming FOBs, and trying to save the poor USNC soldiers scattered about this massive ring of death.

Previous guides have covered the locations of the cores located in the first and second regions. This guide will show you where to find the last 20 Spartan Cores in the final two regions of Zeta Halo. Oddly enough, you only need 35 Spartan Cores to fully upgrade the Grappleshot, Threat Sensor, Drop Wall, Shield Core, and Thruster abilities. That being said, you do need to acquire all of them if you want the prestigious Mjolnir Master achievement.

The third region of Halo Infinite's map is the smallest out of all of them. It's the area where you blow up the anti-air guns in the story mission called Pelican Down. There are only 5 Spartan Cores to pick up among the wreckage here. 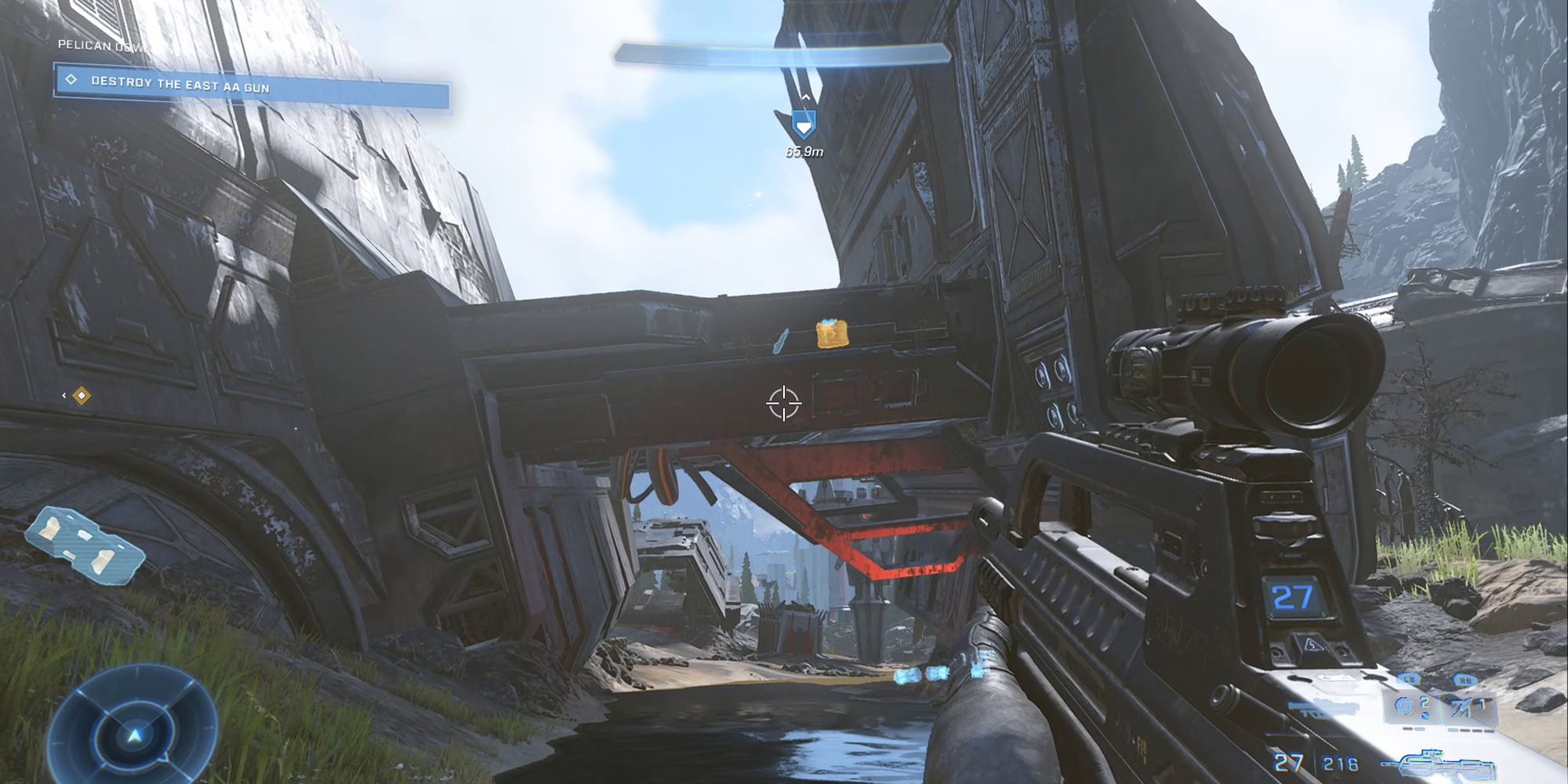 The very first core can be found pretty early on in this mission. It's to the east of the diamond-shaped marker for the Pelican Down mission on your Tacmap. Find some H-shaped wreckage that looks like the picture above. Grappleshot your way up there and you'll find the core along with some grenades and a VK78 Commando rifle. 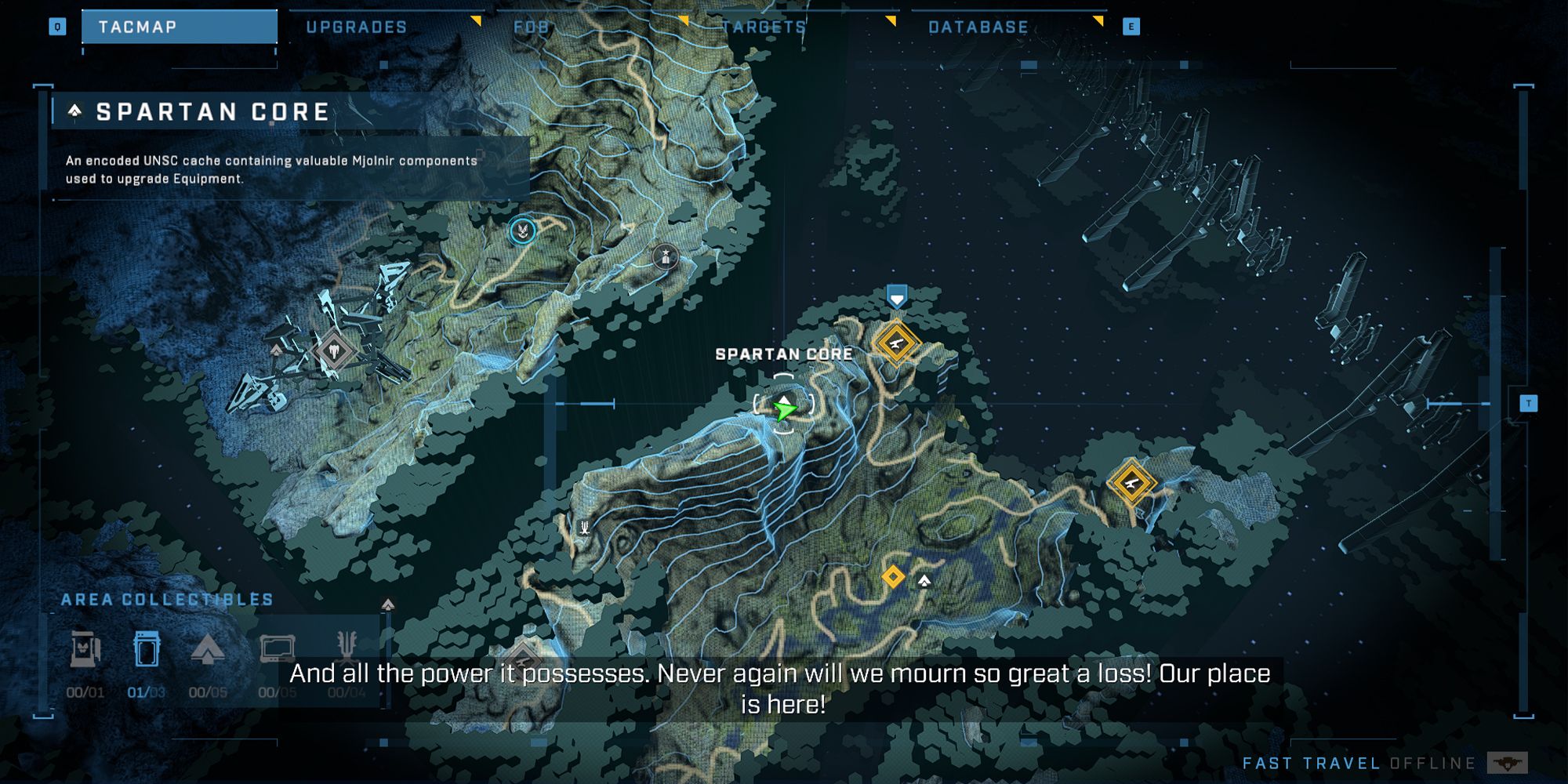 Southwest of the North AA Gun, you'll find this core on a ledge. You should also be able to hear the blathering of a Propaganda Tower nearby, so feel free to blow that up too. 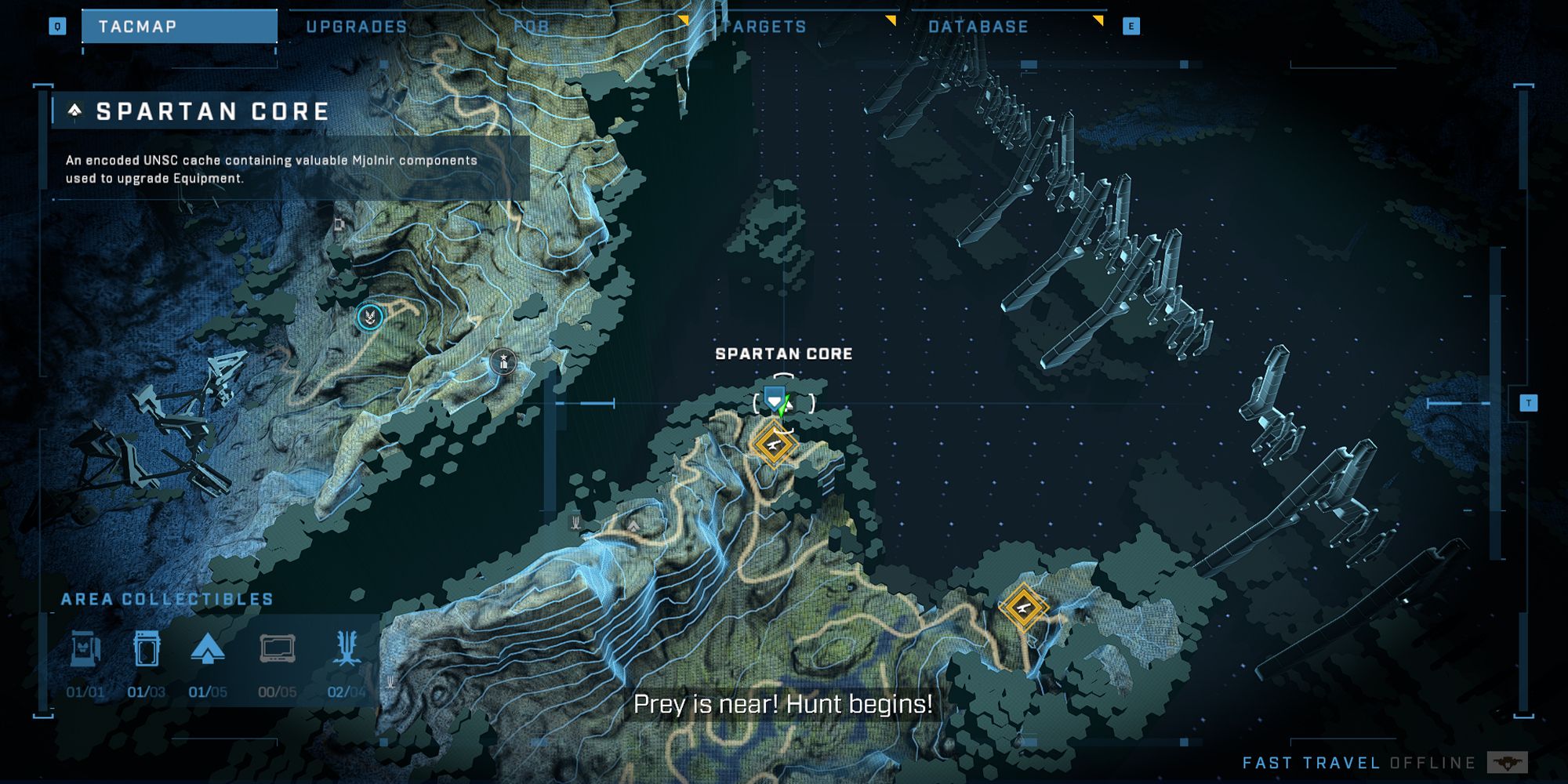 This core is located just a bit north of the North AA Gun. After you've killed all of the Banished enemies that are guarding this AA gun, you'll have to press a switch to activate the grav lift that will bring you inside so you can blow it up. Behind the switch, there will be a building filled with even more baddies for you to dispose of. Your core will be inside not too far from the entrance. 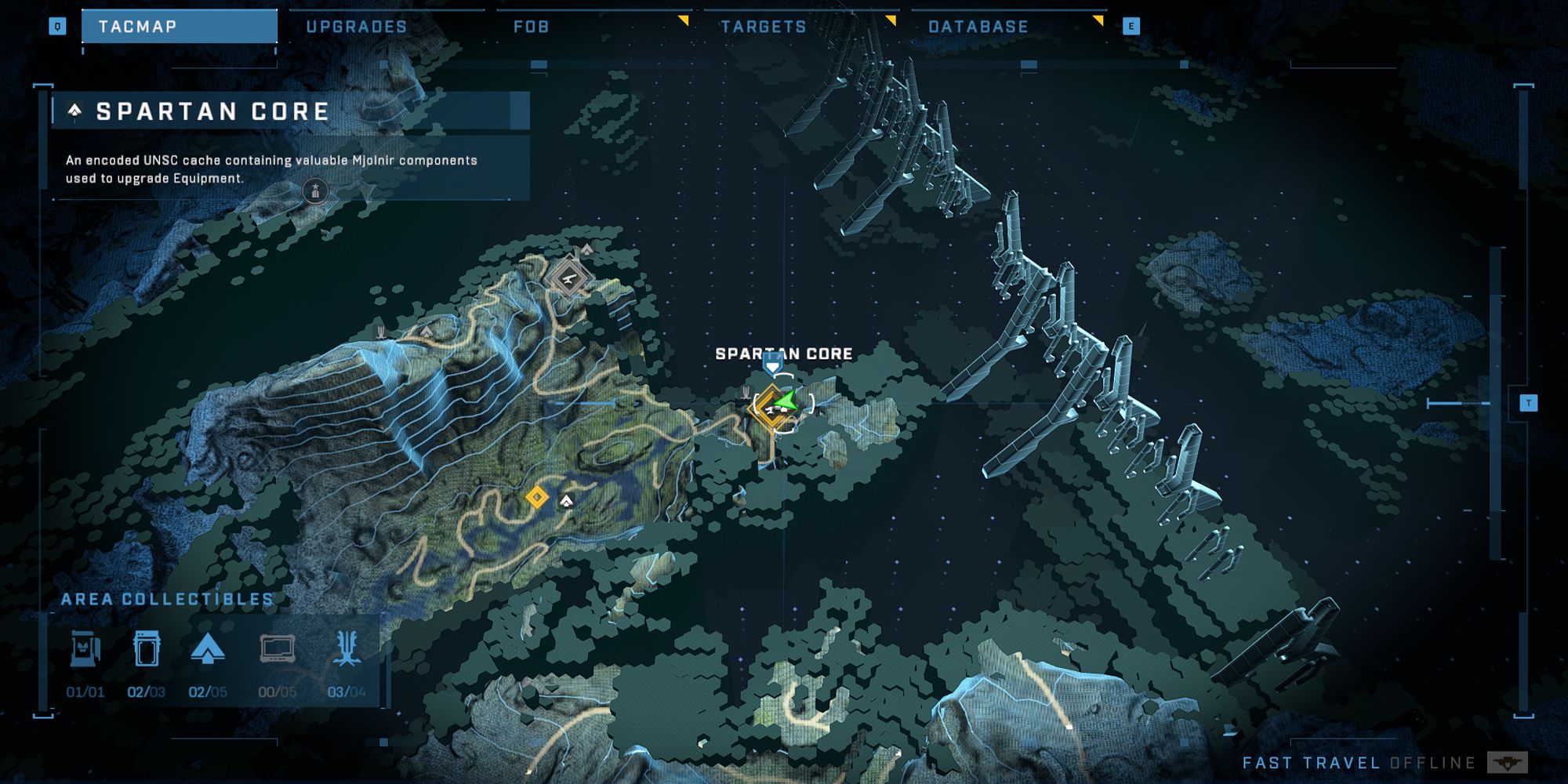 If you go underneath and a bit to the east of the East AA Gun, you can find this core inside of a small cave with some sleeping Grunts inside. Just be careful as there's a significant amount of enemies stationed at this AA Gun including two Hunters. 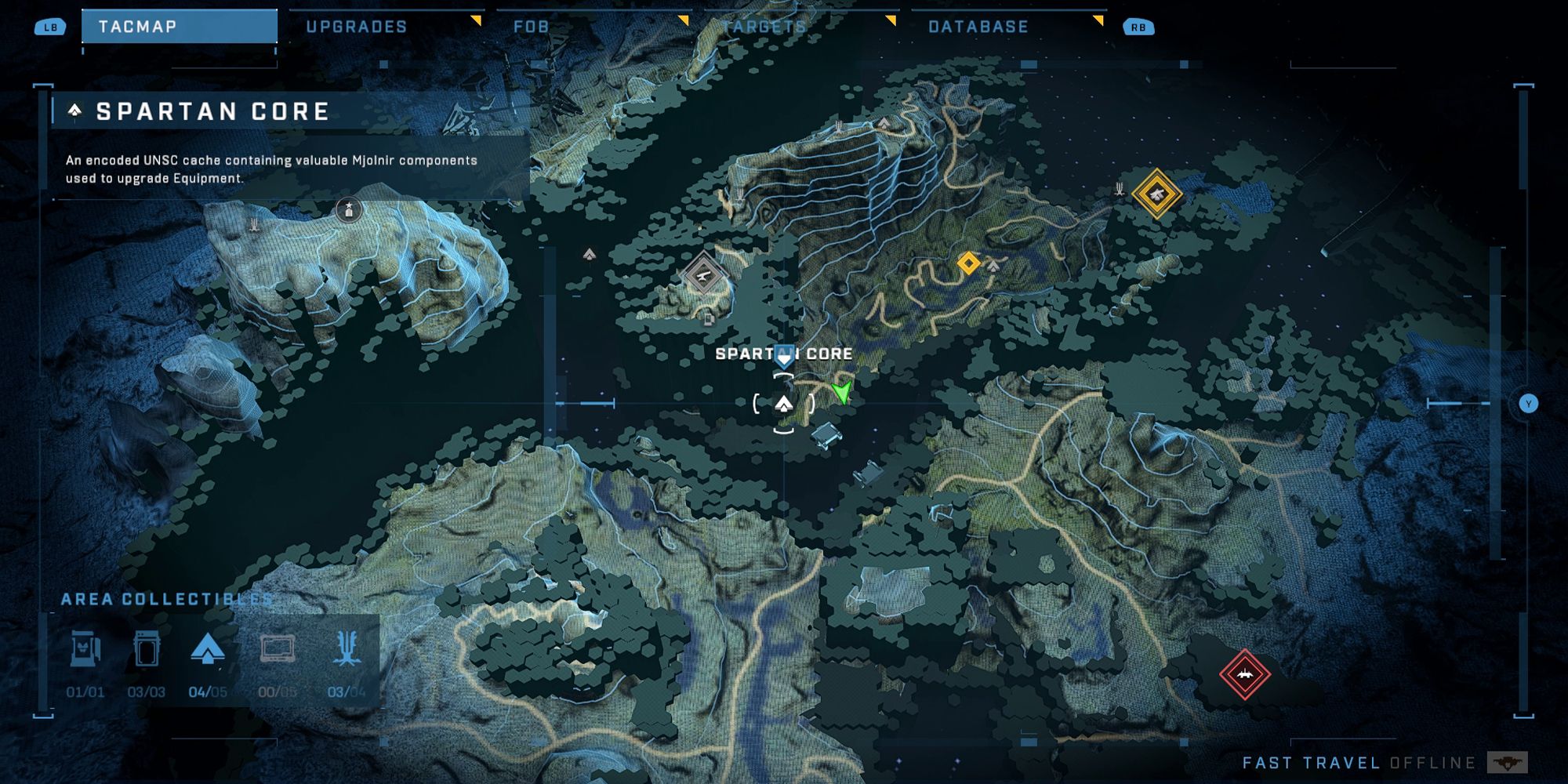 The last core in this area is found southeast of the West AA Gun. It's on the left side of a large freight elevator that you can find here.

The final area of Zeta Halo is perhaps the largest and has 15 Spartan Cores spread across it for you to discover. Around this region will be beacons that you'll need to visit to complete a mission called The Sequence. 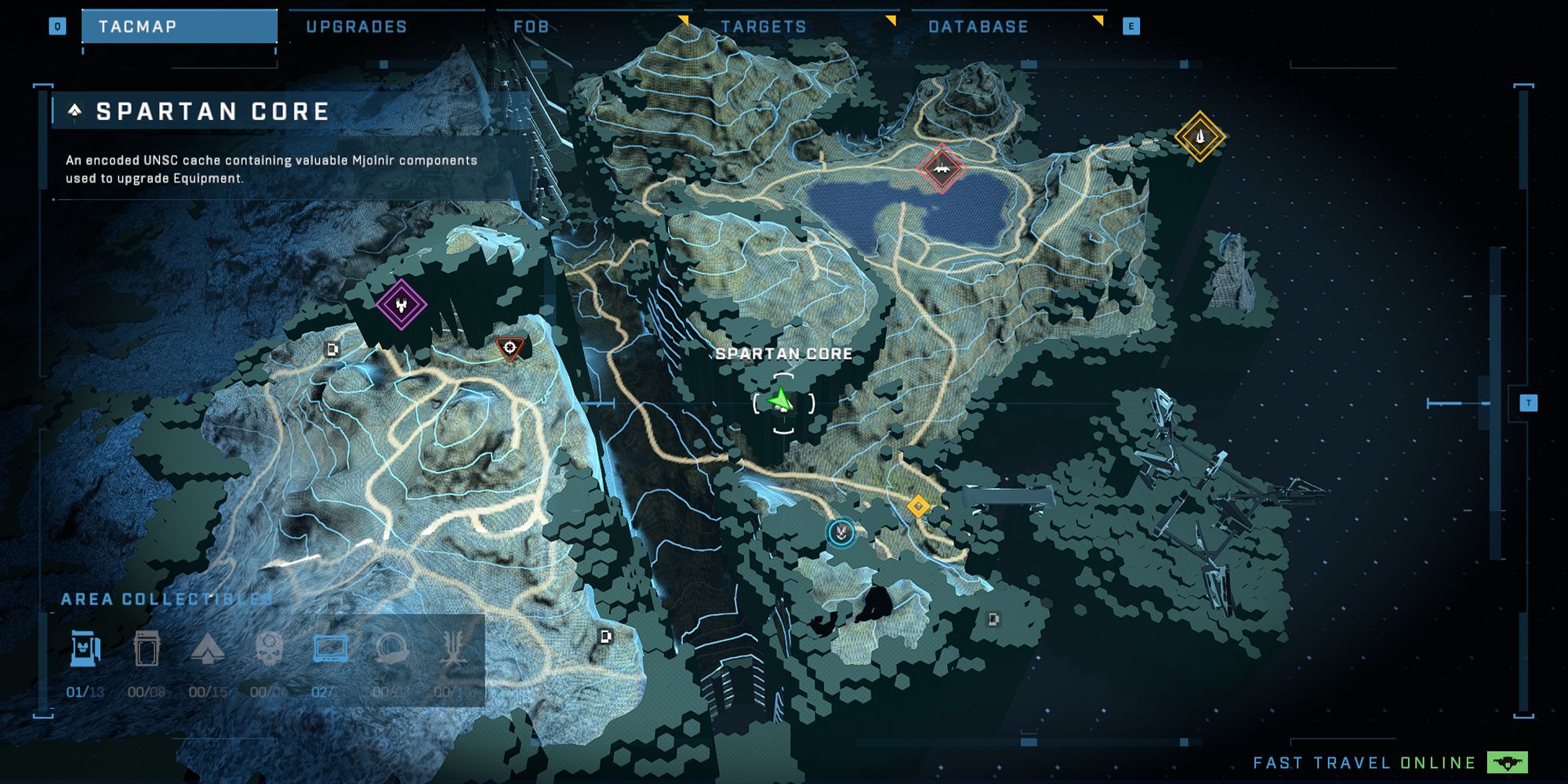 Travel northwest of FOB Lima. You should reach a tall wall of hexagonal pillars. Grapple your way up this wall until you find an opening that will take you into a secret area within this wall. You'll fight a bunch of Banished soldiers before finding the core on a ledge next to a USNC soldier's corpse. 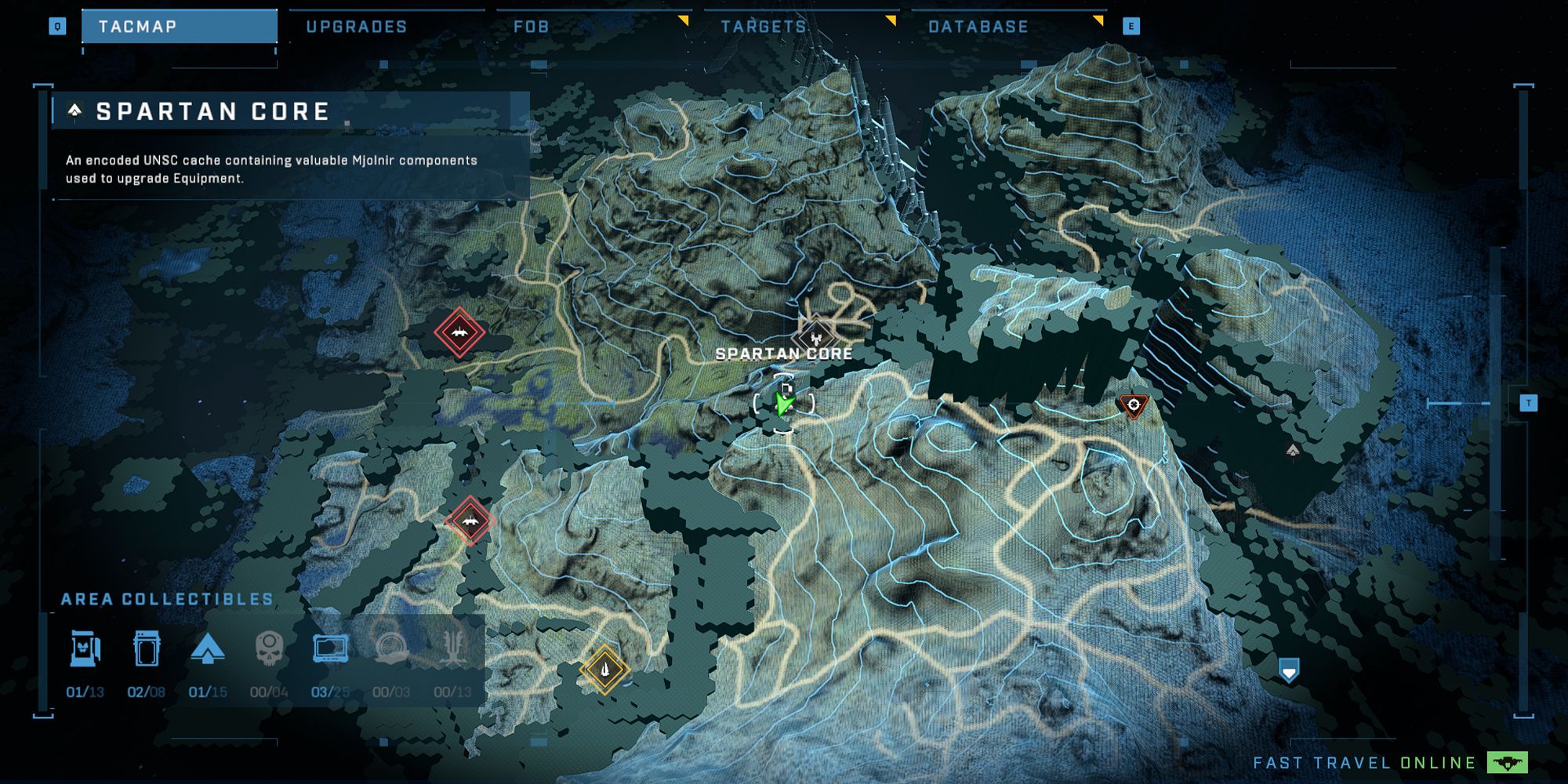 This core is located within the Riven Gate outpost. After you open up all of the gates, you'll eventually be tasked with destroying the power generator to take this outpost offline. Fight your way to the building where it's located and the Spartan Core will be behind an impenetrable force field. However, when you take out the power generator, the force field will disappear and the core will be all yours. 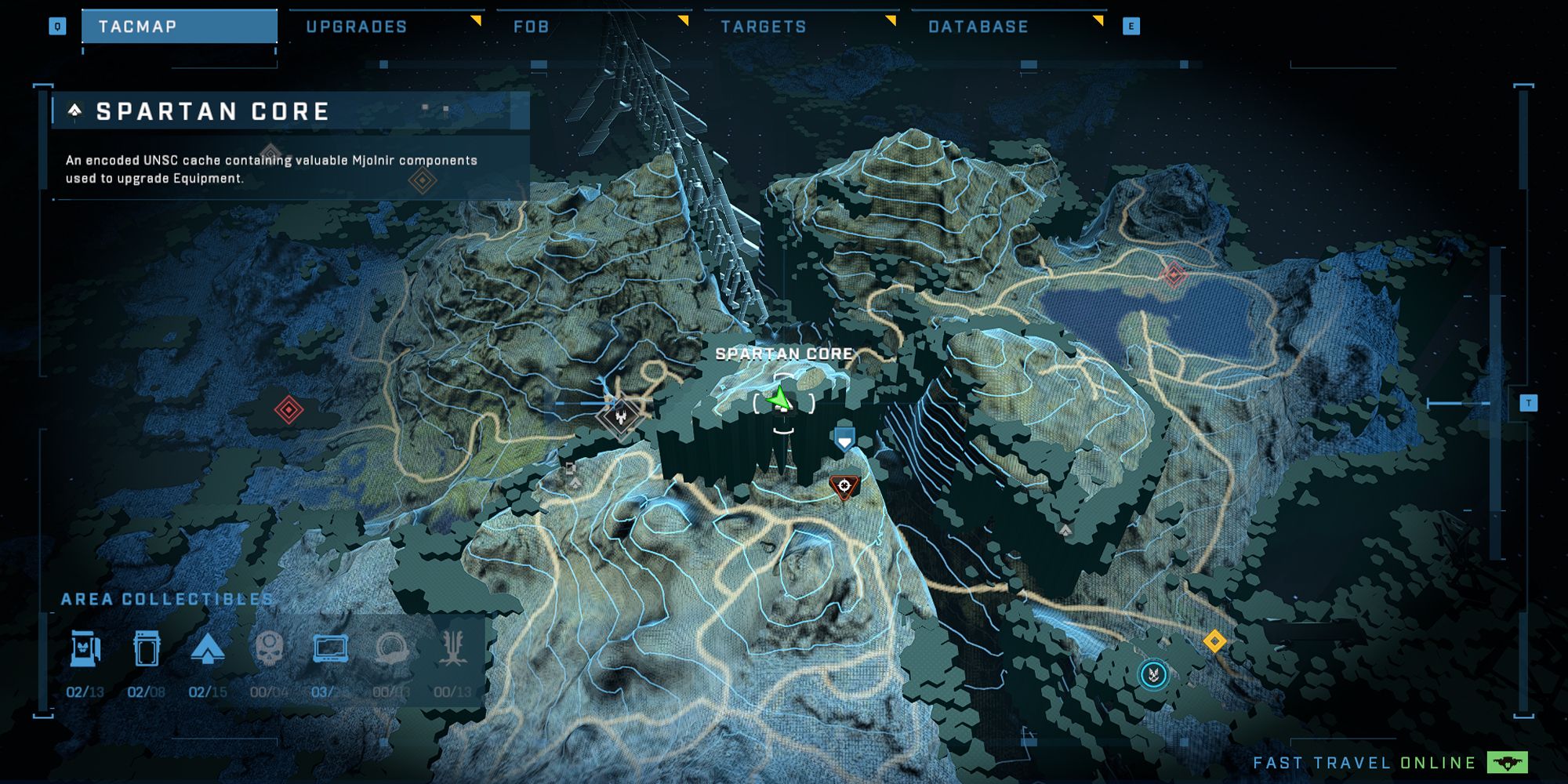 Northwest of a High-Value Target named Barroth, you'll find this core atop some tall hexagonal pillars that you'll have to Grappleshot your way up to. If you do this before fighting Barroth, you can find an S7 Sniper up here that you can use to easily take them out. 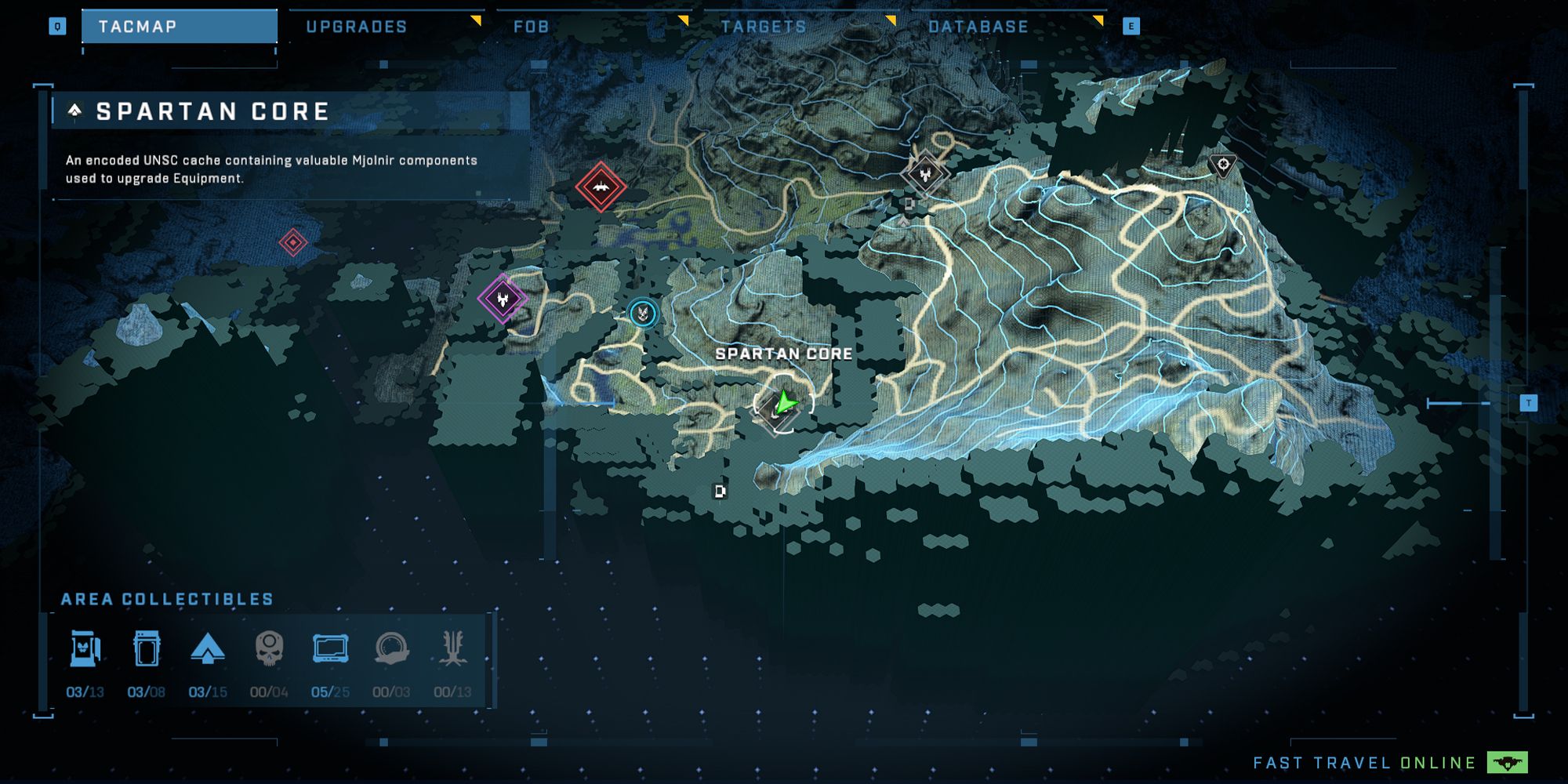 Make your way to the beacon that's in the middle of all of the other beacons. Each beacon will be guarded by a large force of Banished soldiers that you'll have to fight your way through. In this case, you'll have to watch out for Wraith tanks that fire explosive projectiles at you. Wipe out all of the enemies in the area. When it's safe, go behind the building that houses the beacon and that's where you'll find this Spartan Core. 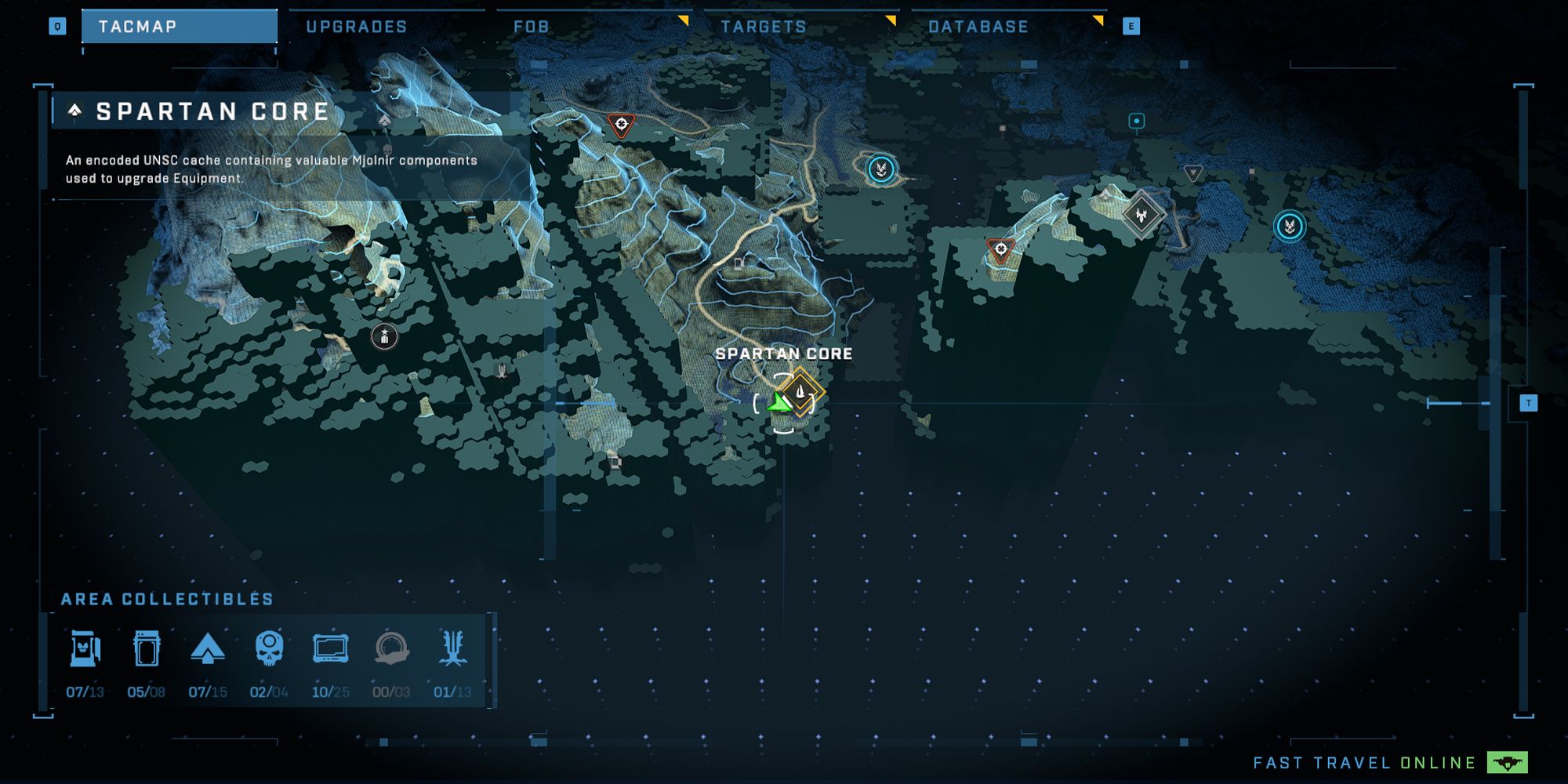 Now head on over to the western beacon. You'll have quite a battle here as there will be tons of Banished. Be prepared to fight hordes of Elites as well as a pair of Hunters on top of the usual menagerie of Grunts and Jackals. Once you've stopped shooting everything in sight, this core will be on the right side of the beacon building. 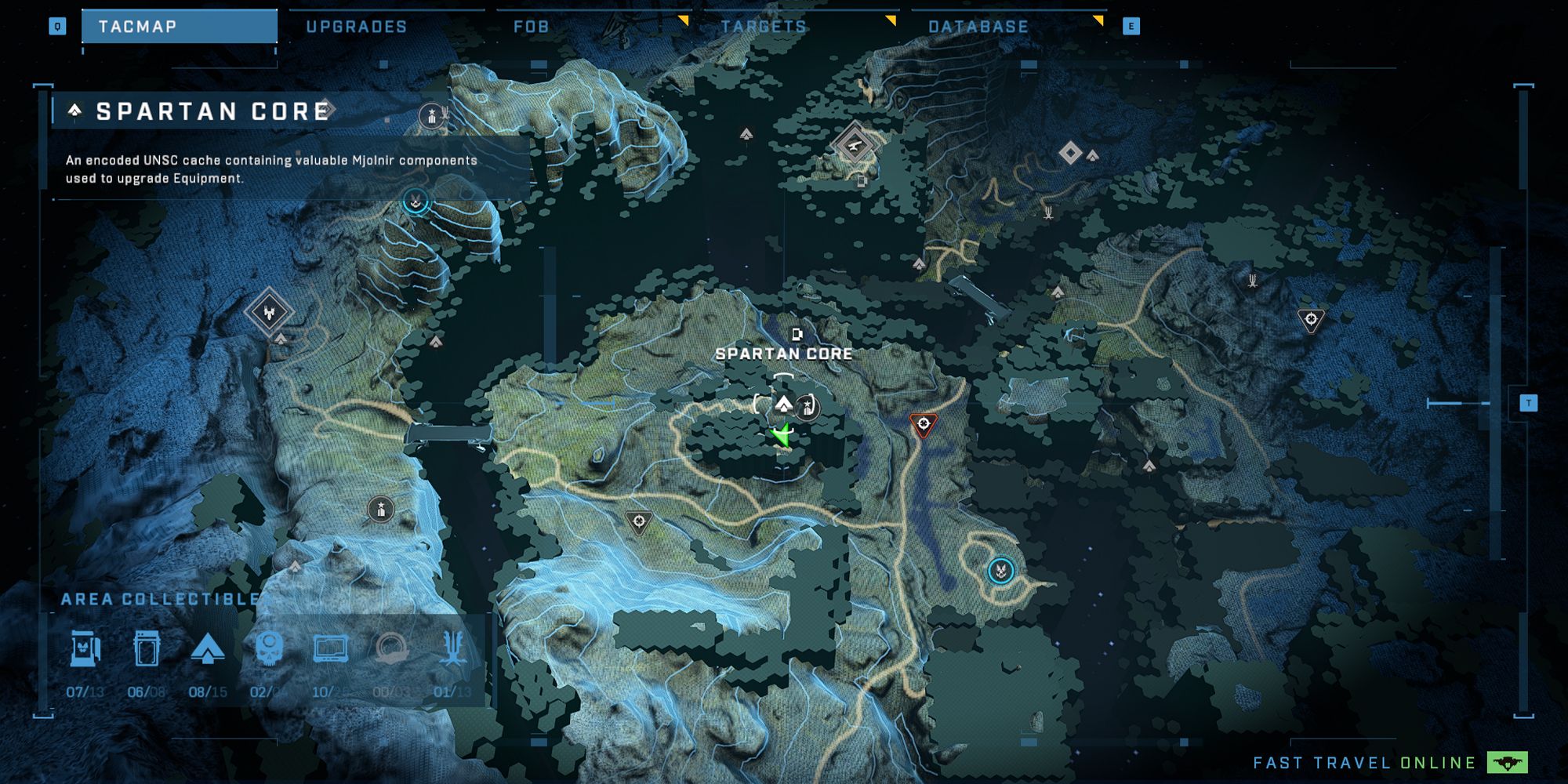 This core is basically right next to the spot where you'll rescue Fortune Squad on the map. After you've gotten rid of the Banished that are bothering these poor soldiers, jump down to the cliffs below to the east. You'll have to go spelunking for this core as it's located down a hole that leads to a cave filled with more bad guys. Take out the baddies and you shouldn't have to look too far to find this core. 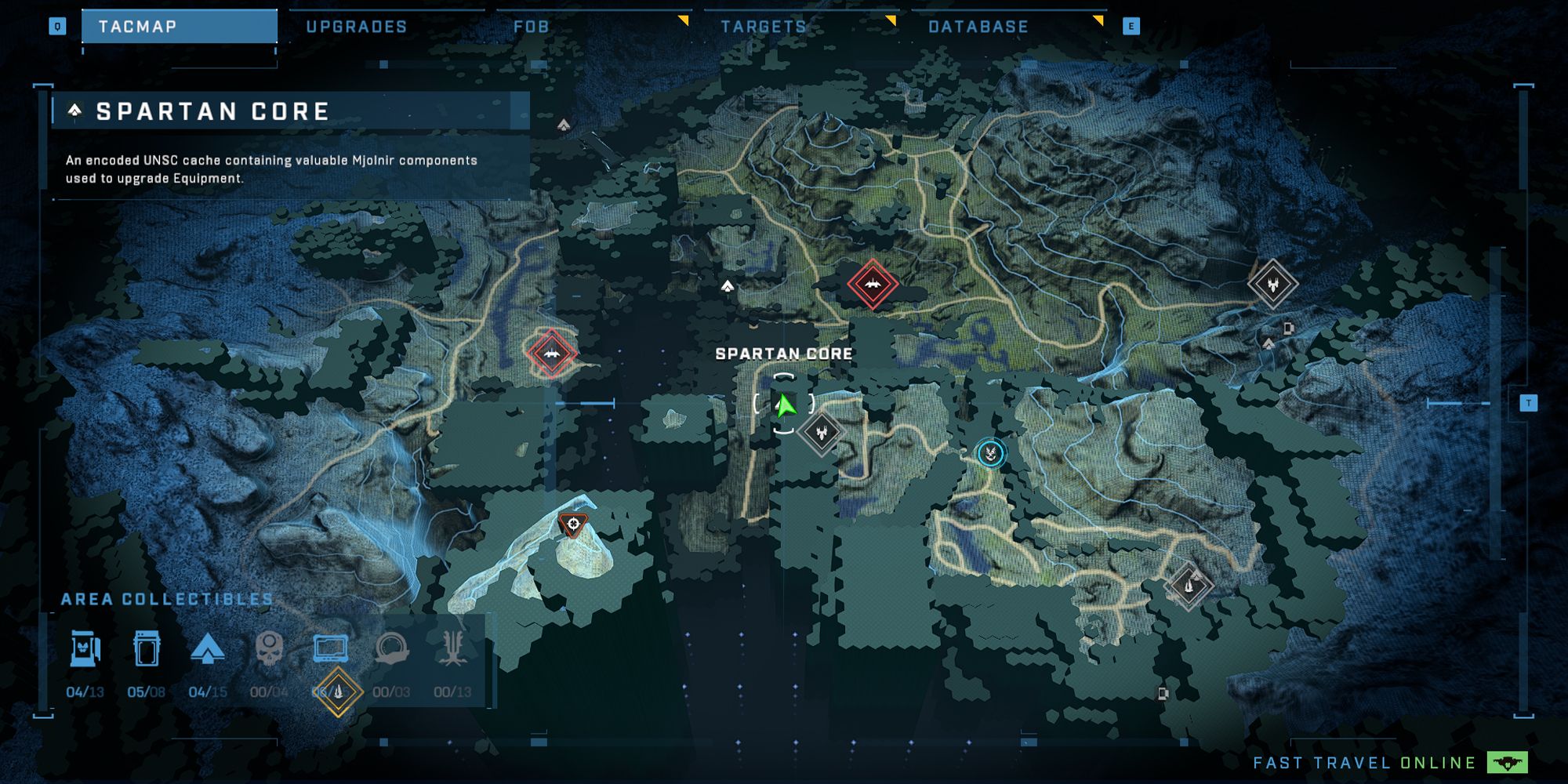 You should be able to grab this core while you're clearing out the Annex Ridge outpost. It's stashed inside of a tiny storage unit northwest of this outpost's marker on the map. Just scan around for it and it shouldn't be hard to spot. 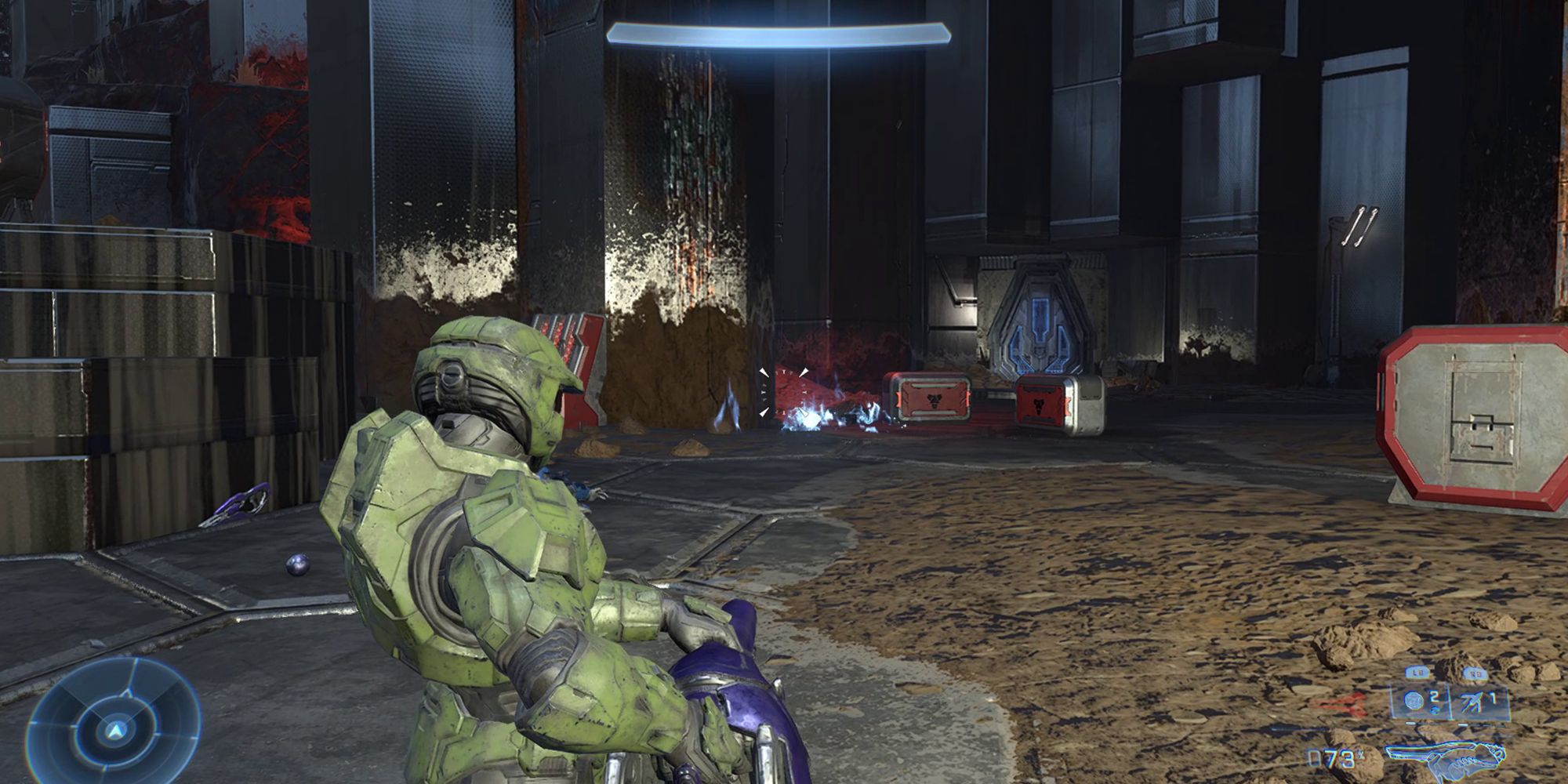 Head directly west of FOB Juliet. You should run into a significant amount of enemies. Kill them and look for a door embedded in the pillars like the one in the picture above. Go inside to find the core. 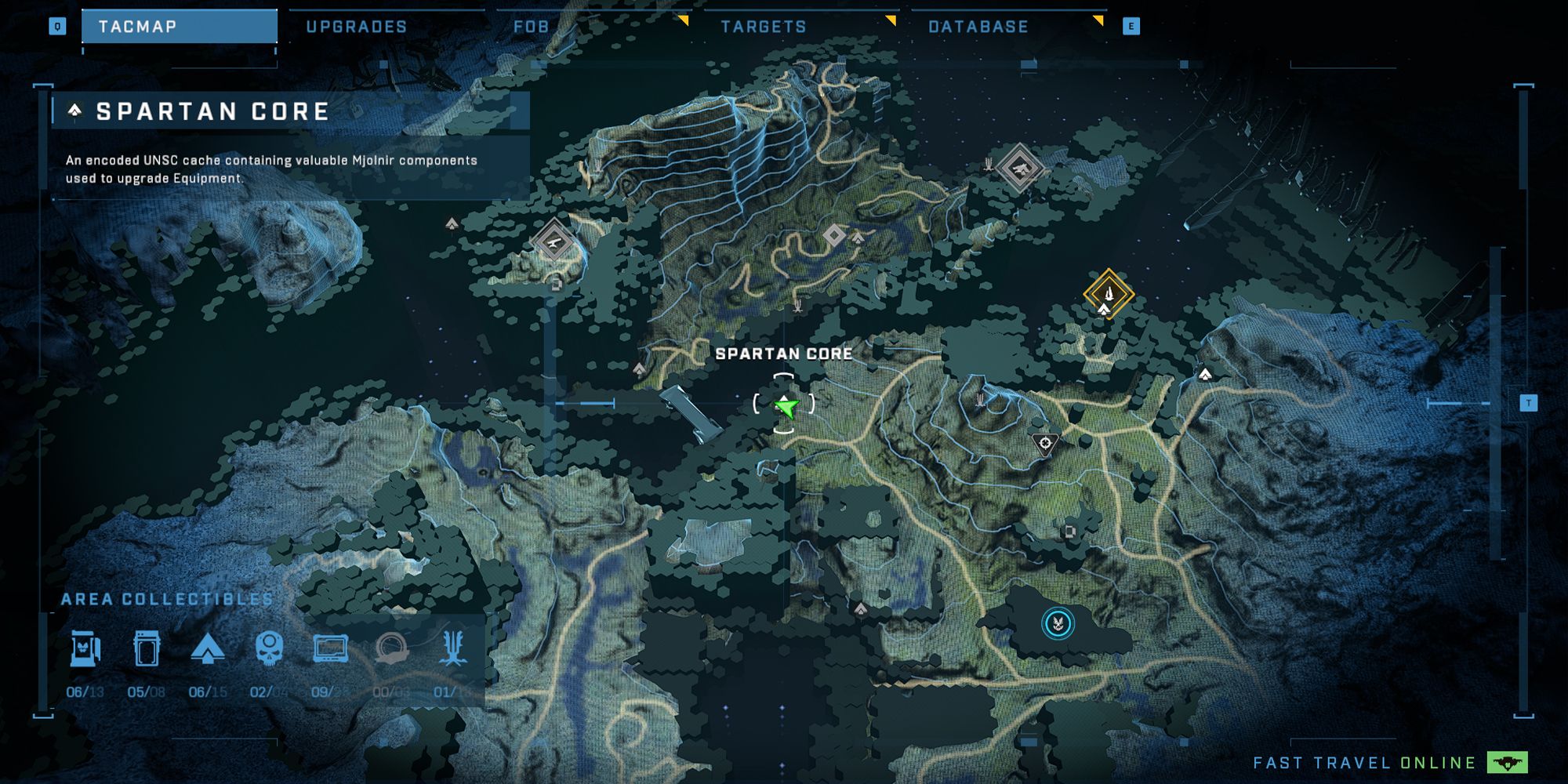 You'll find this core to the east of the bridge that connects the third and fourth regions inside of some ship wreckage. 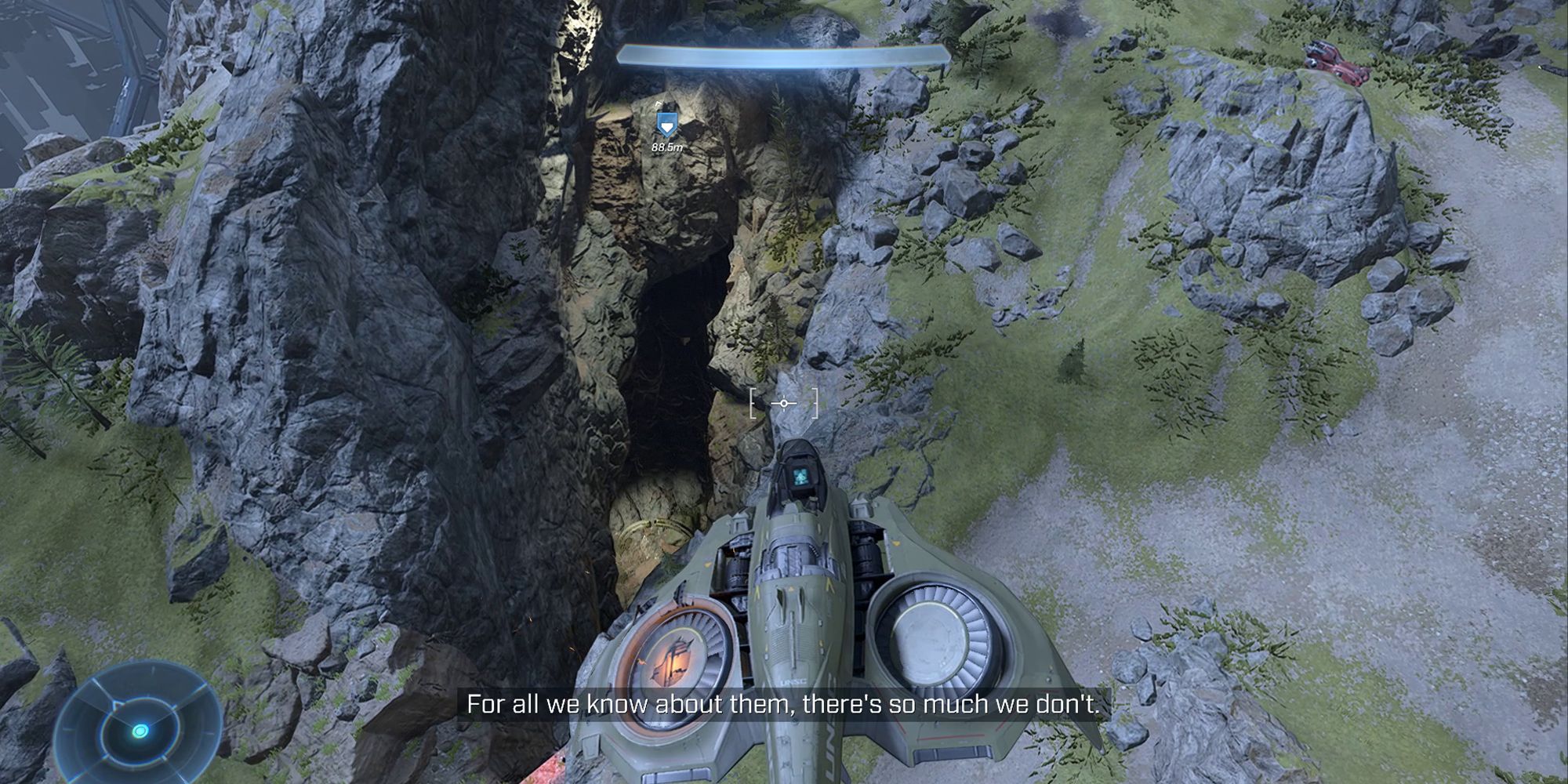 This is yet another core that you'll have to jump down a hole to get. Climb up the mountains to the northwest of Riven Gate. You should come across a platoon of enemies who are close to a Forerunner Artifact. Look around this area for a giant hole that you can drop down into. You'll find the core in the cave below. This one may be easier to spot from the air so taking a Wasp or Phantom over here is probably a good idea. 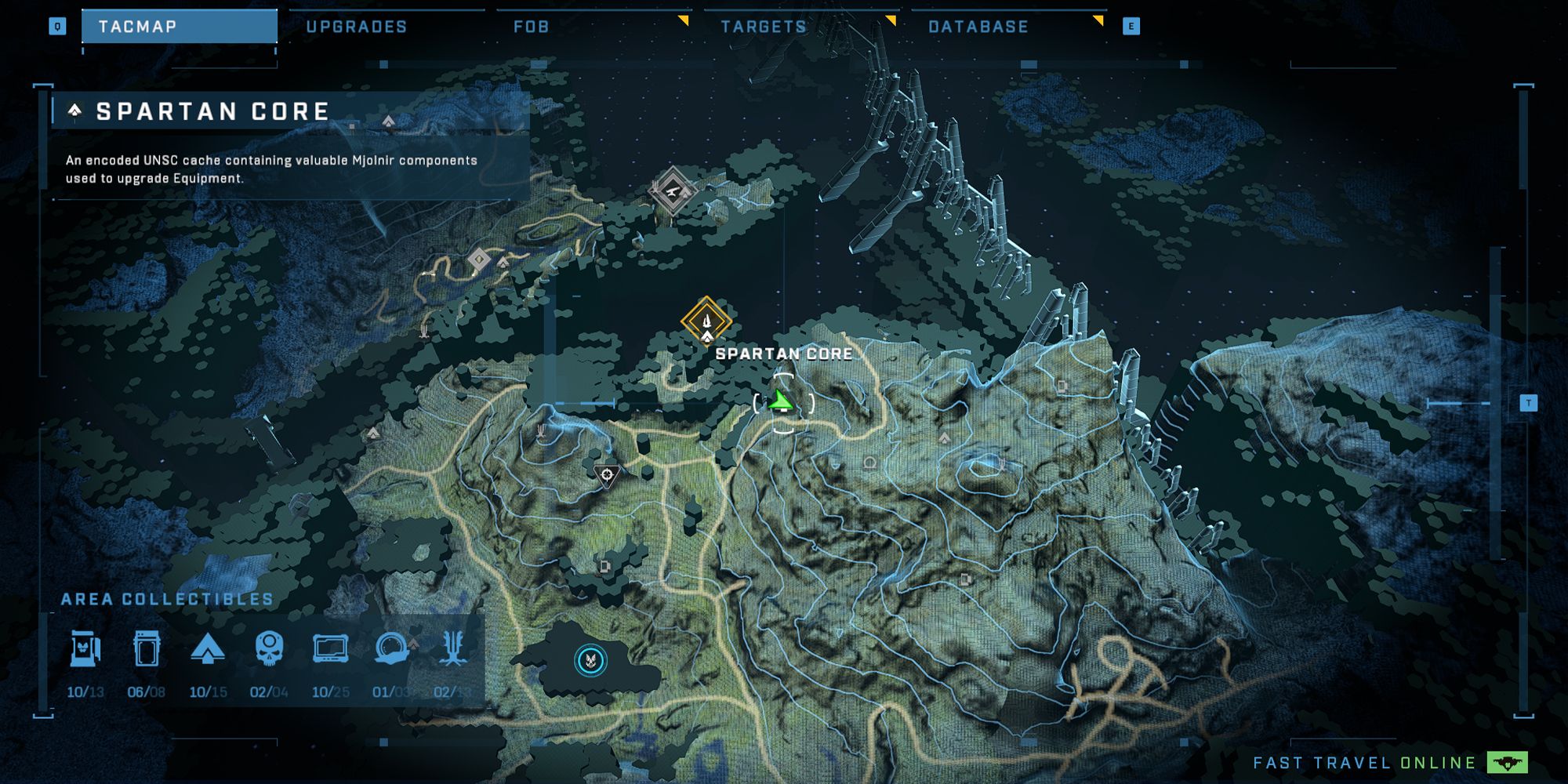 Grappleshot along the cliffs southeast of the north beacon and look for an opening among the pillars. You know the drill: head inside, kill all the enemies and grab the core. 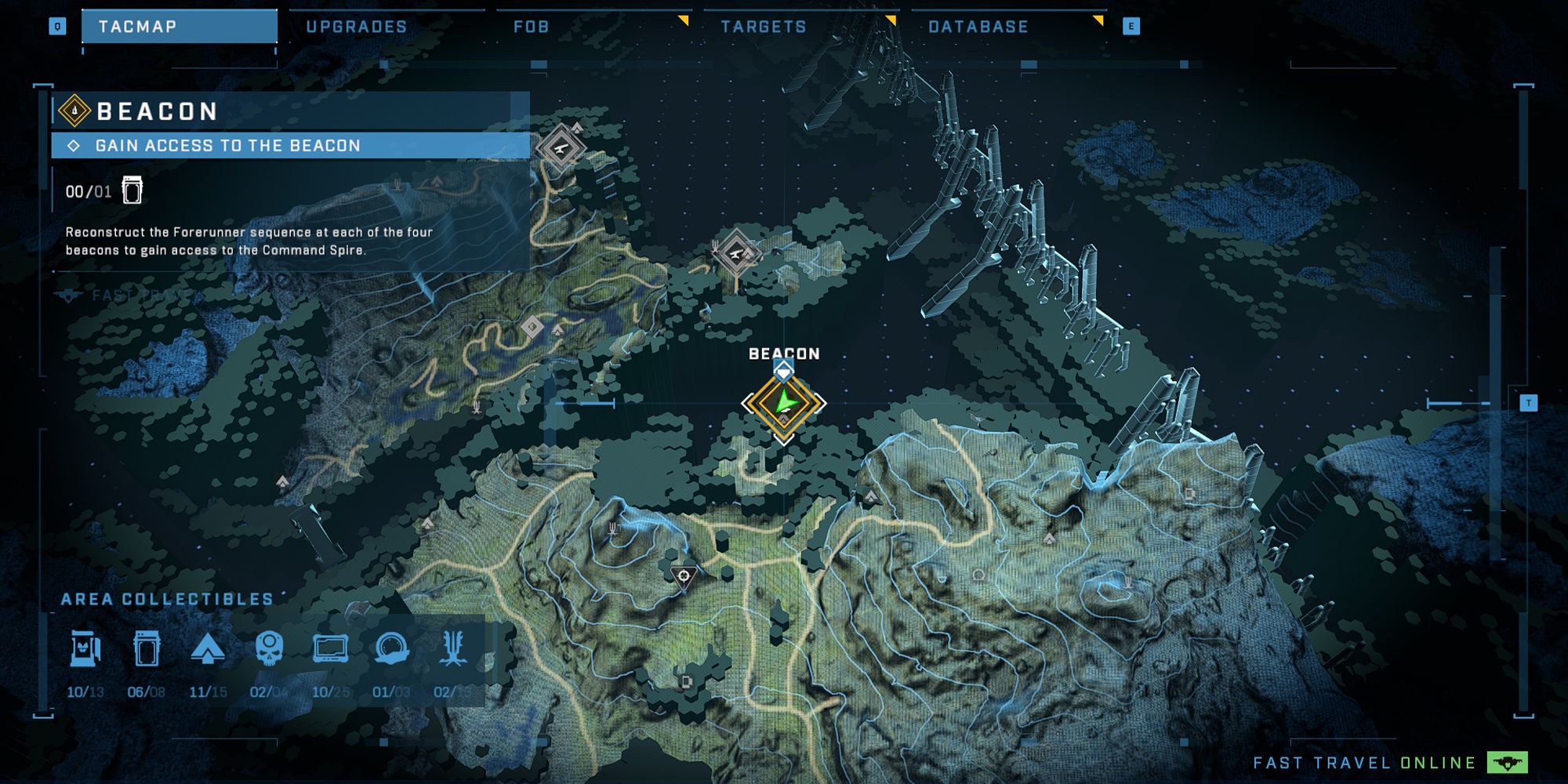 Once you've reached the beacon to the north and dealt with all of the Banished forces camped out here, the Spartan Core will be on top of the beacon building. 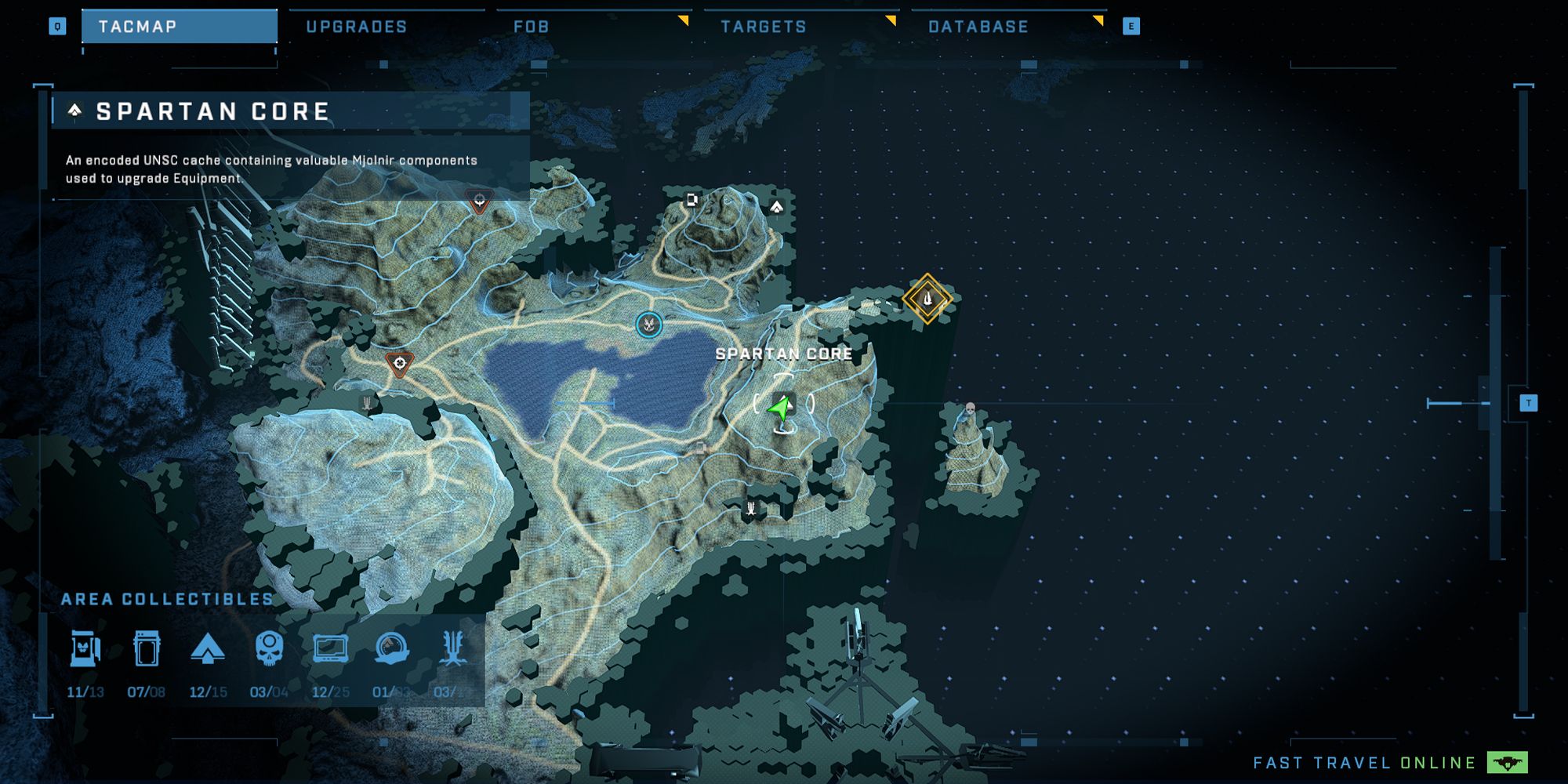 You can pick up this Spartan Core along the path to the eastern beacon. It'll be west of the small island below the beacon, which is also where you can find the Famine skull. 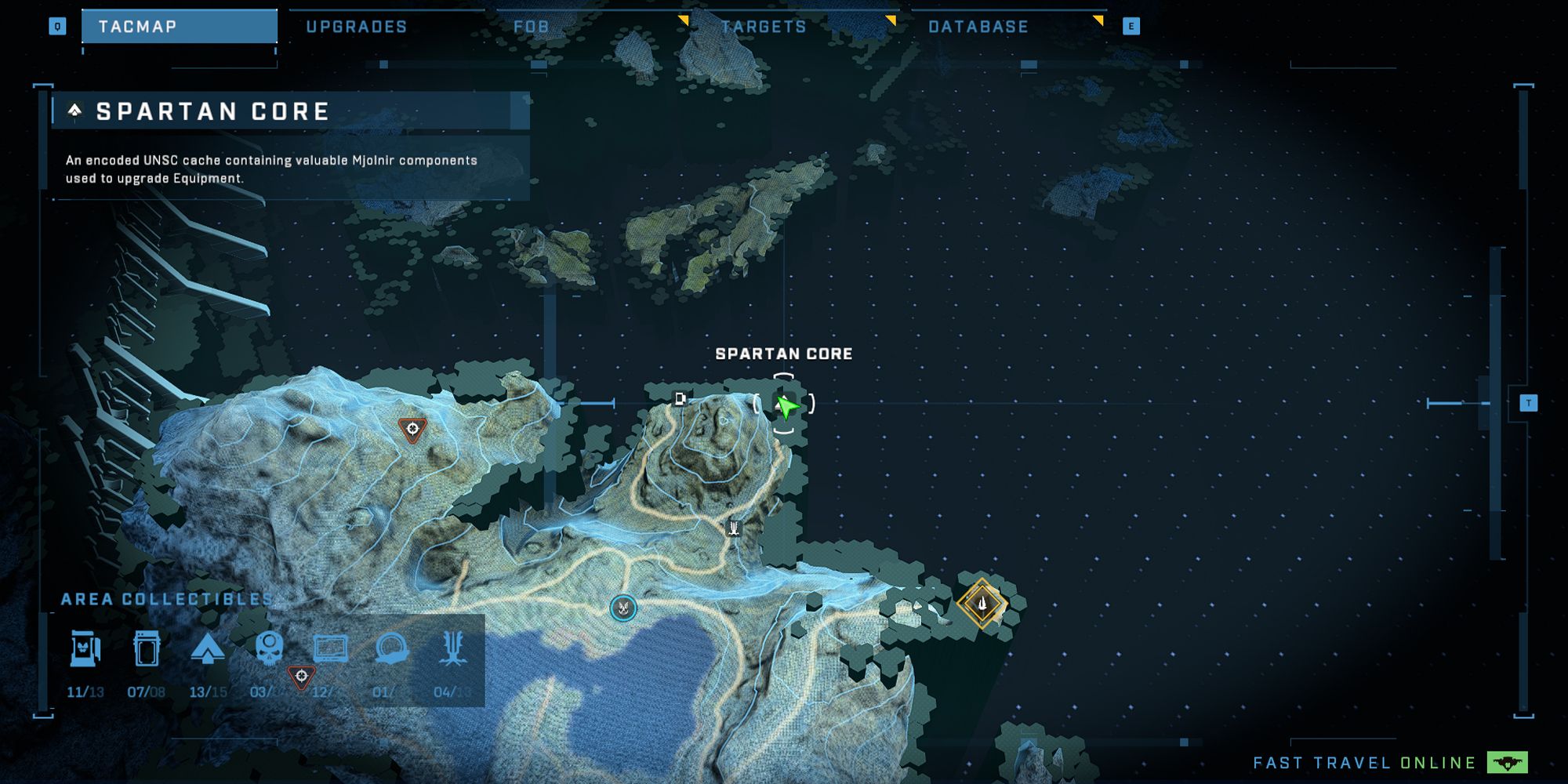 Head to the cliff that's northwest of the eastern beacon and the core will just be sitting there waiting for you. 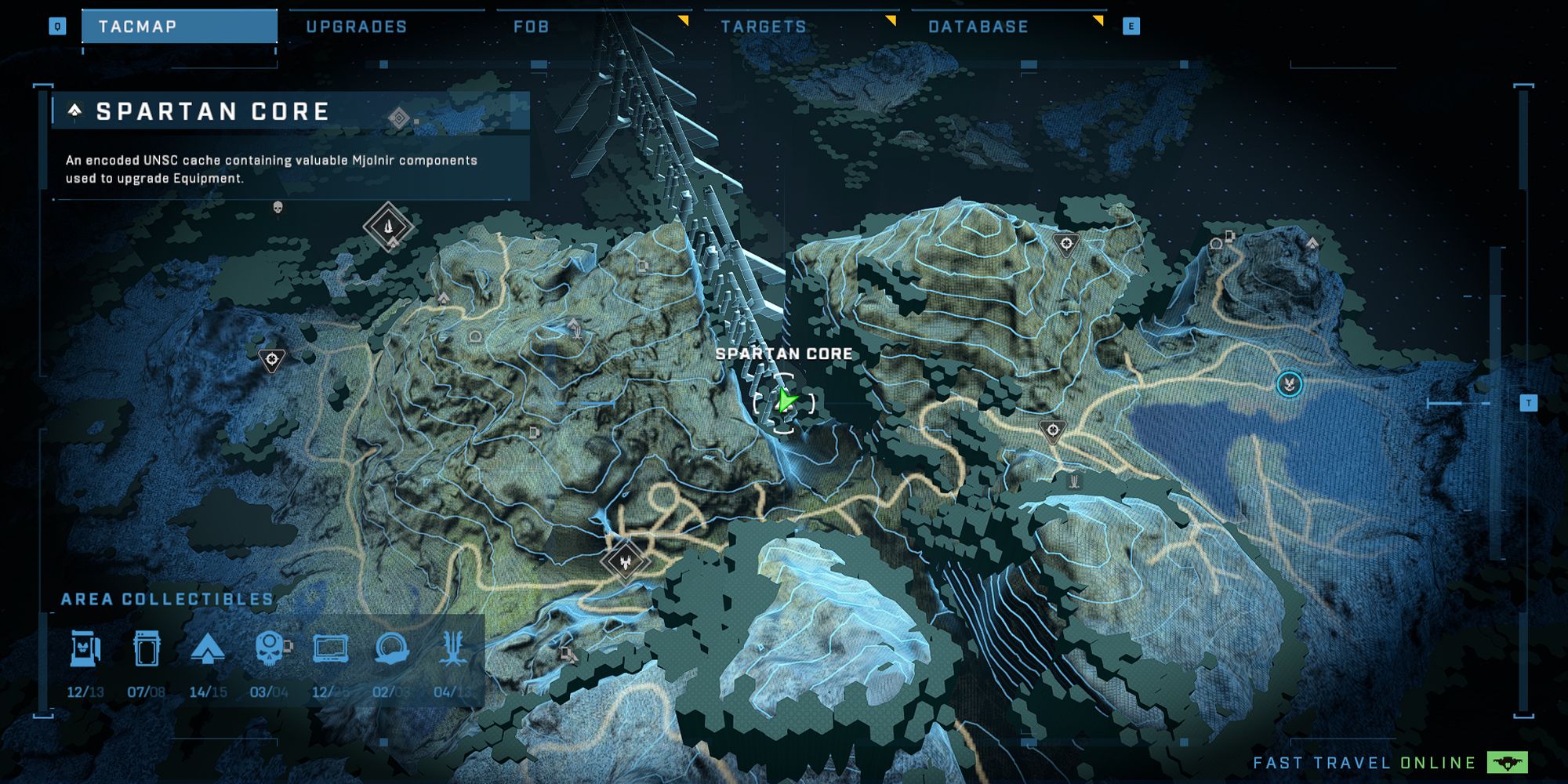 The 45th and final core is down in a canyon northeast of the Riven Gate outpost. You'll see some odd-looking metallic archways here. The core will be underneath the first of these archways.