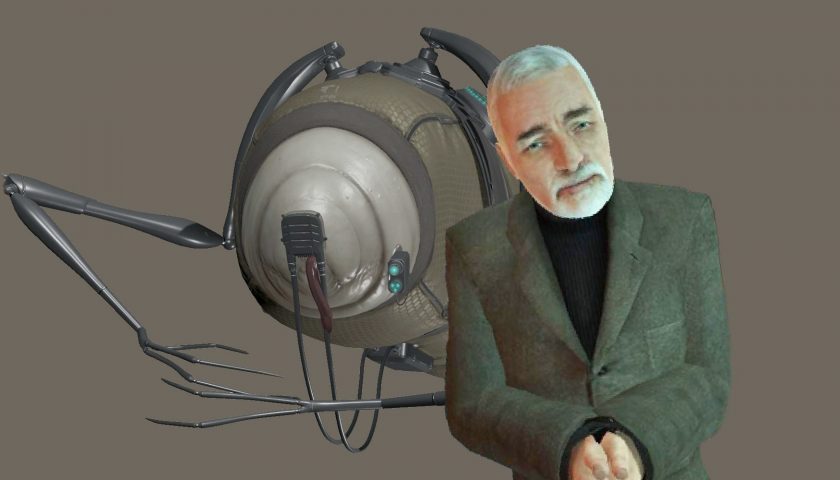 It's 2022 and we're still wondering about Half-Life 3, the mythical game that never surfaced. Epistle 3, comics, mods, fan-made sequels, and Alyx's time-travelling story have tied us over in the wait, but we're still waiting, ultimately. For now, we have some concept art for scrapped ideas that never came to light.

2K senior producer David McGravy showed off Breen Grub, giant sandy deserts, Alyx and Dog walking through a jagged mountain pass, and cliffside ruins of crashed ships by a dried-up ocean (thanks, Kotaku). Half-Life 3, or Episode 3, was going to be far more of a globe-trotting adventure, a huge shift from the confines of an underground science facility and a singular dystopian city.

McGreavy revealed that the art comes from a Valve employee who was getting rid of parts of their collection. He took some of the concept art and scanned it before sharing it with Kotaku. And thanks to him, we now know what Breen Grub would've looked like – an Antlion worm mixed with an Advisor and Breen himself. Unlike other Advisors, he has a more humanoid face, and even a thin limp arm stretched out. The idea of Breen Grub comes from the aforementioned Epistle 3, penned by former lead writer Marc Laidlaw. In a plot he shared back in 2017, he revealed that Breen didn't die in Half-Life 2 but instead 'evolved' into a Combine-like creature, a fate arguably worse than death if Stalkers and Combine soldiers are anything to go by. Though the rest of Earth didn't fare much better than its ambassador.

As you can see in the concept art above, the world has dried up, with mountain ranges crumbling and the ocean emptying, leaving behind vast empty fields of nothing but ruin and decay. Episode 2 teased that we'd be venturing to the Arctic in search of the Borealis, with Epistle 3 revealing that Gordon and Alyx would launch it into the Combine capital on a suicide mission, but we never got to see it in action. As it turns out, the Arctic was just one stop in Gordon and Alyx's next adventure.