If you’re sick of getting killed by a bunch of shades, you’re probably after a handy list of Hades tips and tricks to help you out. Fortunately, we’ve got you covered.

Tartarus, for those who don’t know, was originally designed as a place to imprison the Titans, so it’s no wonder that escaping the Underworld in Hades is really bloody hard. From heroes like Achilles and Theseus to the relentless Fury sisters who keep Hell’s inhabitants in line, many have wondered what it would be like to taste fresh air one more time. Unfortunately, all of these people eventually decided that getting battered by a Bone Hydra and waking up soaking wet in the Pool of Styx just wasn’t worth the hassle anymore. All of them except Zagreus, son of Hades, Prince of the Underworld, and self-proclaimed God of Nothing. 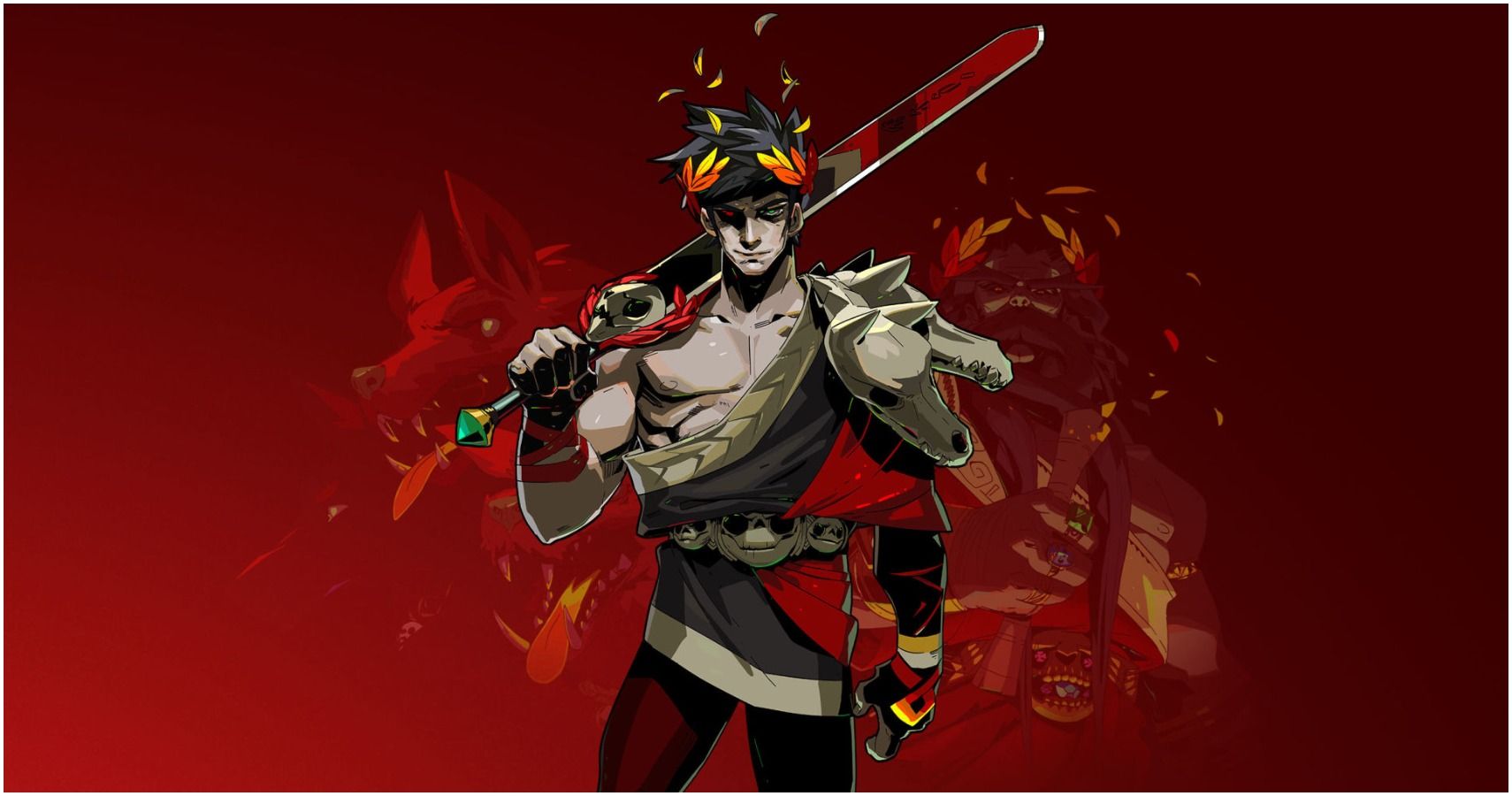 There Is No Such Thing As A Weak Infernal Arm

The Infernal Arms are the six weapons Achilles provides you with as you attempt to run away from home. While it’s obviously important to find out which ones suit your playstyle, it’s essential to note that none of these weapons are inherently bad.

If you’re the type of player to go in guns blazing, you’ll benefit from using the Twin Fists of Malphon, which eschew range for close-combat devastation, or the Stygian Blade, which is the first weapon you unlock but by no means the worst. Ironically, the actual gun in the game — the Adamant Rail — is the weapon you need if you don’t want to go in guns blazing, alongside the Heart-Seeking Bow. Both of these are ranged weapons, allowing you to minimize damage received while maximizing damage dealt.

The Eternal Spear combines both of the above, having a close combat strike as well as a ranged throw. The Shield of Chaos is similar, and comes equipped with the unique Bull Rush ability, which allows you to block all incoming attacks from the front before charging your enemy at lightning speed.

Ultimately, although you can divide Hades’ six weapons into three categories of melee, ranged, and hybrid, every single one of them is equally valuable. As a result, the single best thing you can do in order to ensure you’re increasing your escape potential to its maximum value is to practice with each one several times until you find a playstyle that is comfortable, reliable, and enjoyable to play. 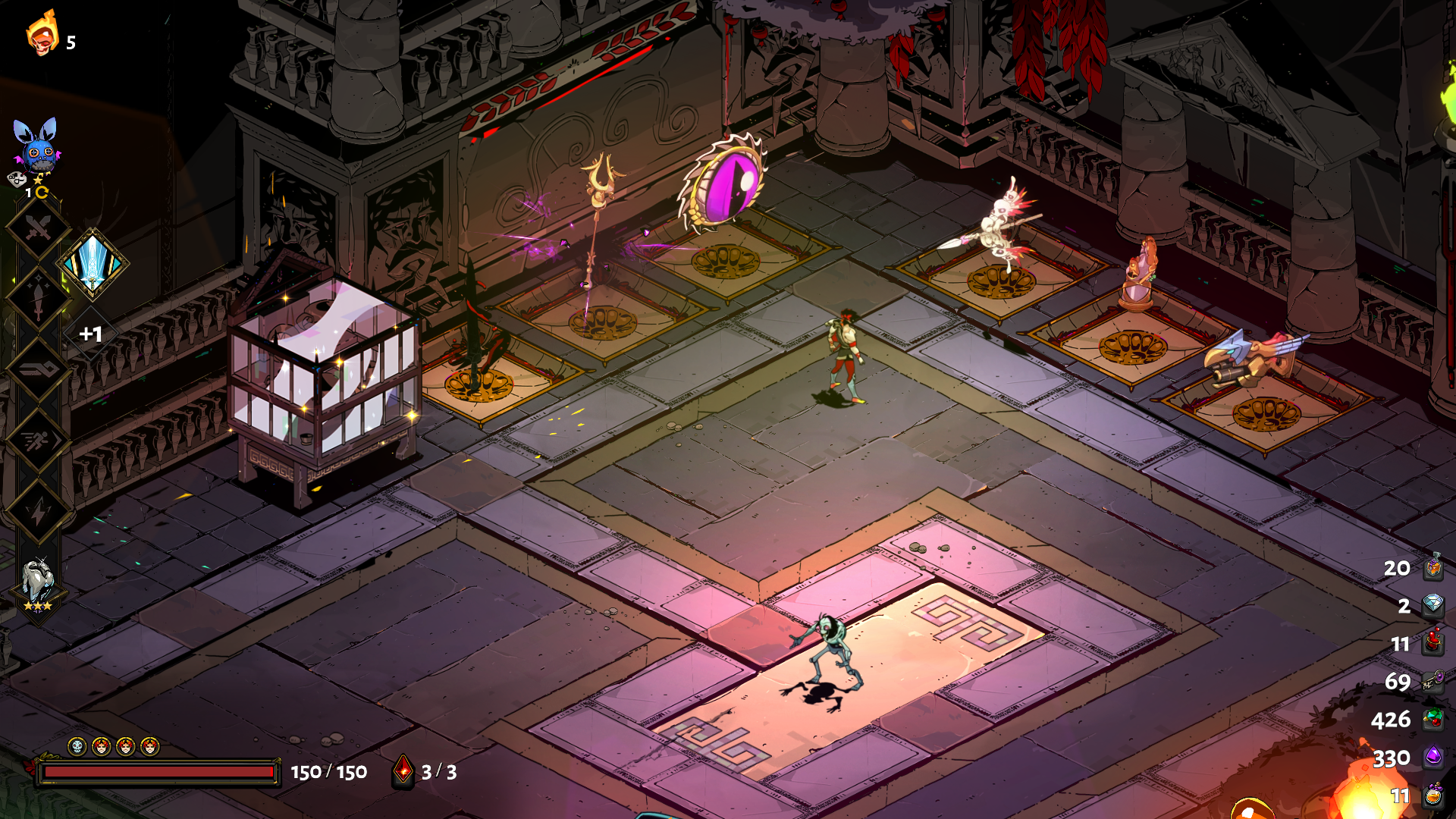 We recently published a piece on how Hades’ boon system is the primary reason for how replayable it is. Basically, Boons are the driving force behind Hades being a different game every single time you play — but in each individual run, you need to be consistent, clever, and coherent with your Boon selection.

Boons, for those who don’t know, are upgrades provided to you by the Olympian Gods. Demeter might enchant your sword with Chill, which will freeze all enemies you connect with, while Dionysus can give you Hangover arrows, which cause baddies to take damage from a severe wine headache.

You’ll often get your first Boon very early on in any given run — sometimes before you’ve even met a single enemy. When you collect this Boon, you’ll usually have a choice of three buffs. Obviously you can only choose one, and it’s important that you make that decision based on a combination of different factors.

For example, you need to make sure that you’re selecting a Boon that pairs well with your current weapon. Ares’ Doom damage stacks remarkably well with aggressive weapons like the Twin Fists and the Stygian Blade, but is less beneficial if you’ve got a Heart-Seeking Bow with Explosive Shot because that already does enough base damage to take out enemies in a single hit. Knowing which Boons pair with each weapon is something you pick up from practicing over and over again — and once you figure out what works for you, you can start creating distinct builds. 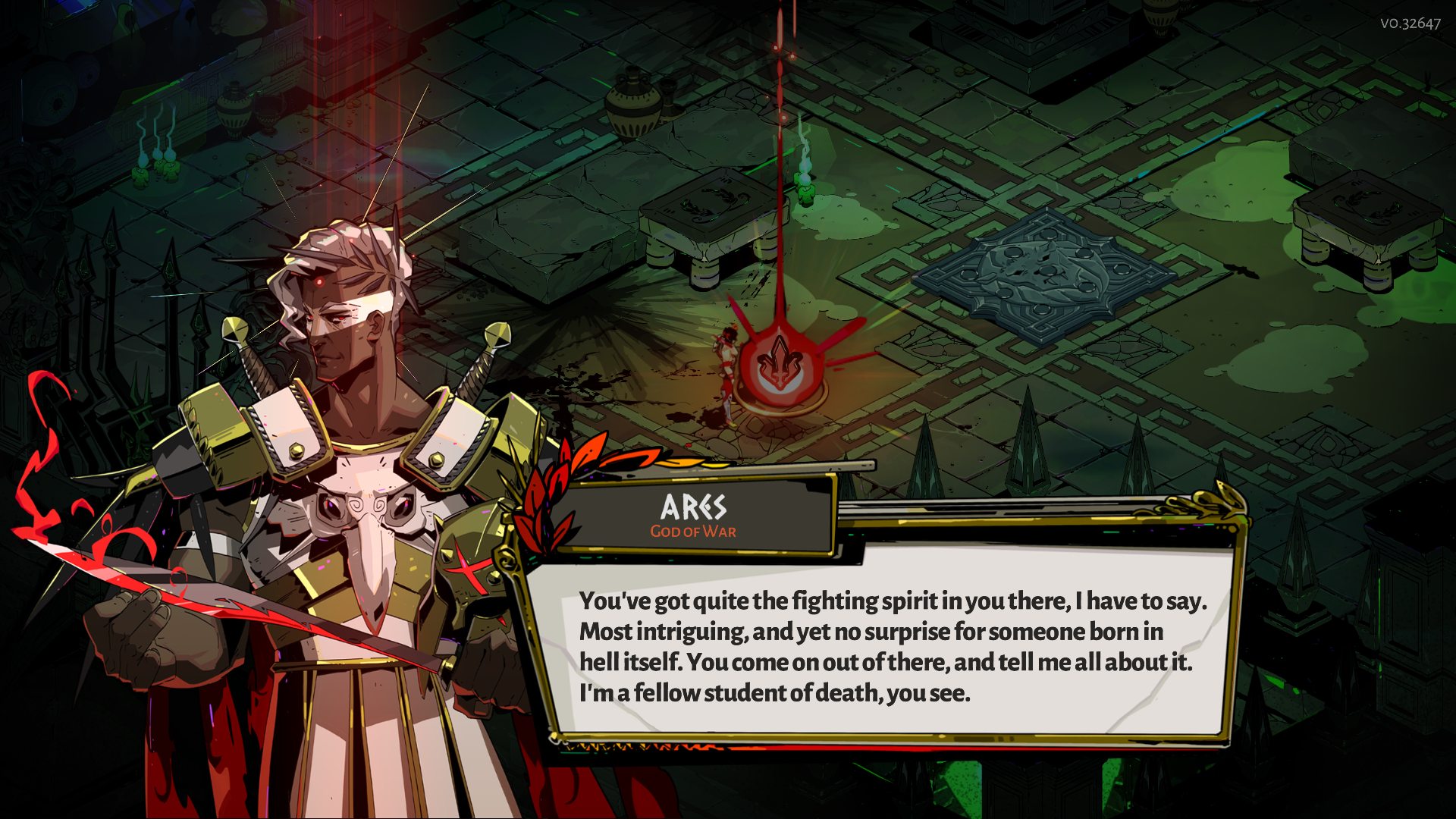 Here’s one I used yesterday: After a certain amount of playtime, you’ll eventually unlock a hidden version of each weapon. This is because weapons have Aspects, meaning they can be changed into one of four distinct forms — which technically means that there are 24 possible weapons in Hades, as opposed to the ostensible six.

Anyway, I used the Stygian Blade with Aspect of Arthur, which is devastating at close range because its Special — which essentially means its heavy attack — causes all enemies within a certain radius to take extra damage. Combining Zeus and Poseidon Boons meant that I could use the Special, knock enemies into walls with basic attacks, and cause them to get struck by lightning for every hit. The high base damage combined with the Aspect of Arthur attack increase and dual-Boon build meant that I was able to obliterate even the toughest of enemies in just a few swings — it helped that the Aspect of Arthur Stygian Blade can also be upgraded mid-run, if you’re lucky, to a version that restores 2HP every time you hit a bad guy.

There’s a currency in the Underworld — as a matter of fact, there are a few of them. But when you’re in Tartarus, or Asphodel, or Elysium after having stormed out of the House of Hades in a big huff, you’ve got to collect Charon’s Obol, which can be spent on HP-restoring food, extra Boons, max life increases, and more.

I’m not exaggerating when I say that there is rarely a reason to buy anything from Charon’s shop in the first two realms of the Underworld, Tartarus and Asphodel. If you’re in desperate need of HP, or you have a particular reason to gamble on one specific Boon type, it might be worth spending a small amount of cash — but, as a rule of thumb for most of the time, it never really is.

When you get to a certain point in Hades — which I won’t spoil — you will have the option to buy a rare item, and five different choices randomly comprised of Boons, Daedalus Hammers (which can be used for weapon upgrades), Boon power-ups, max life increases, and Anvils, which sacrifice one weapon buff in order to apply two new ones. 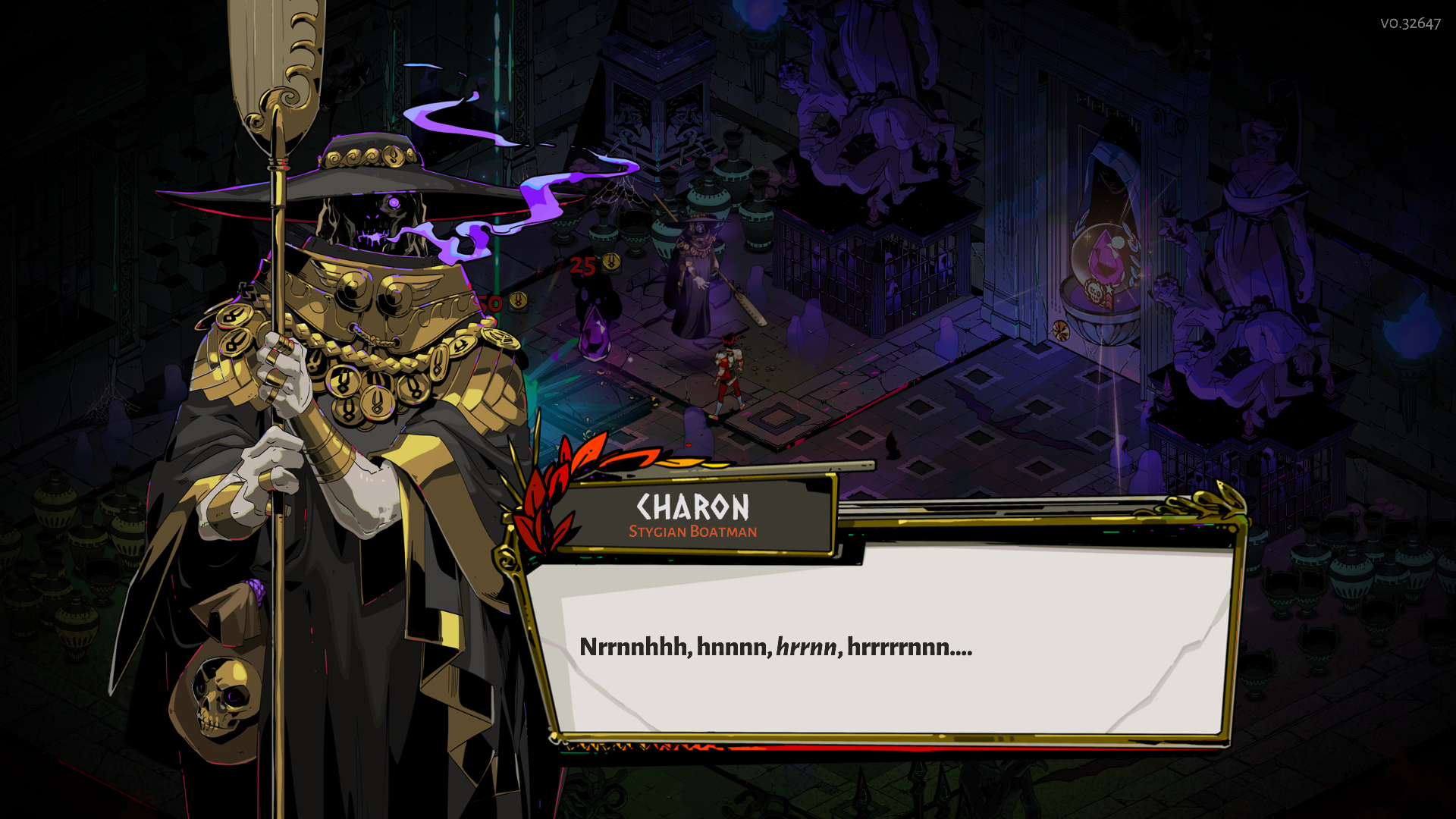 It is not only helpful, but essential that you have at least 800 obol at this point — otherwise you’re going to move on to an incredibly tough section of the game without being properly prepared. It’s also useful to never go below 200 obol here, because the chambers are remarkably tough to progress through, and you might be able to buy an extra Death Defiance — basically an extra life — if you happen upon a random Charon’s Well.

Also, if you really want to save money, keep an eye out for Hermes’ Side Hustle Boon. It gives you 10 obol every time you go into a new chamber, and can give you up to 13 per room if you get a rarer version. Given that there are 69 chambers in Hades, Side Hustle can potentially net you a lot of cash, especially if you use Darkness — a power-up currency that provides you with permanent skills — to ensure you start every single run with 100 gold in the bank.

Ignore Gems, It’s All About Cthtonic Keys (At The Start)

On top of Boons, Daedalus Hammers, Centaur Hearts, and more, you’ll often find chambers where the reward is either Gems, Darkness, Nectar, or Cthtonic Keys. All of these items are useful — Gems can be used to decorate the House of Hades, Darkness can be spent to upgrade certain skills, and Nectar can be gifted to other characters in order to become mates with them.

But Chthonic Keys are the most important one to get at the beginning, because they allow you to unlock new skills on the Mirror of Night, which Zagreus uses to make himself stronger.

You’ll want to collect as many Cthtonic Keys as possible in order to unlock all of the skills on the Mirror of Night, which you can then purchase using Darkness. Eventually you’ll have enough Darkness to just buy everything, but the one you want as soon as possible is Death Defiance, which allows you to come back from the dead at 50%HP instead of falling on your arse and waking up in the House of Hades all over again.

You can get three Death Defiances, which cost 30, 500, and 1,000 Darkness respectively, meaning that you’ll need to accrue 1,530 in order to get as many lives as possible. 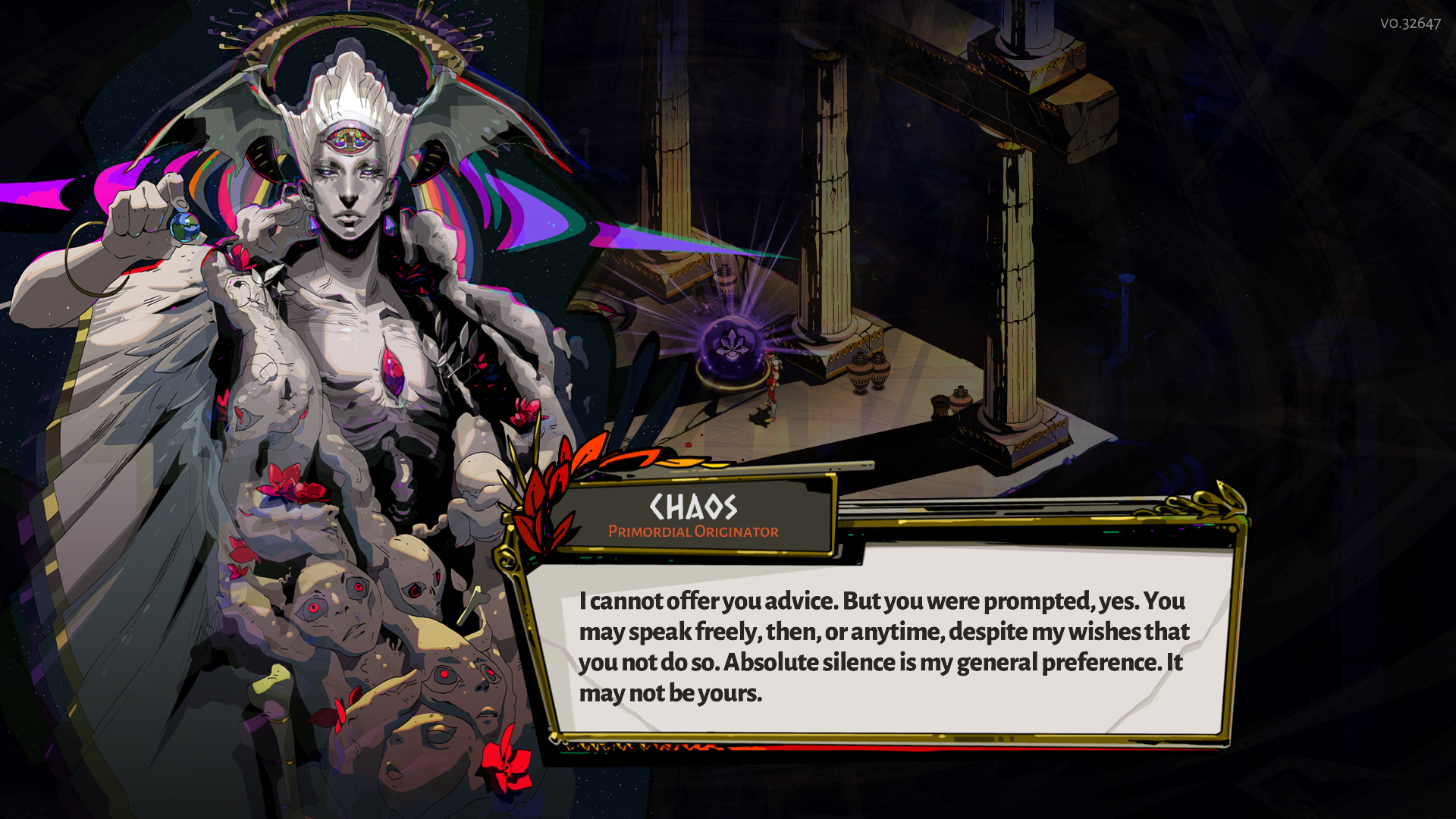 You can also get one more Death Defiance by giving Skelly — the weird skeleton who hangs out in the courtyard — a bottle of Nectar. He gives you the Lucky Tooth in return, which you can use to gain a fourth Death Defiance. There’s also a chance of getting a fifth and final Death Defiance from Chaos if you’re fortunate enough to be offered his Legendary Boon — which is extremely rare.

Don’t Forget To Hang Out In The House Of Hades

Okay, so this won’t have much of an impact on your runs. But it’s important to remember that Hades isn’t all about the combat — in fact, the majority of the narrative unfolds after each time you die, so failing to escape is what initially propels the narrative forward.

If you don’t talk to the House of Hades’ residents, you’ll end up knowing precious little about the world around you. It’s important to develop your relationships with Achilles, Thanatos, Megaera, and even Hades himself. You can even hang out with Cerberus, if you’re into three-headed pet dogs — which, from following the Hades community, pretty much everybody is. 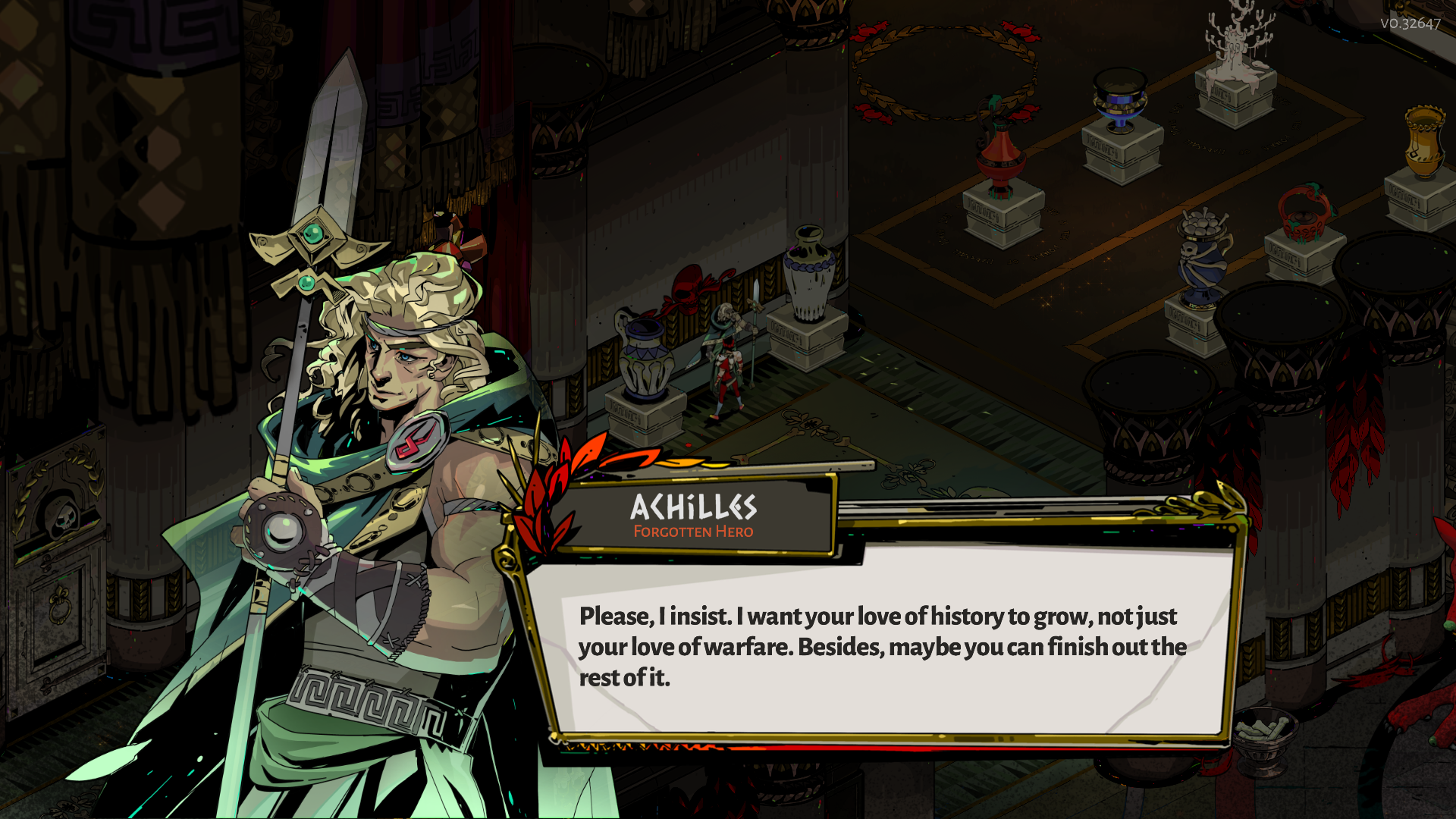 Anyway, while it’s important to practice with different weapons, experiment with different builds, and devise tactics to minimize deaths and maximize Boon potential, you still need to carve out some downtime to make friends with the Underworld’s inhabitants and explore the mysteries of your dad’s chthonic gaff. Once you remember to do that, you’re all set. Just remember that Cerberus is a good boy and even the more annoying tenants in the House of Hades can be sound sometimes.

Baby Yoda Lego Set: Build Cutest Baby With Bricks, You Will
We and our partners use cookies on this site to improve our service, perform analytics, personalize advertising, measure advertising performance, and remember website preferences.Ok