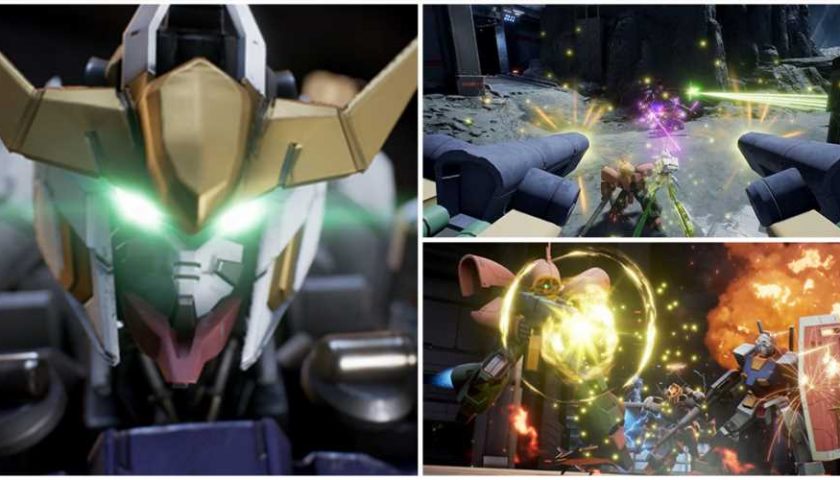 Even if you're heavy into them or have never seen a single piece of media containing them, the undeniable truth is that Gundams are cool and always will be, which is why Gundam Evolution is such a fun and exhilarating experience. While running around and wreaking havoc as a towering mech will always be fun, some Gundams look cooler doing it.

Whether it's the Gundam's overall design, the weapon of choice, or a mix of the two, some just look much flashier and more stylish than others. Sure, looking cool won't help you emerge victorious in battle, but it will help your chances of climbing this list, which is far less important. Nevertheless, let's determine which of the seventeen Gundam Units is the best-looking! 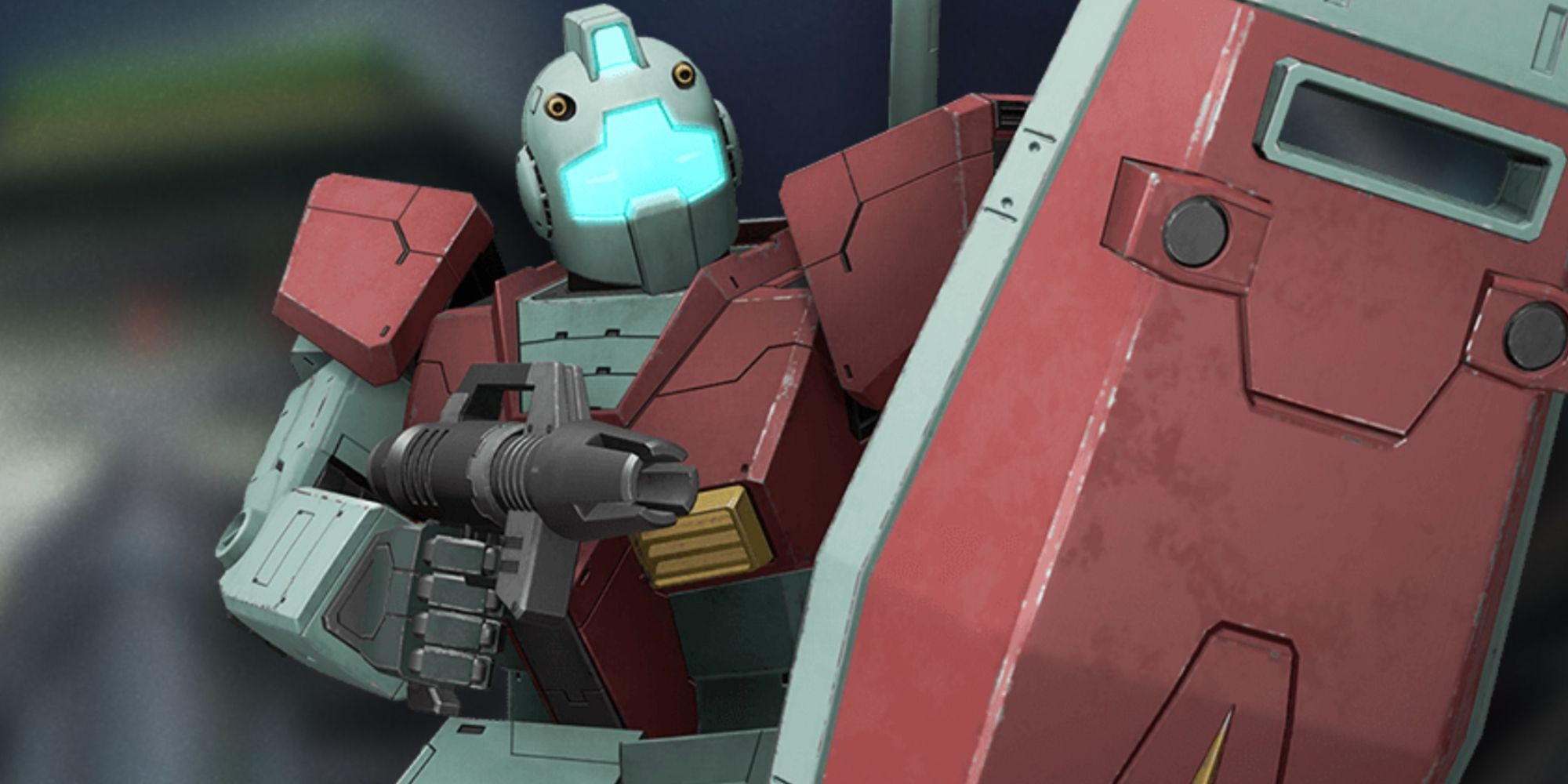 While someone out there surely fell in love with the design of the GM Unit, it belongs at the bottom of this quite lengthy list due to it looking much more bland and cheap compared to the others. Now, its combat prowess far exceeds its looks. We just wish it had a bit more personality.

However, we will state that its Beam Spray gun is quite solid, and its shield allows you to stay in the battle a bit longer than usual. The visor is also quite good, displaying digital eyes that convey emotion, which is always a nice touch on Gundam Units. 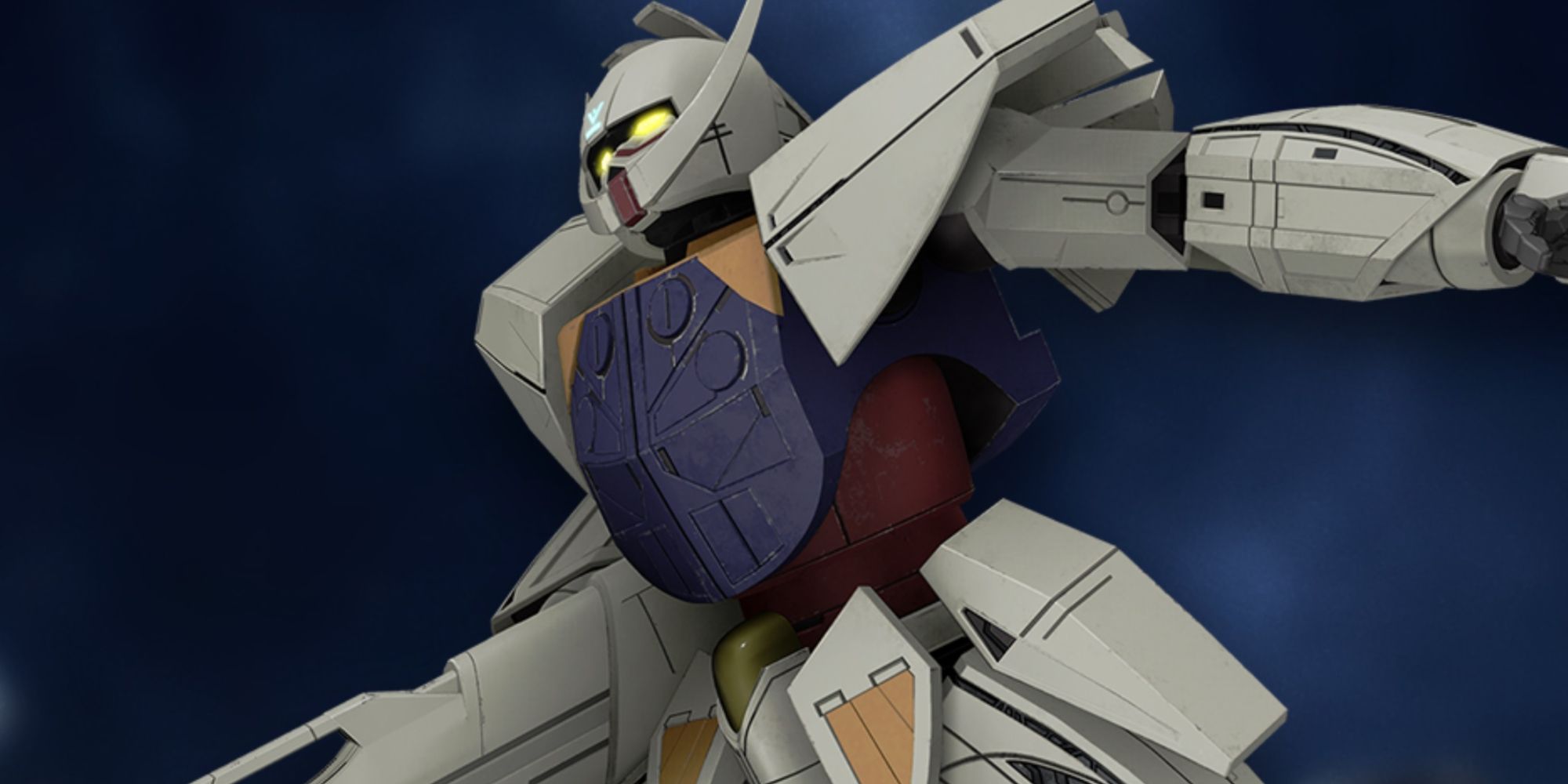 Next up is Turn A Gundam, which comes armed with an enormous Beam Rifle and can sprout colorful butterfly wings to maneuver around the stage. On paper, this Unit is one of the best designs in the game, but its overall design does lack in a few areas that place it this low.

Make no mistake, Turn A Gundam is leagues ahead of the GM Unit in terms of the overall design, but it looks a bit flat compared to the other Gundam Units in the game. If its brilliant wings were on full display more often, perhaps it would be much higher. But, as it stands, it will have to settle for the second to last spot. 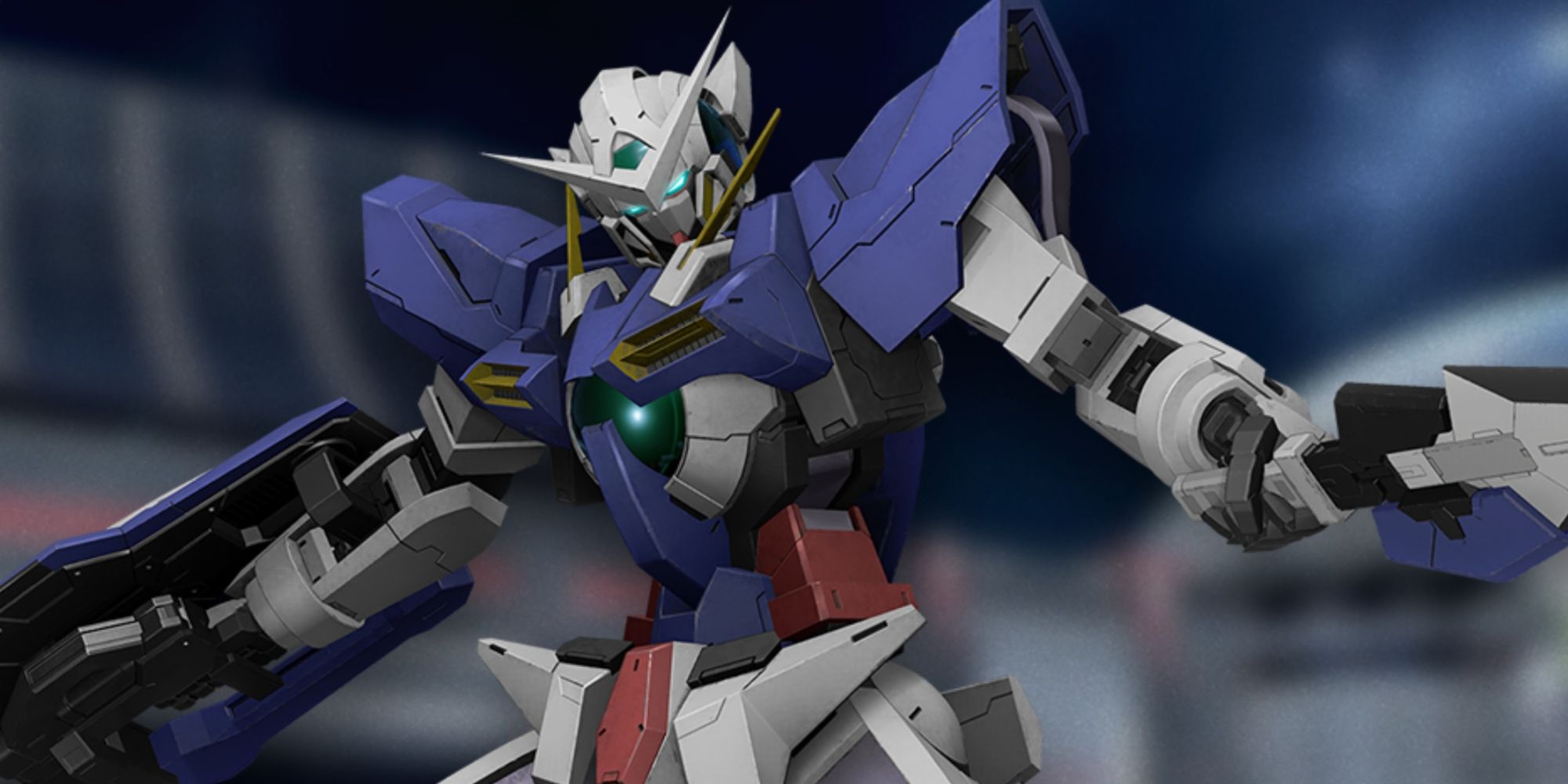 Gundam Exia is our next Unit on the list, sporting a pretty cool look overall, but not when compared to the heavier-hitters we will get to a bit later on. While we love the large core in the middle of the Unit's chest and the fact its primary weapon is throwable GN Beam Daggers, the rest of its design misses the mark.

There is an argument to be made for its massive shoulder pads and defined helmet, but we feel other Units pull that off slightly better, which unfortunately puts Gundam Exia further down in the rankings than we'd like. Still a solid overall Gundam, though, and no one can take that away! 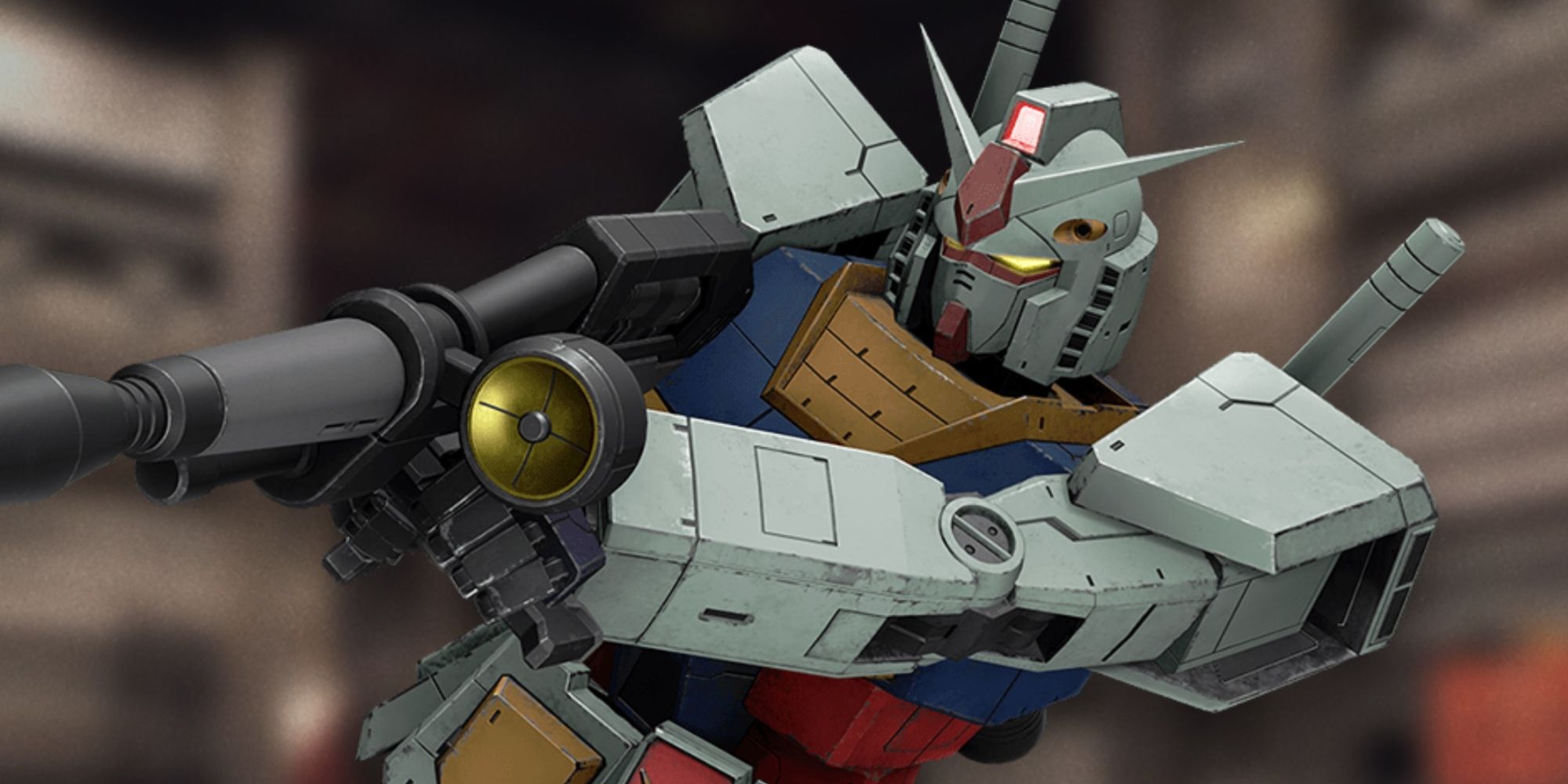 Being the titular Gundam Unit in the Mobile Suit Gundam anime, we feel placing the aptly named Gundam so low will ruffle some feathers, but when most of the other ones look so rad, we think this is where it ultimately belongs.

Gundam's look is classic, without a doubt, and will undoubtedly still turn heads on the battlefield when fans of the series run into it, but it also lacks that extra flare and intricacies that the others have. All that aside, the Gundam Unit is still an absolute powerhouse and deserves respect. 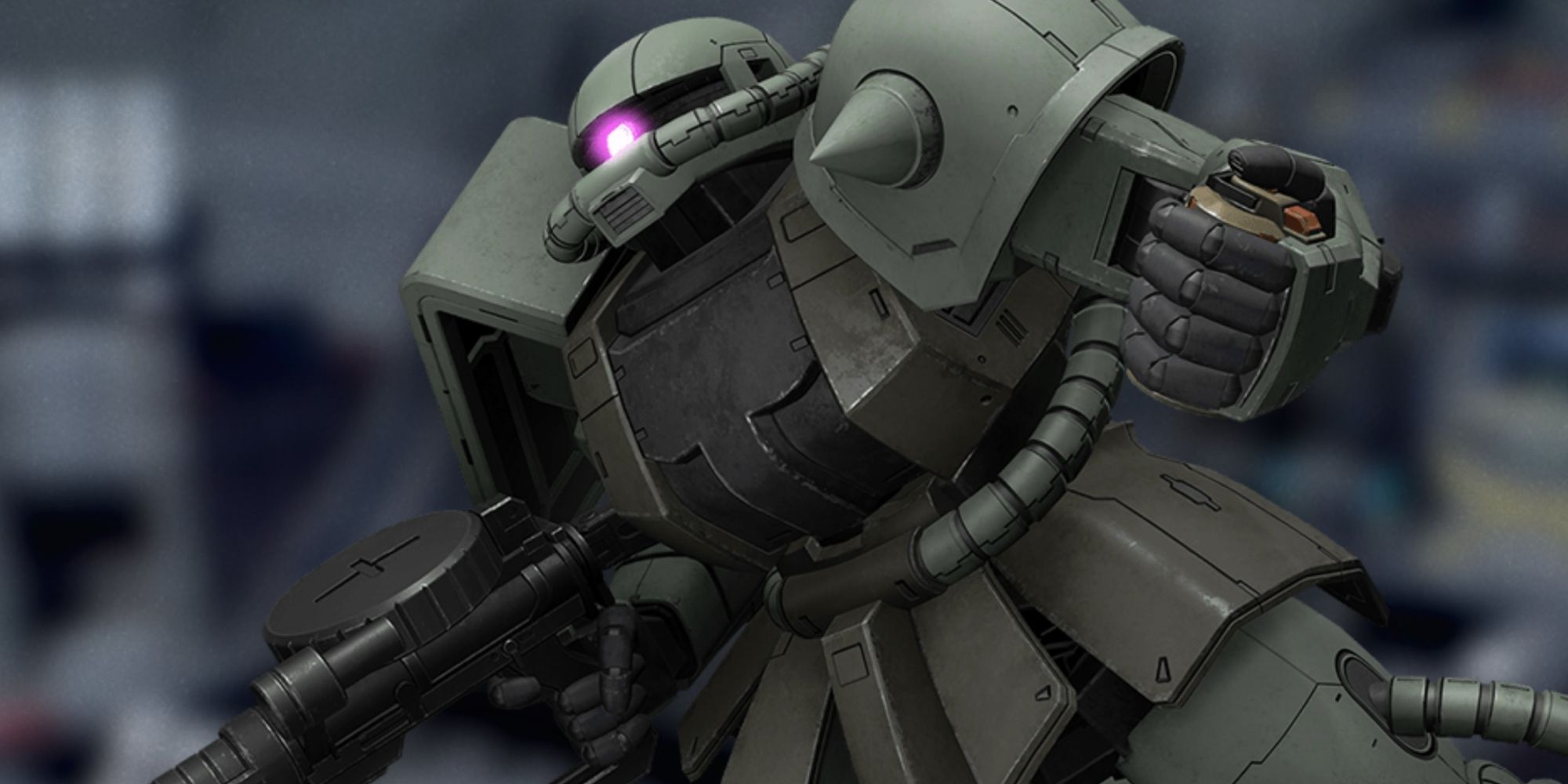 The overall design of the Zaku II Mobile Suite is quite awesome, but the Ranged variant of it lacks the extra bells and whistles of its Melee counterpart, which does everything much better. Still, the spiked shoulder pad, the slick and forboding visor, and the bulkiness make this design stand out.

If the Melee version of the Zaku II was absent from the game, you can rest assured this would be much higher. Nonetheless, it's in Gundam Evolution and looks absolutely pristine, unfortunately tanking the Ranged variant's placement. 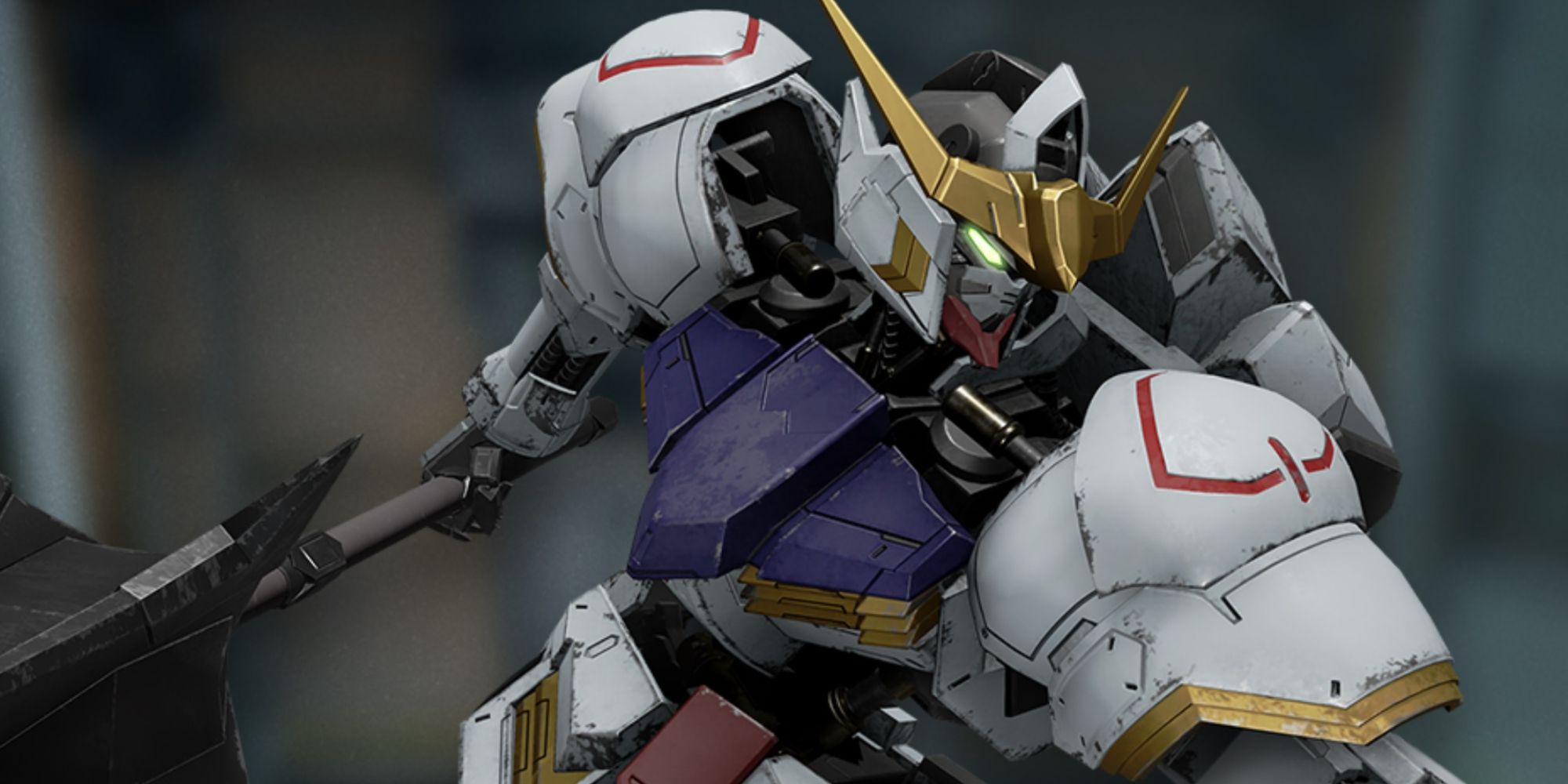 Speaking of melee-based Units being better than the Zaku II Ranged one, enter Gundam Barbatos, the Mace-wielding powerhouse that looks fantastic in Gundam Evolution. The smooth shoulder pads, the jagged helmet and chest, and the excellent use of colors make this Unit hard to hate.

Unfortunately, the reality is that the other units do what Barbatos does but better in most every way, which is why we had to slot it so low. Like the others, aside from GM, Barbatos has a solid look that commands attention and respect. It just slightly falls to the others remaining. 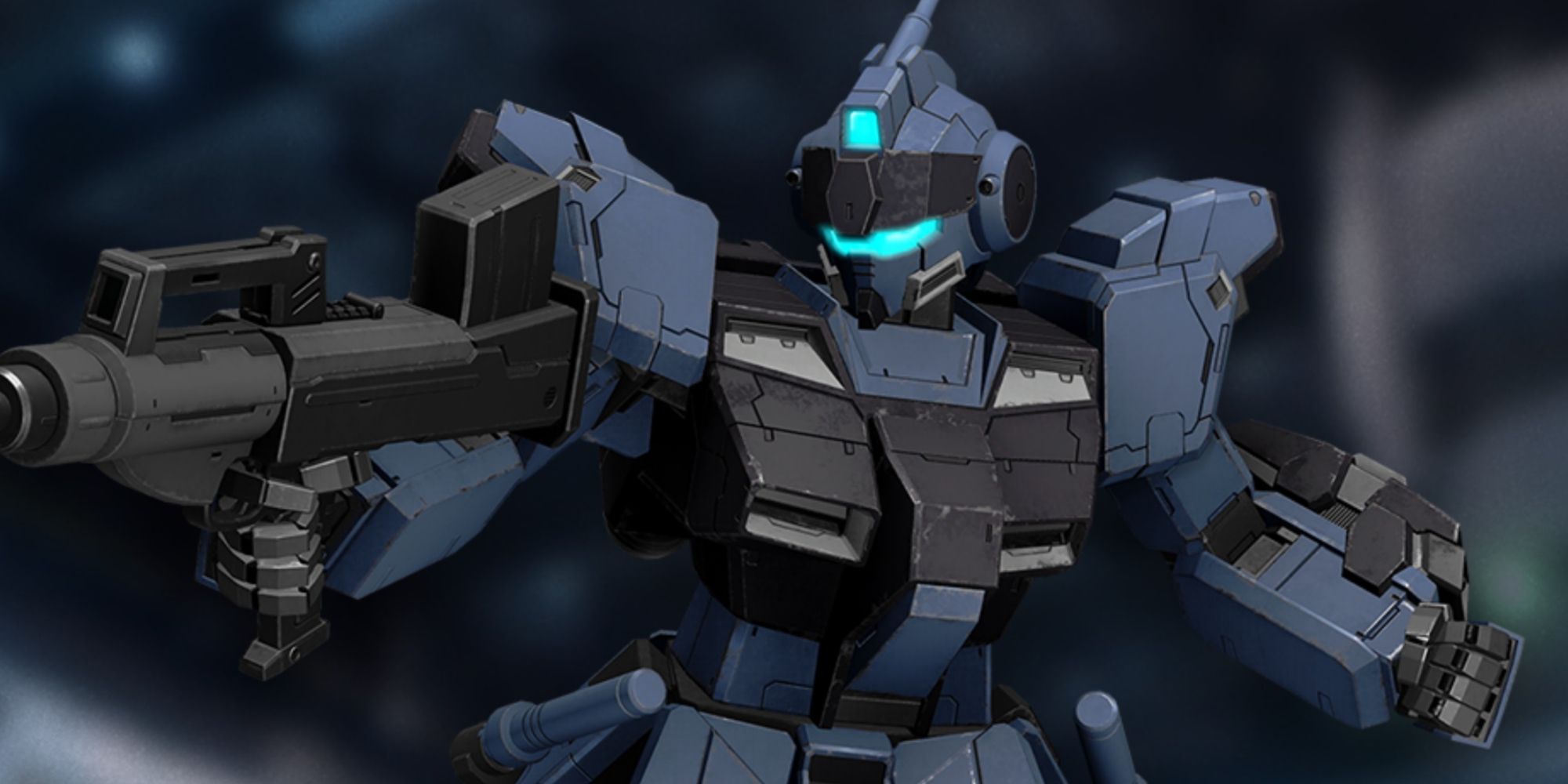 Arguably one of the strongest Units in the Gundam Evolution is Pale Ride, the default Unit of the game that has a wide range of useful abilities to help their team out in crucial situations. But, enough about that, we're here for the Unit's look!

So, Pale Rider is in a unique situation, where its sleek and stealthy design looks incredible, but its overall design somewhat falls on its face. While its helmet is phenomenal, the chassis and shoulders are a bit generic looking, which is why it barely misses out on the top ten. 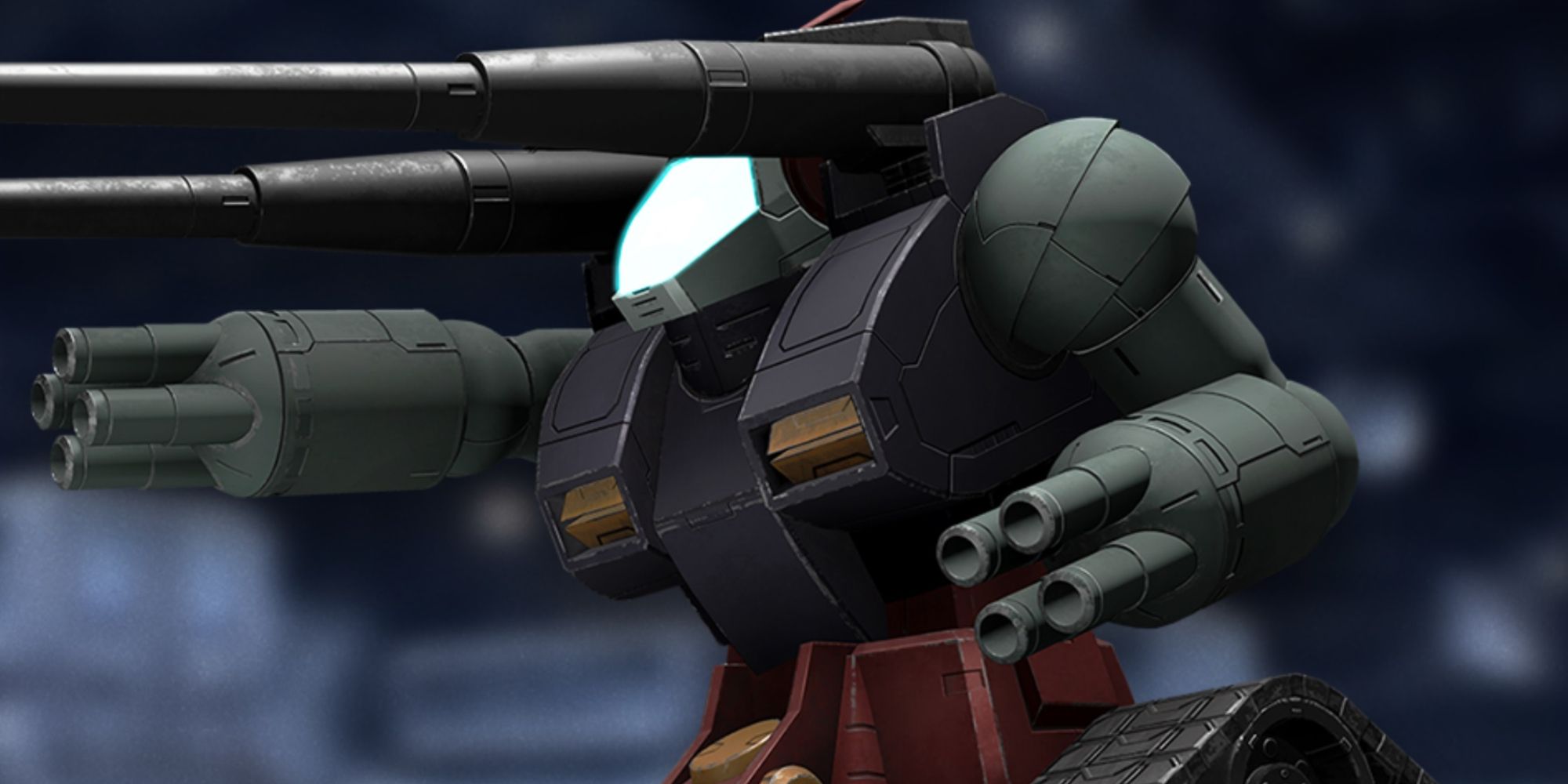 Guntank, however, cracks open our top ten with one of the more unique Unit designs in the game. Its Bop Missile arms and large tank cannons mounted to its shoulders are incredibly cool. This Unit is also surprisingly smooth-looking for being a tank and all.

Furthermore, this Mobile Suit is also fitted with caterpillar tracks, making it look so much cooler as it moves through the stage, blasting away at the opposition. The Guntank is an excellent Gundam and absolutely deserves to be in the top ten of this list. 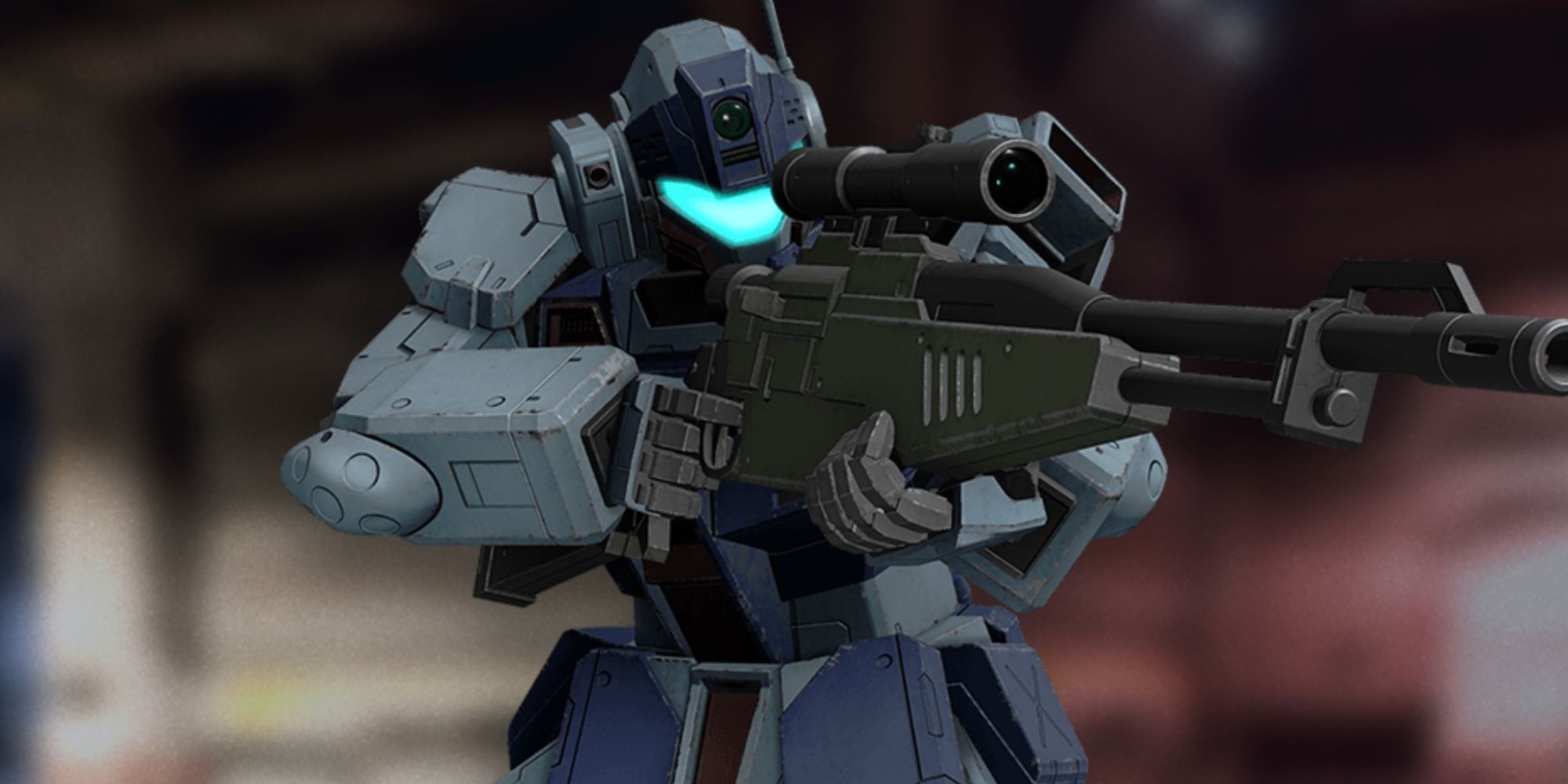 Perhaps a bit reminiscent of the Pale Rider Unit earlier in the list, the GM Sniper II is a far better execution of the sleek, slim, and stealth-looking Gundam Unit. We love the dark blue body with the light gray accents and how the helmet looks like the Recon Helmet from the Halo series.

Everything about the GM Sniper II Unit looks excellent, especially with the Sniper Rifle drawn and scoped in. There's no doubt that this Mobile Suit is amongst the best in Gundam Evolution and deserves the attention it gets in matches. We just which its gauntlets weren't so bulky. Otherwise, it would probably rank even higher. 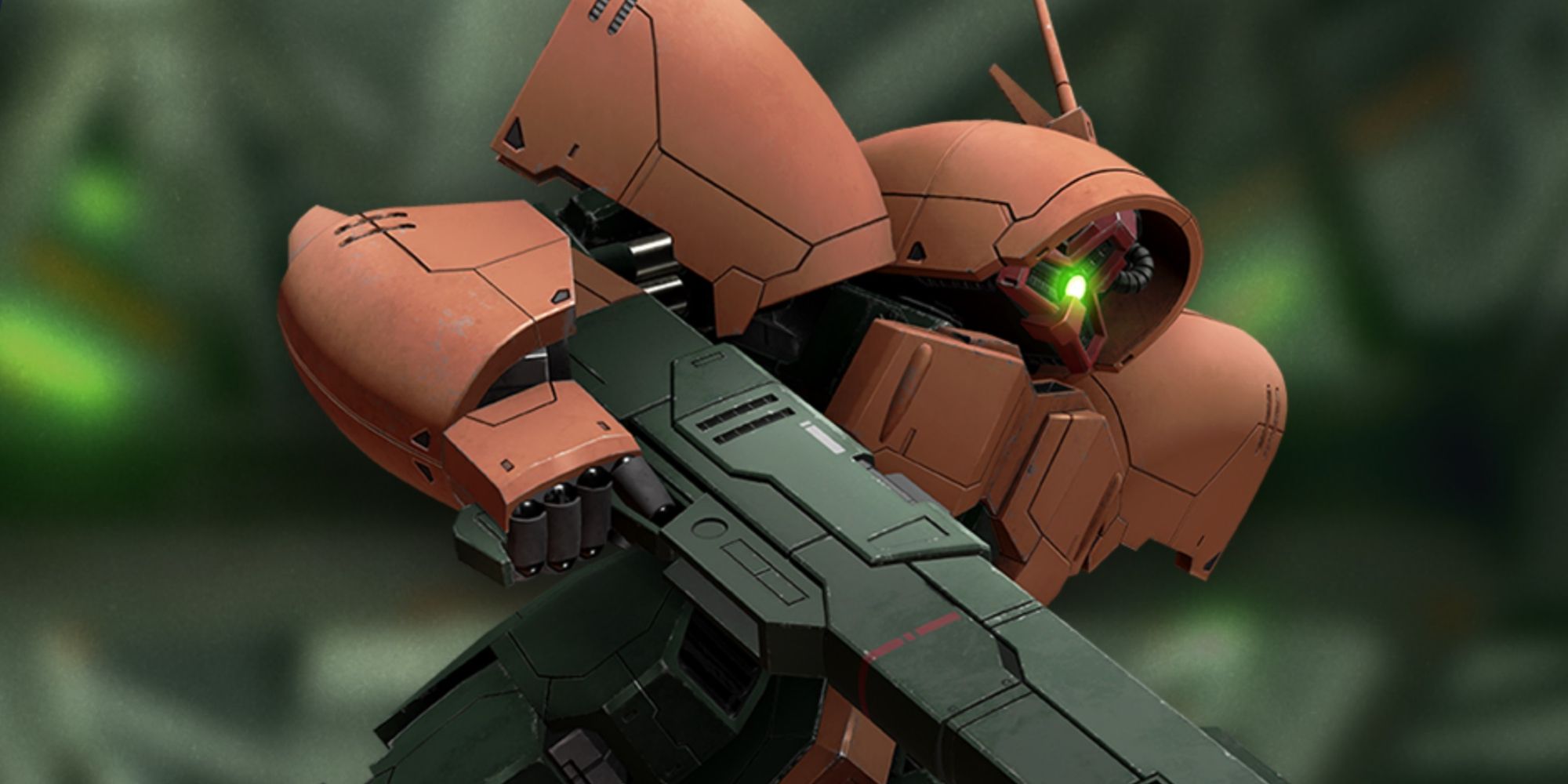 Are you ready for some bulky Gundam Unit love? Well, ready or not, here's Asshimar, the Large Beam Rifle-wielding powerhouse that can take a beating while dishing it out. We cannot understate how beyond cool his hood-like helmet looks and how the ominous singular green eye illuminates from underneath it.

Additionally, this is how you handle bulky-looking Units in Gundam. The shoulders and gauntlets are proportionate to the body, and the chest also works well with everything. When everything is consistent in terms of armor design is when these Mobile Suits really start to shine, which you will see more frequently from this point onward. 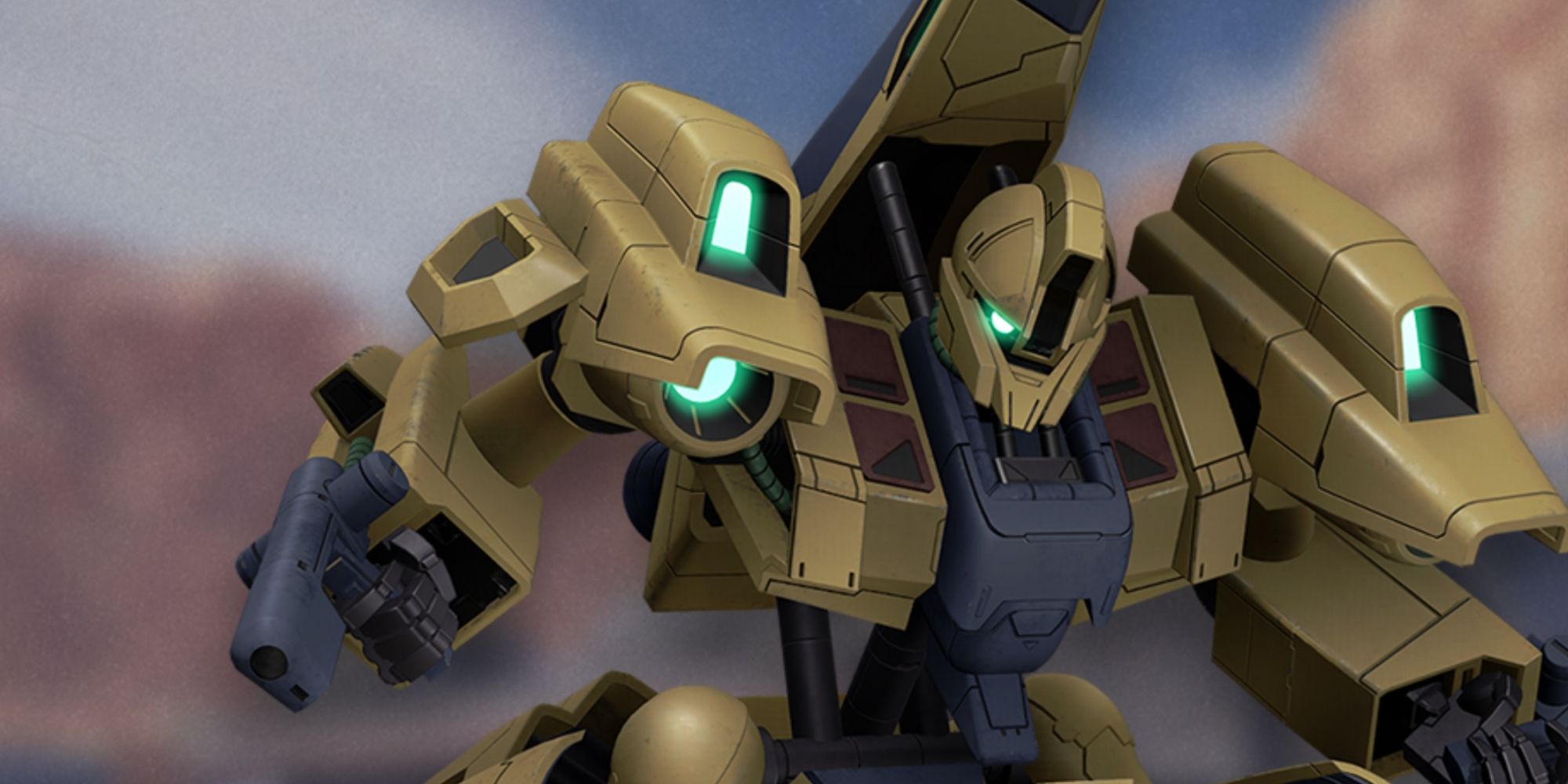 Keeping the bulky Mobile Suit run alive is Methuss, a Unit that dual-wields Arm Beam Guns and looks incredible while doing it. Methuss has a helmet that loosely resembles a spartan but pairs it excellently with enormous shoulders and a broad chest to help it withstand incoming attacks.

Methuss' bronze-ish color also goes hand-in-hand with its spartan inspiration, but it's done so subtly that it blends in very well with the more modern and bulkier design that a Gundam of this caliper should be. Overall, there's not much to hate about Methuss. 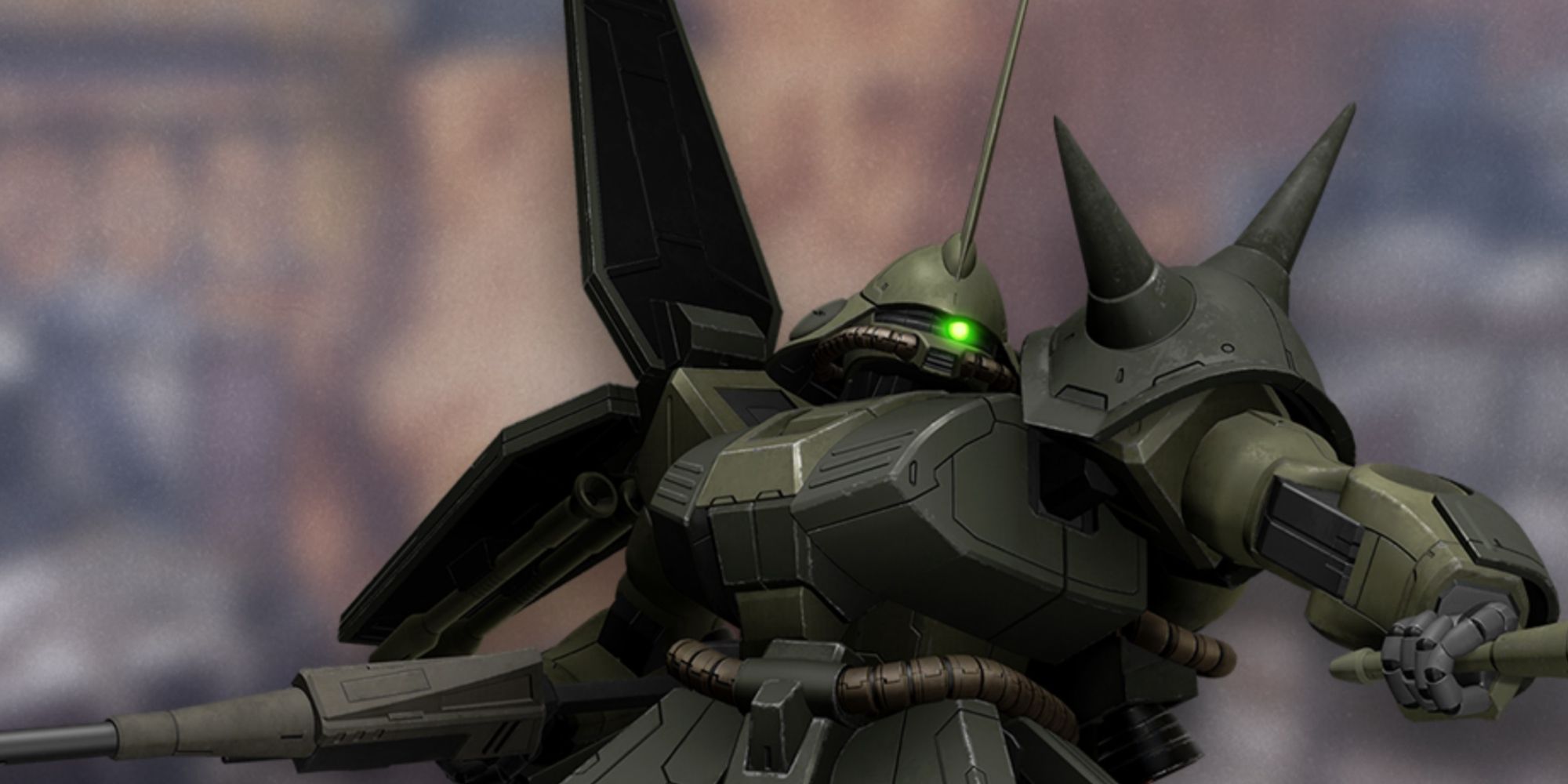 Following Methuss is another bulky Gundam, Marasai [UC], a samurai-inspired Mobile Suit fit with an uwa-obi and all. While this Unit is undeniably sick looking, there is one other samurai-inspired one that does everything much better.

Still, that doesn't mean we cannot praise the design of Marasai [UC]. Though, it does mean that it will be just shy of cracking the top five. Nonetheless, this Mobile Suit is incredible in every way, from its spiked shoulder pad to its incredible kabuto and beyond. 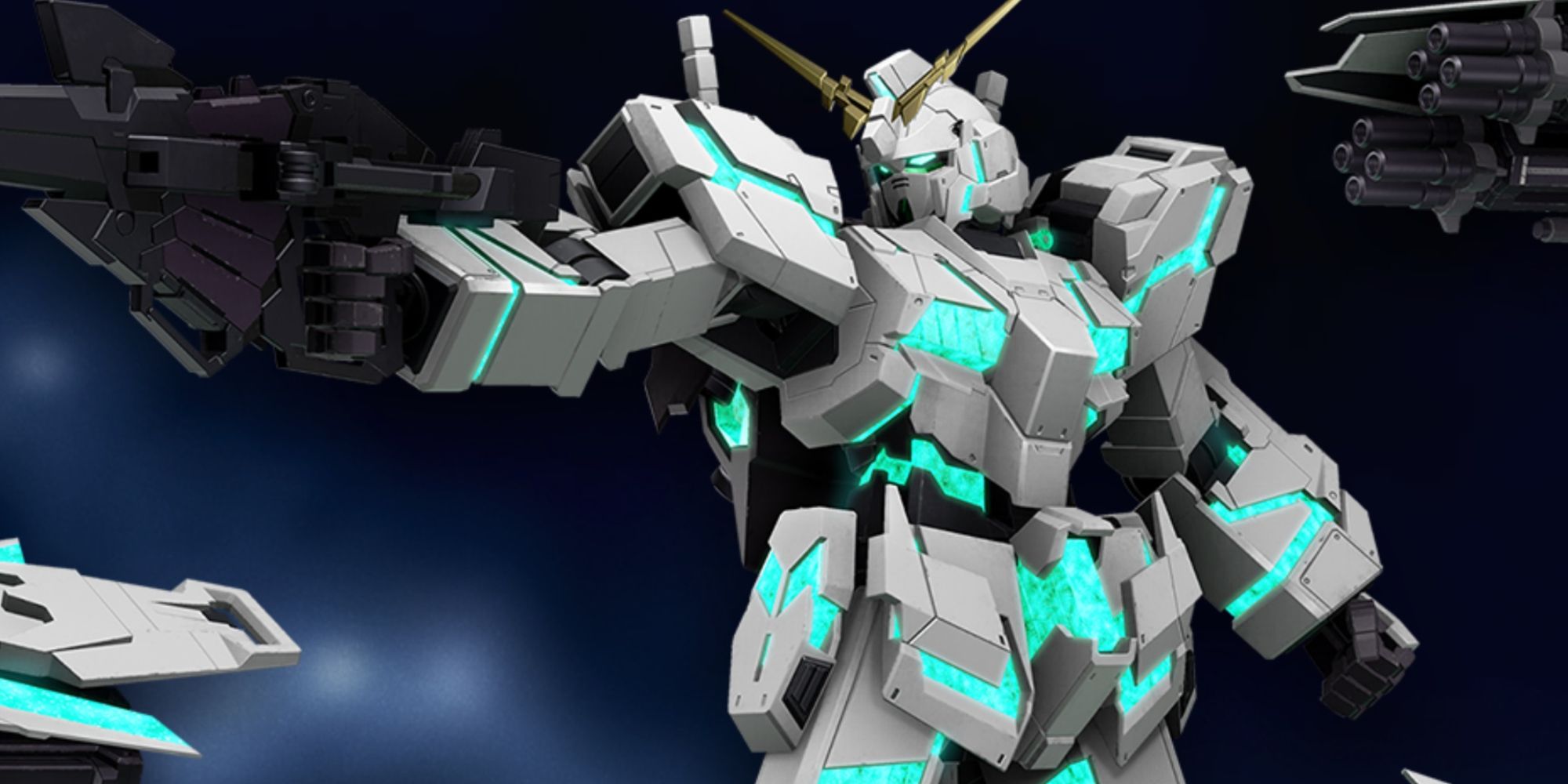 Breaking in our top five is the one and only Unicorn Gundam, which features a clean white and cyan color scheme over top of a bulky body type. Its Beam Gatling Gun punches through enemy Units with ease, and its solid build gives it modest health, allowing it to stay in battle for longer durations.

There's not much to hate on with this Unit without being overly nitpicky, so we're not going to focus too much on that here. This color scheme is by far the best default Skin in Gundam Evolution, though, and it sticks out in the best way possible whenever you see it on the field. 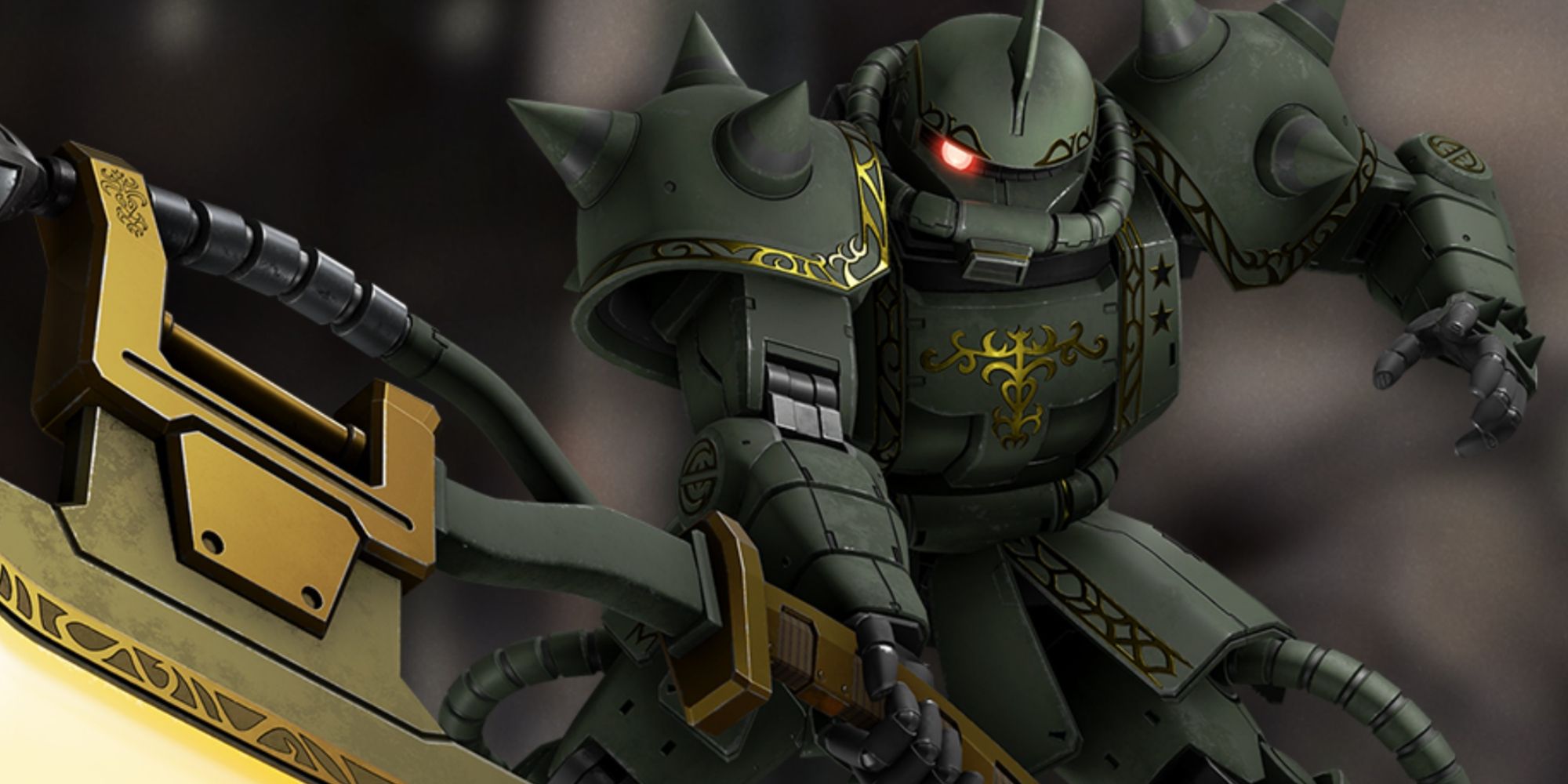 Remember the Zaku II Ranged variant from a ways back? This is it all grown up, fell old yet? Joking aside, this Unit is the aforementioned Melee variant of the Zaku II Mobile Suit, which we promised looked much better. And, as you can see, we weren't lying by any stretch.

It's surprising what color and decals can do, but this looks drastically better than the Ranged variant counterpart in every imaginable way. The gold and olive green are a match made in heaven, and the decal design is phenomenal. Pair that with the Large Heat Hawk axe, and you have one of the coolest-looking Units in Gundam Evolution. 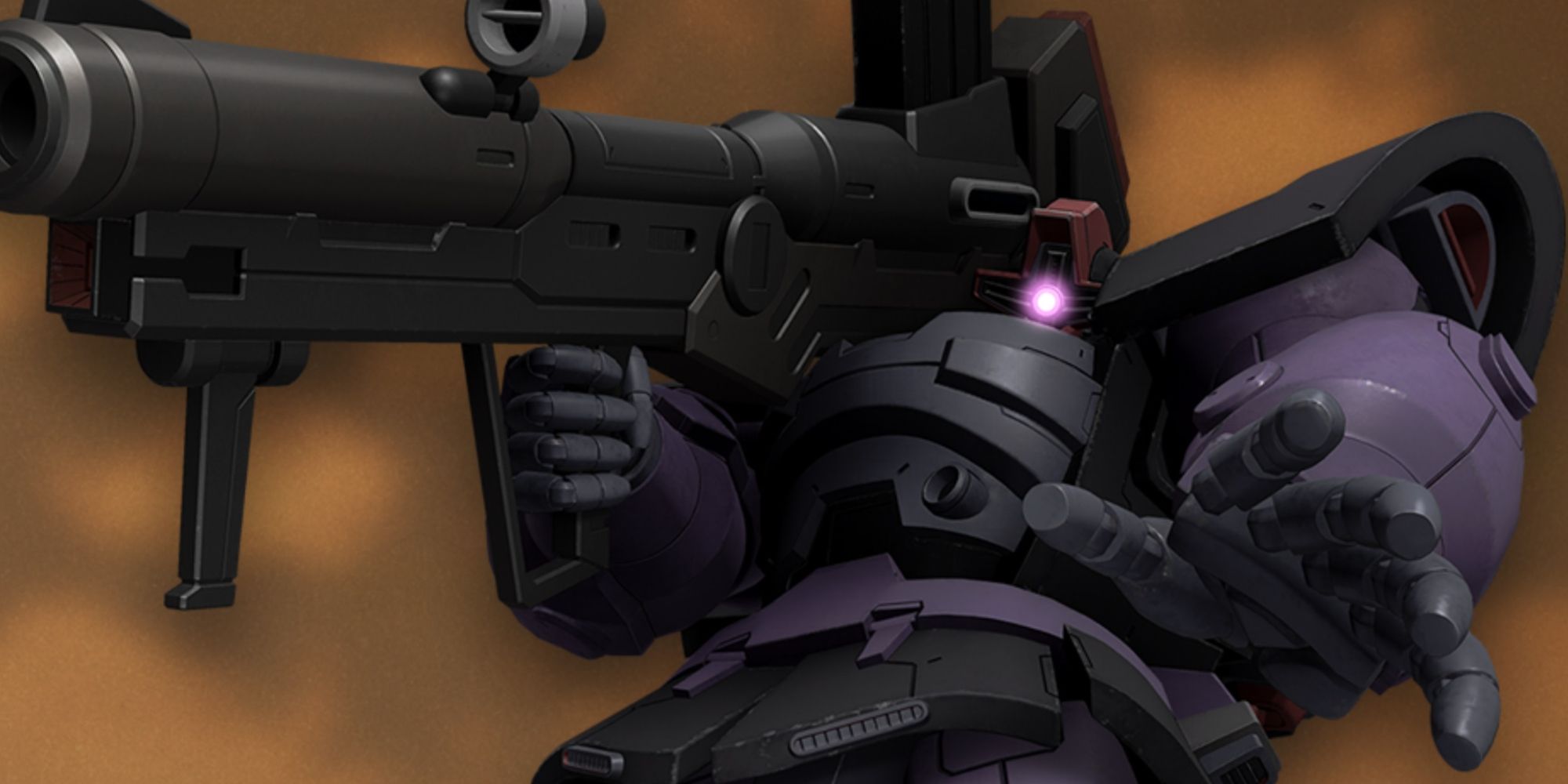 Kicking off our top three is the DOM Trooper Mobile Suit, which is the ultimate beefy Unit of the roster. If you thought the other Gundams were big, you haven't seen a thing compared to this absolute tank of a mech. And while its sheer size is impressive, so is its overall design, as it has many rounded and smooth pieces of armor that complement its wild helmet design.

This Gigachad wields the Giga-Launcher DR1 Multiplex as its primary weapon, allowing it to launch missiles at its opponent while being able to absorb a large amount of incoming damage themselves. The purple and black color scheme is also perfect. For being a hulking Unit, it looks absolutely phenomenal in all regards. 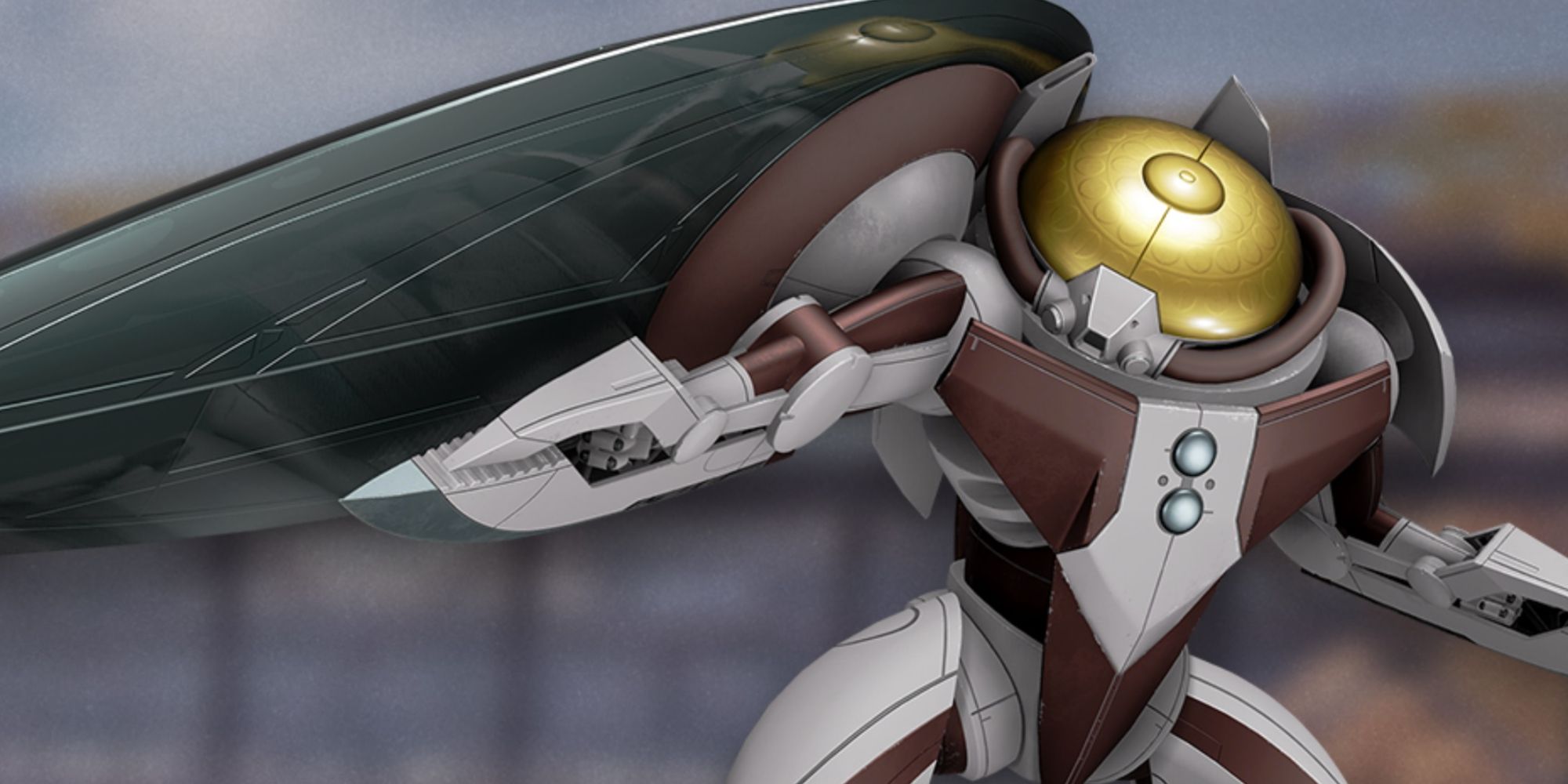 The Mahiroo Mobile Suit looks like a cross between Spider-Man's villain Mysterio and the Pokemon Scyther, and we wouldn't have it any other way. This bug-like Gundam has one of the best overall designs in the game and is by far one of the most unique.

A brown and white color scheme can either go very well or poorly; luckily, the Mahiroo Unit rocks this look as the placement of the colors do an excellent job at bringing out the Suit's finer details. We also love how this Unit uses the REN-DO Grenade Launcher as its primary weapon, which allows it to use its swiftness and slim body to cause significant distress to its opponent. 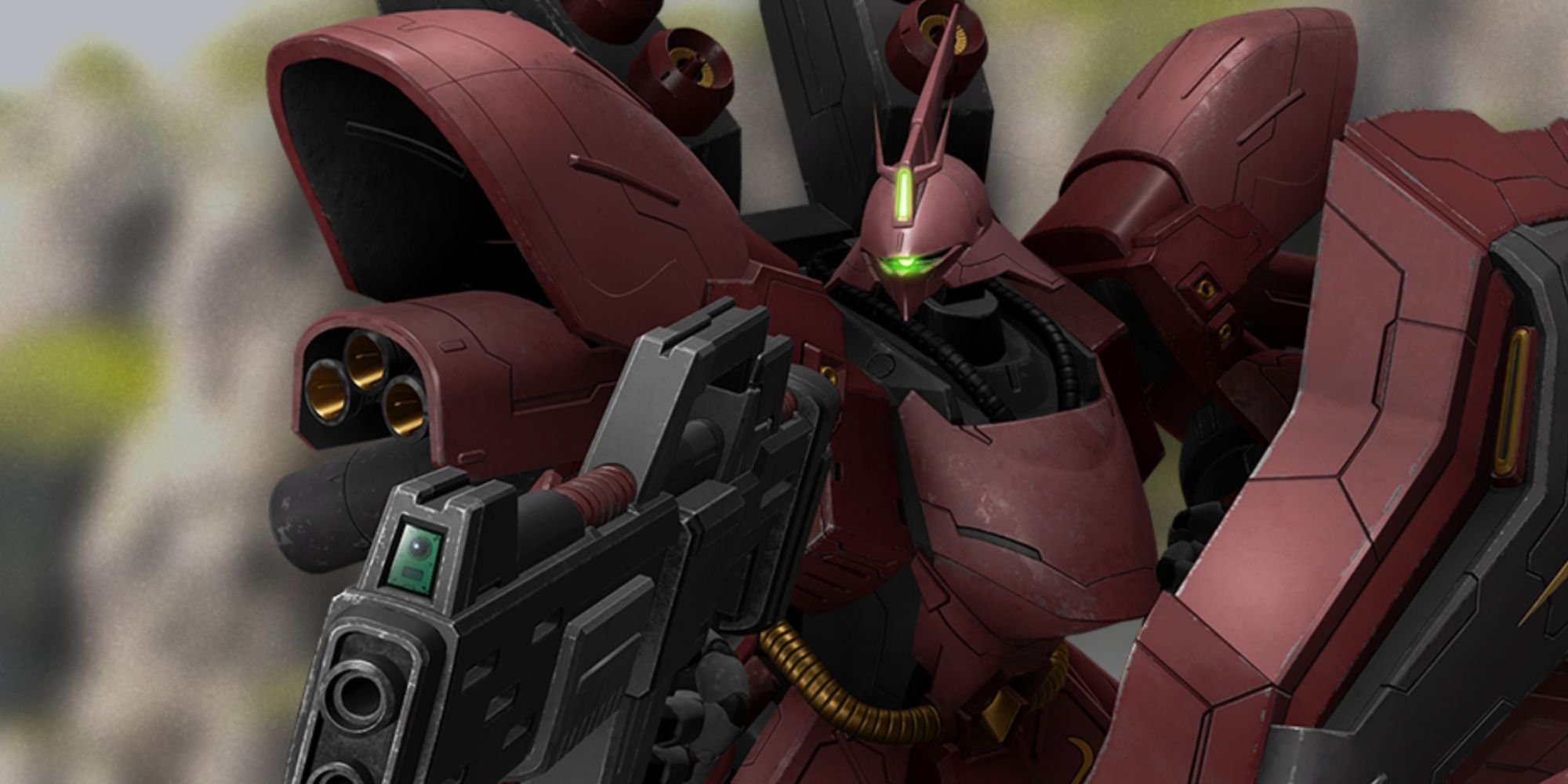 Lastly, we have the coolest-looking Gundam Unit in the game, which is Sazabi. Sazabi is the other samurai-inspired Mobile Suit we mentioned earlier and does everything better than the Marasai [UC] Unit and then some. Simply put, this Unit is badass looking and deserves the spotlight at number one.

Sazabi crushes the samurai look and has an excellent color scheme and kabuto, along with pronounced shoulders and a chest piece. Furthermore, like the Marasai [UC], this Unit has an uwa-obi as a belt, which goes a long way to sell its theme. This is just a cool and unique Gundam, which is powerful looking on and off the battlefield.