The holiday gaming events aren’t over yet, and GTA Online‘s contribution is an odd new off-road vehicle. The game is cruising along in 2020 with regular deliveries of new vehicles and casino prizes, even if some fans would rather hear news of GTA VI. The latest GTAO event bonuses and new products consist of an amphibious ATV vehicle, a new paint job for their car that looks like gift wrap, and several events that are paying out double and triple rewards.

The big new addition to the GTAO garage is the Rune Zhaba ATV. This beastly ride is made for going off-road with its giant tires. We’re not quite sure what the “amphibious” description entails. Does it actually float like those duck things? Or do the tires just allow for the driver to more easily traverse mud and sand? Players will have to pick up a Rune Zhaba to find out. 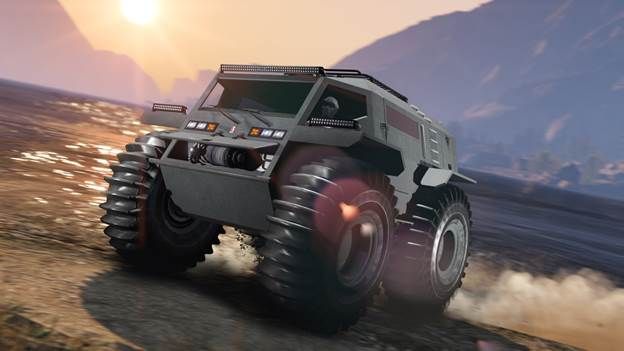 Meanwhile, those looking to avoid nature and party it up in the city will like the new prizes offered at The Diamond Casino & Resort. The grand prize for the Lucky Wheel is currently a customized Pfister Comet Safari covered in the “It’s a Wrap” Livery that makes it look like green wrapping paper. For the unlucky, Rockstar remembers that it’s a time of giving. Anyone who logs in before January 8 will get the “It’s a Wrap” Livery for free.

Unfortunately, the new year does bring one mundane aspect with it. The festivities in the real world are over, and it’s time to go back to work. Rockstar is trying to make that truth a little more palatable by making GTAO jobs more profitable. Playing Hunt the Beast, King of the Castle, or Criminal Damage will reward triple the usual amount. Business Battles and Bunker Series, meanwhile, are paying out double.

GTA VI is probably still a long time away. Rockstar fans can take solace in the fact that the developer is still giving love to GTAO. The company’s long-term plans might still be a mystery, but its current offerings are going strong.