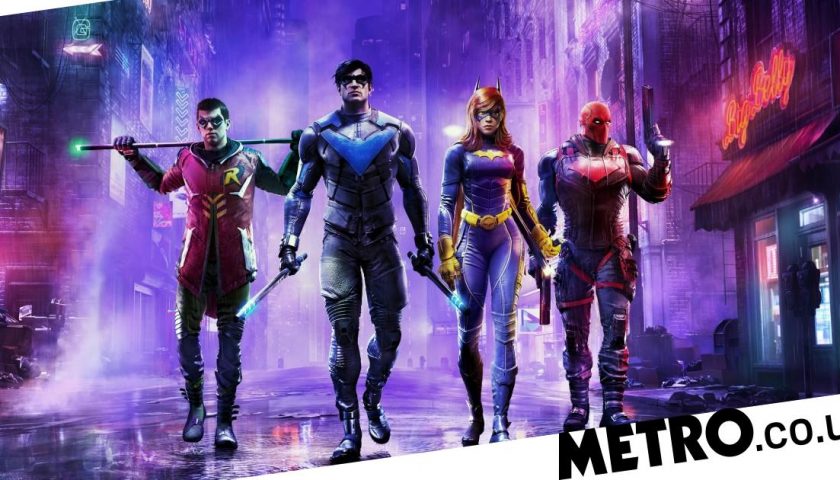 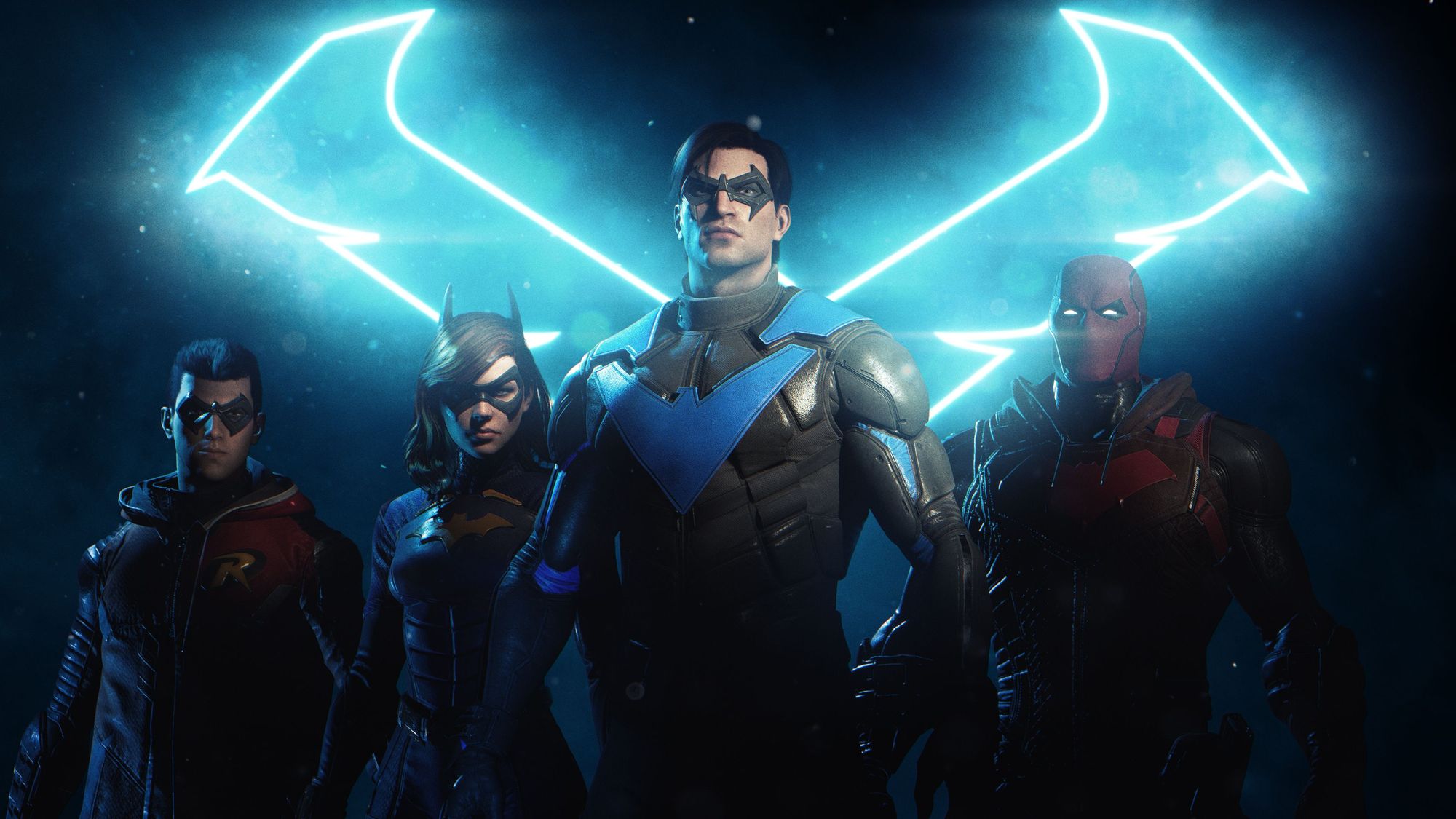 Batman’s former sidekicks are drafted in to protect Gotham City, in a co-op action role-player that has a lot to live up to.

It’s been seven years since Batman: Arkham Knight and while Gotham Knights isn’t set in the same continuity, the circumstances are eerily similar. Batman is seemingly killed at the end of Arkham Knight but his death is also the catalyst, by entirely different means, for the plot of Gotham Knights. As a result, instead of the Caped Crusader you spend your time playing as one of four members of the extended ‘Bat-Family’, namely Nightwing, Batgirl, Robin, and Red Hood.

It then falls to the dynamic quartet to investigate the mysteries that Batman was chasing in his final days, and which ultimately led to his downfall. Many of the same characters from the Arkham series also make an appearance in Gotham Knights, including Ra’s al Ghul, Mr Freeze, and Harley Quinn – the latter of which sends you on a wild goose chase around the city, deciphering her clues.

Although the storytelling does have several highlights, if you don’t know your Batman lore going into the game the initial set-up can be extremely confusing – especially as most of the Bat-Family have never been in a movie before. Bizarrely, there’s absolutely no explanation for who any of them are (Nightwing and Red Hood are both ex-Robins) until relatively late in the game or what key plot elements such as a Lazarus Pit are.

Once you find your feet though, things do start to make sense and the characters begin explaining the deep lore surrounding the events of the game and what has happened previously. This doesn’t happen until about 10 hours in though, which seems like a weird move for a game that has an original story and must surely realise most people don’t know who any of these characters are.

What’s also odd is that the game makes no attempt to encourage you to change characters, leaving it unclear whether you’re expected to play as just one for the entire time or constantly keep swapping between them. We played primarily as Batgirl, whose abilities are closest to Batman from the Arkham games, but technically you can chop and change at any time.

Batgirl is the group’s tech expert but she’s also a good all-rounder when it comes to stealth and melee combat, as she flits from perch to perch before performing silent takedowns or chaining together attacks in lengthy combos. The others have different specialities, with Nightwing relying on speed and acrobatic skills, Robin on stealth, and Red Hood, who doesn’t have the same inhibitions about killing as the others, being best at ranged combat.

Whilst these characters are good fun to learn and play, there’s no compensating for how disappointing the combat system is as a whole. There is no way to manually target a specific enemy and you must simply rely on the game doing it automatically for you. That generally works fine for melee combat but it’s terrible for range attacks, where the game will happily let you face the opposite direction to a crowd of enemies and waste all your batarangs throwing them at a nearby lamppost.

It’s understandable that developer WB Games Montréal, who made Arkham Origins but not any of the other Arkham titles, would want to do something different in terms of combat but the action here, while okay, feels loose and unsatisfying, with nothing like the same crunching rhythm of Rocksteady’s games.

Gotham Knights has had a long and tortured route to release, with reports of multiple cancelled Batman games before this one was even announced. That seems very evident when you play the game, which feels like two or three entirely different titles, or at least opposing ideas, all forced to work together as one.

The story is engaging, and not nearly as grimdark as you might imagine, but the amount of extra content, side quests, challenges, crafting, and other tasks can become overwhelming. Rather than becoming bored at the lack of variety the key danger with Gotham Knights is being exhausted at the endless busywork and side missions.

The core idea behind this is a good one though, in that rather than setting out on a linear series of missions you’re frequently going out on patrol in order to encounter random street punks, that you can interrogate in order to find out clues about other more serious crimes – that then lead to scripted encounters.

This is a neat idea, that’s much closer to the way Batman is supposed to operate, and it’s combined with a number of detective sequences which, although very simple in gameplay terms, are good scene setters and show that Gotham Knights is not afraid to slow things down in order to build atmosphere.

Challenges are set out in order to either gain experience points or unlock certain craftable items – technically the game is an action role-player, with attacks on enemies accompanied by, not kapows and thwacks, but increasingly large numbers. As if you’re taking on the Gotham underworld with the power of maths.

The craftable equipment includes things like a cape to glide across the city or a new suit style, but this process isn’t made very clear and the system doesn’t offer a way to track these easily. Side quests are clearly marked on the map and are entirely optional, but what the game could make clearer is that by completing these you’re also ticking off challenges as a by-product – meaning that you can level up your character much more quickly than it first appears.

The key new feature of Gotham Knights, when compared to the Arkham games, is the two-player co-op option (a four-player competitive mode is coming later as DLC). This works very well, with the game compensating for players that aren’t at the same spot in the story and ensuring they don’t have to repeat missions if they go back to their own game. Although, annoyingly, this doesn’t apply to smaller tasks like scanning drones to unlock fast travel points.

There’s a lot of good stuff in Gotham Knights and, despite a peculiar opening (featuring the worst Batman voice since Christian Bale), makes a much better first impression than you might expect, after all the bad publicity surrounding the game being only 30fps. The reason the combat is so underwhelming is a design issue though, not a technical one, and that goes for all the game’s other faults.

In terms of the core combat and stealth gameplay this is unquestionably inferior to the Arkham games and, despite some positive ideas, is a clear backwards step from that series as a whole. The co-op, customisation, and detective elements are all welcome inclusions but in terms of the action, that is the beating heart of the game, this is more Batfink than Batman.

In Short: Simultaneously better and worse than you’d expect, with some fun co-op and detective elements but weak combat and muddled storytelling.

Pros: The four characters all have distinct abilities and uses, with lots of customisation options. Fun co-op works surprisingly well given the complex mission structure.

Cons: Fights and stealth are nowhere near as entertaining as the Arkham games and it’s 10 hours into the game before it explains who anyone is or what they’re doing.