Prolific tabletop roleplaying game content creator Goodman Games recently announced Dungeon Denizens, its next fifth edition sourcebook that will contain over 500 fantasy creatures for GMs to stock up their adventures with. Dungeon Denizens is currently scheduled for a mid-2021 publication date.

Dungeon Denizens info is still basic at the moment, with the official announcement on the Goodman Games’ website reprinting the blurb from the back cover of the sourcebook. However, the announcement does also point to the Bride of Cyclops Con – What’s New With Goodman Games video on the company’s YouTube channel as having a little more Dungeon Denizens info in it, beginning at the 42:50:00 mark.

According to the announcement slash blurb, Dungeon Denizens is “a diverse collection of monsters suitable for any 5th edition campaign.” A whopping 300 of the monsters within have been corralled from Goodman Games’ past 20 years of TTRPG content and updated for fifth edition use. Another impressive 200 monsters “are brand new, never-before-published creatures, ready to be unleashed on your unsuspecting players.” These creatures will cover the full list of creature types, containing both malevolent and magnanimous monsters from many natural and unnatural locations. 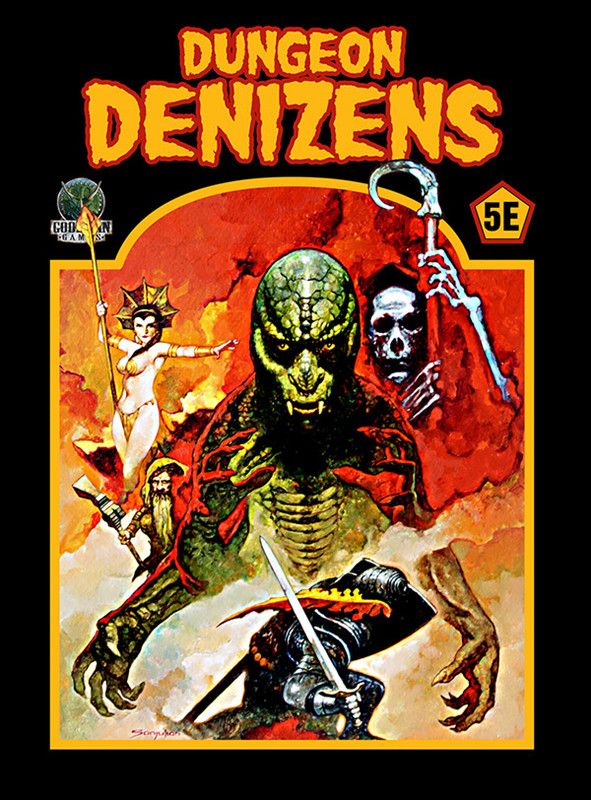 The sourcebook will also handily have the creatures categorized by challenge rating, and every creature page will contain “brand-new full-color art, fully developed 5th edition statistics, plus notes on ecology, evocative lore, and tactics.” Additionally, new spells and magic items that compliment many of the creatures will be detailed throughout the sourcebook, along with expected recommended creature treasure hoard items and suggested encounter groups.

The announcement directly lists by name a few of the creatures you can expect to see in Dungeon Denizens:

Also accompanying the descriptions of many of these creatures will be “inspiring tips, bits, and quips from the celebrated characters of the Goodman Games milieu of products.” That reads as if the sourcebook will be written in a style similar to what Wizards of the Coast used in Mordenkainen’s Tome of Foes, Volo’s Guide to Monsters, and Xanathar’s Guide to Everything. If that is so, it’s certainly something to look forward to, especially for those of us who aren’t familiar as we’d like to be with Goodman Games’ characters.