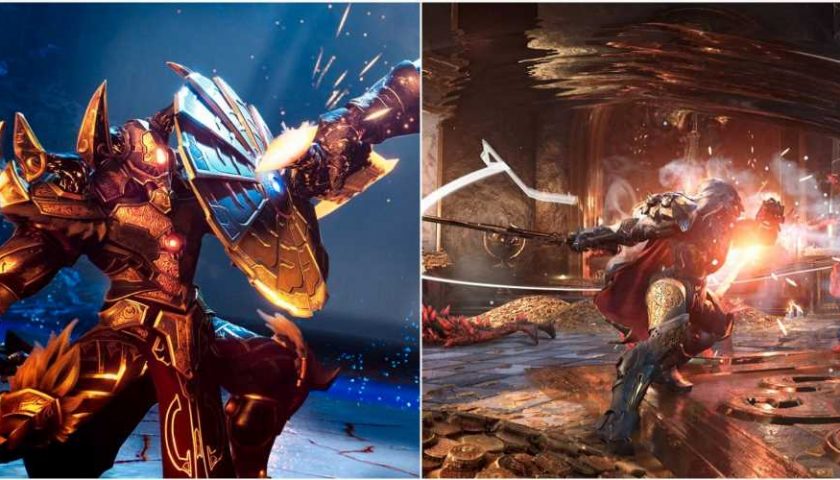 Godfall is a kind-of futuristic, sort-of fantasy-styled looter hack-and-slash that puts you in the shoes of Orin, a near-godlike being on a quest to stop his brother from taking that final step into actual Godhood. There’s a lot of looting, a lot of killing, and a lot of systems locked behind a lot of jargon and combat.

What’s Soul Shatter? How do I use Archon Fury? What’s a Seventh Sanctum, and where are the other six? It’s all over the place, and we aim to get most, if not all, of your questions answered in this handy-dandy combat guide. It’s time to whoop Macros and his cronies. 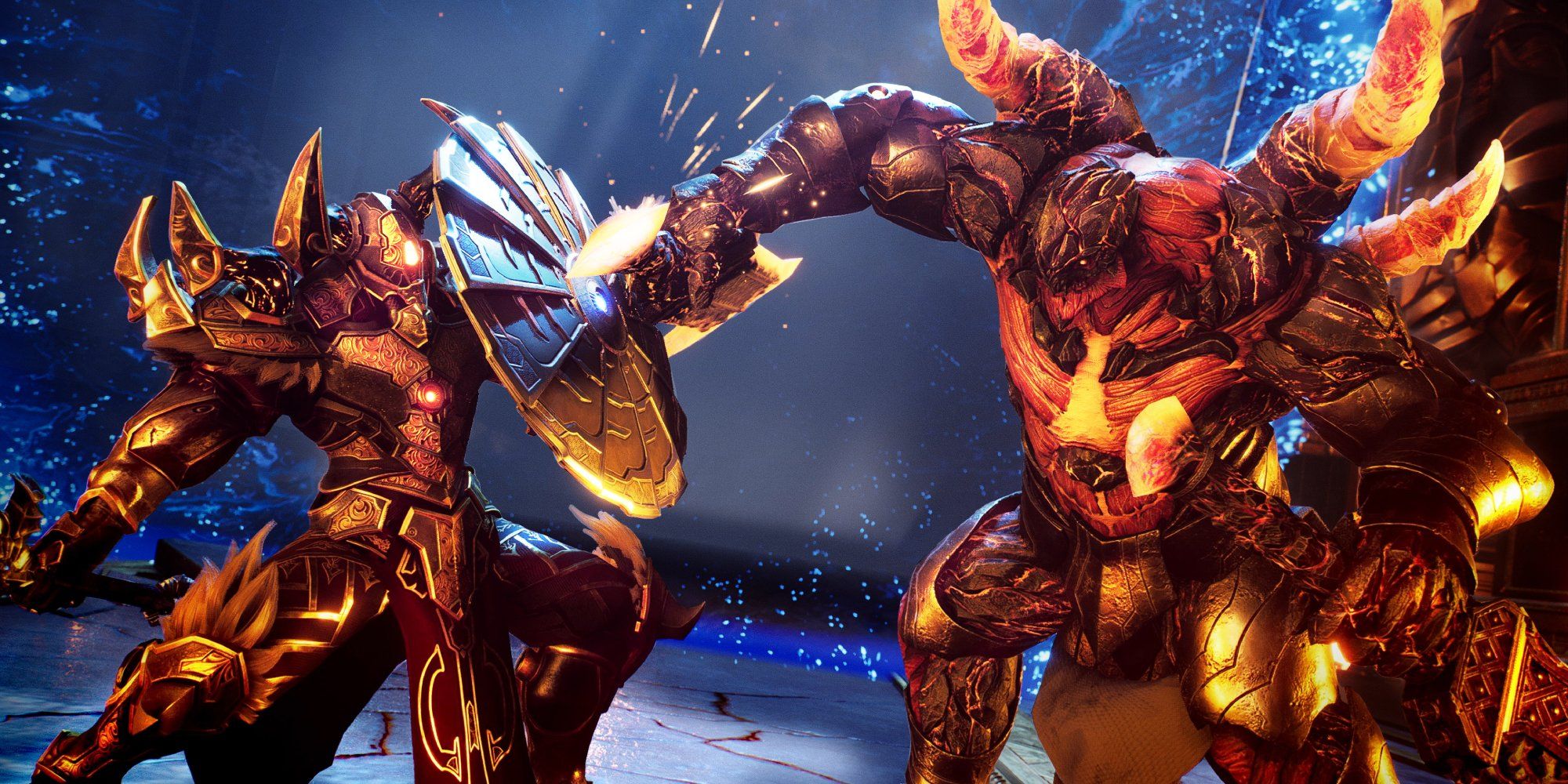 Before you can go about killing everything that moves, you should probably try and stay alive. Thankfully, Godfall has quite the defensive toolkit for you to mess around with. If you want to stay healthy, there are more than enough systems in place to make you practically unkillable.

The easiest to nail is the simple block. Blocking negates any damage you would have taken had you not been blocking. It really is that simple.

Be aware that blocking is not infallible, however. Some enemies have attacks that can ignore your block entirely, and some just straight-up grab you and yeet you across the arena. These attacks are highlighted in Red.

If you want to get fancy with your blocking, then you can instead opt to parry enemies. Parrying is like blocking, only objectively better in just about every situation. Instead of tanking a hit, you stagger the attacking enemy and can follow up with your own attacks and takedowns.

This is especially handy when fighting ranged opponents, as you will reflect any projectile at the sender, stunning them and dealing high damage.

What makes Godfall’s parry system so useful, is the ease with which you can use it. The window is incredibly generous and providing you hit the button when enemies flash to signify their attack, you will parry successfully.

Blocking and parrying are all well and good, but you can’t use these techniques against everything. Heck, sometimes you might just be facing the wrong way when some Chad bonks you on the dome. It’s a situation you will get yourself into, and there is only one way to escape it – dodging.

Dodging allows Orin to avoid any and all damage that would otherwise chunk your HP. Nimble passing through enemy attacks is required whenever they flash red. Unlike parrying, however, dodging has a tighter time window to pull it off. If you are too early, or too late, you will get hit. 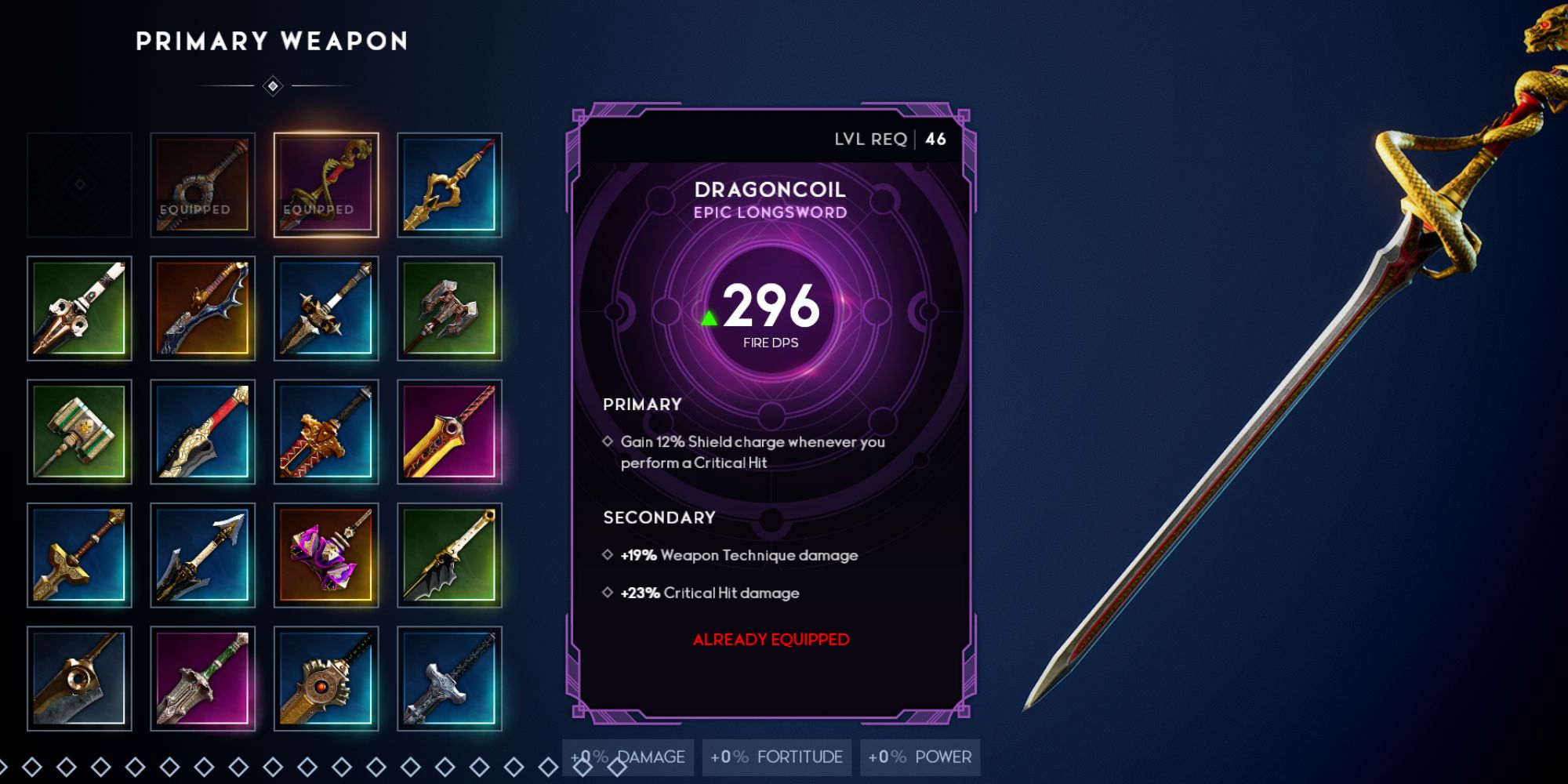 There is a huge stats screen that operates in the background of Godfall. You can even view it if you want a detailed explanation of everything going on. When you are first starting you don’t need to worry about all of that – you just need to focus on the color-coded stats that dictate everything else:

In short, Might determines your damage, Vitality increases your health, and Spirit reduces your cooldowns. As you level up and equip better gear, these stats will increase, and you, in turn, will become more powerful. You can even upgrade your equipment, to push your powers to even greater heights.

How To Attack Effectively

Stats and defense are all well and good, but if you aren’t attacking, you won’t get very far. Godfall is fairly accessible with its combat whilst still having a decent number of attacks to play around with.

These are your go-to attacks. They are quick, they can combo together, and they deal decent damage. Depending on your weapon, you might be vulnerable to counterattacks, so you can’t just spam these attacks. On top of that, Light Attacks won’t always stun-lock opponents.

Heavy Attacks are much slower than Light Attacks, deal more damage, stagger more easily, and can be charged up to increase their effectiveness. Heavy Attacks can also “Breach” enemies, leaving them open to devastating “Takedowns”.

Breaching enemies is as simple as filling up the yellow bar under their HP. Once maxed, they are defenseless for a while, and vulnerable to attacks.

Each weapon type comes with two unique attacks called Weapon “Techniques”. These are split into two categories – North and South – and can do everything from buff your attacks, to dealing massive damage, to inflicting status ailments. As you attack, you will fill a meter. Once maxed, you can unleash these powerful attacks.

These attacks can sometimes have long windups, and you are vulnerable to attacks the entire time. Make sure to time your Weapon Techniques appropriately.

Your shield isn’t just for blocking. In fact, Godfall lets you throw your shield like Captain America, bouncing it off enemies and sometimes even knocking them down. You don’t have many ranged options in Godfall, so making use of your most accessible is a must. It deals damage, crowd controls, and looks cool. It does come with a cooldown period between throws, however, so don’t waste it.

What Is Soul Shatter? 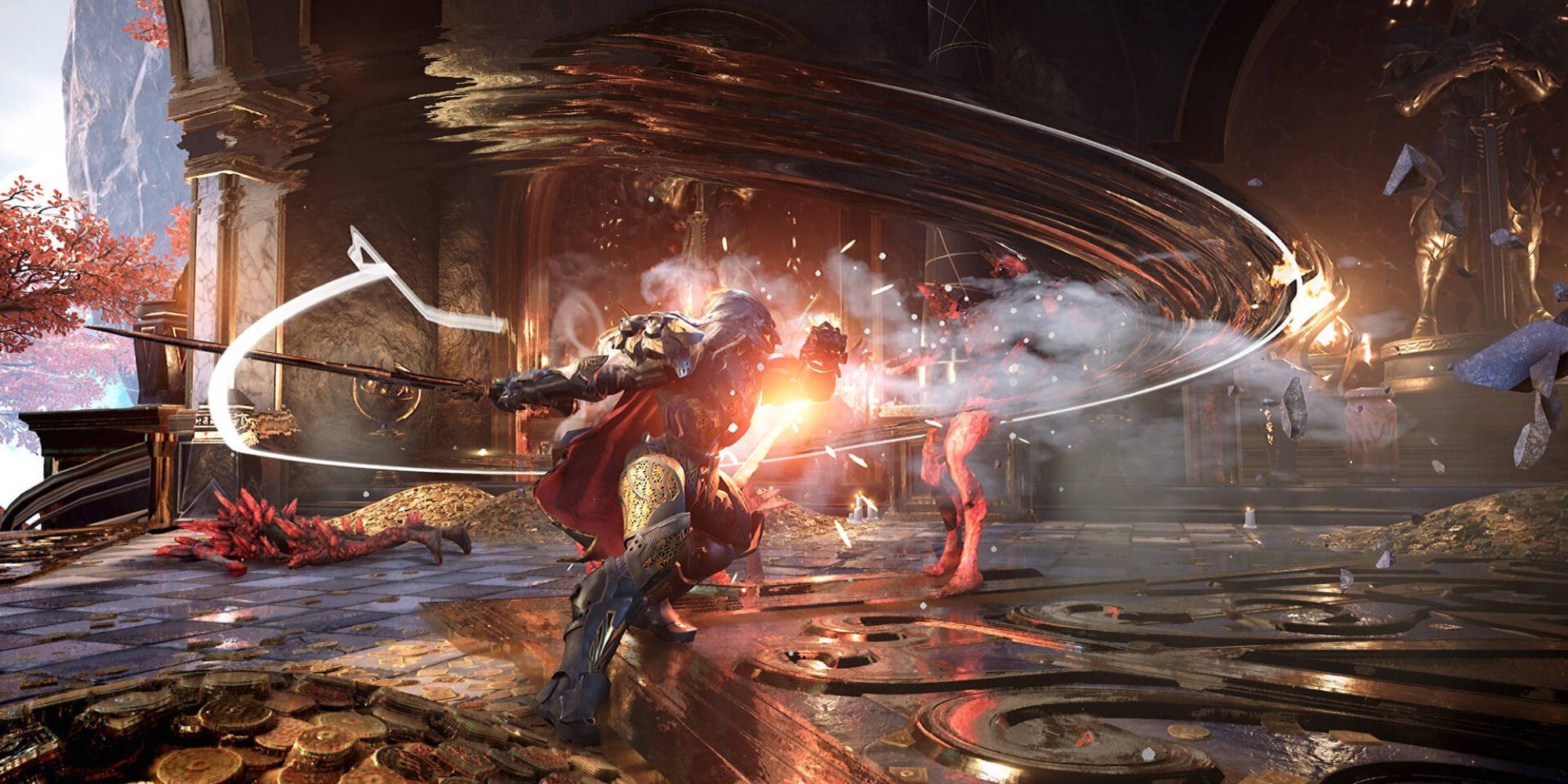 In Godfall, hitting enemies with Light Attacks won’t exactly kill enemies effectively. Sure, they will take damage, but that damage is represented by a grey bar. You will have to deplete the enemy's health and this additional bar of grey health to kill anything.

This is where Soul Shatter comes into play. If you land a Heavy Attack, then any grey health is immediately removed – no matter how much they may have. If an enemy were to die because of this, they explode.

To effectively kill enemies then, you want to land Light Attacks to fill their HP with grey health, then finish them with a Heavy Attack to trigger Soul Shatter. Many weapons and abilities trigger off Soul Shatter, and it’s entirely possible that you could cause a devastating chain reaction, killing multiple enemies at once. 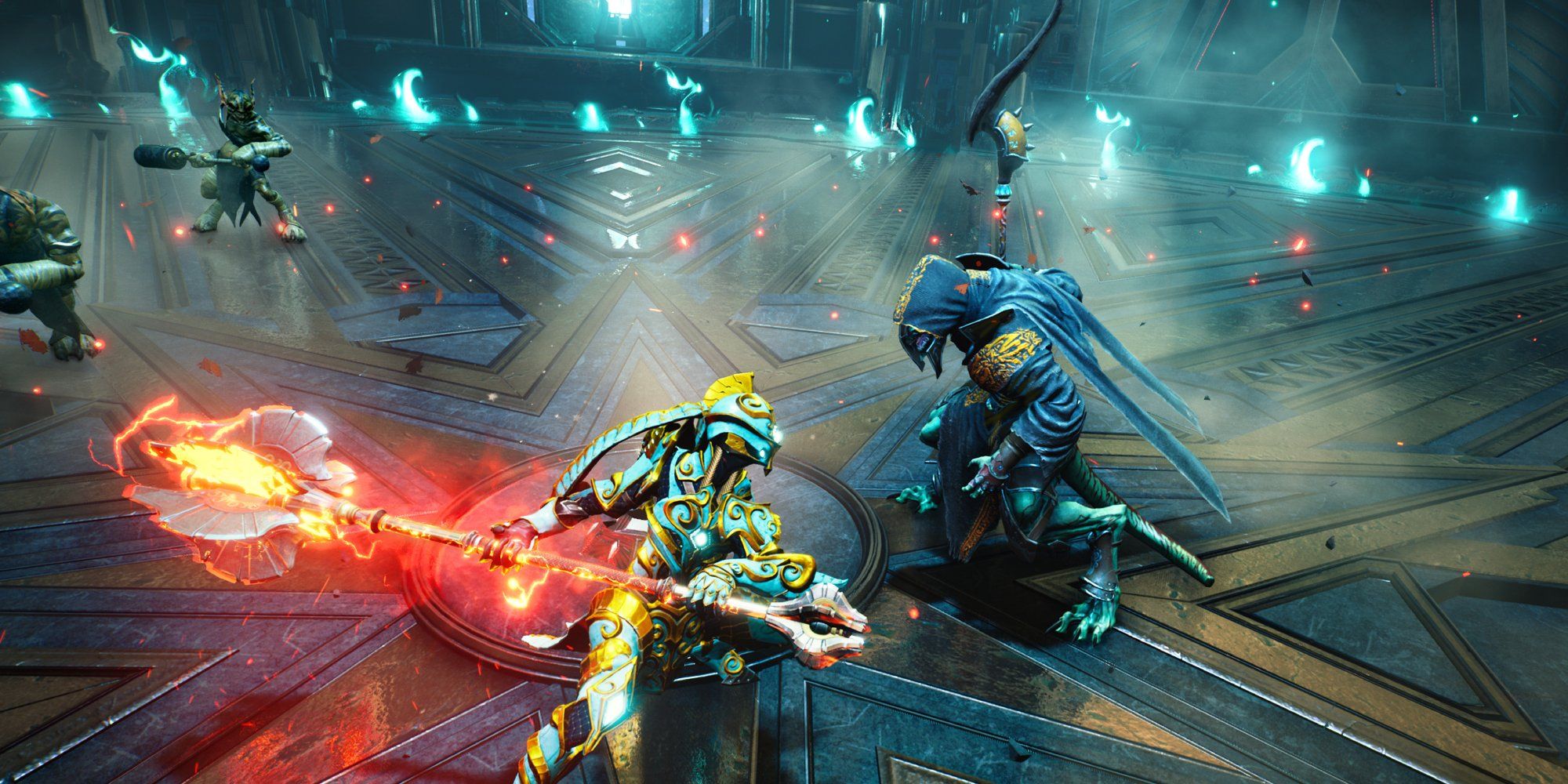 Leveling up increases your stats and allows you to wear better gear – but that’s not all. You will also gain “Skill Points” that you can spend to unlock and upgrade, well, Skills. Some of these Skills are passive, like an increase in your Might. Others unlock new abilities to use in combat.

These abilities are not to be underestimated, and they can greatly expand your toolkit. You can unlock new ways to throw your shield, entirely new systems, like Polarity Attacks or Timing Attacks, and you can upgrade each Skill “node” multiple times to further expand your abilities. 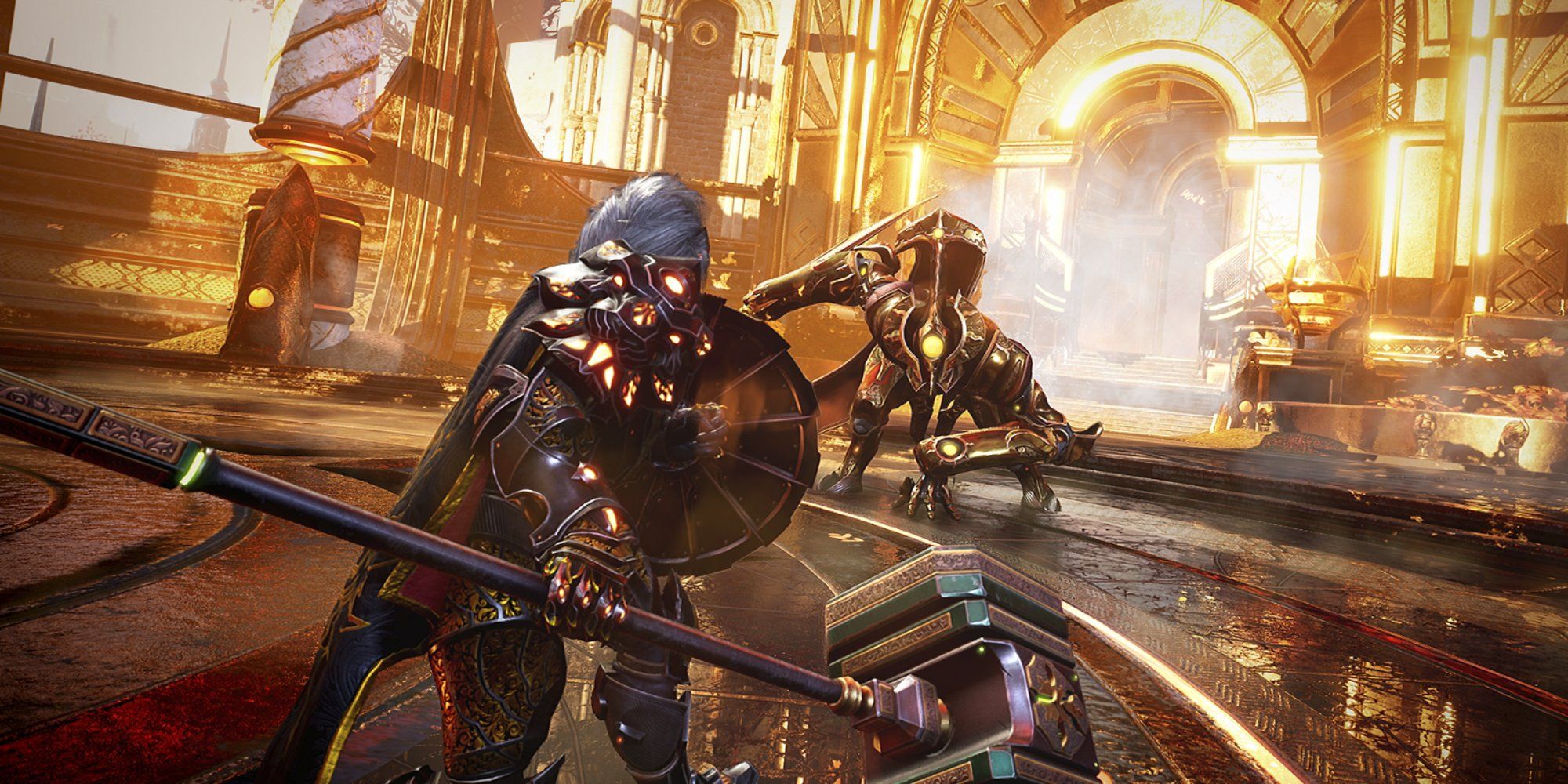 Archon Fury is the hyper-state you can access once your Archon’s Fury meter has filled up. What Archon Fury does varies based on what Valorplate you are currently using, but they all share some key characteristics. For example, being impervious to damage, dealing more damage, and being able to land Soul Shatters easier.

If you are in a tricky spot, then Archon’s Fury is normally the answer. It’s your, “get out of jail free” card, and keeping that meter filled for a rainy day can really turn the tide of an encounter.